A Theater Thinks Inside The Box: Peeking In On A Pandemic - 27 East 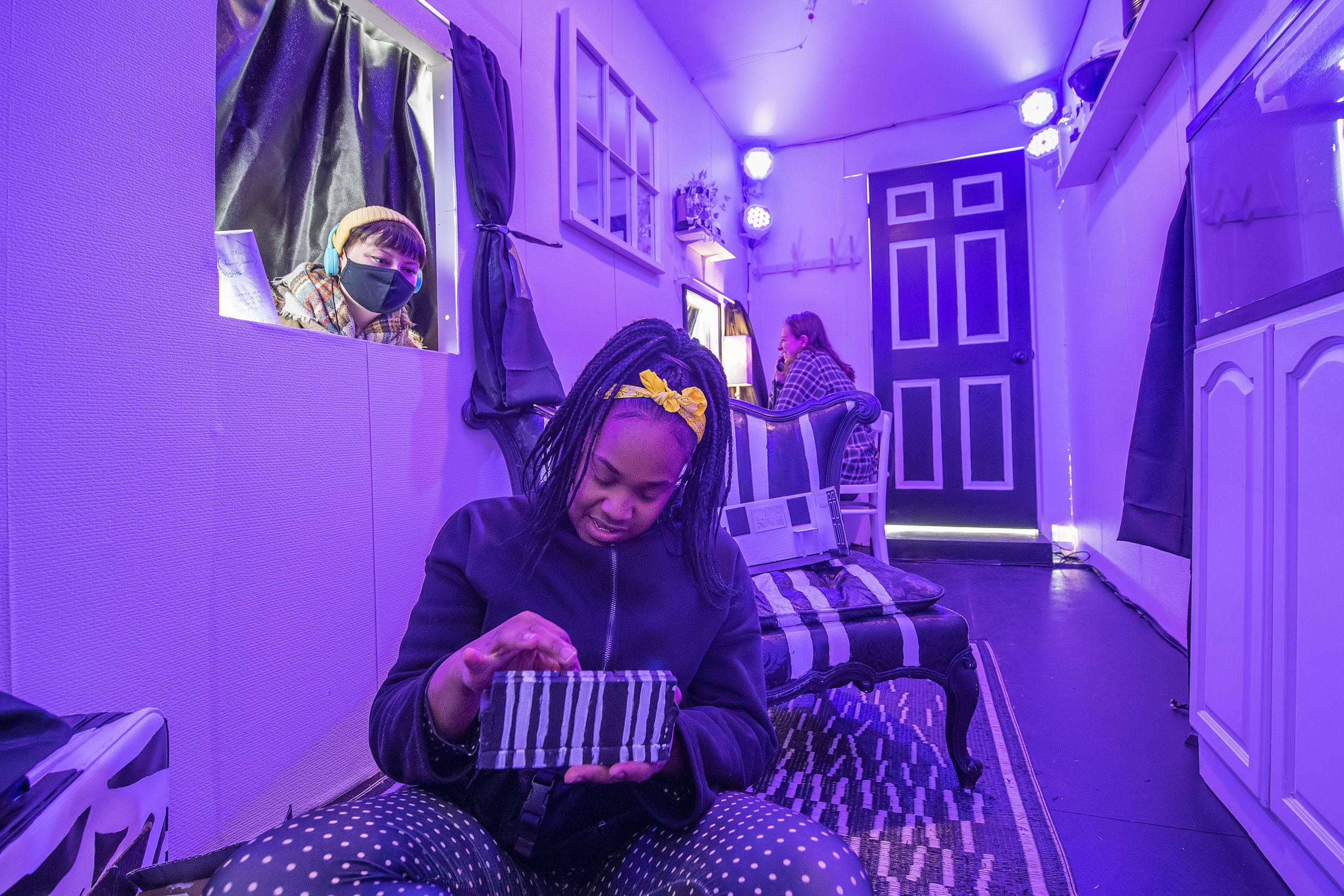 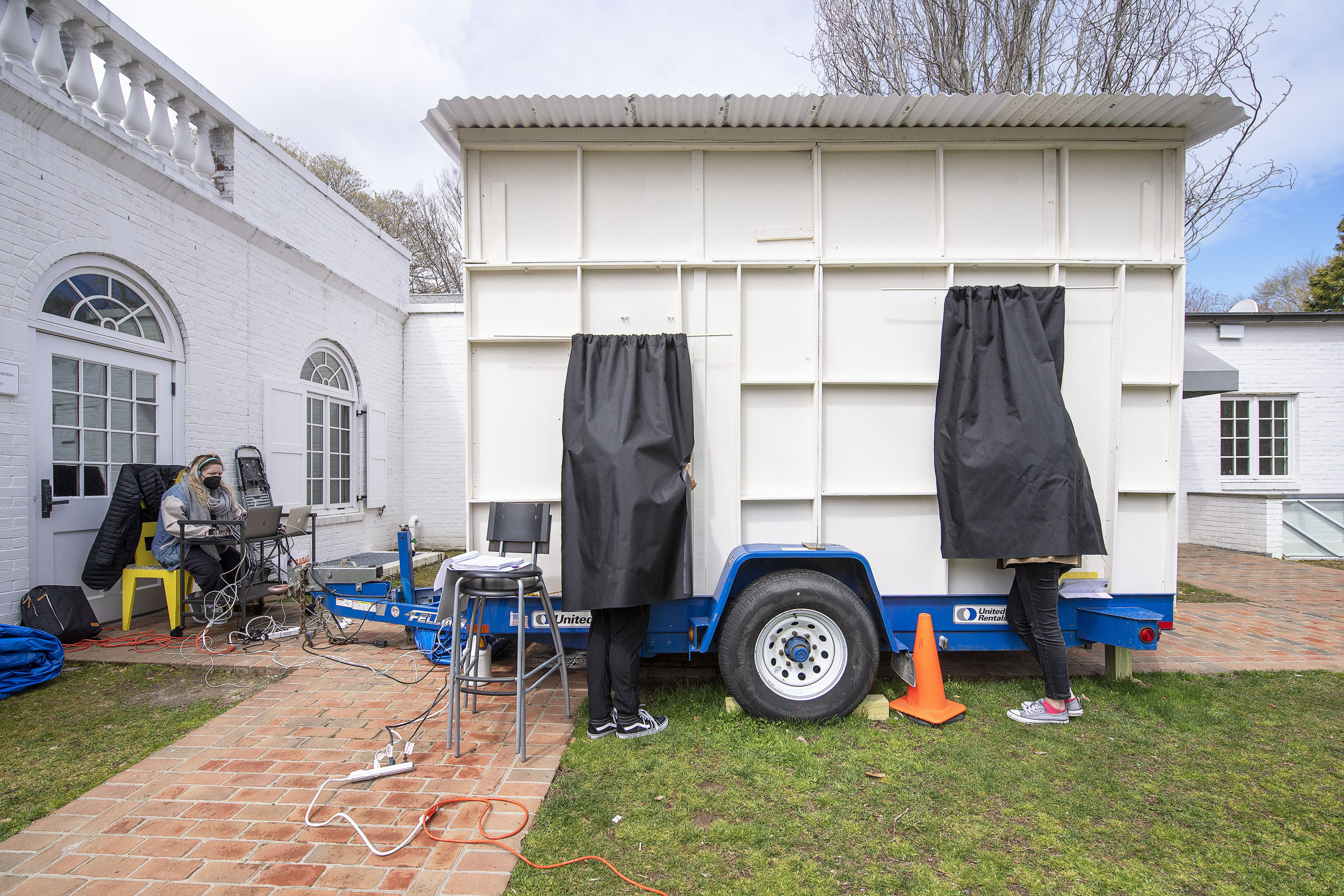 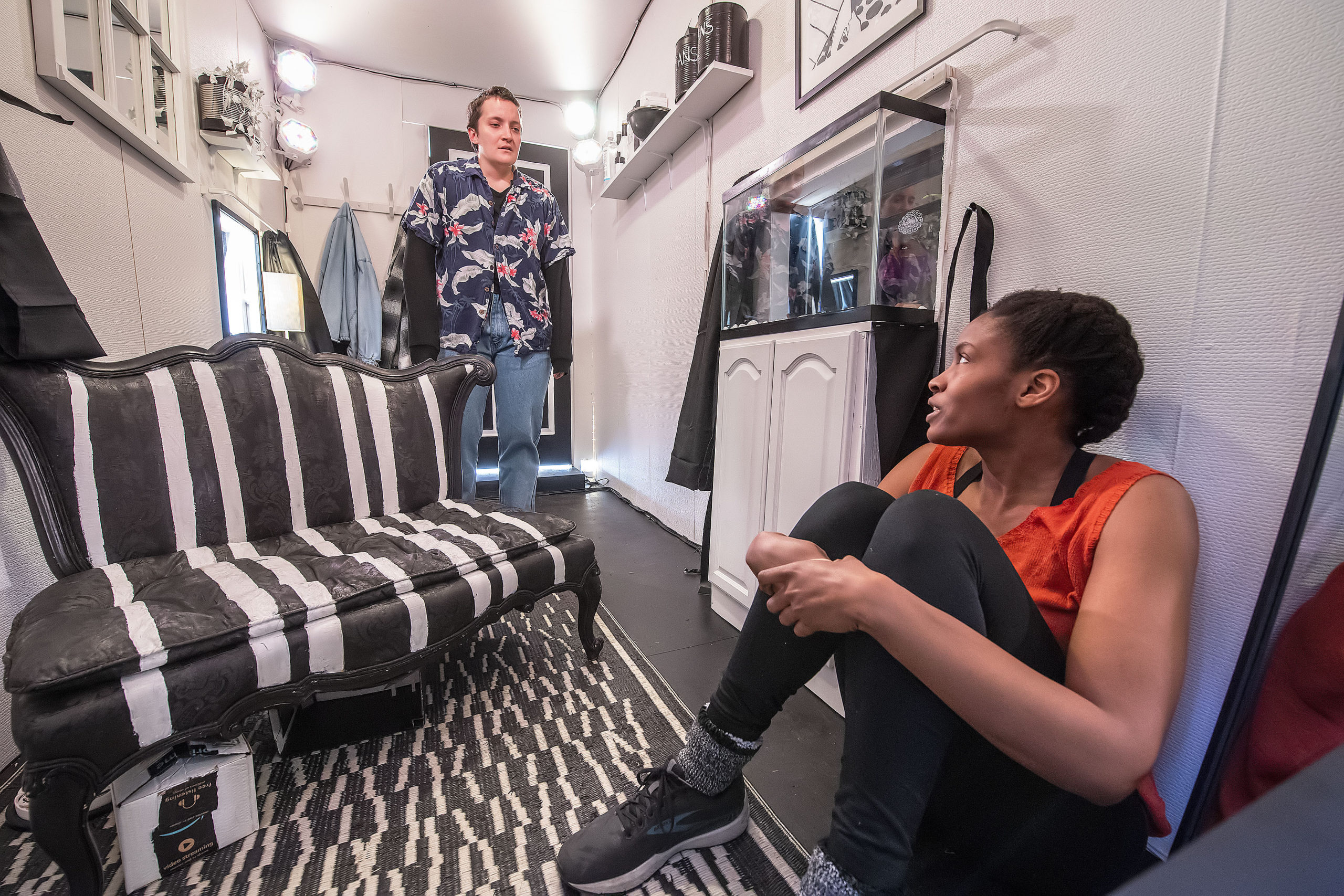 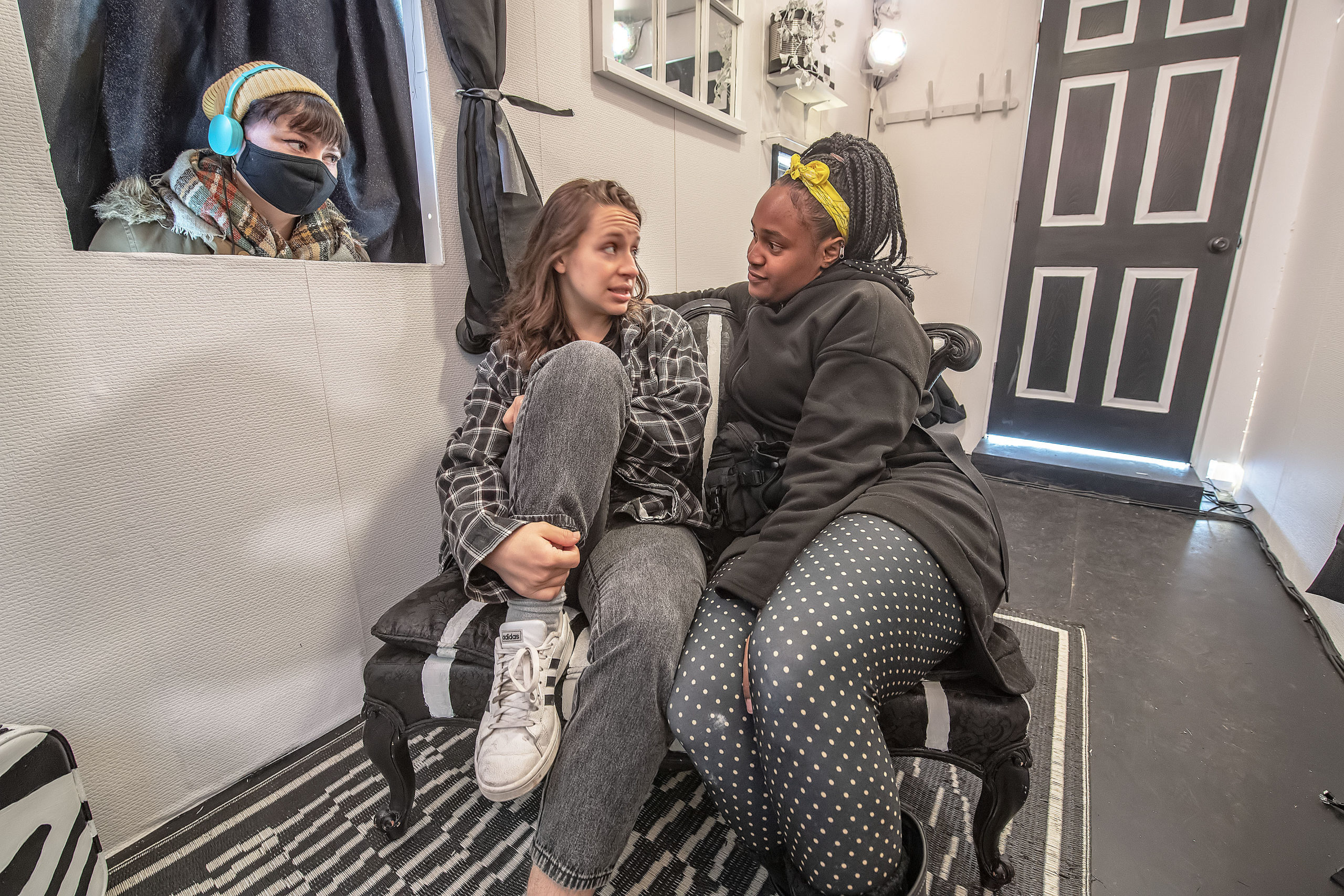 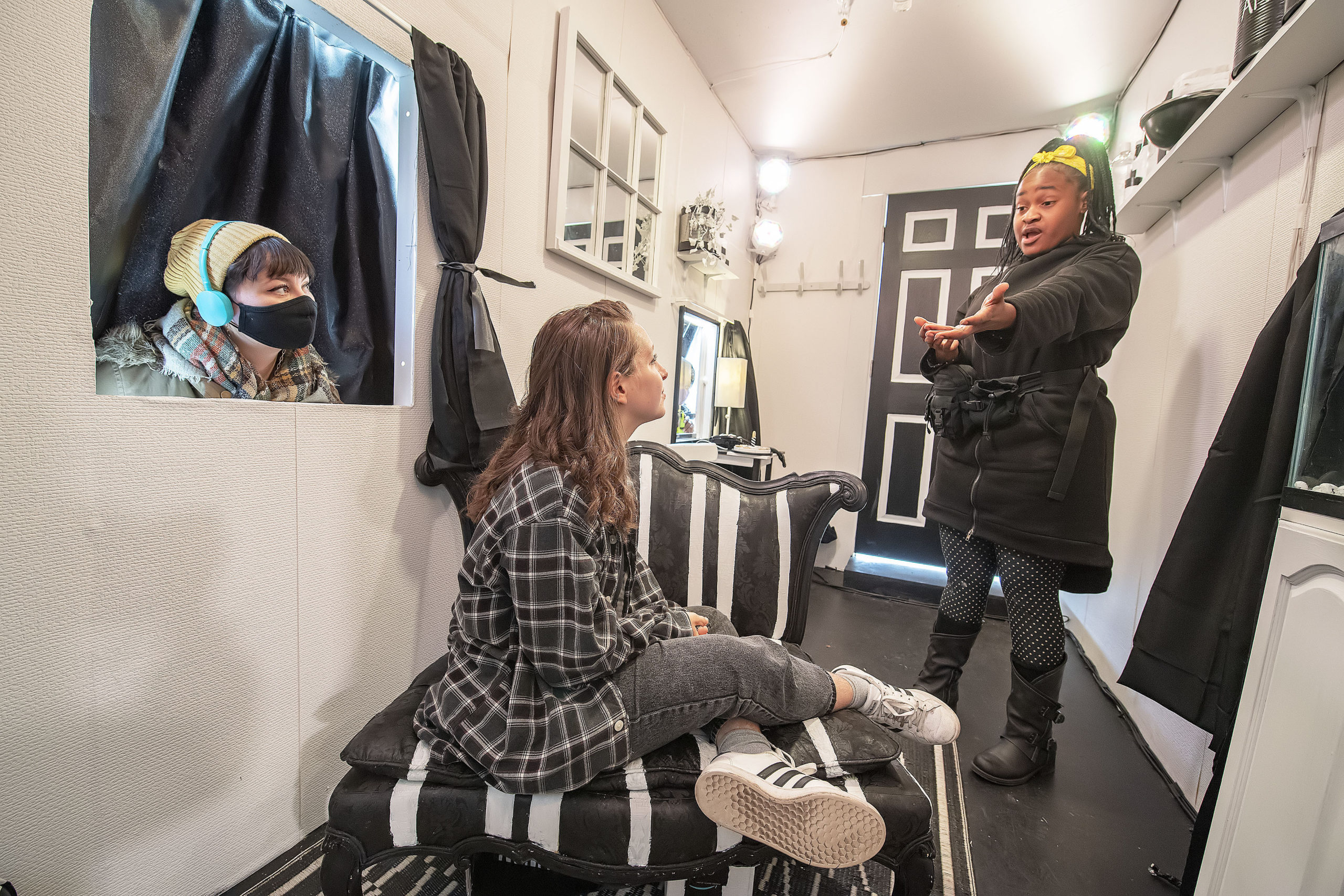 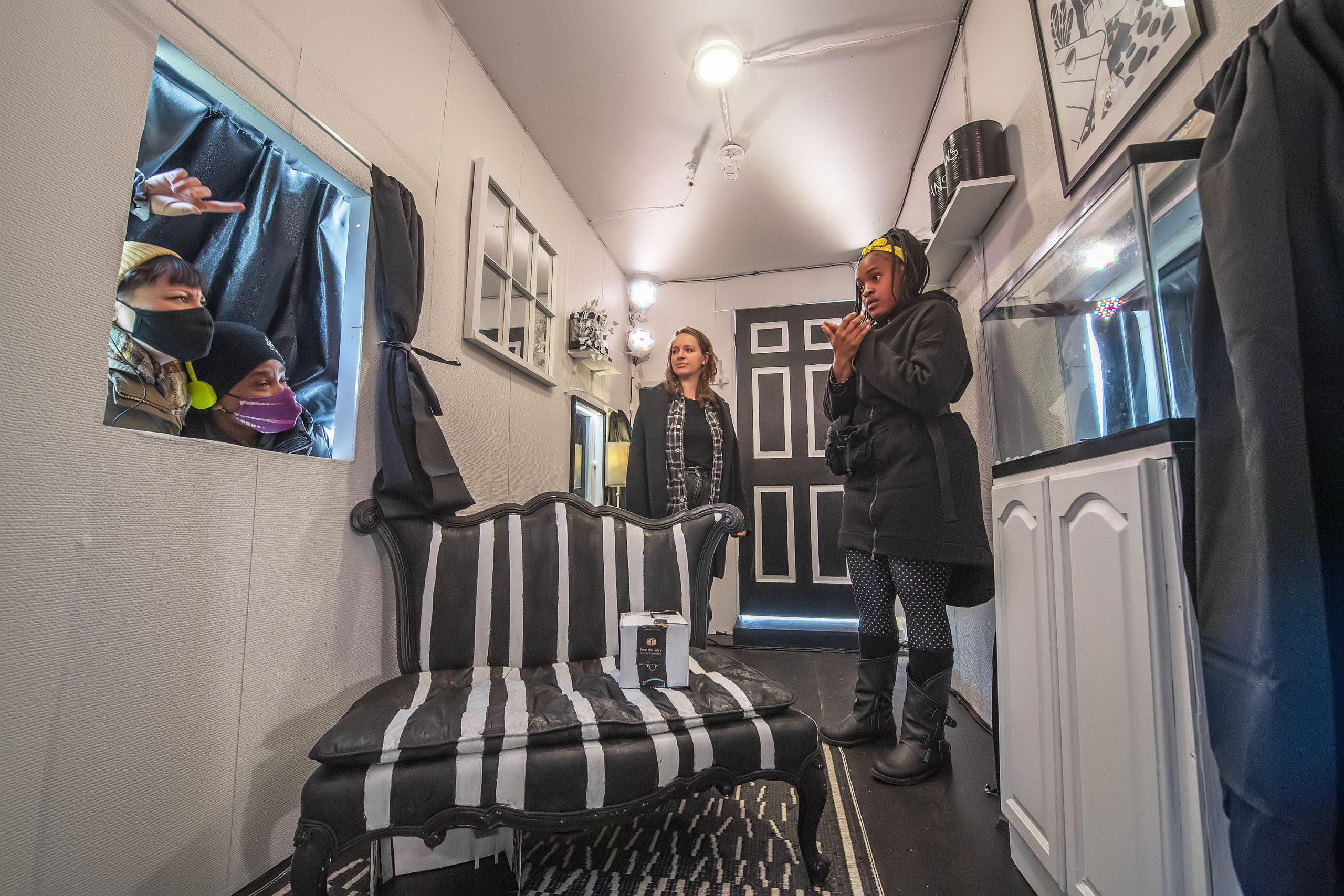 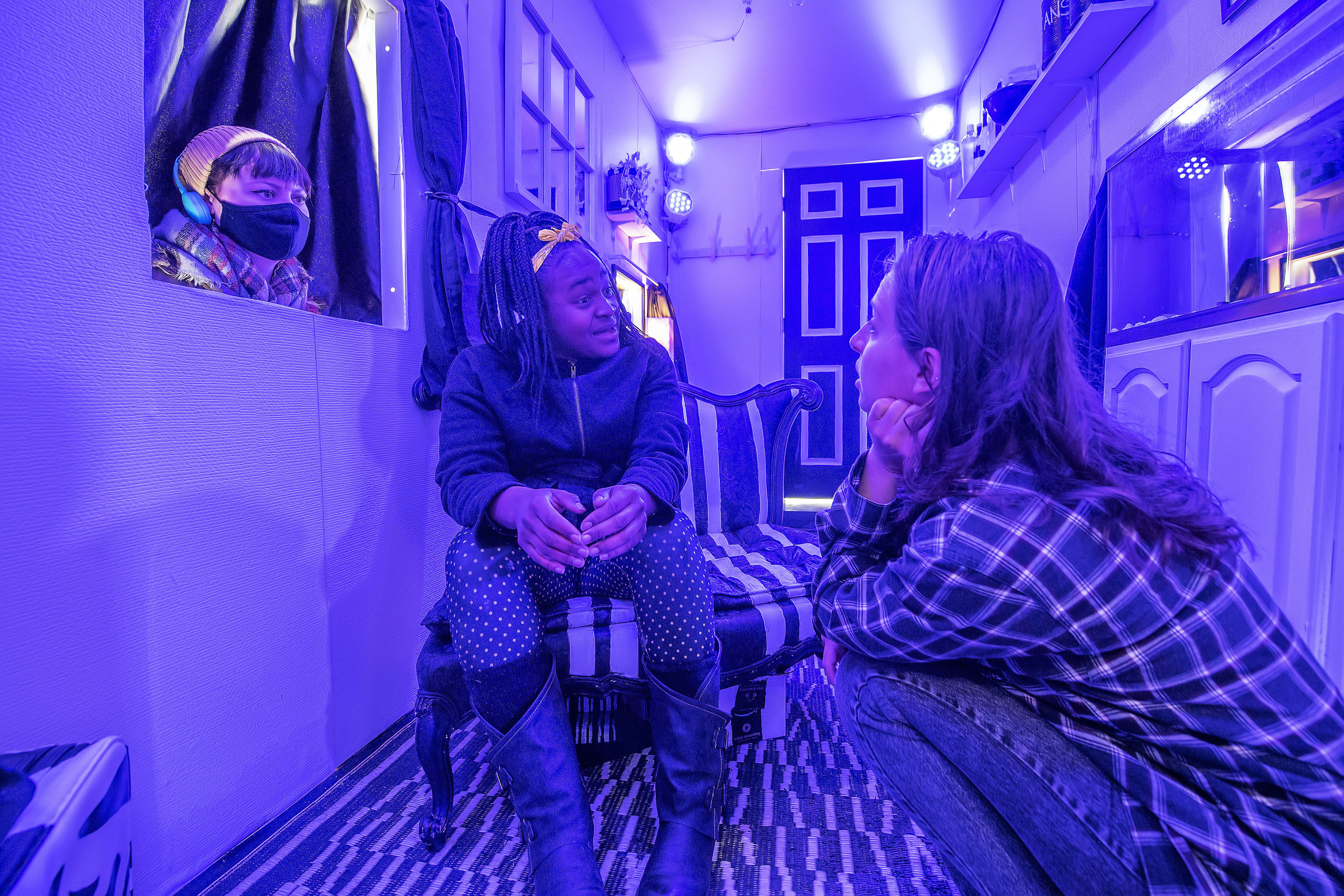 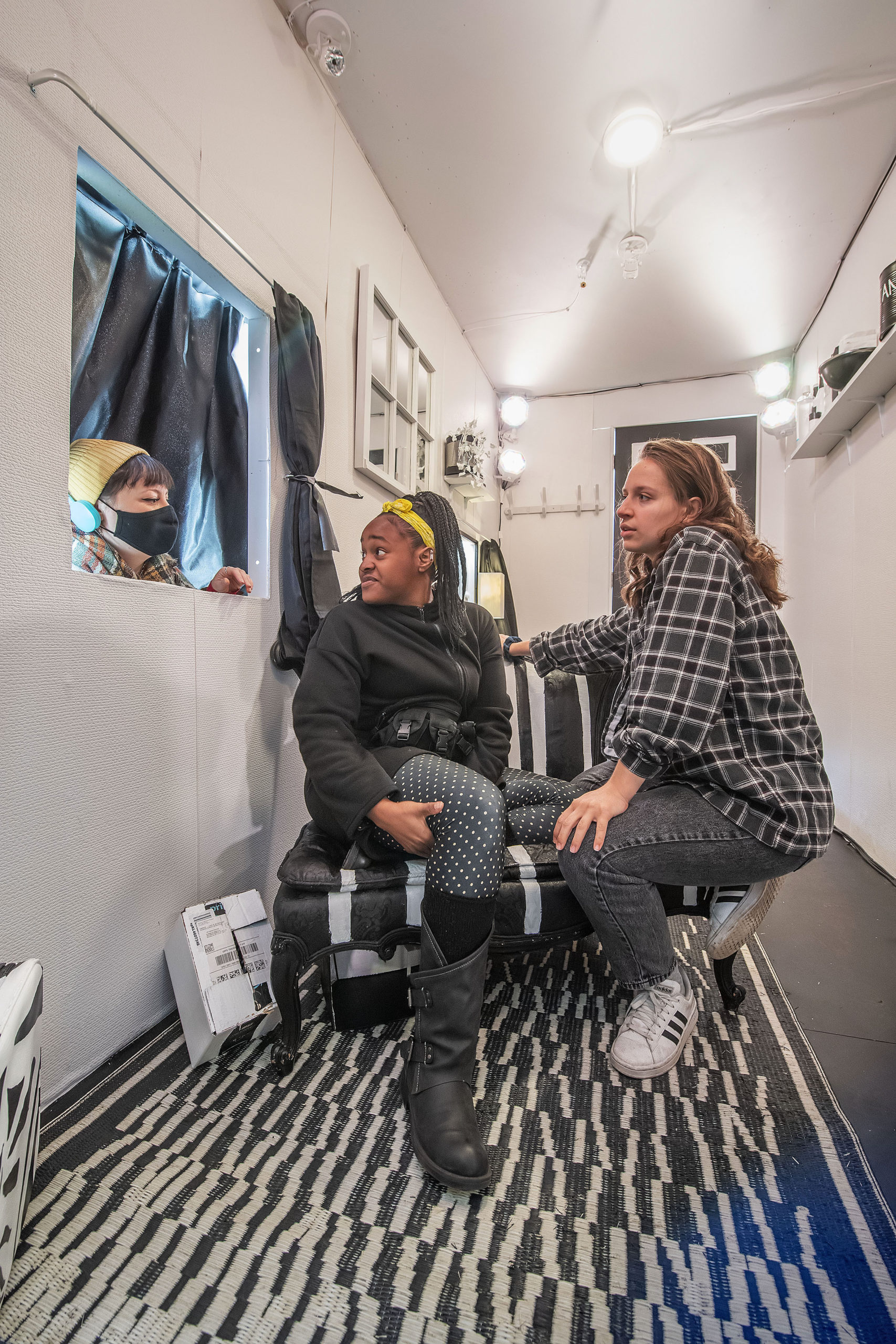 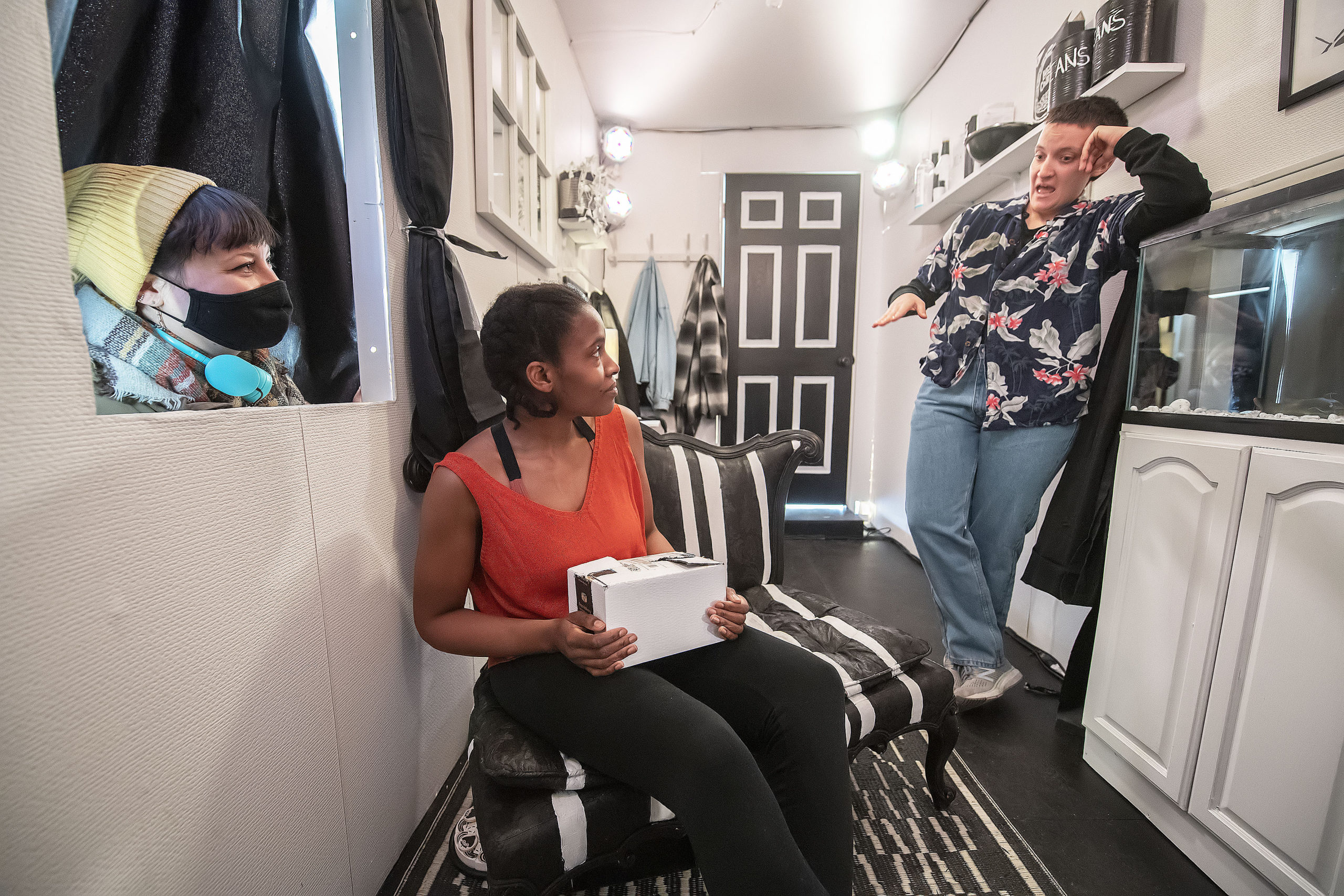 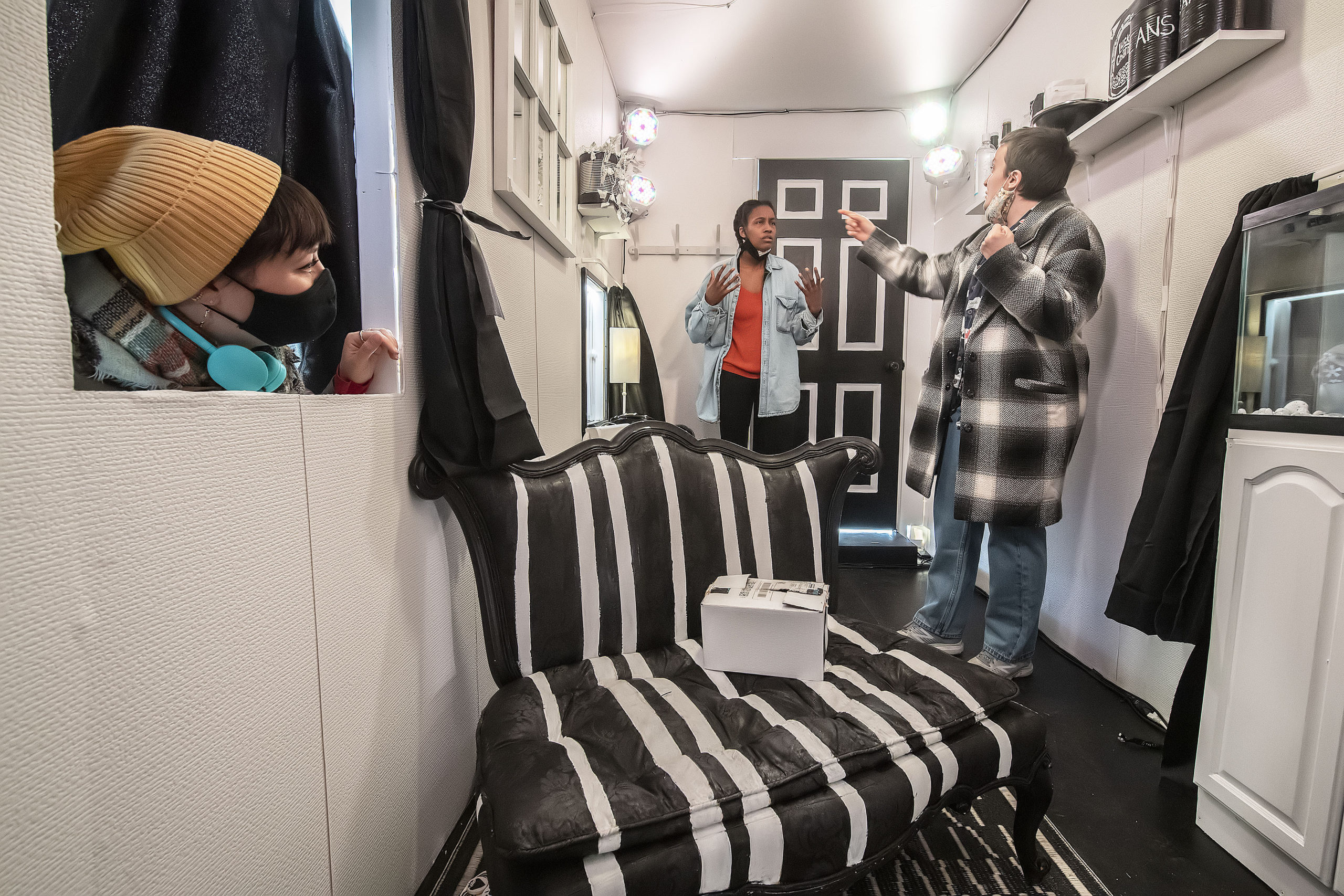 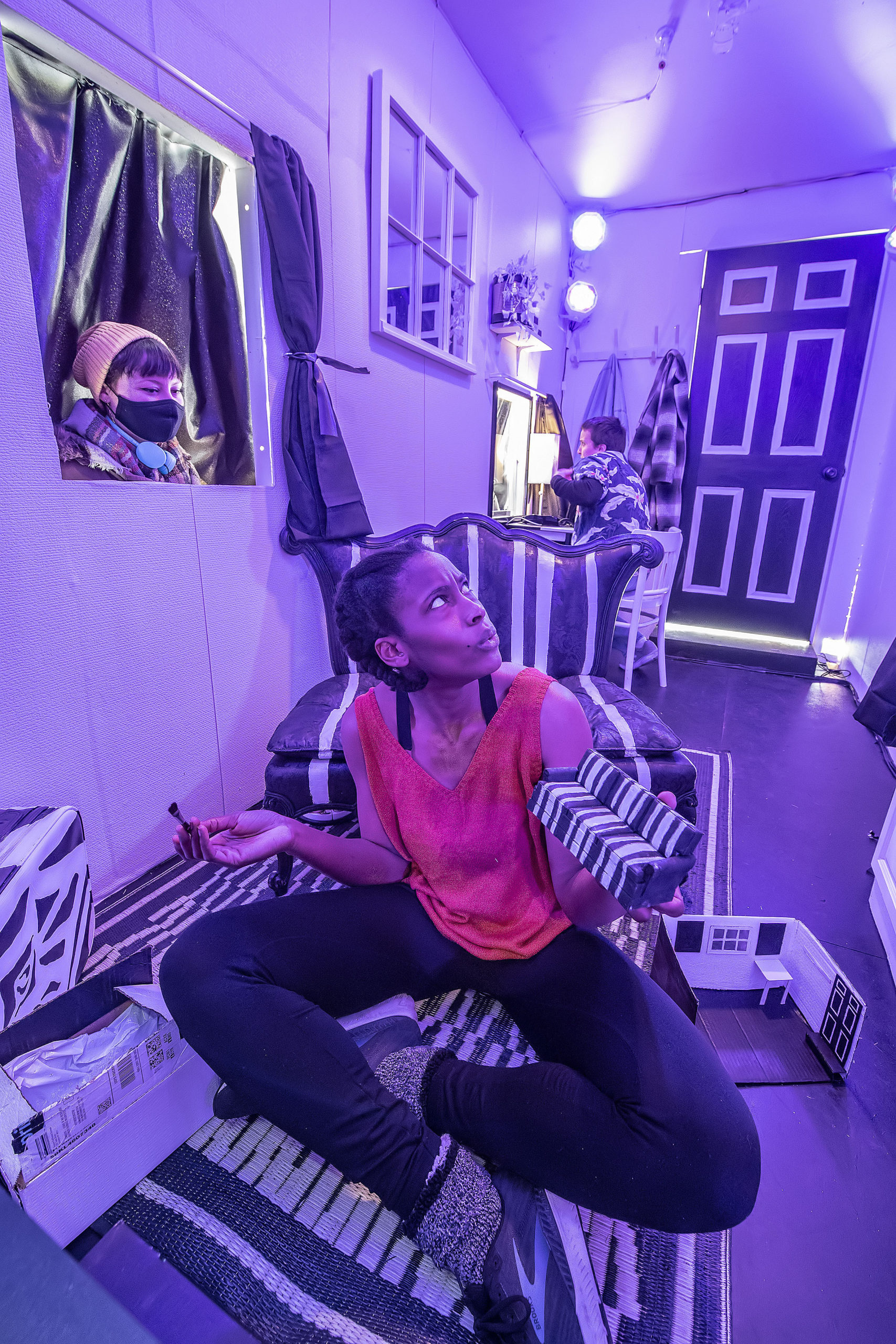 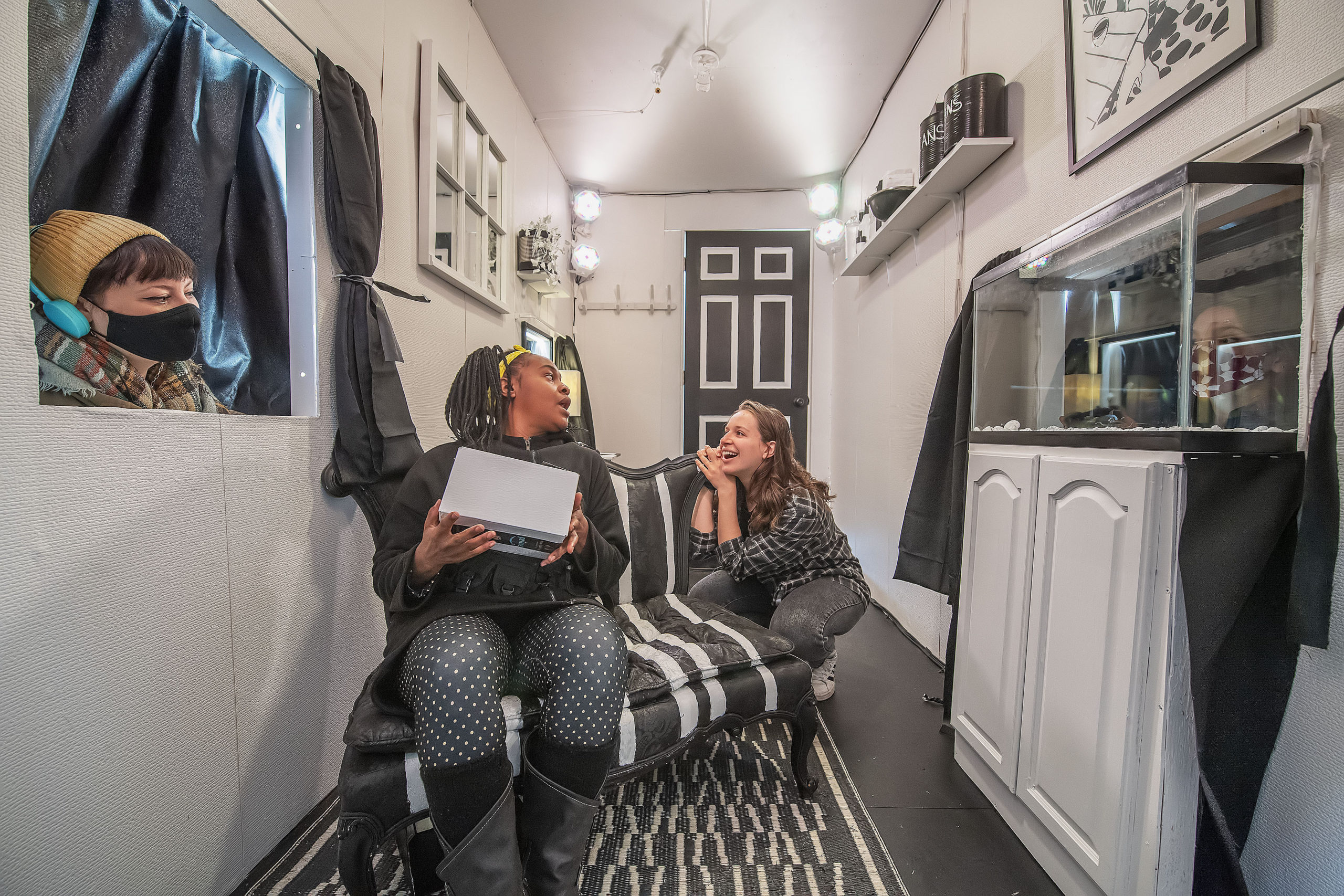 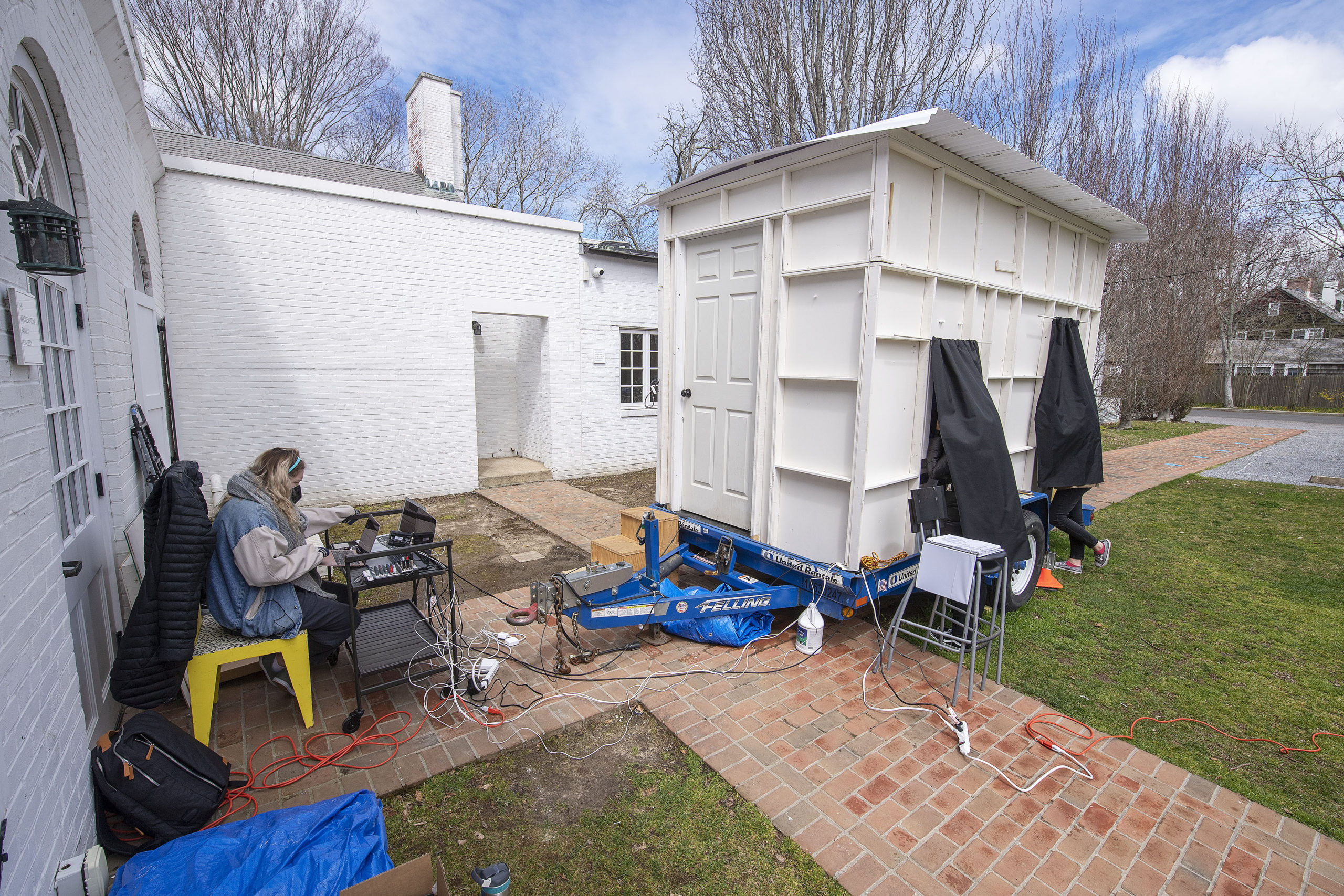 For more than a year now, visual artists have been using their creative talents largely to delve into what it means to live through a worldwide pandemic.

So it was only a matter of time before the actors and playwrights followed suit.

Tess Howsam is the artistic director of the Brooklyn-based theatrical troupe Exquisite Corpse Company (ECC), and back in the spring of 2019, she was an artist-in-residence at Guild Hall in East Hampton. During her time there, she developed “Water, Water Everywhere,” an immersive show that her company went on to perform in a 13-room house on Governor’s Island in New York City.

Now, Howsam is back in East Hampton with her team where, this weekend, they will debut their latest theatrical project, “Zoetrope,” in Guild Hall’s John Drew Backyard Theater.

And this is a project that truly speaks to our time.

The company takes its name and its inspiration from Exquisite Corpse, a term that was invented by the Surrealists in the early 20th century to reference their practice of “collective assembly,” in which artists contribute by collaboration, offering individual pieces to build a unique whole. It’s akin to one of those children’s puzzles in which you can choose a different outlandish head, torso or legs to create a wholly unique and hilariously bizarre character.

Assembling an unpredictable whole from a random selection of parts is exactly what the Exquisite Corpse Company excels at, and its mission is to develop and produce new collaborative work by emerging theater artists, visual artists and musicians.

“Part of the reason for the name — like the head, torso and feet — typically we build work across artistic mediums,” Howsam explained in a recent phone interview. “We’ll start with one area. I like to build off a shared jumping off place — like the ‘Mona Lisa,’ for example — and say, ‘Alright playwright, what’s up with this scene? What would it look like in 10 pages?’ Then I’ll ask the visual artist, what would it look like to them, and then the musician. They each put their artistic lens on a shared idea, then it’s stitched together across multiple planes.

“The whole show becomes an Exquisite Corpse with musicians, actors and playwrights,” she added. “Each production is like a quilt work.”

For “Zoetrope,” which is co-directed by Howsam and Porcia Lewis, ECC writers-in-residence Leah Barker, Emily Krause and Elinor T. Vanderburg have each written multiple storylines for a two-person play, and Guild Hall audiences will be the ones choosing how this particular Exquisite Corpse turns out.

“I want to give the audience this agency over the play and we’re generating a grab bag of madness,” Howsam explained.

Everyone knows that making theater while theaters aren’t technically able to open with anything approaching full capacity is a challenge, which is why with “Zoetrope,” EEC is thinking outside — or rather inside — the box. The name of the production itself hints as to how it will work at in the John Drew Backyard Theater.

Taking its cue from the old-fashioned Victorian-era spinning cylinder with slots that viewers could peek through to see a series of pictures moving on the inside, like its namesake, “Zoetrope” is a self-contained theater designed for modern times. A large box built on a trailer serves as the theater itself. Audience members (no more than six per performance) are seated on stools around the perimeter of the box and from their respective perches, will peer into the interior of the box where a pair of actors will perform a play with three distinct sections — a beginning, a middle and an end.

But there are three different versions of each of those sections as written by the playwrights, and the story that will be told in “Zoetrope” will depend entirely on the sequence chosen by the audience.

“There’s Plexiglas in front of the windows,” explained Howsam. “The structure itself was COVID-inspired, one being how can we create live theater safely? Computers and Zoom don’t give you that community.

“We’re coming up with a way to protect the audience and the community of actors,” she added. “The actors are in the box, the audience watches through windows using headphones to hear what’s happening inside the box.”

Outside, audience members are seated 6 feet apart, and Howsam explains that there are two audience portals for individuals and two larger audience windows that a pair of friends can share. From the inside, audience members’ faces appear on a television set, through a fish tank or in a photograph on the wall. Black curtains that cover the exterior of the windows serve as the backdrop for each audience member.

“The audience becomes part of the world of the play,” said Howsam, who added that the viewers will be called on to make three selections to determine the course of the play. “Our talented cast have to memorize 10 different playlets or scenes that will be presented in whatever order the audience chooses that night. The story completely alters depending on where the audience takes it.

“There is a non-participatory seat,” she added. “If participating makes you anxious, we have one seat per show where you can watch and not be called upon in making a selection.”

Howsam explains that the year 2020 was the key impetus, not only in determining how “Zoetrope” would function in a socially-distanced era, but also the storyline, and she worked directly with the playwrights to build and devise the structure of the show.

“I created the concept of how we do storytelling and how we’re still holding onto the feeling of 2020, which was such an intense and important year,” Howsam said. “I was offering it to our playwrights as a question — how can we begin to talk about things that happened to the community and process it throughout 2021?”

In addition to the writers, Howsam brought in Emily Krause to compose original music for the show and visual artists Emily Addison and Dominica Montoya to create the set.

“The two of them worked off the script to build the set,” Howsam explained. “We’ve set the world of the play in a surrealist black and white living room and the actors are living in this diorama.”

Initially, the two characters in “Zoetrope” were simply named “A” and “B,” with no assigned gender so that the playwrights would have the freedom to make them whoever they wanted them to be.

“But it became important to name them, and they are now Angel and Bae,” said Howsam. “The names are pet names. They’re a biracial couple living in Brooklyn and you never learn their real names. They’re one couple of many dealing with the themes of 2020.”

Among those themes is the sharing of close quarters with a significant other. Because she lives in Brooklyn, Howsam notes that the confinement issues that many city-dwellers experienced during the pandemic are real and one that “Zoetrope” recreates. From the early fears that COVID-19 could come in to homes on groceries to the political movements that defined 2020, the production revisits both the micro and the macro events that defined 2020.

“We start at the surface, but in the pages there are references to BLM as well as into the election and what that was like,” Howsam explained. “And then there are scenes that are more grounded in the surrealist exploration of how do we talk about these things? Some are grounded in nationalism and like overhearing someone at the diner.”

For Howsam, putting this show together for the first time at Guild Hall has brought her back to an environment where she found inspiration as an artist-in-residence in 2019.

“It was very cool to be at Guild Hall with the ocean a mile away,” Howsam said. “There’s so much out here that’s environmentally in tune, which I didn’t know about until I got out here. That’s what absorbed into my skin the first time. When the brain baby came to me for this project, I thought where could we build a set atop an 8-foot by 12-foot utility trailer?

“There were other places we could go, but I advocated for Guild Hall first because they were so welcoming the first time,” Howsam added. “I had worked with [Guild Hall’s] Kate [Mueth] and Josh [Gladstone] virtually during the pandemic as well, I wanted to come back here to my artist residency home to work on this project — this crazy strange new play, because it’s different than anything else I’ve done before.

“This one has a lot of new things to learn and ways of being creative, I wanted to feel comfortable in the space.”

At just 35 minutes, what “Zoetrope” lacks in audience size it can make up for in number of performances — there will be six to eight on both of the show’s two-day run at Guild Hall. After its East Hampton debut, Howsam and crew plan to take “Zoetrope” back to Brooklyn, and since it’s on a trailer, she envisions being able to hit the road with it as well.

“I can travel to different boroughs and communities outside New York City, that’s really exciting to me,” said Howsam. “My hope is it will be a time capsule and a way to address the way we talk about things. With the pandemic, one issue of many is our ability to move forward. There’s a lot to be taken from it that’s still relevant in this year.

“This is accessible. I hope people will come see this show on a trailer and come grab a seat.”