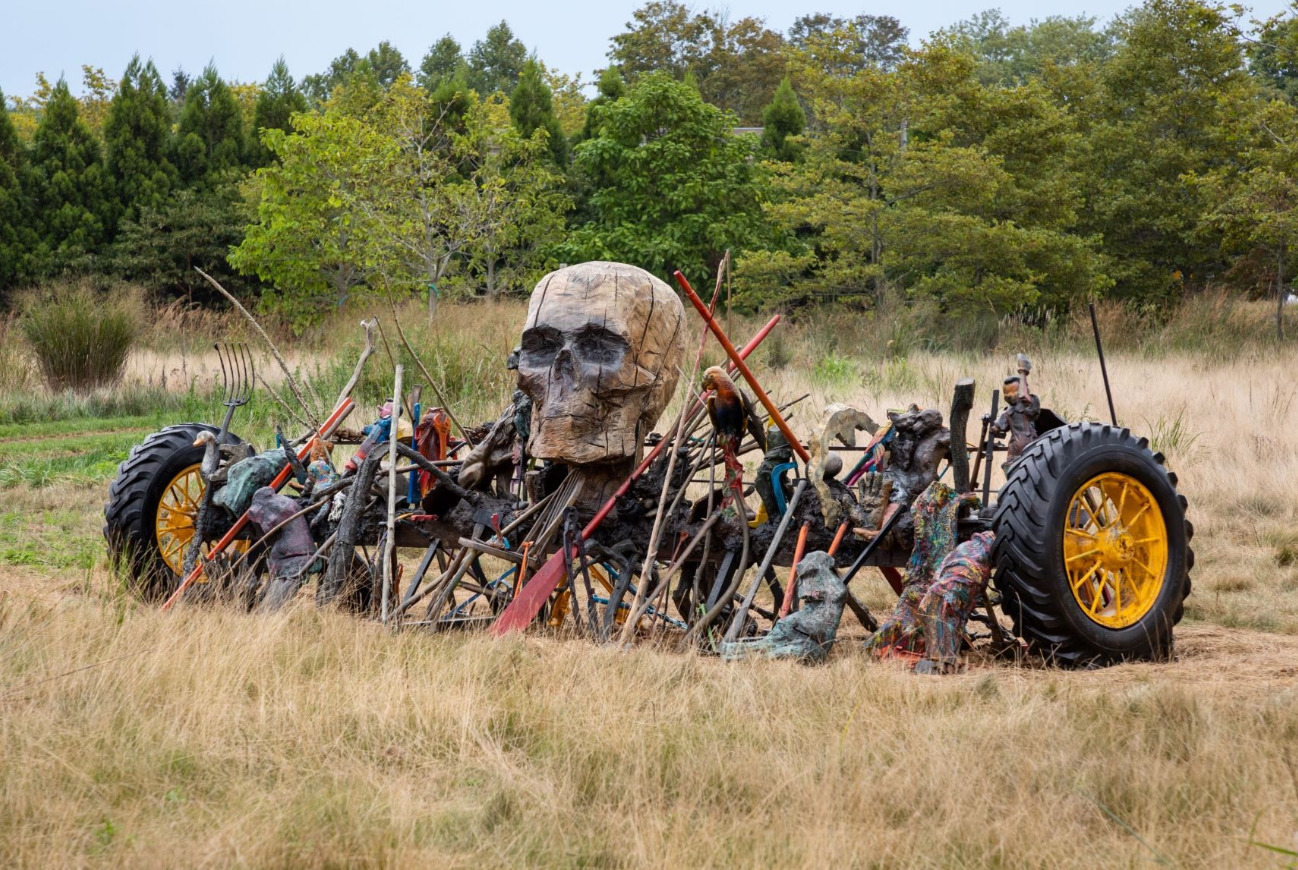 A visionary who was a pioneer of the Happenings movement and integral to the development of Pop art in the 1960s, Dine will discuss “The Hooligan” and “The Wheatfield (Agincourt),” as well as current projects and the trajectory of his 60-year career. The public is invited to join the online-only talk, part of the museum’s Friday Nights Live! series. Login information is at parrishart.org.

“It is indeed a great pleasure to present this evening with the artist Jim Dine, known worldwide for inspiring public works that have astonished and delighted generations of viewers,” Longwell said. “The Parrish is honored to present two of his most recent sculptures in the ‘Field of Dreams.’”

In his work throughout the decades, Dine frequently affixed to his canvases everyday objects — largely his personal possessions — such as tools, rope, shoes, clothing, and even a bathroom sink. He later added gates, trees and Venus de Milo to his repertoire of recurring motifs, as exemplified in “The Wheatfield (Agincourt),” 1989-2019. It expands Dine’s scope into a monumental assemblage comprising a tractor axle fitted with the objects and icons that have populated his life’s work, including farm tools, oars, animal statuary, furniture and toys. For this new iteration at the Parrish, Dine extended the framework of the axle and added new found objects. Several iterations of the Venus de Milo — a characteristic trademark of the artist’s practice since the late 1970s — appear in “The Wheatfield” and provide the sole inspiration of “The Hooligan” (2019), on view for the first time.

Born in Cincinnati in 1935, Jim Dine relocated to New York in 1959, where he joined Allan Kaprow, Claes Oldenburg, and Robert Whitman in the early stages of the Happenings. In New York, he exhibited at Judson Gallery, had his first solo show the Reuben Gallery in 1960, and was part of many other exhibitions nationwide since that time. Dine has had solo exhibitions in museums in Europe and the United States, including a major retrospectives at the Whitney Museum of American Art (1970), Museum of Modern Art (1978), and Solomon R. Guggenheim Museum in New York (1999); the Walker Art Center in Minneapolis (1984–85), and National Gallery of Art in Washington, D.C. (2004).

In 1965, Dine was a guest lecturer at Yale University, artist-in-residence at Oberlin College, Ohio, and a visiting critic at Cornell University a year later. The artist, who attended the University of Cincinnati, the School of the Museum of Fine Arts, Boston, and Ohio University, Athens lives in New York, Paris, and Walla Walla, Washington.

Opened on August 20 as part of the new Art in the Meadow initiative at the Parrish, “Field of Dreams” presents work by 10 international, multigenerational artists working in a variety of genres throughout the 14-acre museum grounds. The outdoor sculpture exhibition is open and free to the public daily, from 11 a.m. to 5 p.m. The Parrish Art Museum is at 279 Montauk Highway, Water Mill.