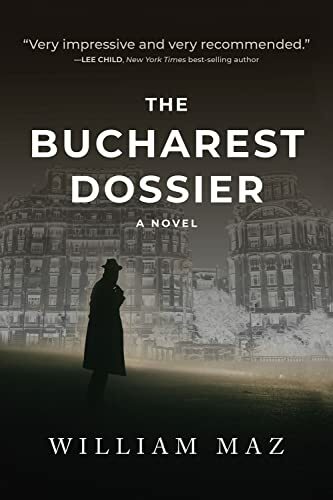 "The Bucharest Dossier" by William Maz.

It’s rare that a debut novel reads like the work of a pro, but 60-something William Maz pulls off such an achievement in “The Bucharest Dossier,” an exciting espionage tale and love story that resonates both as memoir and historical fiction and explores a theme that couldn’t be more timely: the ways propaganda and lies stealthily destroy democracy, the “reign of terror” under post-war Communist rule, the promises of a political spring uprising and the horrific human costs of war and exile. What an original and artful linking of the wrenching end of childhood innocence and love, and a suspenseful, cynical day-by-day account of revolution and realpolitik!

A murky black and white cover suggests noir but hardly the complexity of the narrative, lively dialog and colorful characterizations inside. An intriguing opening sentence pulls the reader in: “Professor Andre Pincus left through the rear door of the Harvard Faculty Club wearing another man’s coat.”

No spoiler to note that he’s soon found dead. A fellow Romanian, he had been a mentor and friend to young Bill Hefflin, whose Romanian family changed its name to assimilate in America. Bill arrived with his family when he was eight, after a year in a Greek refugee camp. Intelligent, good looking but aloof and disillusioned, Bill finds himself years later at Harvard, where he’s invited into the prestigious — and real — Fly Club. There, he’s subtly seduced by secret CIA agents and a beautiful, charismatic sophomore into playing spy games to see if he’s got what it takes. He does. Pining for his lost childhood in Bucharest, hoping to find out what happened to his long-lost young love there and angry about the killing of his friend, Prof. Pincus, Bill acquiesces and becomes a CIA “asset.”

Like many first-time novelists, Maz looks back on his own early life. Unlike most first novels, which tend to rely heavily on memoir or autobiography, Maz can count the real-life scenes in “The Bucharest Dossier” on one hand — “kernels of reality” — haunting memories of Romanians standing on line for food, fears of the secret police (“it’s likely that one out of four people were paid informants,” desperate for money, a horror that “changed the way” people coded remarks to one another in public”), but imagination rules. Maz’s cast of characters is memorable, the swift plot changes defy expectations, the ending deeply moving. Brutally realistic but also affectingly personal and nostalgic, the novel draws on the potent myth of childhood innocence and love.

As the author looked back 30 years, it was clear to him that the full story of the violent 1989 uprising against Ceausescu had not been told. Why was Romania the only Russian satellite to have a bloody revolution? What was Ceausescu’s game in playing both America and Russia? Who had a long-term interest in guiding the revolution, with all its horrific deaths? Maz once said, “like the frog sitting in water that is starting to boil, totalitarianism comes on slowly and all of a sudden you have all these rights taken away from you before you know it.”

The author, a former anesthesiologist who attended the Mount Sinai School of Medicine and did a residency at Yale, kept pursuing his love for writing, even as he practiced medicine in the city. He studied fiction writing at Harvard, The New School, The Writer’s Studio and, for a year, worked with the renowned writer and editor Gordon Lish, finally taking the plunge, retiring from medicine and living for a while on Accabonac Road in East Hampton, writing. Asked about the value of writing workshops, he noted that their peer-based, critiques depend upon participants’ expertise and time, and on a lifetime of reading. He points proudly to his appropriating a folk tale from Dickens’s “Great Expectations.” Significantly, he notes that what workshops can’t adequately address but is likely the most challenging aspect of writing fiction is structure. In this regard “The Bucharest Dossier” shines: adopting a dateline plot for its fast-moving events preceding the December 1989 revolt against the crooked and cruel regime of the Ceausescus.

The author has already completed two more novels, including a sequel to “The Bucharest Dossier” which he teasingly hints will reveal the deep corruption of Romanian oligarchs after the revolution — an insider look at the way gun trafficking to Christian Croatia and Serbia took over the country, a parallel to America’s arming of Muslims. The book will be out in early spring but rave reviews are already online.