Elayne Boosler Performs At Westhampton Beach PAC On May 14 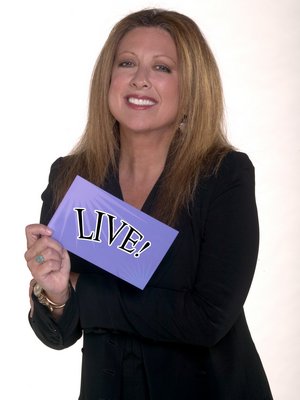 Stand-up comic Elayne Boosler, who is coming to the Westhampton Beach Performing Arts Center on Saturday, May 14, doesn’t think of herself as a “woman comedian.”

She likes to say, “I’m just a human being trapped in a woman’s body.”

Still, it can’t be ignored that she blazed the path for other women in comedy.

Her first turn as a comic was in 1973 at the New York Improv. She was a waitress and singer there, and, with the encouragement of friend Andy Kaufman, she tried her hand at stand-up—and succeeded.

By the early 1980s, she became an in-demand headliner. She could sell out venues nationally, but she still could not land a cable special like her male colleagues—no woman could. Cable executives told her that no one would tune in to watch a woman perform an hour of comedy.

But, boy, did she prove them wrong.

Ms. Boosler was friends with Mr. Kaufman, a provocative and innovative performer, for many years—they even dated and lived together for a time—and she co-wrote his last comedy special, “The Andy Kaufman Show,” for PBS’s series “Soundstage” in 1983.

“That was his last special, a year before he died,” she recalled during a recent interview. “He came to me and said, ‘I want to go back to the beginning, when it was more innocent.’” She told him she would like to, but she was touring. He agreed to join her so they could work together between performances.

“We spent about six months on the road and wrote that show, and ended up in Chicago and shot it,” she said.

In a particularly memorable scene, Mr. Kaufman sits behind a talk-show host desk that is 10 feet higher than the guest’s seat. He welcomes Ms. Boosler to the show, and points out that they used to date. The interview devolves into an argument that continues even as the show goes to a faux commercial break.

Just how much of the argument was scripted, and how much was improvised, she will not say. “I really never tell on that one,” she said. “I want to keep the magic of people arguing online.”

In 1985, her then-boyfriend was a producer and cameraman, and he urged her to make a special herself, then sell it to the cable networks. She had very little savings to finance the project, but they made it work. “He said, ‘I know everybody in New York. Let’s see if they want to get paid posthumously,’” Ms. Boosler recalled.

They found a willing film crew, and also convinced a number of stars of the time to appear in cameos, including Dr. Ruth, during her first year on television; Bill Cosby, when “The Cosby Show” was the number-one show on TV; and David Letterman, when he made no appearances outside of “Late Night.” She named the special “Party of One.”

Despite the star power—and how funny it was, honed from 12 years of jokes—both HBO and Showtime rejected the special.

“I got the hottest celebrities you could get and did this amazing show, and I went back and they said, ‘Nope,’” Ms. Boosler said.

Dejected, she told her boyfriend she wanted to go on the road for a year to pay everyone back, and then quit stand-up.

But a year later, younger, hipper guys took over Showtime, and they not only agreed to buy the comedy special, they would eventually buy four more.

“HBO, as soon as the New York Times review came out raving, immediately came out with the show ‘Women of the Night,’” Ms. Boosler noted. That stand-up special featured four female comedians, and spurred several sequels. “They still had to name it after hookers, though, to be comfortable,” she quipped.

HBO introduced a sister network, Cinemax, which enlisted Ms. Boosler to write and direct two short movies. Both HBO and Showtime told her not to work for the other network, but after being turned down in the past by both, she refused to be exclusive. “It was great,” she said. “I got to work for everyone.”

Ms. Boosler said she was very political on stage when she was younger, but not anymore. “I didn’t mind losing who I lost and getting who I got, and it was kind of me against them,” she said. “And now, what I realized, just in life—and especially in politics today—it’s me and the audience against them up there. It’s us against them, not me against you. So, I take the temperature of what everybody’s thinking—not just my stuff—and I think there’s so much common ground.”

She said that it is a really delicate tightrope to walk. “I’m not there to preach anything, and I’m not there to change anybody’s mind. I’m there to make people leave feeling better than when they came in. And that’s what I want to do. It’s an inclusive thing, not a divisive thing.”

These days, Ms. Boosler splits her time betweens homes in Los Angeles and New York, when she’s not touring nationally, and sometimes internationally—last year, she won the Giant of Comedy Award at the Cabo Comedy Festival in Mexico.

She also has a nonprofit, Tails of Joy, that provides “Little Guy Grants” to small animal rescue groups. For each of her stand-up performances, she picks a local beneficiary to receive the proceeds of merchandise sales. Because the organization is all-volunteer, she said, 100 percent of every dollar collected goes to rescue animals. For her Westhampton Beach show, she picked Last Chance Animal Rescue, based in Southampton.

She is also writing a book about her experiences in comedy, going back to when she worked at the Improv. She hopes to release it in the near future. “My poor book,” she said. “It’s 50,000 pages at this point. It’s not writing it—it’s de-writing it. I’ve been working on it, literally, for 30 years.”

Many books on comedy have gotten so much about her era wrong, she said, and she wants to correct the record.

One popular book, “I’m Dying Up Here,” which is being adapted for television, erroneously reported that she didn’t like the founder of the Improv comedy clubs, Budd Friedman, and never walked into the Los Angeles Improv in her life.

“I was the hostess of the New York Improv in 1973, when it was just sort of a jazz dive,” she said. “When he opened the LA Improv in 1976, I was the comedian he flew out and put up for a month to be the headliner of a brand-new club that no one had ever seen in California before. We were great friends. I lived in that club for 12 years—it’s such a big thing to get wrong.”

Ms. Boosler’s book-in-progress is titled “Big Fun.” “It’s not an autobiography,” she explained. “It’s just all the funny stories from what I call ‘The Second Golden Age of Comedy,’ because I was the one at the door for three years.

“So I remember every word, every act—every great act in those days. And then I saw a million things that nobody knows but me, which were hilarious. It’s really just a book that’s funny from beginning to end.”