Exploring The Life And Art Of Rembrandt On Film - 27 East

Exploring The Life And Art Of Rembrandt On Film 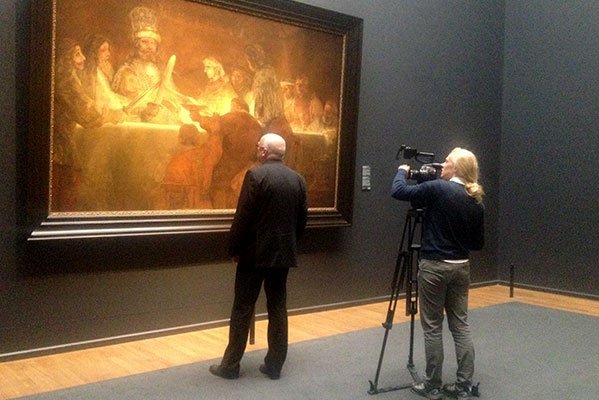 Shooting of Exhibition on Screen's “Rembrandt from the National Gallery, London and Rijksmuseum Amsterdam”

For many, Rembrandt is the greatest artist who ever lived and fans of Rembrandt’s work have an opportunity to get an inside look at the artist and his work in a film screening sponsored by the Hamptons International Film Festival on Friday, May 17 at Southampton Arts Center. A production of Exhibition on Screen, “Rembrandt from the National Gallery, London and Rijksmuseum Amsterdam” explores the key works of the artist through the lens of filmmakers who were given privileged access to a special Rembrandt exhibition at both galleries. The film interweaves Rembrandt’s life story with behind-the-scenes preparations at both institutions and includes contributions from curators and leading art historians. The film also seeks to explore the truth about the man behind the legend.

The exhibition focuses on the highlights from the final years of Rembrandt’s life, commonly thought to be his finest years. The masterpieces he produced during this period could be called his defining works, with each piece so soulful and honest that they helped sculpt our idea of Rembrandt as a man and as an artist.

“Rembrandt” will be screened as part of HIFF’s Now Showing series which brings notable films currently in theaters to the East End. Southampton Arts Center is at 25 Job’s Lane in Southampton Village. Tickets are $15 ($10 for HIFF members and friends of SAC) at hamptonsfilmfest.org.

This week, The Watermill Center (TWC) welcomes its newest artists-in-residence: dancer and choreographer Yusha-Marie Sorzano and researcher and poet Zoë Hitzig. The new artists are the latest group to continue TWC’s hybrid residency program, with Sorzano working onsite at the East End campus, while Hitzig is working virtually from her home studio. Sorzano’s residency marks the second year of YoungArts and TWC’s Mentorship Residency, launched last year in partnership between the Center and The National YoungArts Foundation (YoungArts). The program annually welcomes an alumnus from YoungArts to The Watermill Center for a residency to foster the ongoing growth and development ... 1 Mar 2021 by Staff Writer