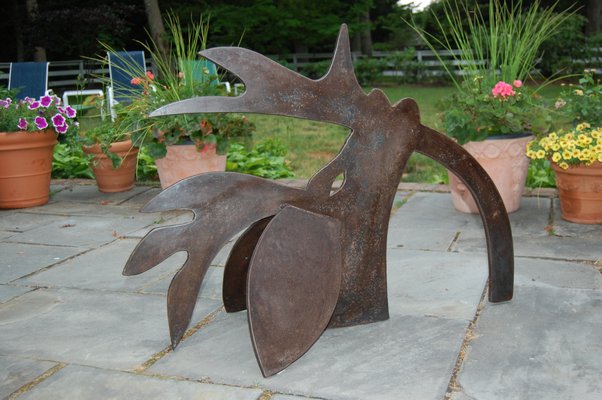 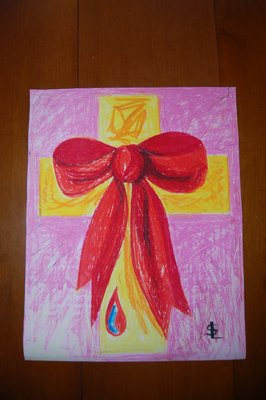 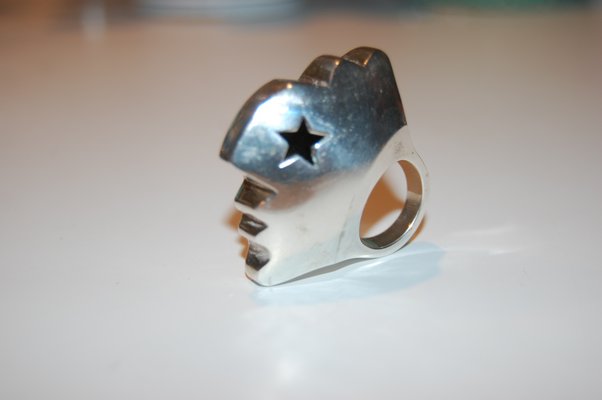 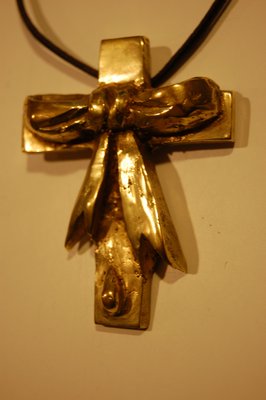 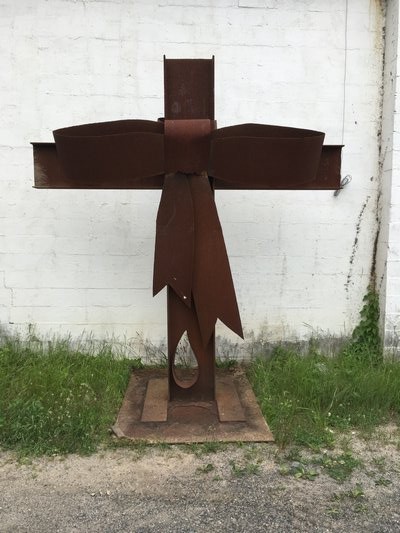 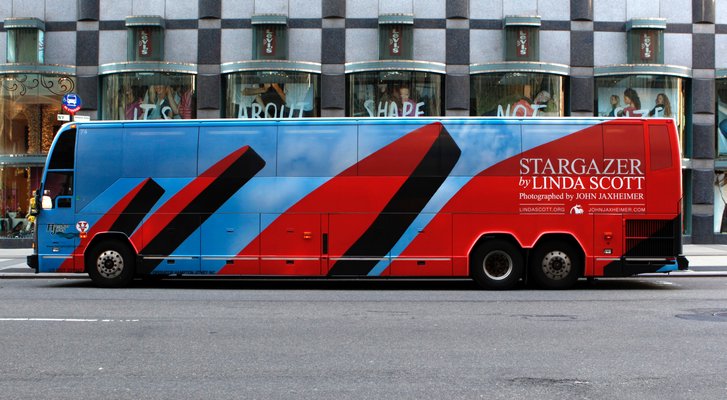 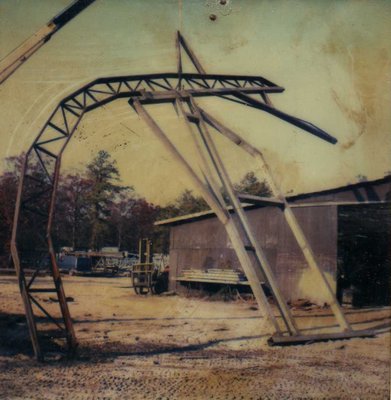 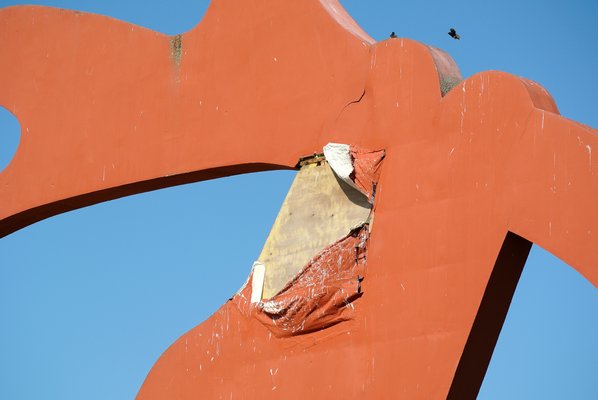 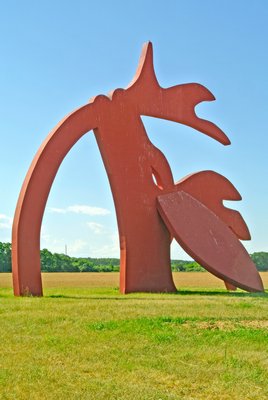 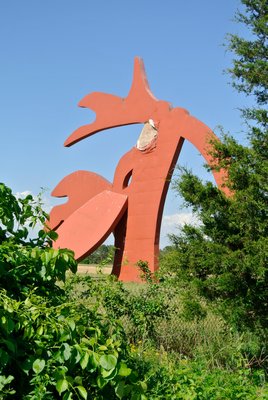 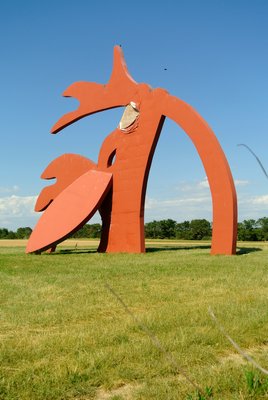 The sculpture that is arguably most associated with the Hamptons—despite being located in Manorville—is in bad shape, but a new effort is under way to restore “Stargazer” in a manner that will ensure it stands for another 25 years, and even longer.East End artist Linda Scott created the nearly 50-foot-tall sculpture of a deer looking up to the sky, with an antler in its mouth. She died in July 2015 at the age of 77 after battling cancer, and her death was intentionally kept quiet so her artworks could be secured. Now, a year later, plans are in motion to start fundraising for the expected $80,000 to $100,000 cost of restoring and shoring up the steel-and-wood artwork.

David Morris of Springs, who was Ms. Scott’s partner, explained during a recent interview that Ms. Scott had made the Mayan-inspired female “Stargazer” first. When it was displayed at an art fair near the Southampton train station, someone noticed it and invited her to display it on a Butter Lane field in Bridgehampton. Both the female and male heads were displayed there for a time.

The deer sculpture was originally intended to be placed in Wainscott, at the entry road to the Animal Rescue Fund of the Hamptons shelter facility, but, due to a number of complicating factors, that plan did not come to fruition. The sculpture was not tall enough for big trucks to drive under—and it may have been so tall that it endangered planes at the adjacent East Hampton Airport—so “Stargazer” needed to find a different home.

Ms. Scott and Mr. Morris found a willing host in Harvey Pollock, who, as part of an estate trust, owns land on the side of County Road 111 that is currently in use as a sod farm. “Stargazer” was set there with a 150-ton crane in 1991 and almost immediately became a beloved local landmark. For many who come to the South Fork via the Long Island Expressway, the sight of “Stargazer” lets them know they have reached their destination, and they can begin to unwind.

Though Ms. Scott was the artist behind “Stargazer,” Mr. Morris, who has a degree in civil engineering, also had a hand in designing it. He helped ensure that the sculpture would support its own weight and not blow over. “We had to design it to sustain hurricane wind,” he said. He designed the steel frame, as well as the mushroom footing that goes undergound 6 and a half feet. Then, in 1989 or so, they brought the design to steel fabricators J. Trocchio & Sons in Manorville to have the frame manufactured.

“He and Linda showed up at my shop here in Manorville with a pickup truck full of plywood and basically asked if I could make a steel structure that would make this thing stand,” Mr. Trocchio recalled.

Mr. Trocchio is also advocating for saving “Stargazer.” He has saved other works by Ms. Scott in the past when they were displaced, though not every massive sculpture could be preserved. A swan sculpture was cut up for scrap metal, he said. But he has saved a steel sculpture of a large cross with a ribbon on it, and a sculpture of a heart with a knife in it. The cross had been on display at the Elaine Benson Gallery, and the latter sculpture was said to have been commissioned by an ambassador to Germany after his divorce.

Mr. Morris said that covering the steel frame of “Stargazer” is a wood frame and plywood skin, which is stuccoed and painted over. The sculpture has required maintenance over the years to keep its red color, and plywood has been replaced when it has worn out or been vandalized.

The Hampton Jitney, a Southampton based transportation company, has sponsored the sculpture’s maintenance in the past, but that agreement with Ms. Scott ended a few years ago. Now that she has died, others are taking up the task of fundraising for the preservation of “Stargazer.”

There is presently noticeable damage near the top of the sculpture, where the stucco veneer over the plywood is peeled back.

The renovation will involve stripping the sculpture down it its steel frame. While the steel is galvanized and should be able to withstand moisture without rusting, Ms. Morris said he plans to paint the steel frame to further protect it from the elements. And with the wood removed, the frame can be inspected—the sculpture has withstood three hurricanes, he noted, and movement in the wind may have affected the frame. The sculpture will then be re-clad in wood and repainted.

Despite the high cost of restoring “Stargazer,” Mr. Pitts is confident fans of the sculpture will support the effort. “The whole reason it lasted past its inception is that people donated,” he said.

The DeLalio Sod Farm that the sculpture sits on is part of 54 acres of land preserved for agriculture use. Brookhaven Town Councilman Dan Panico confirmed that the land is part of the Pine Barrens core area, and it is not at risk of being developed.

If the sculpture ever had to be moved for any reason, Mr. Panico favors keeping it in Manorville and said he would dedicate his time to finding a suitable location. “It is a sculpture that most people associate with Manorville,” he said. “When you’re coming down County Road 51, you see that sculpture, or driving along County Road 111. It’s become, really, an iconic symbol of Manorville.”

Hampton Jitney—the transportation service whose coach buses pass “Stargazer” several times a day— wrapped a number of its buses in photographs of “Stargazer” by John Jaxheimer, a friend of Mr. Pitts who had participated with Ms. Scott in an Artist’s Choice show at Luna Farm in Sagaponack, where she had lived for a time and displayed large sculptures and paintings. He is a photographer and a creative director who’s worked for Rolling Stone, Vogue, the Sports Illustrated Swimsuit issue and more. Having known and appreciated his work, she asked him to collaborate with her on the bus wraps.

“It was a great relationship, and it was a lot of fun to do it,” Mr. Jaxheimer said. He noted that, for Ms. Scott, “Stargazer” represented the connection of the above to the below—everything is connected to the earth people walk on. It also represents preserving what makes the East End special, he said, namely the farmlands and the environment. That’s one reason he said it is important for “Stargazer” to be preserved.

“It’s like the gateway to the Hamptons,” Mr. Morris said. “They recognize it, they’re coming out, and it represents the sea, the air—it represents something different to everyone. Some people really get touched spiritually from it. It means something. It has some kind of ... I think there’s a force field right where it is.”

Mr. Morris said he is confident “Stargazer” will stay put for a really long time: “It was only supposed to be there for five years, and look how long it’s been there.”

Since it will be a while before traveling the globe will return, Montauk Library is ... by Staff Writer

On Tuesday Nights, Watch With WHBPAC

You may be by yourself, but you’re not alone. That’s the philosophy of the Westhampton ... by Staff Writer

Hear From The Filmmakers In ‘Cinema Live’

For The Love Of Jack Larsen

Are your kids funny? Now’s their chance to shine as Southampton Cultural Center (SCC) offers ... by Staff Writer

Inspired by the works of Bertolt Brecht and Kurt Weill, “Urinetown” is an irreverently humorous ... by Staff Writer