Glassblowers Among Us: Work By 'Four Glass Artists' On View at D'Amico Institute - 27 East

Glassblowers Among Us: Work By ‘Four Glass Artists’ On View at D’Amico Institute 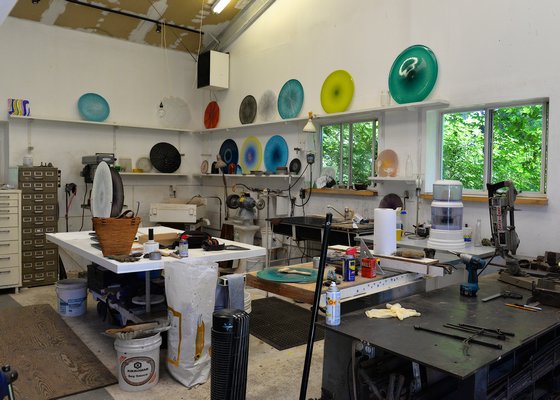 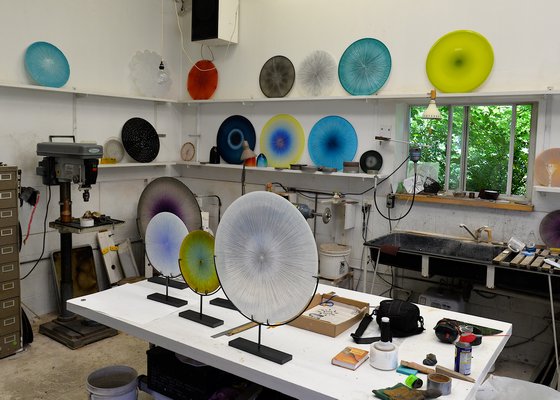 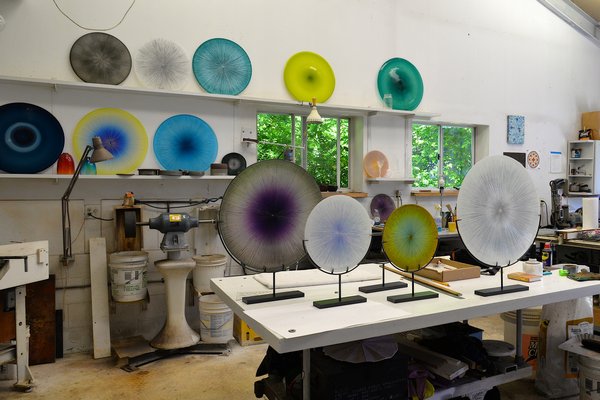 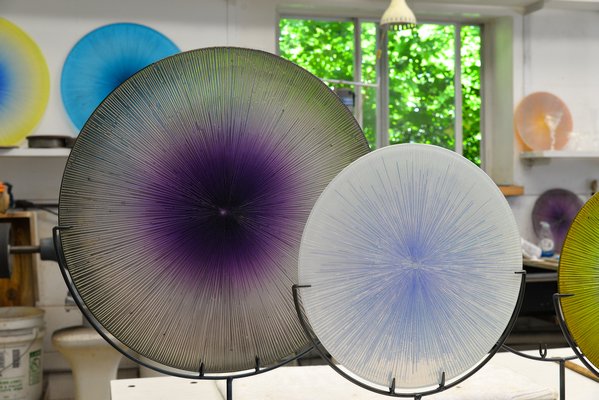 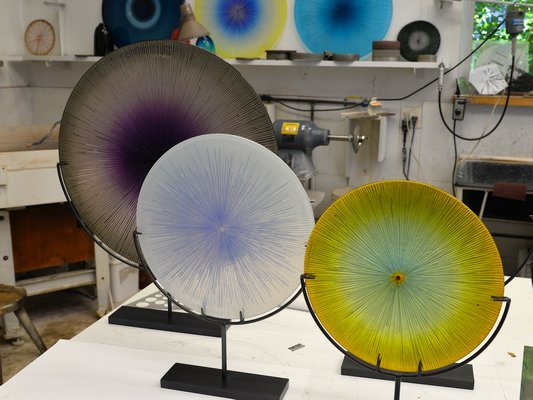 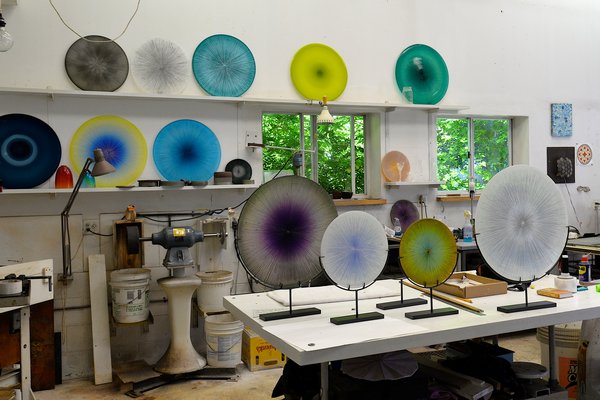 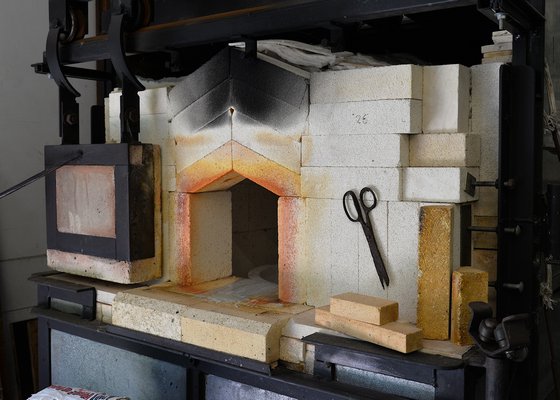 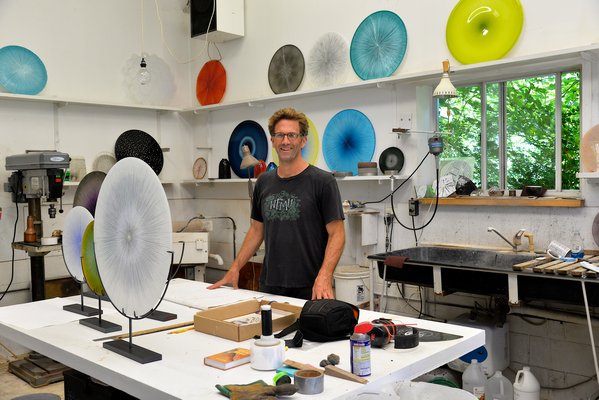 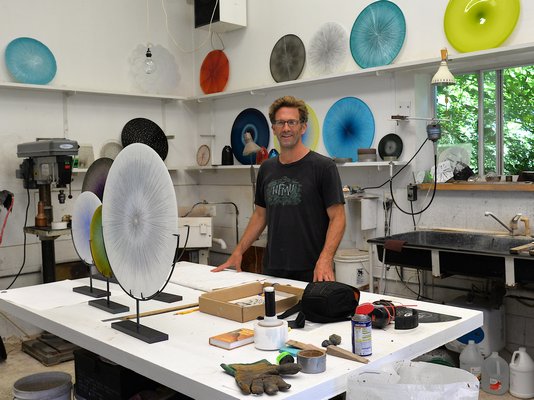 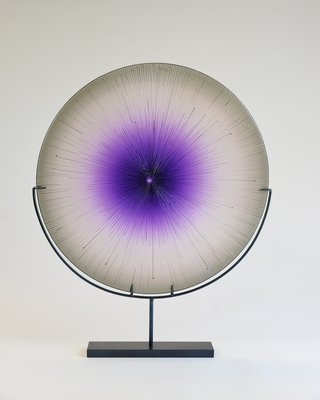 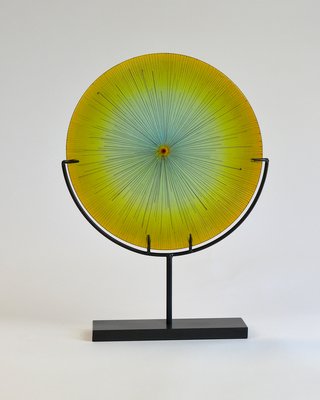 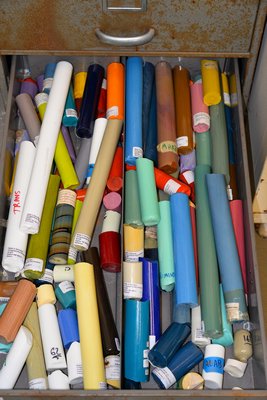 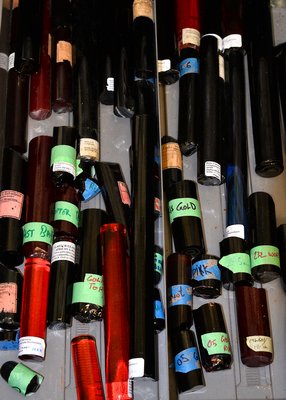 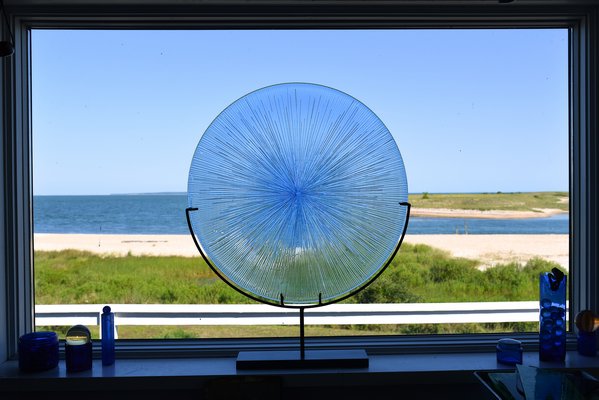 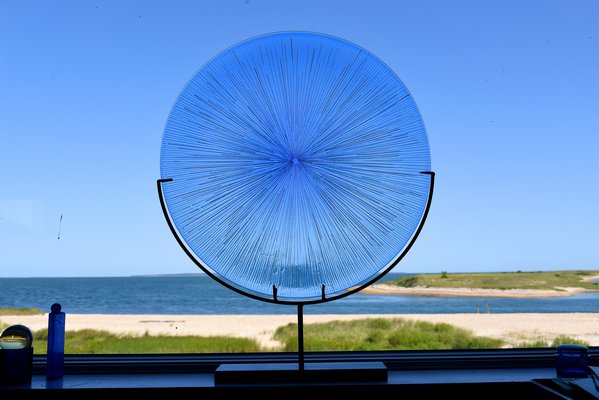 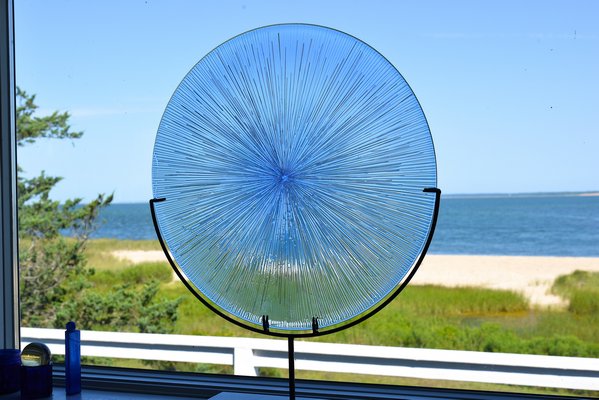 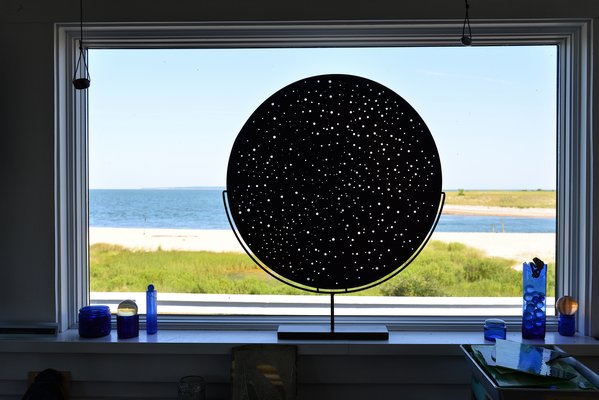 The light filled Mabel and Victor D’Amico Studio and Archives, at 128 Shore Road in Amagansett, is the perfect setting for Four Glass Artists, on view through September 7.

In 1940 the D’Amicos, both art educators, purchased their bayfront home on Lazy Point, now a Modernist museum. Twenty years later, they shipped a retired Navy barge from New Jersey to Napeague and christened it “Kearsarge,” a Native American word meaning “place of heaven.”

Better known as the Art Barge, the educational art facility for children and adults overlooks the head of the harbor, and still operates thanks to the Museum of Modern Art, where Mr. D’Amico worked for 32 years and the couple’s former assistant Christopher Kohan, who now runs the nonprofit organization the Victor D’Amico Institute of Art.

The current exhibition was conceived to feature local glass artists and provide a dialogue with the artwork in the permanent collection by Mabel D'Amico, who also worked with the medium, mainly mosaic and fused glass. The show represents different glass techniques, including blown and cast glass by Hokanson+Dix, kiln- and cold-worked glass by Andy Stenerson and cast glass with cast bronze by Marianne Weil.

Three out of the four glass artists showing at the house live in East Hampton. Mr. Stenerson moved to Amagansett from Brooklyn in 2002. Bengt Hokanson and Trefny Dix of Hokanson + Dix live in the house where Mr. Hokanson grew up in Northwest Woods. Their glass studio was previously occupied by the famous sculptor Hans Hokanson, Mr. Hokanson’s father.

Ivy creeps up the siding of Mr. Stenerson’s 1,000-square-foot studio which he built behind his house 13 years ago.

“I was told this used to be part of Poseyville,” he said of the cluster of fishing families, some of whom live nearby. It’s a sunny August day and he’s getting relief from the heat in a grove of cedar trees that form a circle between his home and studio.

Circular patterns have influenced Mr. Stenerson’s most recent work, called rondels, named after a glass blowing technique. Rondels are also a form of poetry and that makes sense too, as his artwork is very meditative.

“I started doing these two years ago,” he said. “These are called rondels, where the phrase ‘bullseye glass’ comes from. There’s always a center mark when you blow it.”

The rondels are a mix of various opaque and transparent colors, mounted on metal bases which he forges himself. In fact, practically everything in the studio, including equipment and tools, were made by the artist, who studied under masters Lino Tagliapietra and Pino Signoretto, as well as Dale Chihuly.

As opposed to Mr. Chilhuly, who has dozens of people working for him, Mr. Stenerson wants to stay small. It’s pretty obvious that he’s a perfectionist and likes to be in control of his own work, although sometimes you need more than two hands when blowing glass.

“A full-time assistant would be great,” he said.

During the hot months of July and August, glass blowers traditionally will not turn on their furnaces. In these months, Mr. Stenerson does a lot of research and development, and a lot of cold work. He was recently found at the studio in the middle of photographing a chartreuse rondel on a table covered in white paper in the hopes of soliciting galleries for work.

As a day job, Mr. Stenerson works with lighting designers such as Sag Harbor-based Helen Gifford of HelenBilt to create indoor, functional and decorative lighting. While custom work is great money, he notes that it’s time consuming.

The sentiment is echoed by Mr. Hokanson, who is a woodworker when he’s not blowing glass or making sculptures. He laments that the construction business on the East End has become greedy and moves too fast for his sensibility.

“It’s all about flipping,” he said on his way out the door to pick up his two children from soccer camp.

Upon pulling into the drive, one may notice two doors on the front of the home. I knocked on the first, gigantic door, made from rustic barn wood, but Ms. Dix opens the second. The boulder steps should have given me a clue. “People never know what door to go to,” Ms. Dix said, the family dog by her side.

In the entryway, a small clear glass sculpture sits on a windowsill.

“I collect antique casters,” she laughed, lovingly touching the little wheels that she placed on the bottom of the artwork.

While her husband runs errands, she gives me a brief tour of their home and studio before cooking dinner for friends and family. They have a small vegetable garden and chickens for eggs and tick control, out back, where the entry to the studio is located. Inside the studio, the glory hole, marver table (a marver is a glassblowing tool) and blow pipes are squeezed together.

When the studio is “hot” and the furnace is cooking at 2,100 degrees Fahrenheit, everything is cleared out of the way as the duo work together to create their colorful pieces that cool overnight in the annealer at 925 degrees.

They make their own canes and murrinis (colored images made in a glass cane) to pattern their glass art.

“We spend a lot of time making color elements,” Ms. Dix said in a storage area where shelves are lined with work reminiscent of a box of crayons. Their most popular forms include a purse, landscape bowl, and butterfly.

“The way we apply color to each piece is unique,” she said, handling a tiny orange and velvet blue tile that is picked up with the hot glass to form a pattern.

“Precision” and “technical” are not words that she would use to describe their work. “I like variety,” she said.

She also likes birds. “I’ve been a birdwatcher since I was 13,” she said flipping through a stack of watercolors depicting a hummingbird, chimney swift, and canyon wren resting on an office table.

Ms. Dix, who works for landscape designer Jennifer Miller when she’s not making art, grew up in North Carolina and met her husband when they both worked at Studio Inferno, a glass studio in New Orleans, Louisiana. Before moving to East Hampton, they lived in Greenport where they had a studio for 10 years, called Boar Glass, but they dissolved that name because galleries like to use the name of the glass artists.

The Artful Home website outsells any other gallery that features their work, whether in Boston, Massachusetts or London, England. Unlike in the past, people are now willing to buy expensive pieces online explained Ms. Dix. In fact, four of their galleries have closed over the last two years because they couldn’t compete with internet sales.

To view Four Glass Artists in person at the D’Amico Studio make an appointment at theartbarge.org.

Movers And Shakers: Part One

Charity Joy Robinson was excited to talk about her new Afro-Caribbean dance mix-up, held at ... 21 Jan 2020 by Staff Writer

Customers give Irina Ourusoff pictures of their dogs and cats and she’ll happily convert their ... 3 Jan 2020 by Kelly Ann Smith

The kambô practitioner cut lines of finely ground mapacho in the palm of her hand ... 25 Nov 2019 by Staff Writer

A War Hero, My Hero

By Kelly Ann Smith Guild Hall has brought Caitlin Doyle home. She left her parents’ ... 2 Nov 2019 by Staff Writer
Sign in to comment