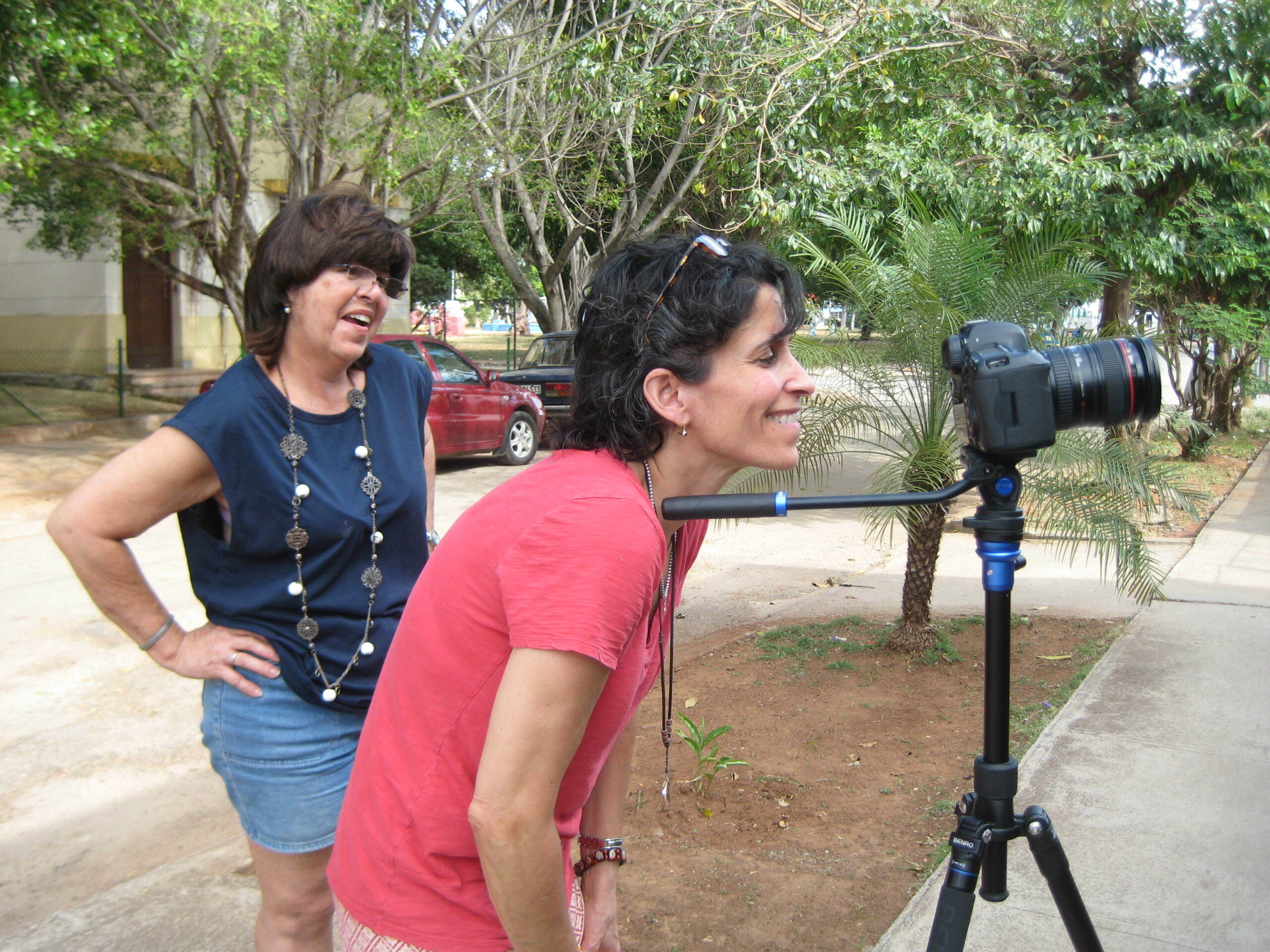 Christiane Arbesu on location in Cuba with her cousin Mimi. COURTESY THE ARTIST 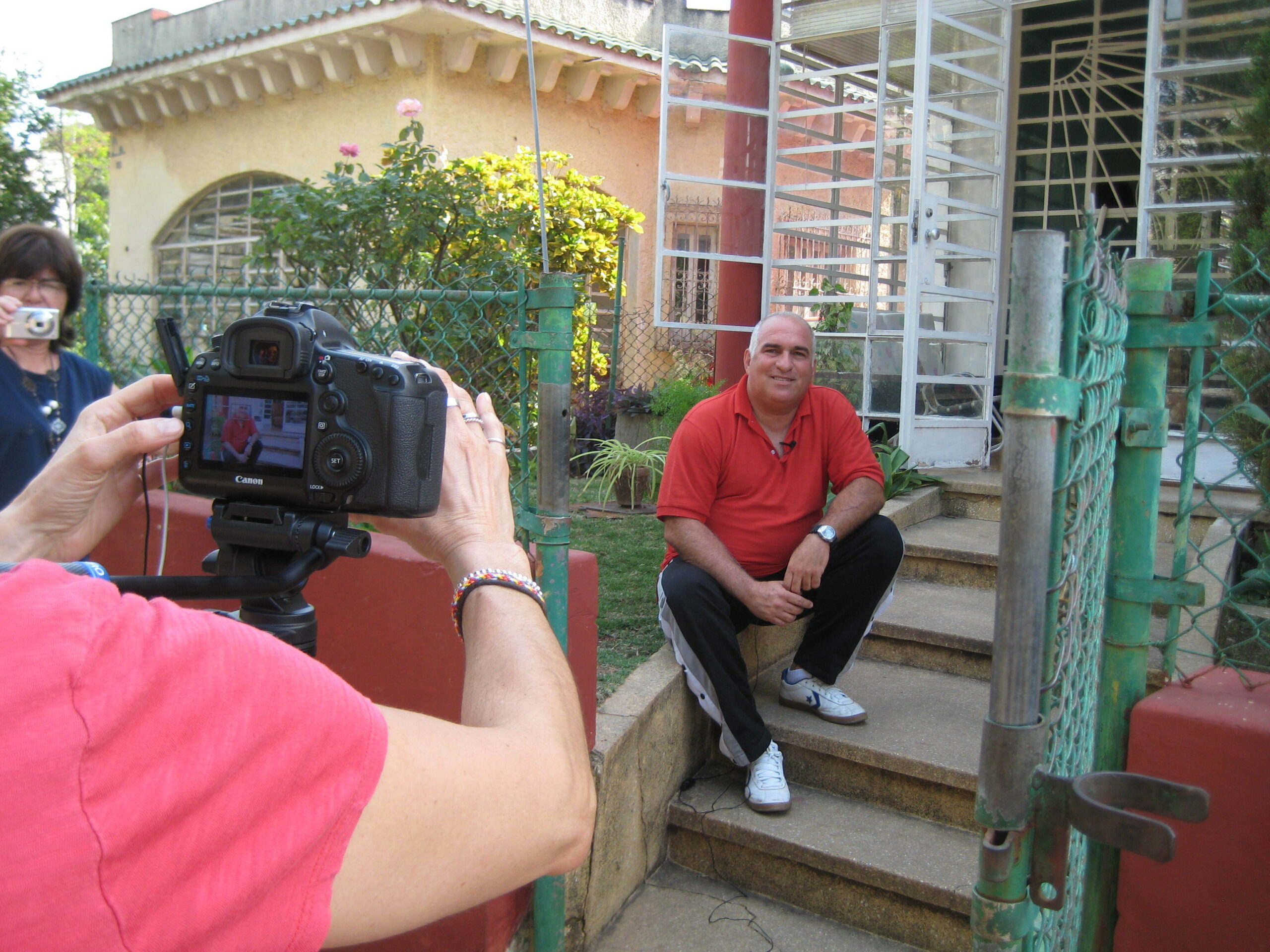 Christiane Arbesu on location in Cuba with Juan Carlos. COURTESY THE ARTIST 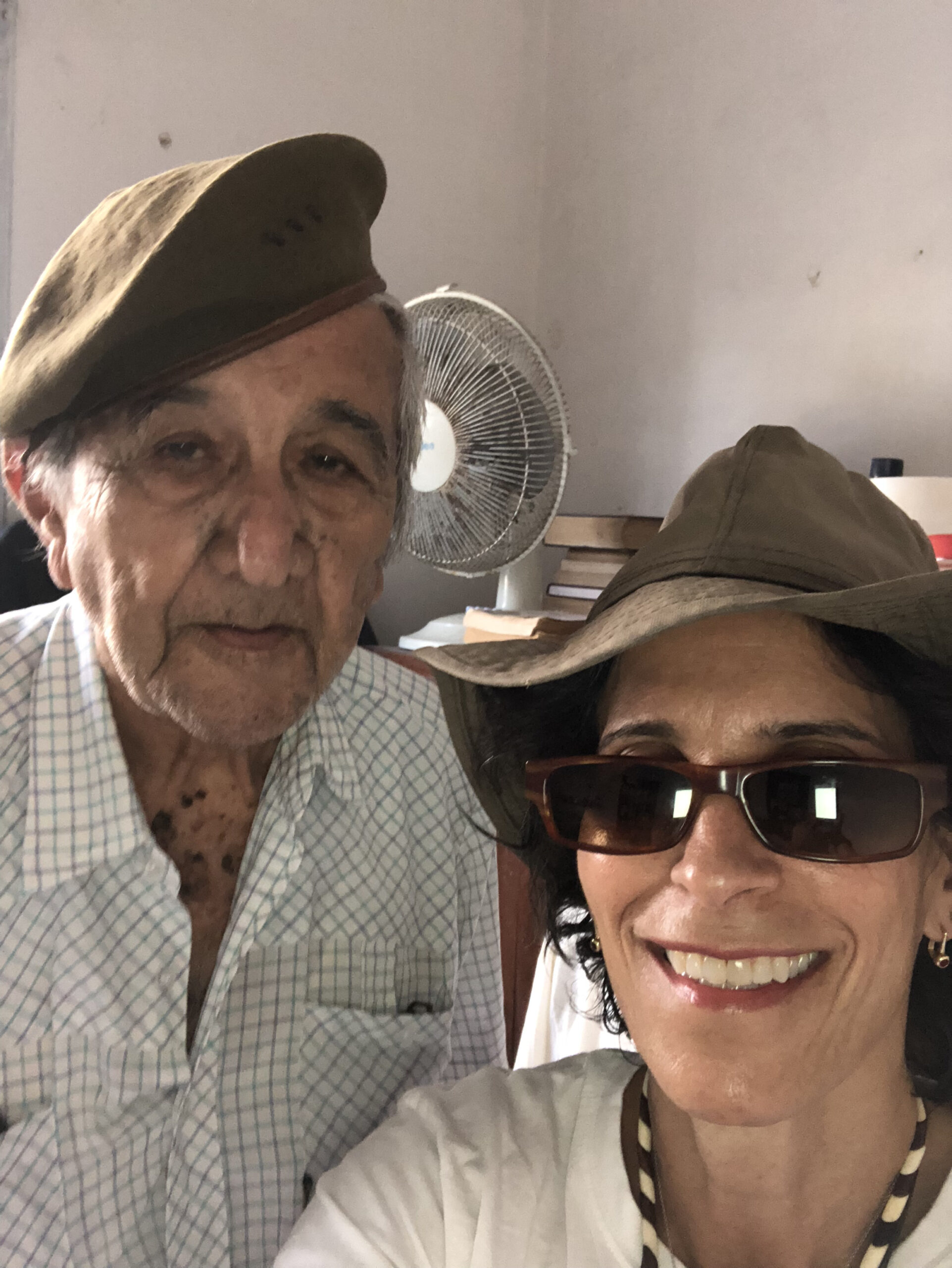 Christiane Arbesu on location in Cuba with Mafo. COURTESY THE ARTIST 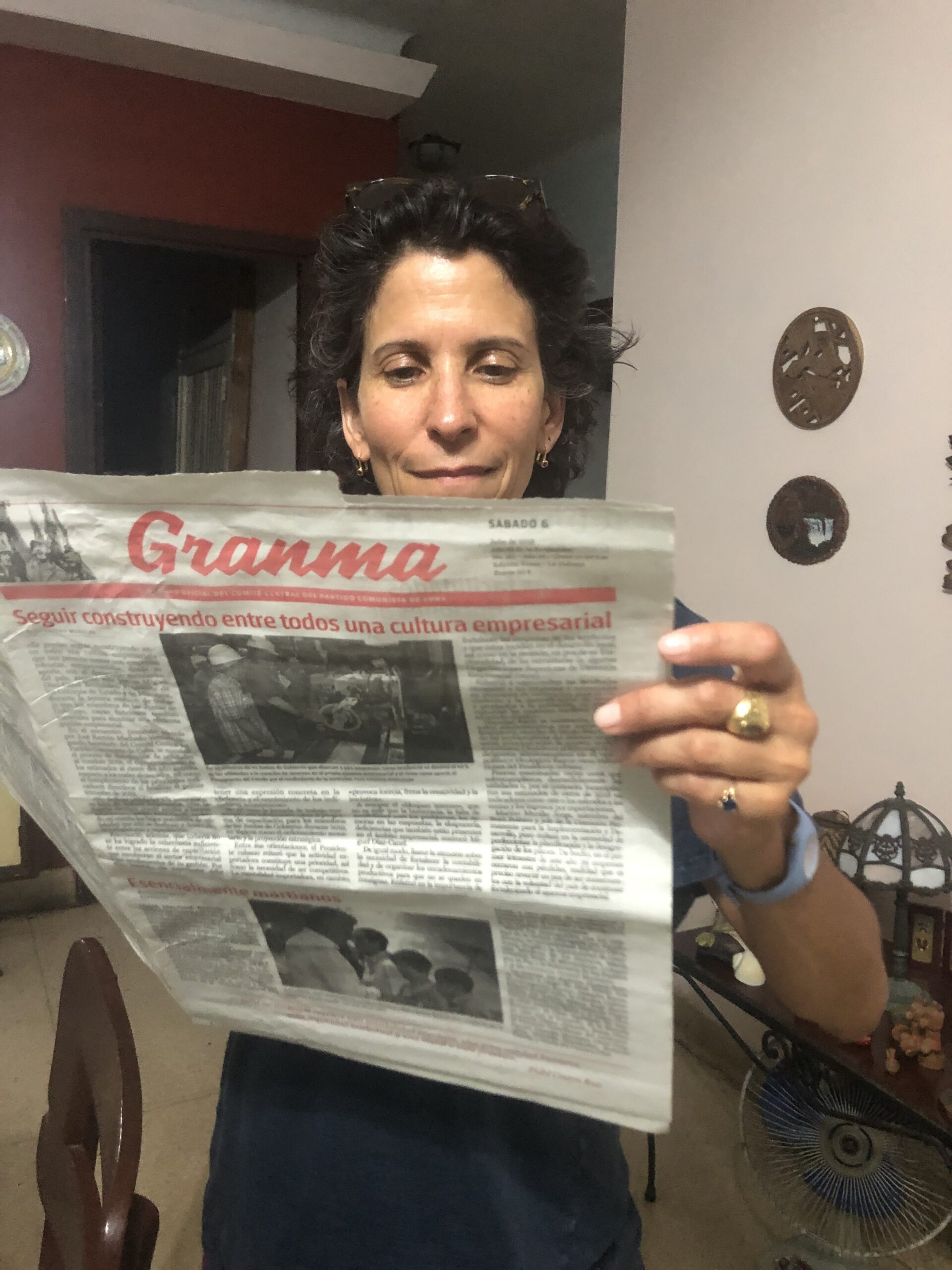 Christiane Arbesu on location in Cuba with a copy of the newspaper Gramma. COURTESY THE ARTIST 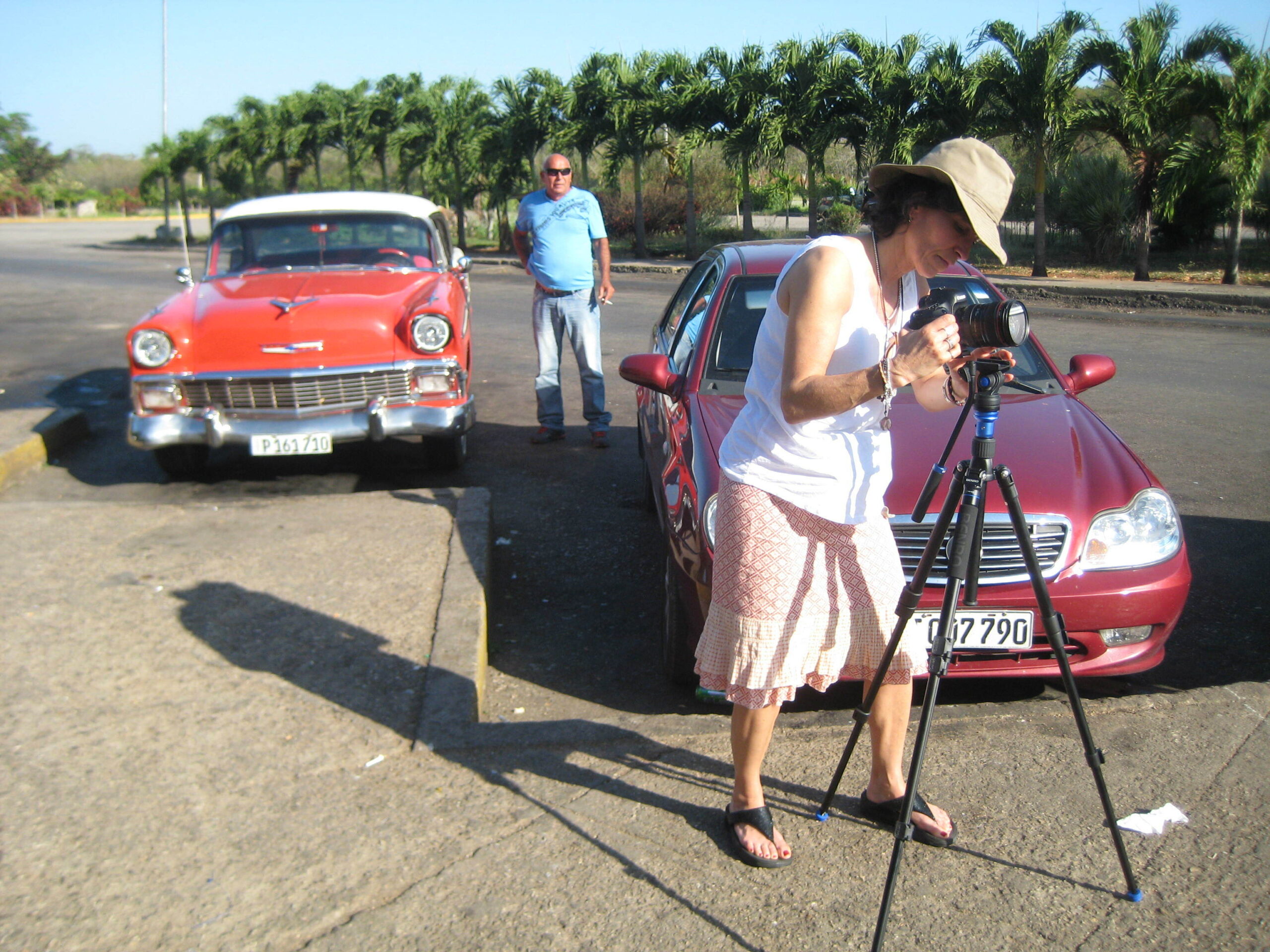 Christiane Arbesu filmin on location in Cuba. COURTESY THE ARTIST 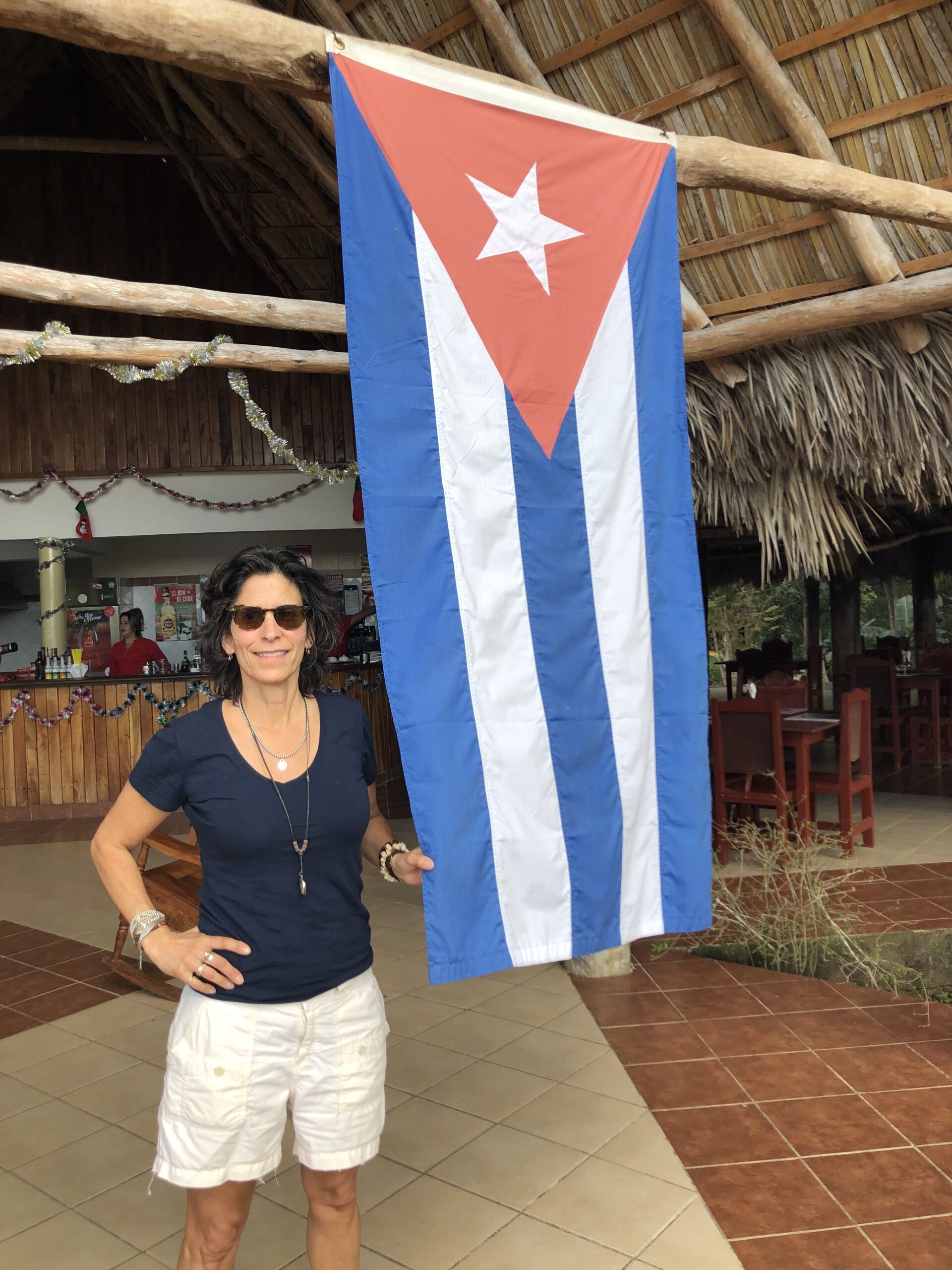 Christiane Arbesu on location in Cuba. COURTESY THE ARTIST 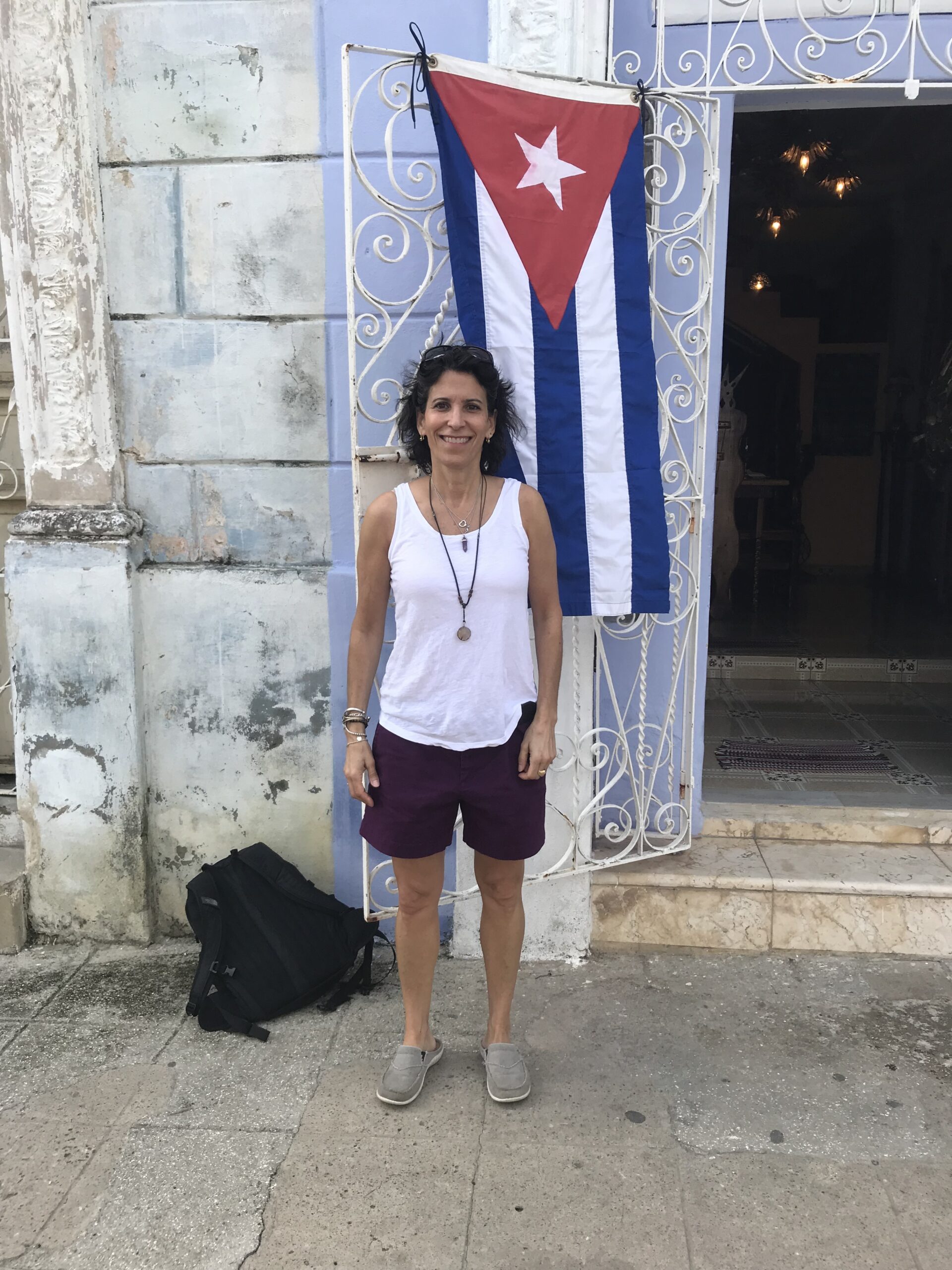 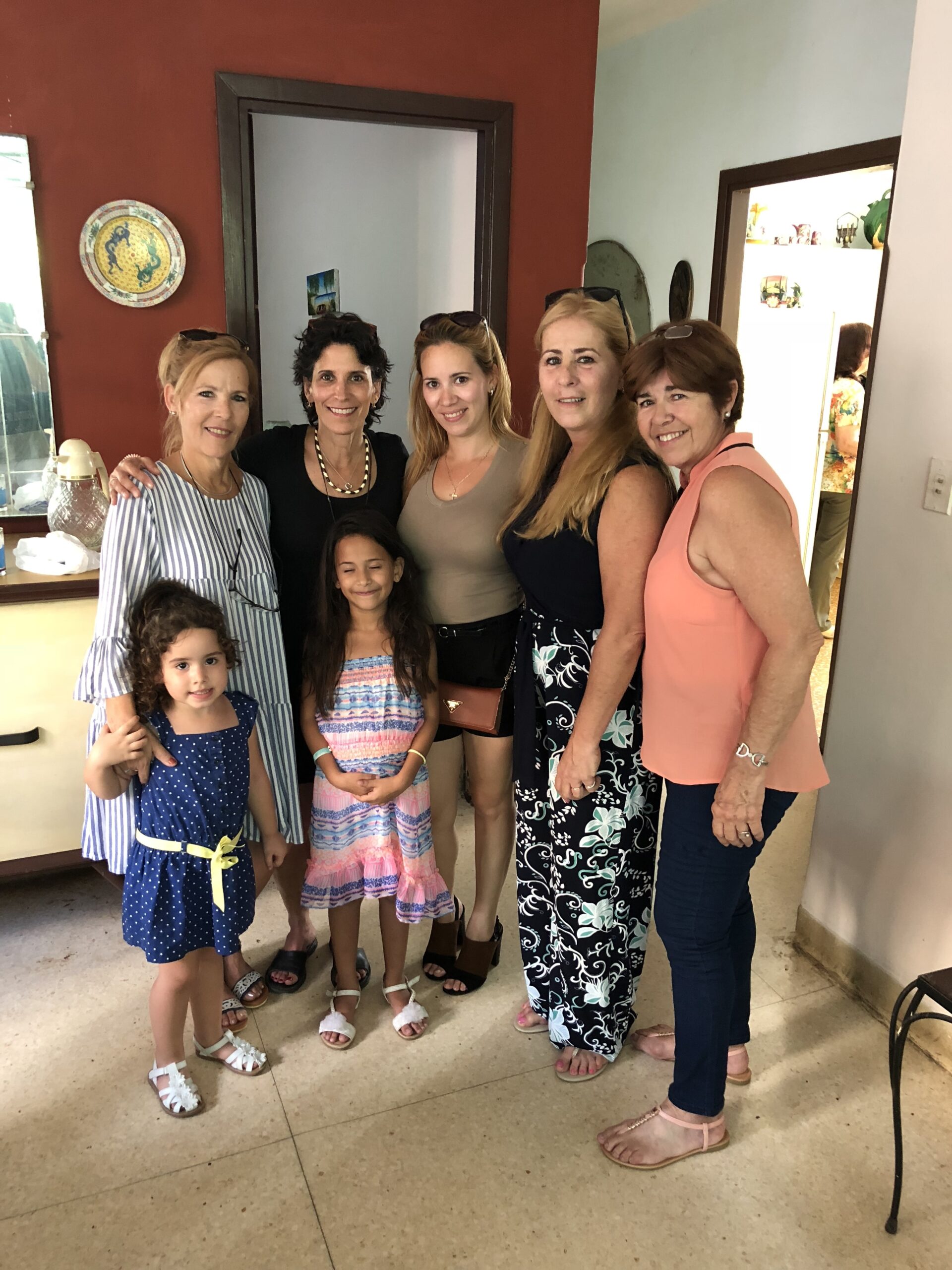 Christiane Arbesu with family in Havanna, Cuba, including cousins and second cousins. COURTESY THE ARTIST 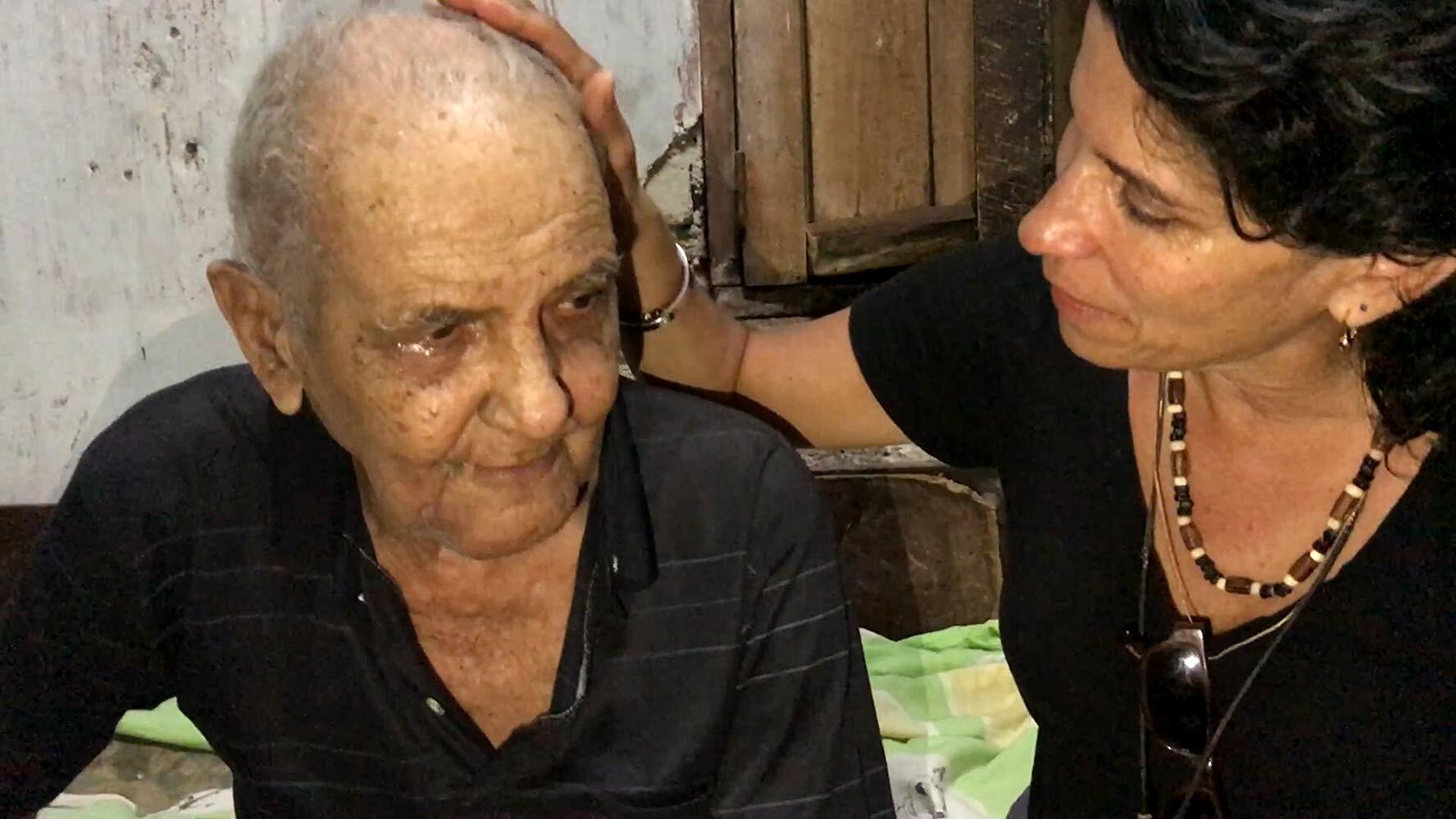 Christiane Arbesu with her uncle Conrado in Camagüey, Cuba. COURTESY THE ARTIST 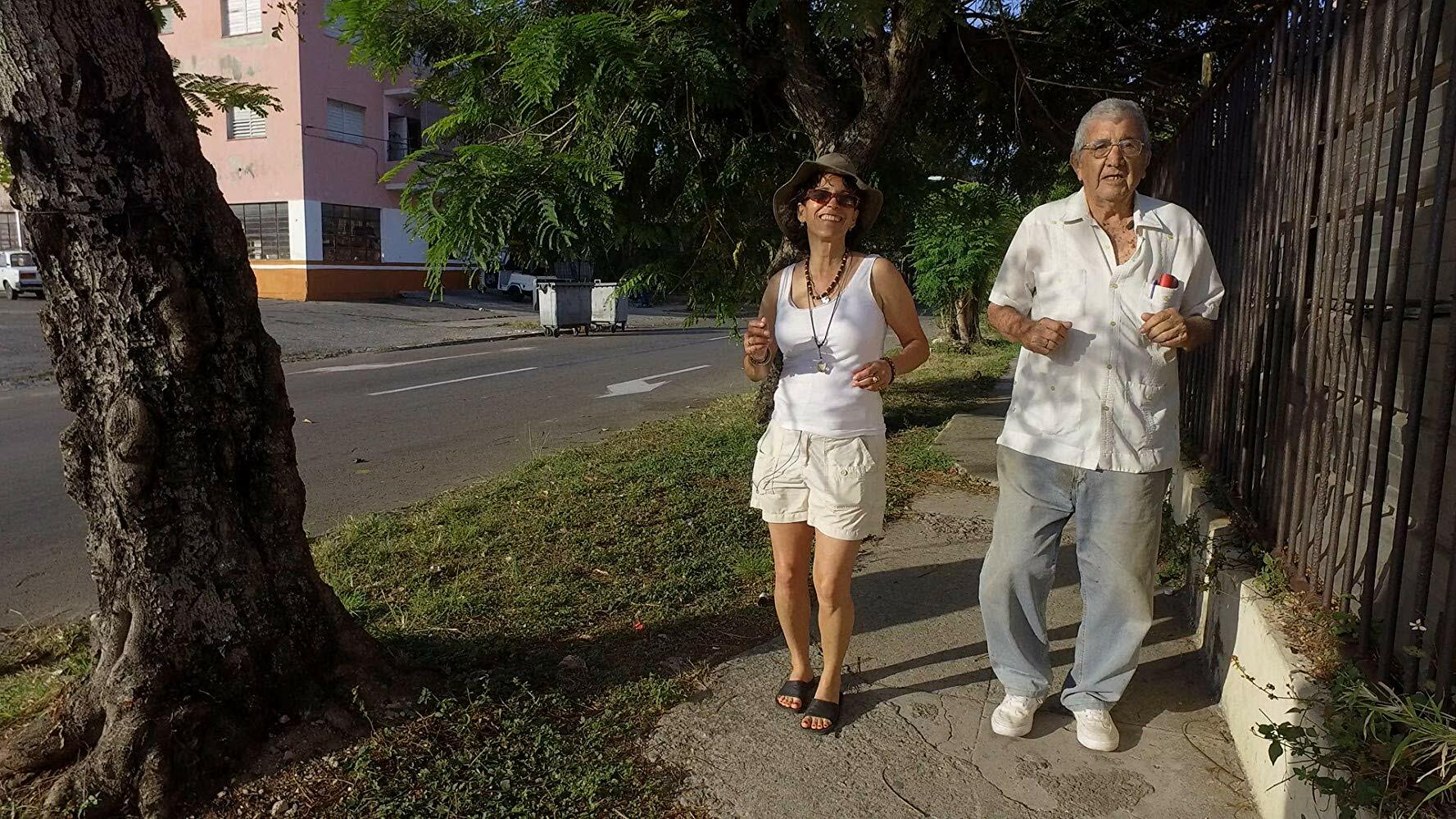 Christiane Arbesu dancing with Mafo, her aunt's ex-husband, in Cuba. COURTESY THE ARTIST 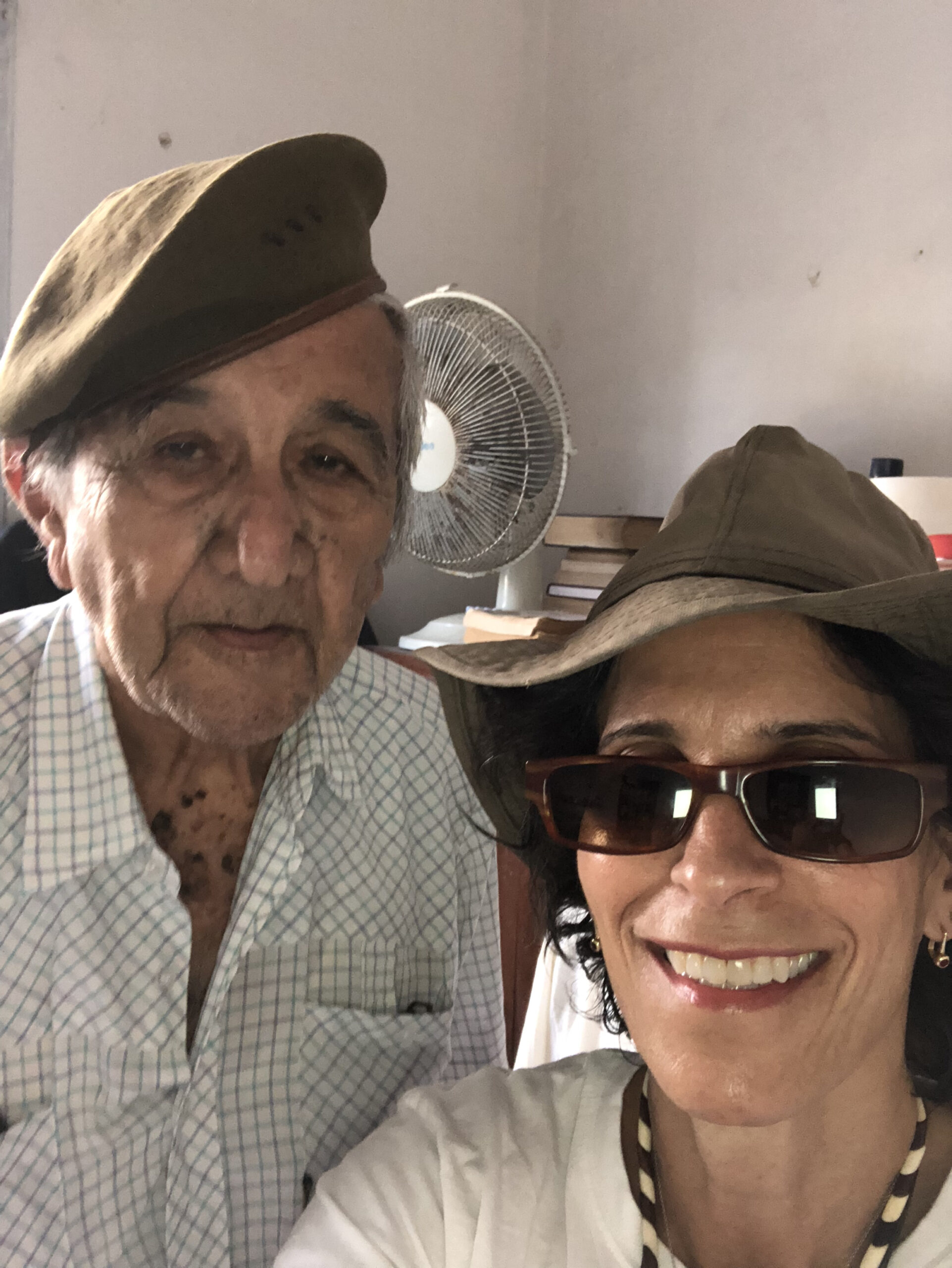 Christiane Arbesu on location in Cuba with Mafo. COURTESY THE ARTIST

Christiane Arbesu had no idea what to expect when she stepped off the Jet Blue flight that had carried her from New York City to Havana on her first visit to Cuba, the country of her parents’ birth. It was 2016, right after travel restrictions from the U.S. had been relaxed under President Barack Obama. Though the flight from JFK was only four hours, in truth, it took her back more than 50 years, to the last time her parents had been in their homeland.

Though she wasn’t sure how she would be received by the many family members her parents had left behind, as a filmmaker, Arbesu, who lives in New York City and Hampton Bays, knew she had to bring along a camera to document the visit that would introduce her to some relatives she had never met and others she never even knew existed.

“I was worried and afraid they’d see me as a rich Canadian/American,” recalled Arbesu in a recent interview. “But I was completely and utterly shocked that they received me with open arms and nothing but love. It was fantastic.”

“I Am Arbesu,” is the filmmaker’s hour-long film documenting her journey to Cuba, a place she had never been, yet one that was embedded in her DNA through her parents, Dr. Benigno Arbesu and his wife, Nizidia — Cubans who fled their homeland in 1962 before Arbesu was born. On Tuesday, July 5, at 6 p.m., “I Am Arbesu” will be screened at the Southampton Cultural Center followed by a Q&A with the filmmaker.

Arbesu’s family story begins with Benigno, who played an integral role in the Cuban revolution by leading a student movement that helped topple the Batista regime in 1959. He and Nizidia believed in the social change and democracy promoted by Castro during the revolution and from 1959 to 1962, Benigno served as the first Cuban ambassador to Indonesia where he, Nizidia and Arbesu’s three older sisters enjoyed a life of luxury as diplomats living abroad. But in 1961, Castro embraced communism and Benigno and Nizidia found their values no longer aligned with that of their leader. Like so many other Cubans who feared what communism would bring, they chose to leave the country permanently.

In 1962, Benigno and Nizidia defected to Montreal, Canada, with their three daughters and sought political asylum. Initially, Benigno didn’t expect communism to last more than a few months in Cuba and he believed that he would soon be returning home with his family. But that’s not how things played out, and a year later, Christiane Arbesu was born in Montreal as a Canadian, not a Cuban.

“He had talked to diplomatic friends in Cuba. All the big posts were being given to the communists,” Arbesu said. “All the rich, all the influential people knew what was coming. My mother’s family was wealthy and lived in Camaguey, but they took everything away and were only left with one big house for all of them. My grandfather died right after that.”

Despite having escaped Cuba, Arbesu notes that life in Canada was not easy for her family. Because her father had never denounced the Cuban regime, he was suspected of being a spy, and despite having a Ph.D. and experience as an ambassador, he could not find a professional job. He ended up working as a janitor at Magill University, and later, in real estate, while Nizidia became the family’s primary breadwinner after securing a position as a translator at the United Nation’s International Civil Aviation Organization (ICAO). It was the first job she had ever held, and she worked for ICAO for 38 years.

And neither of Arbesu’s parents ever saw their Cuban family or their homeland again.

“My cousin Mimi in Havana said they were all waiting,” Arbesu explained. “They had heard Benigno Arbesu was being recalled from Indonesia and would be assigned to a new post in Poland, and, of course, he never came back. They figured out he wasn’t coming back.”

In the years that followed, communication with Cuba was difficult, if not impossible, and though Benigno’s family received a few letters from him, they were unable to write him back or call from Cuba. Political issues had, in a very real sense, severed the family’s ties.

Fifteen years ago, Arbesu sat down with her parents to interview them on film about their lives in Cuba before it was too late. Her parents had divorced when she was young, and because her mother had early dementia, Arbesu wanted to preserve whatever memories she had of her life prior to defecting to Canada.

“I interviewed both of them in 2007. I did that first, because I knew I wanted to go to Cuba,” said Arbesu. “It’s too bad, I kept dragging my feet. By 2007, my mother had memory issues. It’s unfortunate, but I did the best I could.”

Nizidia died in 2014, while Benigno, who remarried and now lives in Houston with one of Arbesu’s sisters, recently turned 94. But because he defected, he can never return to Cuba.

During her visit in 2016, Arbesu kept her eyes and heart open and was overwhelmed by the warm reception. Her film documents her whirlwind tour of Cuba and visits to the former homes of her family, as well as the meeting of many cousins, second cousins, aunts, uncles, family friends and even close relatives who she thought had died long ago.

“I just photographed and videoed what I saw, my experience,” Arbesu recalled. “It was all kindness and caring. I didn’t know what to expect because my dad had escaped. I think that’s why they didn’t talk about it, you know you’re worried your whole family sees you as traitors.”

But during her visit, Arbesu found that was not the case and no one was really interested in talking politics. There was too much catching up to do and family stories to share. Arbesu was able to visit the graves of both her parents’ family members where she spread some of the ashes of her late mother as well as those of her sister, Rita, who had been born in Cuba.

“It was an explosion of feelings. I got to feel my mother again since she died,” said Arbesu, who even witnessed her Havana cousins cleaning the floor of their house using the same unique method that her mother always did — by attaching a towel to the end of a stick.

When she returned to New York after her visit to Cuba, Arbesu came back with memories, stories and film footage of her newfound family, which she shared with her father.

“I told him about all the people I met. I came back sad, but told him, ‘Thank you for leaving, I’m so glad you did,’” Arbesu said. “He always wondered if he made the right choice. Despite all the poverty we all lived through, it was the right decision. I’m free. We have freedom.”

Arbesu has returned to Cuba a few times since that first visit, though politics and the pandemic have once again made the short trip much more difficult. Her last visit was two and a half years ago, prior to the arrival of COVID-19. Fortunately, it’s now much easier to communicate as home internet access in Cuba has improved greatly in recent years.

“He’s happy I went to Cuba, he’s met all of them over What’s App, and he met two that are in Miami,” Arbesu said of her father’s reaction to her visit. “But I think it’s really bittersweet, because we’re all old now.

“I am Cuban,” she added. “I’m so glad I went, and I can’t wait to go back. I have four suitcases of chocolate, coffee and candy ready to go.”