Let’s Talk Arts: Author Eva Salzman Returns To Her East End Home To Present An Evening Of Music And Poetry 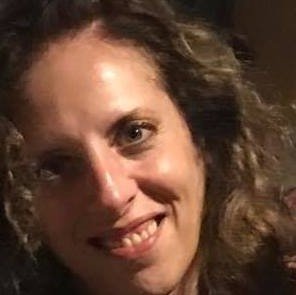 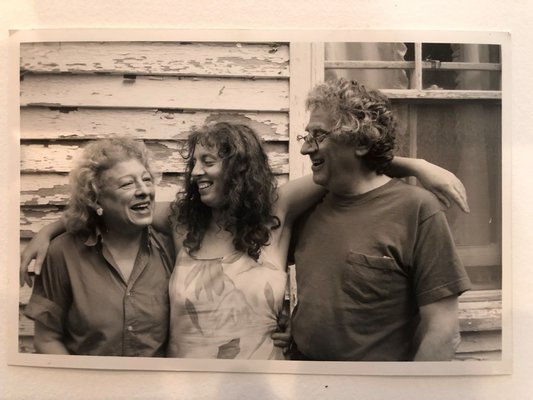 Eva Salzman, center, with her parents Lorna and Eric Salzman in front of their Quogue family home.

Poet, author and educator Eva Salzman lives and teaches in London these days. But she grew up in New York where she spent many of her formative years in Quogue with her parents, Eric and Lorna Salzman. On Saturday, September 14, Salzman will return to the turf of her youth to take part in “Voices of Poetry and Muse of Blues” at the Southampton Cultural Center (SCC). The evening performance includes a collection of poets, Salzman among them, reading from their work which will be intertwined with music by Irish-born vocalist and composer Christine Tobin.

Q: Can you tell me about the event coming up at the SCC? How did it come about?

Last year, Kirsten [Lonnie], the [Executive] Director of SCC, and I talked about the collaborative events Christine Tobin and I have been doing. Performances that combine music and poetry often present these forms side-by-side, but separate. Some of the September 14 performances will do that, but we’ve also been trying to integrate the two forms in more interesting ways, and not just for the hell of it.

Literature is the poor relation among art forms, and poetry is its poor relation. It’s well down the food chain, yet simultaneously often regarded as elitist and inaccessible. Plato highly valued the form, but he may not be the best salesman.

All forms of poetry are, or should be, performance art and should entertain, not just make you weep with despair — though that can be cathartic too. Perhaps due to my own eclectic background, I’ve long specialized in cross-arts projects, and like to collaborate. So, I thought why not invite “Voices of Poetry” too? Call it strength in numbers. Kudos to Kirsten too for being open to hosting poetry, which I sometimes refer to as minority sport.

Q: Are you performing the show locally because of your strong connection to the area?

I’m guessing, yes. Around 70 years ago, my grandfather actually built a house in Hampton Bays which I believe still exists, though as part of a bigger structure. My grandparents then bought their property in East Quogue on the bay, which is still in the family. My father grew up spending summers out here and so did I. There was no sushi restaurant back then. There used to be a diner and Silver’s Stationers. A few of the older businesses remain, like the hardware store. Hardware stores seem to be the stores most likely to endure through the times out here.

Q: Can you talk about the structure of the show and how the poetry and music are presented together?

Some of the evening will be a more traditional format, as I said. What Christine and I may do, however, is mix things up a little, interweaving the music and words, for example, or reading a poem followed by the performance of its musical setting. Christine allowed me to sing a note once too, but I can’t be sure she’d wish to repeat that experiment.

Q: Can you tell me about the other writers and musicians taking part in the show?

Jessica Greenbaum and Michael Klein are both award-winning acclaimed poets. The composer/pianist Angelica Sanchez has been lauded in Jazz Times and New York Times. It’s such a pleasure to share the stage with such acclaimed artists. It’s like playing tennis with better players. Hopefully it ups my game.

Q: Describe the poetry you will be presenting during the show.

I’ve not done my set list yet. It’s not unlikely I’ll bounce off the other readers and musicians too, even changing my ideas. The instruments might prompt a change. I’ve never worked with Angelica. Process has always interested me, as much as performance itself. I hope to read at least one Long Island poem. In fact, my very first publication ever was a poem about Shinnecock Inlet and the invisible boundary between bodies of water. Upon receiving the journal, I tore open the package, excited to see my name and work in print. There it was! The magazine was called Yellow Silk. But then I noticed its sub-title: A Journal of Erotic Verse. What? I thought. For God’s sake! I hadn’t written a poem about sex. Then I read my poem again. Yeah, I had. The unconscious rules.

Q: Has this show (or a version of it) been performed elsewhere as well?

It all started when I was a guest on Christine’s British Council tour a year or so ago. Then, at our performance at The Cell Theatre in Chelsea, New York, we experimented further, not exactly in an Allen Ginsburg Beat Generation way — I’m an aspirational hippie only — but in a more consciously crafted and designed way.

Q: Where did you meet Christine Tobin and what is it about her music that appealed to you?

I met Christine many years ago when she was featured on a CD produced by Scottish poet and musician Don Paterson, my boyfriend at the time. She has become very well known since then in her own right for her jazz covers, original compositions and settings of poets such as Paul Muldoon and Yeats, so I’m in good company … And she’s from Dublin which is a great city and I’ve always loved the Dublin accent!

Q: What type of audience do you expect the event to attract?

Apart from the family and friends who have been bribed, we hope to lure along music lovers as well as poets and readers, and perhaps even some people less used to listening to poetry. We promise to be gentle. We promise to behave and be welcoming. Or to misbehave in seemly ways that might make for a fun evening.

Q: Your father, Eric Salzman, who died about two years ago, was a composer and a legendary birder in these parts. He led a lot of nature walks and had an amazing talent for identifying bird song in the wild. How would you say his talents and passions influenced you, creatively speaking?

One day he read a poem I wrote which describes a great egret lifting off from the marsh. I think I used the image of a 747. He commented on the incisive exact observation, but his was used for bird-watching. There was a memorable occasion in the Pyrenees with my parents when we saw a lammergeier, a huge vulture-like bird. Another memory — until my niece came along, I was the only one who enjoyed clamming with my father who, himself had learned this from his father. Rooting around for clams with your bare feet isn’t to everyone’s taste. Of course, I wrote a poem about it.

Q: Tell me about your time studying with the late Irish author Frank McCourt. What did he teach you about the craft of writing?

I had him as an English teacher at Stuyvesant, a math and science high school in the city. In fact, so did Neil Silberblatt who heads “Voices of Poetry.” Every Friday, Frank asked our class who had something to read out loud. Silence. Crickets. Many took his class because he gave everyone a 96. He was easy on students there, us, knowing how demanding Stuyvesant was. So, I was the only one waving my hand around, dying to read out my adolescent outpourings. Other than this, Frank told us stories about his poor Limerick childhood. It turns out he was rehearsing his book “Angela’s Ashes,” which would make his fortune and name. We were his guinea pigs.

Q: Can you expound on your life in Quogue? Are you excited to be coming back to the area?

Always, and very much so. One reason is my relationship with the grandparents who had bought this house for us all to use during the summer. They were special people and I was very close to them. This was their legacy and gift to us, gift to my writing too. The longer I’ve been away from Long Island the closer I feel to it. Paradoxically, distance can evoke a more profound intimacy with and understanding of a place that is also more reflective and enduring. Quogue was never just a summer place. It sounds cheesy, I know, but when I left this country a large chunk of my heart and soul got left behind there.