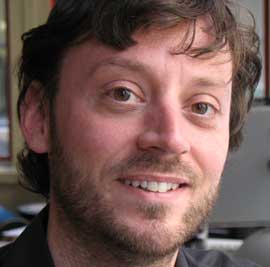 When David Nugent walks into a crowded room, it doesn’t take him long to find an important hand to shake or a familiar face to engage in conversation. That’s partly due to his personality: confident, curious, eminently friendly.

Mr. Nugent is the new programming director of the Hamptons International Film Festival. Two weeks ago, he spent most of his evening and nighttime hours exercising his networking skills as he skipped from panel to party at the Tribeca Film Festival in New York, creating and strengthening relationships he hopes will pay off this October for the 16th edition of the Hamptons festival—the first solely under his programming control—and for years to come.

On a recent Wednesday night, he was standing in the middle of the Tribeca Cinemas Gallery, an event awash in colored lights, upbeat music and filmmaking chatter, the site of a party thrown by the Alfred P. Sloan Foundation, a nonprofit that supports a few film festivals, including Tribeca, Sundance and HIFF.

Mr. Nugent’s presence was an implicit thank you to the foundation and a chance to connect with more industry people. He had spent the earlier part of his evening at a party for the Independent Film Channel, and he had about a half hour before he needed to head cross-town to a reception hosted by A&E.

As 100 people milled around the gallery, Mr. Nugent estimated he knew half of them. He said his hellos and struck up conversations with a select few.

Between bites of ham-and-cheese finger sandwiches topped with a quail egg (“dinner,” as he reluctantly termed it), he was asked by one filmmaker friend named Wendy what films he had enjoyed at the festival.

“I don’t get to many films,” he admitted. Movies that screen at Tribeca generally aren’t considered for presentation at HIFF—the festivals attempt to attract the same crowd—so hours spent watching films would be time he couldn’t devote to meeting people in town for the festival, learning about works in progress, lobbying for HIFF as an East Coast launching pad, and, to a lesser extent, drumming up new sponsorships or partnerships for the festival.

Wendy mentioned a new documentary her friend was working on, which she promised was going to be “very powerful” when completed. Mr. Nugent smiled and asked to be kept advised of its progress. Then he headed to the bar.

Mr. Nugent is thin and boyish, with wide eyes and, depending on how you define your terms, either thick stubble or a sparse beard. He keeps a small notebook in his pocket to jot down names, working titles for projects and other bits of info he picks up in the course of an evening.

He grew up along the coast of Maine, earned a master’s degree at Boston University, and for the past few years has been teaching film studies classes at The New School in Manhattan. Prior to joining HIFF, he served as programming director at the Newport International Film Festival in Rhode Island and as program director for DocuClub, an organization that helps documentary filmmakers finish and finance their projects.

Across the room, Karen Arikian, HIFF’s new executive director, was speaking with a German filmmaker whose latest movie had received its North American premiere at Tribeca. Ms. Arikian had been living in Germany, serving as co-director of the Berlin International Film Festival’s European Film Market before she joined the HIFF staff and moved back to New York.

“Karen still has solid European contacts,” Mr. Nugent noted. He said he plans to continue to emphasize foreign films at HIFF, a focus that his programming predecessor, Rajendra Roy, developed during his tenure. “I’ve convened a programming advisory committee so people are watching films for us all over the world.”

Ms. Arikian introduced Mr. Nugent to the German filmmaker, who handed Mr. Nugent a promotional card for his film. He slipped it into his pocket.

Then Mr. Nugent made one final sweep through the room and collected two of his party-going colleagues—programming coordinator Cara Cusumano and development manager Beth Gilligan—to head to the A&E reception, about a mile away at the Rivington Hotel on the Lower East Side.

During the walk, Mr. Nugent reflected on the business of programming a festival.

“You can’t just program from what gets submitted,” he said. “That’s only part of the game.”

To date, the festival has received about 600 submissions, he continued, and he expects the final count to be around 1,600. Many of the short films the festival screens will come out of these unsolicited submissions, but features in the HIFF lineup are much more likely to be from filmmakers Mr. Nugent knows, if not the result of direct negotiation. “That’s why it’s important to be doing this,” he said of heading to his third party in less than two hours.

And that’s why he and a couple of his fellow staffers are flying to Cannes this week to take in one of the world’s premiere film festivals. It will be his first trip to Cannes, which was scheduled too close to the Newport festival for him to attend in years past.

“We’re all fighting over the best films,” he said. “It behooves me to know what films are out there before other people, and who’s interested in bringing a film to the Hamptons.” Unlike at Tribeca, films that screen at Cannes are prime candidates to play at HIFF.

Mr. Nugent finds it easier to recruit for HIFF than the Newport festival. “I really enjoyed my time in Newport but it was a bit smaller and had less of an industry presence. It’s a little tougher to get people to come to it.”

“I thought last year’s [HIFF] was great, but I am quite confident this year will be better,” he said.

The group arrived at the Rivington Hotel, and Mr. Nugent immediately began chatting up editors for film magazines, friends from film festivals he’d attended and filmmakers who talked about their current endeavors.

During one moment of calm, Mr. Nugent turned and quipped: “One more drink and I’m going off the record.”

He headed for the bar. A minute later, he was locked into a new conversation, and “We Can Work It Out” blared out of the lounge’s sound system.