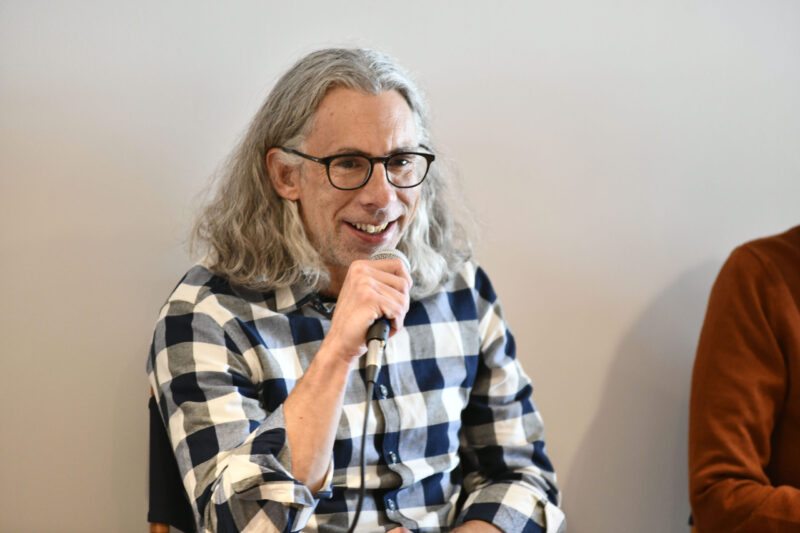 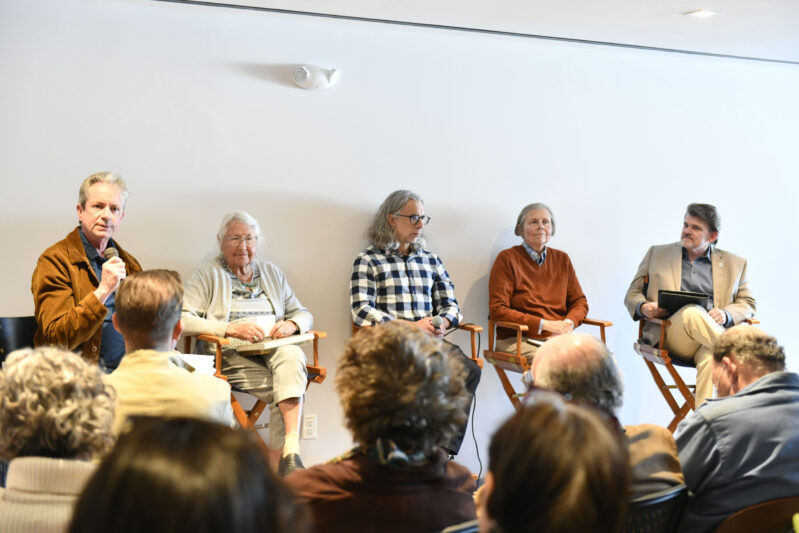 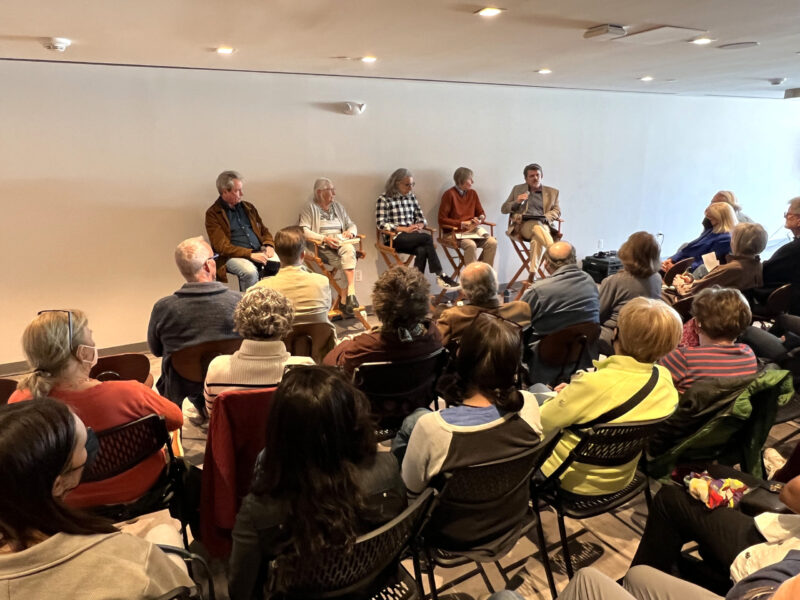 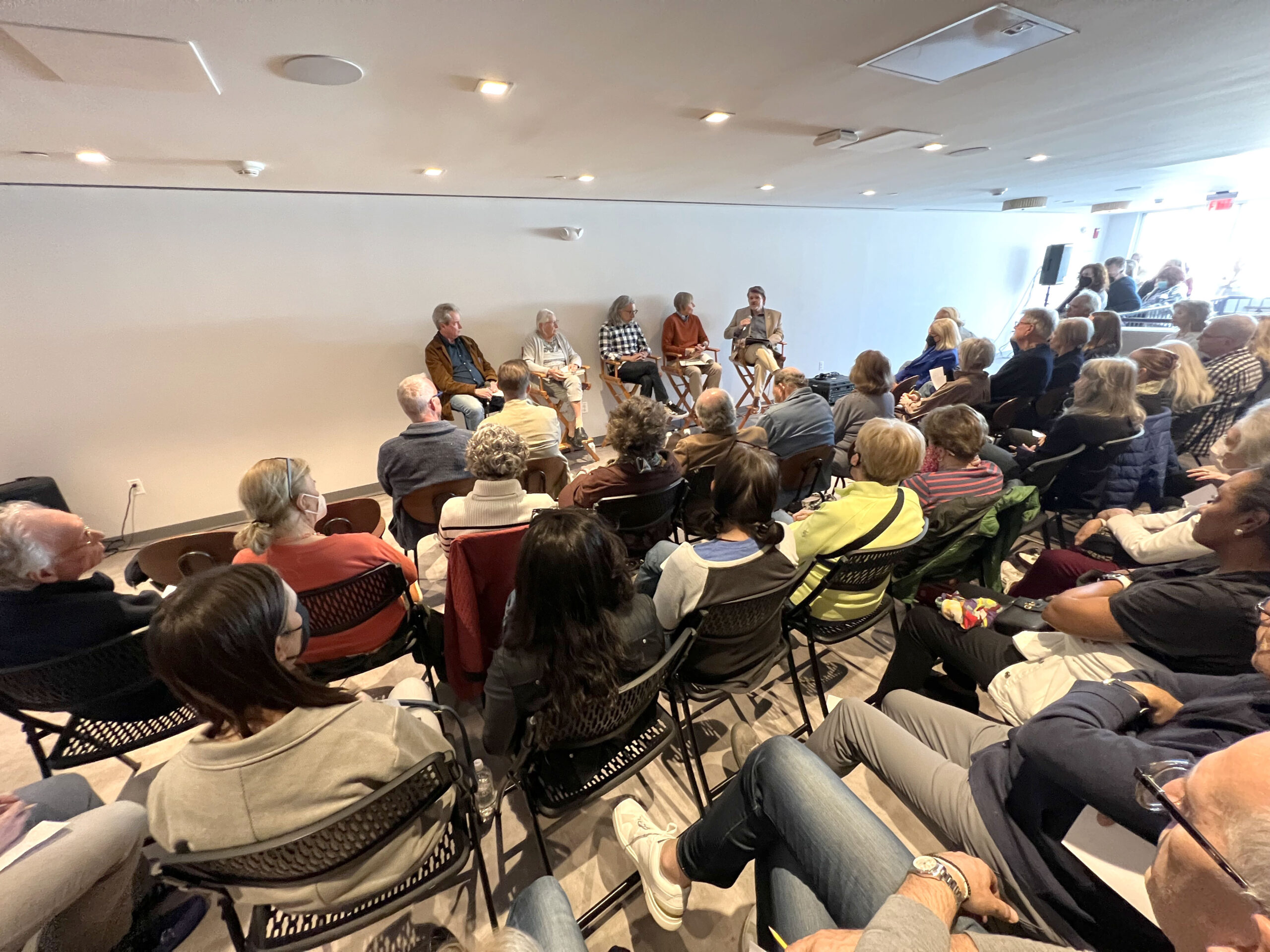 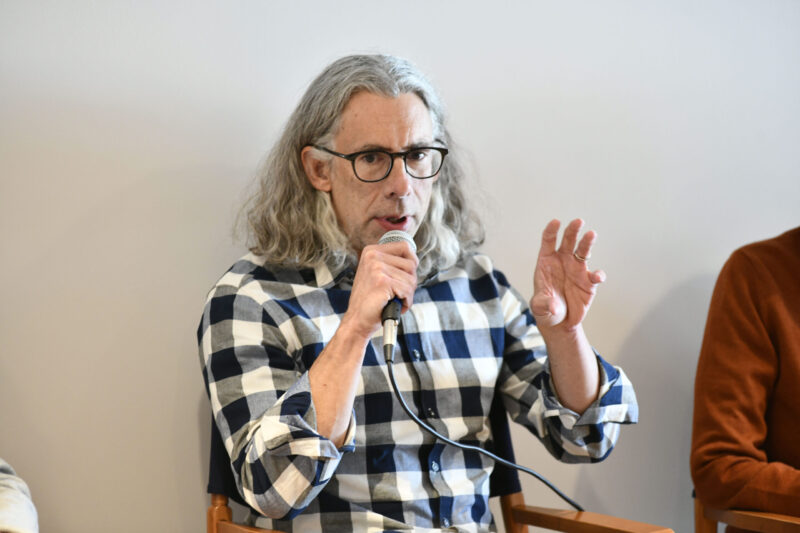 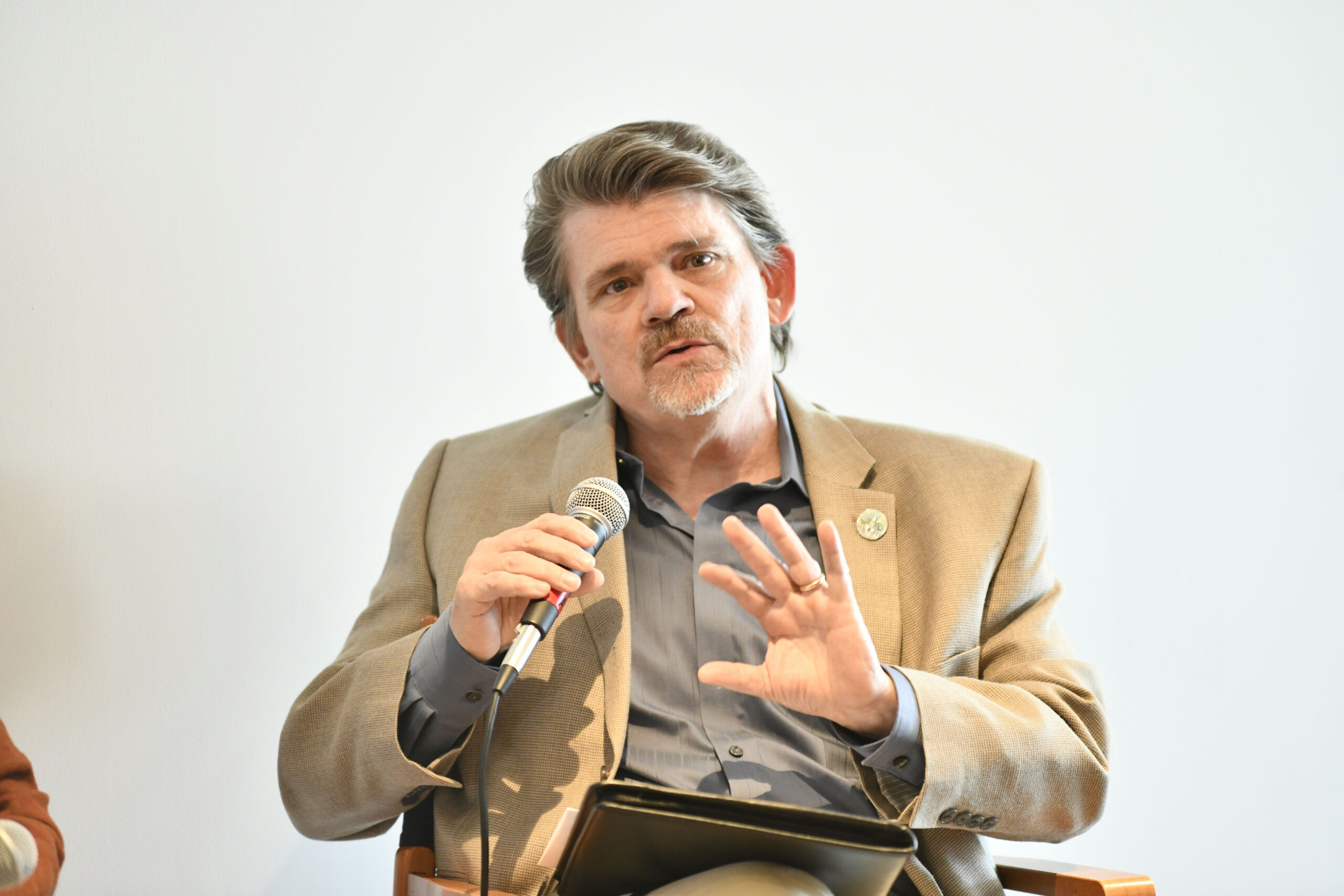 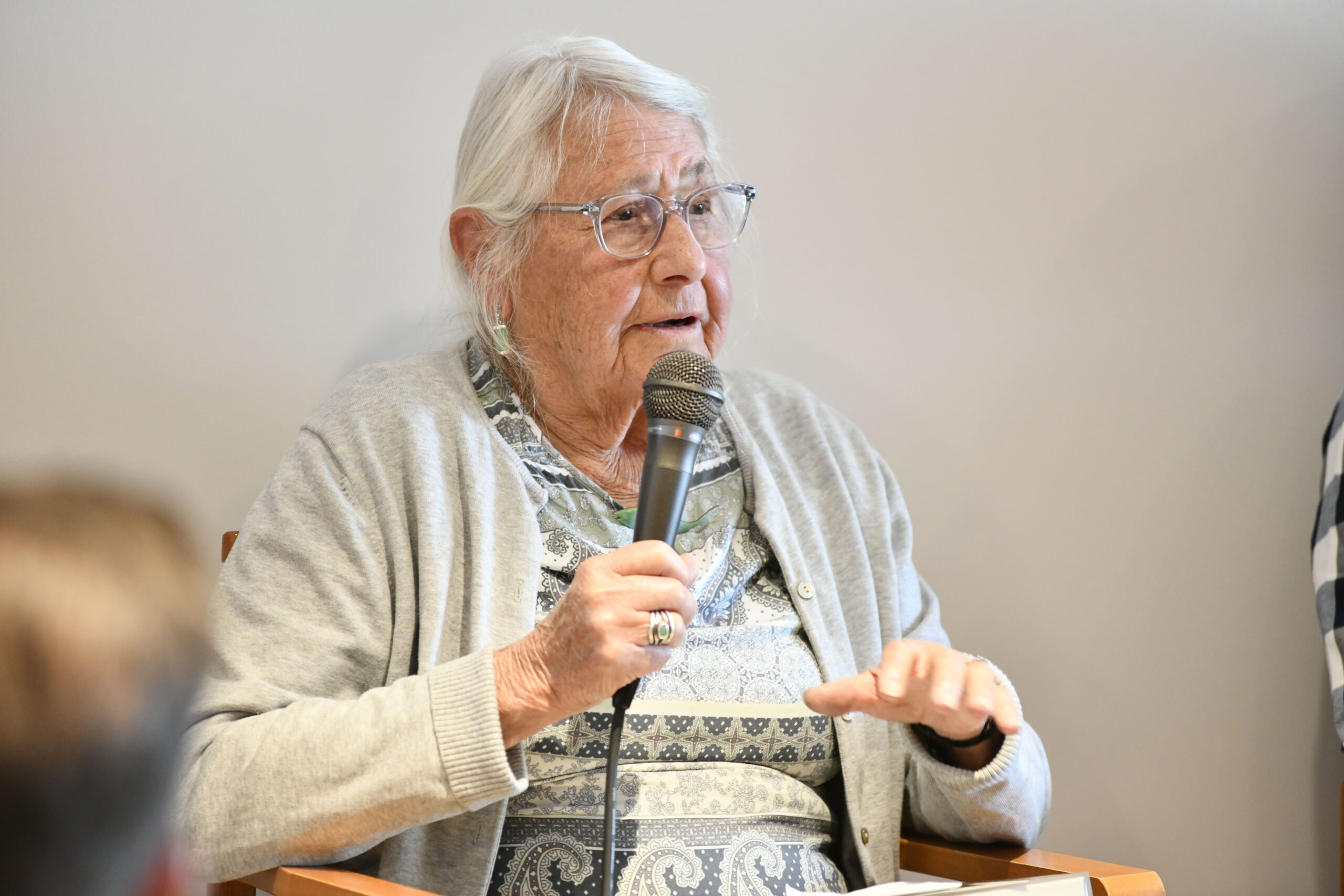 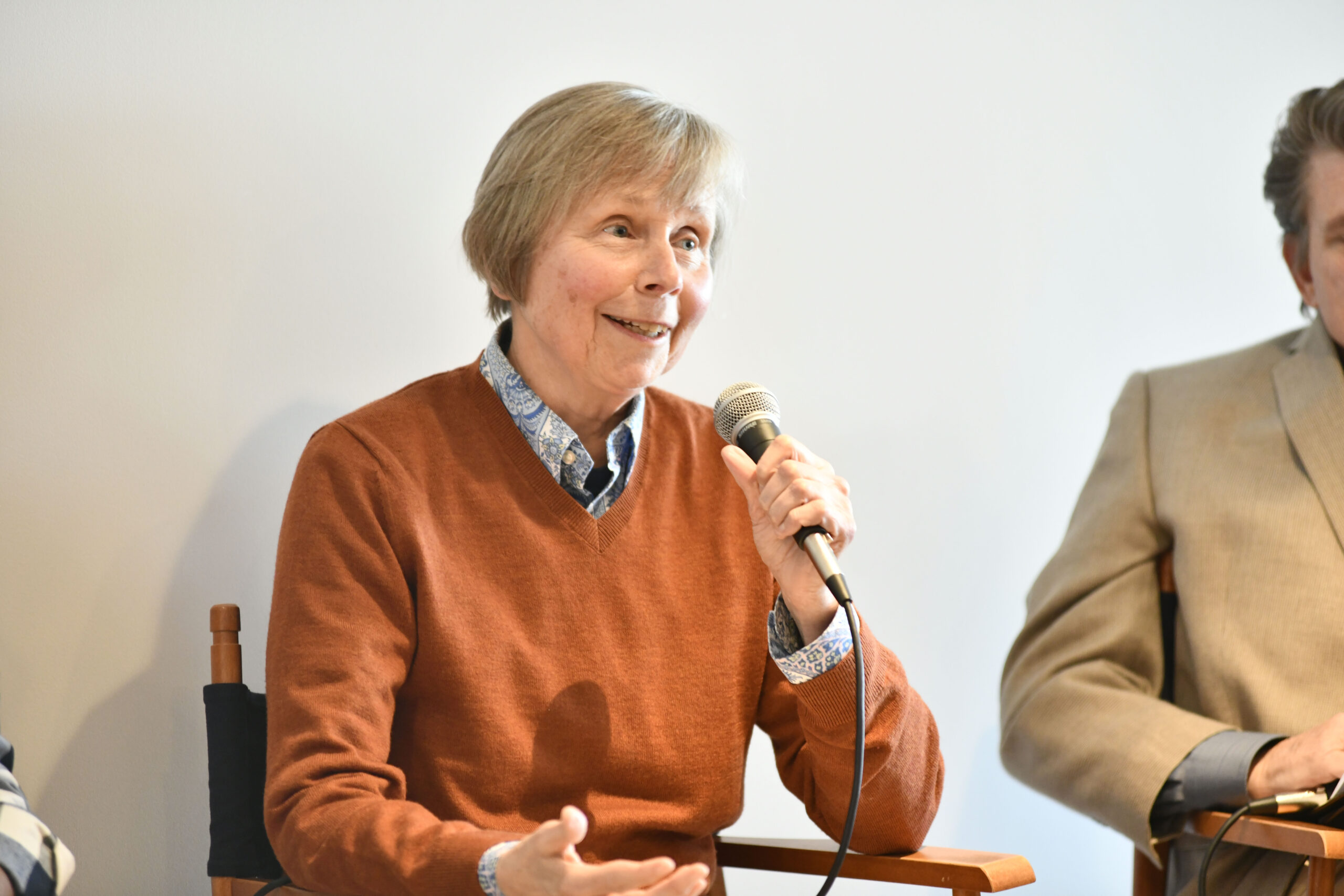 The novelist Bret Anthony Johnston, who is also the director of the Michener Center for Writers at the University of Texas, gave Sag Harbor residents a preview of his vision for the John Steinbeck Writer’s Center that has been proposed for the Nobel Prize-winning author’s Sag Harbor home at a “Projections” panel discussion at the Sag Harbor Cinema on May 1.

Johnston, who has run writing programs for 20 years, described what a writer’s retreat might look like on the property, saying that he sees “an incredibly low-impact writer’s retreat” with several writers invited each year. He said he would like to see a first-time author be given the opportunity to use the home in the fall, with a more seasoned writer there in the spring, and a literary star, “someone who is in line for the Nobel or Pulitzer,” brought in each summer, with writers visiting schools, bookstores, libraries, and other cultural centers during their stays.

“What happens while they are here is they make work that only they can make in the same way Steinbeck made work that only he could make,” whether they be novelists, poets, or screenwriters, said Johnston, who also spoke of fundraising discussions for the Steinbeck project currently underway at the Michener Center.

He added that the University of Texas has the experience and know-how to run what he said had to be a “first-rate writing retreat” if it was going to be in Steinbeck’s Sag Harbor home, the place where the late author learned he had won the Nobel Prize for Literature in 1962.

“We’re able to do that. We want to do that,” he said. “It feels like not just a privilege, but a duty to offer that.”

He added that the university would also engage the Sag Harbor community in how the site would be developed and what kind of programming would be offered.

The discussion, which also touched on memories of Steinbeck’s life in Sag Harbor, was co-sponsored by the cinema and Canio’s Cultural Café’s “Steinbeck: In Search of America” series, which will present more events in the coming months.

Joining Johnston on the panel were Nada Barry, owner of the Wharf Shop, who with her husband, the late Robert Barry, was friends with Steinbeck and his wife, Elaine; Kathryn Szoka of Canio’s Books, who launched the effort to preserve Steinbeck’s home; and Southampton Town Councilman Tommy John Schiavoni, who explained the role the town would play in buying the development rights to the 1.8-acre property. Stephen Hamilton, the co-founder of Bay Street Theater, moderated the discussion.

Soon after heirs of Elaine Steinbeck put the Bluff Point Lane property on the market early last year for $17.9 million, Szoka organized an online petition drive that collected more than 32,000 signatures supporting preservation and helped assemble an ad hoc group to try to save the property, which contains Steinbeck’s modest cottage and writing gazebo, which he named Joyous Garde, after Sir Lancelot’s castle.

Later, the Sag Harbor Partnership joined the effort, and the Pulitzer Prize-winning novelist Colson Whitehead is serving as the honorary chairman of a major fundraising effort.

The University of Texas, which has a trove of Steinbeck’s papers, and was the alma mater of Elaine Steinbeck, agreed to oversee the writer’s center as well as raise an endowment to sustain it.

Southampton Town has offered to buy the development rights, and although the price of the property has been reduced to $16.75 million, a deal has not been reached.

After coming to Sag Harbor in the mid-1950s, Steinbeck struck up a friendship with Bob Barry, who owned a marina and a hardware store in the village. Nada Barry said Steinbeck felt at home in the unassuming harbor town, quipping after seeing the Sag Harbor Yacht Club with its tiny clubhouse, “Any place that has such a small yacht club suits me.”

The author later reluctantly agreed to serve as the chairman of the inaugural Sag Harbor Old Whalers Festival in 1964, but only if villagers would agree to keep the location of his home a secret — a pact they kept, Barry said.

After Barry spoke, Szoka said it was an extraordinary experience to listen to the “personal recollections of someone who actually knew the only Nobel Prize-winning author to ever live on Long Island” and added, “It’s not an exaggeration to say no writer has ever been as integral to the Village of Sag Harbor as John Steinbeck.”

Szoka said Steinbeck had immersed himself in the village life during his time here. “He loved it because it reminded him of Monterey in California, where he grew up and because it was really an authentic community on the water,” she said.

The Nobel committee recognized him, she continued, in part, for the work he had done while living in the village, citing “The Winter of Our Discontent,” a novel based in a village modeled after Sag Harbor, as having attained the same standard he reached with “The Grapes of Wrath,” his most famous novel.

Quoting from the Nobel committee’s citation, Szoka said, Steinbeck “holds his position as an independent expounder of the truth, with an unbiased instinct for what is genuinely American, be it good or bad.”

While Szoka made the case for preservation, Schiavoni said the town’s Community Preservation Fund is intended to not only protect swathes of open space, but historic places like Steinbeck’s house as well.

He cited recent CPF projects, including Sugar Loaf Hill in Southampton which returned ancestral burial grounds to the Shinnecock Nation, as well as the purchase of the development rights which supported the successful campaign to restore the Sag Harbor Cinema.

“We do have enough money to do this,” Schiavoni said, and in an apparent reference to the concurrent effort to buy the building at 2 Main Street and add it to the John Steinbeck Waterfront Park, he added, “I don’t want folks in the community to think this is the only item that we are looking at in the eastern part of the town, or Sag Harbor. It is not.”

But, he stressed, the only way the deal could be completed is if the seller agrees to a price that will have to be met through a combination of the town’s and privately raised dollars.

In closing the event, Barry recalled an impromptu get-together at her home, at which she baked a cake to celebrate what turned out to be Steinbeck’s last birthday on February 27, 1968. He would die the following December and at his funeral, which was poorly attended, Elaine Steinbeck pleaded with Barry to keep her husband’s memory alive.

“If we can get this property, we will not have forgotten John,” Barry said.

With reporting by Stephen Hamilton