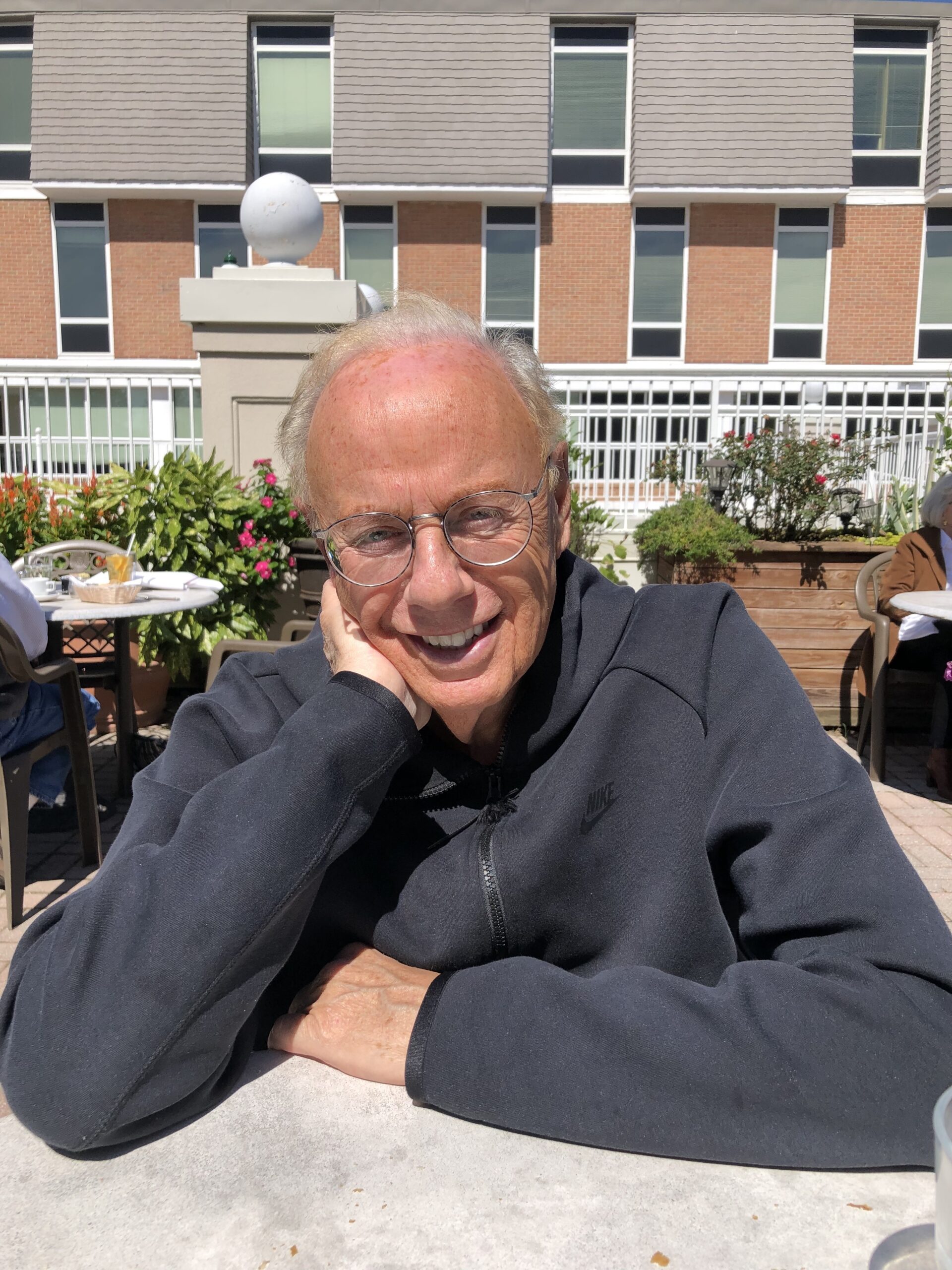 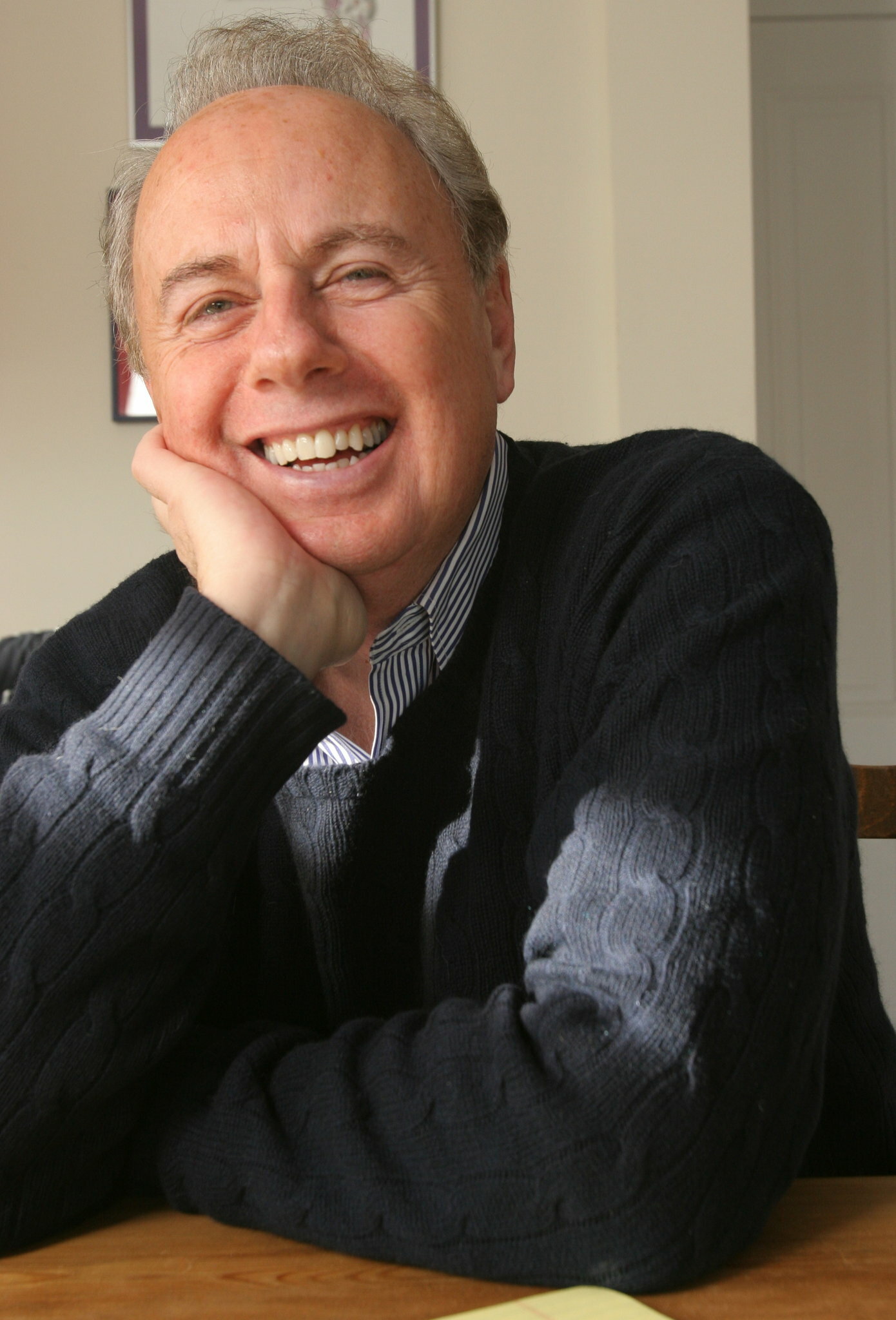 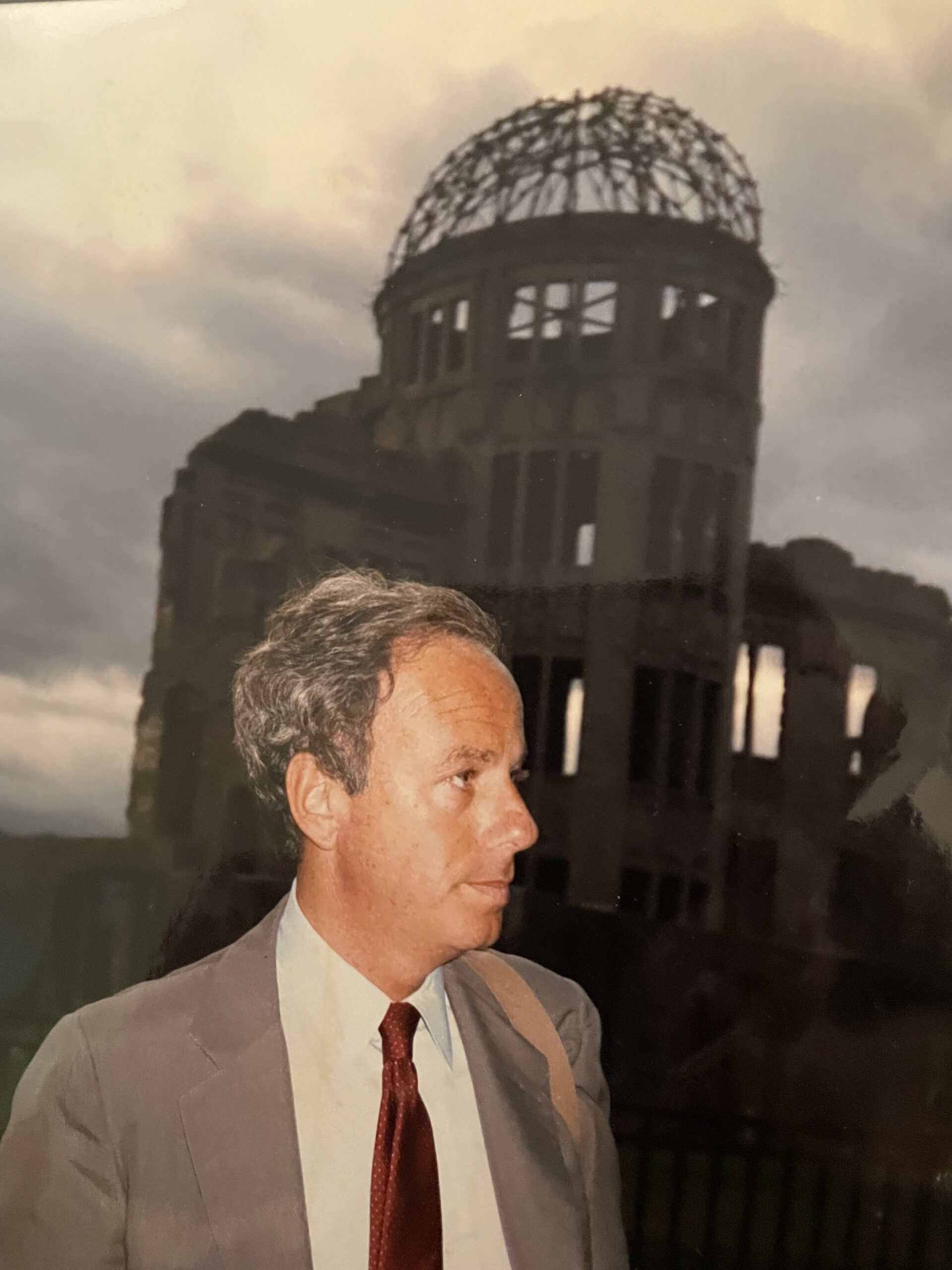 Roger Rosenblatt in Hiroshima in 1985. COURTESY THE AUTHOR 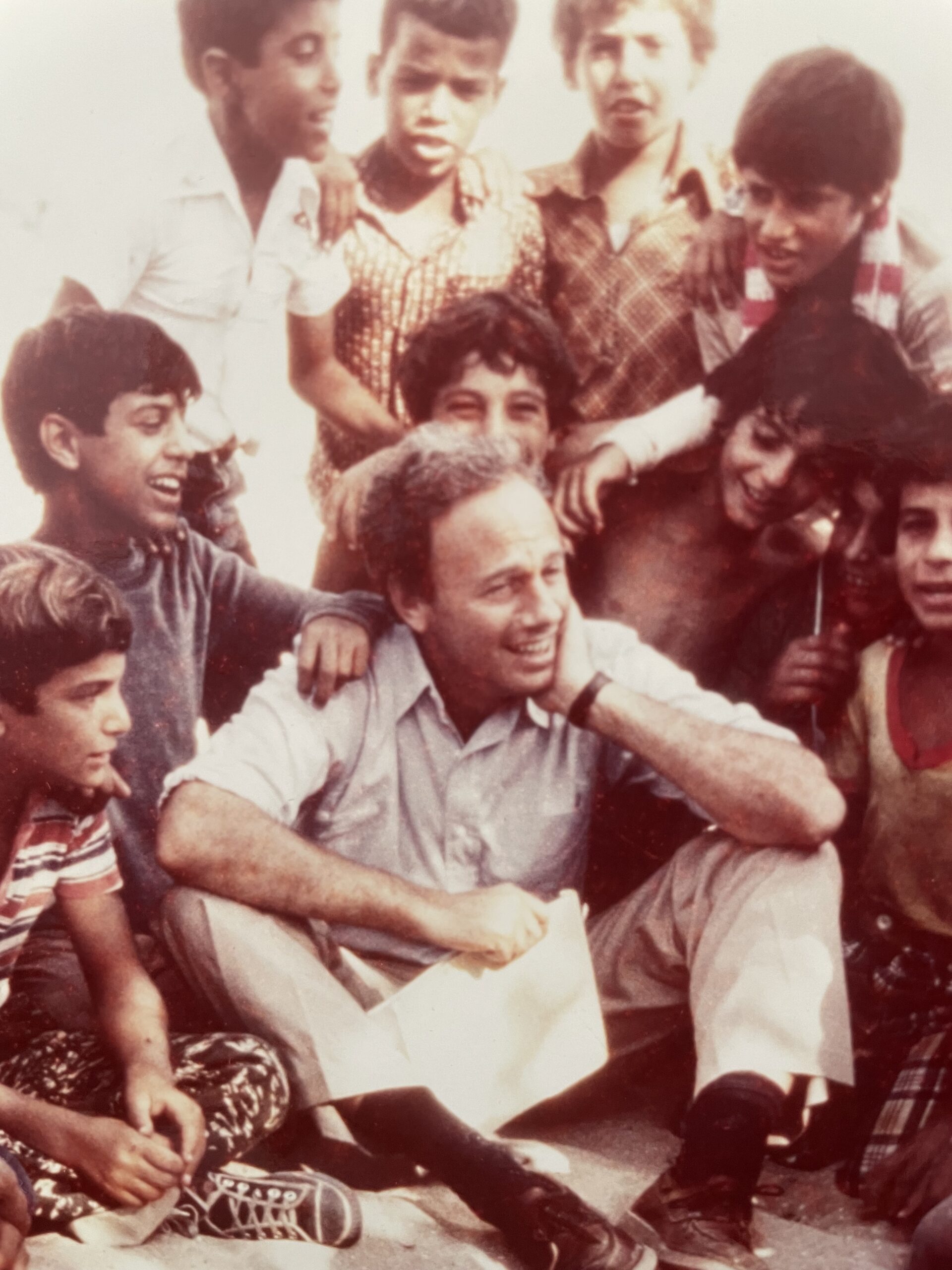 Roger Rosenblatt with Palestinian children in Beirut. COURTESY THE AUTHOR 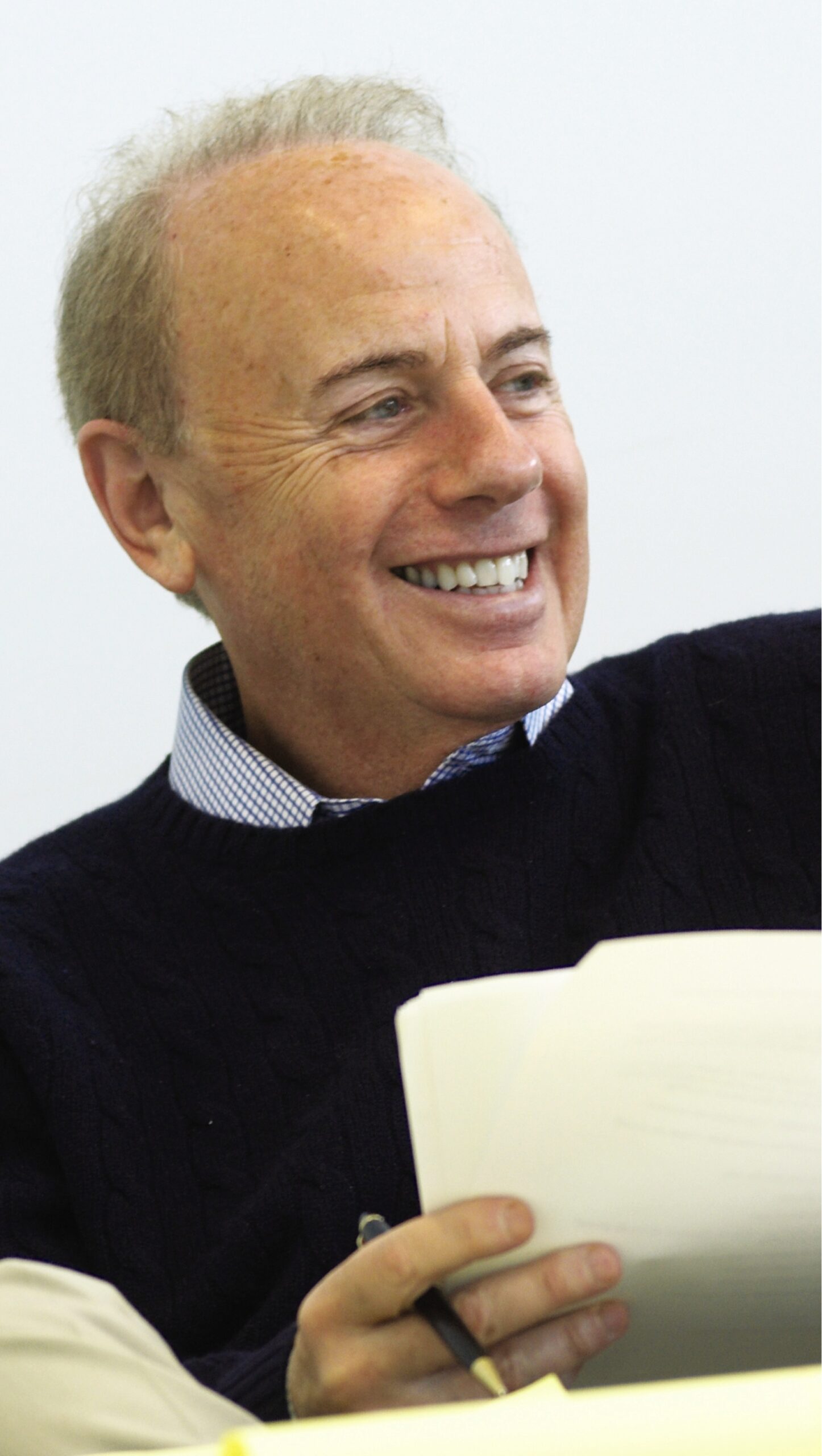 As a columnist, journalist, editor and author, Roger Rosenblatt has been toiling at the writing game for a long time — and over the years, he’s conquered his share of mediums. We’re talking newspapers (Washington Post), magazines (Time), television (MacNeil Lehrer NewsHour) and books — he’s written 20 to date, including “Making Toast,” a memoir about the sudden loss of his daughter, Amy, a pediatrician who died of an asymptomatic heart condition, in 2007 at the age of 38. His 21st book, “Cataract Blues,” is slated to publish this fall. Another milestone for Rosenblatt — the founding of the nationally acclaimed reading series, Write America. He’s even tried his hand at podcasting.

Along the way, Rosenblatt, who, since 2008, has been a Distinguished Professor of English and Writing at Stony Brook University’s Southampton campus, has also won quite a few accolades and awards for his work — including the Robert F. Kennedy Book Prize, a Peabody Award, an Emmy and two George Polk Awards. He was also a finalist for the National Book Critics Circle Award.

Yet despite his vast amount of experience and journalistic travels that took him around the globe, Rosenblatt will tell you that perhaps his proudest professional achievement, without at doubt, is having been involved in the creation of the MFA in writing program at the Southampton campus back in the 1990s when it was still part of Long Island University.

“One of the things that matters most to me is having invented and established — with [English professor] Robert Pattison — the MFA program in writing, first at Long Island University, and now at Stony Brook,” said Rosenblatt in a recent interview. “Usually, I made things with words. Now I made something about words. Very satisfying.”

Many a budding author has studied the craft of writing under his tutelage and Rosenblatt has inspired successive generations of wordsmiths. But on July 31, Rosenblatt, 81, officially put down his pen and closed his notebook — at least when it comes to teaching — and retired from Stony Brook Southampton.

Now, after living in Quogue for the last 24 years, Rosenblatt and his wife, Ginny, have packed up and left the East End and are happily ensconced in an apartment in Manhattan.

“We thought, we’re getting on in years, why not move back to the city and be near our doctors?” he said. “We’re at 92nd and York with a glorious view of the river.”

When asked about his decision to leave his position at Stony Brook Southampton, Rosenblatt explained, “About a year ago, I decided that this would be my last year. I loved teaching and the students. But after a while, I got tired of the sound of my voice, repeating things that may be new to them, but were not to me.”

While there are those mature adults among us who make an art of complaining that the work ethics of the young are not what they used to be, Rosenblatt has no such gripe with today’s population of students. In fact, he noted that over the years, he saw the quality of his students go up and up and up, despite the uncertainties that lay ahead in terms of carving out a career as a writer, much less a journalist.

“These are students with no life guaranteed to them — not like law school or medical school,” said Rosenblatt, who notes that his own journey as a writer began in adolescence.

“I wanted to write poems from the age of 12. At Harvard, I studied under Robert Lowell. It was a select group of people, but I wasn’t good enough to be a full time poet — or I didn’t have the patience,” said Rosenblatt who earned his Ph.D. from Harvard in the mid-1960s and was a Fulbright Scholar in Ireland. “One thing about poets is, they can wait 25 years before someone recognizes them. Journalism is the place for not waiting.”

Which is why journalism is exactly the field that Rosenblatt gravitated toward. He worked as literary editor and a columnist for The New Republic and in 1979, became an essayist for Time magazine. It was while working for Time that Rosenblatt wrote the most consequential piece of his journalistic career — a special report in the early 1980s titled “Children of War,” which focused on the hopes and fears of youngsters caught in various conflict zones throughout the world.

“I went to the editor at Time and I said, ‘I’m tired of essays. I want to write about children in war zones,’” Rosenblatt recalled. “He said, ‘Go ahead.’ So I went to five war zones. That wouldn’t happen today because there wouldn’t be a bureau wherever you went. I was in the catbird seat at the time and in a beautiful golden age of journalism.”

In “Children of War” Rosenblatt delved into the experiences of children in Northern Ireland, Lebanon, Israel, Cambodia and Vietnam.

“That story made a splash, and won the George Polk Award,” said Rosenblatt. “The Pulitzer people said ‘We don’t give Pulitzers to magazine.’ Of course, now they do. Then it became a book and a front page review in the New York Times Book Review.

“It was a lucky coincidence of inspiration and timing.”

After that piece, Rosenblatt continued to write about conflict zones and went to Rwanda for the New York Times magazine and Sudan for Vanity Fair.

“Every time I saw the world in distress, it was unforgiving,” said Rosenblatt who reported by using the long essay as his form. “It was a genre that hadn’t really existed. When I started to write more books, starting with ‘Making Toast’ after the death of our daughter, I saw I had a style that seemed to welcome poetry within the prose and reviewers felt that too. I was late getting where I was going.”

Rosenblatt’s foray into the world of television began in the early ‘80s with PBS’s MacNeil Lehrer NewsHour. He was invited by the show’s creators, Robert MacNeil and Jim Lehrer, to periodically record some of his Time essays which were then paired with imagery to illustrate the topic for the broadcast audience.

“We introduced the original essay and we produced something unique in television at the time,” said Rosenblatt. “When I turned 80 last year, some friends gave me a roast and Judy Woodruff was the funniest. She said ‘We put Roger on when we had dead air.’

“TV gave me a new understanding of the medium. The visual element of the essays was much more powerful than just the verbal,” added Rosenblatt. “Even when I thought I hit a home run, the visuals really carried the essay.”

In 2006, Rosenblatt left his positions at Time and the NewsHour and gave up journalism altogether to focus on teaching and a different kind of writing. It was during his time at Stony Brook Southampton that Rosenblatt really honed in on what it meant to be an author — and a prolific one at that.

“I always knew I wanted to write seriously, or even comically, so the books started to come,” said Rosenblatt who, with the fall publication of “Cataract Blues,” which he describes as an elegiac essay about mystery, memory and the color blue, will have published 11 books since joining Stony Brook University 16 years ago. Four of those books have been bestsellers.

His first novel, was “Lapham Rising,” which was a national bestseller published in 2006, while “Making Toast,” his memoir about the death of daughter Amy, was a New York Times bestseller. Published in 2010, it was based on an essay Rosenblatt had first written for the New Yorker magazine.

“Amy’s death reluctantly took me to a new place. [New Yorker editor] David Remnick asked me to write a piece on it,” he said. “I waited a year. I would do anything to not have written a book and have her alive.”

Rosenblatt’s second book on grief “Kayak Morning,” came out in 2012, and he notes that it has been helpful to thousands of people who, like he and his wife Ginny, have suffered unfathomable loss.

As he looks back at his time, first at Long Island University and then Stony Brook Southampton, Rosenblatt also recalls his role in creating the first summer writer’s conference on the campus.

“I called Frank McCourt and he said ‘yes,’ then E.L. Doctorow, Joyce Carol Oates, Margaret Atwood, Billy Collins, and we created a summer writer’s conference,” said Rosenblatt. “I would say this was around 2000. It was a helluva lot of fun. It was a great program and afterwards, we went and sang at local restaurants.”

Now, with his retirement, Rosenblatt is looking forward to the next chapter — staying pragmatic and reflective not only about where he’s been, but also about what’s next.

“I've held the appointment of Distinguished Professor of English and Writing at Stony Brook for 16 years,” he said. “I've been teaching for near 60 years, starting at Harvard when I was 22, and knew next to nothing.