The Kronos Quartet performs live with the documentary "A Thousand Thoughts." WALEED SHAH 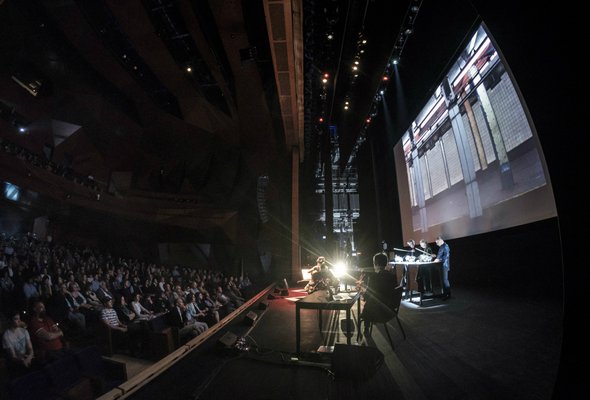 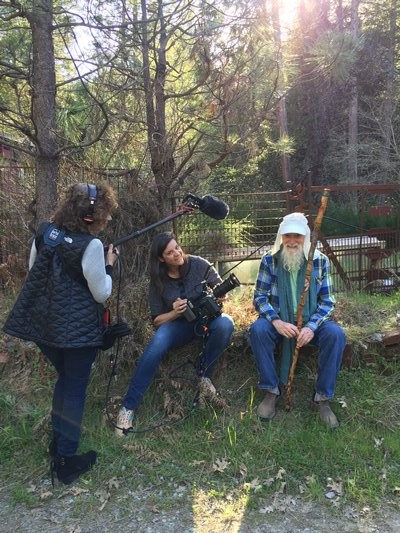 Behind the scenes of The Kronos Quartet filming "A Thousand Thoughts." COURTESY OF THE ARTISTS

In 1973, 23-year-old violinist David Harrington was living in Seattle and wondering about the future of classical music.

At the time, war was raging in Vietnam, while, at home, turbulence and unrest were shaping a whole generation. The contemporary world was complicated—and it wasn’t reflected in the musical compositions he was encountering.

Then he heard a piece of music on the radio that changed his life: George Crumb’s “Black Angels.”

“Very few people were writing for string quartets at that point,” Mr. Harrington recalled in a recent phone interview. “It was Pierre Boulez who said that the string quartet was dead—and, suddenly, I’m hearing ‘Black Angels’ on the radio. It not only convinced me that the statement that this art form was dead was totally wrong, but all of a sudden I heard my song. It brought so many things together for me.”

Just as cutting-edge musicians like Jimi Hendrix were redefining what was possible on electric guitar in those days, so, too, was “Black Angels,” which was the first time Mr. Harrington had heard an electric string quartet. The amazing variety of sounds in the composition presented a marked contrast to the Schubert, Beethoven and Hayden he had grown up with.

“I found out who published George Crumb’s ‘Black Angels’ and arranged for them to send me the score,” he said. “I got a look at it and instantly knew that this was not the kind of thing any group I had been in before could play. I knew I needed to get a group together and we needed to rehearse every day to work up to having the chops to play that.

“I also found out that the score had been written in a time of war. As a young American who had faced the draft board, suddenly, there was music that felt like the right music to play,” Mr. Harrington recalled. “I also knew the string quartet wasn’t dead, because my close friend Ken Benshoof had already decided he was going to write a piece for a group I was going to form.”

The group that Mr. Harrington formed, the Kronos Quartet, is still going strong and, after more than 45 years, is still redefining what’s possible in terms of the string quartet. Based in San Francisco, members have come and gone over the years, but the world-renowned and wildly successful players continue to perform an amazing array of compositions.

Among its repertoire is, of course, “Black Angels,” but also music by Jimi Hendrix, and several hundred works that have been written specifically for the group—including several by Mr. Benshoof.

The Kronos Quartet will make its East End debut on Friday, June 21, at East Hampton’s Guild Hall with “A Thousand Thoughts,” a unique “live documentary” by Academy Award-nominated director Sam Green, which is presented in partnership with the Hamptons International Film Festival. The documentary traces the group’s multi-decade career as Mr. Green narrates the piece onstage and the Kronos Quartet performs the score live.

It’s a unique presentation for a unique string quartet that has been pushing the boundaries of what’s possible for close to a half century. But they’re not done yet, and Mr. Harrington notes that the group is ever evolving.

“Kronos started in Seattle with three fellows I knew, and it took all these years to get where we are today,” he said. “One thing a concert can do is celebrate life and humanity. Very few other human activities can do that, and, for me, it’s a continual inspiration. The idea that we get to celebrate the inner life and inner sounds of creative people from every corner of the globe year after year is something I jump out of bed for every day.”

Many of the pivotal moments in the group’s career are recounted in “A Thousand Thoughts,” which offers viewers and listeners a look back at the quartet’s long history. Mr. Harrington explained that the film grew out of a short, five-minute piece that Mr. Green made for the Kronos Quartet on the occasion of its 40th anniversary.

“We really liked what Sam did. It said a lot about our work. When he proposed the idea of a longer piece, I said, ‘Is this a film, a concert, a talk or a lecture?’” Mr. Harrington recalled. “He said, ‘It’s all of these things.’ That’s when I said, ‘This sounds perfect for us.’ So we gave him total access to the archive we had, and everyone was interviewed.

“At the same time, it’s 85 minutes, and you can’t tell the story of thousands of concerts and pieces written for the group and collaborations from other cultures, different instruments, backgrounds and religions in that time. You can’t tell the entire story—but you can tell part of it.”

If there’s been a key through line in the story of the Kronos Quartet, it has been the group’s mission to make inspired music that serves as an antidote to the world’s woes and the suffering faced by millions on a daily basis. A noble pursuit, indeed.

“It’s interesting, I’m hearing my younger voice on the film from 35 years ago saying the same thing I’m saying now. If anyone wants to accuse me of anything, they can accuse me of being consistent,” said Mr. Harrington. “The desire to create counterbalance to morass and suffering through music is consistent. It’s fair to say, I’ve tried and desired every day of my life to create music that could prevent suffering.”

Whether that music is Billie Holiday singing “Strange Fruit,” or a piece by Beethoven, the ability of music to effect positive change is a powerful motivation for Mr. Harrington.

“Anything that grabs you as profoundly, amazingly and humanly beautiful is a response to violence, war, deprivation and small thinking,” he said. “As a 23-year-old American, ‘Black Angels’ spoke to me in a way no other piece had spoken to me before. It not only created a response for me personally about that terrible war and our country, which was disintegrating before our eyes, but when you look and listen into the history of the string quartet as an art form, ‘Black Angels’ simply towers above other pieces from 1973 in any musical art form.

“As the dust has settled, that piece continues to be an amazing work of art.”

And after more than 45 years, the Kronos Quartet continues to make music that is capable of having a profound effect on its audience.