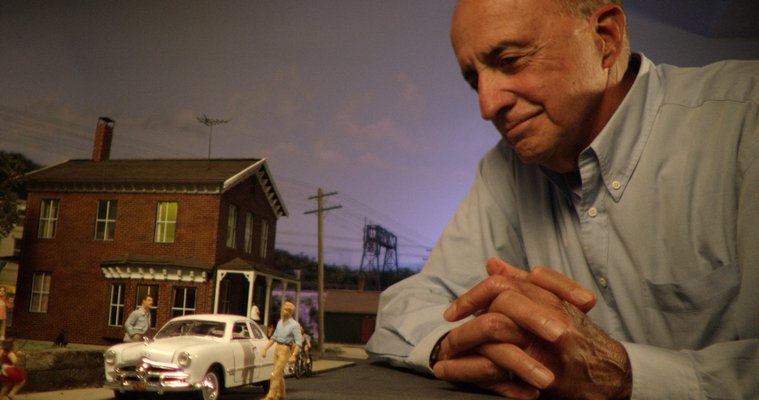 “I Love Lucy” plays on screens in a TV repair shop. “The High and the Mighty” starring John Wayne is being shown at a drive-in movie theater. A Lackawanna Railroad train is heard passing by.

It sure seems like the 1950s. But this scene is inside the basement of the East Hampton home of investor John H. Scully and his wife, film producer Regina K. Scully, and everything is at 1:32 scale.

Mr. Scully’s lifelong love of trains and his museum-quality model train set, which spans the 3,000-square-foot basement and includes various scenes re-created down to the smallest detail, are the subject of “Still Plays With Trains,” a short documentary that will have its world premiere at the 26th annual Hamptons International Film Festival happening over Columbus Day weekend.

For both of them, the subject matter of “Still Plays With Trains” is a departure from their typical documentaries, which concern social justice.

“We both specialize in documentaries on sometimes very difficult subjects,” Mr. Kauffman said. “They can be not the most uplifting subjects in the world—but they’re very important. Last year we were talking and thought, ‘Wouldn’t it be nice to do a film that’s more lighthearted and joyful?’”

“My films are not for the fainthearted,” Ms. Scully added during a separate interview. “We go after some of the toughest social justice issues of our time, so for me to take a pause to do this movie has been such an incredible experience.”

She said the film is well-timed, as audiences are starving for sweetness, kindness, civility and simple pleasures.

“It’s such a sweet, sweet film. It’s very reminiscent of the one that’s making headlines these days, ‘Won’t You Be My Neighbor?’ the story about Fred Rogers,” she said, noting she is among the executive producers of that film. “It’s of that ilk, that sweet nostalgic feel and going back to gentler times.”

The genesis of the model train display happened 15 years ago when the Scullys found land in East Hampton to build their dream home—with the basement set aside from day one for the trains.

“His whole life he’s had smaller models,” Ms. Scully said of her husband. “He’s loved trains since he was 3 years old.”

She said this set is state-of-the-art and historically accurate, re-enacting her husband’s childhood in New Jersey in the 1950s. Actual tickets from the Lackawanna Railroad were found and replicated to scale. Even the menus in the dining car are replicas of the actual menus that were used at the time, right down to the prices.

The models are a history lesson about railroads in America, from coal-fired steam engines to diesel, Ms. Scully said.

The Scullys have opened it up to families to view, and children are given the chance to control the trains.

“We’ve had everyone from Paul McCartney’s grandchildren to the local seafood company’s kids,” Ms. Scully said.

She noted that her husband’s replicas are realistic enough to be used in movies and could save filmmakers a lot of money. “His dream visitor is Steven Spielberg and he’s waiting to give him a private show,” she said.

The film was intended to be for the benefit of their nieces and nephews and grandchildren, according to Ms. Scully. But its reach has already grown—film festival programmers have been loving it.

“We were all set to just show this in our living room for friends and family,” she said. “Then one of the programmers called and said, ‘You’ve got to send this everywhere.’”

The Hamptons International Film Festival was the first to accept it and will be the first to screen it. In fact, they wrapped up editing the film just in the nick of time to submit it for the festival’s deadline.

“Everyone who’s watching it can’t help but think: What is it in my life—whether from childhood or not—that brings me to that happy place?” Ms. Scully said.

Considering the overwhelmingly positive reception, a series of “Still Plays With” is in the works, all about people with lifelong passions. Filming is underway and subjects include Lego, cars and dirt.

“Lifelong passions are so interesting and they’re so joyful,” Ms. Scully said.

Unlike the Scullys, Mr. Kauffman hadn’t spent time in East Hampton before. However, he is sticking around. “I am actually making another film based in East Hampton right now,” he said. Titled “Waterproof,” it is a documentary about the East Hampton lifeguard community. Additionally, his first narrative short film, “Boy Boy Girl Girl” is on the festival circuit now.

“Still Plays With Trains” will be screened preceding “Bathtubs Over Broadway” on Sunday, October 7, at 2:15 p.m. at Bay Street Theater in Sag Harbor and on Monday, October 8, at noon at the Southampton Arts Center on Jobs Lane in Southampton Village.