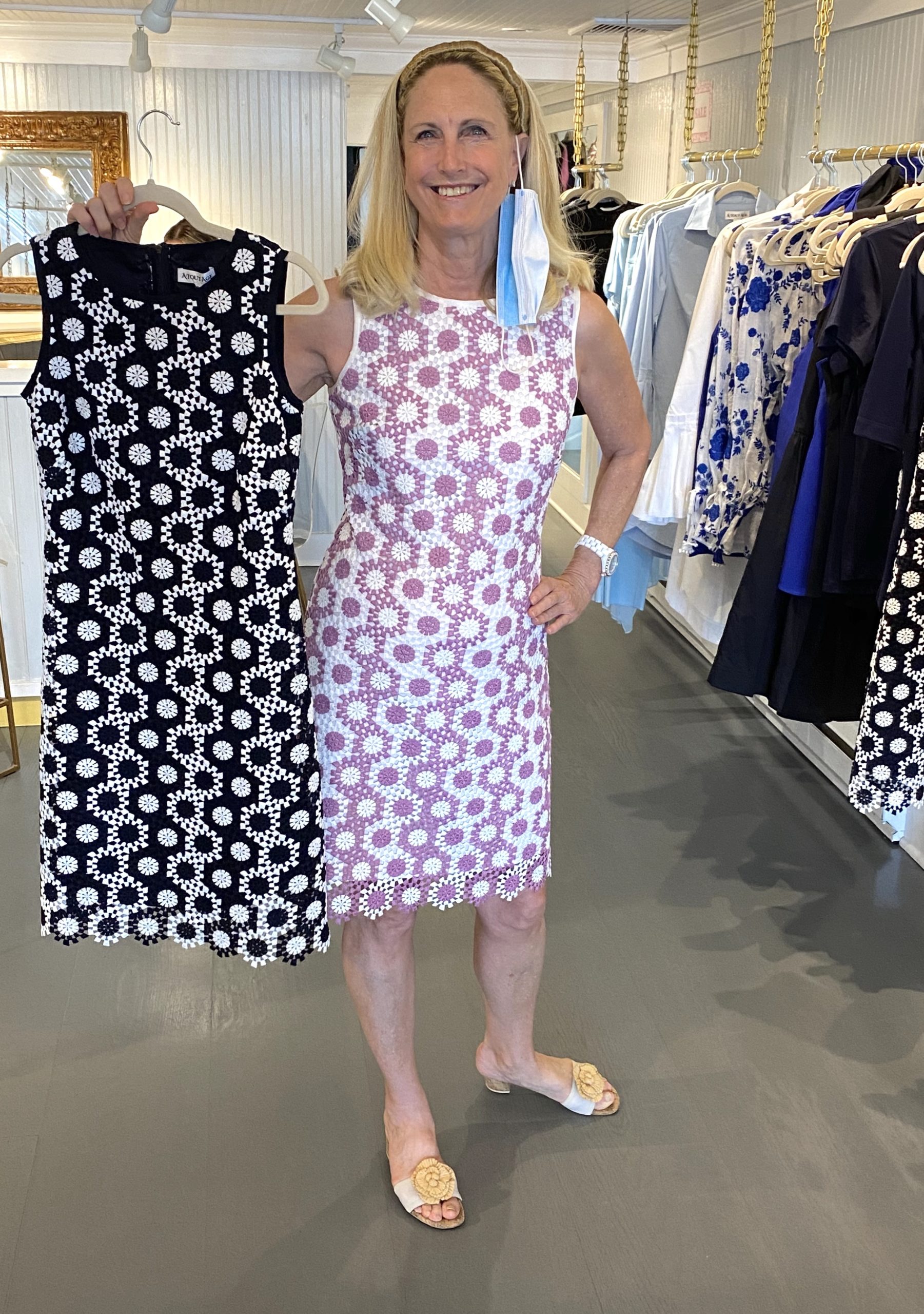 Fashion veteran Denise Johnston is her own best model, showing off her signature guipure lace dress. It sells for $395. 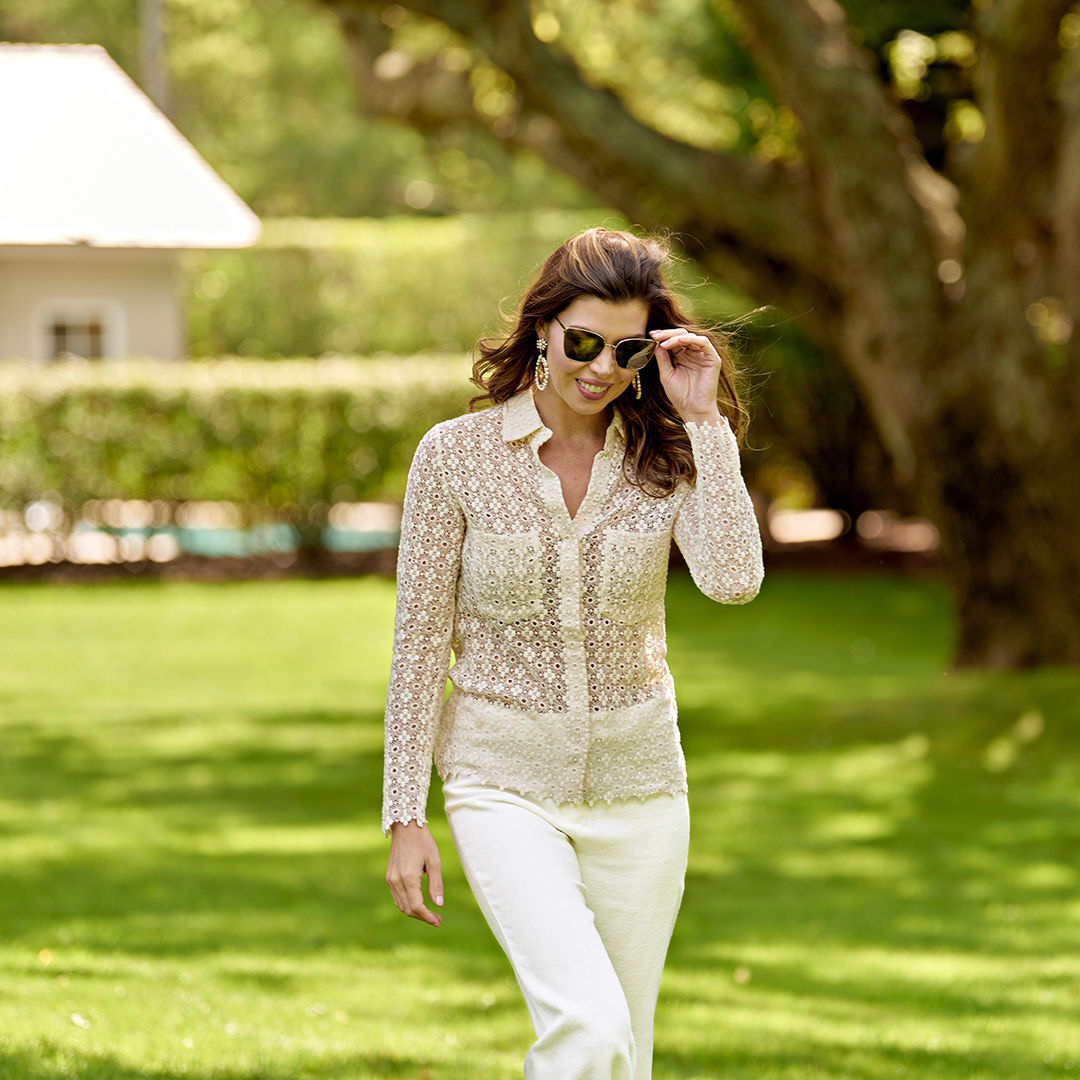 A lace shirt from Á-Tout-Áge. 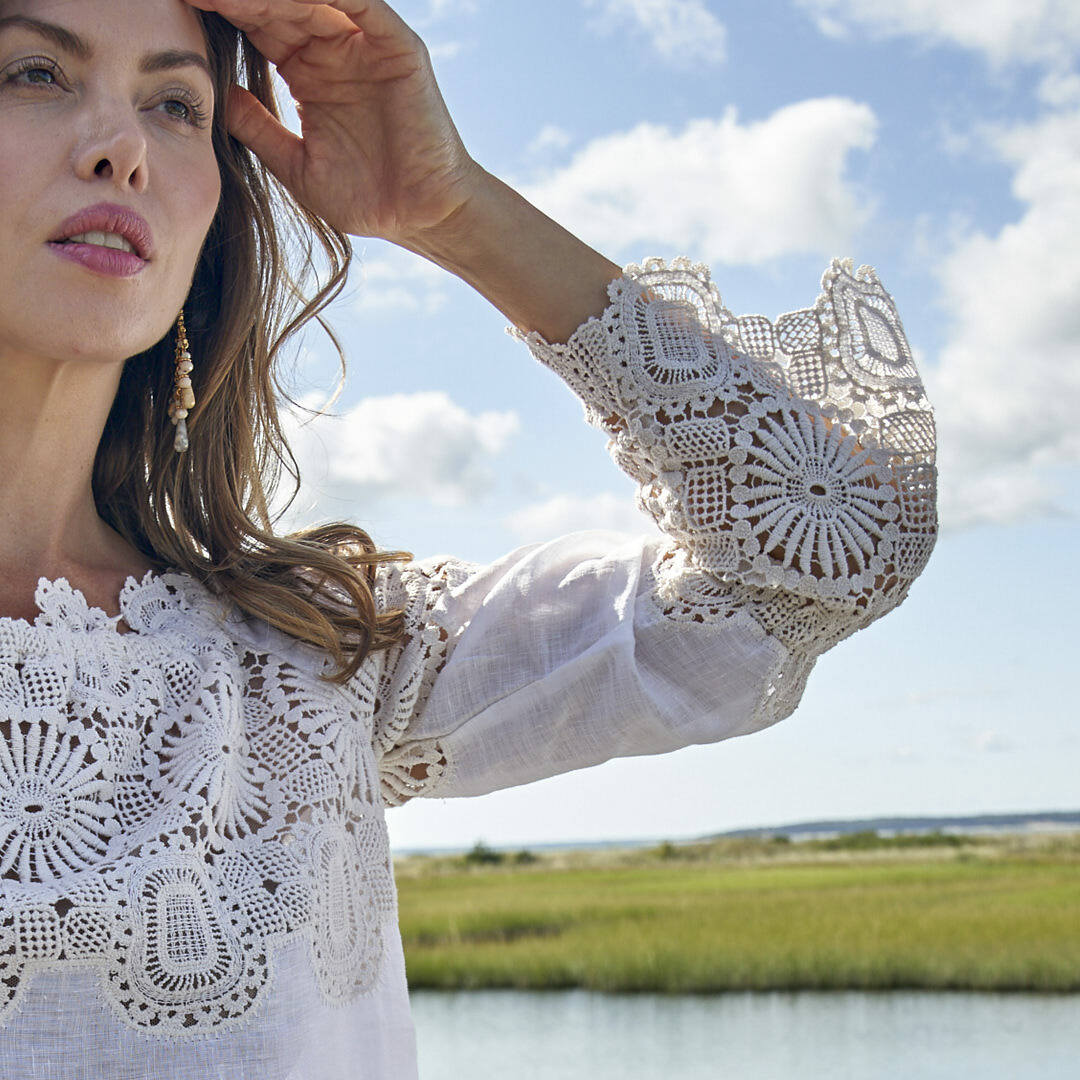 It’s not a new story: a woman with unique personal style comes to the realization that there is a void in the fashion marketplace, one that can be fulfilled by either launching her own brand or opening her own retail stores. To say that this is a high risk undertaking would be the understatement of the century, as few have succeeded.

In the 1960s, the fashion world took notice of a young Lilly Pulitzer, who designed simple little dresses in loud prints for herself to wear while selling fresh-squeezed orange juice in Palm Beach, Florida. She made a few extras and offered them up for sale to her friends and customers, who were charmed by the free-spirited ease of the garments. It helped that those friends included a boarding school buddy named Jackie Kennedy; and a sensation was born.

Lilly Pulitzer shops appeared in exclusive resort towns from coast to coast, along with the year round suburbs that fed those resorts. One could find Lilly shops not only in places like Palm Beach or Southampton, for that matter (it was on Job’s Lane) — they were also in tony towns with names like Locust Valley and Lake Forest — wherever there was an established social order around private clubs. The rest of the story is well-known: Lilly sold the label to a group of private investors in the 1990s. They took the company mainstream and ended up selling it in 2010 to Oxford Industries, the publicly traded apparel behemoth that also owns Tommy Bahama.

In a similar manner, nearly 45 years later, a petite, soft-spoken young woman named Tory Burch took the same leap of faith, albeit with a $12 million investment from her then husband, Chris Burch, and other outside investors. Ironically, the three private investors that purchased the Lilly Pulitzer brand back in the early 1990s worked for Chris and his brother Bob’s apparel company, Eagle’s Eye, whose claim to fame was the women’s white turtleneck shirt imprinted with “couldn’t be cuter” motifs such as little frogs, strawberries and hearts. Tory’s brand, however, would be significantly more sophisticated, relying heavily on her own mother’s individual style, Tory’s own preppy-bohemian point of view, a fully functional e-commerce platform and, eventually, hundreds of dramatically designed boutiques scattered throughout the world. It would not be an exaggeration to say that she singlehandedly brought the Moroccan-inspired tunic and the ornamented ballerina flat shoe into millions of women’s wardrobes. Most reliable financial reports agree that at its peak, Tory Burch LLC (which is frequently compared to other deluxe megabrands such as Michael Kors, Burberry and Prada) enjoyed an annual revenue of approximately $1.5 billion. Dun & Bradstreet currently lists a number that is about a quarter of that. Chatter about a potential IPO has consistently been refuted by Tory herself, although rumors of an acquisition similar to the purchase of the Tommy Hilfiger and Calvin Klein brands by PVH Corp. remain. Regardless, global pandemic acknowledged, it’s a big, albeit challenged, business.

So why in the world would fashion industry veteran Denise Johnston pick a time like this to launch her own brand, À-Tout-Àge, when American clothing sales have fallen by 79 percent, stalwart retailers like Barneys and Lord & Taylor have vaporized, and a recent New York Times Magazine feature discussed in depth the chilling prospect of “Sweatpants Forever: How the Fashion Industry Collapsed?”

“I felt that there was a niche that I could successfully fill,” says the woman who has held a string of leadership roles at Neiman-Marcus, Macys, Liz Claiborne and GAP.

Even in today’s COVID-fraught environment, she remains confident and upbeat. Through a combination of walk-in customers both in her new pop up boutique at 60 Jobs Lane in Southampton and at Chu Chu Loo in Naples, Florida, a comprehensive trunk show schedule and an attractive website, Johnston has surprised even herself by maintaining momentum and meeting sales projections. It helps that she is extremely competent in areas that typically allude most creative types: the numbers. Decades of market analysis, trend-spotting and managing unwieldly businesses have served her well. Being her own target customer also helps.

“Women of all ages are aware of how their bodies change over time. Small touches in coverage and fit can make all the difference,” she says. “I design things that work for women like me — and once a woman finds something that works, I have found that she will buy it in several colors in addition to sister pieces built on the same foundation.”

In Denise Johnston’s vision, those pieces are expressed as relatable but uncommon silhouettes — easy sheath dresses, pretty tops, a simple but perfect trouser — all rendered in exquisite fabrics, such as a substantial cotton with a touch of stretch, silk and cotton voile and guipure lace, all with either unexpected detailing, embroidery or elegant trims. The clothing is also beautifully constructed, looking far more European than American. Worldly would be a proper descriptive, along with approachability, with prices ranging from $98 to $595.

“I’m encouraged that while we are all buying less, I’ve found success by presenting my customers with pieces that are unique, so that one purchase feels important — even if it’s only for a Zoom meeting or safe home entertaining. When we wear great clothes, others notice us, but more importantly, we feel better about ourselves.”

It’s unlikely that anyone has ever felt better about themselves by wearing a pair of sweatpants. Denise Johnston and her brand, À-Tout-Àge, are banking on the power of self-esteem and optimism over anxiety and despair. It’s not a bad idea.