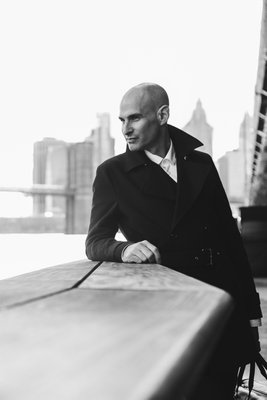 It was 2003 when Walker Vreeland was handed a VHS tape and three musical scores. He was to learn three plays in just one week and then perform those plays on a Norwegian Cruise Line trip that sailed from New York to Bermuda. At the time, he didn’t know that this moment would lead to a mental breakdown—and help set the stage for his one-man play, “From Ship to Shape.”

Four years later, Mr. Vreeland, who by then was an East End radio personality at 102.5 WBAZ-FM, found journal entries from 2003, the year he ended up in the psychiatric ward at the Mood Disorders Clinic at Johns Hopkins Bayview Medical Center in Baltimore, Maryland. The journal entries tell a three-part story of how a job at a cruise line, an admission to the psychiatric ward and a period of healing all are connected.

“I wish I wouldn’t have had to suffer so much,” Mr. Vreeland said during a recent interview at Starbucks in Bridgehampton. “But now, because we can’t change the past, I’m happy. I’m happy that the breakdown happened the way it did, because it made a great story.”

Eventually, those journal entries would become “From Ship to Shape,” his comedic yet dramatic one-man show, which he has performed along the East Coast, from New York to Florida. Mr. Vreeland developed the show with Bay Street Theater’s artistic director, Scott Schwartz, and “From Ship to Shape” made its world premiere in Sag Harbor as part of the theater’s New Works Festival in 2016.

“It begins with a younger version of myself,” Mr. Vreeland, now 40, explained. “Just out of college. I had graduated from NYU, their acting program. I was doing mostly musical theatre, and I was very, very green. Very naive.”

A young Mr. Vreeland had accepted a job as a lead singer on the cruise ship but was in no way prepared for the chaos that lay in wait. Already in an “unstable place” mentally, taking a step onto that ship would change Mr. Vreeland’s life as he knew it.

“I had a lot to do in a short amount of time,” he said. “I had three shows to learn in one week, and there I was, sitting through hour five of safety class, being lectured about how to put out a fire. And I’m thinking to myself, ‘I should be given a pass for this. If there’s a fire, I’m not going to be the one to put it out.’ Like, look at me. I’m show business. I do not put out fires—I make them.”

What could already be considered a daunting task was intensified when Mr. Vreeland found out there was no rehearsal schedule. His only director would be those three musical scores and the VHS tape.

But Mr. Vreeland was determined. Though the lead actor he was replacing in the show had no interest in teaching him the role, and fellow cast members were not positive about being there, he made the best of it, despite the fact that feelings of loneliness were growing with each day.

“I did the best I could with the tools I had,” Mr. Vreeland said.

“And then I found out that they expected me to dance,” Mr. Vreeland said. “Not just dance, not just like step, touch, step ball-change. No—dance. To have lead-dancer skills.”

Not wanting to see himself fail, he decided to quit the cruise job. But leaving did not provide the sense of relief that Mr. Vreeland had been looking for.

“I’ve been in this business all my life,” he said. “I’ve been an actor all my life, I’ve been a singer all my life. It was the one area of my life that always felt like a sure thing. The only thing I could depend on.”

The next chapter of his life was set in New York City, where he began to experience periods of “feeling on top of the world,” followed by periods of crashing and incapacitation while working as a reservationist at a restaurant in Chelsea. He was still upping his dose of antidepressants.

At the peak of his crisis he was experiencing mood swings from one extreme to another. One day he’d be incapacitated by depression, the next, running through the streets of New York hysterically crying.

From there, the next period of Mr. Vreeland’s life would be a time of healing and reconstructing his mental health, something that he has struggled with since he was a child. Though he does not remember his 2003 breakdown clearly, he has the journal entries to document the events that took place.

“The third act recounts the hospitalization and how I put my life back together,” Mr. Vreeland said. “And it’s still kind of a mystery of how I got better—I don’t know. Every single time I perform [the show], it’s an exploration of what did happen to me.”

That theatrical exploration took eight years to develop, along with years of treatment that took him to a place where he could finally laugh at what he experienced as a 23-year-old. But he didn’t do it alone. Mr. Schwartz helped Mr. Vreeland develop the script, while director Milton Justice brought “From Ship to Shape” to the stage, allowing Mr. Vreeland to take his one-man show from Bay Street to Off-Broadway and, in 2018, to the SaraSolo Festival in Sarasota, Florida.

Now, with the show in its final form, he looks forward to bringing it back to the community where he created it.

“We’ve come so far in terms of the stigmatization of mental illness, but we still have a long way to go,” Mr. Vreeland said. “Especially in places like this, where there are many images of perfection. It’s beautiful, it’s sort of considered paradise. There’s so much wealth and success and status out here. It’s like social media where you see a lot of images of perfection, but it’s not really perfection.

“People are hungry for it. They need to know they’re not alone.”

Mr. Vreeland will be performing “From Ship to Shape” at Bay Street Theatre on Monday, June 10 at 7 p.m. Tickets are available online at Baystreet.org or the Bay Street box office and are priced from $35 to $45. For more information call 631-725-9500.