Carla's Kitchen Branches Out Into Pies And Finds Success - 27 East

Carla’s Kitchen Branches Out Into Pies And Finds Success 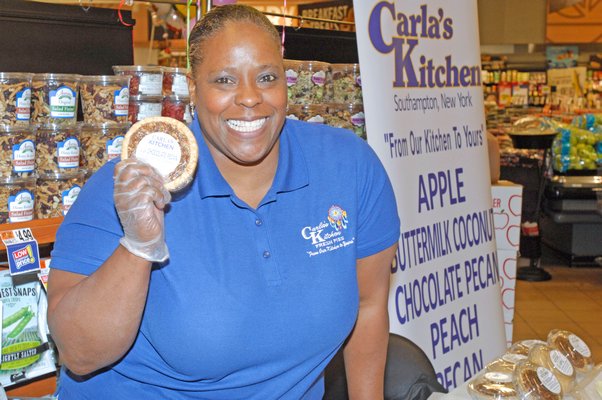 A squatter was living in a Hampton 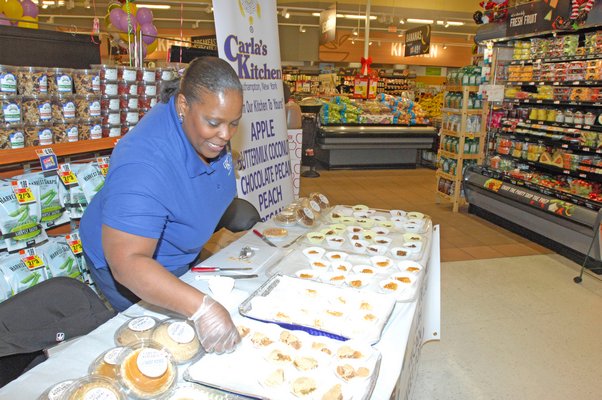 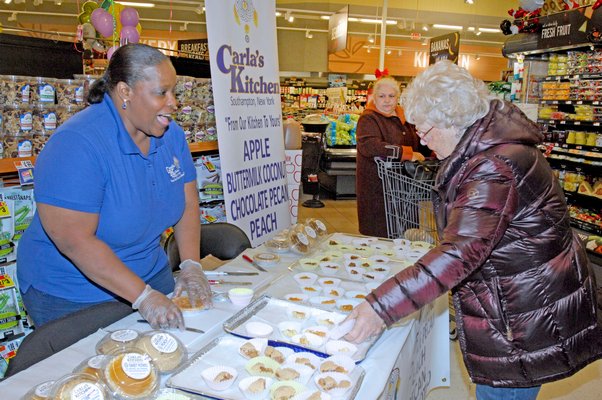 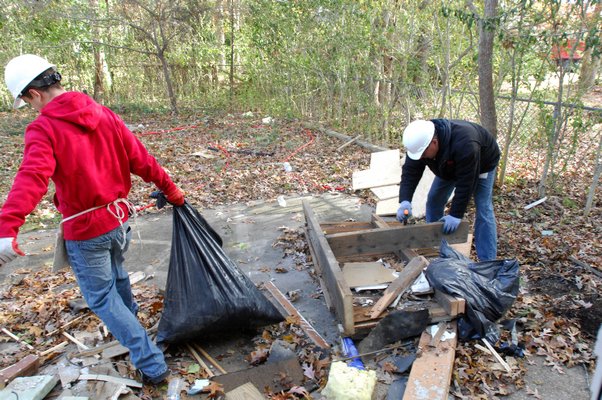 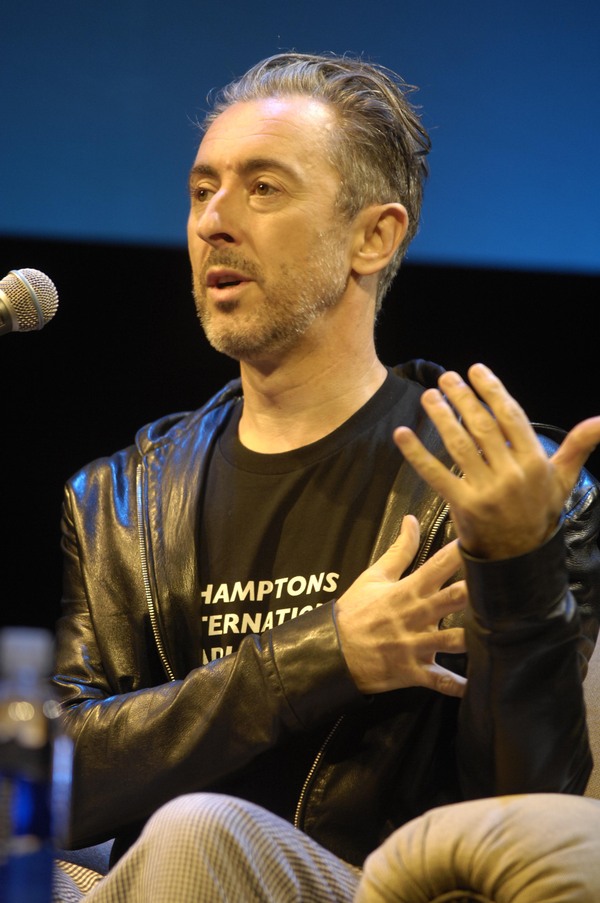 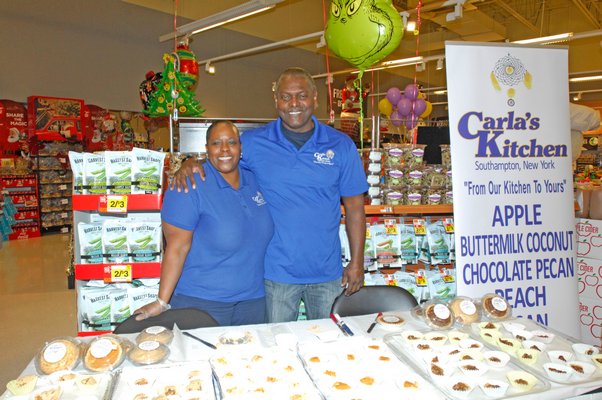 Carla James and Antonio during the "roll out" of her pies at the Riverhead Stop and Shop on Friday afternoon. DANA SHAW 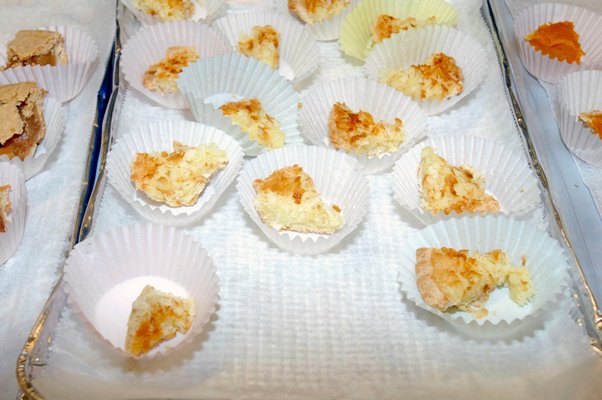 Samples of the pies. DANA SHAW 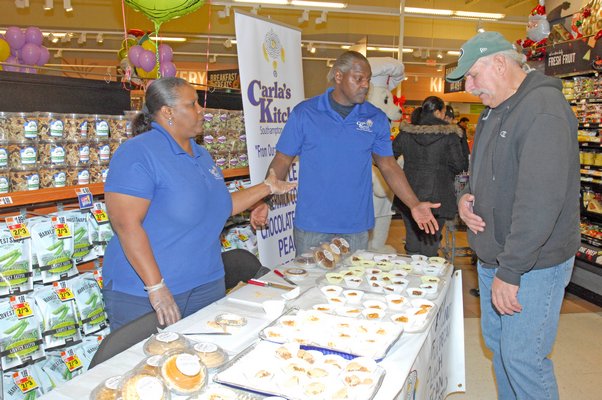 “It has always been a passion of mine to cook,” Carla James, founder of Carla’s Kitchen, said.

Ms. James grew up on the Shinnecock Reservation, where her father had been born and raised. Eight years ago on the reservation, she and her husband, Tony James, opened Carla’s Kitchen and Smokehouse, the couple’s first foray into the culinary world. “That’s how we started out,” she said. “As a mom-and-pop shop at first.”

Carla and Tony have been a pair for 12 years now and have perfected the art of living and working together. “We still like each other. We support each other,” Ms. James said. “We are truly team players. We have always been.” It’s that team mindset that drives this family operation, which has recently exploded on Long Island.

The first iteration of Carla’s Kitchen was essentially a lunch counter, where patrons could sit at a cooktop manned by Ms. James. She cooked in front of her diners, offering up everything from French toast and scrambled eggs with cheese to hamburgers and six different varieties of chicken wings. Ice cream and sandwich fillings—tuna fish, blue crab salad, egg salad—were all homemade, showcasing as many local ingredients as possible.

Over time, the Jameses’ business grew. An expanded space featured booths, and diners could enjoy breakfast, lunch and dinner. Two years ago, Ms. James and her husband decided to reinvent their space once more. With the idea of focusing on pies, they expanded the space as a commissary, where they now produce a series of 4- and 8-inch pies. The kitchen itself, with seating available outside at umbrella-shaded picnic tables, is open until September, but the pies are around all year long. These days, a commercial bakery space yields 400 to 500 pies a week, delivered around Long Island on Thursdays. The 4-inch pie is their trademark size. “We find they move faster,” Mr. James said. “People don’t feel as guilty.”

Carla’s Kitchen pies come in seven flavors: pumpkin, sweet potato, buttermilk coconut, chocolate pecan, apple, pecan and peach. A flaky, flavorful crust comes from a blend of shortening and butter, and many of the fillings—the buttermilk coconut, for instance—are custard-based. A 4-inch pie serves two, optimistically, although it can easily stand in for one person’s hearty lunch. Their pie mantra (“They’re bite-sized; they’re the right size; they’re Carla’s pies”) is a testament to that fact. Although 8-inch pies are available—especially at the holidays—the Jameses believe that the 4-inch pies are representative of their craft.

Schmidt’s Market in Southampton Village became the first to carry the pies. “They tasted our product. They believed in us. For the past two years, our pies have been in there,” Ms. James said. Stop & Shop now sells the 4-inch pies in seven of their locations, including East Hampton and Southampton. An eighth location—Shirley—will soon be carrying them as well. Other business on the East End that carry the pies include Water Mill Deli, the Water Mill Shell gas station, Goldberg’s Famous Bagels and Fresco Pizza Deli.

“We never stop thinking about how to make the product better,” Mr. James said. With this ethos in mind, the pair has their eyes on possible expansion. In other words: the pie is not the limit. In the future, the Jameses hope to include Carla’s chowders—chicken-corn, New England clam, spicy blue crab—to their oeuvre. “I love to cook,” Carla said. “My satisfaction is that I like cooking and making people happy. The baking is [only] part of my cooking.” Don’t be surprised if Carla’s chowders—which have enjoyed immense popularity at the yearly Shinnecock Pow Wow held on Labor Day Weekend—make an appearance at a store near you sometime soon.

But—for now, at least—it is the pies that drive this flourishing business. So, which fresh, never-frozen pies are the Jameses’ favorites? While Mr. James remained partial to the sweet potato, with its custardy filling teeming with nutmeg and allspice, Ms. James had a more egalitarian view: “All of them. I’m so weak. I’m not going to lie.”