On The Menu: Hampton Bays 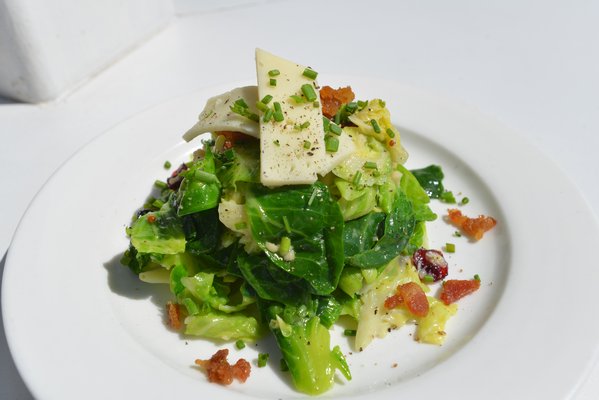 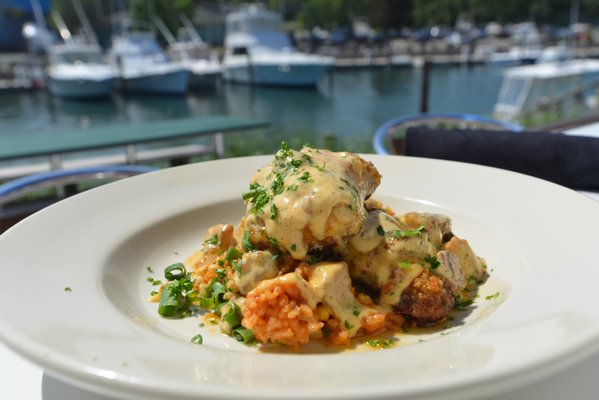 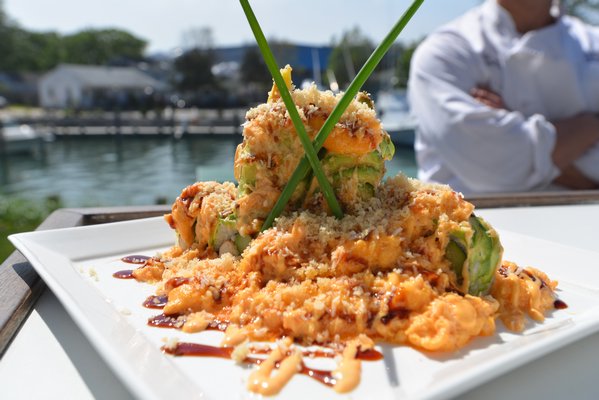 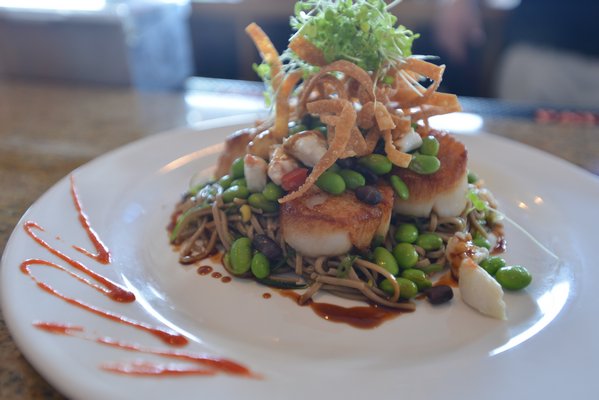 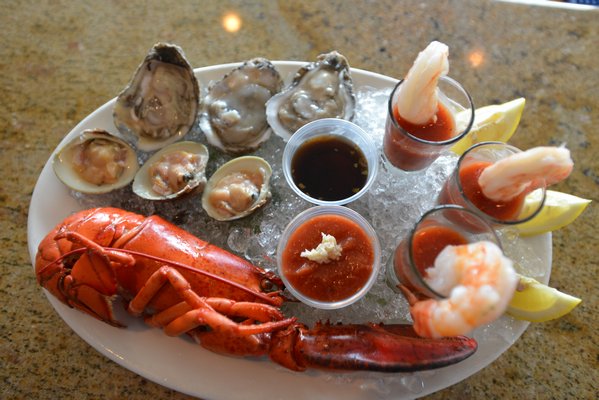 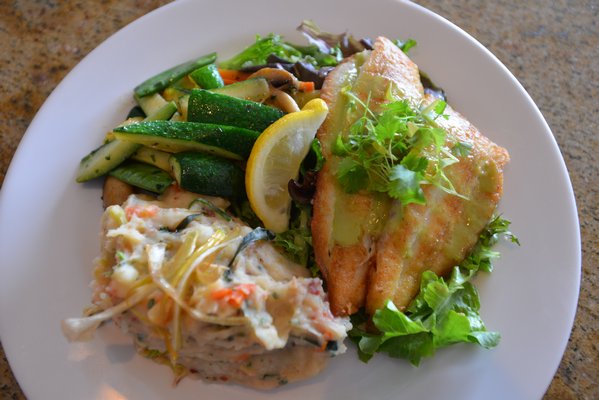 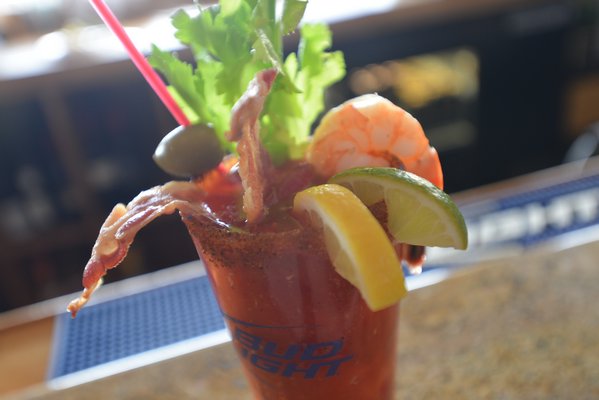 It’s June, summer is almost here, and that marks the return of the On The Menu restaurant column here in the Press. To start the 2013 season, Arts & Living visited the hamlet of Hampton Bays for water views, fresh seafood and cold cocktails.

Before coming to the eatery, the chef owned a restaurant in Patchogue that was destroyed during Hurricane Sandy last year. At the same time Mr. Heaney’s high school friend and Shuckers owner, Pat McCormack, was looking for a chef. The two joined forces, and the restaurant enters its third season with a new menu.

The Coconut Shrimp Tacos bring a southwestern twist to a traditional shrimp preparation. Served with apricot Dijon and cucumber slaw, they are a crunchy, refreshing option, especially when complemented by a margarita at the bar.

The Shucker’s logo is a cartoon lobster, which can be seen temporarily tattooed all over Mr. McCormack’s kids as they run around the deck, dancing to live music. So it’s no surprise that the Stuffed Lobster is the signature dish.

A steamed 1¼-pound lobster is topped with a golden-brown shrimp, crab and scallop stuffing. The lobster dish, which is more like a platter, also comes with two clams, mussels and corn on the cob.

The Scallop Po’ Boy makes unique use of a popular local ingredient: fresh sea scallops. The caramelized scallops are served on a baguette, over chipotle slaw with jalapeño relish.

“Contrasting flavors, sweet slaw, with heat from the jalapeños,” are what Mr. Heaney said inspired his favorite dish.

Mr. McCormack, who worked in the parking lot at Beach Bar nearly 20 years ago, shucking clams for customers from a raw bar, decided to name his restaurant for the experience. But the ambiance is all about his needs today.

“We wanted somewhere family-friendly and fun,” he said. “My kids were tearing restaurants up, so we had to make a place to take them.”

Shuckers is located on Foster Road in Hampton Bays at the Beach Bar. Hours are Fridays from 4 to 10 p.m. and Saturdays and Sundays from 2 to 10 p.m.

Cowfish, which enters its second season located on the bay just south of the Shinnecock Canal, is chef David Hersch’s second restaurant in the hamlet. He opened it following the success he had at Rumba, just down the road.

Mr. Hersch, who hails from New Orleans, Louisiana, said his vision at Cowfish is “No gimmicks, great food, great service, and a nice environment.”

The Mowi Wowi Sushi Roll is stuffed with lobster, asparagus and mango wrapped in avocado and topped with baked scallops, crabmeat, chili sauce and tempura flakes. The result is a cascading pyramid of seafood and sushi rice, soft and crunchy, sweet and spicy.

Mr. Hersch’s favorite dish showcases his New Orleans roots, he said. Fresh mahi-mahi is cumin-crusted and served over Spanish rice and topped with a tasso-ham hollandaise. Tasso, a staple in New Orleans, has a spicy, smoky flavor and matches well with the hollandaise and the fish, he reported.

The owner was also quick to mention Cowfish’s Sunday brunch, which is held every Sunday from 10:30 a.m. to 1 p.m.

“We do an amazing New Orleans-style jazz brunch,” he said. “It’s a brunch like no other.”

Cowfish is located at 258 E. Montauk Highway in Hampton Bays. Lunch is served starting at 12:30 p.m. Tuesday through Saturday and Sunday brunch is from 10:30 a.m. to 1 p.m. The outdoor bar will remain open until 1:30 a.m. every Friday and Saturday in season.

Sundays On The Bay

Sunday’s on the Bay is going into its third season with a new chef and a new menu. Local chef Brian Mazzio, known around town as “Chef Mazz,” has brought his Caribbean/Asian/Spanish twist to a menu of classic seafood dishes. Additionally, Sundays, which is open year-round, features seasonal fruits, vegetables and seafood.

The Sunday’s Seafood Sampler is perfect for any shellfish aficionado who enjoys a little booze with his or her crustaceans. The platter includes three oysters, three shrimp shooters (shrimp cocktail served in a shot glass with bloody mary mix, cocktail sauce and a splash of citrus vodka), three clams, and half of a chilled lobster, served with cocktail sauce and a mignonette sauce.

Appropriately. the signature dish for a restaurant on the bay is Local Flounder. Chef Mazz serves pan-seared fish over greens and seasonal vegetables with a lemon-basil vinaigrette. On the side is a heaping portion of BLT (bacon, leek and tomato) mashed potatoes. The flounder is delicate and acidic, while the potatoes are hearty, savory and salty.

Chef Mazz’s favorite dish lends some Asian flare to the menu. The Asian-style scallops are pan-seared in clarified butter and placed atop a soba noodle salad. The dish is finished with wakame seaweed, crunchy wontons, wasabi micro-greens and a soy/ginger vinaigrette.

For those who like to imbibe, be sure to order the Surf n’ Turf Bloody Mary, which is a bloody Mary souped up with beef stock, crispy smoked bacon, shrimp cocktail and an Old Bay rim.

Sunday’s On The Bay is located at 369 Dune Road in Hampton Bays. The restaurant is open for lunch and dinner seven days a week, year-round.