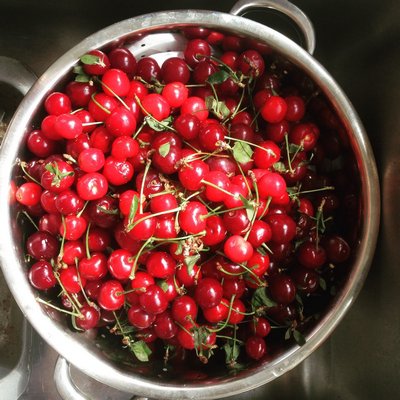 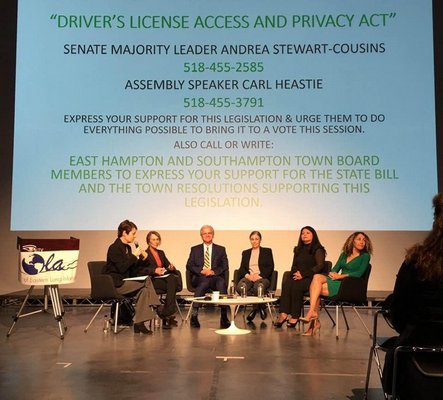 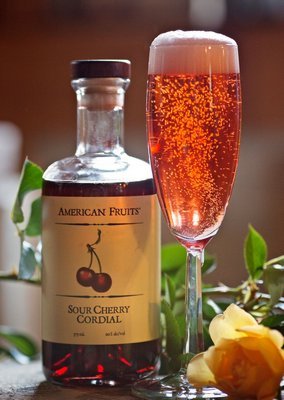 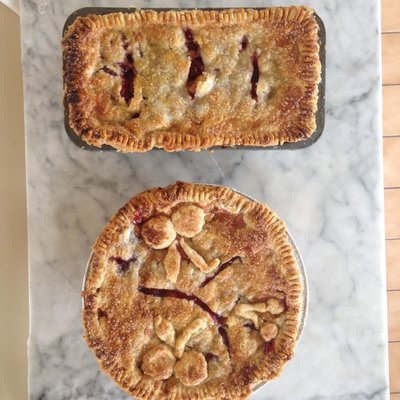 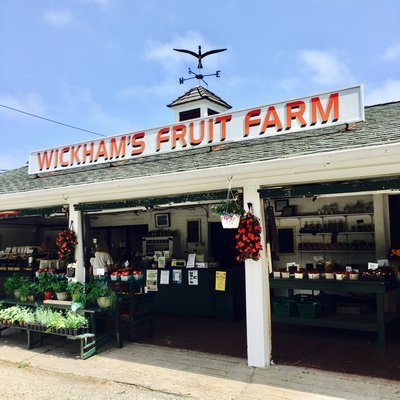 I count myself among the Eastern Long Islanders who live and die by the first breath of asparagus, by the ripening of early June’s strawberries after so many months of supermarket-chilly fruit. If long winters are a rite of passage, the bounty of summer feels like a hard-fought reward after so much suffering: Here we are, winter’s survivors, arrived for the fruits of our labor.Every July, I know with certainty that I have survived another winter when I see the first sour cherries at market.

The Prunus cerasus. This small, bright red and hyper-seasonal fruit, known for its tartness and bake-worthiness, has a long, fabled history. Today, the sour cherry thrives in Canada, France, and the United States. On Long Island, where weather is oh-so-fickle, this elusive fruit makes an appearance for but a week a year: Harvest generally falls at the same time as the Fourth of July holiday.

There are five varieties of sour cherry planted in the United States: Early Richmond, English Morello, Meteor, North Star and Montmorency. Sour cherry devotees (consider me one) will tell you that the Montmorency is the crème de la crème of cherries, especially when it comes to baking.

Named for an area of France near Paris, the storied history of the Montmorency goes back to the Roman Empire: Legionnaires discovered them growing alongside the Black Sea, harvested them and carried them on their travels, introducing the fruit to soldiers, who planted trees and used the fruit and wood as sustenance in battle.

You may have seen sour cherries butting up against the traditional, large, dark variety at your local farmer’s market—although perhaps you haven’t; they’re more perishable and smaller than sweet cherries, and some fruit growers don’t even bring them to market at all. Unlike their larger, darker cousins, sour cherries can’t really be eaten straight from the bag; they’re mouth-puckeringly tart. But the bright notes make them perfect for baking.

At Wickham’s Fruit Farm in Cutchogue, where owner Tom Wickham also makes superlative, yeasty pies from his orchard fruits—some of the most affordable great pies on the island, at $12 apiece—cherry enthusiasts can pick their own sour cherries, for one week a year, while the harvesting is good.

Sour cherries provide a host of food-centric opportunities. They’ve also become fashionable in the nutrition world: They’re unusually high in potassium, an essential mineral that maintains blood pressure and hydration. Athletes often drink “tart cherry” juice post-workout as an aid to muscle recovery, or snack on dried sour cherries as a part of their fueling regime.

A 2004 study by physician Federica Blando indicated that sour cherries reduced inflammation, another bonus for hard-working athletes looking to ease some strain on their bodies.

Running life aside, my passion for sour cherries did not originate with my hours on the track. In fact, my own obsession with this fruit started inauspiciously, in 2010, when I happened upon a recipe in The New York Times by cookbook author and food reporter Melissa Clark: Twice-Baked Sour Cherry Pie. I was a cherry-lover, yes. But I had never before tried the sour cherries that Ms. Clark advertised in her magnetic ode to pie.

All my life, I have loved sweet cherries. In Massachusetts, where I was raised, cherries were a symbol of true, pure summer, which we waited for with bated breath, through nor’easters and chilly springs. And then, in late June—finally! That American fruit, stripped of pretense, round, red (but not too red), iconic. Summer had arrived.

But we did not have sour cherries where I grew up, or not in my house, at least. The first time I made Ms. Clark’s pie, having hunted down sour cherries in Union Square, I realized what I had been missing.

Sour cherries are small, firm and none-too-sweet. Baked in butter-heavy dough, they feel deliberate, important. They punctuate the sentence that is an otherwise fine-enough pastry.

Can a fruit change a perspective? Can recipes change lives? In the intervening seven years since I discovered sour cherries, I have envisioned them everywhere—accompanying cheese on a composed board; reduced in sauce over Long Island duck; pickled, for snacking; in a delicate French clafoutis; and, of course, in pie.

“The thing about sour cherries,” Ms. Clark told me over the phone, “is that the season is so brief.” She’s right: There’s a whimsy to the fruit. It’s ephemeral. Catch it before it’s gone. “You make one pie,” she said. There is time for only one.

Perhaps this is what moves me so much about this here-today-gone-tomorrow fruit, the sweet/sad nostalgia, the memory of something that was good but is now gone.

I am reminded of a roasted sour cherry custard I served my father the week before his death. It was July. The season felt particularly brief, like my father’s life, I suppose, and so I held onto it, wrangled it, pitted those cherries with deep, sad pleasure.

Like any good thing in life that we wish to revisit, the season is too short. “It goes so fast,” Thornton Wilder wrote in “Our Town.”

And it all does. It really does.