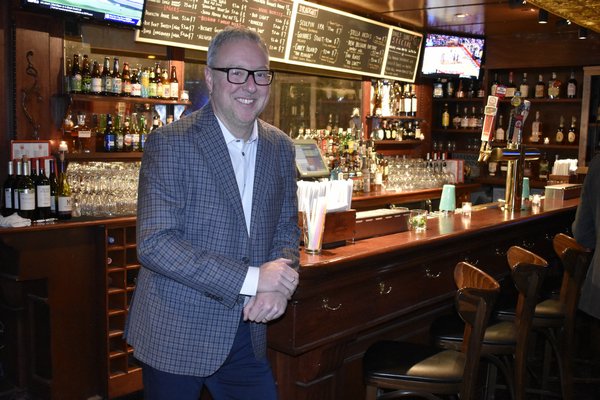 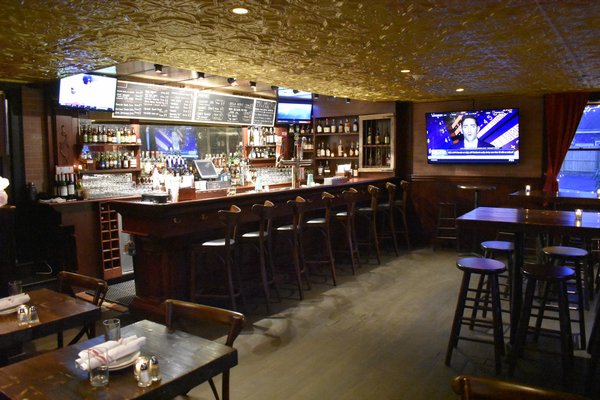 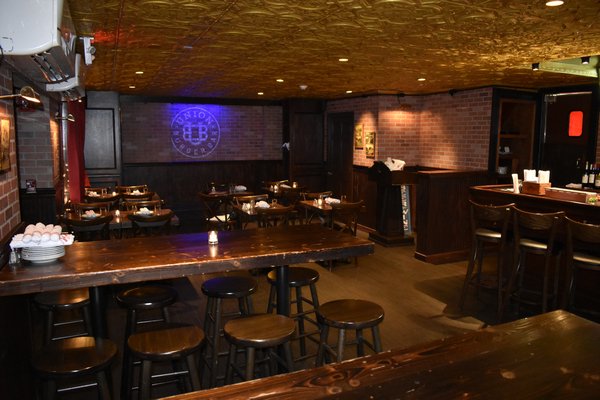 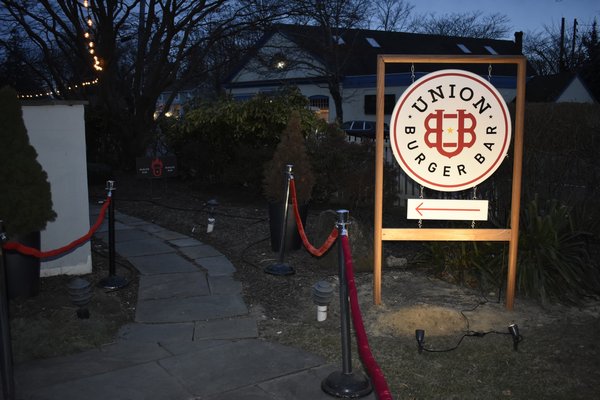 Restaurateur Ian Duke and chef Scott Kampf of Southampton Social Club and Union Cantina are introducing a third restaurant to Southampton Village: Union Burger Bar.The burger-focused spot with an intimate dining room and bar shares 40 Bowden Square with the Mexican restaurant Union Cantina but has its own entrance.

At Union Burger Bar on Thursday, January 17, the eve of its opening to the public, Mr. Duke spoke excitedly about the new venture.

“Scott and I started talking about doing a burger bar a little over a year ago, more because we both happen to love burgers more than anything else,” Mr. Duke said. “It wasn’t really necessarily about a need—more just wanting it and enjoying it.

“With our little village losing a few restaurants over the last year, it sort of sparked my attention to thinking, ‘Well, we don’t have an awful lot of options on places to go where you can get a burger.’ There are restaurants that serve burgers—I’m not arguing that—but, I mean, a restaurant that’s focused on a burger.”

“We didn’t have the degree of interest in tequila that I would have expected,” Mr. Duke said. He also noted that he no longer needed the space for private events, because last spring the beer brewing tanks—vestiges of the Publick House—were removed from the dining room, freeing space for tables.

“I found that the degree of interest for most people for Mexican food is a once-a-week idea, and the idea behind this: People eat burgers two, three, four times a week,” Mr. Duke said.

He is clearly proud of the beef they have chosen to serve: Niman Ranch hormone- and antibiotic-free black Angus from humanely raised cattle. “Our meat is absolutely undeniable,” he said. “It’s fantastic. Once you have a bite, you’ll keep eating, even if you’re full. You can’t not. It’s hilarious.”

The menu offers seven chef-recommended beef burgers with various toppings and sauces, but patrons can elect for a custom burger with their favorite ingredients.

“Our menu is designed for those who are looking to enjoy burgers that we have created, as well as burgers that you can create your own,” Mr. Duke explained.

The Coopers Beach Burger, for instance, is 8 ounces of beef with avocado, bean sprouts, pineapple marmalade, lettuce and tomato on a multi-grain bun. The Mac Attack! is made with mac and cheese and onion hay on a pretzel roll.

However patrons enjoy their burgers, Mr. Duke just wants them to have a good time.

“What’s better than sitting down, having a burger, French fries, a killer shake, a beer, and, to be quite honest, bourbon?” he asked.

“Pappy Van Winkle is a famous bourbon that is not really available anywhere anymore,” he said. “They only make about a hundred bottles a year. And so, when people get it, they don’t put it on menus—they keep it and drink it themselves. And I want to try and expose people to it.”

The drinks menu also includes an extensive list of tequila in a nod to the space’s former use as a tequila bar—and because Mr. Duke is a fan. “It’d be remiss if I wasn’t going to include it,” he said.

Mr. Kampf designed his own signature milkshake, “The Kampfire,” a vanilla-and-marshmallow milkshake with a chocolate graham cracker rim, topped with whipped cream, a s’more, chocolate sauce and a cherry.

Mr. Duke, who conceived of the “Not Sorry,” with Nutella and Reese’s, said that heads turn when the shakes come out of the kitchen. “They’re fantastic. It’s indulgence at another level.”

The room is set for 50 people, and he could open up the sliding wood wall to spill over into the main dining room that Union Cantina uses. But that’s not his intent, he said. He wants to maintain the intimacy of the space. In a place that holds 50, everyone knows or gets to know each other, he said, while in a larger venue, no one meets.

He noted that the Manhattan bar that his father, Jim Duke, ran from 1968 to 1995, Drake’s Drum on the Upper East Side, was only slightly larger than the space Union Burger Bar occupies. Small bars like that, that served burgers and pub food, “they were the precursors to what we all do now,” he said.

Mr. Duke has another burger joint, Lucky’s Famous Burgers in Manhattan, with locations on 23rd Street and 52nd Street, but Union Burger Bar and Lucky’s have no similarities between them, other than serving similar foods, he said.

Lucky’s is quick, made-to-order burgers. “The idea is to cook it fast and get you your food, in and out,” Mr. Duke said of Lucky’s. “That’s not at all what I want here. This intimate setting is designed to serve, to eat and enjoy great food that’s comfort food. But we’re not rushing you.

“I do think we’re going to do a tremendous amount of take-out business because there is a void in the market for being able to get a good burger take-out, and that will also apply to delivery when we start that,” he added.

There will be happy hour Monday through Friday from 3 to 6 p.m. with $5 beer, $7 wine, $9 mixed drinks and half-priced appetizers, and a $10.95 daily lunch special with a burger and side.

On Wednesdays, Union Burger Bar has a throwback: $5 burger night. The deal revives the recession-busting “Bail-Out Burger” special offered a decade ago by Barrister’s, the Southampton Main Street restaurant that closed in 2013 after 34 years in business.

Mr. Duke recalled how that restaurant would fill with locals on Wednesdays.

“I think it’s a great homage to something that everyone loved and, again, a great way to get out and have a little bit of fun,” he said.

Union Burger Bar opens for dinner daily at 5 p.m. Lunch will be added to the schedule starting Friday. For more information, visit unionburgerbar.com.

Winter Fun In The Green Room

The Green Room Bar on the third floor of the Sag Harbor Cinema is now ... 25 Jan 2022 by Staff Writer

Foodstuffs: The Best Bees In The East And New Beverage Director For Honest Man Group

Winter Brunch At Gurneyâ€™s Gurneyâ€™s Montauk has launched one of the hamletâ€™s first brunch options ... 18 Jan 2022 by Staff Writer

Itâ€™s January, so you know what that means. Time to realign those priorities and kick ... 11 Jan 2022 by Annette Hinkle

This week, the Highway Group announced its upcoming acquisition of the widely celebrated Wainscott bakery, Breadzilla. Located at 84 Wainscott NW Road, the spring 2022 relaunch will become the new home base for the groupâ€™s Autostrada Catering, which provides an array of bespoke offerings, from a mobile wood-fired pizza oven to large-scale wedding events. Through this next stage for both Autostrada Catering and Breadzilla, Highway Group strives to preserve the bakeryâ€™s prominent offerings and essential staff members. Longtime fans of the Wainscott fixture, the Highway Group team is also behind Highway Restaurant & Bar in East Hampton and Main Street ... 10 Jan 2022 by Staff Writer

Thereâ€™s this recurring nightmare I had as a child where the McDonaldâ€™s â€śHamburglar,â€ť staple of ... 3 Jan 2022 by Staff Writer

The holiday season has arrived with the new year right around the corner. This season, Claudeâ€™s Restaurant at the Southampton Inn is offering awe-inspiring throwback dinner theater shows to close out 2021. Claudeâ€™s has been transformed from a casual eatery to a location to enjoy a cabaret dinner and show, unlike anything else on the East End. With a few successful shows already in the books, Claudeâ€™s has plenty more offerings leading up to the new year. On New Yearâ€™s Eve, Friday, December 31, Claudeâ€™s will host special cabaret dinner and show featuring world-renowned award-winning singer Cristina Fontanelli. With her ... 20 Dec 2021 by Staff Writer

Noodle-Making Demo â€¨At Sen Sag Harbor Ever wanted to learn to make your own noodles? ... 7 Dec 2021 by Staff Writer