Four Fountains: A Bittersweet End With A New Beginning - 27 East 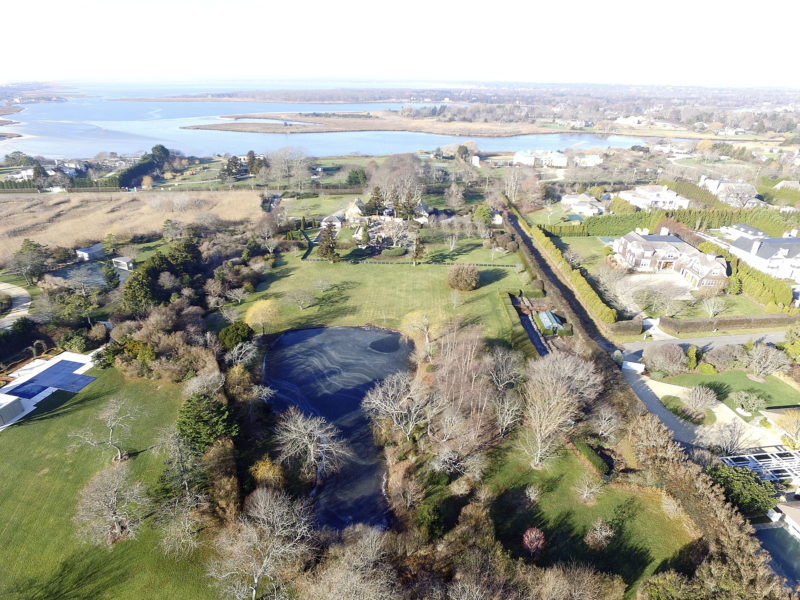 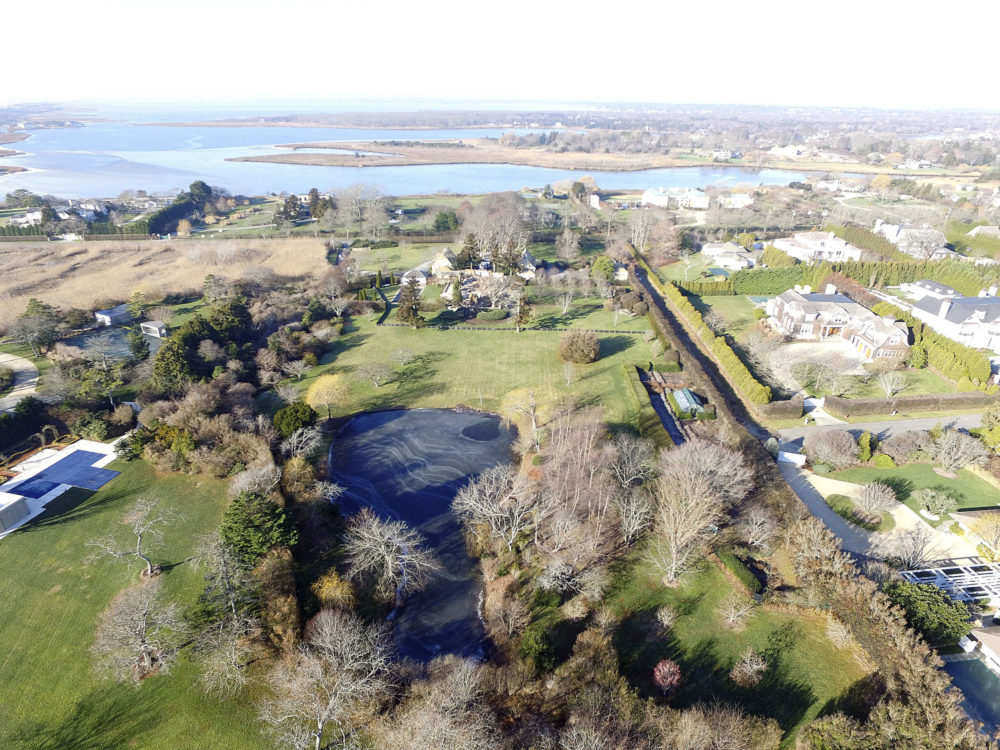 The main house on the Four Fountains estate in Southampton village was demolished in mid-December of 2019. 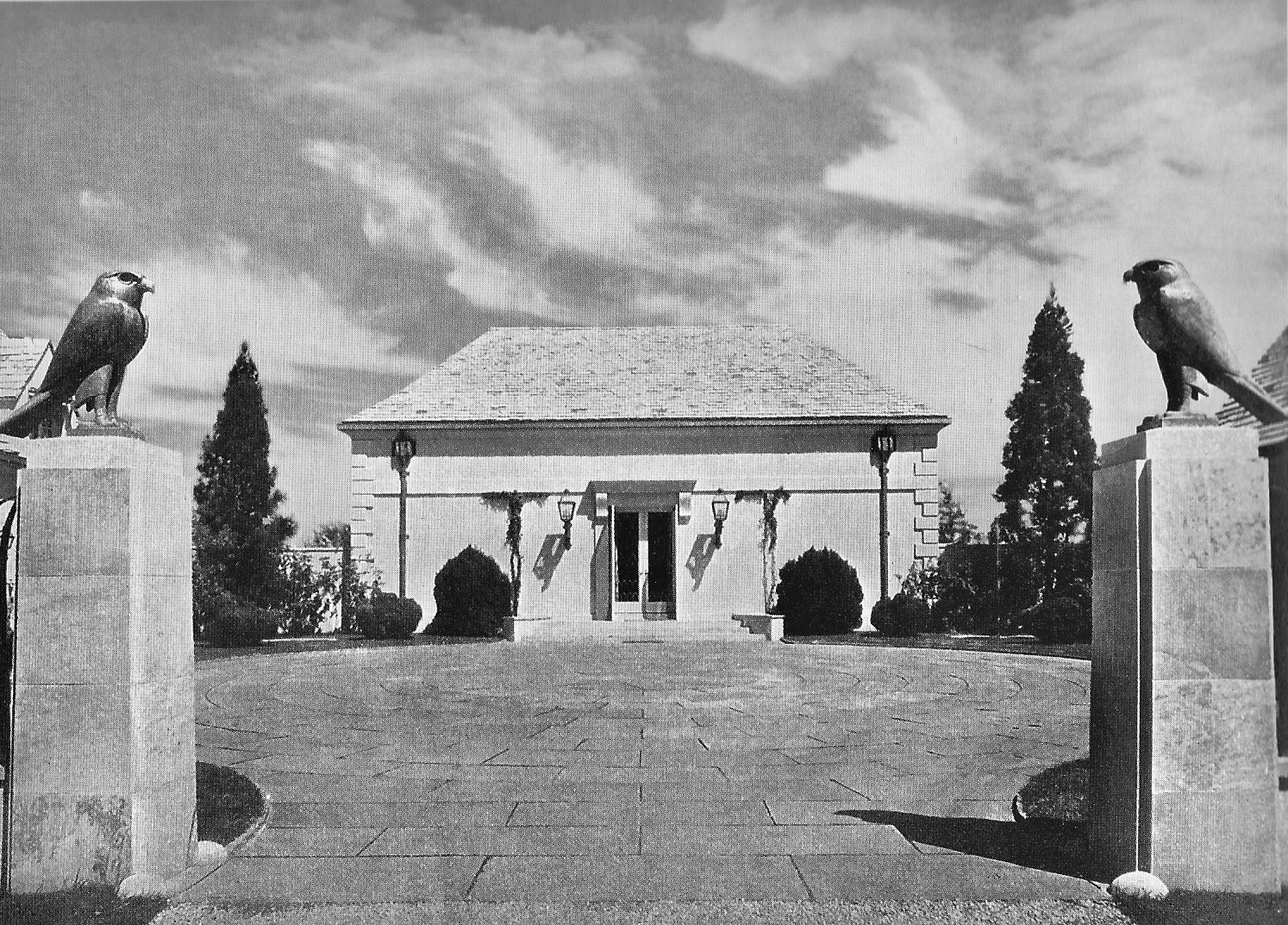 Four Fountains, circa 1931, with its original facade. COURTESY ACANTHUS PRESS 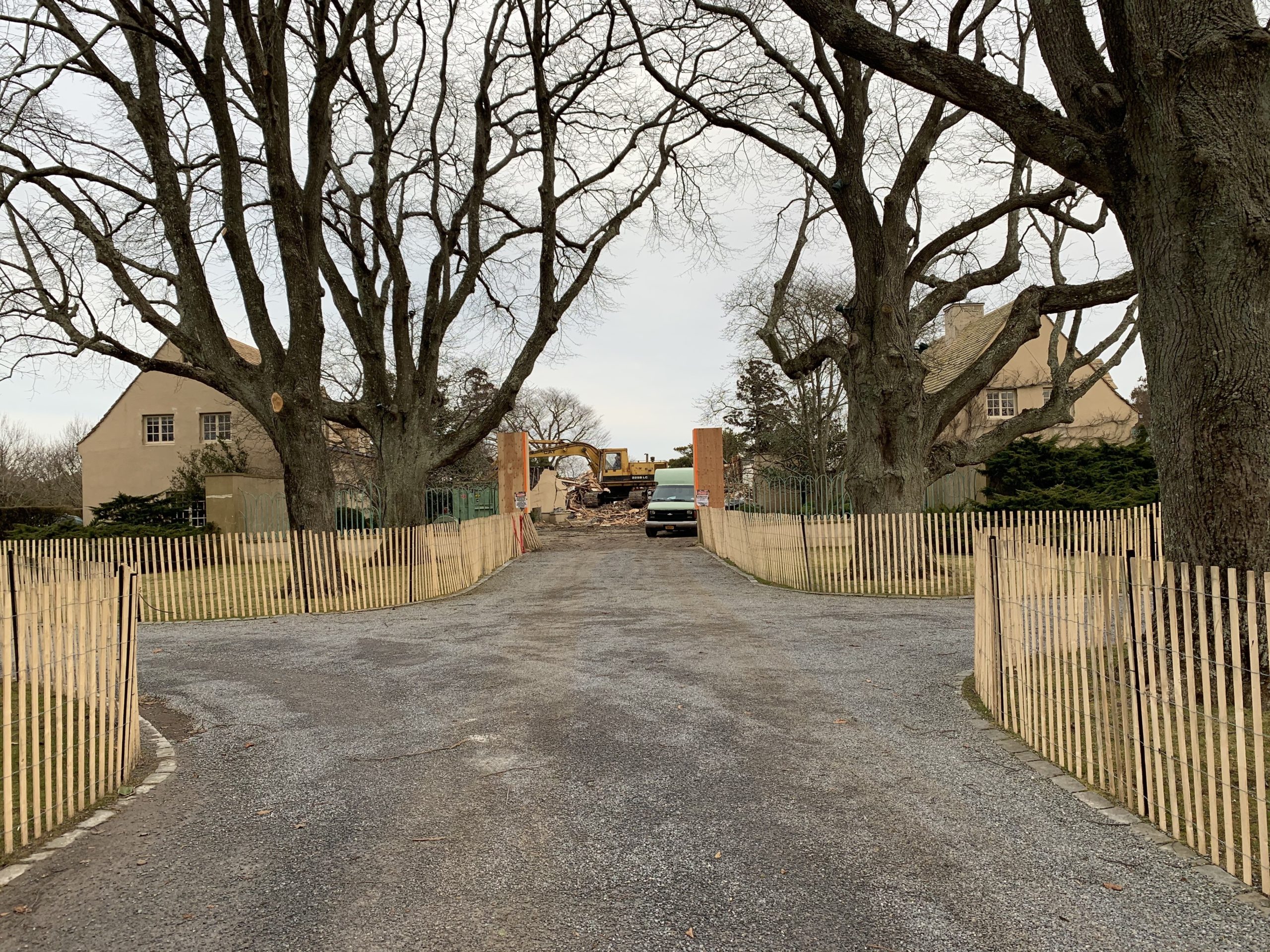 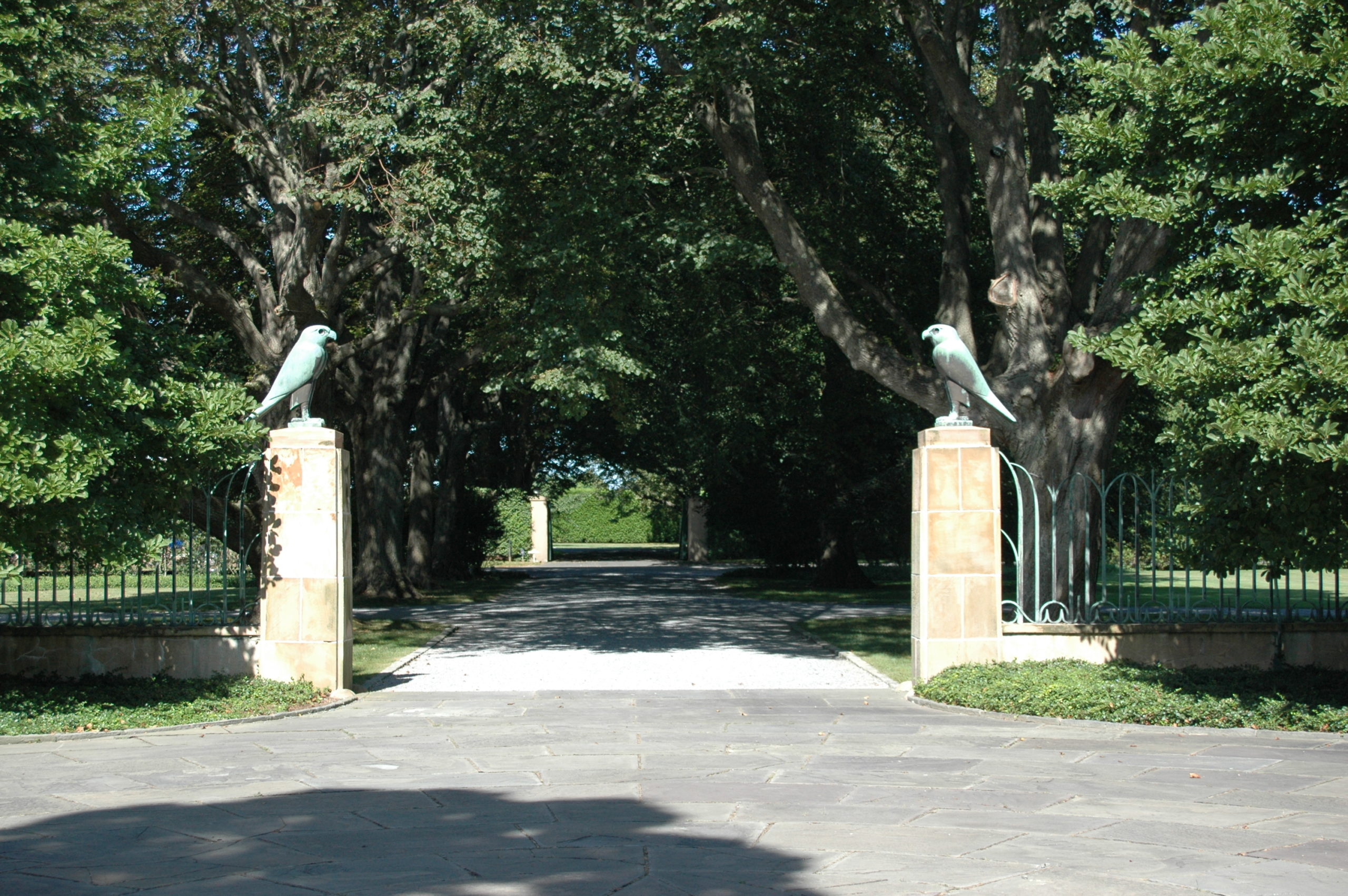 Four Fountains, one of the most unusual houses in Southampton Village, with an equally storied past, met the wrecking ball on December 18, 2019.

The other buildings on the property will remain, along with the courtyard and the entry sequence of crab orchard sandstone pillars crowned with bronze falcons. The main house, also known as the Tyng Playhouse, was neither landmarked nor part of a historic district. It certainly would be considered historic, however, for its architectural significance, its meaning to the community as a cultural center, and for the persons of interest who occupied it for 90 years.

Designed by the architectural firm of Peabody, Wilson and Brown for Ethel and Lucian Tyng in 1928, it was originally conceived as a playhouse/arts center for theatrical presentations, concerts, art exhibitions, films, bridge tournaments and fundraisers for destitute painters and the Southampton unemployment relief fund during the Great Depression.

The 7.5-acre compound also included a garage with chauffeurâ€™s quarters, a guest house and a gardenerâ€™s cottage. The square forecourt in front of the building was lined with concentric rings of large flagstone pavers. In each of the four corner spaces there were plantings as well as fountains â€” and so the house earned the moniker Four Fountains.

The Tyngs sold Four Fountains in 1942 to Archibald Brown, its original architect, and his wife, Eleanor, the president of the interior design firm McMillen Inc. The couple converted the playhouse into a summer home, with the auditorium becoming an open-plan living/dining area.

When Maria and Bruce Bockmann, the most recent owners, bought the property, they put an addition on one cottage and renovated another, while adding terraces and making significant modifications to the garden.

As each owner made changes over the years the compound gradually transformed to satisfy their needs and desires. Despite these changes, Four Fountains, from the street, remained essentially unchanged to the passerby.

The Bockmanns did not want to see the house demolished. The property, which had been listed with real estate brokers for more than four years, drew little interest. This had nothing to do with the condition of the propertyâ€™s structures â€” the Bockmanns had been excellent stewards of the premises and grounds on Halsey Neck Lane for 27 years.

The playhouse, though, wasnâ€™t designed as a residence. The house contained an entrance foyer, a 40-foot-square main room with a 20-foot-high ceiling, two bedrooms, minimal closet space, tiny bathrooms and a small kitchen â€” not exactly an ideal arrangement for a family. During its 90-year history, not one of Four Fountains four owners had young children in the house.

Frustrated with the real estate market, Mr. Bockmann applied for a demolition permit last June as a tactic to generate interest in the property.

When news about the demolition permit reached me from multiple, frantic individuals, I was stunned. Years ago, while researching Four Fountains for inclusion in â€śHouses of the Hamptons, 1880-1930,â€ť the Bockmanns graciously gave me and my co-author, Gary Lawrance, a tour of their home and property. It was clear to me how much they loved the house, and news of a possible demolition seemed inconceivable. I spoke with Mr. Bockmann at the time, and he told me he would not sell the house to anyone who would tear it down.

However, the circumstances leading to the demolition of the playhouse stemmed from a confluence of events.

The property in recent years had been flooded twice, during Hurricanes Irene and Sandy. Water from Shinnecock Bay surged into Taylor Creek and across Halsey Neck Lane to a level just 6 inches below the main floor of the house. The new Federal Emergency Management Agency regulations placing Four Fountains in a flood zone (nonexistent in 1928) require any new building on the property to have a ground-floor elevation 8 feet above the floodplain.

For improving an existing home above a particular value, such as Four Fountains, no significant restoration could be undertaken without raising the house. The existing house sat 3 feet above sea level. The premiums for flood insurance, if one can even obtain it for a house situated so precariously, are, needless to say, quite expensive. In order to obtain flood insurance, the house would need to be raised.

According to Mr. Bockmann, contractors advised against raising the masonry structure with its stucco walls and heavy crab orchard roof tiles. Due to the risk for substantial damage, elevating the house wasnâ€™t a feasible solution.

Since more flooding and storms will keep coming with climate change and rising sea levels, the house would be at significant risk of damage going forward. Additionally, during consultations with contractors, it was determined that all of the interior walls of the building were clad in plaster laced with asbestos. It could be mitigated, of course, at great expense, or potentially crack during a move.

Having declined offers from buyers who just wanted a land grab but not the house, the couple finally found a buyer whom Mr. Bockmann described as having the â€śhistoric sensitivityâ€ť they felt would be appropriate.

After consulting with architect Peter Pennoyer and analyzing FEMA and wetlands regulations for three months, the buyer and the Bockmanns came to an understanding that keeping Four Fountains as a significant house in the village was the correct thing to do. Retaining the cottages and the forecourt while rebuilding the facade of the main house is a worthy goal. With a new home built behind the replicated facade to accommodate a family, as well as complying with all regulations and codes, the decision was made to demolish the existing structure.

Most of the time, preservation appears to be a losing game on the East End. There are many who will probably view this demolition as an outrage, despite the fact that history can be integrated with modernity. What was seen from the street before was essentially just the front elevation. With more codes and regulations, it will become even more difficult and costly to save historic properties in the future.

In this case, ironically, what began as a playhouse will become a stage set and a reminder that the past can be present.