How To Grow Montauk Daisies - 27 East 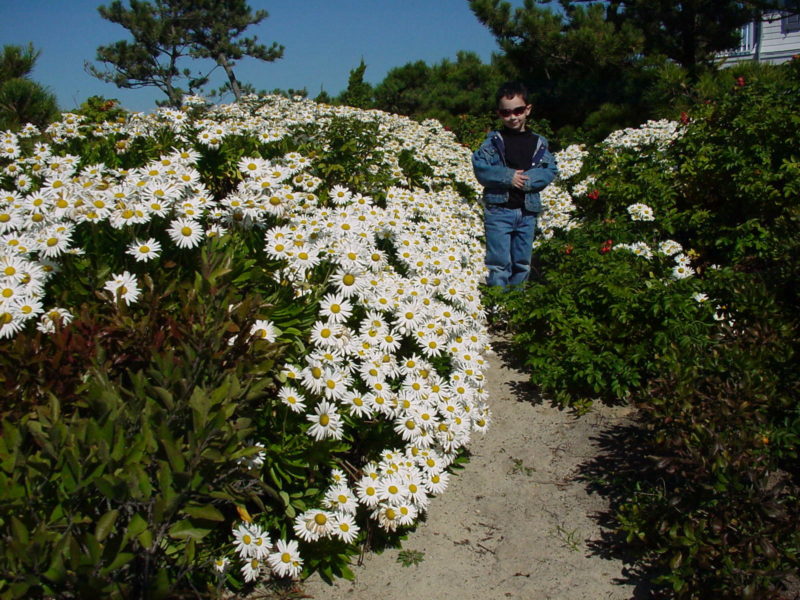 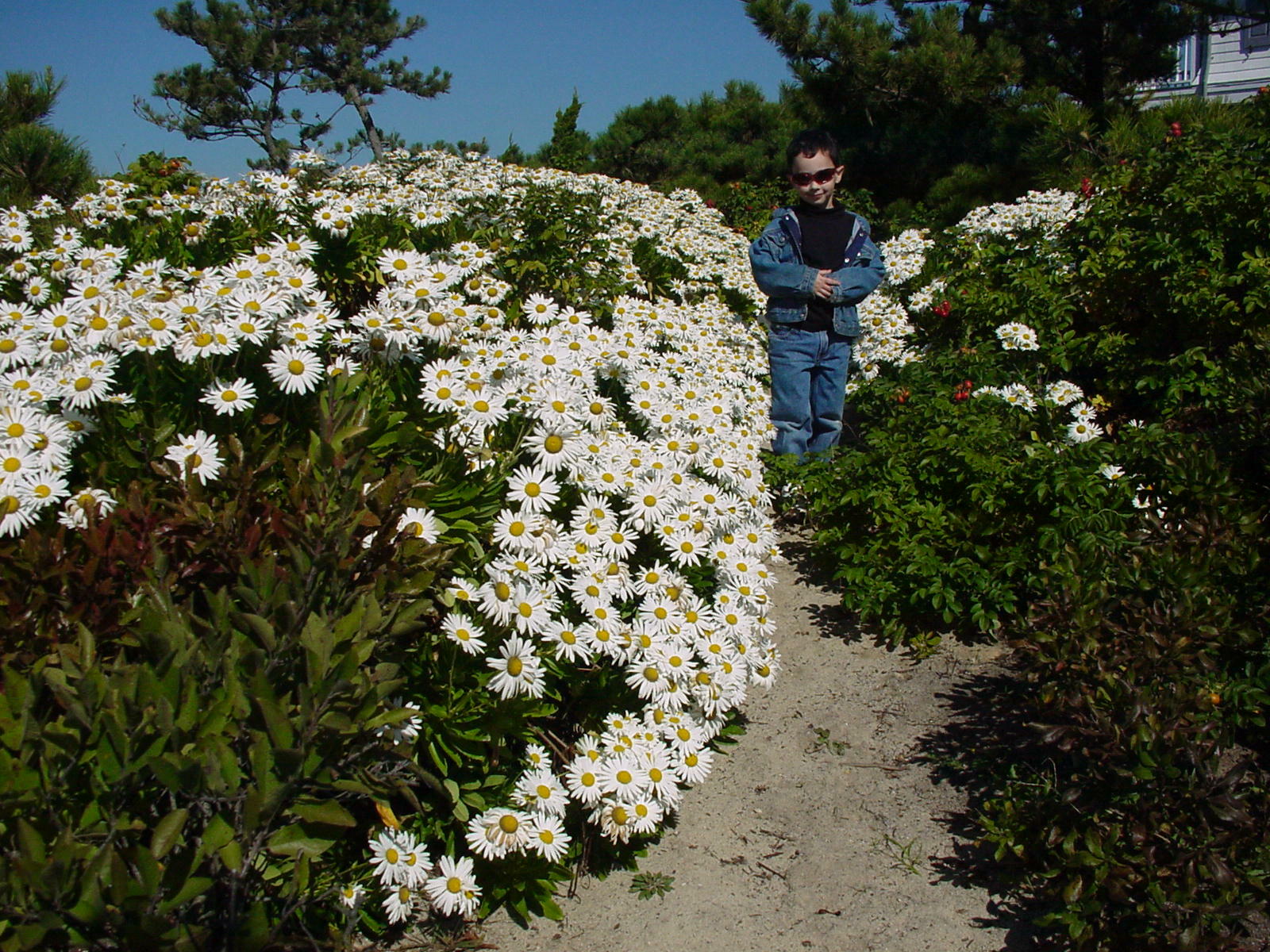 A 4-year-old Hampton Gardener Jr. (now 25) walks down a dune path of Montauk daisies. Note the bright red rose hips from the Rosa rugosa to his right. ANDREW MESSINGER 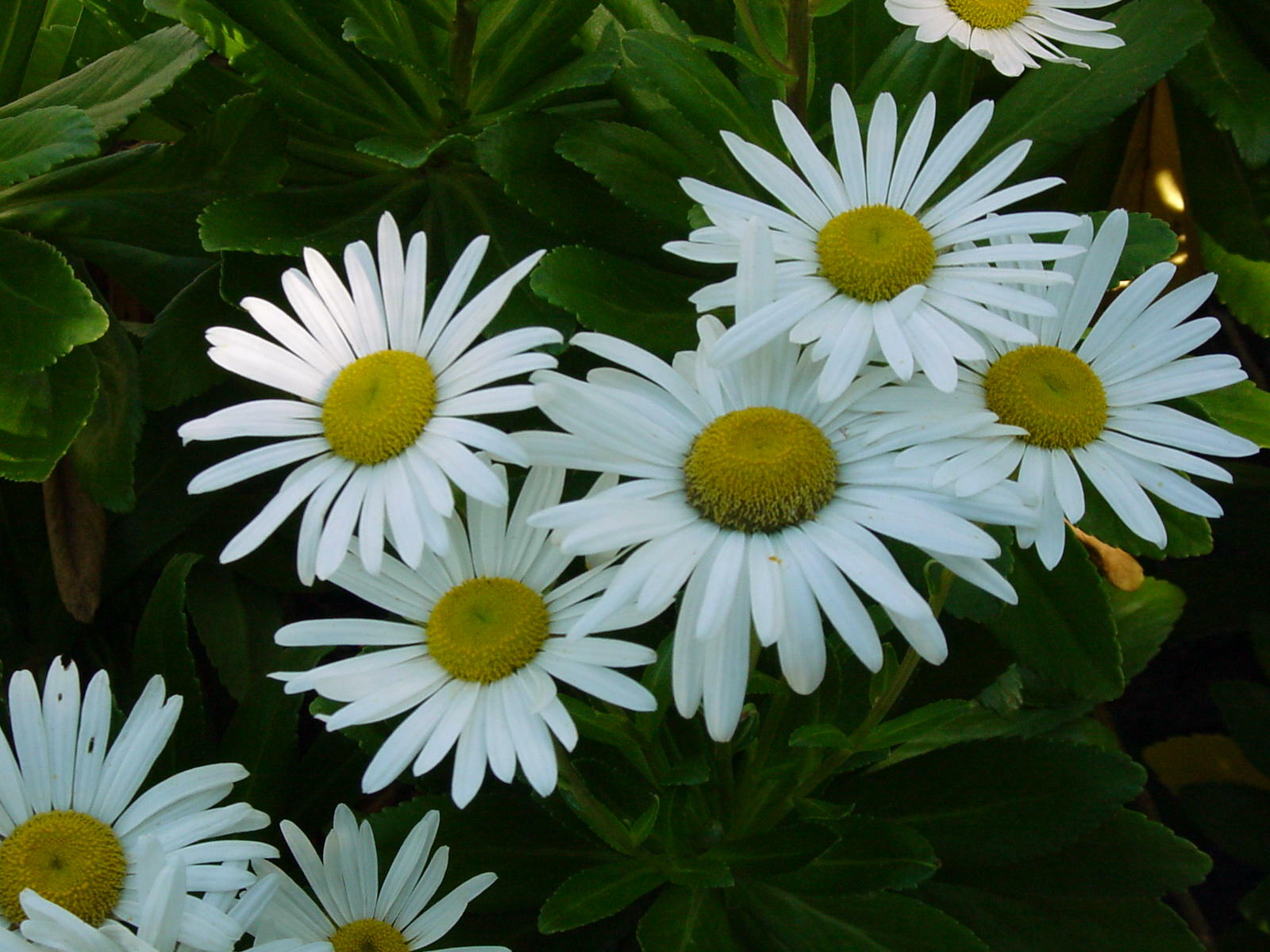 Blooming now in a garden near you, the famous Montauk daisy, native to Japan but naturalized along the sandy shores of the East End. Disease and insect free, a great pollinator and a late feeding spot for honeybees and monarch butterflies. Sorry, only available in white. ANDREW MESSINGER 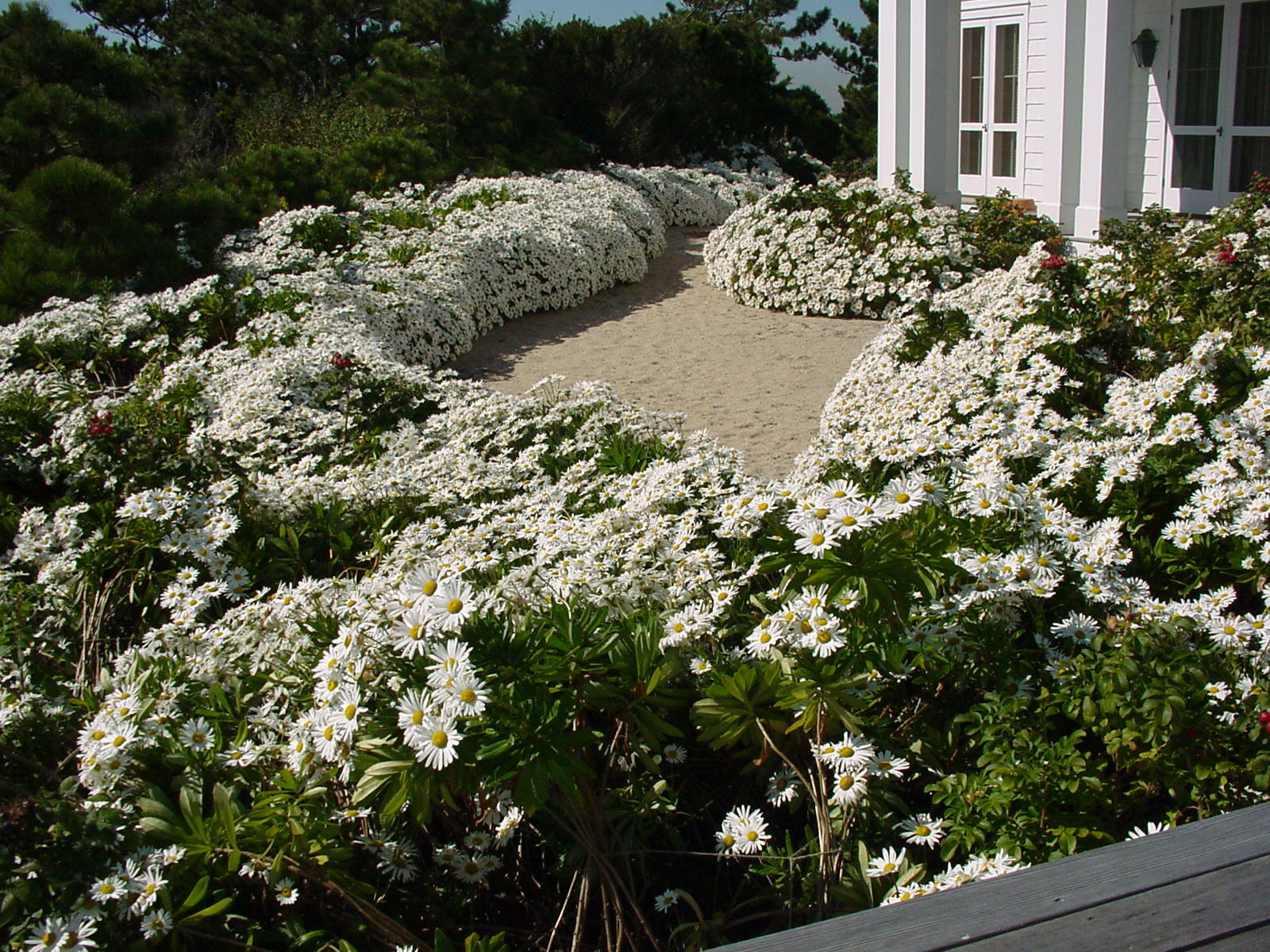 A mass planting of Montauk daisies on the ocean-facing side of a Southampton home. Notice the plants are growing in pure beach sand and the plants are tight and not falling over in this mid-October shot. ANDREW MESSINGER 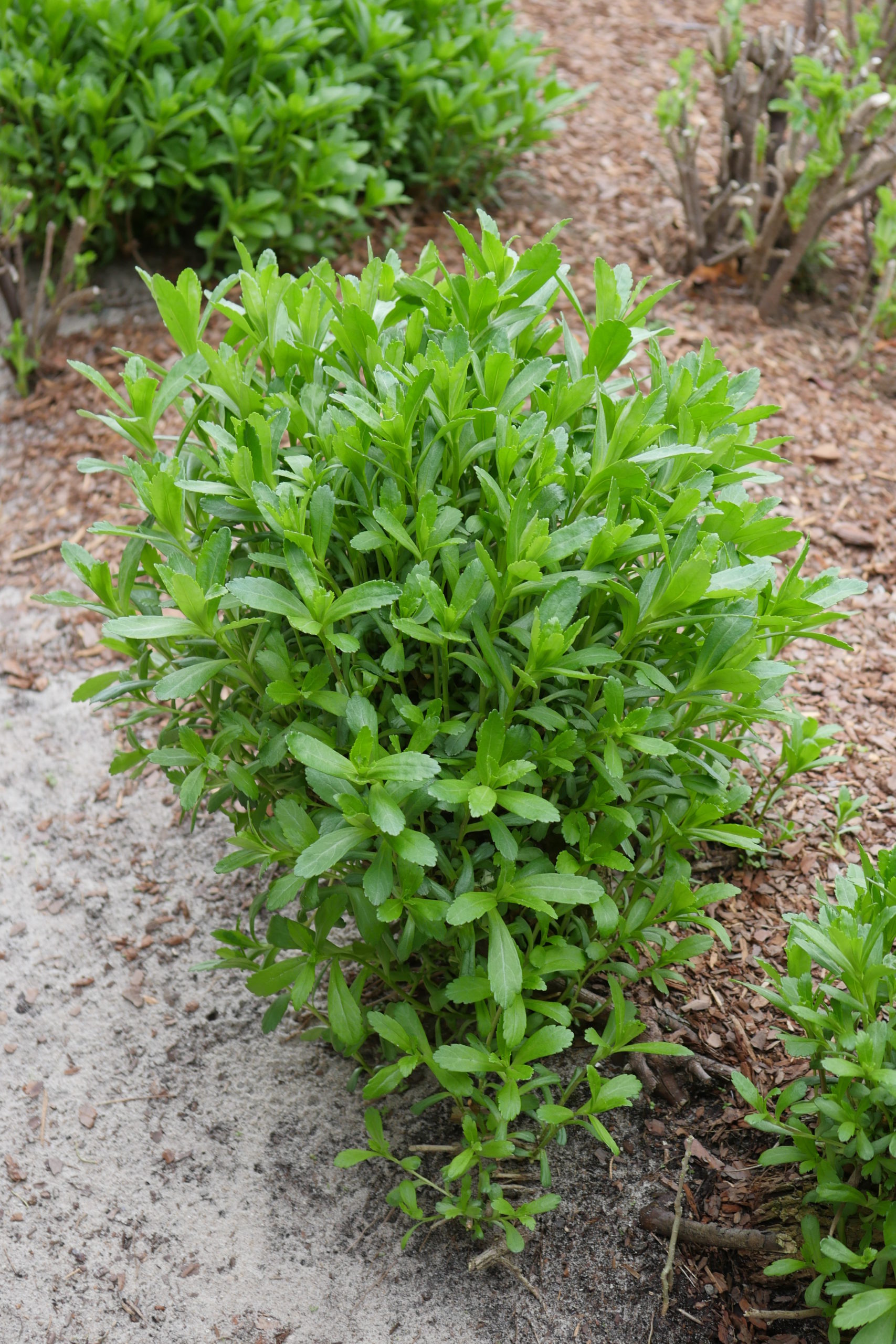 By early May the foliage had begun to fill in nicely but in a few weeks it will be tipped back to encourage a lush compact plant that won’t topple over when it flowers. ANDREW MESSINGER 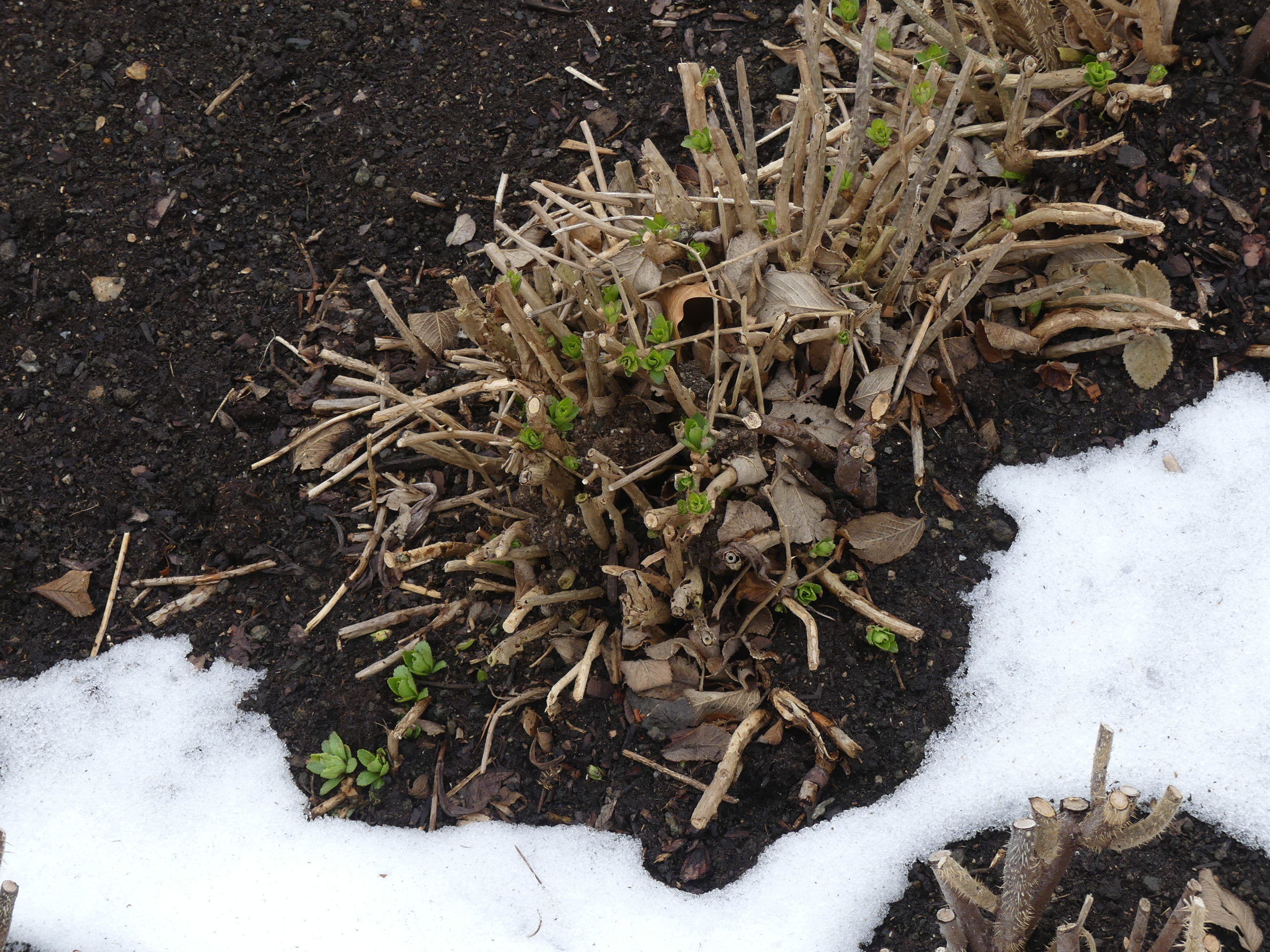 As the February snow melts, some new shoots are revealed from this decade-old Montauk daisy. The shrubby perennial was cut back to this size in late November when blooming was done and the cold had set in. ANDREW MESSINGER

When I migrated from the North Shore of Long Island to the East End in 1974 a whole new world of gardening and plants opened up to me. I lost the joys of a deep, rich organic soils and topsoil but quickly learned how to garden in what was often just sand. My father could and did grow just about anything, but if he’d moved out here he would have certainly been challenged.

There were two plants that I distinctly remember in my introduction to gardening in sand. The first was the prickly pear cactus (Opuntia humifusa) which I found growing throughout the Shinnecock Hills. I learned how to grow it from seed and from its vegetative “paddles.” We had a dedicated area on the Southampton College campus where it grew in a large triangular garden outside the business center building. Sadly, you’re more likely to find it in a garden center and much less likely to find this native succulent growing in the wild.

The other plant I “discovered” was a “daisy” that bloomed in October, and it became another of my obsessions. I learned how to propagate it and how to grow it so it behaved as a proper ornamental and even tried to get others in the horticulture field to develop the plant so it flowered in colors other than white. That effort was and remains unsuccessful. Known back then as Chrysanthemum nipponicum, you can now find this plant, Nipponanthemum nipponicum, in garden centers in much of the United States. And right now it’s in full bloom. It’s sometimes sold as the Nippon daisy, but most of us know it as the Montauk daisy. It’s not a native, but it has naturalized (it is not invasive in the east) in several places out here, on the New England coast and along the Jersey coast.

You can find the Montauk daisy sold in 4-inch pots up to gallon and larger sizes. But — and this is an important “but” — the plants sold in garden centers have often been given light and growth regulator treatments to keep them short (not their nature) and blooming earlier than in nature. Some, not taking the time to understand the plant, often complain about it getting too tall, flopping over and in some cases rotting. Not only can I solve all those problems for you, but I can tell you how to grow your own Montauk daisies. It’s incredibly easy to grow them by the dozens — almost for free.

What makes this plant remarkable is that it’s a succulent that grows perfectly well in pure sand, requires no fertilizer, and has few to no disease or insect problems. Nonetheless, you can kill it with care especially when it’s overwatered or fertilized. It’s a great, late-blooming pollinator that’s often the last plant visited by honeybees and Monarch butterflies. It’s also both deer and rabbit resistant. Sadly, summer visitors rarely get to see this plant in full bloom. Their loss, our gain.

“The Salty Thumb,” a garden guide published by the Montauk Village Association in 1967, has a drawing of the plant and notes that it was used in the Montauk dunes, but the guide had nothing more to say about it. It is, however, mentioned in the 1983 publication, “Gardening on the Eastern Seashore,” in which it’s also referenced as the October daisy.

So this plant has been out here for a while, but when it was first introduced to Montauk and by whom remains a mystery. We do know, however, that it was first found along the rocky slopes and shores of Honshu Island along Japan’s coast and somehow made it to Montauk never becoming invasive. There are several spots where it’s naturalized on Long Island including at Montauk and Orient, and a few spots on the Connecticut coastline, but it’s never become invasive or an “issue” plant.

The Montauk daisy thrives in a slightly organic to sandy soil. It tolerates salt spray so it’s a great plant for properties along the ocean or bays. It does need full sun, though, and the two biggest sources of failure for this plant are when it’s planted in shade and when it’s planted where there’s an irrigation system. Plant it in full sun. Only water it when initially planted, and then there’s no need. Feeding it will result in an overly lush plant that will grow too tall and bend over before it flowers, making it look very sloppy. The plant is also frost tolerant, though it’s rarely exposed to frost out here and will only die back after a hard freeze.

As a somewhat shrubby perennial, the plant often dies back to the ground in the winter, though some stems may survive and develop shoots late in the spring. Winter mulching results in crown rot, so if you do mulch, do it very, very lightly. New shoots will emerge from the plant crown and on surviving stems. On mature plants, these crowns can get 1 to 2 feet in diameter. Every two to four years the crowns can be divided and spread out. New shoots will elongate into May. In mid to late May, cut these shoots back 3 to 6 inches to induce shorter and bushier plants instead of tall plants that can flop over. If the plants are pruned after the buds are set, they may not flower as the bud formation is stimulated by day length. If the buds are removed, they may not reform. One reference by an uninformed inland writer suggests deadheading the plants as the blooms fade. However, deadheading will not result in new or more blooms.

From this point, there’s nothing left to do but wait for the flowers in October. Flowering of established plants takes place in October and may last into early November. Once the flowering is finished you can sheer the spent flowers to keep them tidy. Along the Jersey Shore, it’s not uncommon to find these plants still blooming at Christmas. During the growing season, the plants may shed some lower leaves. Don’t panic, this is normal.

So how do you make more? You can grow these plants from seed but you’ll wait two years for them to get to flowering size. You can divide them but then you only get a few more plants from each division. The best way to grow a few plants to hundreds of them is to do it from the cuttings taken when the plants are headed back in May. The process is very simple.

Take cuttings with four to five leaves and a stem section of about 3 inches. Do this on a cloudy day. The cuttings can be planted or “struck” in clay pots (plastic pots will retain too much water) or in wooden flats about 4 inches deep. Strip off any excess foliage leaving four or five leaves and a couple of inches of stem. Strike the cuttings in clean builders sand (NOT beach sand) and you can mix in a small amount of peat moss so the mix will retain a small amount of moisture.

Using a pencil make holes in the soil 3 inches deep, put your cuttings in the hole so the stem parts are buried with the leaves not covered by the soil. Mist the pot or flat a couple of times a day and keep the soil moist but not wet, or the cuttings will rot. Keep everything in bright light, but not direct sunlight. In the warmth of late May, the soil should stay warm. In about two weeks the cuttings will root, and in four to five weeks the cuttings can be moved to small pots in a sandy soil mix. By late summer the cuttings will be well rooted and can be planted in a holding area or directly into the sandy garden.

These new plants will have some flowers the following summer but will be in their glory just two years from cutting. Treat the new plants the same as you would store-bought or existing plantings, remembering to do the tipping back late in May of every year.

The Montauk daisy looks great when planted in long drifts and when the monarchs pass through you’ll see waves of them stopping to feed on the flowers as they migrate south. The display of the white flowers on the green plants with the oranges, browns and yellows of the butterflies are a sight to behold. You’ll be helping the butterflies, giving the bees a late source of pollen and stabilizing the sandy soils all at the same time. Keep growing.