Not All Violas Are Pansies - 27 East 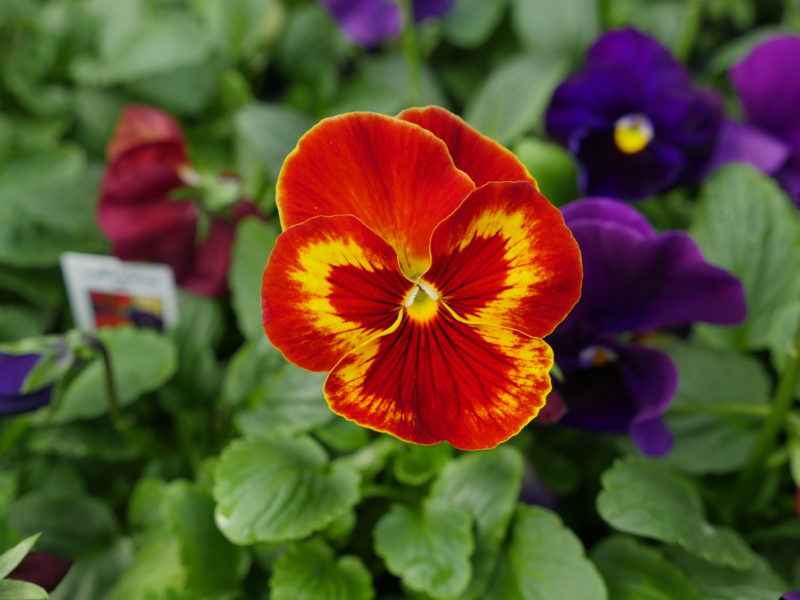 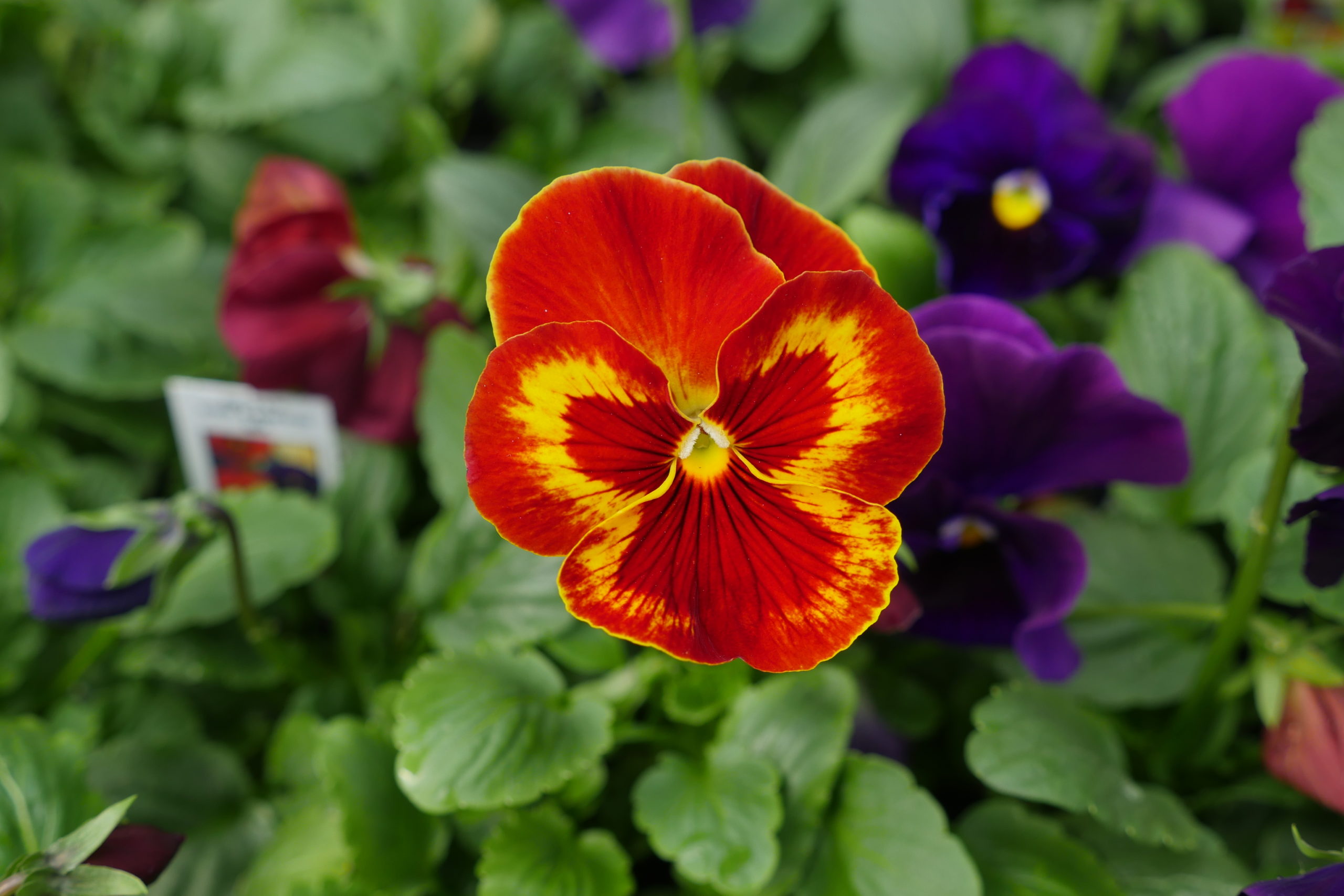 The vibrant colors on this flower show the depth of breeding in these plants over the past two decades. Is this a pansy or viola? ANDREW MESSINGER 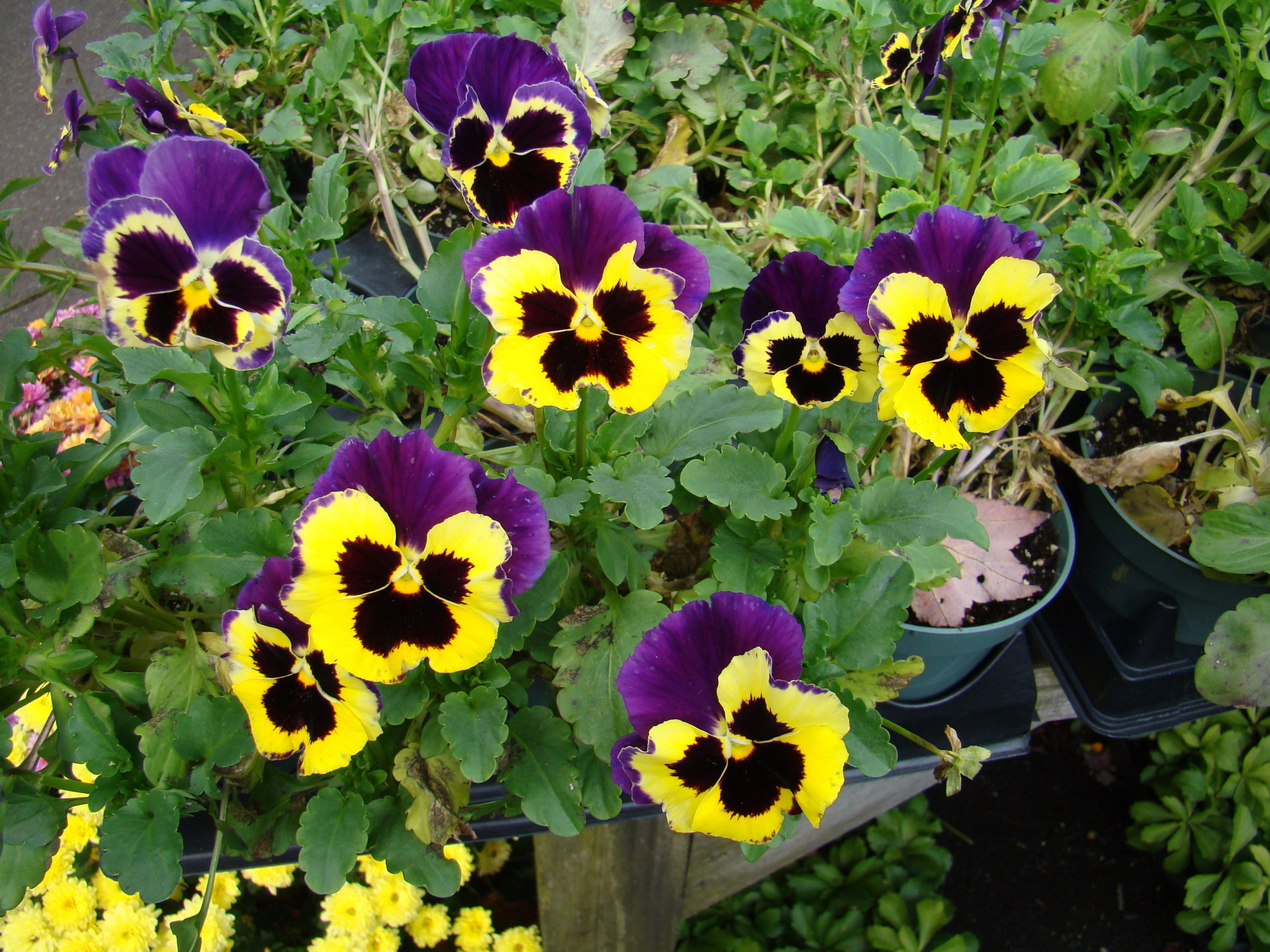 A classic old-fashioned pansy at a local garden center in a 4-inch pot. This photo was taken in October, showing how versatile this plant can be even for late-season use in pots or planters. ANDREW MESSINGER 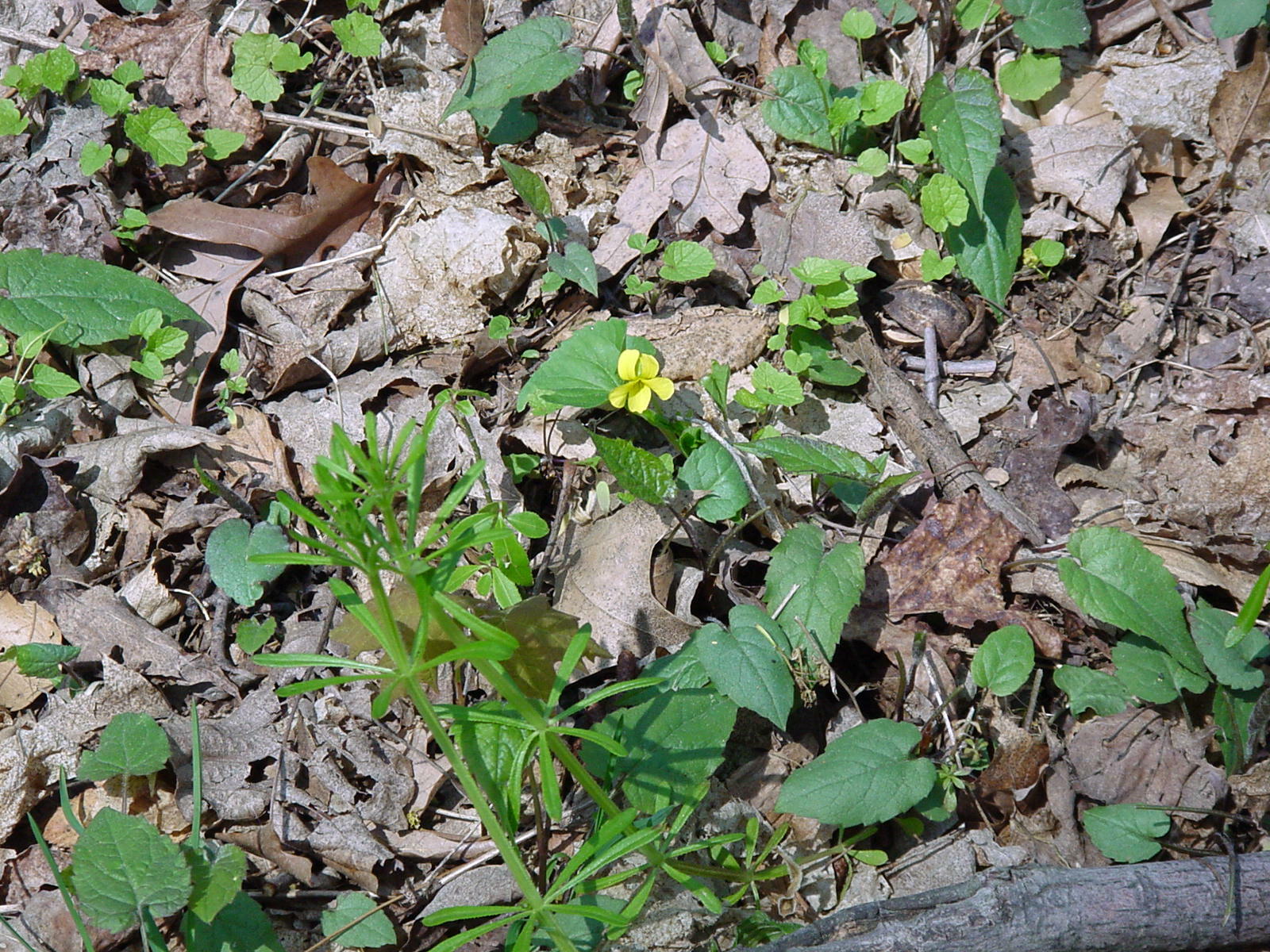 Viola pubescens (note the three lower petals and two upper petals indicating it’s a true Viola) it a native wildflower that can be found blooming on wooded areas during April and May. The flowers are only an inch across. ANDREW MESSINGER 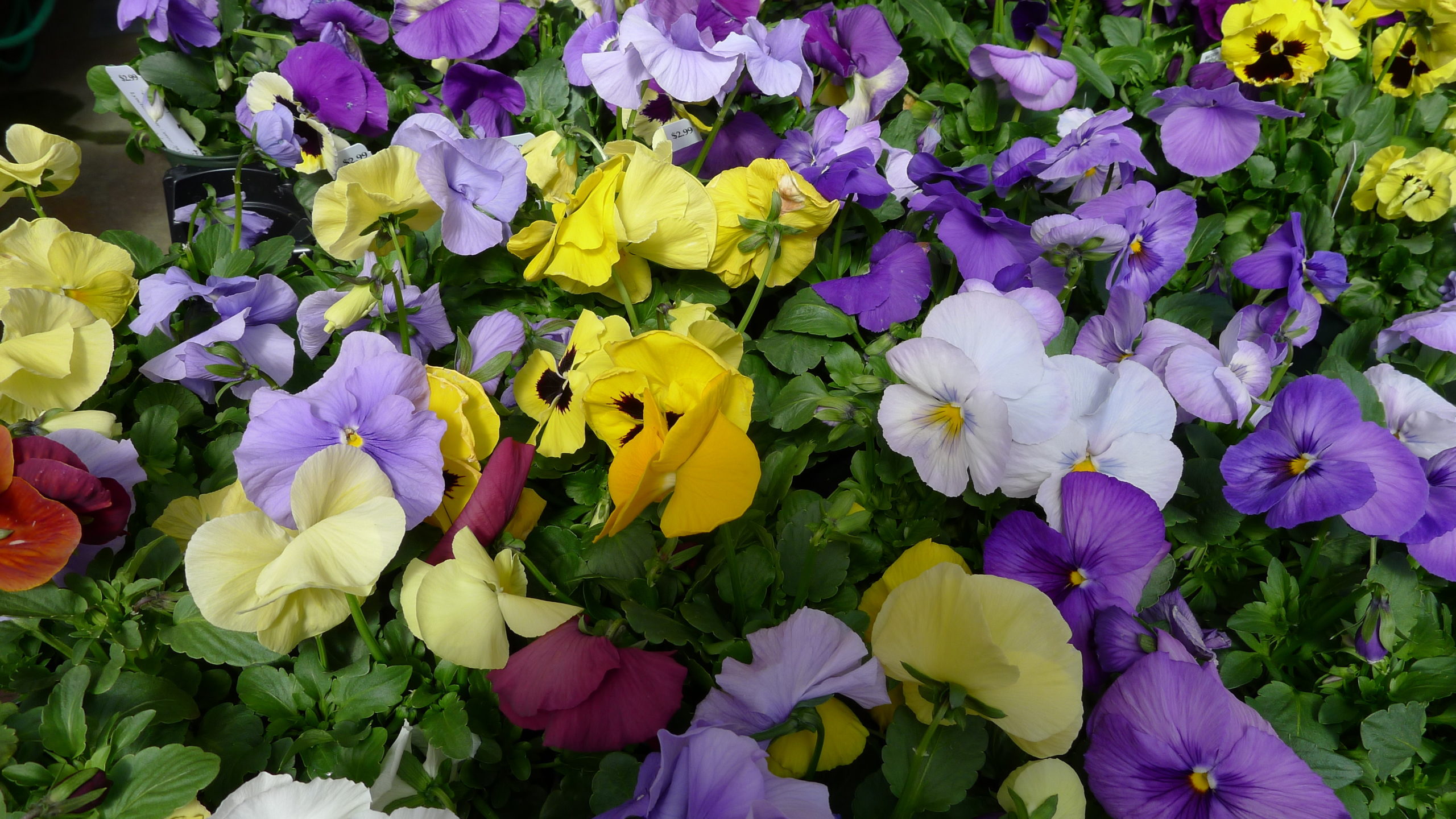 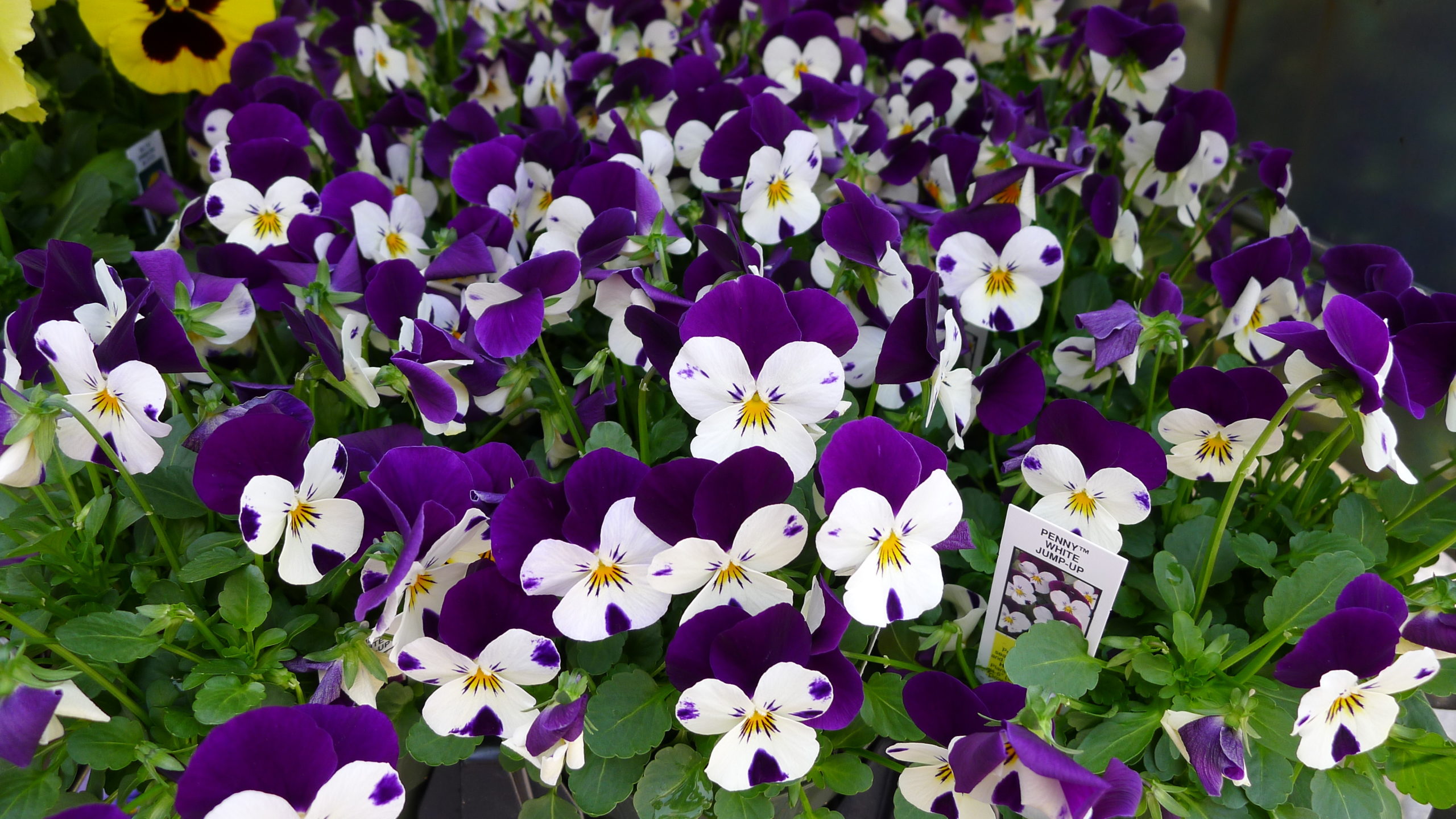 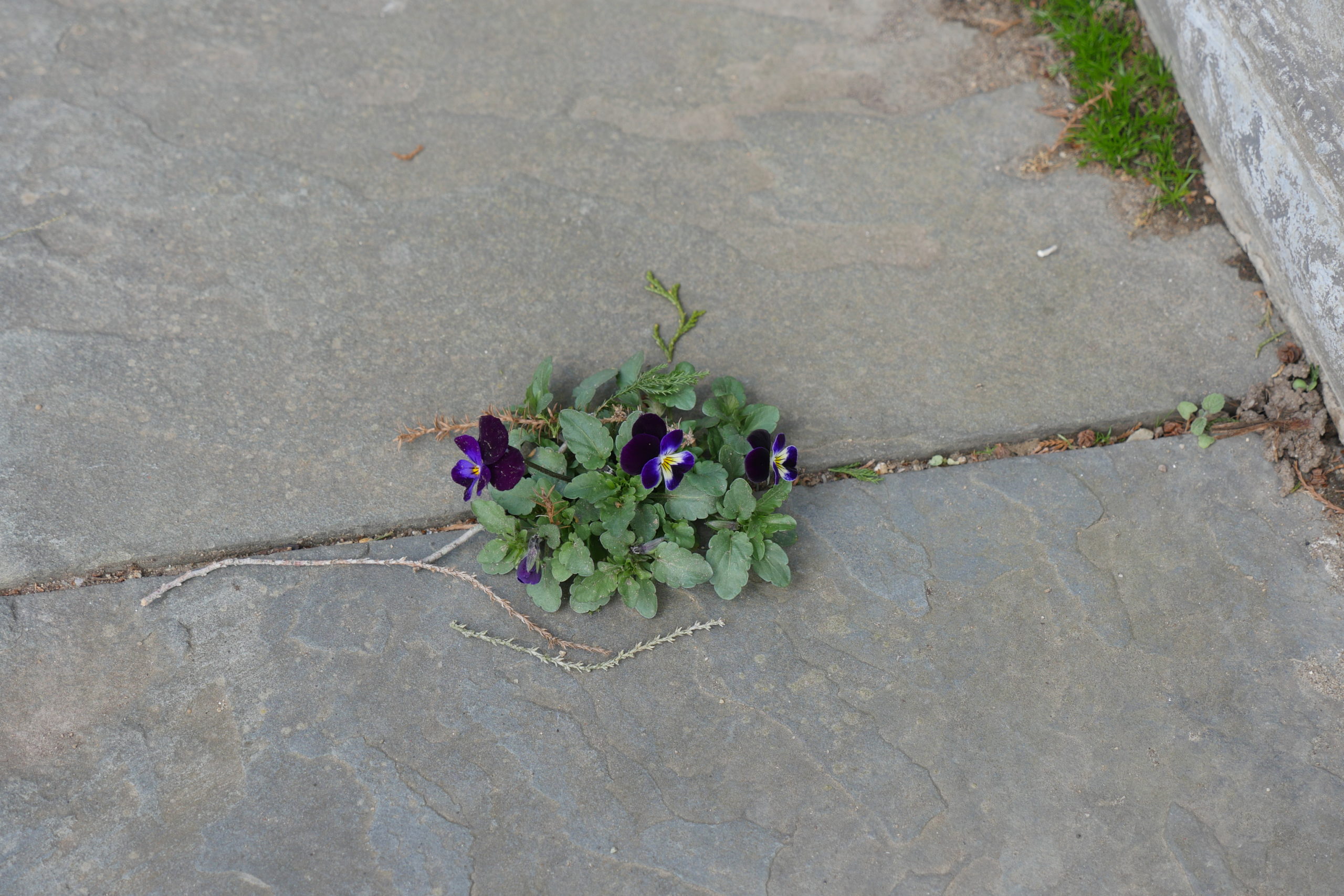 Emerging from between the cracks in patio pavers, this 3-inch plant of Viola Bowles Black was taken in late March. In some areas it may flower sooner as the pavers tend to retain the daytime heat resulting in early blooms. ANDREW MESSINGER 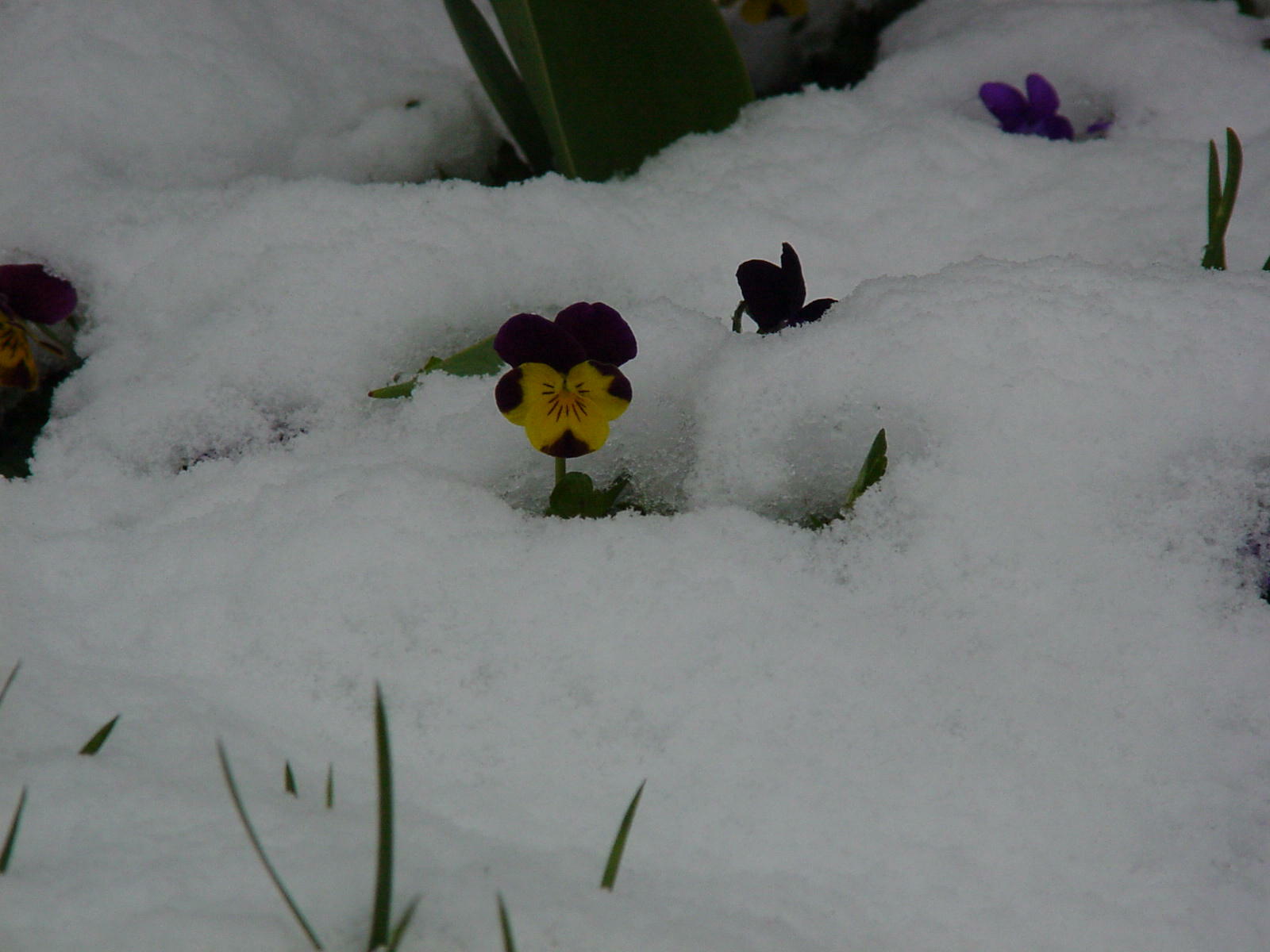 A Johnny-Jump-Up is undaunted by an early April snow cover.

There’s nothing quite a special as going into a garden center in early spring and walking down the aisles of pansies. Their big, often goofy flowers, their range of colors and the wafting sweet scent all add to a plant that seems to exude happiness and the cheer of a new season. Ah, but some of these plants are not pansies, but Violas. And yet, all the pansies are Violas, but not all the Violas are pansies. Does it really matter? Well, that depends.

All of these plants fall into the larger plant family that we simply refer to as Violas, and there is now a debate among breeders and growers as to which is better to grow and sell. Ultimately, the answer seems to be up to us and what we prefer when shopping for these early-flowering plants. So, what’s the difference?

Over the years breeders have developed pansies (Viola x. wittrockiana) for their large flowers and drooping habit. You’ll find names like Jolly Joker, Crystal Bowl, Maxim, Imperial, Universal, Antique Shades and many others that are parts of series of pansies, and you can find different colors within each series. They’re well suited for containers, pots and even hanging baskets as their long stems enable them to hang even though the flowers tend to reach out and flower upright. The color range is as wide as our horticultural pallet, and they can be found in solid colors, bi-colors and multi-colored. For the most part, they are treated as annuals and will tend to die out during the hottest part of the summer, but in some cases, they can be cut back and will come back as less robust plants in the fall.

The true Viola has two petals facing upward with three facing down, versus the pansy, which has four facing up and only one facing down. Violas, especially several of the species, have smaller flowers, and many of them are true hardy perennials, but probably not most of the ones we find at garden centers.

The blue and white “violets” that many of us find on our lawns belong to the species Viola odorata, also called the sweet violet. There are also native species that grow in our woods, Viola pubescens, which is a yellow variety that can still be found in our East End woodlands, but it’s not terribly common.

The wild violets, the ones that show up in your lawn, can be a real challenge if you insist on a pristine blanket of turf. I’ve seen properties where they’ve been allowed to establish and for a month or so in the spring the lawn simply looks and smells spectacular. The rest of the season, though, you have to be able to accommodate the plant that some just see as a weed.

Another example of a popular Viola is tiny-flowered Johnny-Jump-Up, which may be a Viola cornuta and is also referred to as Viola tricolor. Most often sold as a small-flowered but prolific Viola, this variety will often drop seeds. Since it’s a species, the seeds come true, meaning that the children look just like their parents. We often sow these seeds between pavers that have stone dust or soil between the paver joints. The seeds drop from the mature flowers in late spring and germinate late in the season, often flowering the following year making a nearly perennial spring display. More often than not, though, the seedlings are often pulled by a gardener or inexperienced landscaper as a weed so their return can be spotty or not at all.

One variety of the Johnny-Jump-Up was developed by the English horticulturist E.A. Bowles and is called Bowles Black. It has the same size flower as the common Johnny-Jump-Up, but the flowers are an eggplant color and quite unique. The plants are not available at garden centers, but you can buy seeds (selectseeds.com) to scatter in the cracks, crevices and spaces between patio and walkway pavers. The following spring the seeds germinate (or late in the fall) and produce small dark purple flowers that are pretty spectacular along a walkway or scattered across a patio. I resow some every year to maintain the color as some tend to revert back to the tri-color if not rogued.

Keep in mind that pansies are cool-weather plants. They are somewhat frost tolerant and often found on sale both in the spring and again in the fall. If you can’t find what you want at garden centers you can purchase your own seed and start them indoors. Seed should be sown indoors in January into mid-February and you can grow them in large cells or in deep flats. When grown in cells, the plants need to be transplanted into pots to grow them on, but when grown in deep flats, the plants are left in place and allowed to grow. A few weeks before planting out, a knife is used to cut sections of the now well-rooted flat and the sections planted out into the garden. You can find more on growing your own pansies here, hobbyfarms.com/starting-pansies-from-seed-gardening, and most of the seed catalogs have instructions as well.

As for the perennial types, you’ll have to search for these or be lucky enough to find a species like Viola pubescens growing on your property. Remember that it’s Viola odorata that is the perennial that grows in your lawn. Viola labradorica makes a nice ground cover that forms a mat of dark leaves with purplish flowers but can become aggressive or invasive. Viola sororaria “Freckles” can occasionally be found from an online nursery (toadshade.com for seeds and plants) and it will grow in sun to part shade, growing 4 to 6 inches tall.

Back on the commercial side, breeders are trying to decide what’s more important, plants that are easy to produce, more colorful or better outdoor performers. Fall pansy sales have increased every year, but remember that these are plants that thrive in cool conditions. Summer greenhouses, where these pansies need to be grown, are anything but cool, and that’s one of the major challenges. Climate change is also a long-range consideration for growers. At the same time, there are those in the industry who favor a move away from pansies and toward Violas because Violas have a better branching habit — but they still don’t have those enormous flowers that we see on the pansies. Get some of these sweet-scented smiley faces and keep growing.

Many of you write to me with questions, and I try to answer every one.  If you don’t see an answer in your email, check your spam folder.  If you don’t get an answer, please let me know.

I took a look at my weather data, and what I’m seeing in the garden and this year seems to be about a week later than last year.  Early in the season, though, this can mean little.  Don’t be fooled by a string of warm sunny days.  We can still get a hard frost into late April and even a good freeze for a couple more weeks.  Be prepared, especially if you have things started in the veggie garden, and have a covering material such as Remay ready for an emergency.

Last chance to take cuttings from wild beech trees for staking material.  The fan structure of the twigs can provide excellent staking later in the season.

Remember rabbit fencing for your veggie garden if Peter has been a problem. This fencing has smaller openings on the bottom than on the top to keep the rabbits out.  The bottom few inches need to be buried, or sod staples should be used so Peter can’t push his way in.

As expected, the voles have done plenty of foraging through the winter.  Once the snow melted you could see their trails just above the sod and mulches. No poisons work on voles (which are herbivores) but they do have a soft spot for old-fashioned mouse traps baited with small pieces of apple.

Time to get those tick tubes out.

Most roses can be safely pruned now, but make sure you know what variety you’re dealing with and how to prune them.  Same is true with clematis.  There are three types, and each type requires a different pruning technique.

Ads on TV are claiming that some lawn fertilizers will green up your lawn in just weeks.  All well and good, but these are chemical fertilizers, and we know that a fast green-up is at the expense of good root growth.  Good root growth is what will get your lawn through a hot and dry summer.

Worried about Japanese beetle and other beetle grubs in your lawn?  Now’s the time to begin looking for them.  Here’s a link that will help you investigate and know if you’ve got a problem: northeastipm.org/schools/pests/white-grubs.