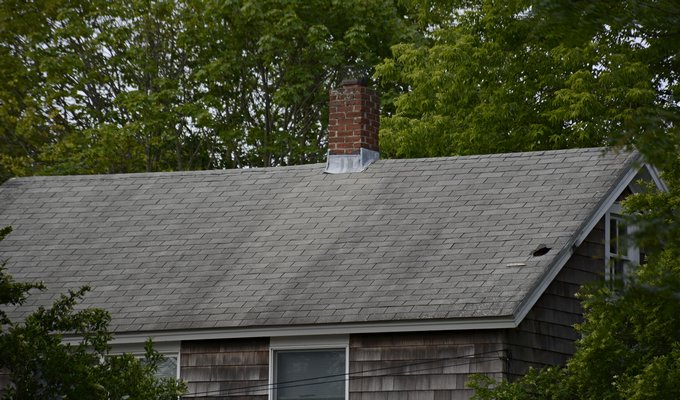 Roof damage is common after a blustery winter, especially around chimney and ventilation. JD ALLEN

A national survey has named roof damage among the top three concerns for homeowners, but nearly 70 percent of survey participants admitted to rarely, if ever, looking at their roof.

Conducted by Owens Corning Roofing, which has partnered with the National Roofing Contractors Association to give the roofing industry access to information and education that could help their business—the survey found that only 7 percent of New York homeowners are willing to hire a professional to check their roof for damage, especially after unpredictable weather.

“The results of this survey bring to light the very real need for Americans to become more proactive with checking their roofs,” said Eric Miller, the marketing leader at Owens Corning Roofing & Asphalt. “Our goal is to help educate homeowners on the safest and most effective ways to do that and how to know when they need to call in a trusted, local professional.”

With second-home owners returning to the South Fork for the summer, Tom Young, the owner of Sav A Roof in Holbrook and Southampton, said now is the time to hire a roofer to take a look before the Northeast’s first storm of the Atlantic hurricane season barrels up the coast. The trouble is appointments for roofers will be hard to come by, he added, as this has been one of the busiest seasons he has seen in the last decade for roof repairs and replacements.

“It’s been a brutal winter, and to install asphalt shingles properly you need 60 degrees and rising, which really didn’t happen until mid-April, and we typically get that in March,” Mr. Young said, referring to the blustery cold winter and now hot summer when a roof contracts and expands, shifting shingles. Roofers like Mr. Young are backlogged by at least six weeks.

Reasons for why most residents don’t bother to get the roof checked, according to the survey, are that homeowners fear the potential high cost of repairs, and the stress involved with finding a professional roofing contractor. The survey also found only 29 percent of homeowners nationwide have enough money set aside to address unexpected roof damage, which Mr. Young told Owens Corning is unacceptable.

“Understanding the importance of checking their roofs and knowing the basics of roof maintenance and damage can help ensure homeowners are better prepared for upcoming weather,” said Mr. Young as part of the survey. “It can literally make a huge financial impact for you and your family.”

Sav A Roof suggests homeowners check their attics for early warning signs of roof problems, including daylight shining in from areas around the chimney, soil pipe and vents, as well as a build up of moisture, staining and discoloration or mold on the ceilings of rooms in the house.

“[Homeowners] should be looking for debris on the roof, for algae and discoloring, and actual curling of asphalt shingles,” Mr. Young said in an interview. “The shingles are saturated in asphalt and as the sun beats down on them the asphalt will cause the shingle to curl. It becomes very brittle at that point and susceptible to being blown off by the wind.”

Shingles that are manufactured today are supposed to last a “homeowner’s lifetime,” Mr. Young, a former installer for shingle manufacturer GAF, said. He now uses Owens Corning’s shingles that have a nylon strip on the inside that prevents severe winds from blowing them off the house. But because of unmet ventilation requirements and harsh weather, the shingles don’t live up to the expected 50-year lifespan.

“A shingle roof could fail in 15 years if it is not properly ventilated,” he said.

There is no set price tag to how much replacing a roof could cost. It depends on the damage to the roof, how much needs to be replaced, how steep the roof is, how much of an overhang is required, how much soffit intake ventilation is required, and many other factors.

Owens Corning and the National Roofing Contractors Association contend that finding a certified local roofing contractor is key. Attributes to look for in contractors are that they encourage finding a second opinion, are fully insured, have valid state and local licenses, and are certified by a trusted national roofing manufacturer.

As for the other two issues at the top of Owens Corning Roofings survey that stress homeowners out: burst pipes and flood damage. The online survey was answered by 2,292 homeowners from different regions conducted between March 20 and 28. There were 105 respondents in the New York-New Jersey area.