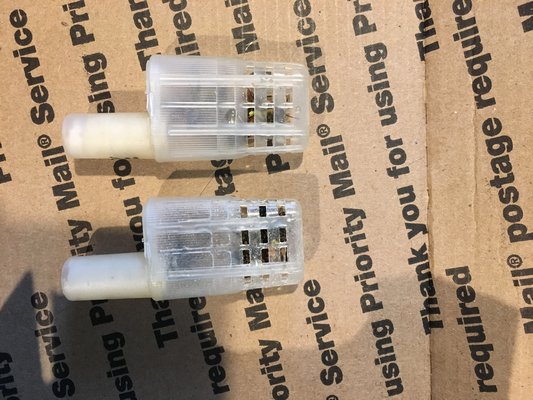 Their royal highnesses, as they arrived in their queen cages. LISA DAFFY 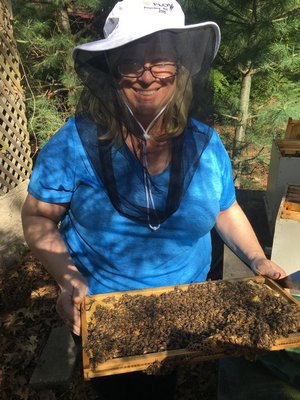 Me, in my happy place. DEB KLUGHERS 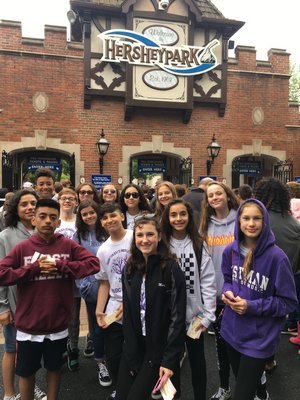 It’s probably my fault, even though I tried to be careful, to do everything just right and treat her like royalty.

Maybe the place just wasn’t fancy enough for her: She didn’t like the way the light landed on the front porch, or she didn’t feel the regulars would be a good influence on her children. Or maybe some of the staff bullied her into leaving. They might even have killed her and tossed her body out the door. It doesn’t really matter. All that matters is she’s gone, and I’m devastated.

Okay, I’m not actually devastated. But I am mildly depressed, out $40, and astounded at my ability to plunge headfirst into every possible beekeeping foible.

Ever since meeting beekeeper Michael Curran in Ireland last year, I’ve been intrigued by his fondness for Buckfast bees. Originally bred by Brother Adam at Buckfast Abbey in rural England in the early 20th century, the Buckfast has a reputation for being easy to handle, prolific in building up its numbers in the spring, and smart about cooling down egg-laying when the nectar flow slows down. Sounds like a winning combination for a beekeeper like me who really needs bees that know what they’re doing.

As with any question these days, the answer to “Where can I find Buckfast bees?” lies on Google. So I searched. I found a breeder in Canada, but the complications involved in shipping live bees across the border—alien bees, at that—were formidable. It made me tired just to read about it, and heaven knows I don’t want to end up on Trump’s enemies list.

Some more e-tunneling took me to the Southeastern Indiana Beekeepers Association website, where I found Scott Novinger, who raises and sells Buckfast queens. Email exchanges confirmed that, yes, he could ship me a Buckfast queen, but no, he couldn’t ship a package of bees, which would have basically given me enough bees to start a new hive. He would ship just the queen in a cage with a few attendants and I’d have to split my existing hives to give her the necessary troops.

(A queen and her attendants. Conjures up images of a royal bee in long gowns and pearls, surrounded by chambermaids and steamer trunks, doesn’t it?)

Wildly and unreasonably optimistic that both my hives would come through winter unscathed, I put two Buckfast queens on reserve for Scott to ship when they were mated and ready to go. The plan was to take two frames from each hive and start two new colonies with the Buckfast queens. I would take frames covered in nurse bees and filled with a nice mix of bee babies and honey, so the new colony would have bees and food to hold it over until the new queen could get going with the egg-laying.

Of course, right around the time the royalty shipped, Hive No. 2 hit the skids. We had noticed a dwindling number of bees coming and going, and had been fighting hive beetles, again. Once the weather warmed up enough to do a thorough inspection, we realized the hive was queenless, the beetles had staged a hostile takeover, and the hive was a goner.

Not wanting to take four frames from my one remaining hive, I resorted to begging for bee-filled frames from fellow local beekeepers on Facebook. Deb Klughers, the owner of Bonac Bees in East Hampton and a truly kind woman, commiserated and offered advice, but sadly didn’t have frames to spare.

I was arguing with myself the pros and cons of taking four frames from Hive No.1 a couple of days later when Deb texted. One of her hives had turned up queenless, and she needed a replacement. I checked with Scott, who said he could ship me another queen in a couple of weeks, after my sole remaining hive had recovered its numbers, so I sold Deb the surplus queen and everybody was happy.

Great plan, and Deb, God bless her, even helped me pick the right frames to pull for the new hive, and helped me find my queen. My biggest fear was that I’d move the queen over with the frames, since I have never seen the queen in any of my hives. It’s like a birth defect; I just can’t see her.

If I moved her and installed the Buckfast, the workers would definitely kill the new blood, and I’d be leaving my strong hive queenless. Under Deb’s direction, I was able to spot my queen, a very exciting moment. It was hard to keep an eye on her while doing a happy dance.

With the queen safely sequestered, Deb found two suitable frames to steal, we added two frames of drawn comb and made a nuc, sort of a mini-hive with just five frames, which I delivered to my friend’s yard that afternoon.

Meanwhile, my Buckfast queen lounged in her little plastic cage with her attendants, relaxing on a shelf in the closet, indulging in droplets of water and honey to keep up her strength. When Deb told me to keep the queen in the closet, I thought at first we were talking about something entirely different, and aren’t we past all that as a society? She explained that a warm, dark environment is exactly what her highness needs after a long trip.

The next day, having given the girls in the new hive 24 hours to realize they were without a queen, I took the queen cage and attached it to one of the frames of brood in the new hive. Exactly as I had been told to do by both Scott and Deb. I closed the hive back up and left them alone. In a couple of days, as the bees slowly ate their way through the candy frame keeping her highness in the queen cage, the hive would get used to the smell of the new queen’s pheremones and began to accept her. Once released, she would take a bow, thank all the little bees who made her success possible, and get to work laying over a thousand eggs a day.

In real life, I checked the hive five days later, expecting to find my new queen hard at work. Nothing. Okay, maybe she was a slow starter, and it didn’t bother me that I didn’t see her because, as I said, that’s normal for me. But two days later when I checked again, it was clear the queen had vamoosed, or been evicted. The peasants had taken matters into their own hands and were making a queen from one of the eggs I moved them over with.

I admire their initiative, but could they not have just accepted the lovely queen I brought them? Now we’re looking at eight days more until she hatches, then she needs to go out and find a few good drones before she can come home and start laying. And with my track record, it will be a pure miracle if a robin doesn’t snatch her out of the air for a quick snack while she’s out and about. So today I’m giving the hive another frame of brood from Hive No. 1, which is making babies and bringing in nectar and pollen like crazy. That way they’ll be sure to have enough bees to keep going until her highness is all set. And I’ll check back on them in a few more days and see what’s up, and we’ll go from there.

Then in another week or so, I’ll start all over again with a new Buckfast queen from Scott. And maybe this time it will work. Maybe I should try something different. Maybe what we need is corgis; tiny little corgis to keep the queen company. Hmm …

Note: Just to sharpen the pain of my failure, Deb’s Buckfast is “laying like a queen,” she says. Sigh.

You know how sometimes the universe has to repeatedly hit you over the head with ... 5 Jul 2017 by My27east
Sign in to comment