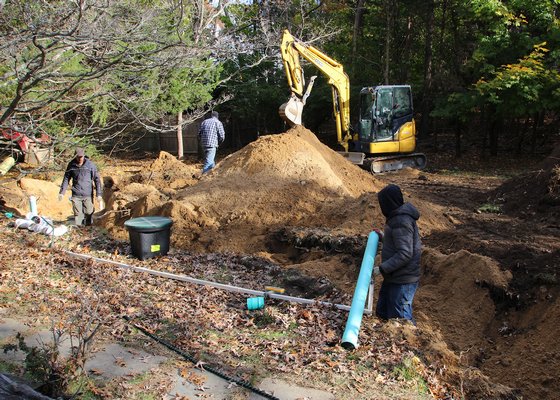 As the fallout from an IRS ruling regarding septic upgrade rebate grants — and who gets a costly income tax bill — remains unclear, the two South Fork towns are in much different positions.

The IRS ruled in a letter made public earlier this month that both the homeowner who applied for a grant and the installer who is paid to do the work are responsible to pay taxes on Suffolk County’s septic system rebate grants — regardless of whether the county cuts a check to the homeowner or pays the installer directly.

Both Southampton Town and East Hampton Town have their own septic rebate programs to encourage homeowners to replace their cesspools and aging septic systems with “innovative/alternative” wastewater systems, which reduce the amount of nitrogen reaching bays and ponds. The towns’ grants, funded with Community Preservation Fund water quality protection money, may now be subject to the same IRS determination.

The concern is that homeowners will be less likely to take advantage of grants to continue the mission to improve water quality in the county if they are subject to paying thousands of dollars in federal income tax on the value of the grants.

Suffolk County, with help from state funds, offers grants of up to $30,000 per qualified homeowner. Southampton and East Hampton both offer up to $20,000.

East Hampton changed its practices at the beginning of the year to pay the installers directly; however, in anticipation of the IRS’s decision, the East Hampton Town Division of Finance already instituted a practice of sending a 1099 to both the homeowner and the installer.

Southampton Town Comptroller Leonard Marchese said last week that the IRS ruling may not apply to the Southampton Town’s septic rebate program, because it operates differently from the county program. “We have income restrictions on our grant program,” he noted, and one of the “key points” in the ruling letter concerned income eligibility and the “general welfare exclusion.”

“Our current program is structured so that if you make more than a certain amount of money, you don’t qualify,” he said. “So we’re not exactly sure at this point that we’re covered under this opinion.”

“At this point, we’re still looking into it and researching it, but our program isn’t exactly like the county program,” Mr. Marchese said. “That’s not to say that we might not modify our program to make it clearer in regard to the issuance of 1099s and whatnot.”

The current income limits are probably too high, he said, but he added that the town is still in conversation with consultants and elected officials.

“We have to look into it a little bit further,” Mr. Marchese said. “This is my first blush.”

Len Bernard, the East Hampton Town budget officer, said that he and his office’s chief auditor, Charlene Kagel-Betts, expected that the IRS would rule the way it did. Since the start of the year, his office has been acting in accordance with their expectation.

He noted that he worked for the U.S. Government Accountability Office auditing the IRS, and Ms. Kagel-Betts is a certified public accountant and a former IRS examiner.

“I was at GAO and I evaluated the IRS information return program back in the ’80s,” he said. “My office was actually in the IRS building for seven years, so I kind of knew where they were going to go with this.”

The IRS private ruling letter came at the request of Suffolk County Comptroller John Kennedy, a Republican, who was under fire last spring for his decision to send homeowners 1099s even after the septic rebate program was retooled to avoid just that.

County officials working under Suffolk County Executive Steve Bellone, a Democrat, suggested that Mr. Kennedy’s decision to send 1099s to homeowners was politically motivated to undermine the rebate program that Mr. Bellone had championed. Mr. Kennedy was challenging Mr. Bellone for the supervisor’s post in 2019, though Mr. Bellone won reelection.

Deputy County Executive Peter Scully, who serves as Mr. Bellone’s water czar, has noted that similar rebate programs exist in Maryland and in upstate New York, and homeowners there do not receive 1099s when the vendors are being paid directly.