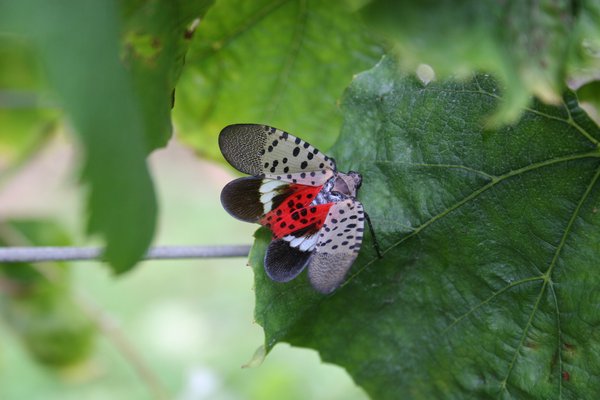 Vineyards have good reason to fear the Spotted Lanternfly as grape leaves, like the one pictured, seem to be one of their favorite feeding sites. COURTESY TIM WEIGLE/CORNELL UNIVERSITY 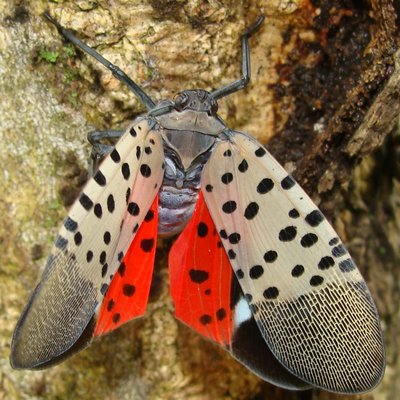 An adult spotted lanternfly in full color. If an SLF is spotted in our area later in the summer, this is probably how it will look. ERIC DAY, VIRGINIA TECH 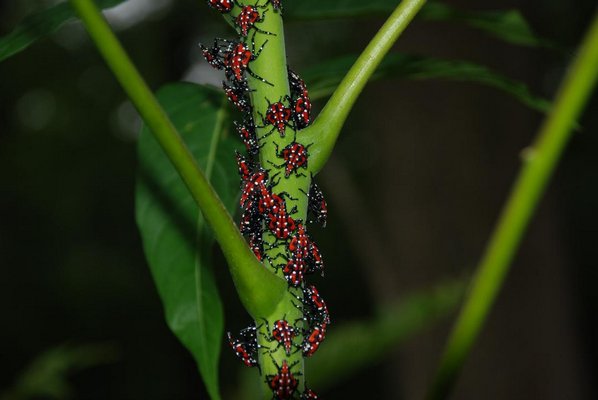 These SLFs are in their fourth stage of growth, or fourth instar. This stage would emerge before they morph into adults. ERIC DAY, VIRGINIA TECH 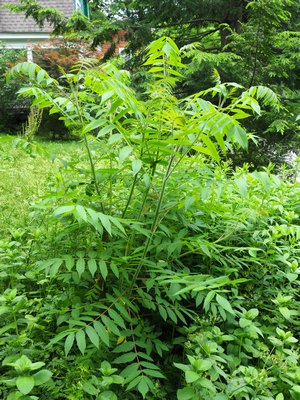 Ailanthis altissima, or the Tree of Heaven, is a favorite feeding site for the SLF. Removing this invasive and weedy tree from vacant lots and landscapes can help control the spotted lanternfly. ANDREW MESSINGER OLYMPUS DIGITAL CAMERA

This is an adult SLF laying eggs. This stage occurs from September onwards possibly into October. The fresh egg mass is white then turns to a buff color. COURTESY TIM WEIGLE/CORNELL UNIVERSITY

An adult spotted lanternfly is about three quarters of an inch long and about an inch and a half wing tip to wing tip. If they occur in the East End this stage would probably appear from early July onward. COURTESY TIM WEIGLE/CORNELL UNIVERSITY

For a few years there has been a drumbeat in the horticultural community about yet another new invasive species. This one has the potential to seriously damage commercial fruit crops, agricultural crops including hops, and many of our garden and landscape plants. It looks like a moth though its called a fly. But in reality, technically it’s neither. The spotted lanternfly (SLF) is literally at our doorstep, but as a gardener you have an opportunity to be a citizen scientist and take a major role in at least controlling and isolating the SLF.

When I saw my first SLF adult I was struck by its beauty. The adult is about an inch long and a half inch wide and, when resting, its wings are strikingly colorful. The front (fore) wings are gray with black spots, and the wing tips have reticulated black blocks outlined in gray. The hind (rear) wings have contrasting patches of red and black with a white band while its abdomen is yellow with broad black bands. Even in its immature stages, the SLF can be striking with its black and white spots with red spots added as they grow.

In this country, the SLF was first discovered in Pennsylvania in September 2014, and by early this year it had been found in Delaware, Maryland, Massachusetts, Connecticut, New Jersey, Virginia and in several counties in New York including Suffolk, where it was found late last year. However, it didn’t fly here. In all likelihood, it was unwittingly brought into our area on a shipment of nursery products from Pennsylvania. In Massachusetts, a dead adult SLF was found in a private home near Boston where it was presumed to have come as part of a shipment of poinsettia plants from Pennsylvania.

Part of the problem with the dissemination of this insect is how it moves around. You might think that since it’s an insect it would fly from place to place and that’s how it would spread. But it’s not a great flyer. On the other hand, it’s a great hitchhiker. It’s been found in the wheel wells and hubcaps of trucks and stealthily hidden in shipments of nursery stock­­—even stock that had been inspected prior to shipment and on route. Which brings up the question: How did it get to this country anyway?

The SLF is native to several areas of northern Asia. When insect detectives did some backtracking, they found that the first SLFs to arrive here probably came as eggs or immatures that were attached to ornamental stones shipped from Asia to the United States and presumably offloaded on the East Coast. Who’d have ever thought an insect would invade us from rocks? But then who would have thought it would be found on hubcaps?

Ok, so it’s here, it’s spreading. So what’s the big deal? The big deal is that while the SLF doesn’t directly kill plants by boring into them, spreading diseases or defoliation, it is what we call a “swarming” insect. And being a nonnative, so far it has no natural enemies. It gathers in such large numbers that it simply overwhelms plants as they swarm, weakens them and they eventually succumb from the stress. In these large swarms, the SLF does a great deal of feeding. And since it’s dining on plant sugars, it excretes copious amounts of honeydew. A mold grows on this sugary excretion creating sooty black mold, and that cuts down on a plant’s ability to conduct photosynthesis. More stress.

Commercially, it has the potential to damage orchard trees like apples and peaches, vineyard crops like grapes, maple trees that we get our maple syrup from and hop vines that we use for brewing. In the home garden and landscape, the list grows much larger as does the threat to Long Island’s ornamental nursery industry.

So, what can you do? Plenty. Become familiar with what the SLF looks like in its various stages of development. Know where to look for it and when. Also know who to contact when and if you find one of them, as early identification regarding the stage of growth, location and what they are feeding on can be critical in getting control. Also know who to call when you think you’ve found this insect, even if it’s only one and even if it’s dead.

There is also something critical you can do to help right now. One of the primary hosts, or favorite plants to feed on is The Tree of Heaven, Ailanthes altissima, also an invasive species, which grows as a rampant invasive tree all through our area. And yes, this is also the famed Tree that Grows in Brooklyn made famous in the 1943 novel by Betty Smith. I even remember seeing this tree growing in a subway tunnel where it got sunlight from a sidewalk grate tens of feet above. Eliminate this weedy tree and you take away a primary source of food and attraction for this insect.

Other steps you can take is not to bring plant material back from areas (especially Pennsylvania) known to have SLF populations and never move firewood, not even a few pieces, from these areas.

You can get much more information by going to the Cornell Integrated Pest Management website noted at the end of this paragraph. There is a video you can watch at the top of the opening page, and to the right there are numerous articles and videos about the SLF as well as important information on how to report finding one. The colorful adults begin to show up in this area in July but if this insect is present on the East End you should be familiar with all the stages of growth so you can report sightings early in the season before a new generation begins. Visit Cornell IPM: https://bit.ly/2Zr55EB.

Here’s your chance to get involved in your backyard and regionally. If you and your neighbors start to “weed out” the local Tree of Heaven (or is it hell?) that can be a very important step. But also learn to ID the SLF so it can be tracked and the infestations managed. Let’s hope the governmental agencies do a better job than they did when the southern pine beetle hit Long Island. Now is the time for Hampton gardeners, garden clubs and the Horticultural Alliance of the Hamptons to play their part. Keep growing.

With the effects of climate change, it seems to get harder and harder each year ... 31 Oct 2019 by My27east