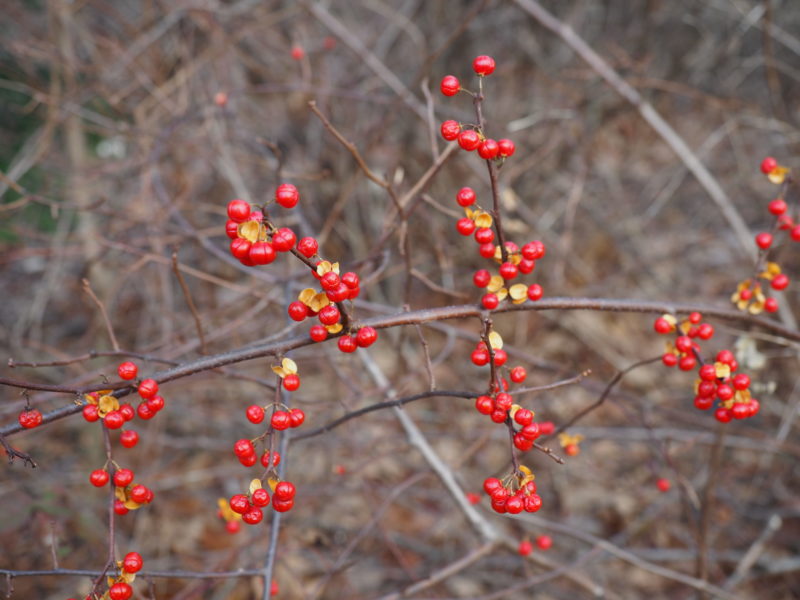 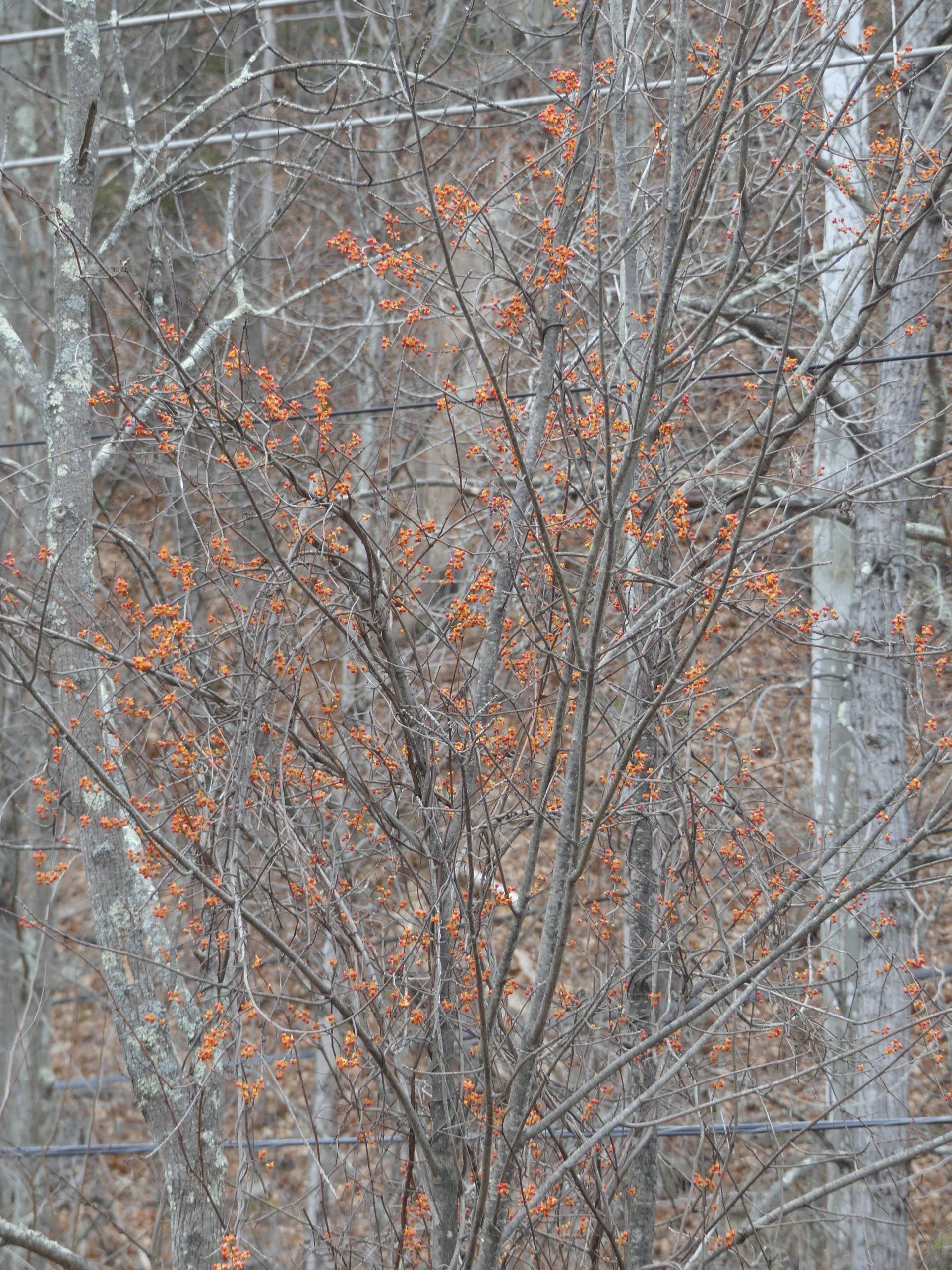 This tree appears to have small orange fruits or berries on it. However, these are not growing on the tree itself but on the Oriental bittersweet vine that is strangling it. 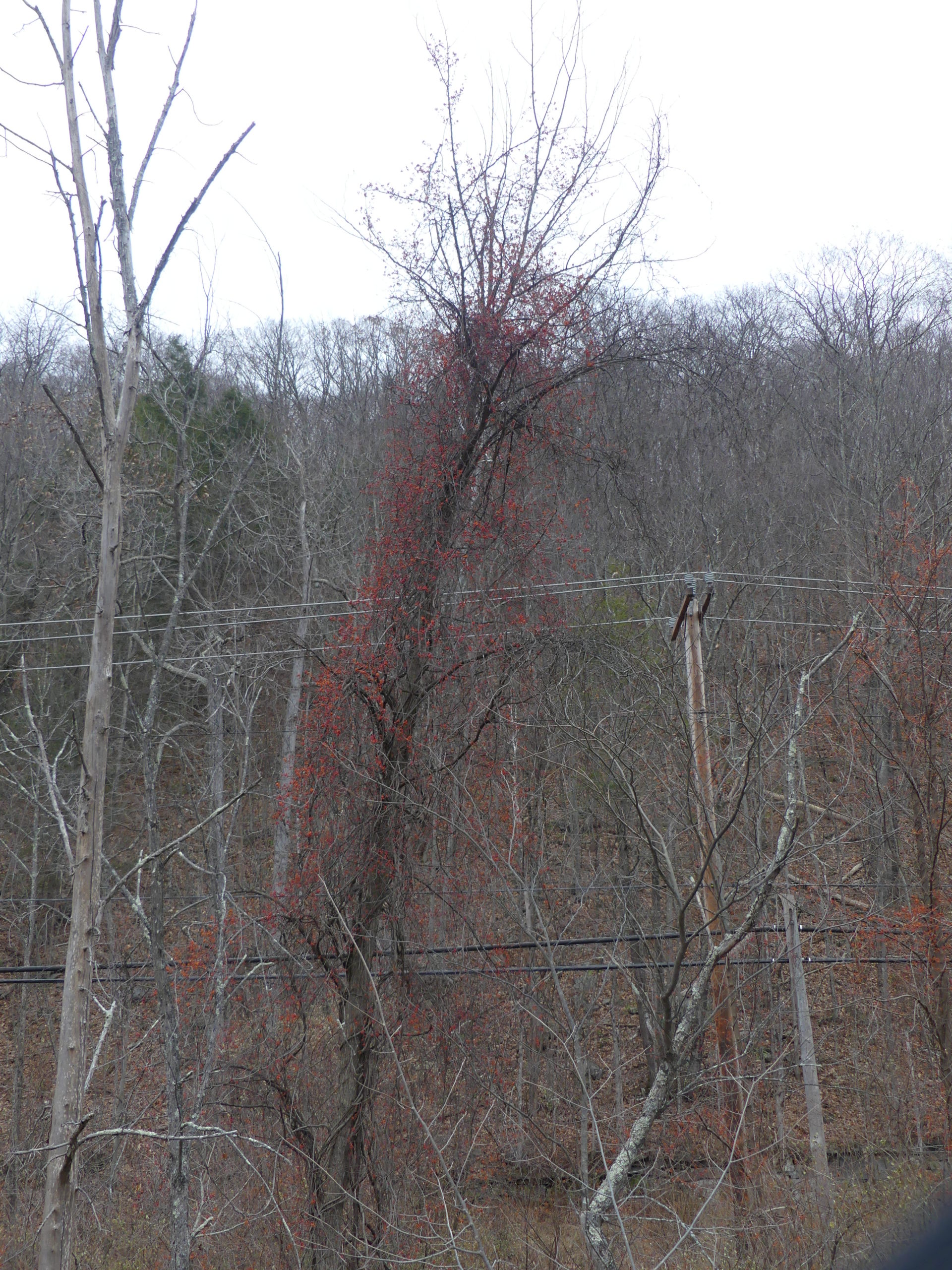 Oriental, or Asian, bittersweet vine has climbed up this tree trunk, which it has now completely covered. The tree is already starting to lean due to the force of the vines pulling it down, and it’s only a matter of a year or so before the tree is toppled and killed. ANDREW MESSINGER 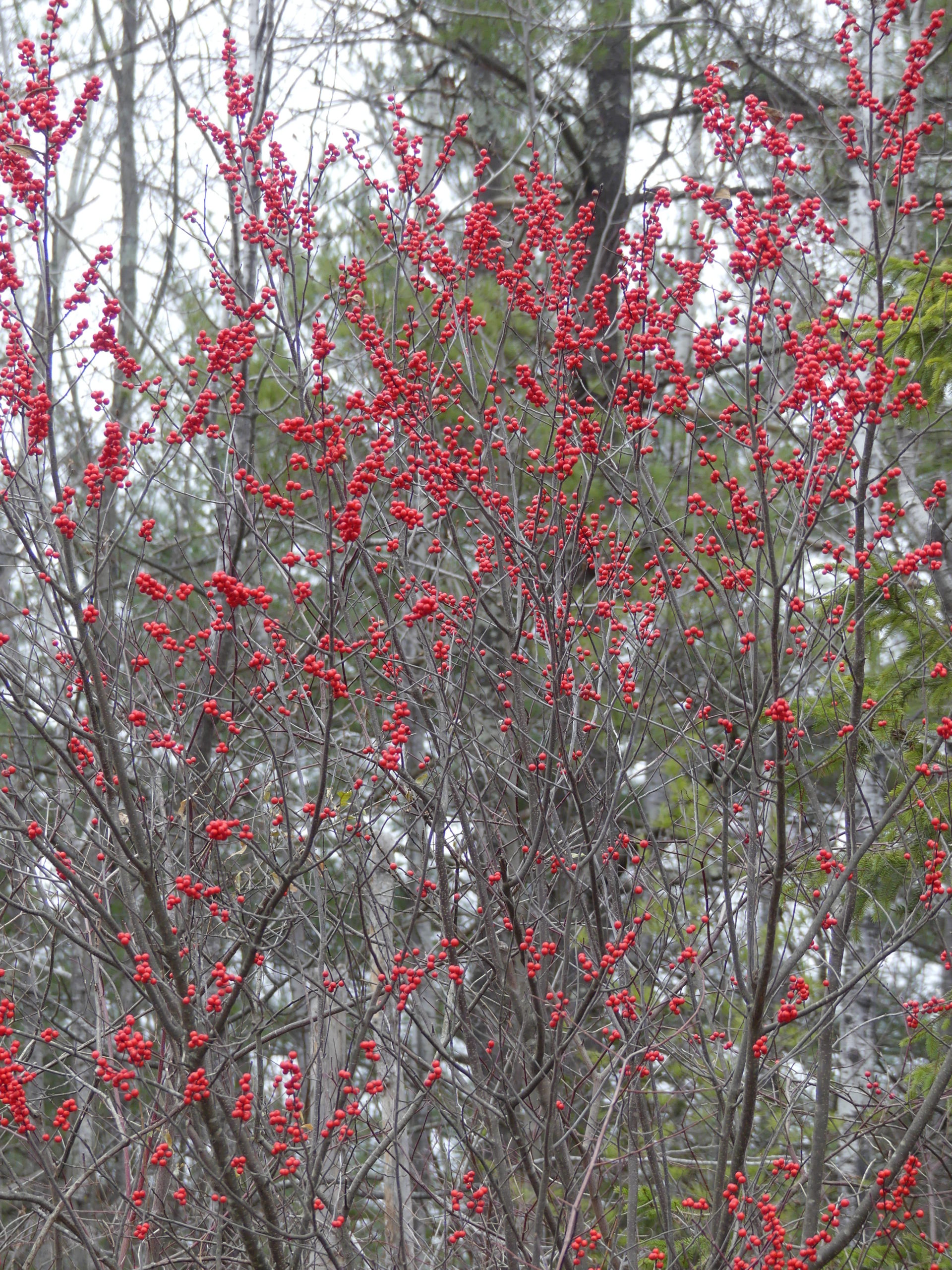 The native Ilex verticillata, or common winterberry, can be confused with the bittersweet, but the winterberry’s fruits are a bright red and born on stems, not vines. This shrub or small tree can grow up to 14 feet tall. The winterberry prefers wet soils while the bittersweet isn’t that choosy. Both live at the edge of the woods. 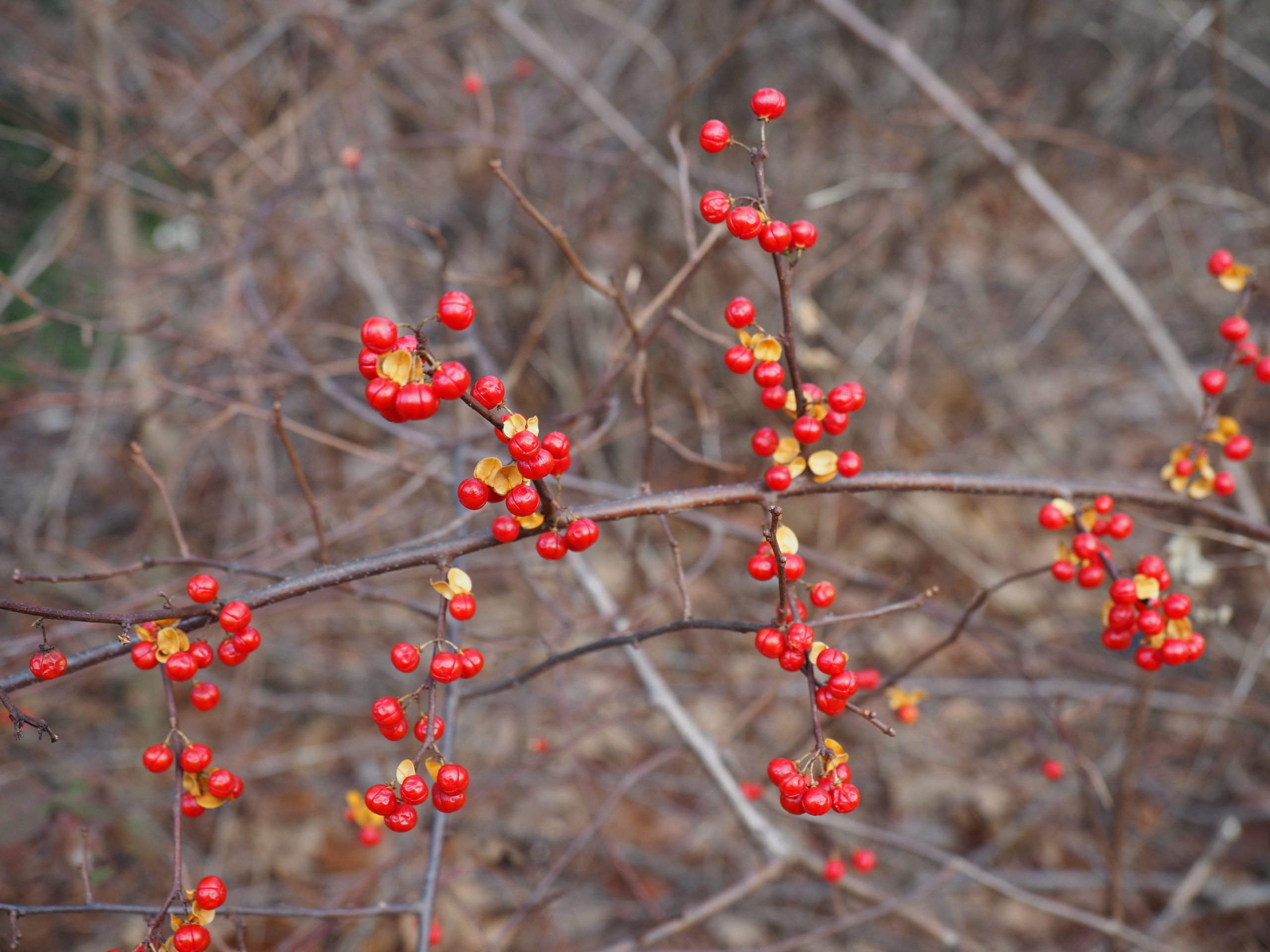 Other than the long, woody vine, one clear way to know you have bittersweet is that the fruits have a calyx, or papery sheath, that opens as the berry ripens. Winterberry does not have this feature. ANDREW MESSINGER 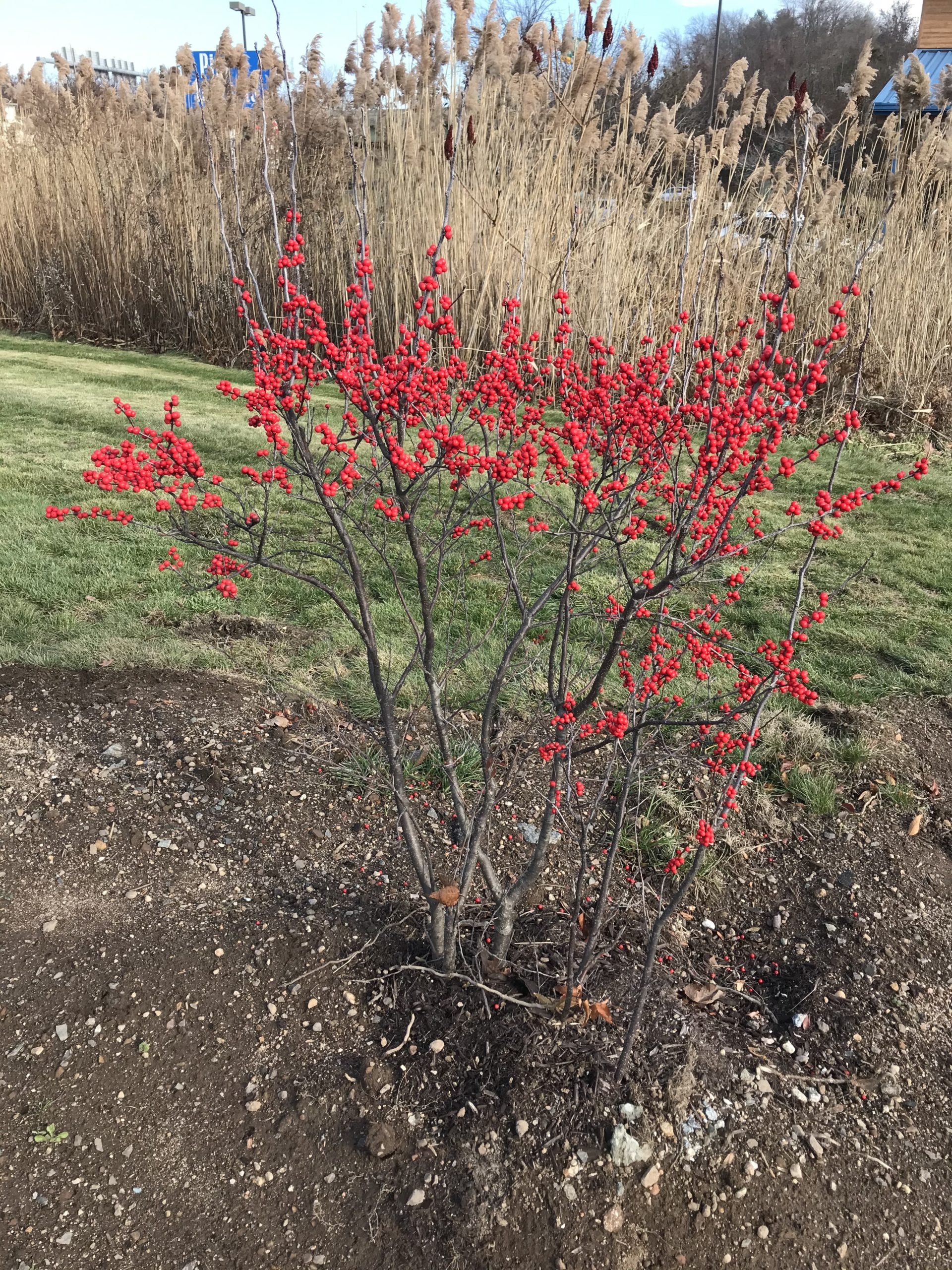 There are a number of cultivated winterberry shrubs available at garden centers and they’re great for off-season color in the landscape. But this one, planted at the periphery of a strip mall, seems to have been abandoned and neglected. ANDREW MESSINGER 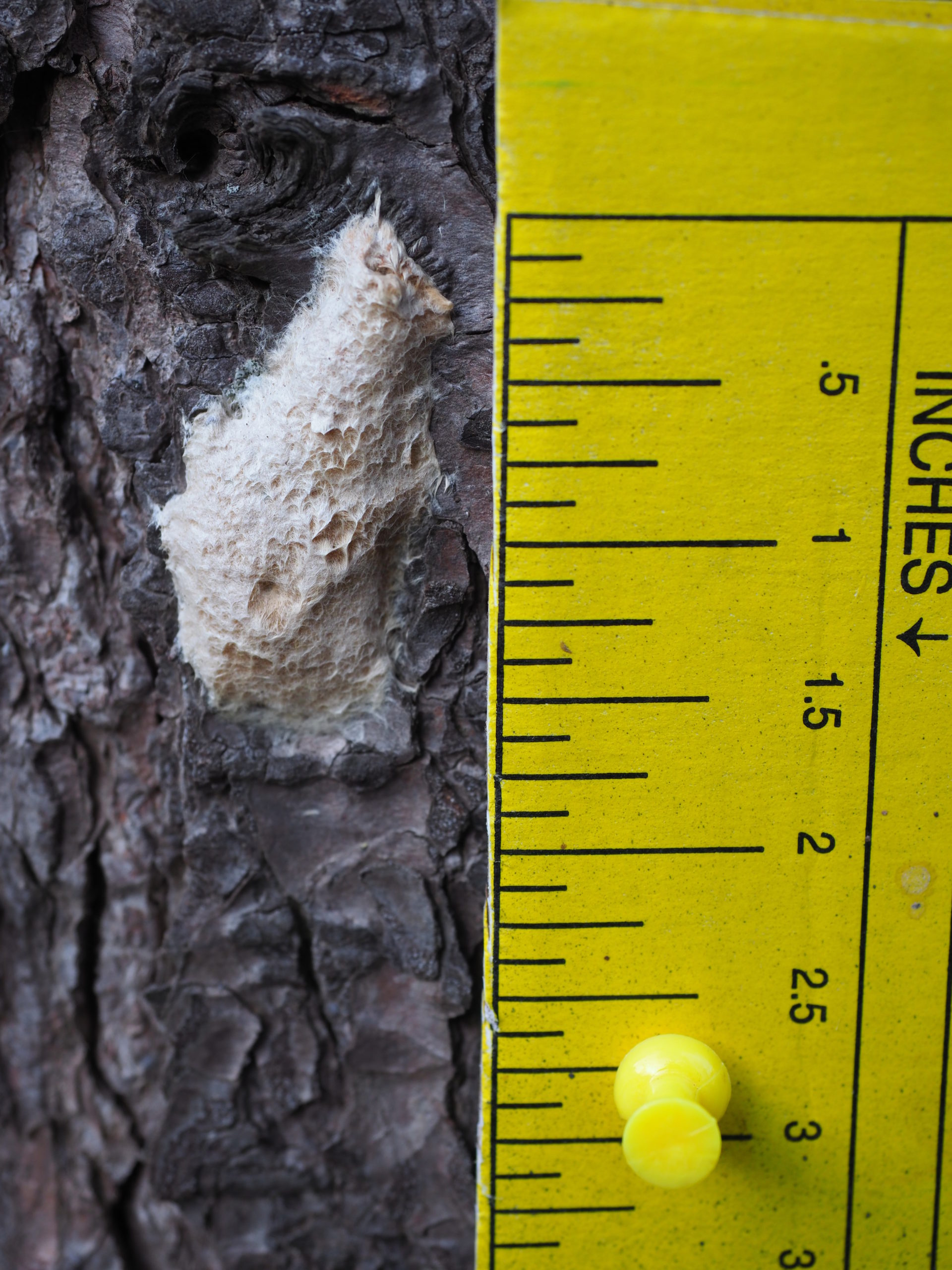 Observed from only a few inches, the gypsy moth egg mass is a buff- or straw-colored feature on tree bark that has the look and consistency of insulation spray foam. Just under 2 inches long and a half inch wide, these egg masses should be scraped off the tree and into a container of soapy water during the winter months. ANDREW MESSINGER 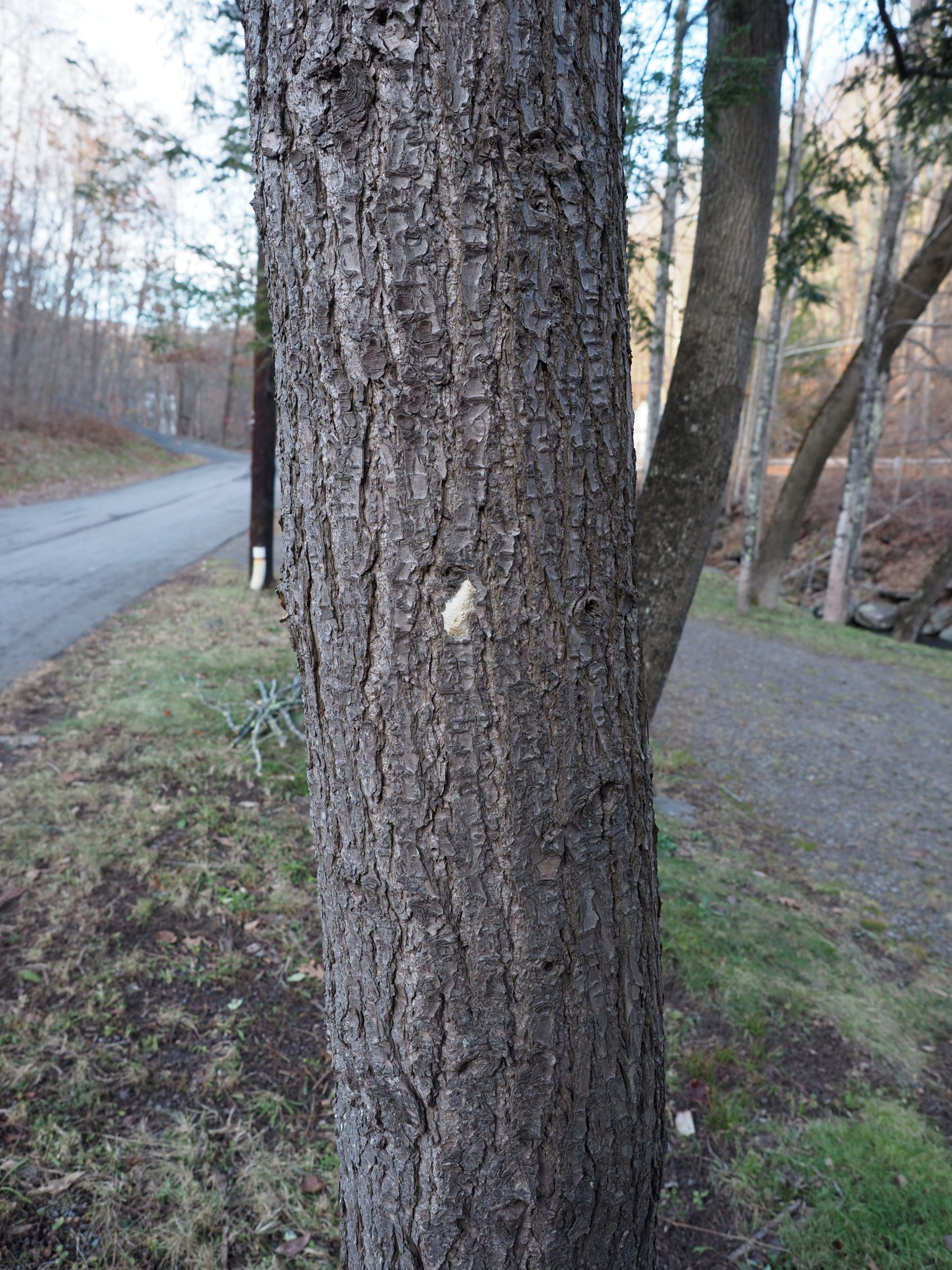 From a distance of only 5 feet, the gypsy moth egg mass (dead center on the hemlock truck) could be easily overlooked by most home and property owners. ANDREW MESSINGER

The weather seems to be on track if you subscribe to the long-range forecast for this winter (cold and wet). So garden procrastinators beware, it’s time to make your winter preparations and do some invasive plant scouting. So, before the ground freezes and before the snow falls, time for some December considerations and a ramble.

One of our most insidious invasive weed species is the Oriental bittersweet, or to be politically and socially correct, the Asian bittersweet. This plant starts out as an innocuous vine in its first year of growth getting only 3 to 5 feet tall, but it doesn’t die back to the ground. The viney stem turns woody, and if you don’t keep it in check, it will climb and take down huge trees in a matter of years. It has the potential to destroy wooded areas. As it topples trees at the sunny woods’ periphery, the woods get reduced, the vines sprout deeper and deeper into the wooded area, and in a generation or less, the woods and forest are bent, toppled and distorted. But this can happen in shrubland as well.

The vines’ seeds mature in late summer and into the fall as they turn a dull orange or a yellow-orange, making the covered trees and shrubs appear to be fruiting. Birds and few animals feed on the seeds, and holiday decorators have been seen along Montauk and Sunrise highways taking cuttings of the vines with berries intact. This practice simply exacerbates the problem by moving the seeds to areas where the plants may not have existed once the decorations are discarded.

But now is a good time to grab your pruner, cut the vines and bag the berries. It’s probably one of the most important environmentally helpful things you can do on a local level, and I wish more garden clubs and horticultural organizations, Scouts and community groups would organize programs to tame this vine.

For your part, simply grab a pruner or lopper, go out into your yard and search out the vine. At this time of the year the emphasis is to find the vines with fruits (or berries) and get those parts of the vines cut and bagged then into the trash, not the compost pile. Yes, you can and should be cutting any and all of these vines and doing this on a regular basis, but now the emphasis is on reducing the seed bank to minimize new plant production.

If you want to take this a step further, use tagging paint or tagging tape to identify the vine stubs (about 6 to 8 inches left behind). In the spring, when the vines begin to emerge from dormancy, the tip of the stub should be cut to expose live tissue then the wound painted with a highly concentrated form of glyphosate — yes, Roundup.

Buy as small a container of glyphosate as you can find, and it should have an “active ingredient” listing of 30 to 50 percent, the higher the better for this use. If you need more information, drop me a line. I won’t get into the Roundup controversy now; that will be a column for next year. Using disposable, impervious gloves and a small paintbrush or eyedropper, the product is painted or daubed on the wound where it is translocated down the stem into the roots. A second application should be made several weeks later. In most cases, this will kill the vine without having to pull it out. Pulling the vine from the ground can often result in dormant seeds near the vine getting exposed to light and moisture allowing them to germinate and defeating the whole exercise

Now, one note of caution. There is a shrub that has a berry that can be confused with the bittersweet fruit. Ilex verticillate, more commonly known as winterberry, has fruits of about the same size as the bittersweet, but they are unmistakably red and, at this time of the year, bright red. They are one of the most magnificent shrubs and small trees in the fall and early winter landscape because of these colorful fruits. You can see pictures on this page https://bit.ly/2qSH6CJ under “Ilex.” Know what this plant looks like and know what the fruits look like because it does grow wild out here in wet or swampy areas and there are a number of cultivars that are grown as ornamentals with fruit color variations. I’ve even seen one whose fruits are more orange than red, but most are a bright red. Unlike the bittersweet, this Ilex is a wonderful plant to use on the East End.

I should also note that there is a variety of bittersweet that isn’t invasive and produces the same orange fruit as the Oriental/Asian variety. This is the native American bittersweet, Celastrus scandens, and you can plant it without the fear of it becoming invasive.

Another invasive you can look for now through late winter is the Gypsy moth. No, not the moth, but the egg masses of the moth that were laid in late summer. The egg masses occur as buff-colored spots about 2 inches long and a half-inch wide on the trunks of certain trees. The moths lay their egg masses on oaks, their favorite tree to feed on when the oak leaves emerge, but the one I found in early November was on a hemlock. According to a state forester I spoke with, it turns out that hemlocks may be the GM caterpillar’s second favorite tree to munch. So, it made sense to find an egg mass on a hemlock trunk about 5 feet off the ground.

Even if you haven’t had issues with the GM, this is still one of the invasives that you should be scouting for on your property. It has done incredible damage on the East End when the population of caterpillars explodes. One viable egg mass can result in hundreds of caterpillars emerging next year and hundreds of caterpillars will turn into hundreds of moths that will once again lay eggs and, with favorable environmental conditions (dry late spring and early summer), expand their territory and subsequent destruction. Egg masses can simply be scraped off the trunk of any tree into a container of soapy water.

An “ah ha” moment for the Hampton Gardener: I have a south-facing window where I grow most of my houseplants. In the fall, as the angle of the sun changes, they respond to the reduced light from the lower sun angle and leaves on the trees. The plants perceptibly slow down and require significantly less water. But then, just weeks later, they seem to come back to life. The answer goes back to my columns on how and where you plant trees around your property.

After a very cold fall night, the ginkgo and oak, which are about 25 feet from the second-floor dining room window and shade that part of the building, dropped all their leaves in just a day. Suddenly the fall-darkened window became bright and sunny, and in an instant my houseplants seemed to respond and become a darker green and be somewhat rejuvenated. So, what you plant outside can have unintended results inside. You live and learn. And, you keep growing.