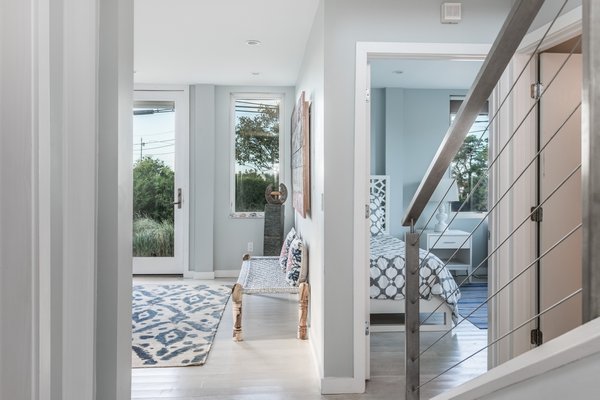 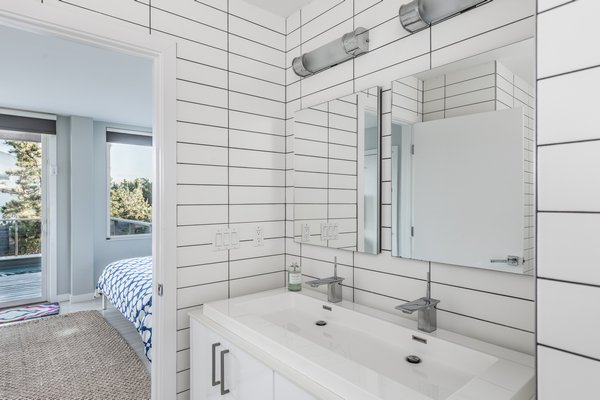 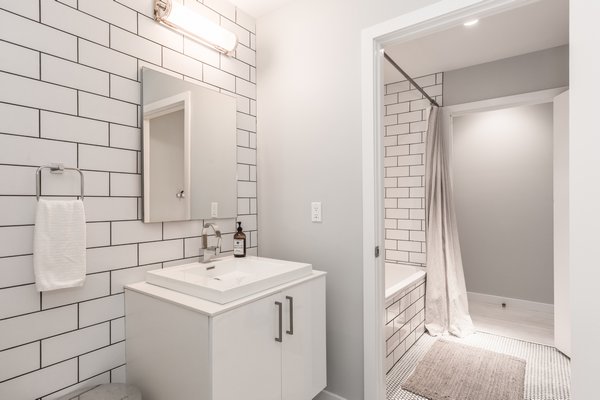 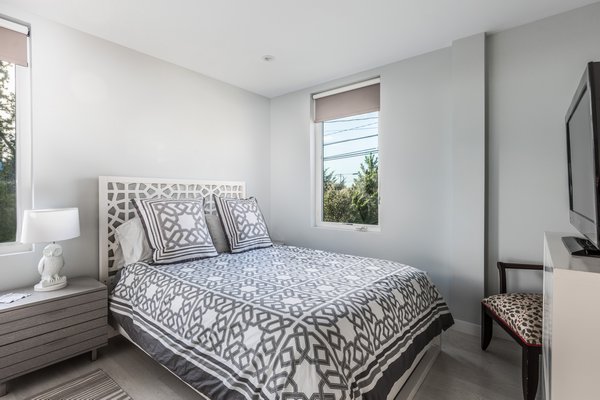 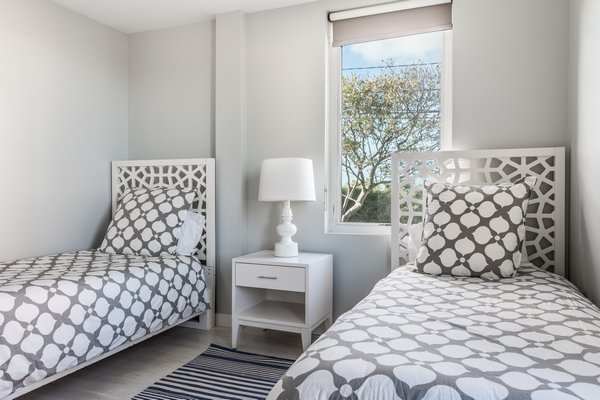 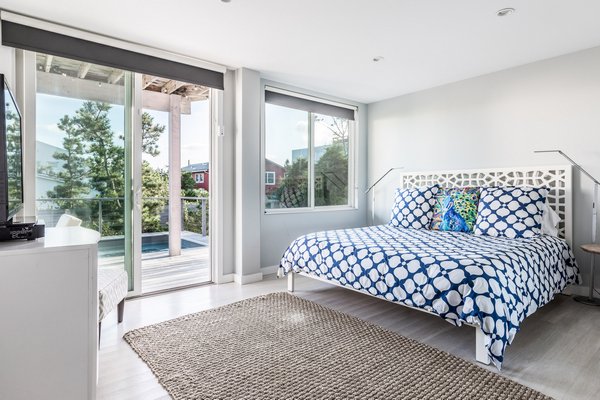 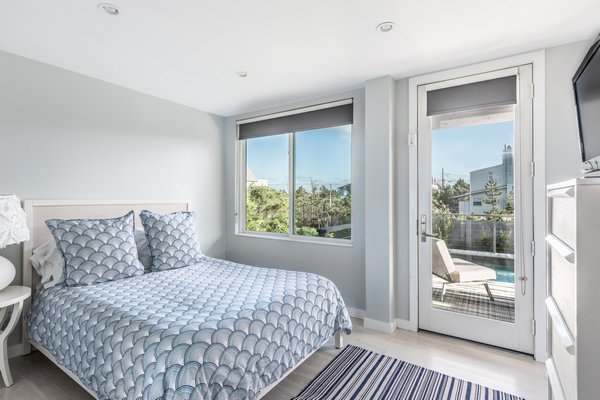 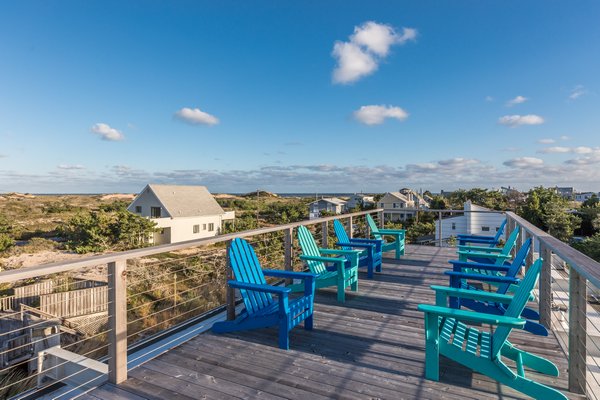 The new deck on the roof of Beach Box. LENA YAREMENKO 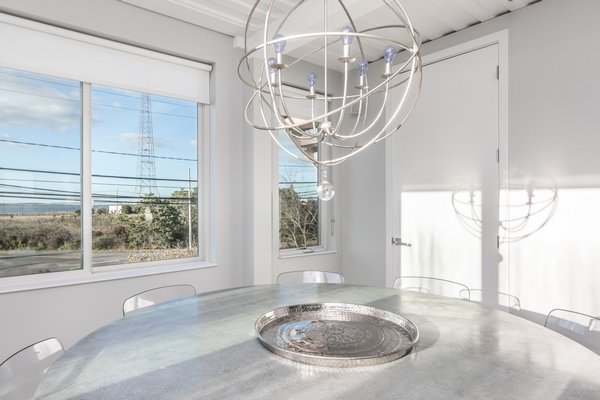 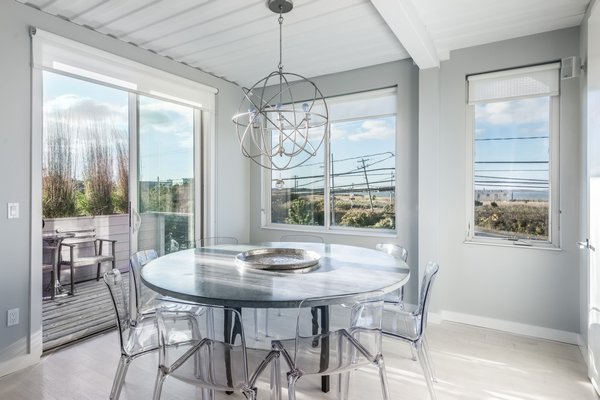 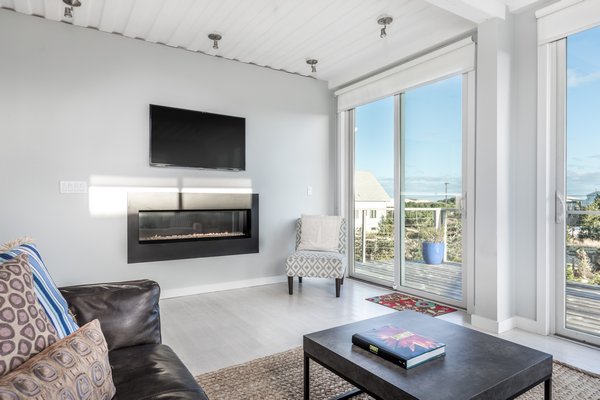 A touch of summer in a fireplace. MARSHALL WATSON 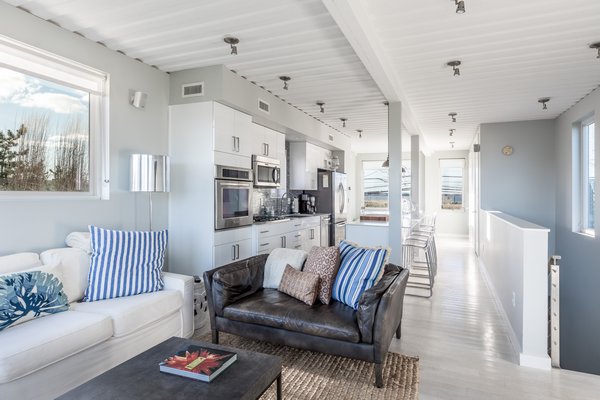 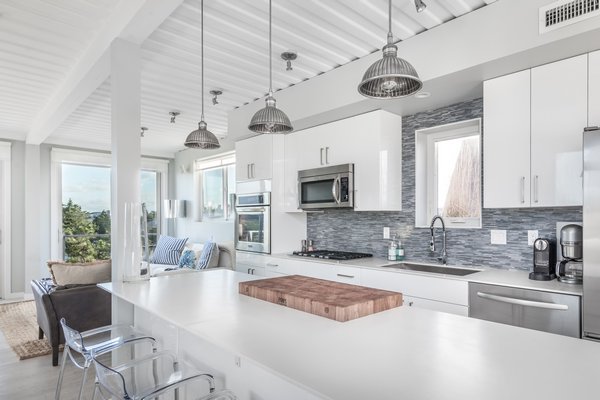 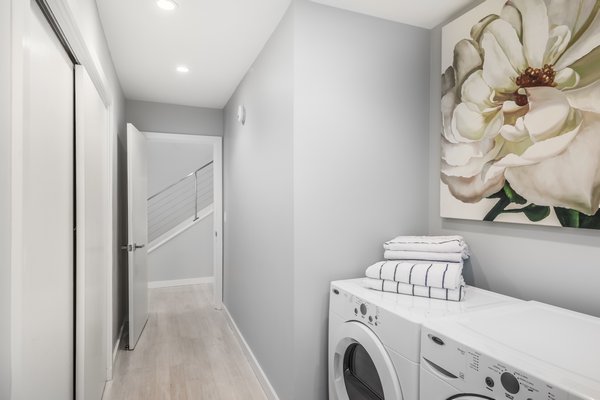 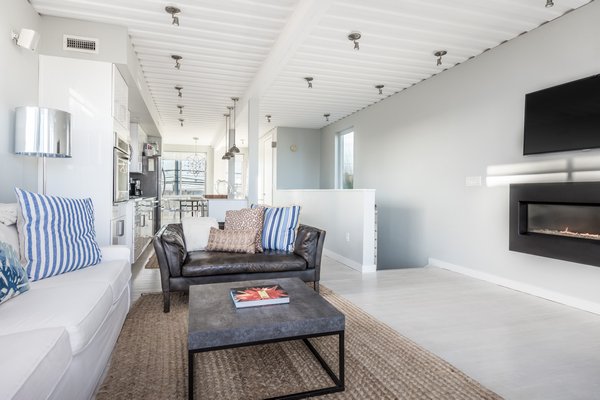 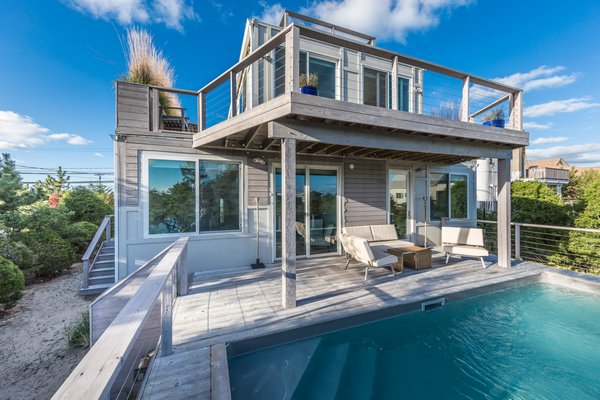 The David Kleinberg garden has a tree as a focal point surrounded by grasses and the meadow beyond. ANNE SURCHIN 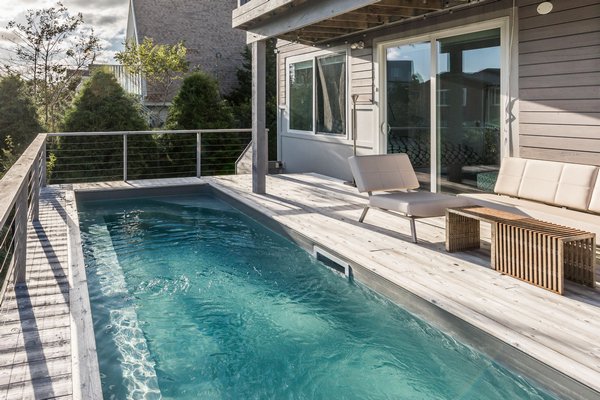 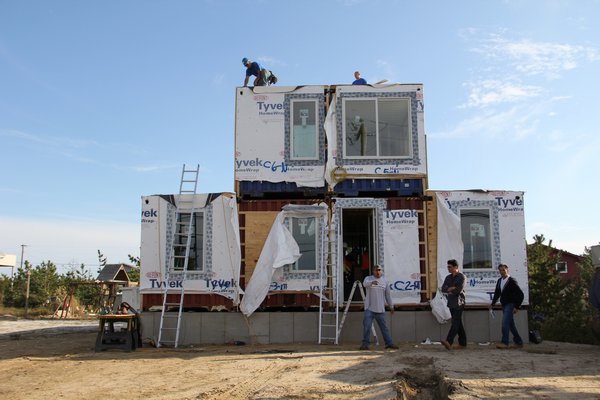 The Beach Box is assembled in 2011. COURTESY CHRISTIE ANDERSON 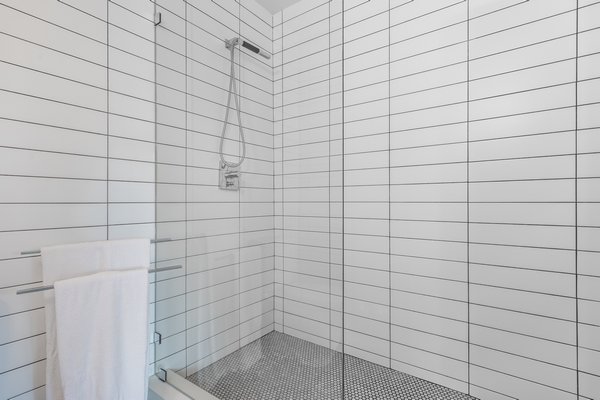 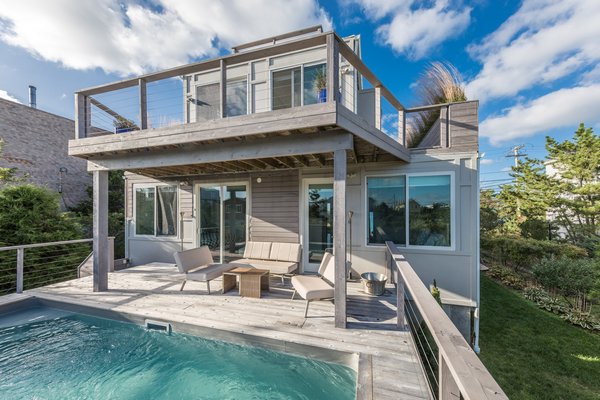 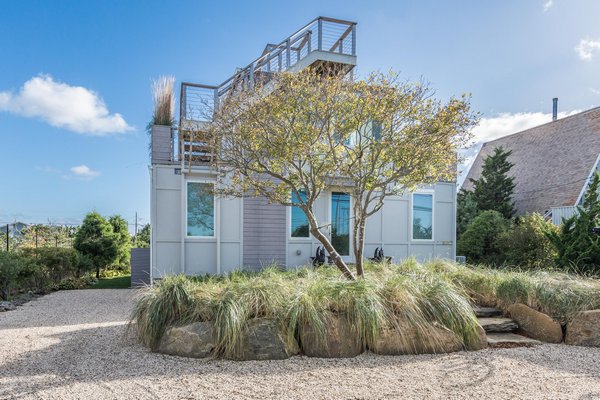 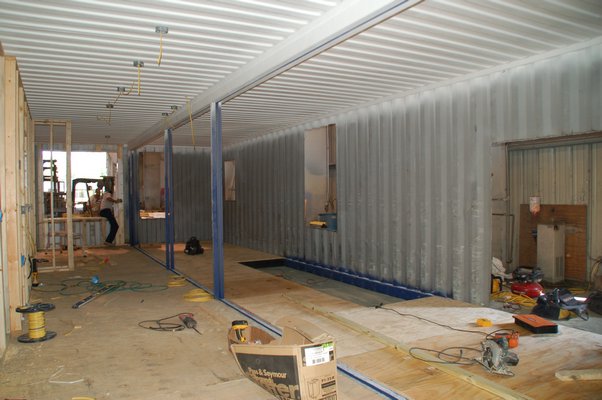 At the time it was built, it was novel. Seven years later, it’s still an East End oddity—even though it doesn’t appear all that peculiar at first glance.

Located on the Napeague Stretch in Amagansett along Montauk Highway, the Beach Box is a beach house like any other, except this summer retreat is constructed from six used shipping containers.

The nearly 2,000-square-foot residence built in 2011 sits on 0.17 acre and has four bedrooms, two full bathrooms and one half-bath. There is also a custom chef’s kitchen and white oak floors. Outside are 1,300 square feet of decking and a heated pool, plus a new roof deck. The siding is cypress and the decking is cedar—all certified sustainable materials.

Douglas Elliman real estate broker Andrew Anderson developed Beach Box, with ambitions that it would be the first of six to be built on the South Fork in a two-year period. However, the first Beach Box is still the only one.

Mr. Anderson explained on Friday that after Beach Box he moved on to a much higher end construction model that shipping containers were not suited for. Now the East Hampton-based firm that he’s a part of, MAP Development, builds spec houses in the $4 million to $7 million range.

“There are some constraints with container construction that would have become cost prohibitive for me to accomplish what I need to, to sell at that price point,” Mr. Anderson said. “If I were to build something in the Beach Boxes price category again, I would certainly revisit the use of containers for a project like that.”

To construct Beach Box, MAP Development partnered with SG Blocks of Brooklyn Heights, which makes everything from retail locations and Starbucks cafés to military barracks out of retired steel shipping containers that otherwise would have been melted down.

“The more you start to manipulate the boxes, the less cost effective it is, and you also start losing the sustainability,” Mr. Anderson said.

Because the boxes are manipulated to accommodate windows, doors, stairs and more before they are delivered to the building site, they can be assembled in just one day, which was the case with Beach Box.

Mr. Anderson attributed the gap between the original asking price and the final sale price to the fact that Beach Box is located right on the heavily trafficked Montauk Highway. “It was harder to overcome than we had anticipated,” he said.

The purchaser was officially listed as Casa Di Bianco Sabio, a limited liability company. The name is Italian, and it translates to “House of White Sand.”

The man behind the LLC was William White, the president and CEO of broadcast promotions agency Firefly Creative Entertainment Group. Mr. White candidly explained Friday that he chose the Italian name to give the property “some cache” and to identify it as something other than a “shipping container house.”

“You would never know, unless someone told you,” Mr. White said of Beach Box’s unconventional building materials. “The only thing that’s exposed, as far as the shipping container, is an accent wall in the downstairs foyer—and it’s just more for architectural design effects—and then also the ceiling of the top floor has the shipping container exposed. Other than that, you would never know.”

When he reveals his beach house is made out of shipping containers, it raises eyebrows.

“My friends in Connecticut, they’re a little poshy, and they keep going, ‘Don’t you live in a dumpster?” Mr. White said.

“They are just kind of kidding around, but still, people in their minds, they have no idea what a shipping container house is, and they still think it’s probably flimsy, or to them it’s just a step above a tin shed with a garden,” Mr. White said.

The reality is quite different.

“It’s pretty grand and it’s wide open space, especially having it being reversed, with the bedrooms downstairs and the main living upstairs.”

And because of all the windows, the views are spectacular, he added.

Deciding to take further advantage of the views—the Atlantic Ocean less than 1,000 feet to the south and Napeague Harbor an even shorter distance to the north—Mr. White added a rooftop deck to Beach Box this past May.

“It’s spectacular, not only sunrises, but sunsets,” he said.

He said that as much as he enjoys Beach Box, he had gotten little use of out it of late because now his career requires him to spend more time in Los Angeles—his company produces promos for FX shows such as “American Horror Story” and “The Assassination of Gianni Versace: American Crime Story” and he is developing a feature film.

He said that what attracted him to Beach Box in the first place is that “it is a quintessential beach house,” just a quick walk to the ocean and the Lobster Roll.

“When you go to the Hamptons, you think beach, not country cottage in the middle of a farm,” Mr. White said.

Homeowners in Suffolk County who received septic improvement grants have had to pay thousands of ... by Brendan J. O’Reilly