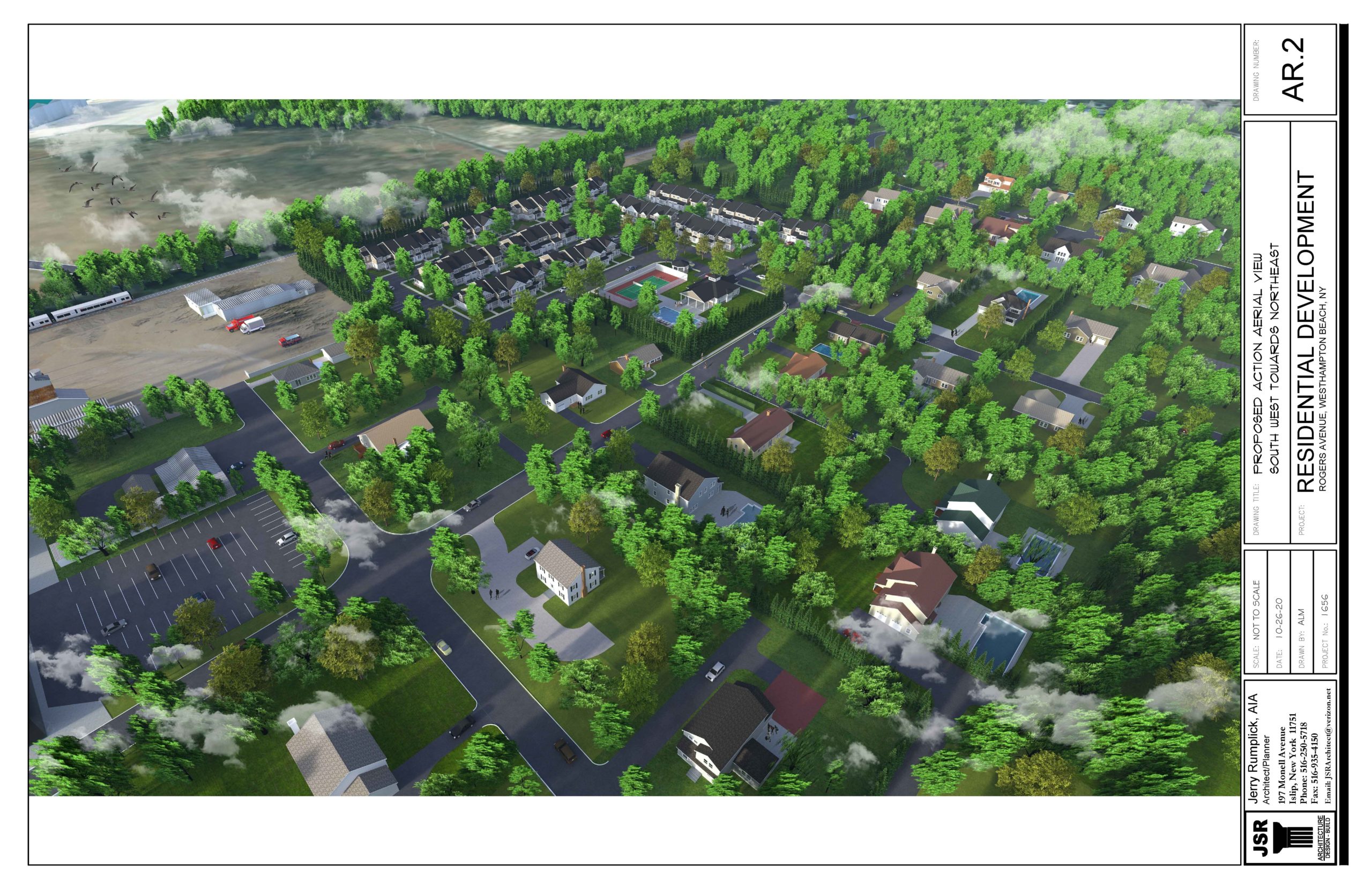 Westhampton Beach Village Planning Board Chairman David Reilly said the board members would be in “listening mode” at last week’s public hearing on a proposal for 52 condominiums on Rogers Avenue — and they got an earful.

The plan, dubbed “The Townes at Ketchaponack,” calls for 52 units spread among 13 buildings plus a community center, pool and tennis court on 9.4 acres that were once the site of an asphalt plant. The hearing on Thursday, March 25, allowed neighbors to comment on the draft environmental impact statement, which details the concerns the proposal raises and the measures being taken to mitigate those concerns.

Attorney Frank Isler of Riverhead represented the applicant, Rogers Associates LLC. He said the applicant is seeking site plan approval for the condos and a special exception permit from the Village Board. Additionally, the applicant is asking the village to abandon a 50-foot buffer from Rogers Avenue that was approved as part of a six-lot subdivision in 1992 that was never developed.

Carl Irace, an East Hampton-based attorney, represented a group of homeowners opposed to the plan. He named a number of areas of concern: traffic on residential streets, scale, zoning, future land planning, and water use and discharge.

He also questioned the number of units proposed on six lots: “It just seems like an aggressive number, even though it’s a 9-acre parcel,” he said. According to Mr. Irace, by his count, an “as of right” development of the six existing lots would allow, at most, six two-family homes.

Meanwhile, Village Planner Kyle Collins said at a previous meeting that, by right, a developer could yield 18 two-family homes there.

“It seems to me the community would benefit from some other thinking for this site,” Mr. Irace said. “Land planning opportunities don’t come along often at this scale in a community of this size.”

He suggested using the site for something that would serve the community or help the village coffers, such as a solar farm.

“With the concerns that we have for the future of our aging relatives and clear needs to find alternative sources of energy, wouldn’t it be better to see this site turn into something that suits the community’s needs, rather than this one particular applicant?” he said.

Christopher Clapp, who helped rally the neighbors who hired Mr. Irace, questioned the draft impact statement’s sewage analysis. He said the statement touted the benefits of an on-site sewage treatment plant versus conventional, individual home septic systems, but conventional systems are now prohibited for new developments. The analysis should compare a treatment plant for 52 condo units to the impact of a lower number of houses with innovative-alternative septic systems, he said.

Neighbor Mario Alba said the proposed sidewalks are not characteristic of the village. Another, Louis Sussan, said he doesn’t want to see 150-year-old trees ripped out, nor does he want to see Rogers Avenue turned into a New York City street.

A few people who spoke pointed out that the traffic study in the draft uses data from car counts during the pandemic, when far fewer vehicles were on the road than normal.

Neighbors hired Steve Schneider of Schneider Engineering in Ronkonkoma to give his view on the traffic study. He noted that the counts were done in August, which he said is normally a good time of year to count cars — but not in 2020. “The counts that were taken are pretty much worthless,” he said.

Patrick Lenihan, a traffic study consultant for the applicant, said new traffic from the development would not impact the character of the area roadways and would certainly not turn them into a freeway.

The hearing was kept open for continued comment at the Planning Board’s April 8 meeting.

The New York State Department of Environmental Conservation’s annual “Look for the Zero” public awareness campaign has returned to encourage homeowners to go phosphorus-free when using lawn fertilizer. More than 100 water bodies in New York State cannot be used or enjoyed because of phosphorus overuse, according to the DEC, which wants consumers to review fertilizer bag labels for phosphorus content before buying. Fertilizer bags have an N-P-K number that shows the percentage of nitrogen, phosphorus and potassium that the product contains. So, for example, a bag labeled 22-0-15 is a high-nitrogen fertilizer with no phosphorus at all. Nitrogen causes ... 11 May 2021 by Staff Writer

U.S. Senator Kirsten Gillibrand is co-sponsoring legislation to provide a $4,000 tax credit for homeowners, landlords and renters to cover the cost of abating lead hazards in paint, pipes and soil. Under the Home Lead Safety Tax Credit Act of 2021, the credit would be available through 2024 to cover up to half of the cost of lead abatement. If enacted, the legislation would also supplement federal, state and local programs to replace lead pipes that deliver drinking water. “Everyone should have a home that can keep them safe from health risks, yet thousands of New Yorkers and their families ... 10 May 2021 by Staff Writer

It’s a warm, sunny spring day, and I’ve come home to have my lunch on ... by Andrew Messinger