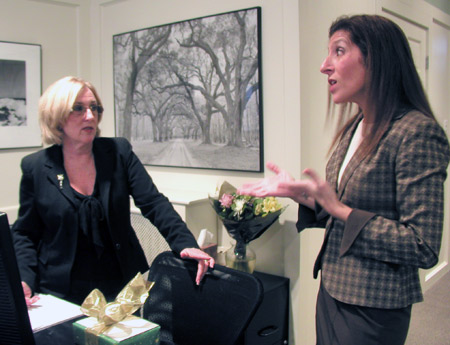 Most people who own homes at some point worry about being able to make their mortgage payments, but a group of concerned women whose work is shaped by East End real estate believe many people are too afraid of the consequences to ask for help with their mortgages before it’s too late.

Town & Country Real Estate agent Elizabeth (Missy) Capozzoli is leading the group in a series of free workshops titled “Options for Homeowners in this Troubled Market.” The first workshop will be held on Wednesday, January 14, at 7 p.m. at the Hampton Bays Library on Ponquogue Avenue.

“I came up with the concept while I was getting certified in short sales,” said Ms. Capozzoli, referring to the practice of selling houses for less than the outstanding amount of a mortgage. “The teacher was trying to teach us to capitalize on people’s misfortune. I realized no one wants to help people.”

“We want to inform people what their choices are. We’re hitting a very hard time. I’m showing houses that have foreclosed, where the people have been evicted,” said Ms. Capozzoli.

She added that it is in everyone’s interest for individual homeowners to protect their homes from foreclosure, because foreclosed properties reduce the value of all properties in the area.

“Every time a house gets foreclosed on, all the other houses lose a percentage point in value in the neighborhood, which means there’ll now be more short sales and more foreclosures,” she said.

A representative from Congressman Tim Bishop’s office will also attend the seminar, though Ms. Capozzoli said that the representative will be gathering information and will likely not give input about potential governmental help for the mortgage crisis.

“People get afraid and they can’t pay their bills. They start getting letters and ignore them rather than explore their options,” she said. “Their options are basically refinancing to see if they can do something to change the loan. We want to first see if we can help them to refinance. That’s what Victoria will do. We’ll give them the option of a short sale, which is much better for their credit.”

Ms. Capozzoli, who had been an agent with Allan Schneider Associates and the Corcoran Group before joining Town & Country last year, said that the process of holding a short sale must be undertaken before homeowners have fallen so far behind on their mortgages that foreclosure is an imminent threat.

“A short sale is when a house is now valued less than what is owed on the mortgage,” she said. “There’s a lot of that out here. People don’t even understand that they can get out if they want to sell. The homeowner needs to write a letter to the bank explaining dire circumstances. If the bank says yes, we negotiate what they will take.”

She said that many banks are more agreeable to a short sale, since if they go through with full foreclosures, the bank often has to pay property taxes.

“Some banks will only take 88 percent of a loan’s value, but others are taking 50 cents on the dollar,” she said. “It’s great for investors and great for sellers; because your house is foreclosed on, the bank is entitled to attach a personal judgment against homeowners.”

In the case of a foreclosure, that judgment takes seven to 10 years before it is no longer on a homeowner’s record, while sellers’ records will be clear in about nine months with a short sale.

Ms. Capozzoli said that none of the women who are leading the seminar will be paid for their work, unless a short sale goes through, in which case the agents and attorneys involved with the sale will be paid by the banks involved.

In addition to the Hampton Bays seminar, Ms. Capozzoli is planning two more, one in the East Hampton community of Springs and one in the North Fork, in the coming weeks.

“Those are the areas where they’re going to be hardest hit in the near future,” she said, adding that she bases that belief on the broker price opinions that she has been asked by banks to supply about properties in Springs and Hampton Bays.

“Because of drops in sales, the sales that are happening are much lower than they were. A year ago [banks] would have taken comps within the past six months. Then it was 90 days. Now they’re asking for the market comps. Everything is changing.”

Victoria Homan, the mortgage broker who will be participating in the seminar, said that there are many misconceptions about just what homeowners can do to salvage their mortgages.

She said that the biggest misconception that she usually encounters is that people believe they cannot qualify for any financing.

“Financing is still available. New programs are being developed weekly to assist in this period,” she said. “In this changing period, it is extremely important for homeowners to speak directly with a professional mortgage broker and discuss their whole scenario and be properly informed of the new possible solutions available to them. There is so much generic information thrown out by the press that will confuse any individual to a point that they may feel there is no hope, when in fact that news is irrelevant to them.”

Robin Long, the attorney who will be assisting homeowners, sounded a much more dire note.

“A lot of people don’t realize how much trouble they’re in. They have loans with negative amortization, prepayment penalties,” she said. “Banks were doing 103 to 106 percent financing. They were putting in substantial pre-payment penalties of 3 to 5 percent and ‘teaser rates’ that were not sufficient to pay off the interest on the loan. They would end up owing more than when they first started.”

“What the feds are saying they’re doing is not reaching anybody and is not helping anyone. Those of us in the trenches realize this is all a facade,” she said.

She pointed to an example of an 82-year-old woman in Southampton whom she is consulting with who was sold a 30-year refinancing of her home when she made $500 per month on social security.

“This is not the exception. This is the rule,” she said. “This is in the Hamptons. This is happening out here. Until the federal government makes the decision that they’re not going to buy up this paper and forces the banks to put their loans in perspective, we’re going to have modifications that mean nothing. Low interest rates mean nothing if you don’t have the equity to refinance.”

Ms. Long said that she has no idea whether the government will step in and force banks to reevaluate the principal people owe on their mortgages.

“I don’t have the time to solicit politicians I just have a list of people who come into my office and cry,” she said. “I’m a real estate attorney. Can you imagine how much my business is off? But lawyers do have an ethical responsibility to help.”

“When people are losing their houses, they’re frozen in a spot and they can’t function,” she said. “This is ruining everything. You can’t bail out the auto industry because no one’s going to buy. You can’t do that until you fix what’s wrong with housing.”

Ms. Capozzoli said that another common misconception she’s heard is that the new leaders in Washington will somehow absolve homeowners of the responsibility to pay their mortgages. She said she recently ran into a man with a good job who told her that he hasn’t paid his mortgage in a year.

“Everything’s changing now because of the economic situation that we are in,” she said. “People that make informed decisions make good choices. People who make decisions because they’re scared usually get taken advantage of.”