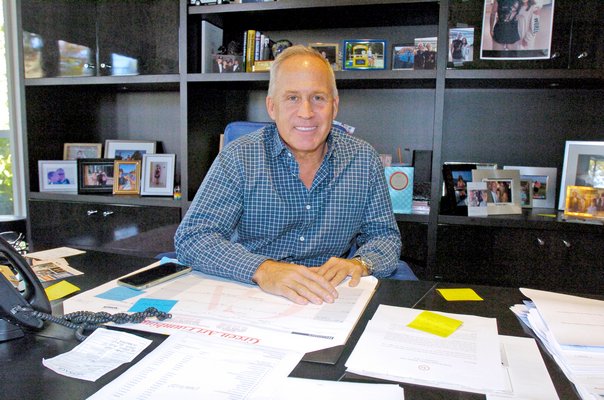 Joe Farrell in his office in Bridgehampton. DANA SHAW

Two recent million-dollar price cuts illustrate the business strategy of speculative builder Joe Farrell‚Äîto keep inventory moving ‚Äúso you can move on.‚Äù‚ÄúI love to get the money and put it to work again,‚Äù said Mr. Farrell, who‚Äôs diversified his portfolio to include a broad range of price points as well as geography‚Äînot only on both sides of Montauk Highway on the East End but also in Florida and upstate New York.

‚ÄúWe build in volume,‚Äù he said. ‚ÄúI don‚Äôt have to sit there and wait to make a fortune in one house.‚Äù

Not waiting to get the highest price possible enables the developer to start a new project‚Äîoften at a different price range or neighborhood that might be hotter at the moment. If the high end gets soft, for example, it helps to have inventory at a lower price point.

The Bridgehampton-based Farrell Building Company has its own architects, engineers, paralegals and excavators, among others. The company took a hit in the 2008 recession and had to lay people off, and Mr. Farrell said he doesn‚Äôt want to go through that again, even though the business eventually doubled in the years that followed.

‚ÄúI went to a different business model,‚Äù Mr. Farrell said of a time following the recession when he transitioned from building $15 million to $18 million homes to $3 million to $5 million ones. ‚ÄúWhen next recession comes, I need work,‚Äù he said, and to that end he has any number of irons in the fire.

In addition to residential projects both north and south of Montuk Highway, they include two $30 million oceanfront homes just south of Miami, a self-storage building in Port Jefferson, a 92-bed assisted living facility in Fishkill, and convenience stores and a 163-unit apartment building in Newburgh, New York.

In the Hamptons, Mr. Farrell said he‚Äôs finding that land prices aren‚Äôt going down, but that there is less competition to buy the land. ‚ÄúEvery builder and their brother, they‚Äôre all here,‚Äù he said, but ‚Äúa lot of builders are tied up‚Äîtheir capital is tied up.