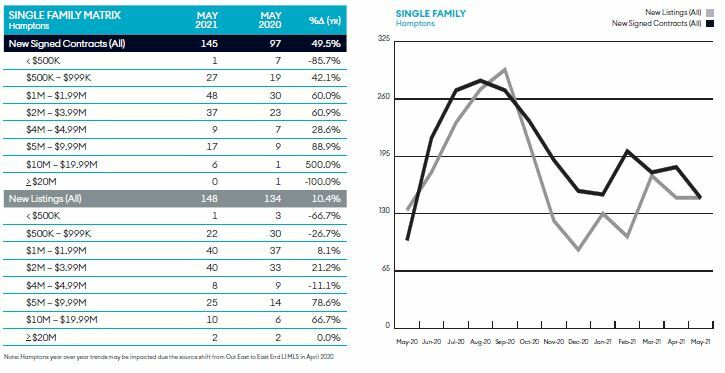 In May 2020, New York State social distancing mandates prohibited in-person real estate showings with brokers — but the Hamptons market still saw a healthy 97 contract signings for the sale of single-family homes, as the safety and comfort of living on the East End drew buyers amid the pandemic.

Fast-forward to a year later, and in May 2021 new signed contracts numbered 145, according to The Elliman Report, a 49.5 percent increase.

May 2021 was the 12th month in a row that inked deals outnumbered the count during the same month a year prior. While sales activity is not as frenzied as it was in August 2020 — when the pandemic-driven surge peaked at 278 new signed contracts in a single month — buyer interest in the Hamptons has been sustained.

The growth in new signed contracts skewed toward higher price points as deals for homes priced at $500,000 or less dwindled to almost nothing, from seven in May 2020 to just one in May 2021. Contracts for $5 million or more went from 11 to 23.

The number of new listings to hit the market last month was 148, just slightly exceeding the number of homes that entered contract. The new listings also skewed most expensive: In May, new listings under $1 million went from 33 in 2020 to 23 in 2021, and listings for $5 million or more rose from 22 to 37.