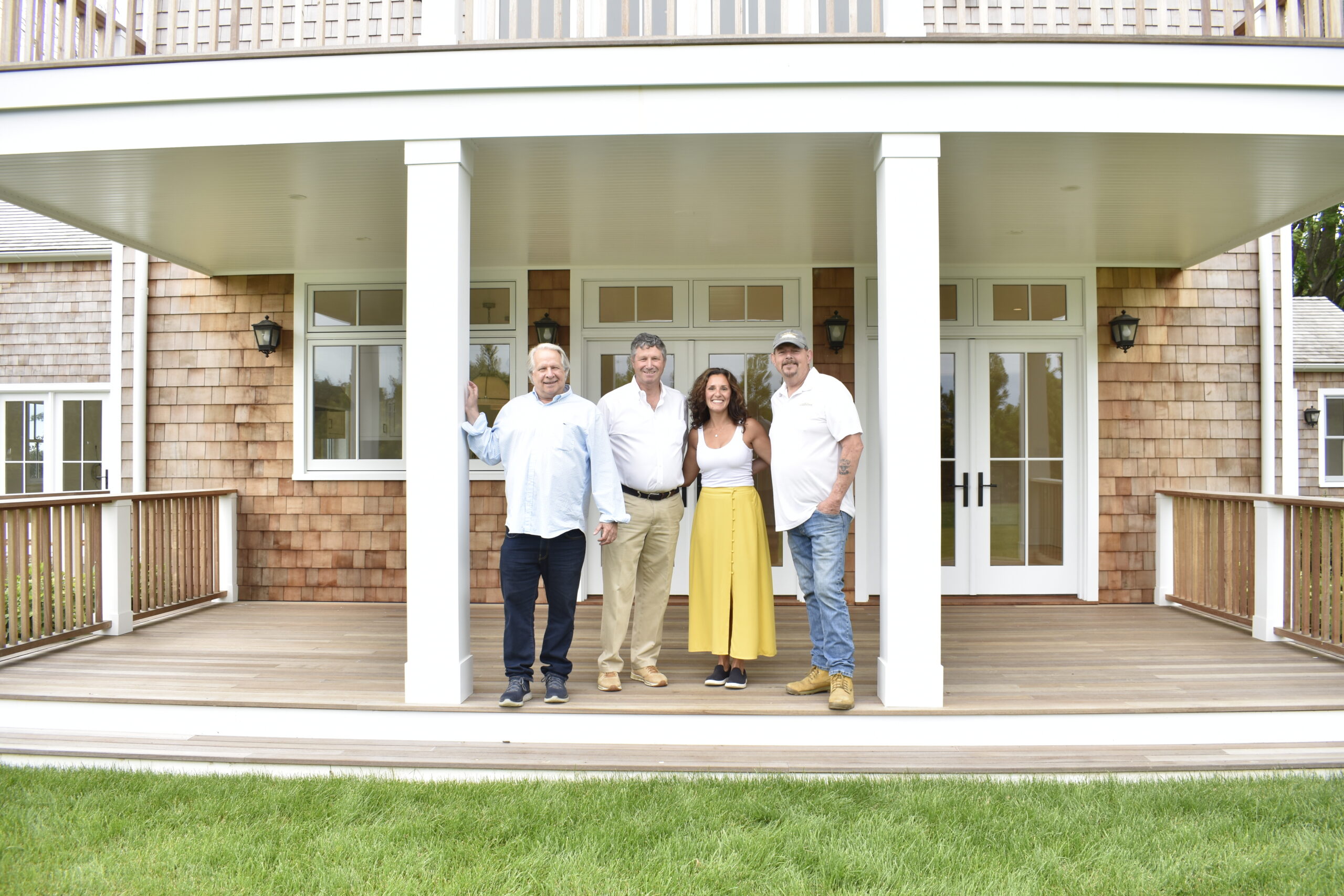 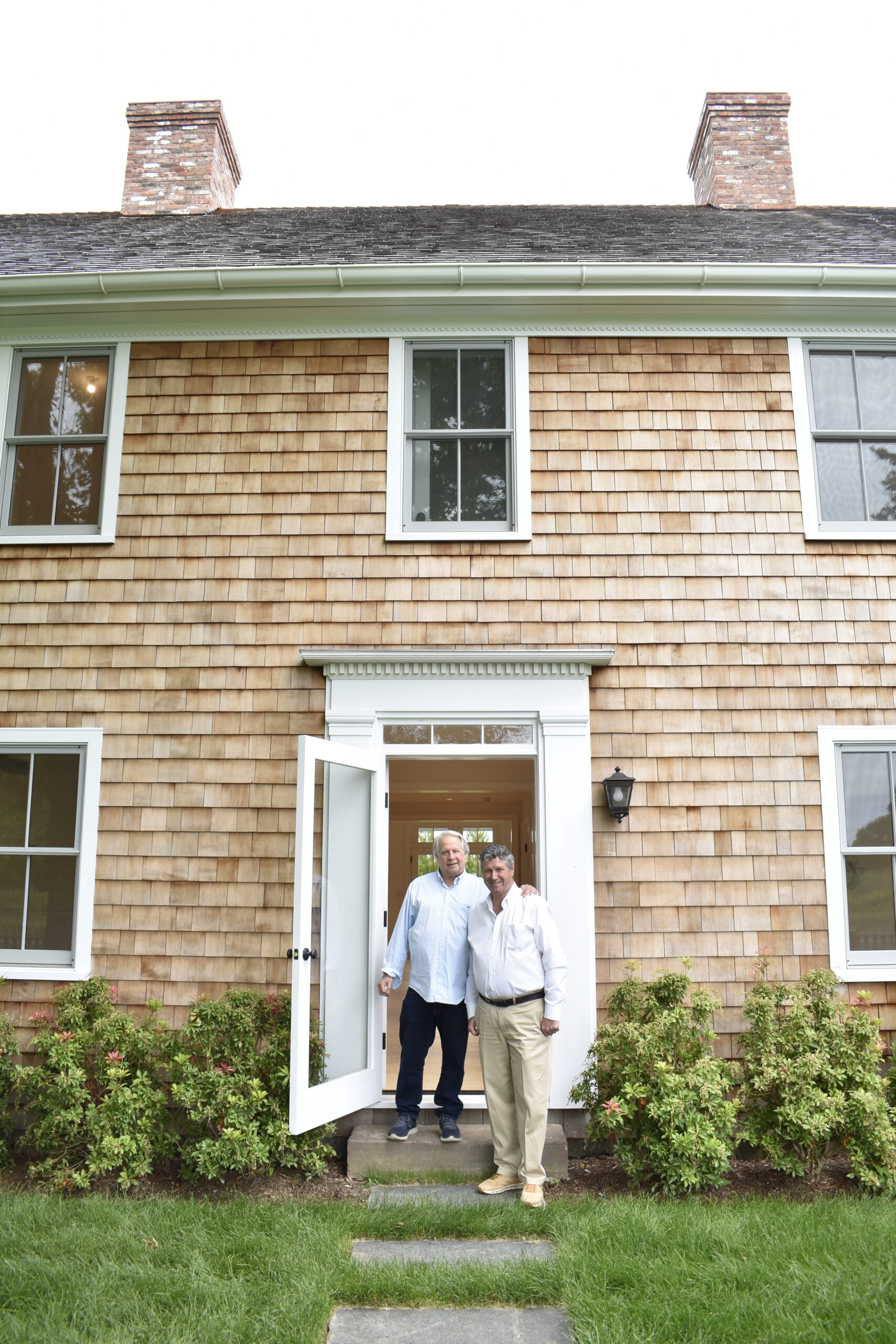 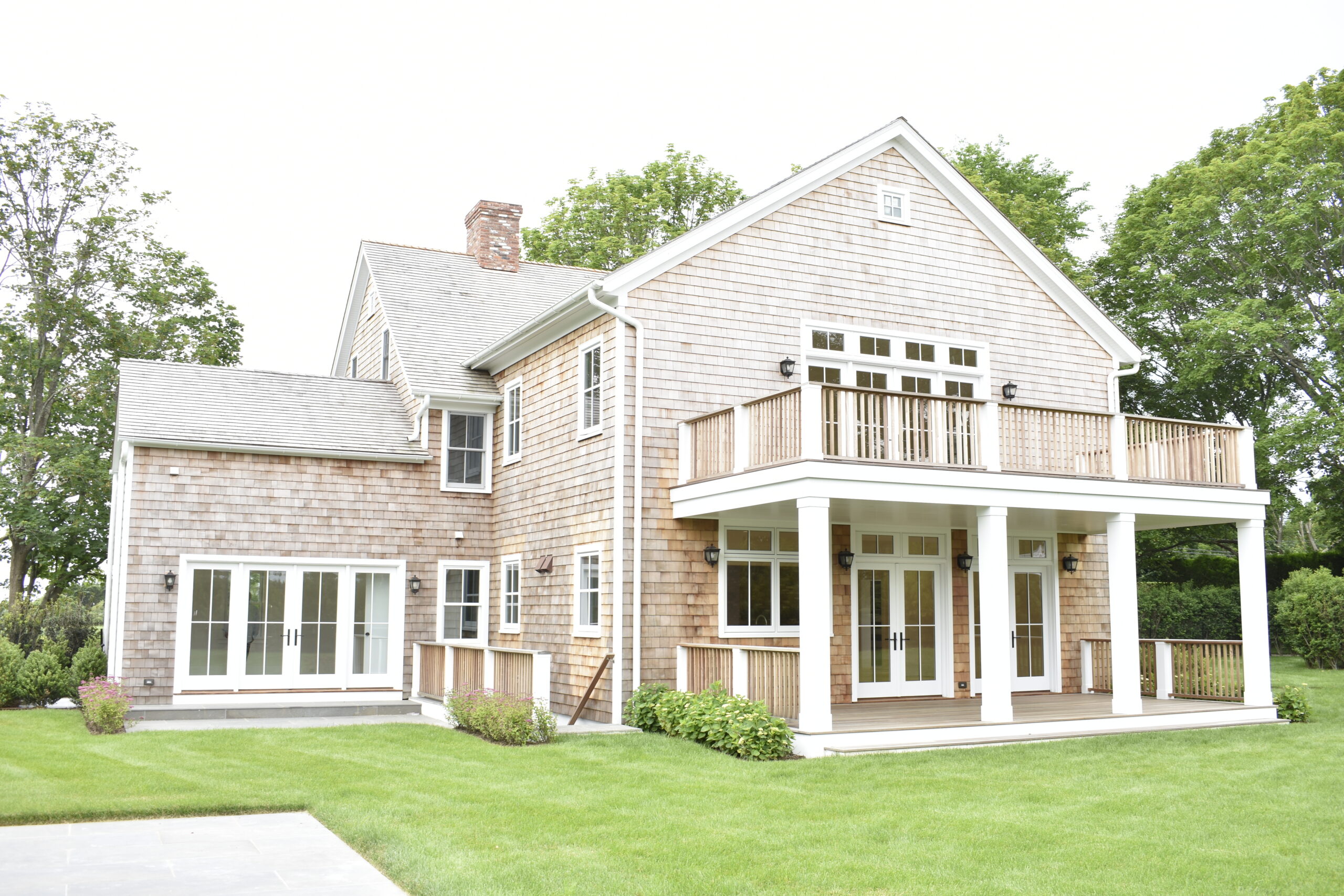 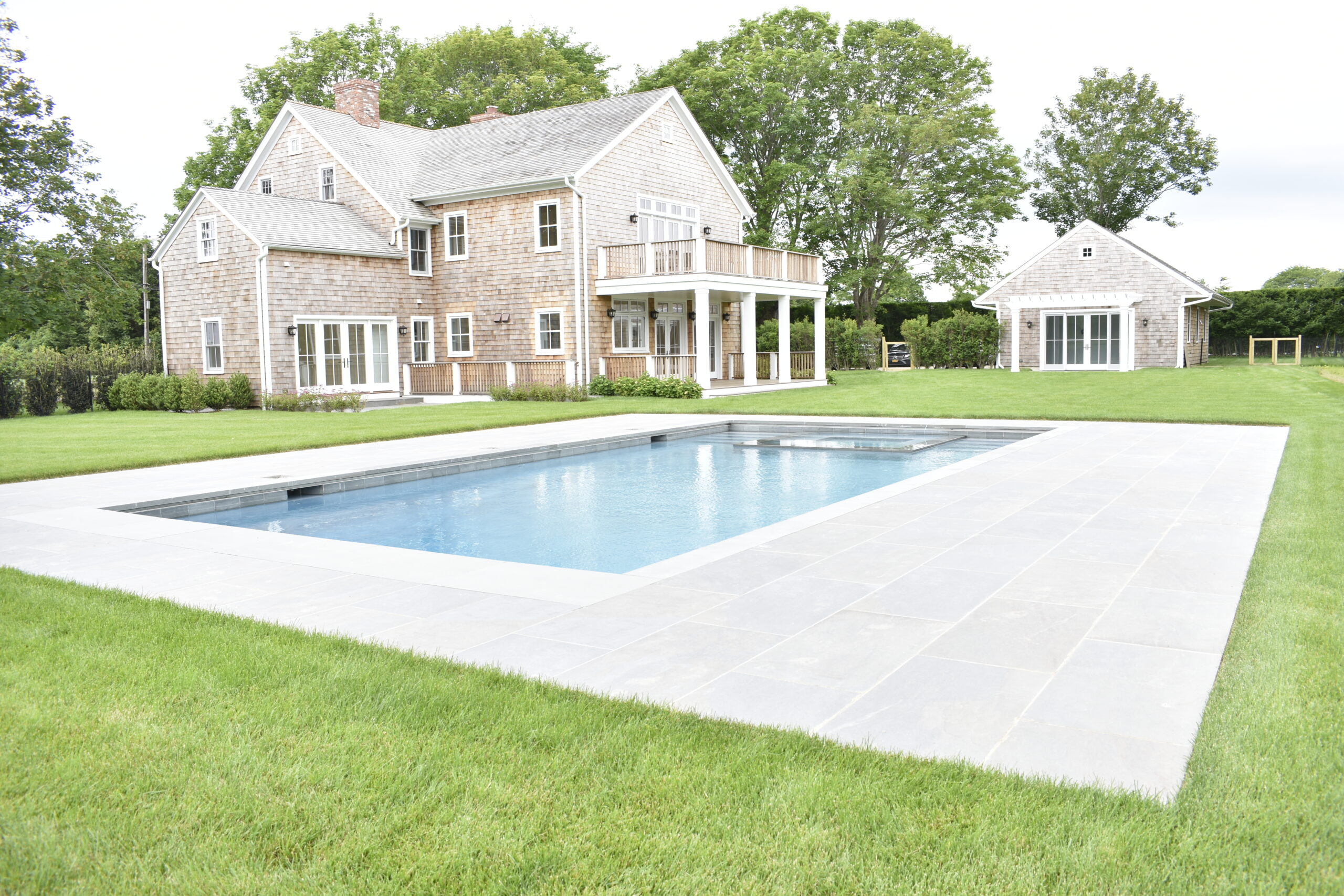 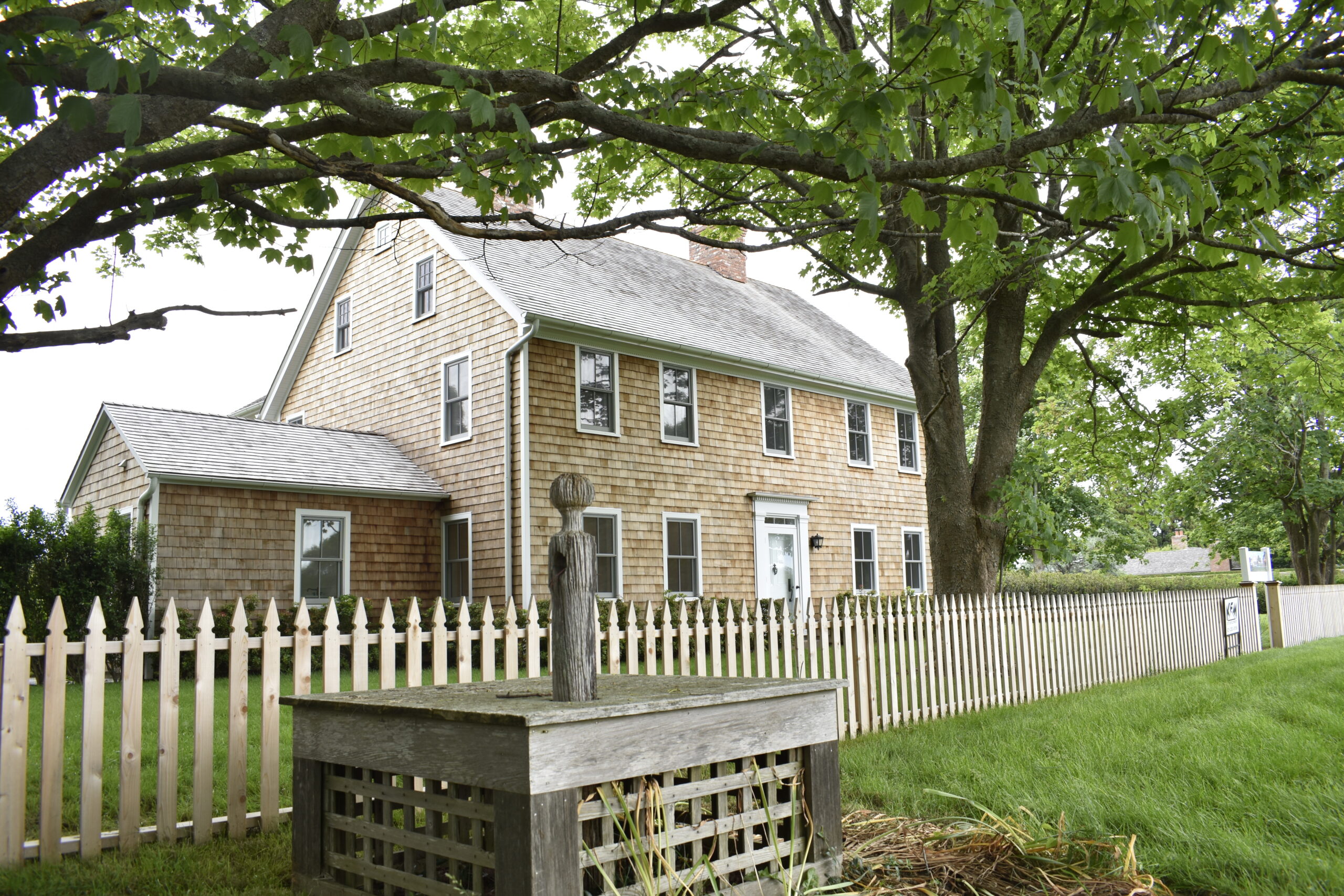 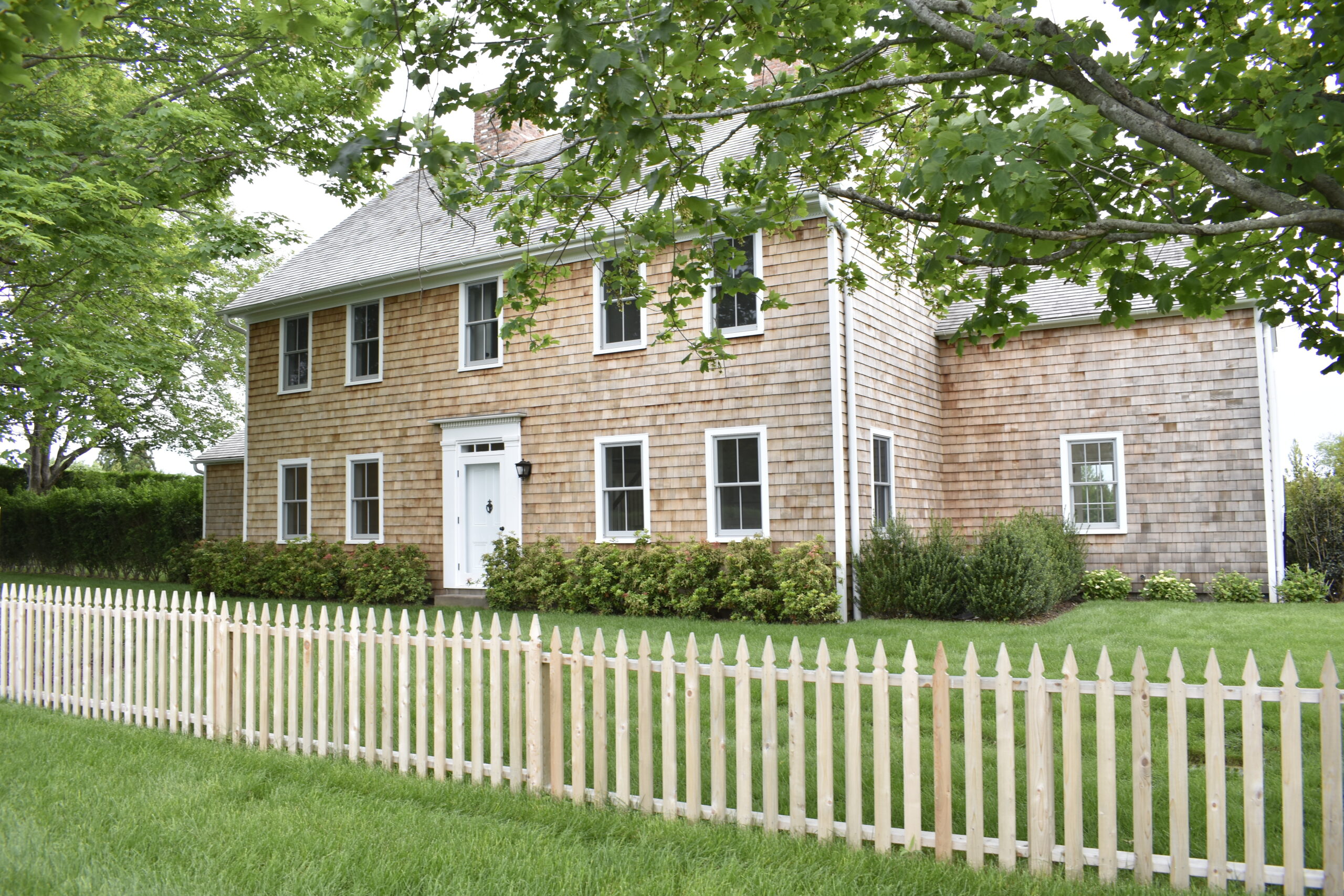 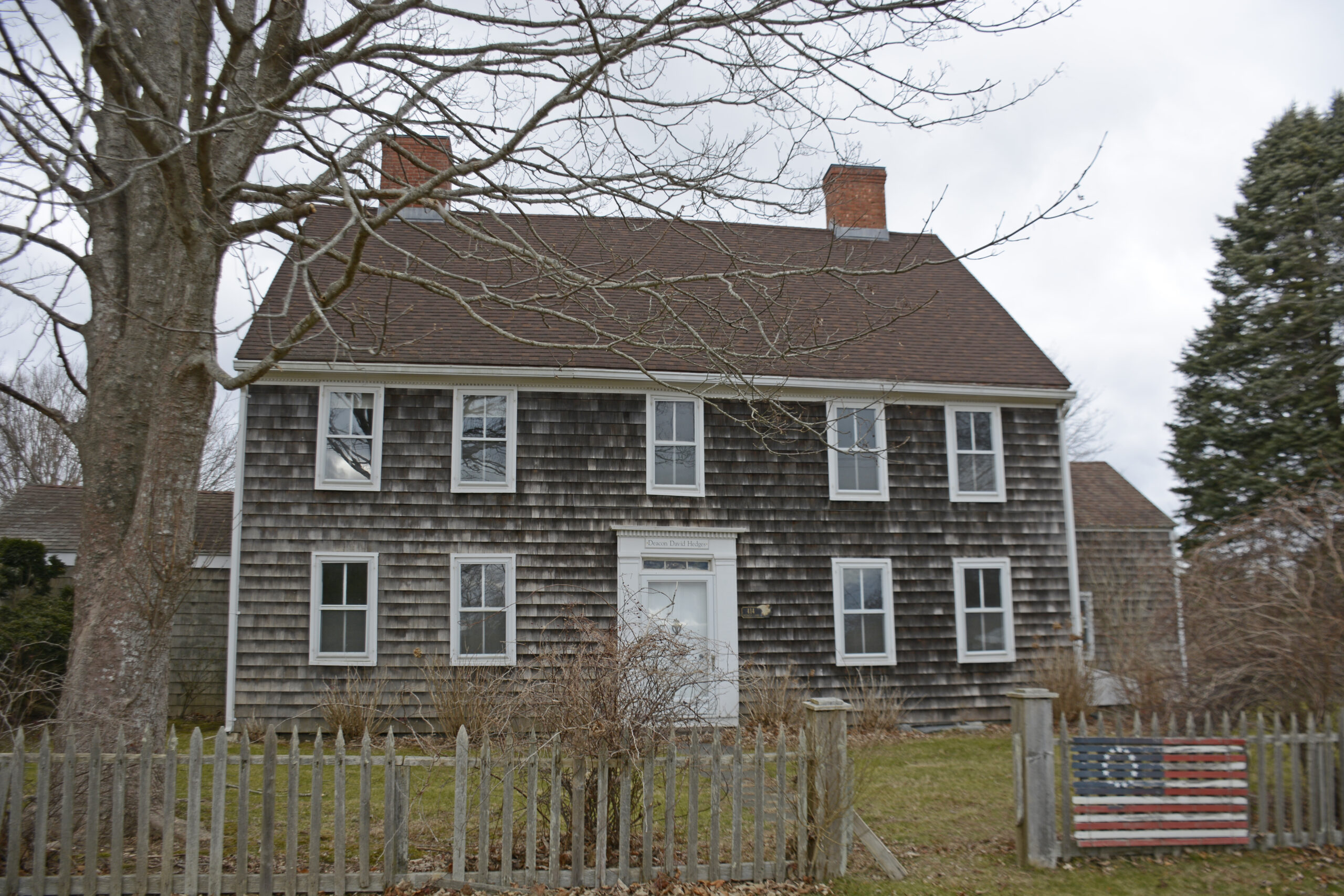 The 1775 Deacon David Hedges House on Hedges Lane in Sagaponack in 2019. JD ALLEN 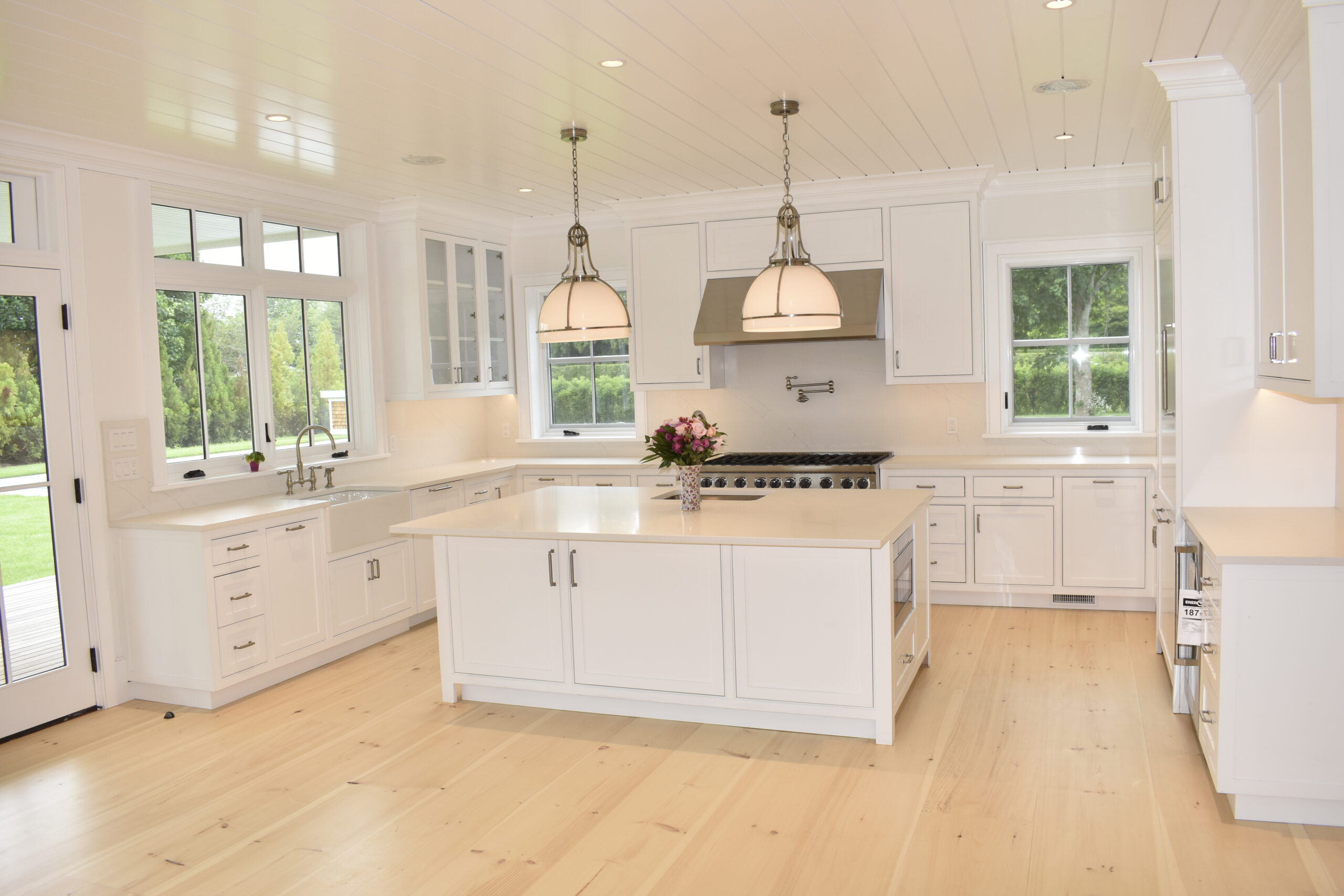 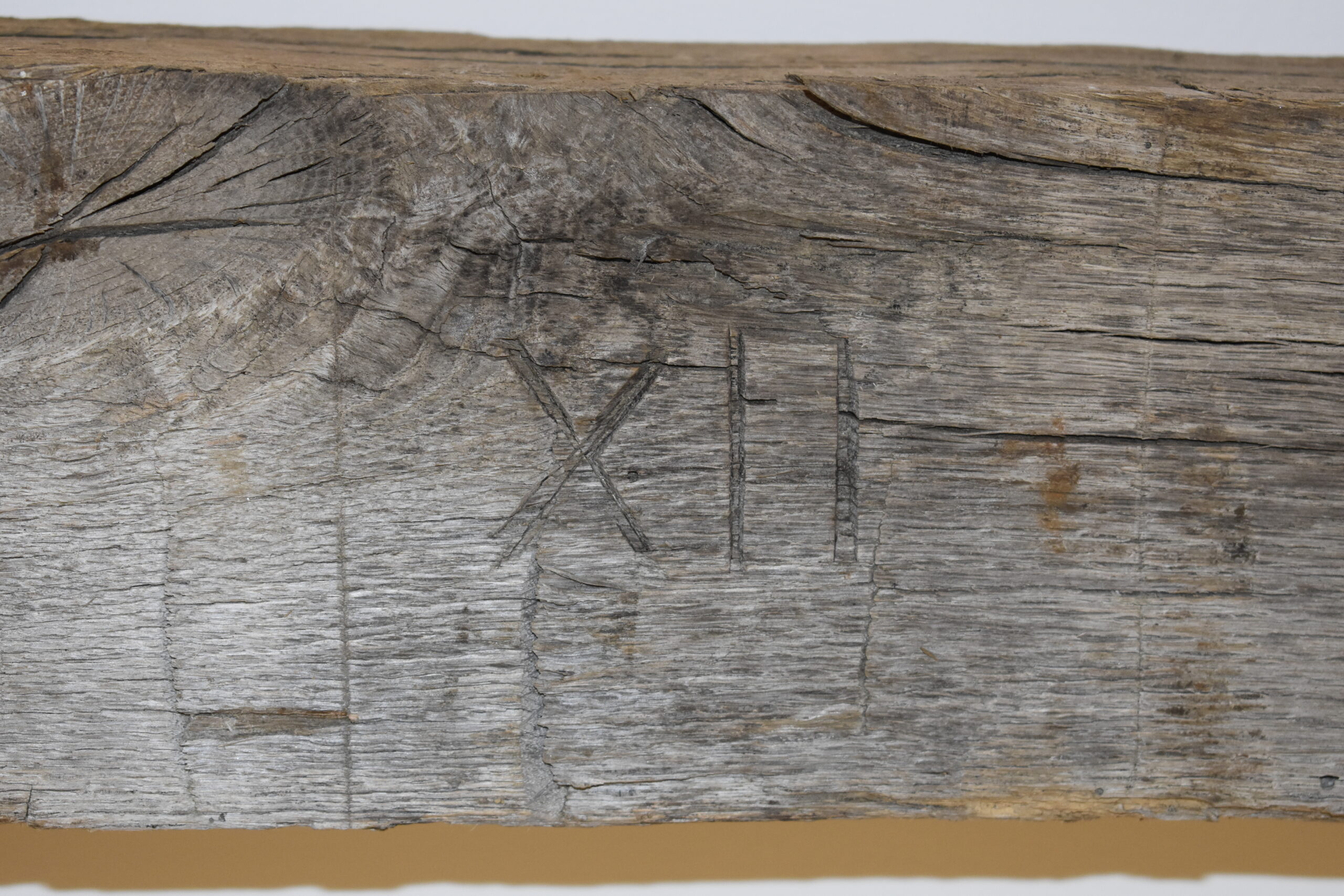 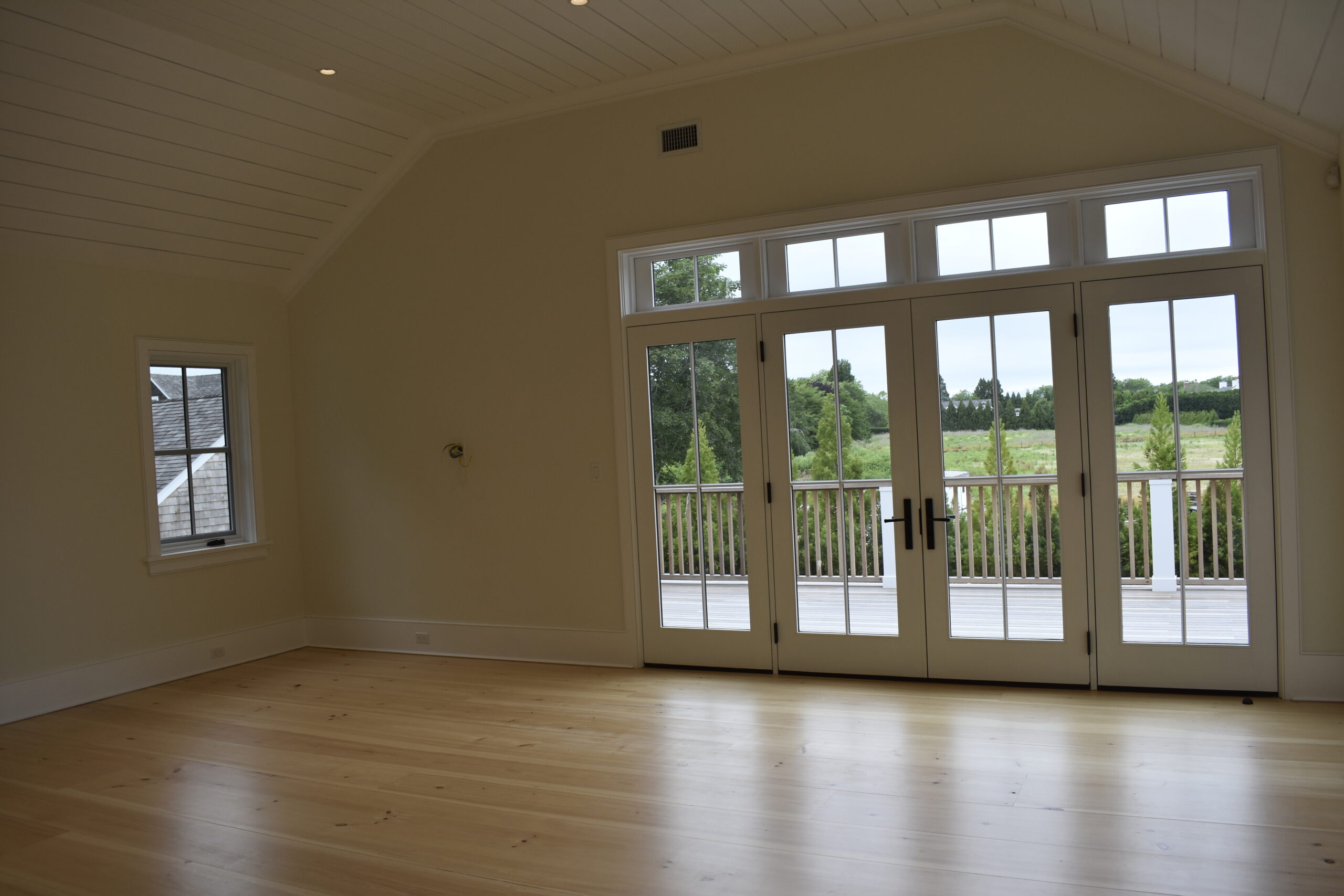 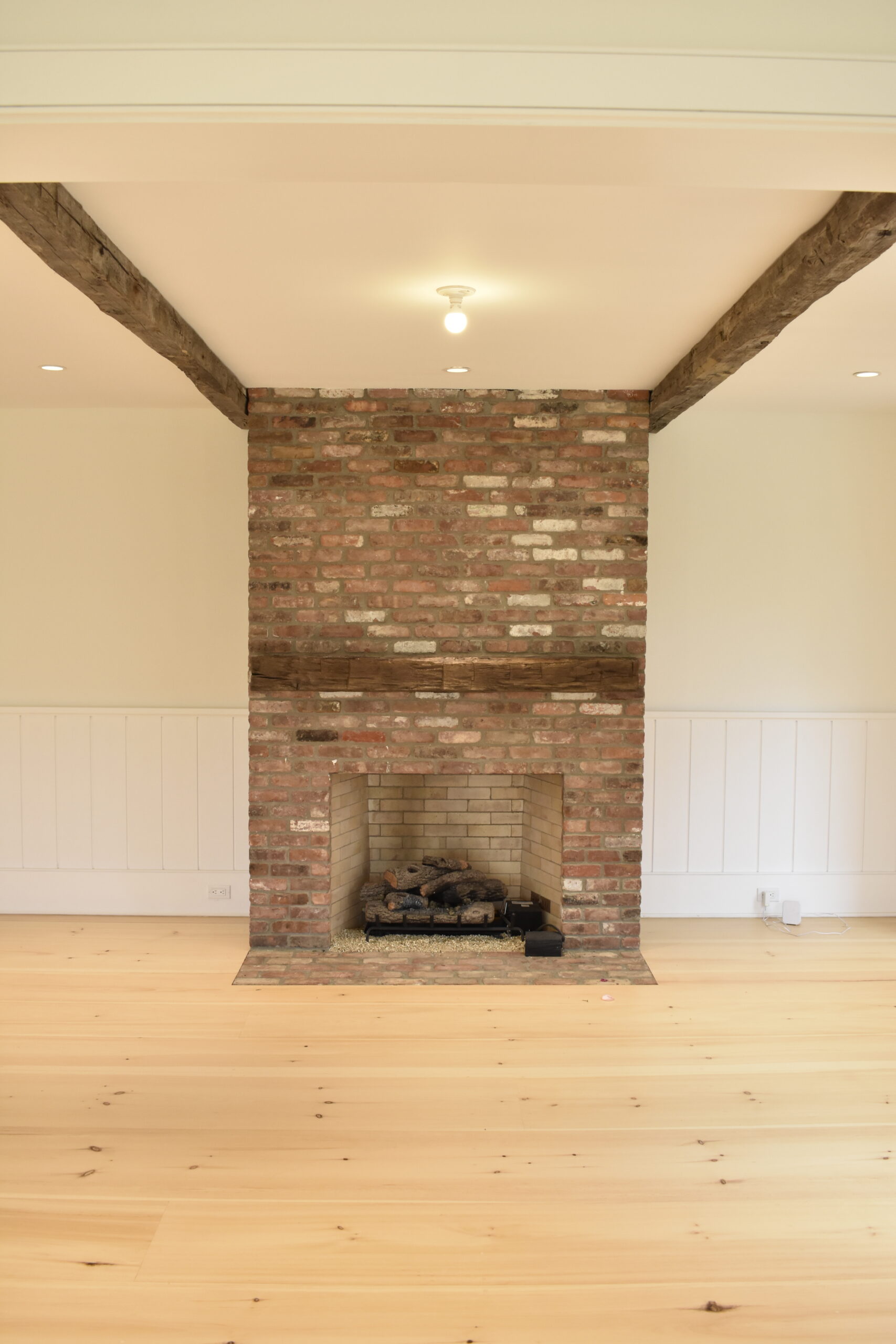 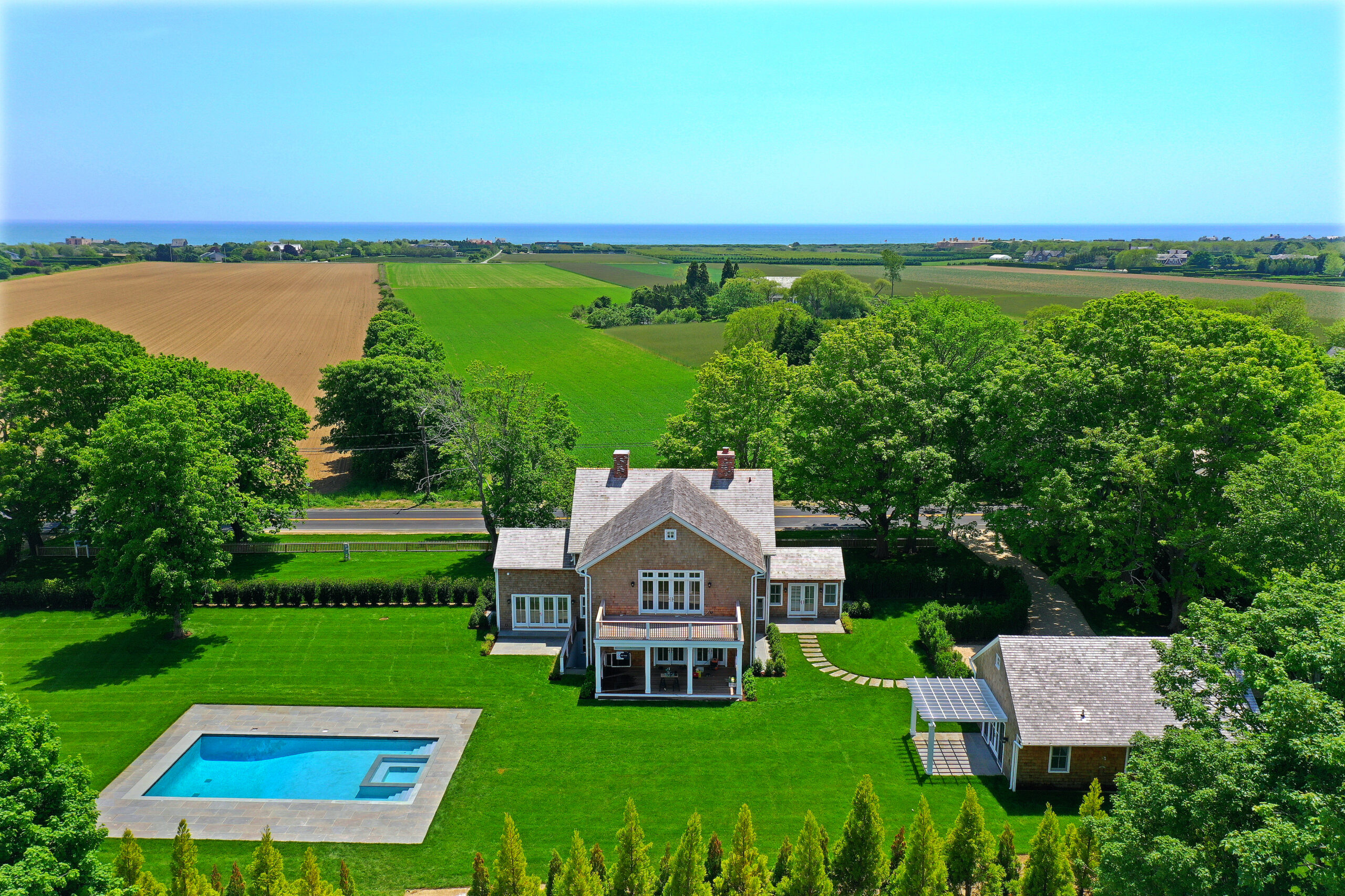 The Deacon David Hedges House, a colonial-era home in Sagaponack Village, was once the subject of a demolition proposal, but today, it’s been painstakingly renovated with historic preservation in mind and updated with modern amenities.

From Hedges Lane, the house built around the time of the nation’s birth and kept in the same family for 14 generations looks the same, though with a new roof and new cedar shingle siding. What passersby can’t see is the new rear section of the house, the backyard pool and the newly dug finished basement.

Developer Michael Streit of Home Enterprises in Manhattan and Water Mill led the project with Southampton architect John Laffey and Manorville builder Craig Watson. The team offered a tour of the completed project this month.

Laffey said records indicate the home was built around 1775-1776.

The house’s namesake would later serve as one of the delegates to New York State’s U.S. Constitution ratifying convention.

In stripping down the house to prepare to restore it, the team uncovered three centuries of history, including the original timbers and the marriage marks that indicated where the pieces joined.

“It was just a fun experience of going back into early American craftsmanship,” Laffey said. “Can you imagine building this place 300 years ago? It’s tough enough to get lumber now. Imagine having to mill it yourself.”

The goal was to preserve as many of the original elements as they could while upgrading the structure to modern building standards.

“We had to essentially duplicate what was here,” Streit said. “The town’s main concern was that from the street, the house didn’t look any different than it does now. So we were very careful to make sure that happened. If there were any questions along the way, we always consulted with the town to make sure we were doing it the way they wanted it done.”

Lepage Millwork in Canada made replicas of the original windows, with the same light divisions.

“They had to match the old windows exactly, and that’s why you see a little bit of a mix with two-over-two panels and three-over-three panels up there because that’s the way the original windows were,” Streit said. “So we had to replace them exactly as they were.”

The windows match how the house appears in photos that were taken 100 years ago, Laffey said. “Some are off-centered a little bit,” he noted. “That’s because that’s the way they were when the house was built.”

The original front door, the transom window above it, and the stone that visitors step up on to reach it were all retained.

Also seen from the street are sycamore maples that are many decades old and an old horse hitching post.

The house had sat on a crawlspace made from field rubble that was falling apart, Laffey said.

In a long and complicated process, the house was lifted so a habitable basement could be added and the house could be made level again.

Streit said the house was braced, section by section, then lifted up.

“There was a 4 or 5 foot difference from one side of the house to the next,” he continued. “It was quite cockeyed and twisted to say the least. So as it was coming down, they had to remove and rebrace and reframe literally as it was being lowered to make sure that it squared off and sat on the foundation perfectly.”

He credited Watson’s team for making that happen with Laffey’s oversight.

The interior work also had its complications.

“Working around the interior of the house, it was almost what you’d call a surgical framing because we had to leave the old beams there, but to build to today’s code,” Streit said. “You also had to build around those beams and reinforce them, and it’s probably, in time and labor, the equivalent in doing three and a half houses in framing.”

“We saved as much of the architectural fabric of the house as possible,” Laffey said. “… There are 300-year-old beams next to brand-new ones.”

One of the most interesting things to Streit was an original walk-in fireplace designed for cooking. He said that over the years, the clay and cement that held the bricks together had worn down. “So when we took the chimney down and stripped the house, we saw the whole interior of the house was charred,” he recalled “… The fact that this house didn’t burn down is amazing to me, because it was all charred inside.”

He said inspectors saw the walk-in fireplace and agreed it couldn’t be saved. However, there is an original brick fireplace and mantle retained in the dining/living area.

The new floors are pine boards of irregular widths, between 12 and 18 inches. Watson explained they were screwed down and then wood plugs were used to cover the screw heads.

As far as the amenities go, the kitchen has Miele and Viking appliances and a marble backsplash, and the bathrooms have high-end finishes. The house is fully wired for a sound system as well, and in the basement there is a cedar-lined wine cellar. The house is also served by a five-zone HVAC system and a central vacuum system.

“It’s a house from 1776 with a vacuum system,” Streit said. “That kind of defines it all, because there’s really nothing that the house is missing.”

In addition to the wine cellar, the basement has a wall of reclaimed brick from the original structure, a bedroom/gym, a recreation area and a full bathroom.

The house is clean and simple, and “lives nicely,” Streit said. He also pointed out that there is a reserve across the street that can never be built on, and on a clear day there is a view of the ocean.

The property also has a new garage, and surrounding the new pool and spa is porcelain tile.

“It looks exactly like bluestone, but it wears much longer,” Streit said of the porcelain.

A deck off the kitchen and dining area is mahogany, and Summerhill Landscapes of Sag Harbor designed the landscape.

The project faced a number of delays before getting to the point, including a neighbor’s lawsuit to stop a subdivision. COVID, the pandemic-related shutdown and supply chain issues were other major hindrances.

“We started to strip the house and get it lifted, and then COVID hit,” Streit said of 2020. “So we were shut down from March till the end of June.”

The custom windows he ordered were four months behind schedule, lumber costs went up, PVC and copper piping orders were delayed and one shower accessory took a year to arrive.

Streit said it was frustrating that a subcontractor would get to be 80 to 90 percent complete when one missing part would mean they couldn’t finish.

He said the property had not been touched or lived in for 14 years and was decaying before he acquired it.

The parcel was subdivided, so the original house is now on 1 acre and a flag lot to the north is 2.25 acres. The flag lot is vacant for now.

“We still haven’t decided what to do with it,” Streit said.

Regina Cigna of Douglas Elliman Real Estate, who is representing the Hedges House along with fellow associate broker Linda Haugevik, said people in the community have enjoyed watching its progress.

“Now, seeing it in its beauty, is really special,” she said. “It’s a really great house to represent, and the property is spectacular.”

Laffey said the easy way out would have been to knock the house down and build new, but keeping the character and the history of the house was important.

“I’m very happy, very proud to say, when you drive by this house now, it looks exactly like it did 100 years ago,” he said.