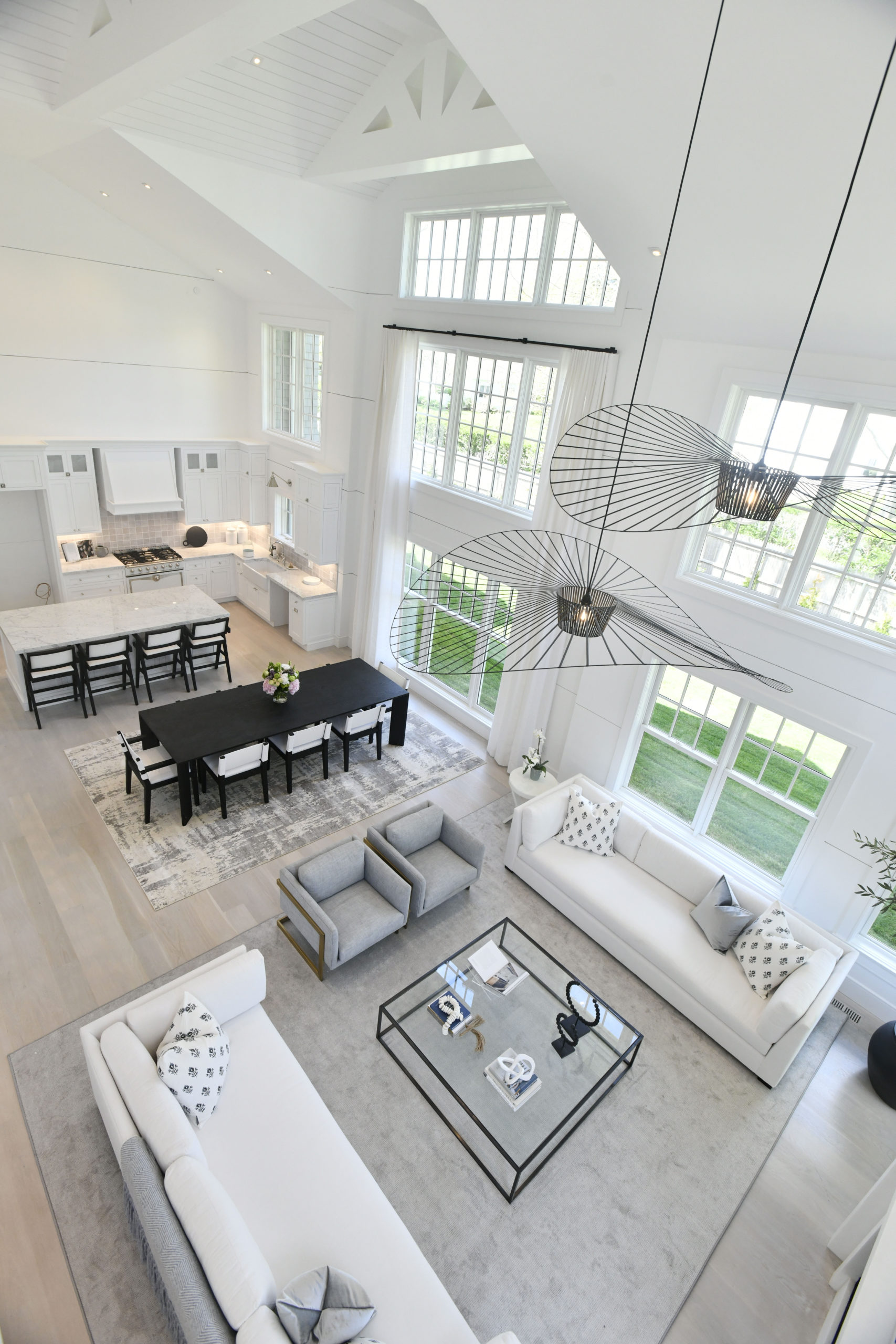 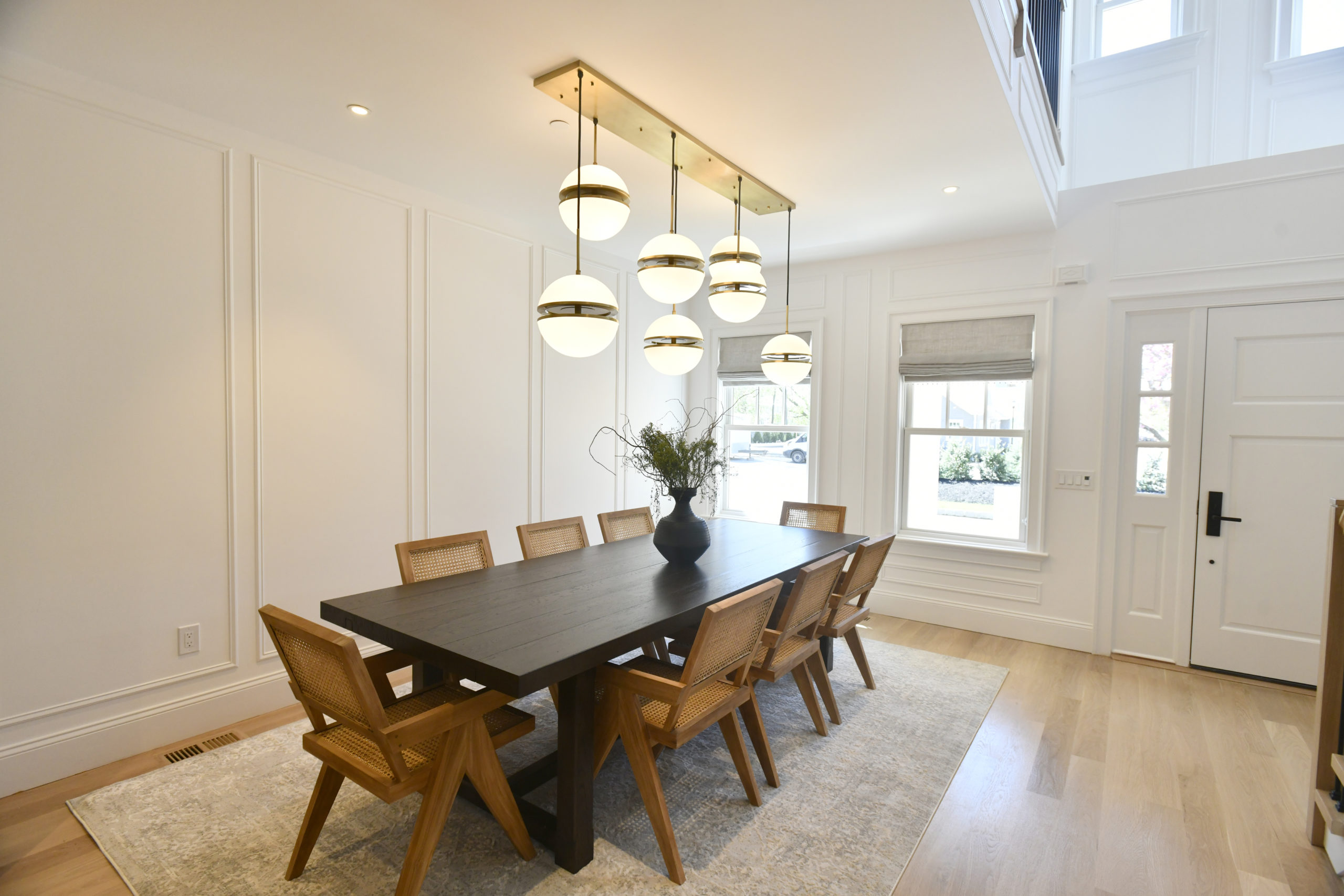 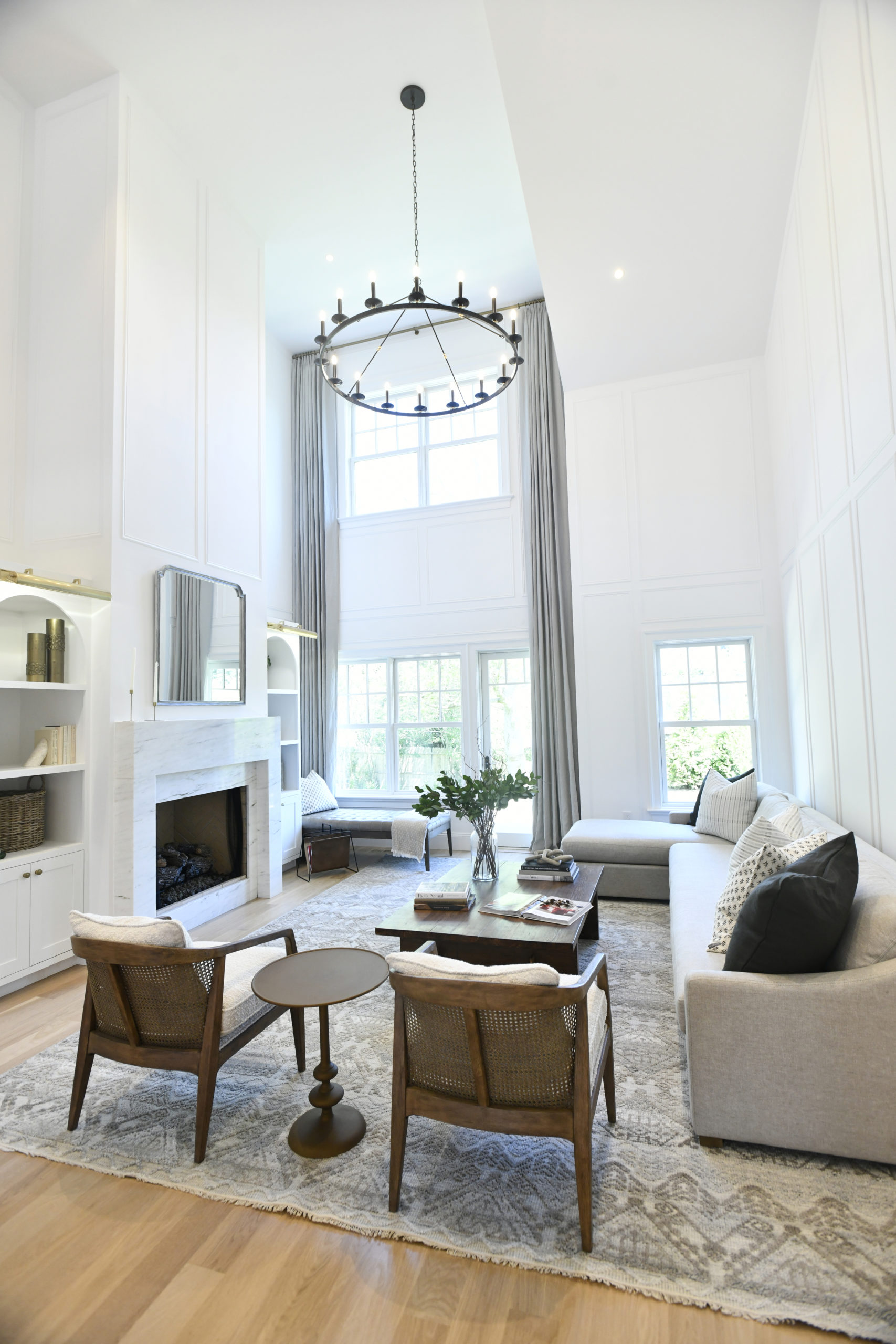 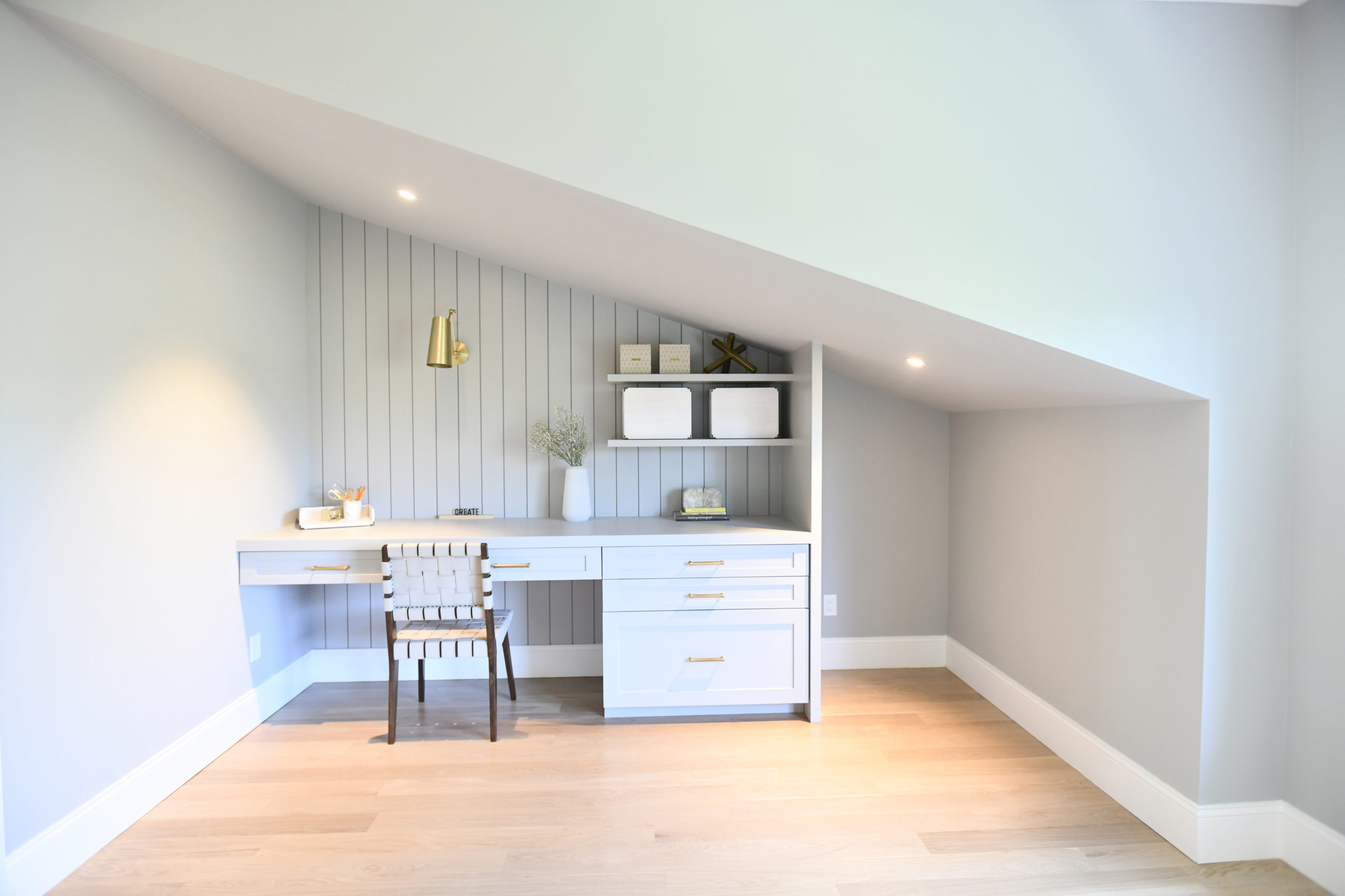 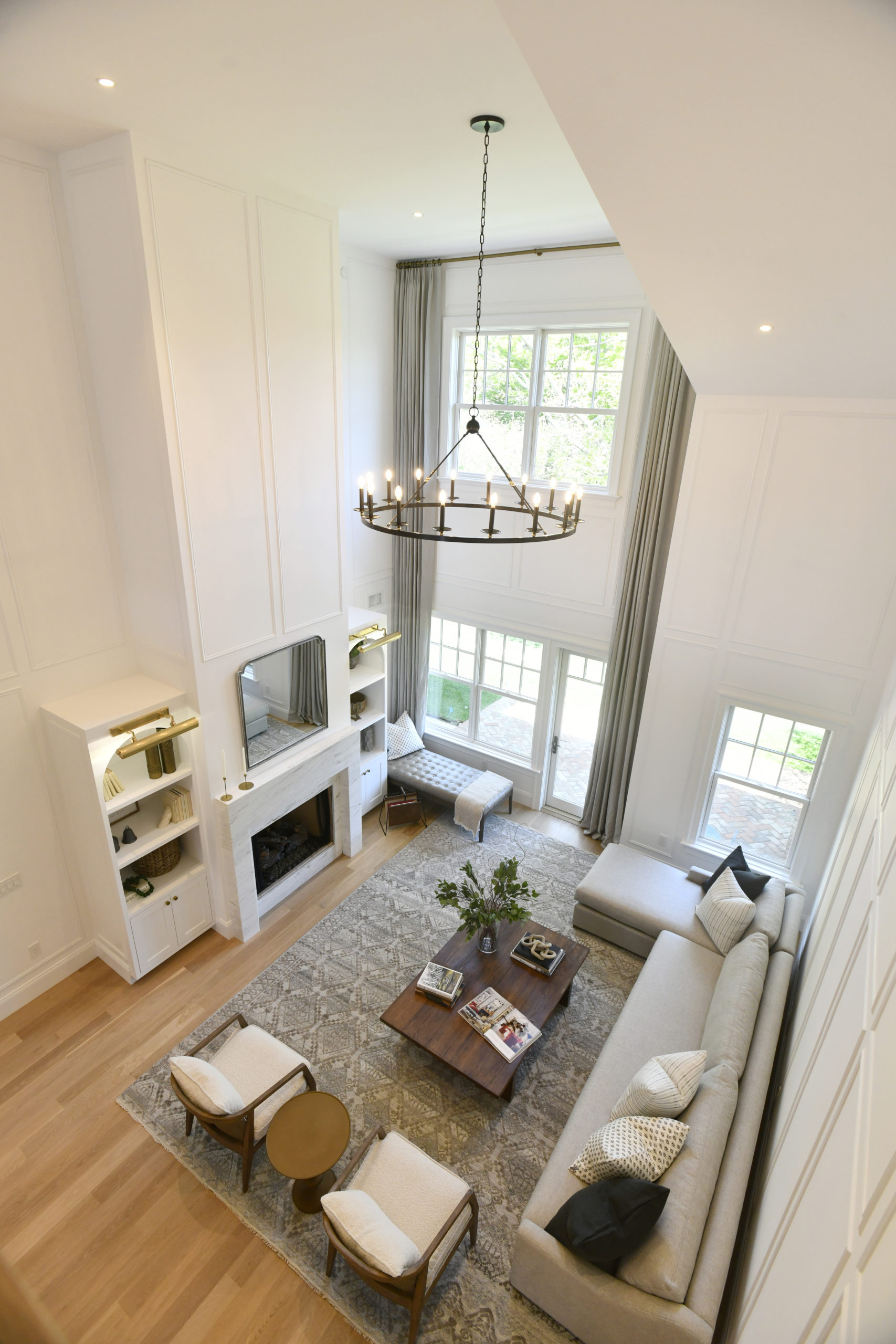 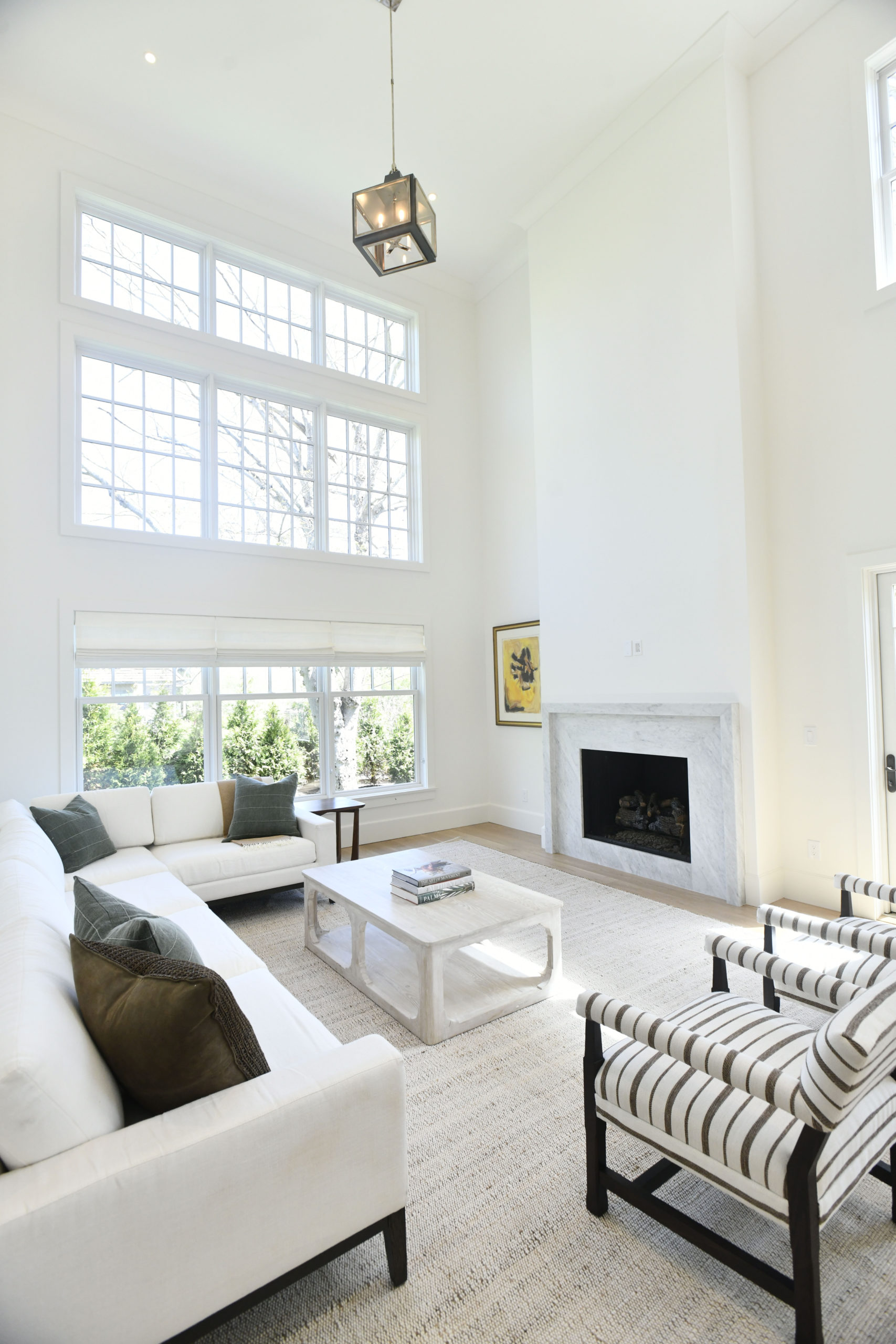 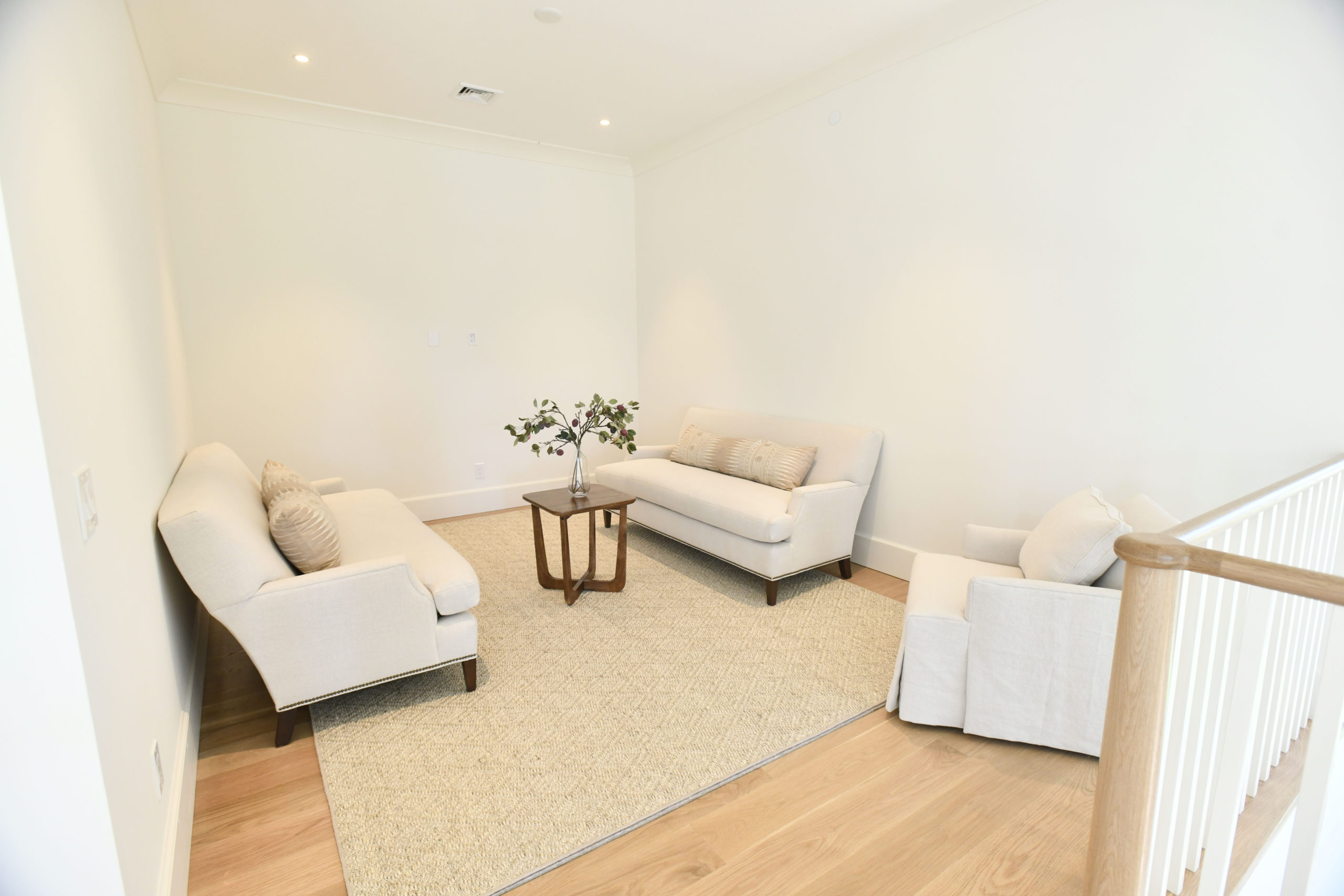 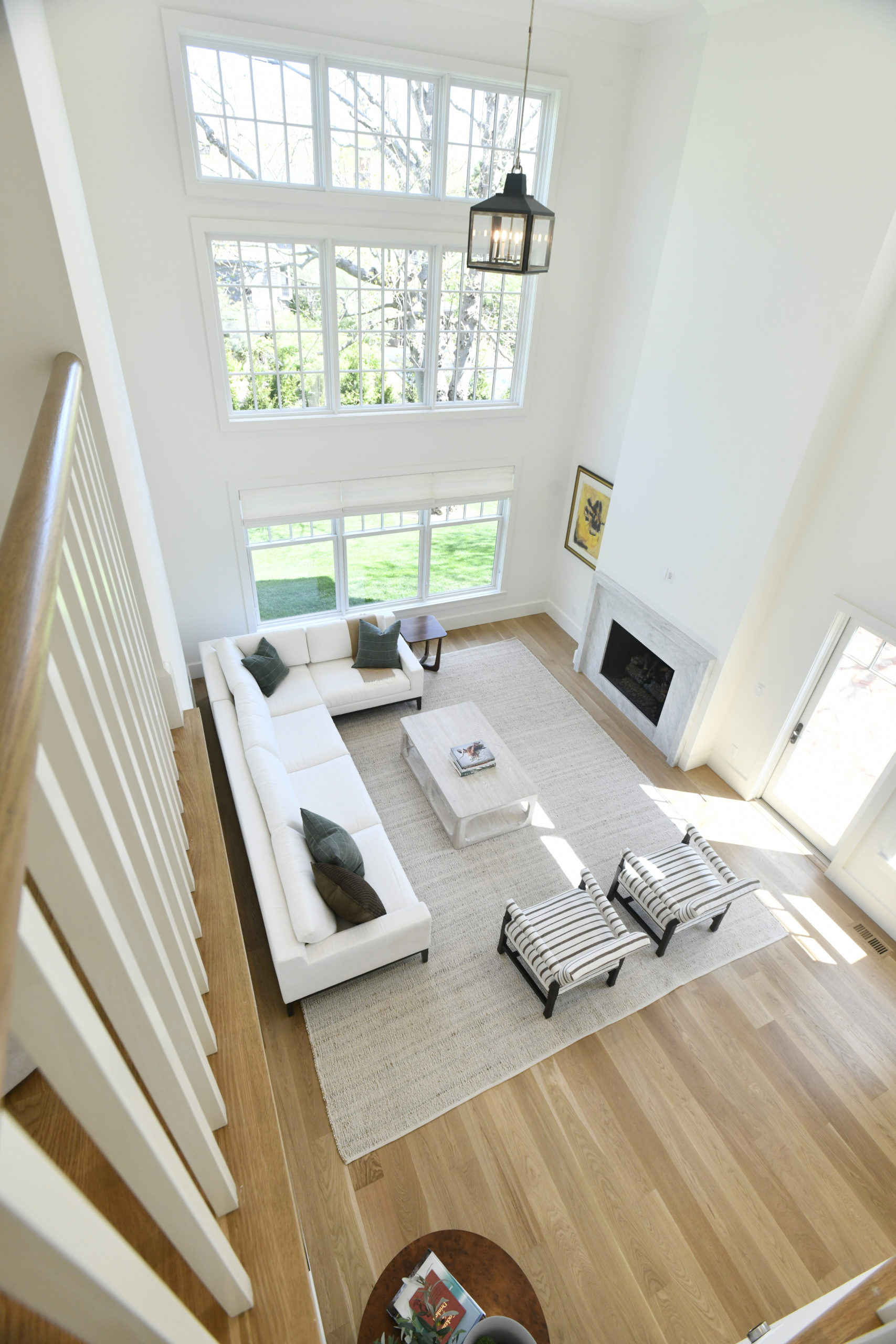 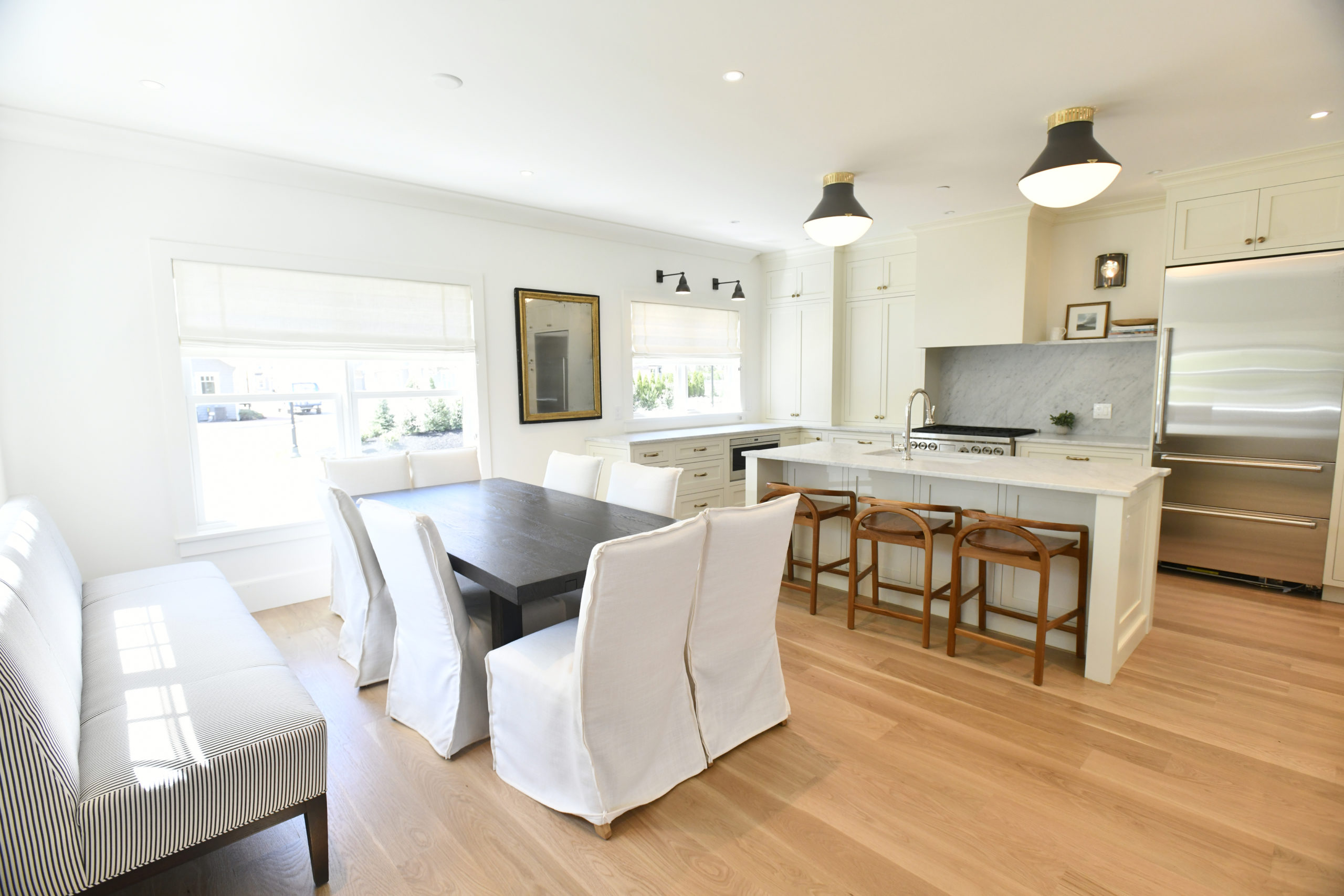 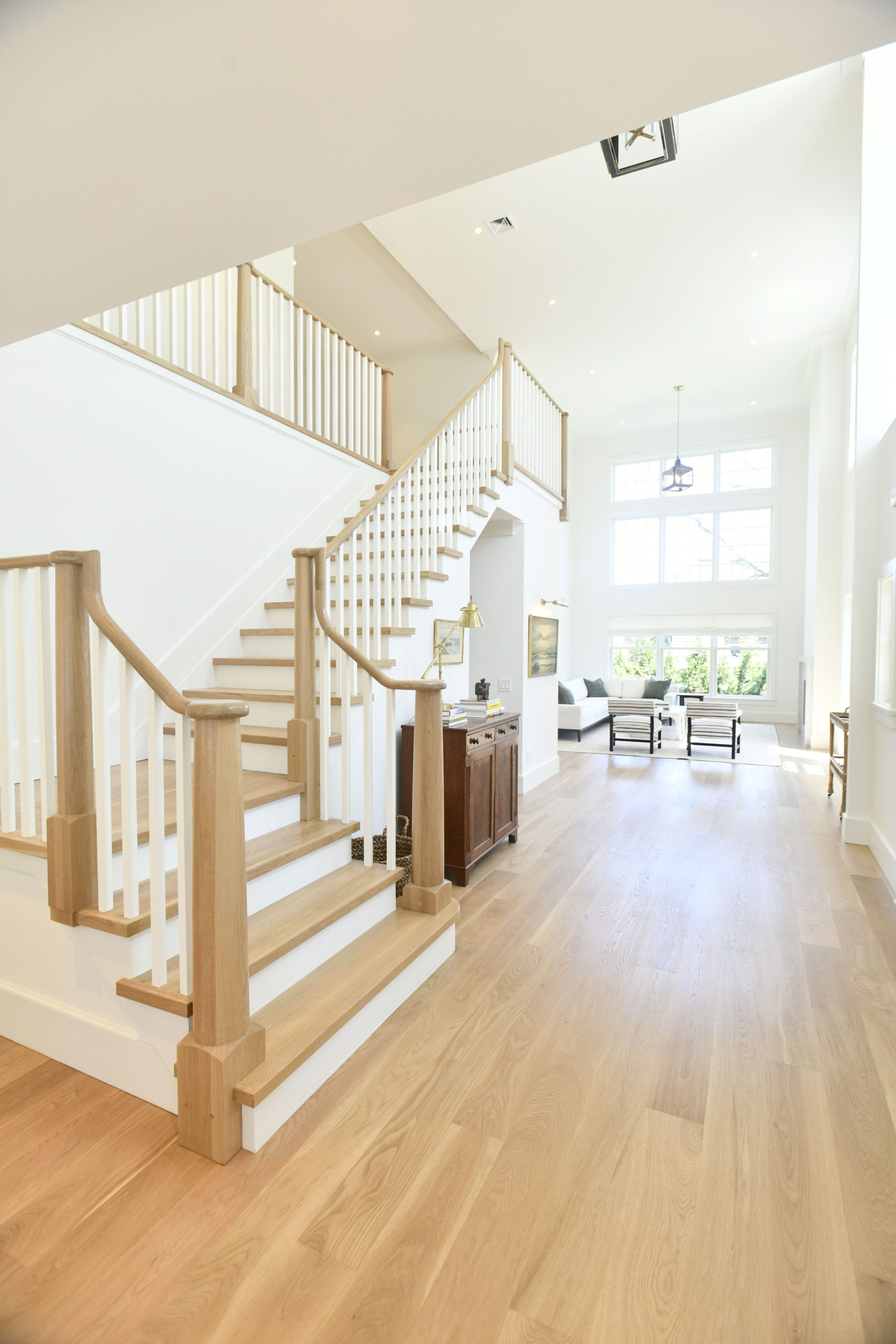 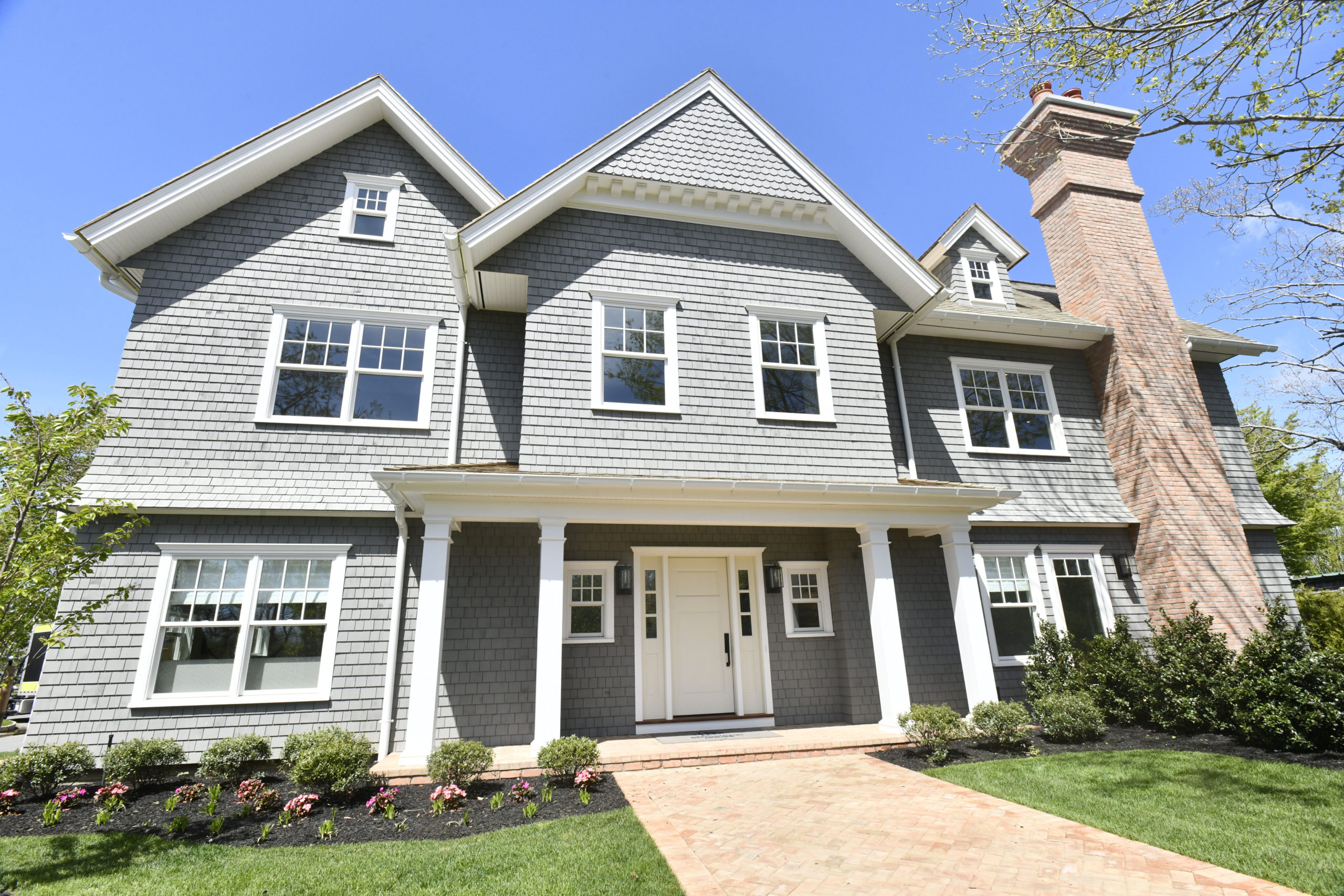 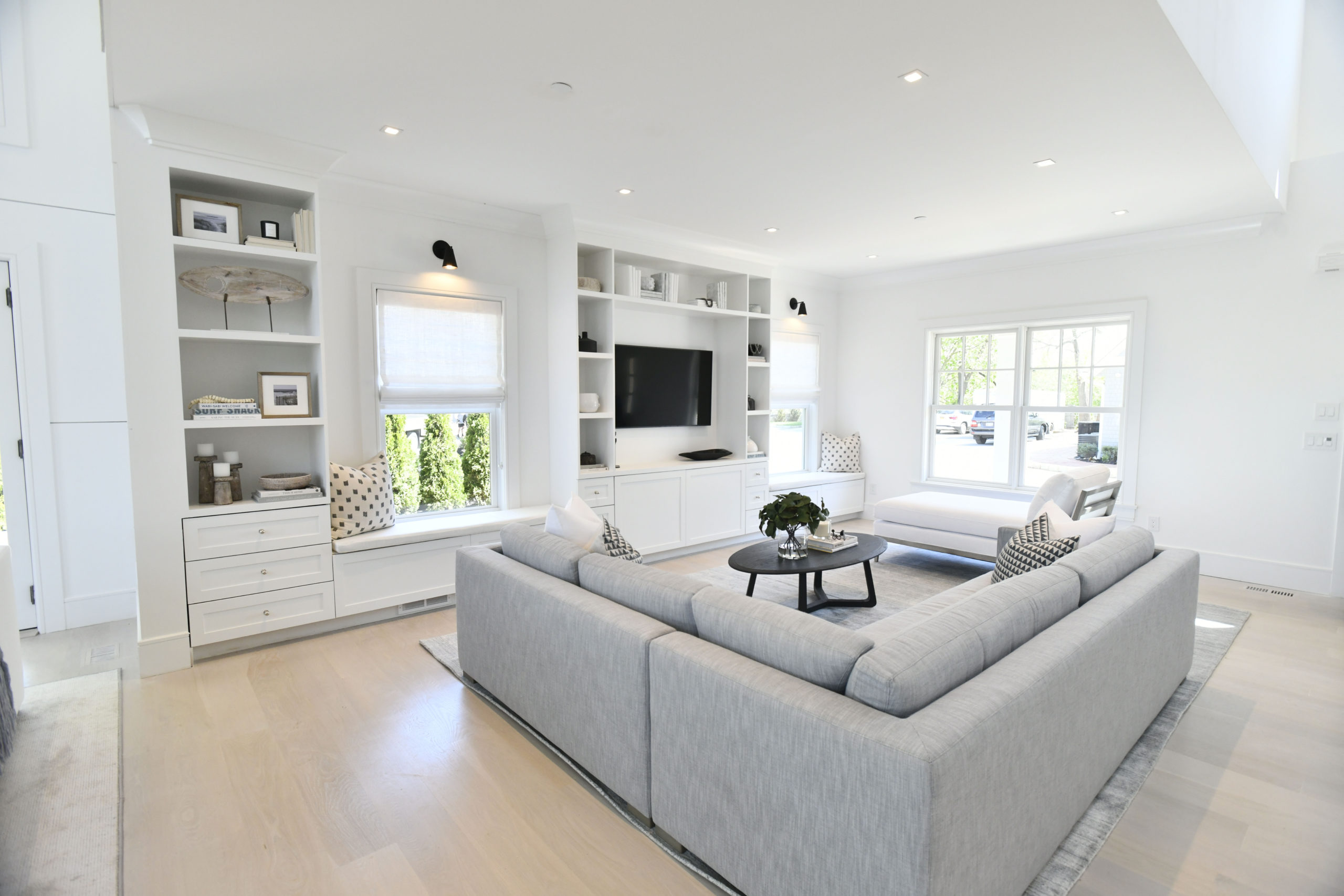 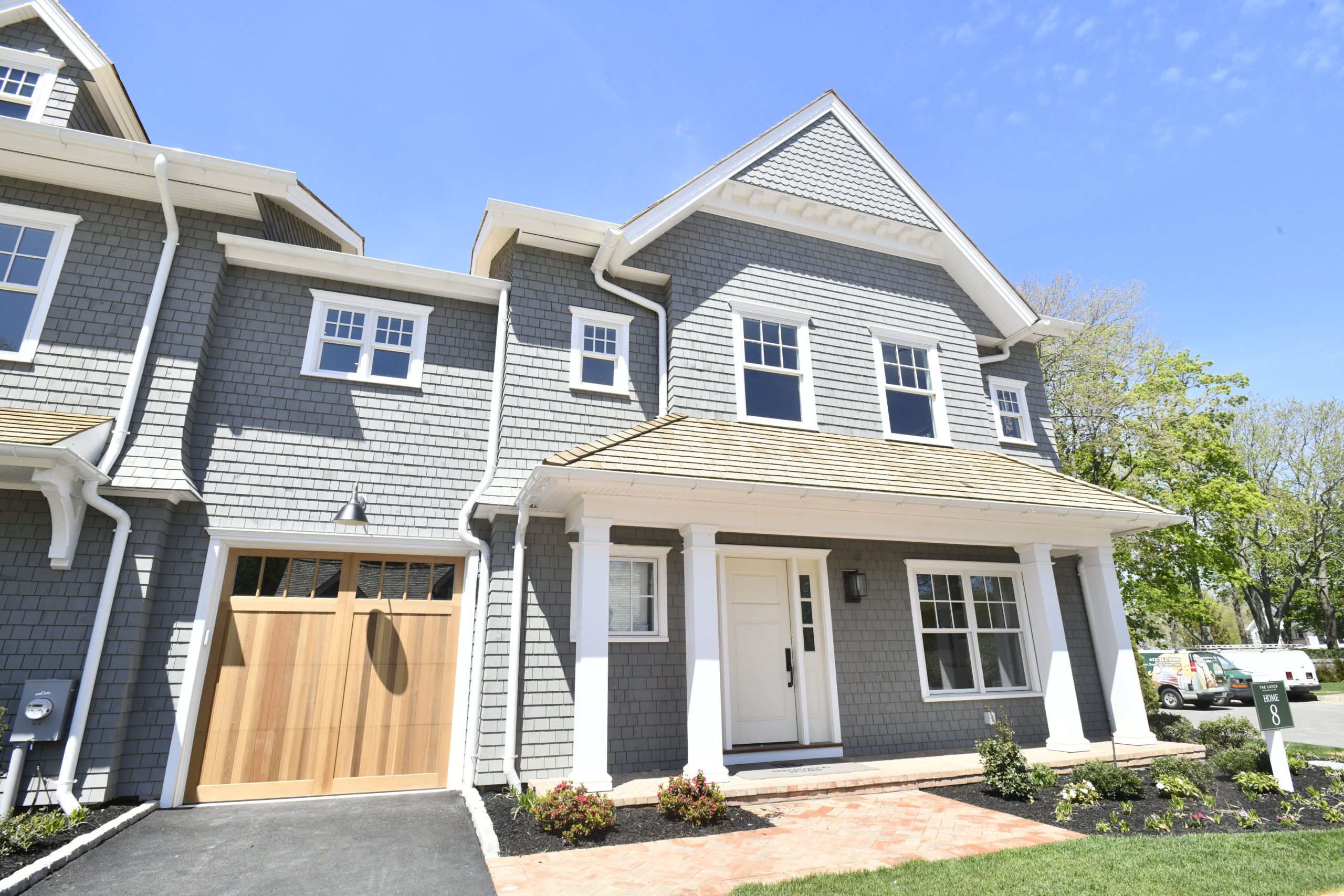 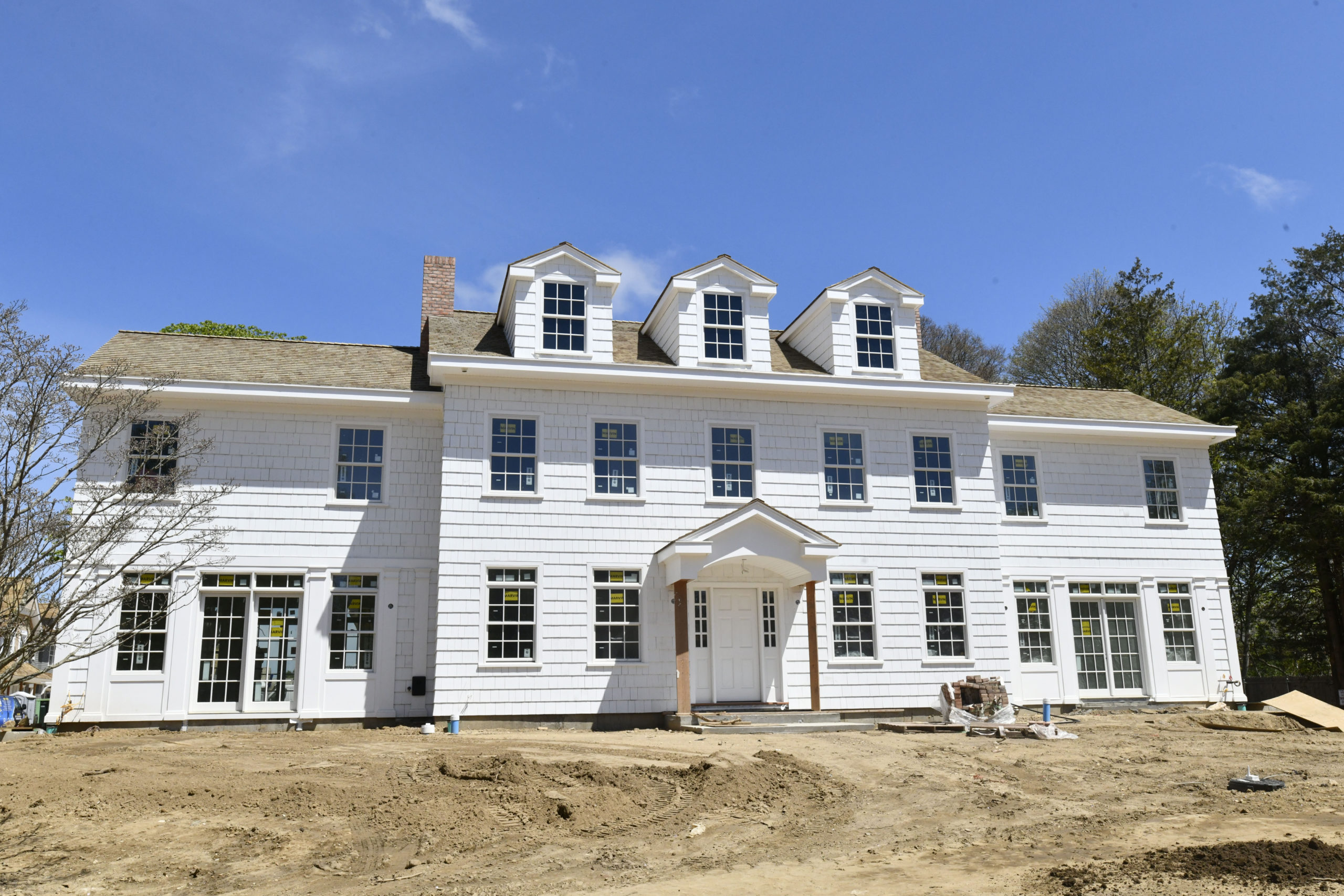 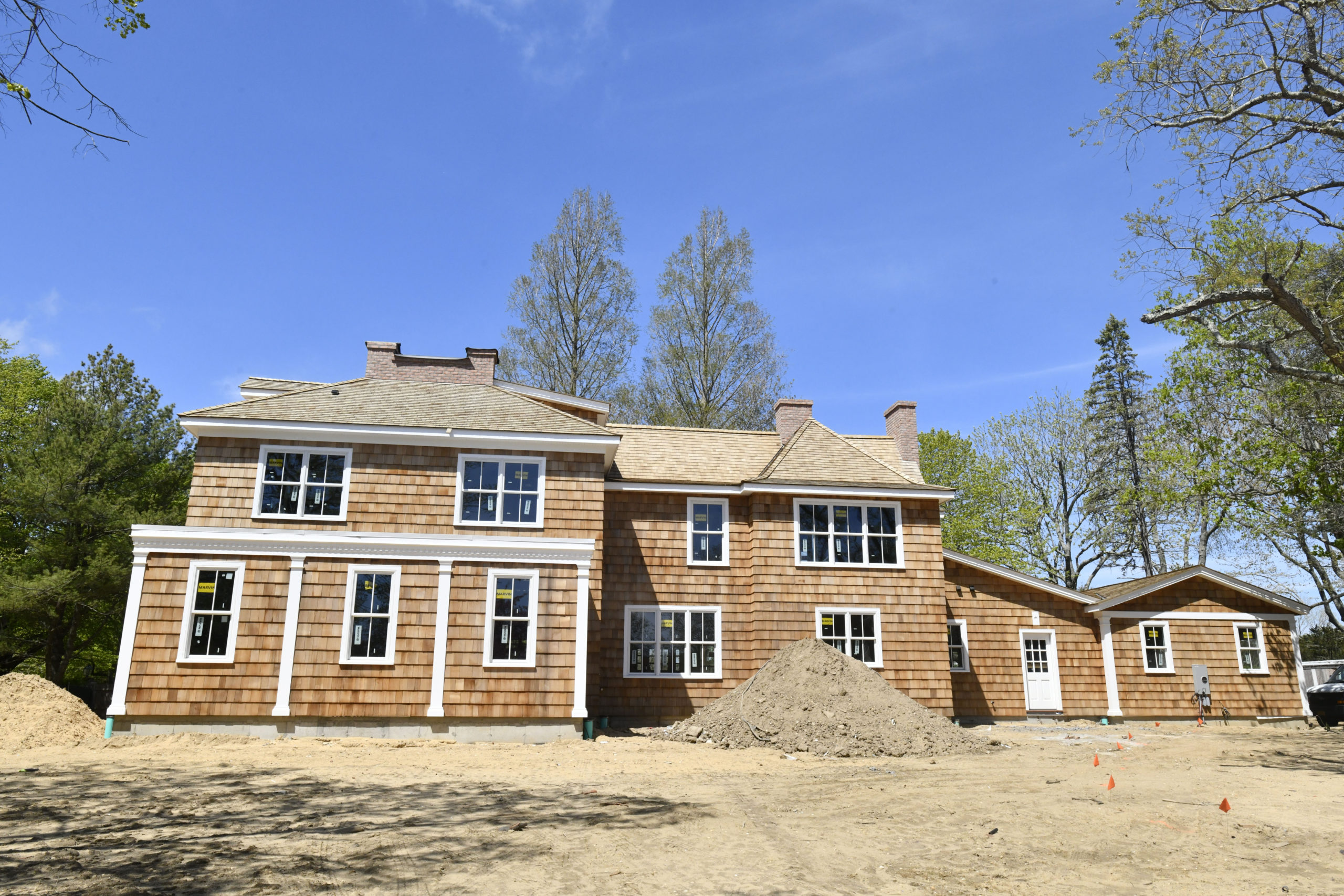 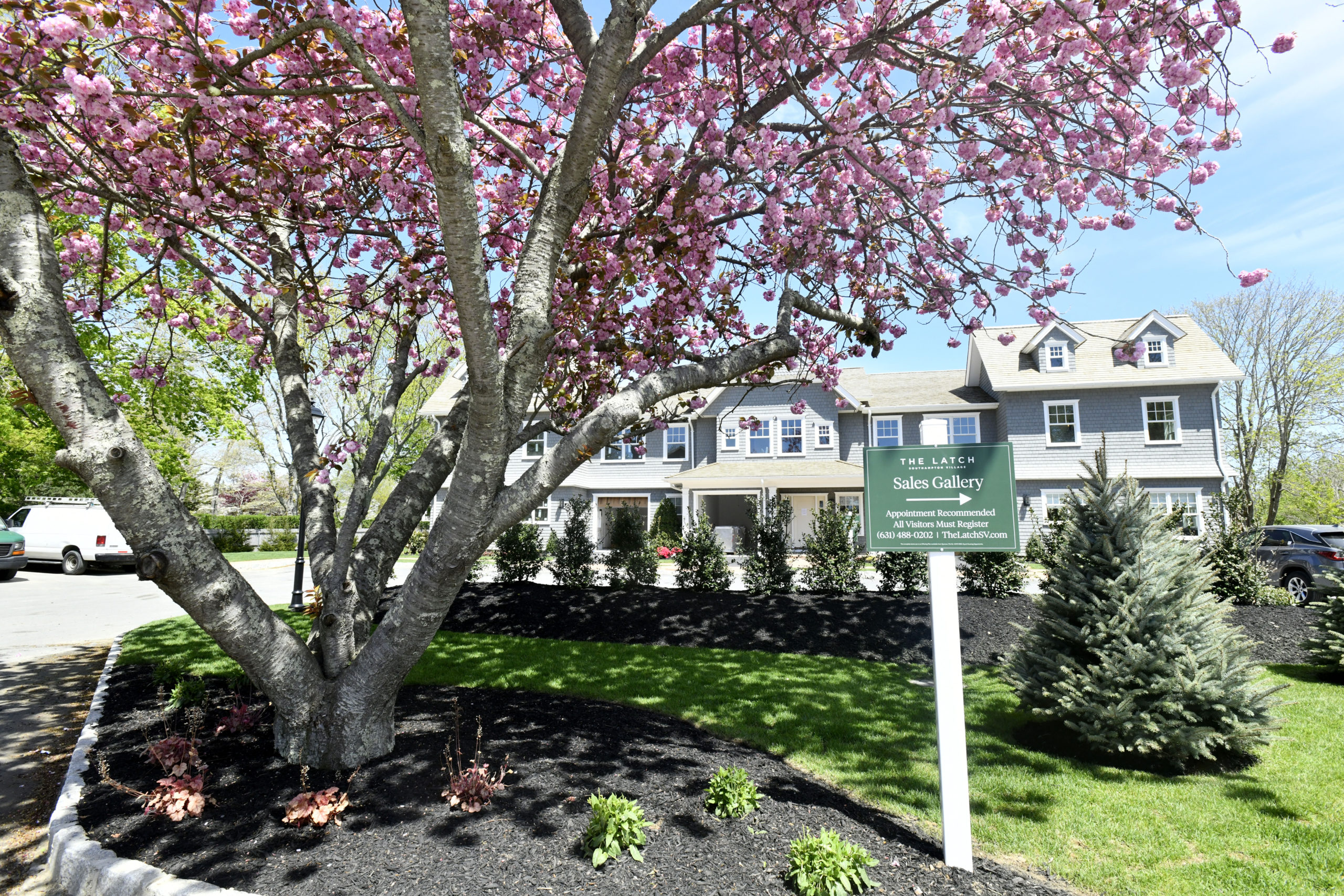 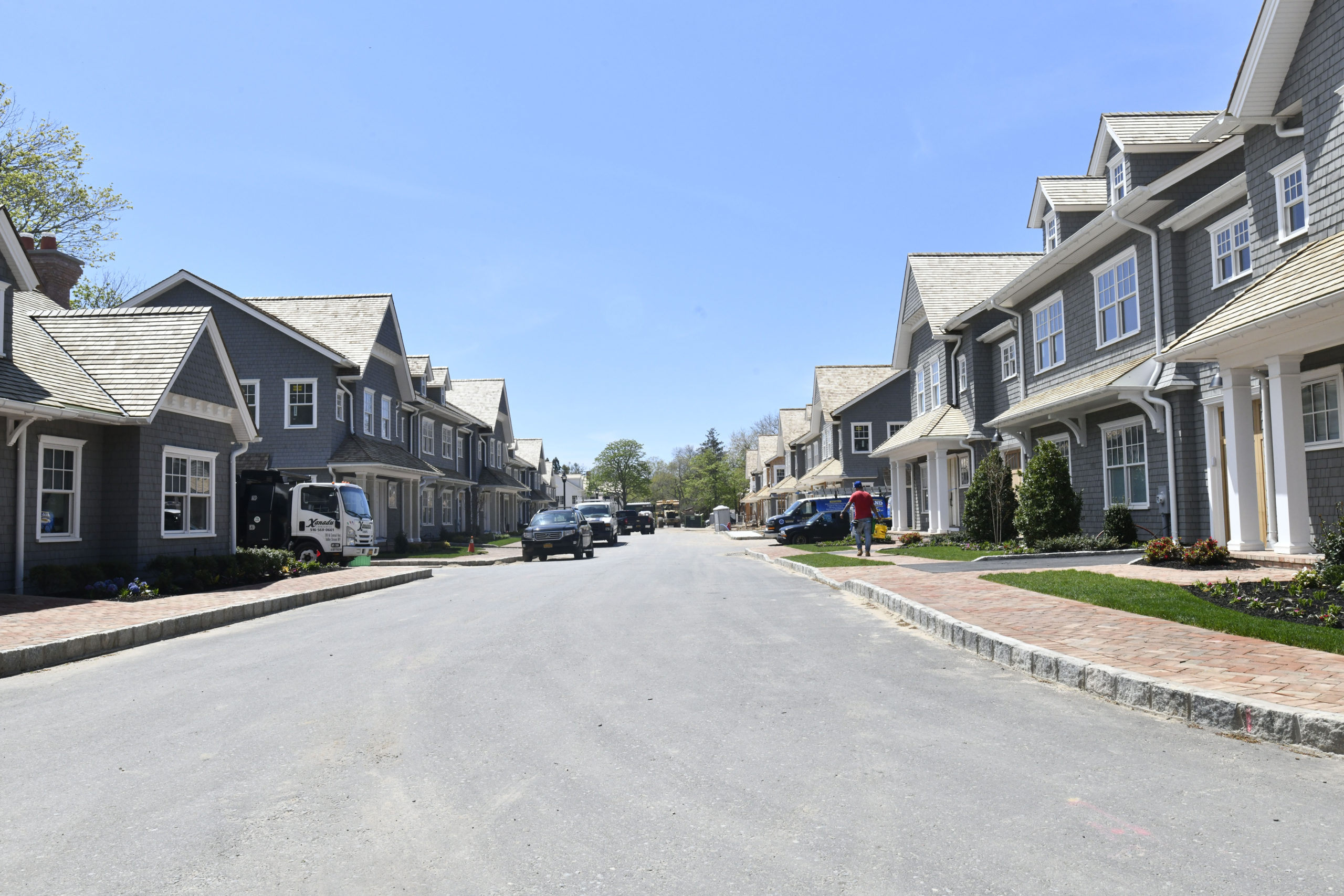 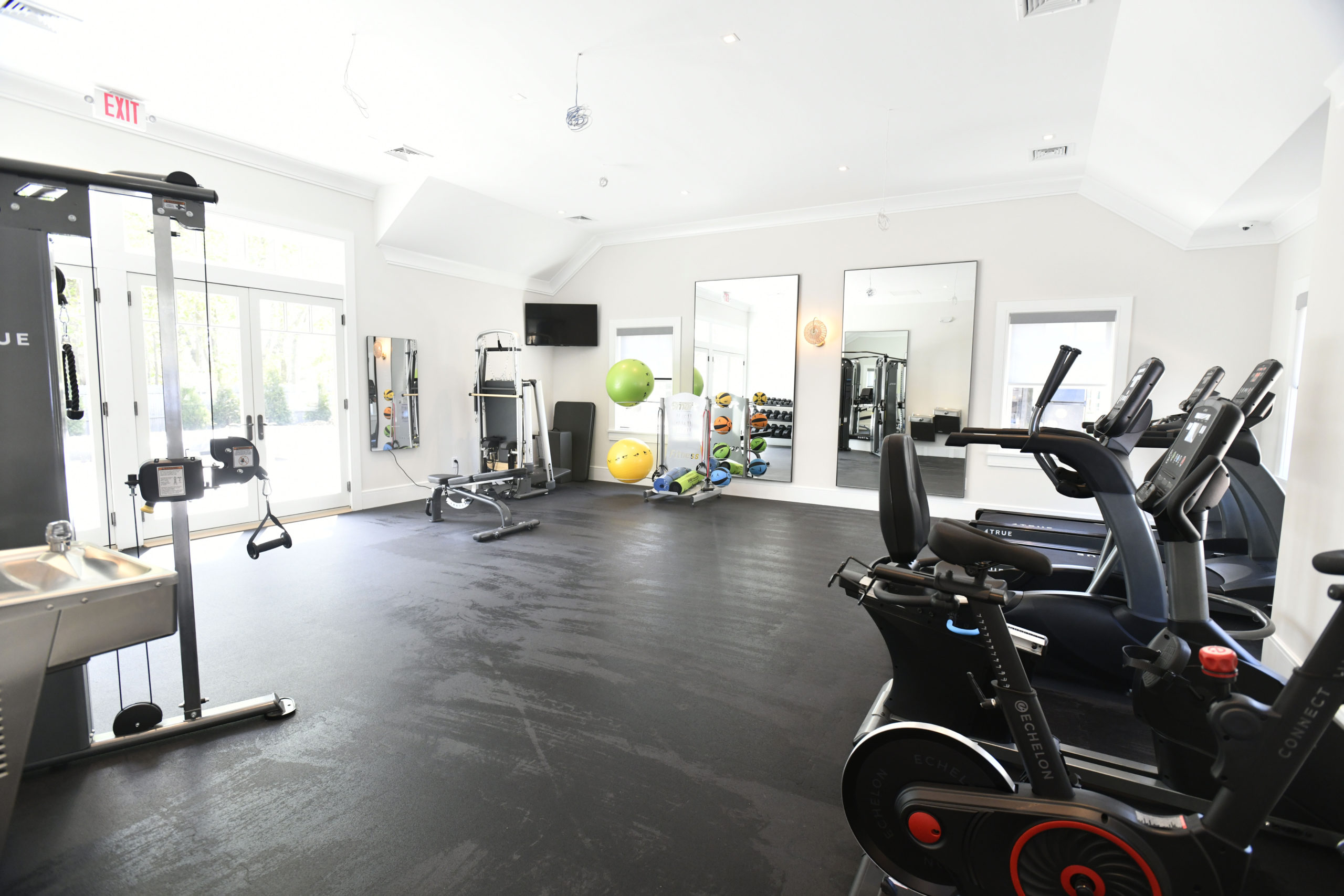 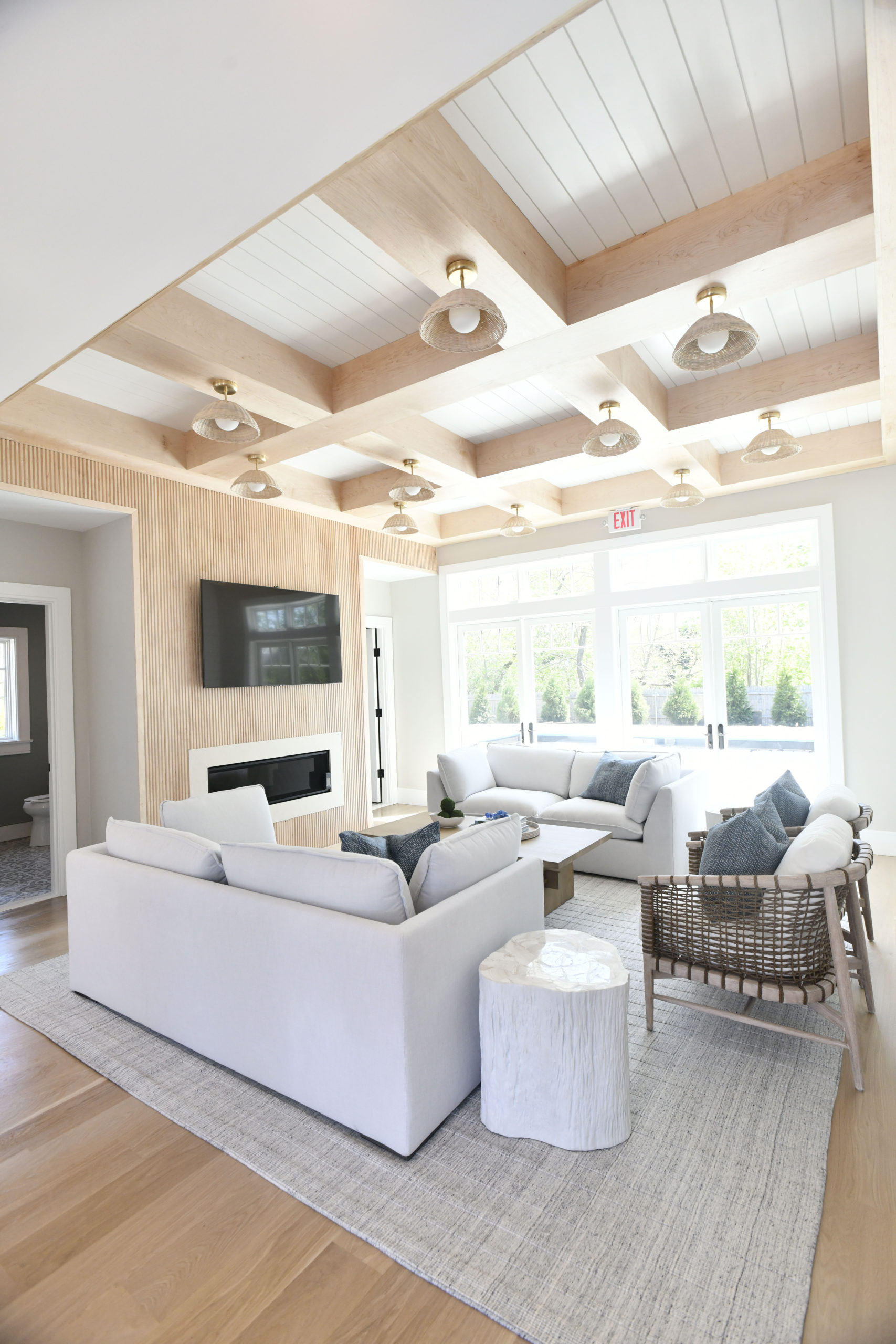 The common area in the Clubhouse. DANA SHAW

Nine units have already sold since preconstruction sales began last June, and now that construction is nearly complete, four designer-decorated model townhouses will be open for showings by appointment beginning Saturday, May 15, and the first occupants may move in starting in June.

The project by the Beechwood Organization, a Jericho-based development firm, is a mix of renovated historic buildings and brand new construction. The main Latch building and the Terry Cottage, both turn-of-the-20th-century structures by architect Stanford White of the renowned firm McKim, Mead & White, have been restored under the direction of Southampton architect Jason Poremba of Jason Thomas Architect. James McMullan of Fleetwood & McMullan Architects, an East Hampton firm, designed the new townhouses and villas and the community’s clubhouse.

Mr. Poremba explained during an interview on Friday that the Latch and the Terry Cottage had been changed significantly since they were built, and his challenge was to bring the exteriors back in line with how they appeared originally.

The structures were cedar shingled and painted white in the Federal Revival aesthetic with Dutch Colonial influences, though before Beechwood bought them in 2016 they were run down and with a number of alterations and additions that deviated greatly from the originals.

“What happened with these two buildings over a long period of time is they were just chopped up and altered and reworked in so many different ways that a lot of the existing detail — character — was not there any longer,” he said.

He noted that original windows had been replaced with 10 to 15 different styles of wood or aluminum windows, and porches had been enclosed in “a very haphazard manner.”

“A lot of the details that existed weren’t there, and certain additions that were done didn’t take into consideration the integrity of the existing buildings,” he said.

“I was actually trying to go back further than what people are familiar with,” he said, pointing out that the inn that people remember seeing for so many years did not reflect what the Latch had looked like earlier.

In his research at the Southampton History Museum and Rogers Memorial Library, he found postcards depicting the Irving Latch and the Terry Cottage as they once were, and those postcards confirmed that a lot of the character had been stripped away or altered.

“I knew something was wrong there, and I was able to rebuild the building through photos,” he said.

Exploratory work during the demolition of the interiors, which had none of their historic integrity intact, also revealed evidence of the original structure and placement of the windows, which correlated with postcards and photos, he said.

He credited local building supply yards with being well equipped to create custom trim and moldings to match historic details, though he added that much of the millwork needed to match the originals were readily available designs found in catalogs.

While the exteriors were brought back to their original looks and grandeur, the interiors were reworked. The Latch was altered from a 40-room structure into just two townhouse units. The Terry Cottage is now a six-bedroom, 6.5-bath single-family home with 7,385 square feet of living space, a garage and a pool on a shy acre.

Mr. Poremba said Steven Dubb, the principal of Beechwood, put him to task to find the historic imagery and do it right, making sure the Architectural Review Board would be pleased. Rather than looking for the cheapest and quickest way to get things done, the goal was to take the time to do it right — and it shows, he said.

Mr. Poremba worked with Zach Studenroth, the village historian, to confirm what parts of the structures should be retained and what parts were noncontributing additions that could be removed or altered. Based on that feedback, he redesigned the rooflines of the less appropriate additions to be more consistent with the original design.

“It’s just wonderful to see it all come back to life,” Mr. Poremba said. “It’s really great, and it’s, in my opinion, a success — a success for the village, for Hill Street, that whole approach into the village.”

Though the new townhouses and villas are set behind the historic structures where they will not be readily visible from Hill Street, the designs are still very much in keeping with the area.

Mr. McMullan said the intent in designing the townhouses was to take on the forms of the Terry Cottage and the Latch so they stayed cohesive with the neighborhood and the Southampton vernacular, from the finishes to the columns.

The columns are an original Fleetwood design, he said, and while they are not 100 percent historic, they do play off historic houses of Southampton. Other architectural details were taken from the neighborhood, like the gable ends, the windows and the shingles.

“Obviously, it’s kind of hard to do that when some of these units are three wide,” Mr. McMullan said. “But we really tried to keep it more towards the residential look than say like a condo or a complex. It was a little different approach, but I wouldn’t say that it was something awkward or hard for us to do.”

For the clubhouse, the firm had free rein.

“They already had a program of what they wanted in the clubhouse, but they gave us total freedom to design what we thought blended in best with some of the condo units and the whole development,” Mr. McMullan said. “… They were really great about working with us and giving us kind of that free range to run with it.”

The clubhouse has a fitness center and an outdoor pool among other amenities.

Architecture and design studio Sugarhouse, which Ms. Nahon founded with husband Jonathan Nahon in 2016, has designed a number of homes in Southampton, East Hampton and Sag Harbor, but what brought the firm to The Latch Southampton Village is the fact that Ms. Nahon designed Mr. Dubb’s Manhattan apartment.

She said her assigned townhouse is a quintessential Hamptons shingle-style house on the outside, and she had 5,000 square feet and three levels to design clean, fresh, comfortable spaces.

“Steven is a very great client,” she said. “He just asked us to design something elegant that would speak to the clientele that they expected to attract.”

She envisioned weekenders and retirees looking for a relaxed atmosphere. “From there, that really informed the way that we space planned,” she said.

There’s a staircase in the formal foyer up to the guest bedrooms, a media room and a library. On the main level, she designed a living and dining room, a family room and a master suite.

Ms. Nahon said she thought of a home for entertaining multiple generations of a family, with a large living and dining space, and also smaller, more intimate spaces to peel off to. “We wanted the house to be able to accommodate those types of gatherings and not feel like one enormous open space,” she said.

Sugarhouse designed the townhouse almost two years ago — before the pandemic — so it was just a fortunate coincidence that the concept emphasized intimate spaces.

“We’re pretty lucky that we designed it in a way that it wasn’t just one big open space so if you had a Zoom call you would hear it clear across the house,” she said.

She said a common theme throughout the house is the use of natural materials, like marble and wood, and a mix and match of vintage furniture with newer upholstery. She explained the idea was to create the feeling of a family home with heirloom items that have been passed down from generation to generation.

“It’s going to probably make you feel very comfortable as soon as you enter,” she said.

The designer-decorated townhouses may be purchased as-is, while the other units can be outfitted with custom kitchen cabinets, marble or quartz countertops, marble or porcelain bathroom tiles and designer fixtures. Standard in every unit is 5-inch-wide oak plank flooring, which can be stained in custom colors.

“What we’re doing at The Latch is very special,” Mr. Dubb said in a statement. “We believe the new homes, including ones being preserved in historic structures, will be found by their new owners, neighbors and the village to be deserving of their Hill Street location.”