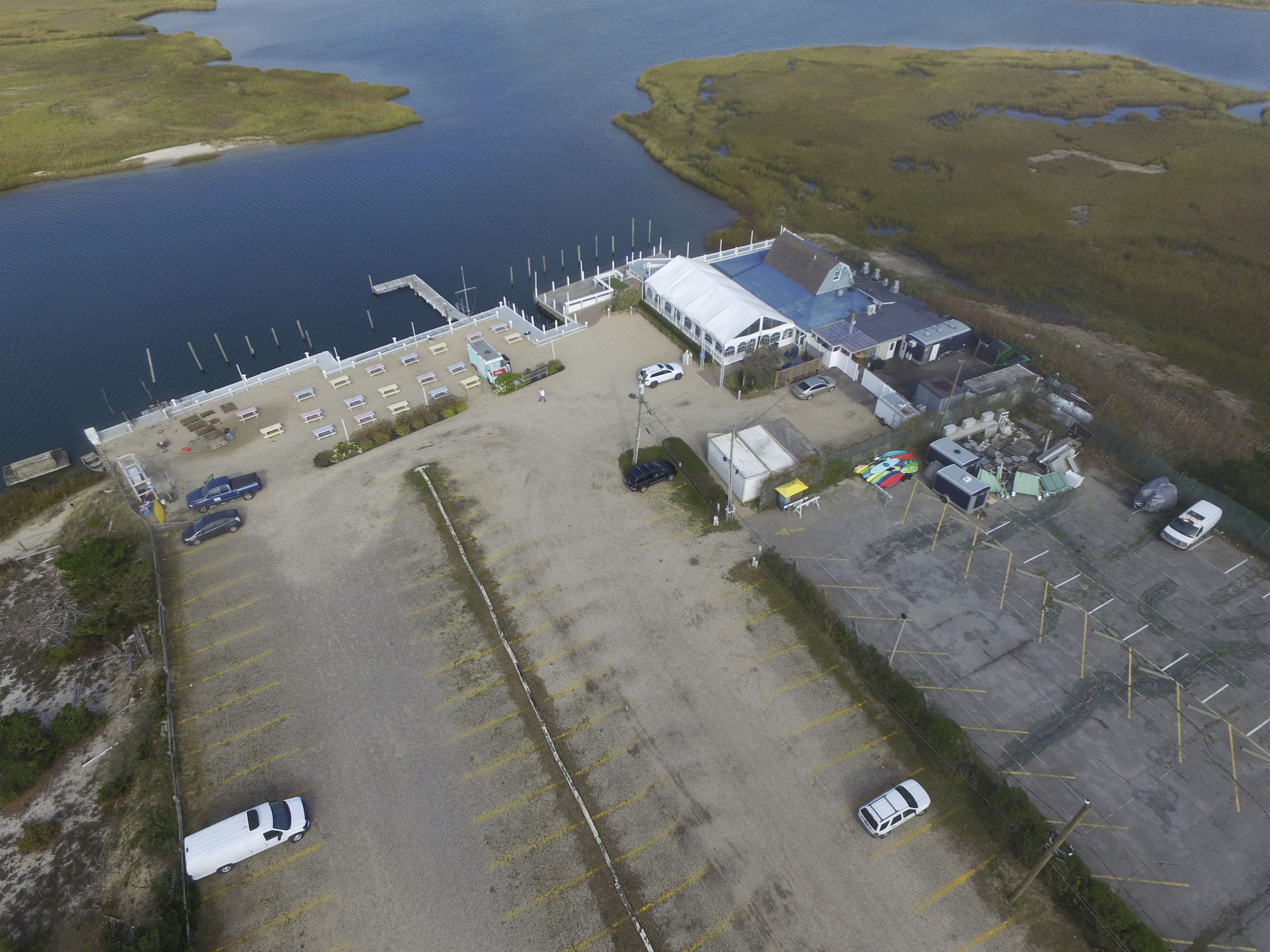 The owners of the property in East Quogue where Dockers Waterside Marina & Restaurant has stood for three decades are seeking approval to build a condominium complex in the restaurant’s place.

The owners of the 8.6-acre property in East Quogue where Dockers Waterside Marina & Restaurant has stood for three decades are seeking approval to build a condominium complex in the restaurant’s place.

The plan calls for 25 condo and townhouse units plus a swimming pool, a wood deck, a 12-foot-by-20-foot cabana, a sewage treatment plant, and a walking path to the existing floating docks, bulkhead and dock. Because the property is in a low-density residential zone, the owners are asking the Southampton Town Planning Board to approve a change-of-use application.

The majority owner is James Bozart, who bought the property in 2000, and the minority owner is Larry Hoffman, who founded Dockers 31 years ago and became a stakeholder in the landlord corporation, 94 Dune Road Holding Corp., when Mr. Bozart purchased it.

Back in 2013, Mr. Bozart put the property on the market with a price tag of $13.5 million, but it never sold. Mr. Hoffman said that he had discussions with Southampton Town three years ago about selling the property to the Community Preservation Fund. However, the offer that the town floated would not have been enough to pay off his mortgage, he said.

Mr. Hoffman said the dichotomy of the property is that selling it for its real estate value would be more profitable than continuing to operate a restaurant there.

“It’s very difficult to make money in the restaurant business,” he said. “It’s been a challenge between the weather, the road closures, storms, increases in operating costs like minimum wage. Five years ago we were paying $7 an hour. Now, next year we’ll be at $14 an hour for a 14-year-old to wrap napkins.”

Also considering costs for taxes, record keeping, insurance and customer entertainment, he said the profit margin has gone from 12 percent to 3 percent. He noted that in a year that the restaurant takes in $4 million in revenue, the profit is just $120,000.

“I tried to bolster the operating income of the business by building out the marina, staying open longer, opening earlier in the season, but those things didn’t really work out like I had wanted,” Mr. Hoffman said. “So condos seemed to be the best alternative use on the property.”

Sixteen years ago, he had sought to increase the number of boat slips in the marina from 12 to 60, to add a fueling station and to dredge the channel from Dockers to Shinnecock Bay. The Southampton Town Trustees told him that was too much, so he reduced the total number of boat slips by 10 percent, he said.

At 54 slips, the project was still too big for the Trustees’ liking. In the end, he dropped plans for dredging and a fueling station, and ended up with 34 slips.

The Southampton Town Zoning Board of Appeals had given its approval to the original 60-slip proposal, but residents at the Round Dune condos on Dune Road sued to overturn the determination, Mr. Hoffman said.

In 2014, that lawsuit was dismissed and a judge found that Dockers was entitled to 60 slips, a fueling station and dredging.

“As a guy in the community, I’m happy with what I built. I’m fine with it,” he said. “But, you know, somebody else who buys it may want to put a 60-slip marina in there.”

On the north side of Dune Road fronting Shinnecock Bay, the property is in the R-80 residential zoning district, which means that the minimum lot size per house is 80,000 square feet, or 1.84 acres. Technically, the 8.6-acre site could yield four single-family homes; however, it only has 3.3 acres of upland area while the remainder is 3.9 acres of wetland and 1.4 acres of surface water.

The existing uses include the restaurant/bar and the marina, plus an office, decks, tennis courts and parking. To change the use of the property to condos, the applicants need the Planning Board’s sign-off plus approval from the Southampton Town Zoning Board of Appeals. Because of the land’s location on the waterfront, a tidal wetlands permit and a pollution discharge elimination system permit from the New York State Department of Environmental Conservation are also required, and even more regulatory approvals and permits will be necessary.

In many cases, applicants try to convince regulatory boards that little review is required to conform with state law, and fights often ensure. In this case, Mr. Hoffman said he and Mr. Bozart volunteered to subject the application to a full environmental quality review. “We’re being very, very careful about the environmental aspects,” he said.

Though the old septic system is serviced, maintained and in good working order, the proposed on-site sewage treatment would greatly reduce the nitrogen going into Shinnecock Bay, according to Mr. Hoffman. “There are some negative environmental things going on that this project will cure,” he said.

He inherited the tennis courts, which he thinks were installed in the 1970s. They are located in the wetlands setback and will be removed under the condo proposal.

P.W. Grosser Consulting, an environmental engineering firm in Bohemia, prepared an analysis on behalf of the applicants and submitted the document to the Planning Board on October 27.

The firm reports that the applicants seek to raze the existing structures to replace them with 25 condo units spread among four buildings. The plan calls for 14 two-bedroom units and 11 four-bedroom units.

The existing development, including parking, is on 2.2 acres. The proposed development’s footprint would be a quarter-acre smaller. The firm noted that 40 percent of the upland area would remain in a natural state and that wetland restoration is planned.

The plan also calls for 78 parking spaces, including 50 spaces within garages, 26 spaces in driveways, and two on-street spaces. Only 56 spaces are required.

A recharge basin, dry wells, pervious pavers and stone swales are planned to address stormwater runoff of up to 3 inches of rainfall in a 24-hour period.

If the project is approved, construction is expected to be completed in one phase over 18 to 24 months.

“The whole thing is a process,” Mr. Hoffman said. “It’s gonna take years, years. So Dockers will go on, and I will continue to operate while this thing gets processed and/or litigated.”

P.W. Grosser Consulting notes that alternative plans for the property could be to leave it unchanged, sell it to the Town of Southampton at fair market value, or create a private yacht club.

“I’d love it if the town would just buy it from us and leave it alone,” Mr. Hoffman said, suggesting that it stay a restaurant and marina. “I did that avenue, and they really did not have an interest in doing that.”

He added that he understands that the town is not in the business of being a landlord to a restaurant and bar.