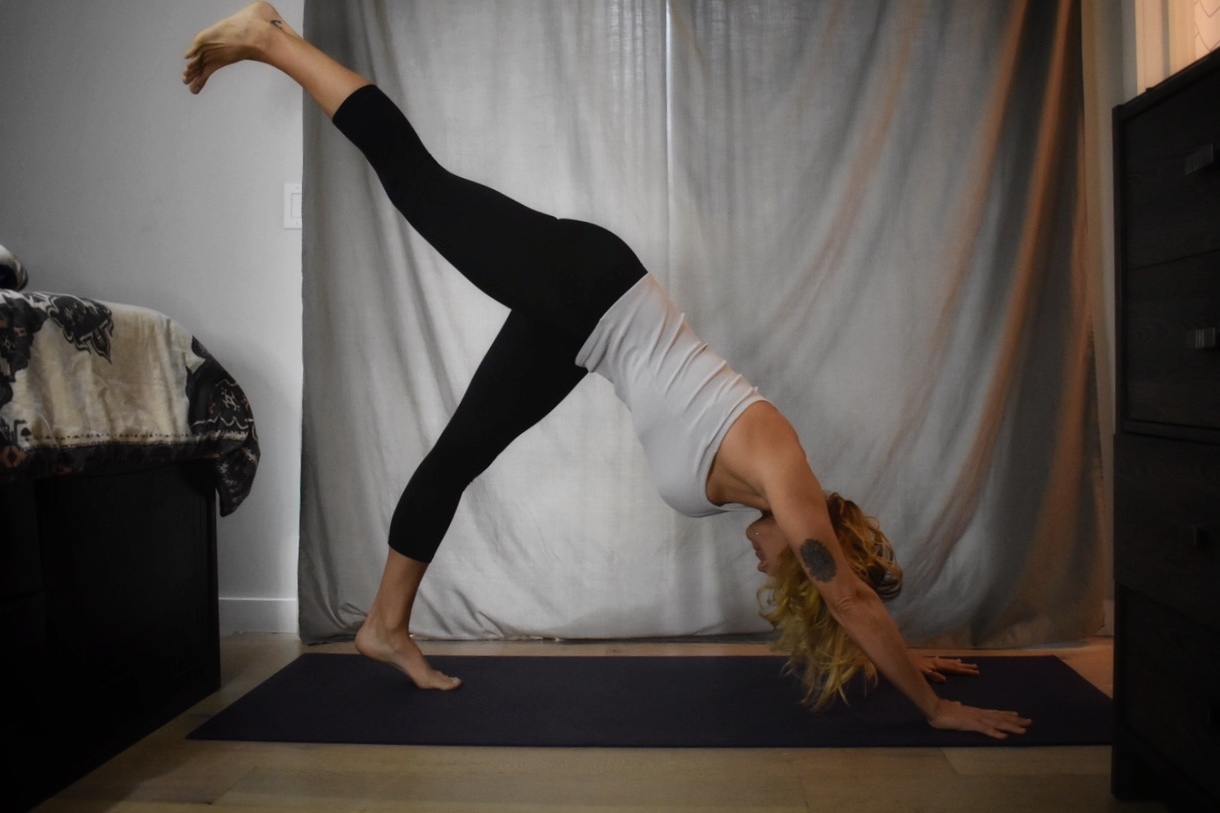 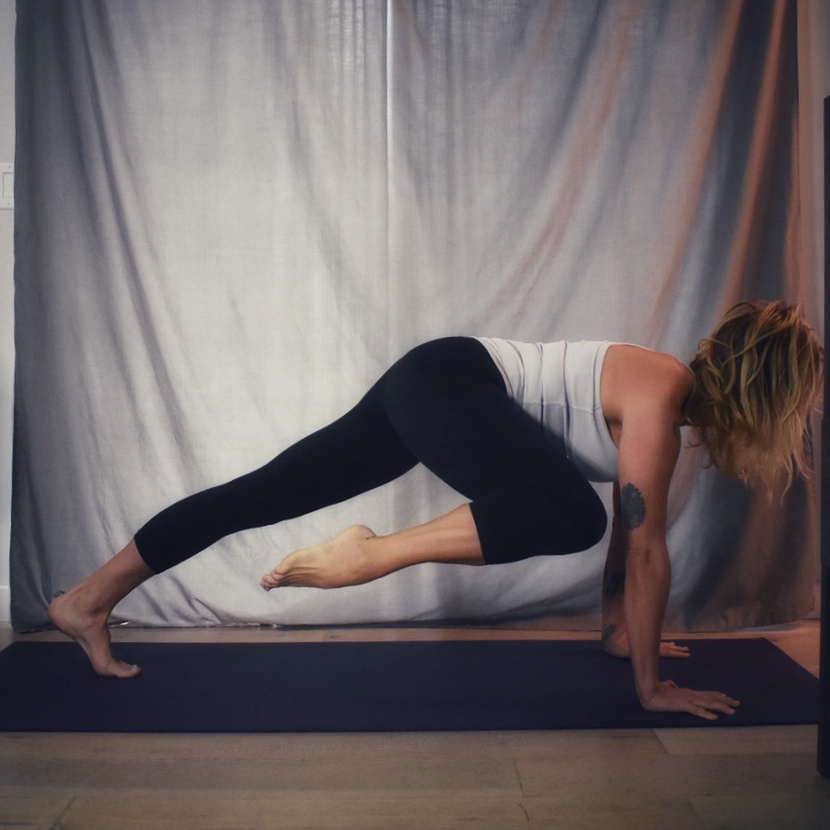 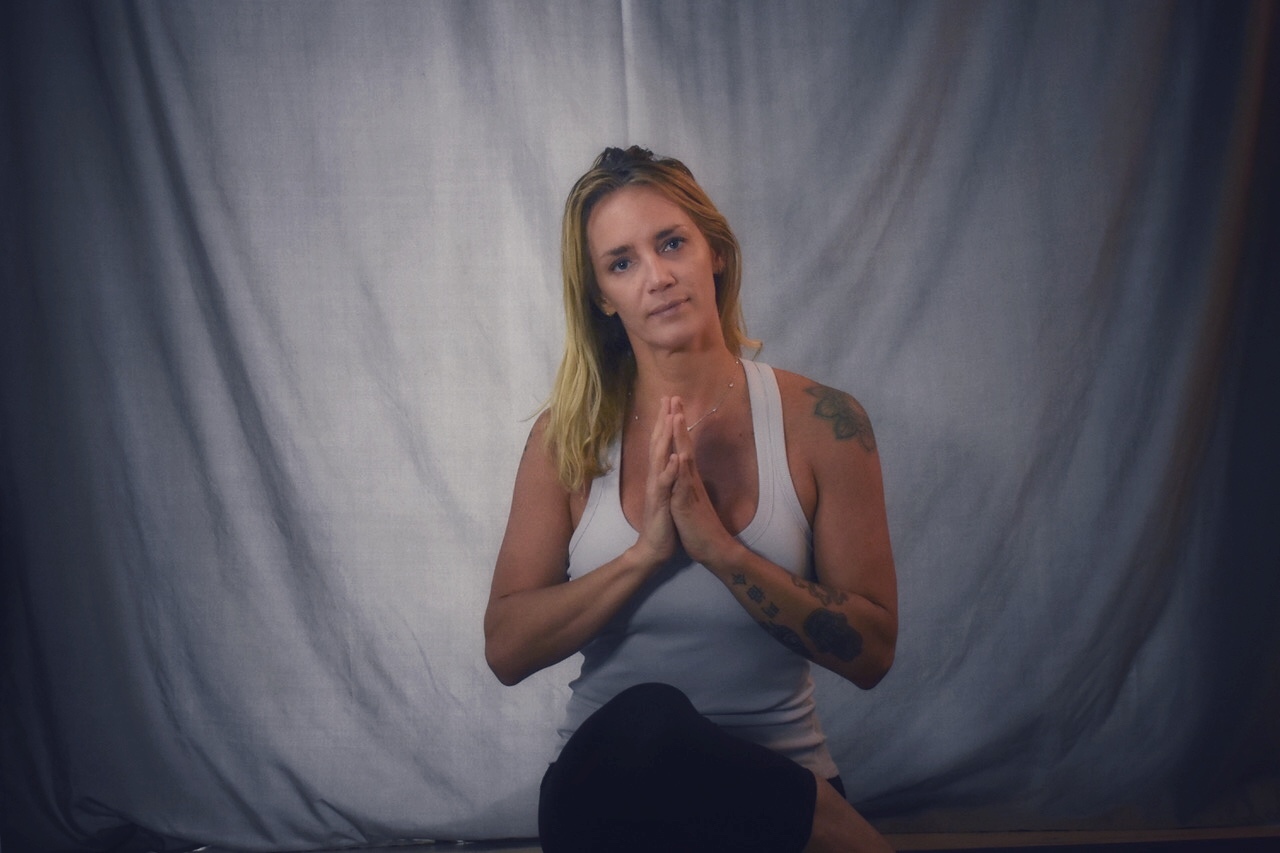 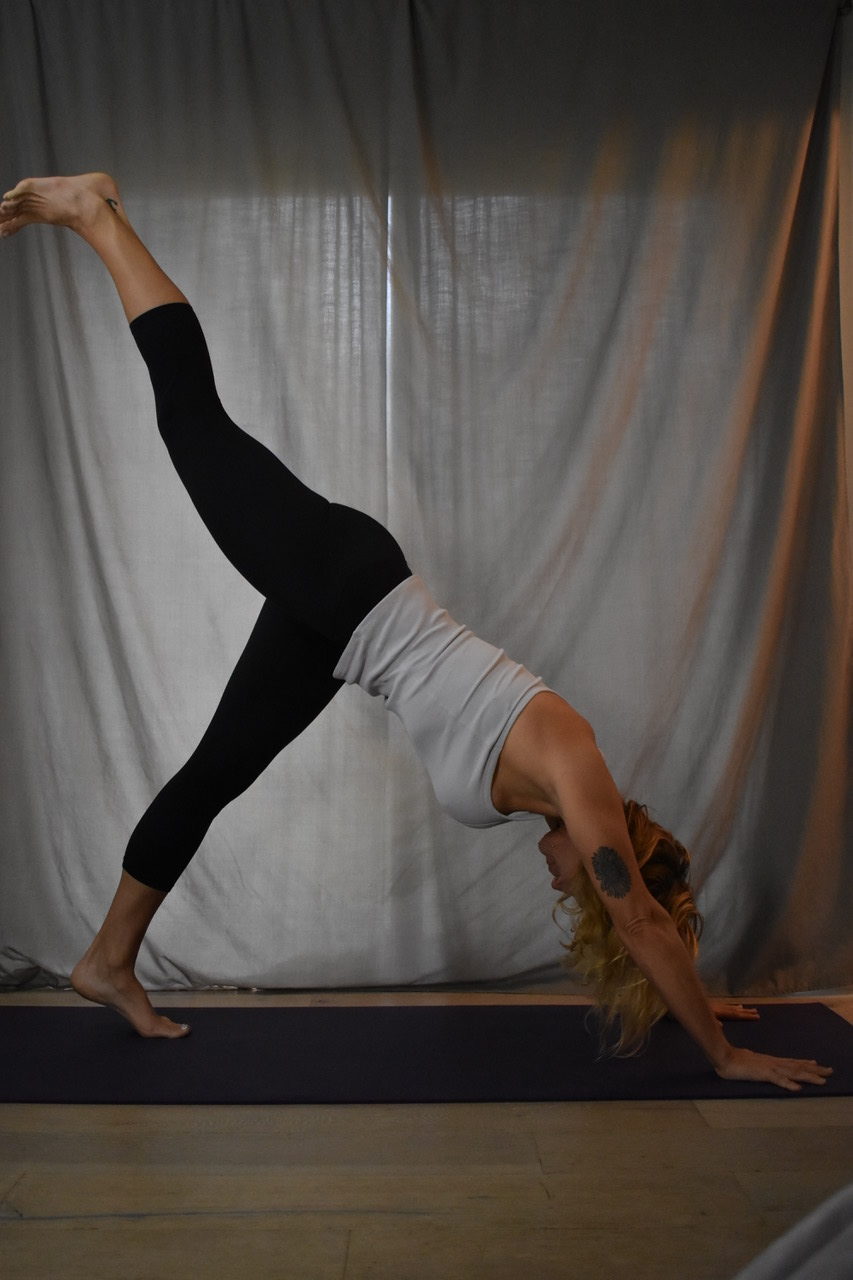 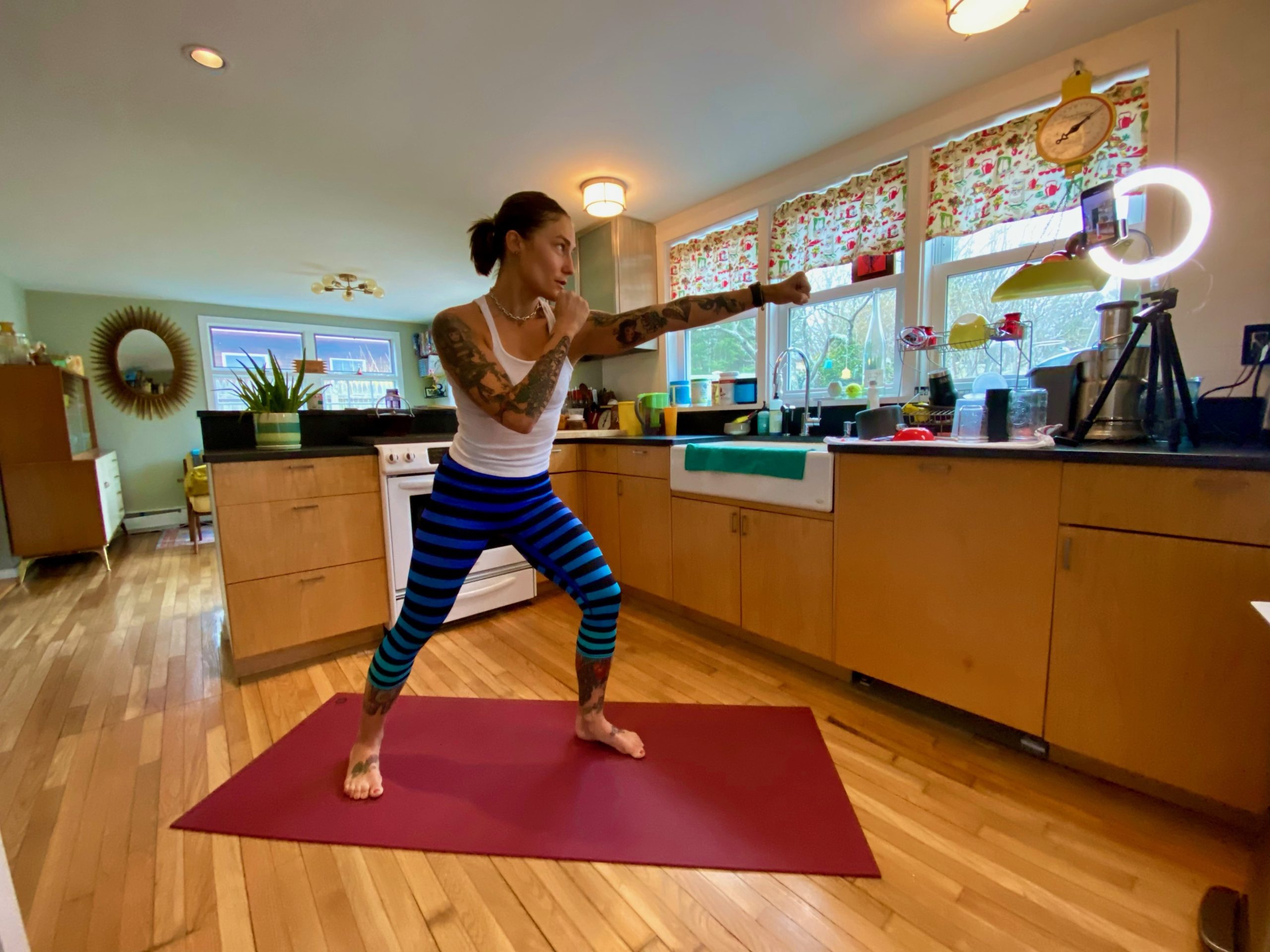 Samantha Duane filing her daily workout class at her home in Sag Harbor.

With her mat stretched out, Allison Burke began her yoga class Thursday morning — 9 a.m. sharp. But this wasn’t an ordinary class — it was Instagram live streamed (and free). It’s just one way the fitness community has transitioned in a time of social distancing and self-quarantining.

The myriad local gyms, studios, and cycling-classes that populate the East End have been forced to shutter their brick and mortar locations per Governor Andrew Cuomo — gyms throughout the state were forced to close by 8 p.m. on March 16.

And while the population of joggers, walkers, and surfers on the East End show how some are getting their fitness fix, many of the shuttered gyms have made a transition of their own: virtual instruction.

Ms. Burke, 38, a local yoga instructor, usually teaches both private and public lessons. “After this whole thing started, I just was really feeling kind of lost,” she said.

But Ms. Burke evolved, moving onto Instagram live. For the past week, she’s streamed 30 minute classes for free at 9 a.m. each day.

And they’re garnering a following: Ms. Burke noted 58 streamers on one video she ran.

“People were so thankful, just saying that any sense of familiarity to their normal life was really helpful for them,” she said.

Similar in style, Truth Training, a “strength based” training gym in East Hampton, started posting videos onto their YouTube channel on March 16. The gym also posted daily workout plans on their website.

Mandala Yoga Center in Amagansett, where Ms. Burke also teaches, started online classes on March 25. Mandala charges $20 to ‘drop-in’ on an online class, run off the Zoom platform, according to a post on their Instagram. Mandala plans to host up to four, usually 60-minute, online classes each day, their website indicated.

Virtual classes, Ms. Burke noted, presented some difficulties: “The most challenging part, especially doing it live, is that it’s live and I am out of breath sometimes and I really have to honor that.”

“For next week, I’m going to have like a full schedule, almost as if we had a group fitness schedule at the gym,” Rebecca Olender, 36, fitness director for Hamptons Gym Corp, said.

Samantha Duane has been streaming a daily workout, usually with her identical twin sister, each morning from her house or open public spaces in the East Hampton and Sag Harbor area, like Herrick Park, Morton Wildlife Refuge, even a nature preserve in Baiting Hollow when she was up island picking up organic chickens.

“I’m an active person and I wanted to do something with my friends who were into it, but also just as much for myself,” Ms. Duane, whose Facebook profile is Samantha Rambo Duane, a nod to her former days as a competitive roller derby athlete. “People don’t realize how hard it is to motivate yourself when there are a lot of outside stressors. Just getting on the mat and starting to go is half the battle and once you do it and it’s done you are super happy you did it. A personal trainer knows that.”

Just as she was about to transition from a part-time trainer and part-time bartender to a full-time trainer, the coronavirus closures hit both businesses. But Ms. Duane has pushed ahead with her daily instruction free of charge nonetheless.

The trainers at Hamptons Gym Corp, Ms. Olender, shared, aren't concerned with charging for classes either.

“We’re just kind of trying to stay sane and we really love being part of the community and being part of members’ lives,” she said, “and that’s what we’re trying to keep alive.”

For fitness-minded individuals who may not have the equipment at home, East End Row offers a unique solution: take one of their rowing machines home. In an email, East End Row said those who have unlimited memberships to its facilities may request to have one of their 40 rowers delivered to them.

Some gyms, however, have been forced to close without alternative. Hill Street Boxing in Southampton posted a temporary closing notice on its Instagram. All of its studio classes have been cancelled.

For Ms. Burke, a newfound appreciation of technology has come from social distancing and online workout classes.

“For so long, I was anti-technology as a yoga teacher,” she said. “I’m like, ‘All this is doing is isolating us worse.’ And now that we have to be isolated, I have to rely on it … The technology’s actually good for us.”

A TikTok post by a Westhampton Beach High School sophomore, showing her sitting during the ... 21 Apr 2021 by Desirée Keegan

What’s The Buzz? A Celebration Of Legal Pot In Sag Harbor

Shall we dispense with the clichés first? No, the air was not heavy with the ... by Stephen J. Kotz

Unease, fueled by rumors that well-heeled supporters of Bay Street Theater have been quietly snapping up real estate in Sag Harbor’s business district with plans for a major redevelopment project, continued to grow in the village this week. That wariness has played out in dueling phone-call campaigns to Mayor Kathleen Mulcahy, a flurry of letters to The Sag Harbor Express, discussions on Facebook, and finally, announcements that both the Village Board and Friends of Bay Street, the not-for-profit formed to find the theater a new home, would hold public forums on the subject in the coming weeks. The Village Board ... by Stephen J. Kotz

When Kelly Dennis was a third-grader at Our Lady of the Hamptons school in Southampton, ... by Cailin Riley

More than two dozen letters from families and friends of Southampton Youth Association flooded the Southampton Union Free School District Board of Education earlier this month — over, what turned out to be, a false alarm. Every year, the district serves as an intermediary between the Town of Southampton and various organizations, including SYA, that petition the Board of Education to place a proposition on its annual budget ballot. It asks voters to approve their individual budgets, in order for the town to collect the approved amount through taxes. And word circulated that SYA’s placement on the ballot was in ... by Michelle Trauring

In an average week, Janet Barr jabs, hooks and crosses her way through three Rock ... 14 Apr 2021 by Michelle Trauring

People who have lived in Sag Harbor for more than 20 years might remember when ... by Stephen J. Kotz

The Man Behind The Van: A Look Inside The Interlibrary Loan System

Tyrell Jasper closes his eyes, leaning back in the driver’s seat as an audio book ... by Michelle Trauring