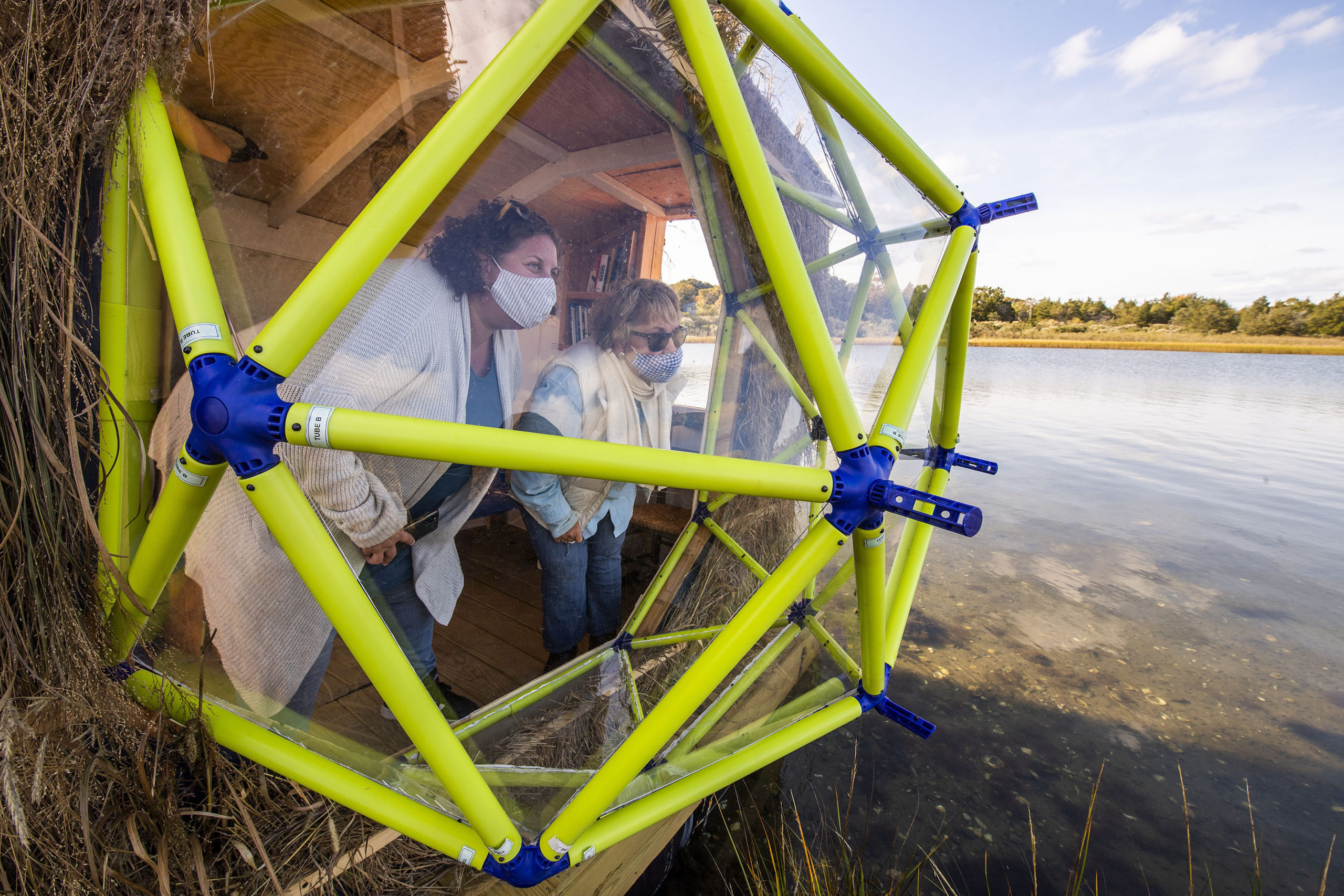 Amy Kirwin and Irene Tully peer out of Scott Bluedorn's "Bonac Blind" art construction its installation at the end of Landing Lane in Springs as part of the Parrish Art Museum's Road Show - Meet the Artist series on Sunday afternoon. MICHAEL HELLER 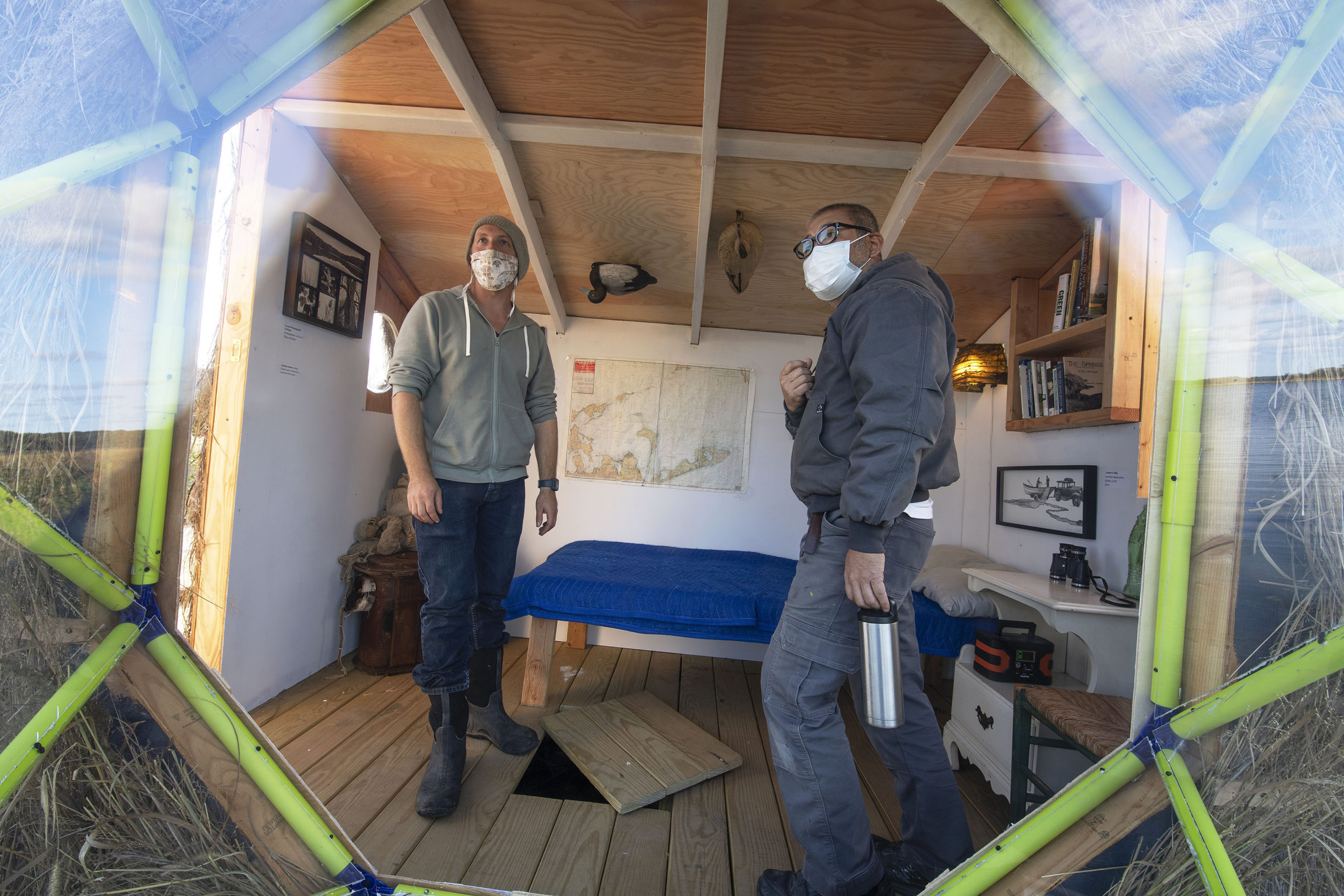 Artist Scott Bluedorn points out different features of his "Bonac Blind" art construction to a visitor at its installation at the end of Landing Lane in Springs as part of the Parrish Art Museum's Road Show - Meet the Artist series on Sunday afternoon. MICHAEL HELLER 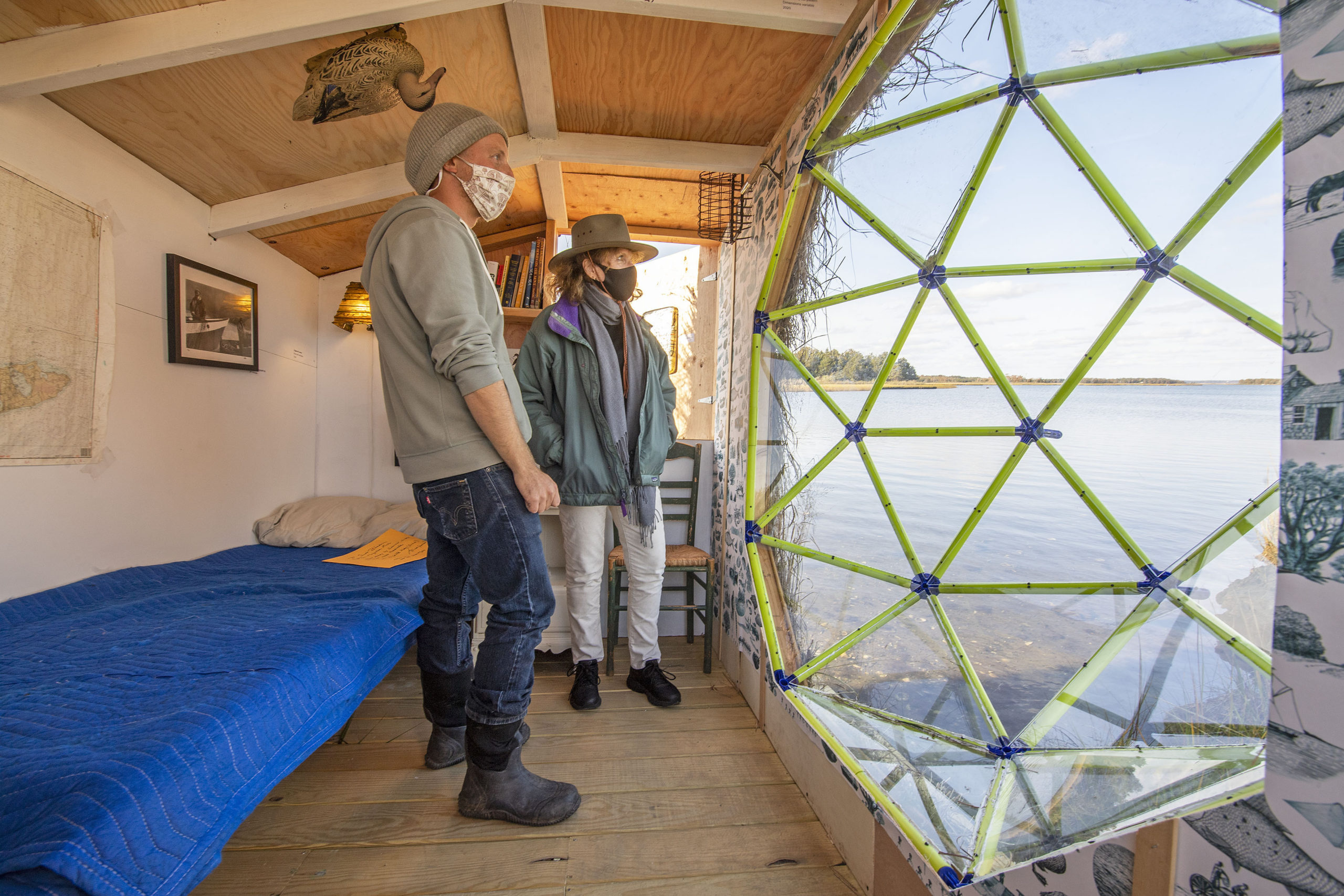 Artist Scott Bluedorn and visitor Jacqueline Marks check out the view from inside his "Bonac Blind" art construction at its installation at the end of Landing Lane in Springs as part of the Parrish Art Museum's Road Show - Meet the Artist series on Sunday afternoon. MICHAEL HELLER 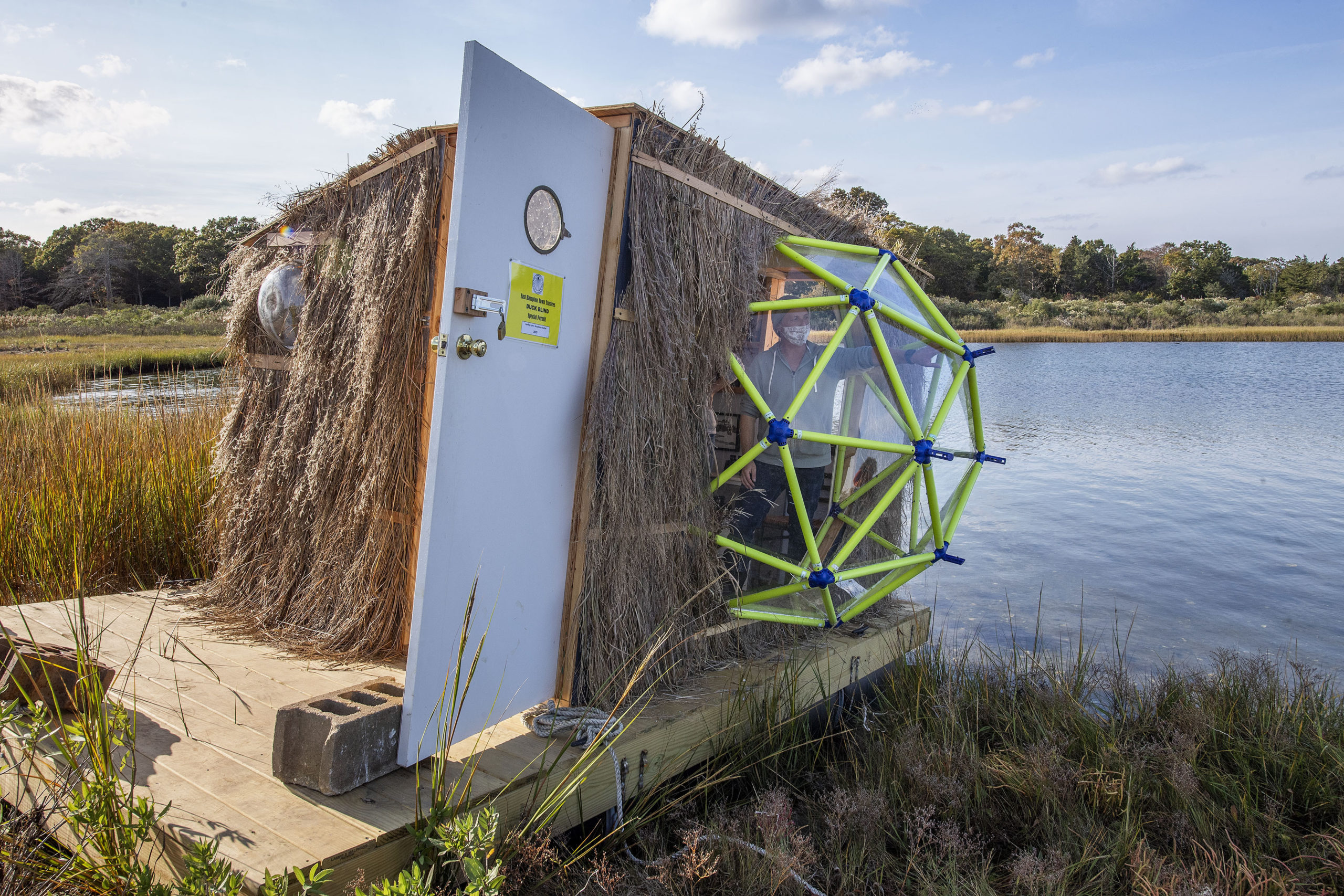 Artist Scott Bluedorn points out different features of his "Bonac Blind" art construction to a visitor at its installation at the end of Landing Lane in Springs as part of the Parrish Art Museum's Road Show - Meet the Artist series on Sunday afternoon. MICHAEL HELLER

East Hampton-based artist Scott Bluedorn's installation “Bonac Blind,” a floating dwelling created with handmade or found materials, was moored off Landing Lane, Springs, East Hampton, from October 17 to 23. The structure, an interpretation of duck blinds used for camouflage by local hunters, addresses the affordable housing crisis and the gradual disappearance of Bonac culture on the East End. The “Bonac Blind” was presented as part of the 2020 Parrish Road Show, the museum’s creative off-site exhibition series that connects art to life in the region by featuring temporary projects by East End artists.

“The ‘Bonac Blind’ is a sign of hope, a creative response by an artist to a very specific local problem: affordable housing which affects so many communities here, including artists,” said Corinne Erni, project organizer and senior curator of ArtsReach and special projects at the Parrish. “I am particularly thrilled to showcase the project during these enormously challenging times when many art projects and exhibitions are canceled.”

According to Bluedorn, who participated in the museum’s 2019 Artists Choose Artists exhibition, “The ‘Bonac Blind’ is a multi-faceted art intervention: A floating, off-grid microhome that references traditional Bonac culture of fishing, farming and hunting while also serving as a comment on the erosion of this culture due to the compound problems of housing crisis, climate change and modernity.”

Constructed from a repurposed, plywood duck blind and covered in native reed, the structure features industrial barrels, resin windows, and a geodesic dome. According to the artist, the name is a double entendre, obviously referring to duck blind used during waterfowl season. But the title also points to the area’s current population, largely blind to Bonac culture and the many problems it faces. Bluedorn’s intention is to raise awareness of the drastic shortage of affordable housing on the East End that has effected a mass exodus of working-class people, particularly in the generations of East Hampton families known as Bonackers or Bubs, who farmed, fished, and hunted for their livelihood or as tradition. This population is increasingly leaving the area for more affordable regions, taking with them character, history, culture, and tradition.

An intentionally ironic solution to housing, the “Bonac Blind” proposes that a camouflage shed can be remade into a tiny and affordable floating house, complete with off-grid amenities such as solar panels, solar batteries, a simple bed, plumbing, and a hot plate. While alluding to traditional Bonac culture of hunting and austere living in the natural environment, the “Bonac Blind” was fully functional and decorated with original artwork. The project also references the current trend of tiny homes that are sustainable, resilient, and adaptive — as well as the desire to separate oneself (physically and hermetically) from the “wealthy elite” culture of the Hamptons.

Artist, illustrator, and designer Scott Bluedorn works in various media, including painting, drawing, print process, collage and found object assemblage. Drawing inspiration from cultural anthropology, primitivism, and nautical tradition, Bluedorn distills imagery that speaks to the collective unconscious, especially through myth and visual story-telling — a world he conjures as “maritime cosmology.” Bluedorn received his BFA from the School of Visual Arts, New York. His work is on view at The Edward Albee Foundation in New York City, and is included in numerous private collections in the U.S., Canada, Ireland, France, and Portugal.

‘A Christmas Carol’ Dinner Theater On The North Fork

Vanessa Leuck, Ethan Popp and Broadway on the North Fork will produce a one-man adaptation of Charles Dickens’s “A Christmas Carol” to play an immersive, socially distant run at Greenport’s First and South Restaurant & Bar this holiday season. In a three-hour experience, an audience of 20 patrons will enjoy an elegant feast while witnessing this epic tale in an all-new telling. The production runs December 9 through 20 with dinner performances on Wednesdays, Thursdays, Fridays and Sundays at 5:30 p.m. Brunch performances are offered on Fridays and Sundays at 11:30 a.m. Starring as the show’s storyteller is New England ... by Staff Writer

Bay Street Theater will present the 2018 Geffen Playhouse production of “A Christmas Carol” on ... by Staff Writer

On Saturday, December 5, at 4 p.m., St. Luke’s Episcopal Church in East Hampton will ... by Staff Writer

On Friday, November 27, at 5 p.m., artist and activist Jackie Black will discuss “Last ... by Staff Writer

Visionaries 2020 is a series of intimate gatherings hosted by East Hampton’s Guild Hall that ... by Staff Writer

The photography of Hampton Bays resident Matthew Raynor will be on view in an exhibition ... by Staff Writer

A Talk About ‘Montauk Time’ With Novelist Peter Bove December 1

Winter is creeping up on us, and though concert venues are still closed to in-person programming, that doesn’t mean the Bridgehampton Chamber Music Festival is throwing in the towel and going into hibernation. Instead, BCMF created “Autumn Series at Home,” a three-concert season. The last of the three online programs, “Fall Winds,” is coming up on Saturday, December 5, at 5 p.m., and offers a blustery program of music featuring Mozart’s sparkling “Oboe Quartet, K. 370,” Elizabeth Brown’s beguiling “Liguria for Flute, Clarinet, Violin, Cello and Piano,” and Louise Farrenc’s sumptuously romantic “Sextet for Winds and Piano.” Artists for the ... by Staff Writer