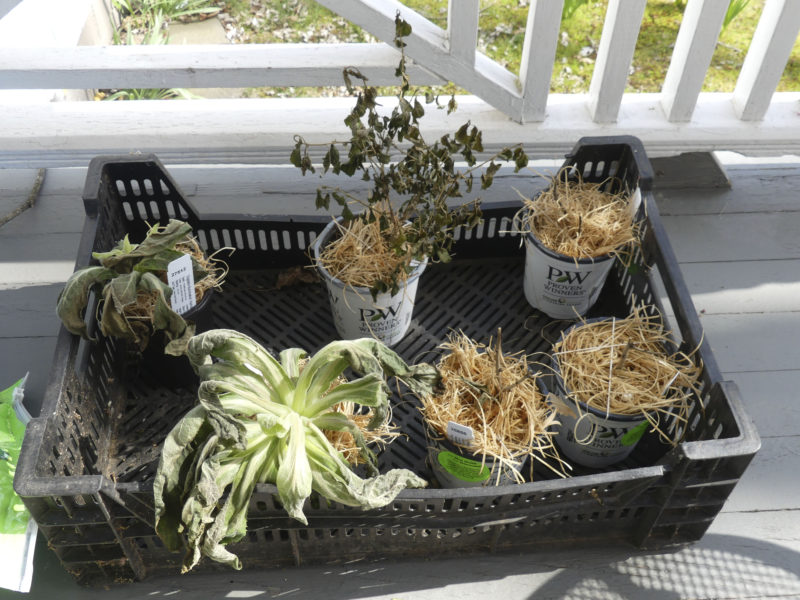 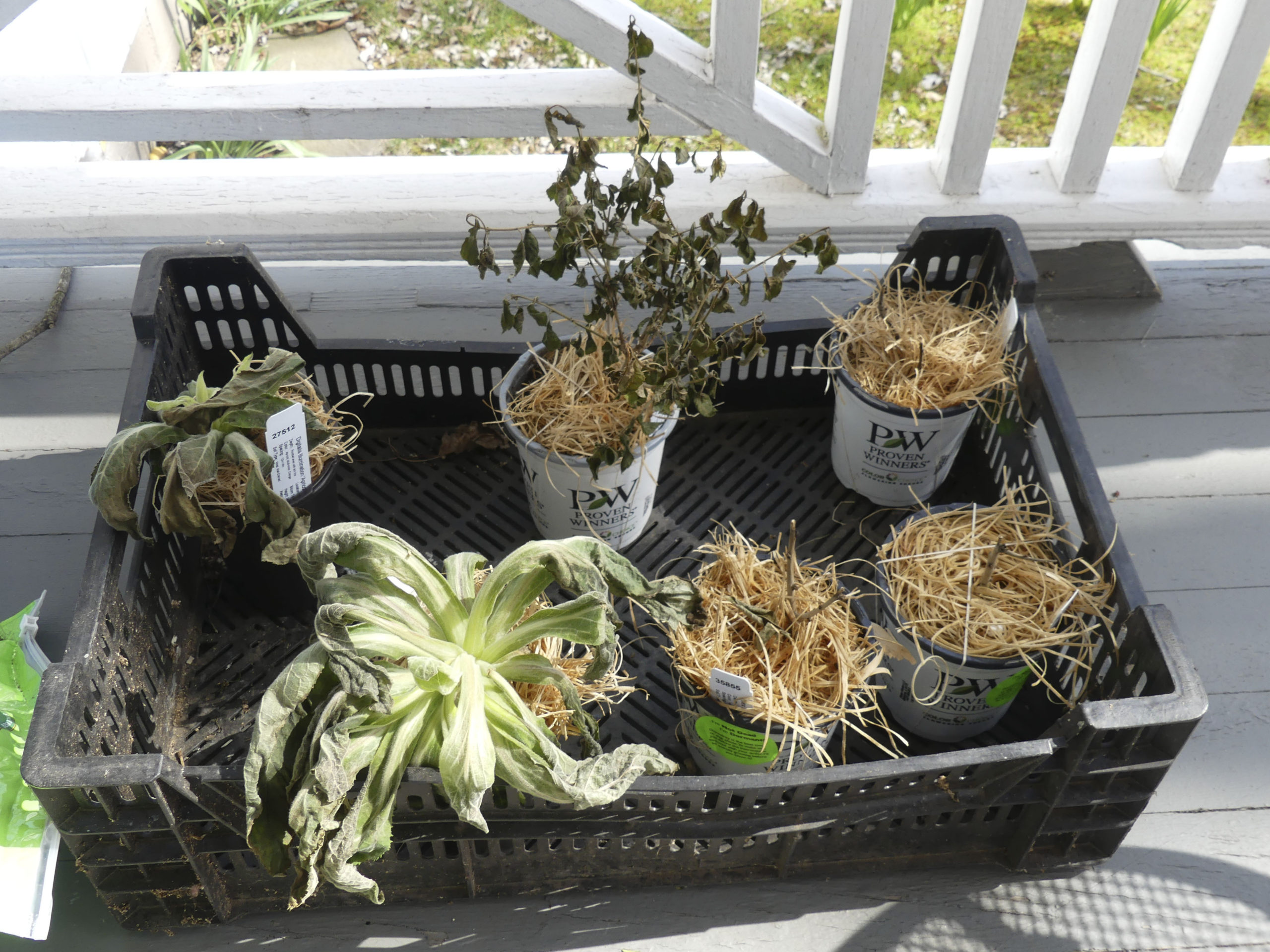 Wayside Garden plants one day after arrival. Two on left are digitalis, rear center is the male Ilex with crispy brown foliage and the 3 others are the ‘sticks’ of Ilex verticillate. ANDREW MESSINGER 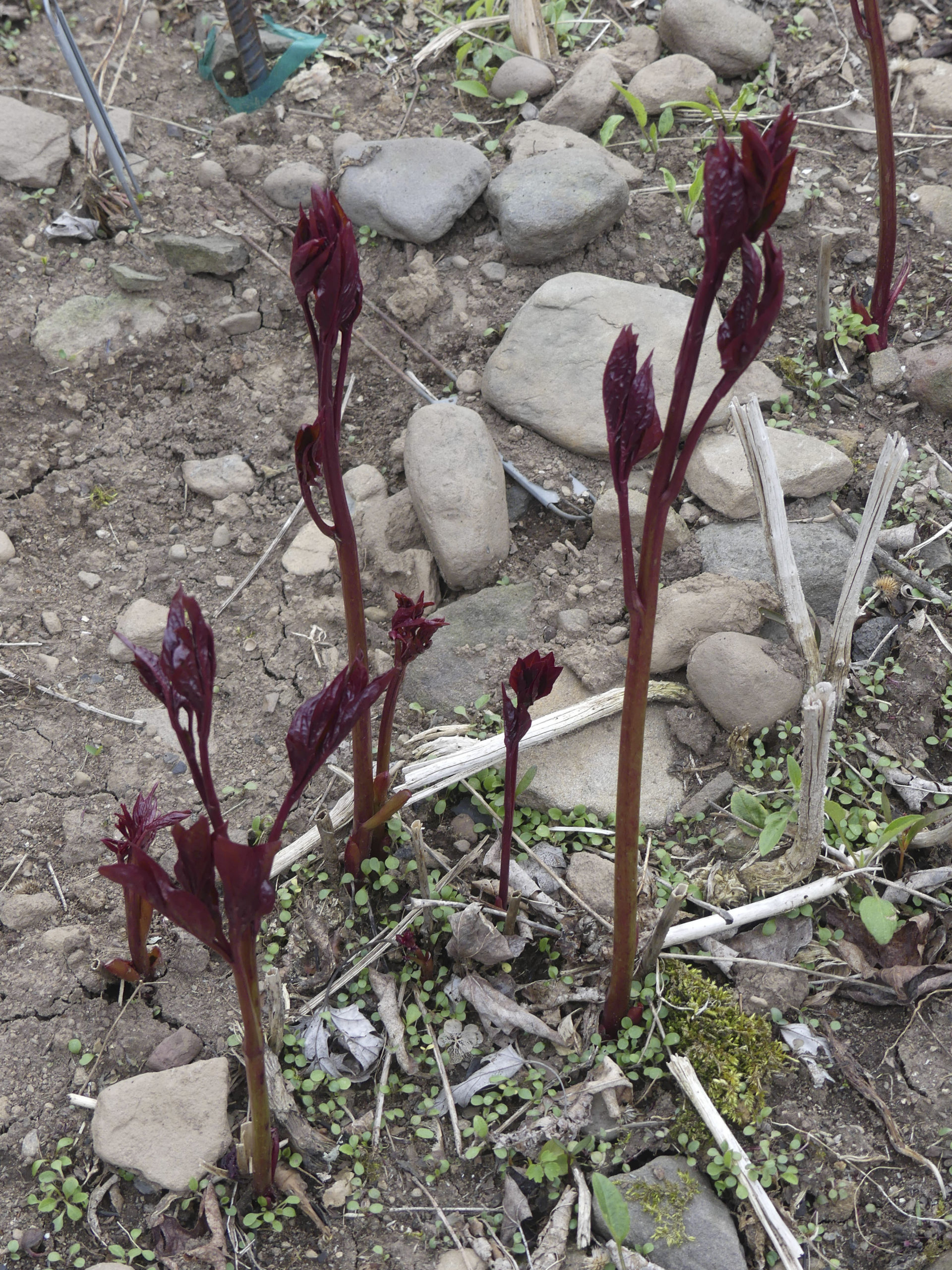 In the same spot for 15 years, this peony has pencil thin stems, will have only one or two flowers and is showing that it needs replanting and division later this year. ANDREW MESSIGER 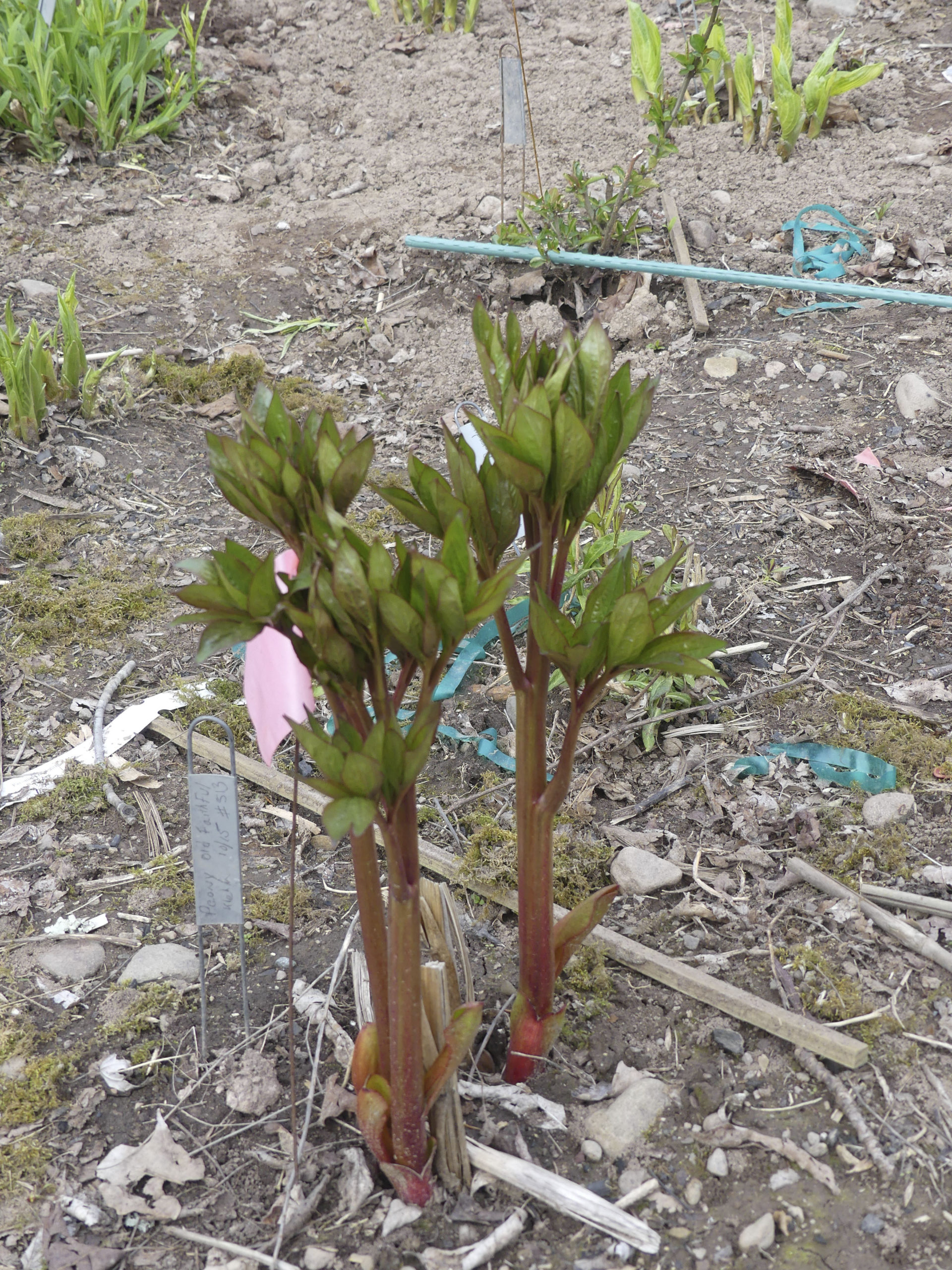 This peony plant is only five years old and its stems are three-quarters of an inch in diameter. ANDREW MESSIGER 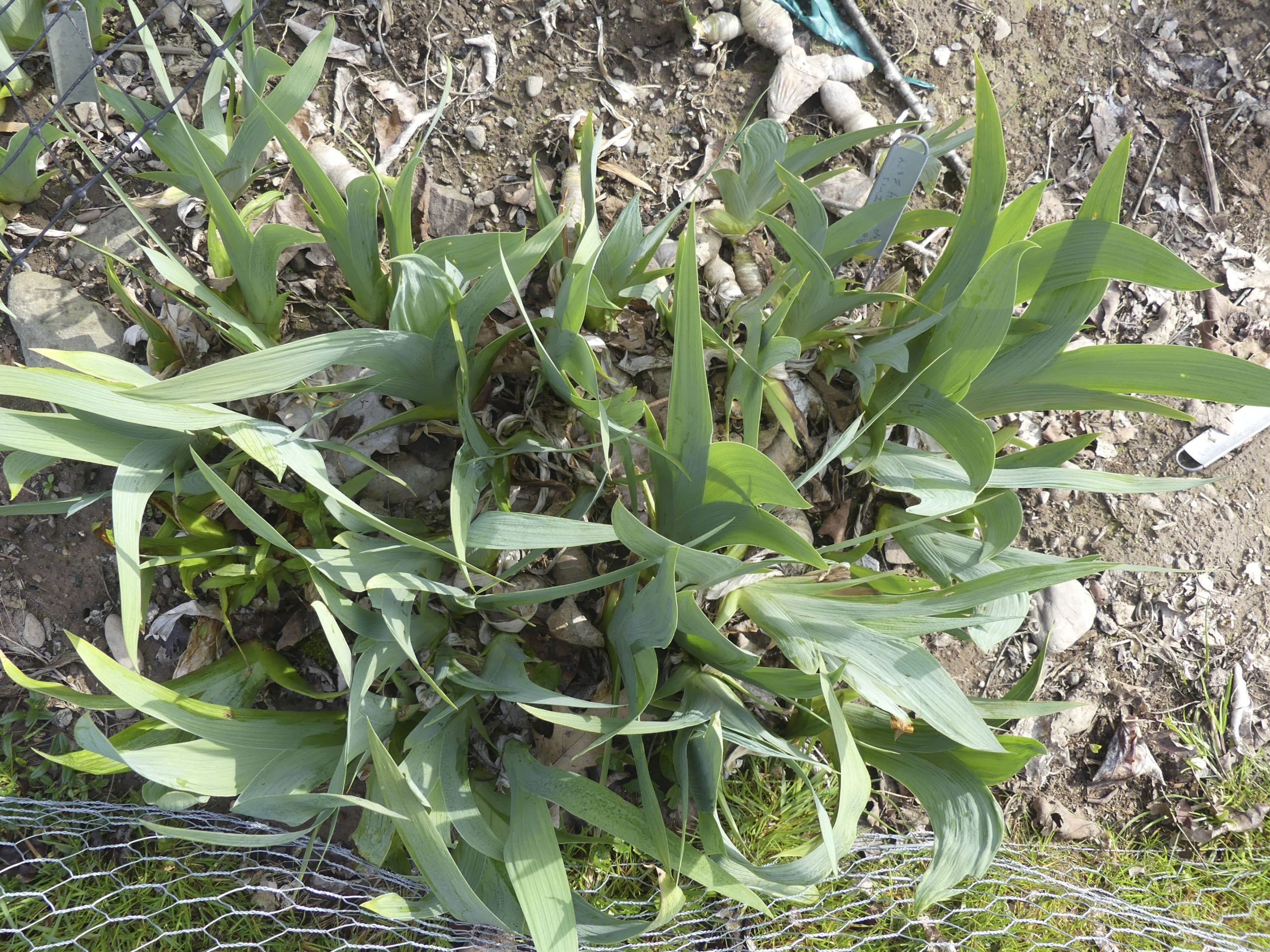 A 2-foot by 4-foot iris clump has become congested and tight resulting on only a few flowers on the periphery at bloom time. Dividing the clump in August will rejuvenate the clump and result in divisions that can be planted elsewhere or gifted. ANDREW MESSINGER

First, a short explanation about what’s going on with my column. Yes, I am still alive — and thank you to those who have written.

A number of weeks ago, the Express News Group suspended all the columns from paid columnists. This included the Hampton Gardener. This has not been unique to these papers, and I know there are efforts to resume some normalcy, but until advertising revenue picks up, it will be difficult.

In the meantime, I thought it very important to stay in touch with you, if only to share a few thoughts and help to keep your gardens and plants on track. These updates will be much shorter than my usual column, I will not be paid, and if you would like the full column to return then by all means let the editors know.

In my last column back in March, I suggested that you become acquainted with the Victory Garden concept, and I was so happy to see that within weeks it became a national trend.

The COVID-19 epidemic has thrown the gardening and horticultural world into confusion. Local garden centers are trying to innovate to get you the plants and supplies you need, and mail order nurseries and seed houses are suffering from a double whammy. They are all short on staff. Many of us are unable to visit our local garden centers, and we’ve turned to the mail order nurseries — and they simply have been swamped, as have the seed houses.

If you are in need of plants, please check the garden center web pages to see what they have set up to accommodate your needs. Many will take phone and email orders, which you can arrange to pick up, and many even have their current inventories online.

Seed houses like Johnny’s say they are running seven to 10 days in getting orders out. I just placed a small seed order with Burpee and had my seeds in four days.

Plants being shipped by the U.S. Postal Service seem to be delayed by several days, while orders being delivered by FedEx and UPS are pretty much on time.

The weather, on the other hand, is not being so helpful. As I write this on May 9, I’m upstate, where it was 25 degrees last night, there is 5 inches of new snow on the ground, and there are freeze warnings out for some of Long Island. Last night, it was 34 degrees in Westhampton.

Our frost-free date for most of the East End is April 24. And while we may not have a frost out here, the growing season, which was three weeks ahead in late March, is now a bit delayed, and we will probably see some ramifications in the weeks to come.

The rest of May looks to remain on the cool side, and it appears that the summer will be cooler than last summer and not as wet.

One important note on a mail order nursery: I have not been a fan of the reincarnated Wayside Gardens. Their catalog is tempting, and I hadn’t bought from them for several years since my last fiasco with them. I was a sucker, though, and ordered a half dozen plants, four Ilex verticillata and two new digitalis cultivars.

The plants arrived more than two weeks earlier than any of the other nurseries I ordered from. The plants were packed using Styrofoam beads — and there simply isn’t any reason why these difficult-to-recycle, chemically produced packing beads should be used.

Three of the Ilex were no more than rooted sticks, less in diameter than a pencil, in plastic pots. The third Ilex, the male of the group, was fully leafed out and looked fine. The digitalis were nice as well.

But within 24 hours of being unpacked and left on a covered porch, the male Ilex foliage was totally shriveled and brown. About 80 percent of the foliage on the digitalis went crisp and limp, and the Ilex “sticks” never came to life. As the plants came from South Carolina, I suspect they were never hardened off, and as soon as they got up here they began to suffer, greatly.

I sent an email to Wayside describing the plants and offering to supply pictures. I received an automated response that they were very busy and would get back to me shortly. Five days later, after no response, I emailed again. Again, another automated response but no explanation, offer of a refund or replacement.

The moral of the story is simple: Don’t buy from a mail order nursery based on their catalog. Buy based on their reputation. In my book, Wayside (and Parks and Jackson & Perkins) do not deserve your business.

If you fertilize your lawn twice a year, this is just about the perfect time for your first application, with the second coming in September. If you do three applications, the first should be now, the second in August, and the third in mid-October.

Keep in mind that you cannot apply a pre-emergent weed herbicide to your lawn and seed it at the same time. Control the crabgrass now, sow the grass seed in late summer and early fall.

Home vegetable gardening is going to be the next big thing, if it isn’t already. Homegrown tastes better, you can grow what you want instead of what the store carries, and you don’t have to risk your life by going to the market for veggies.

Remember that there is a second season for the vegetable garden that runs from August through early November. Keep in mind, though, that this means sowing and planting in August for the fall harvest. These seeds need to be ordered now, or you may not be able to get the seeds you want. Store the seeds in a safe spot that’s not hot and not humid. Don’t refrigerate them.

We had a near disaster in the horticulture/agriculture industry when a disease known as Ralstonia showed up in a Michigan greenhouse. This disease can be devastating to potatoes, geraniums and a number of other crops.

At this point, it looks like it came into the United States on geranium cuttings from Guatemala for a new geranium planned for marketing for Mother’s Day in 2021. Those cuttings were contaminated and may have come to Long Island, propagated again, then were sent on to Michigan. We’re hoping that all the infected plants have been found and destroyed. Stay tuned.

Take a look at your irises and peonies. Are the irises flowering, or are just a few stems flowering on the outside edges of the clumps? Are the peony stems thin and wiry and smaller in diameter than a pencil? Had flowering become thinner and thinner over the past few years?

Both may need to be divided and replanted to rejuvenate them. The irises are done in August and the peonies in late August or September. Take a look now and make a note to remember to do this later in the season.

Be safe, stay at home as much as you possibly can, and, by all means, keep growing!