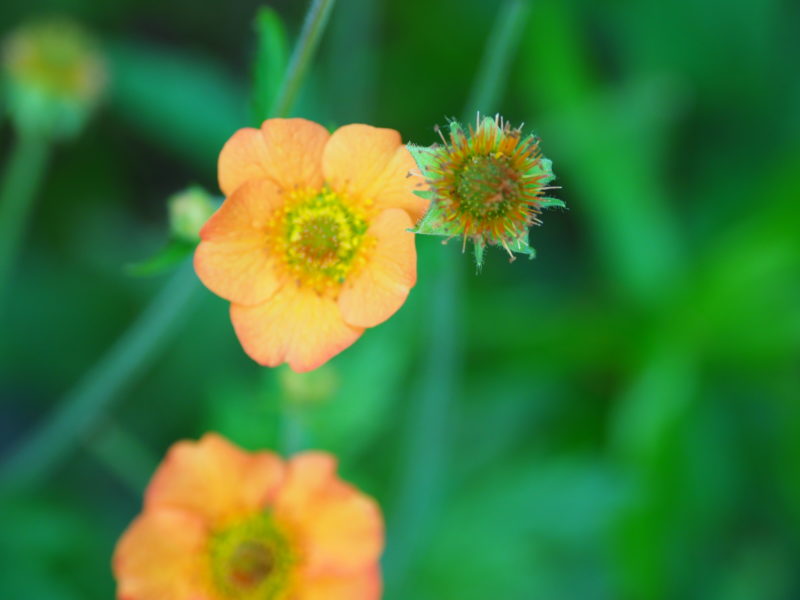 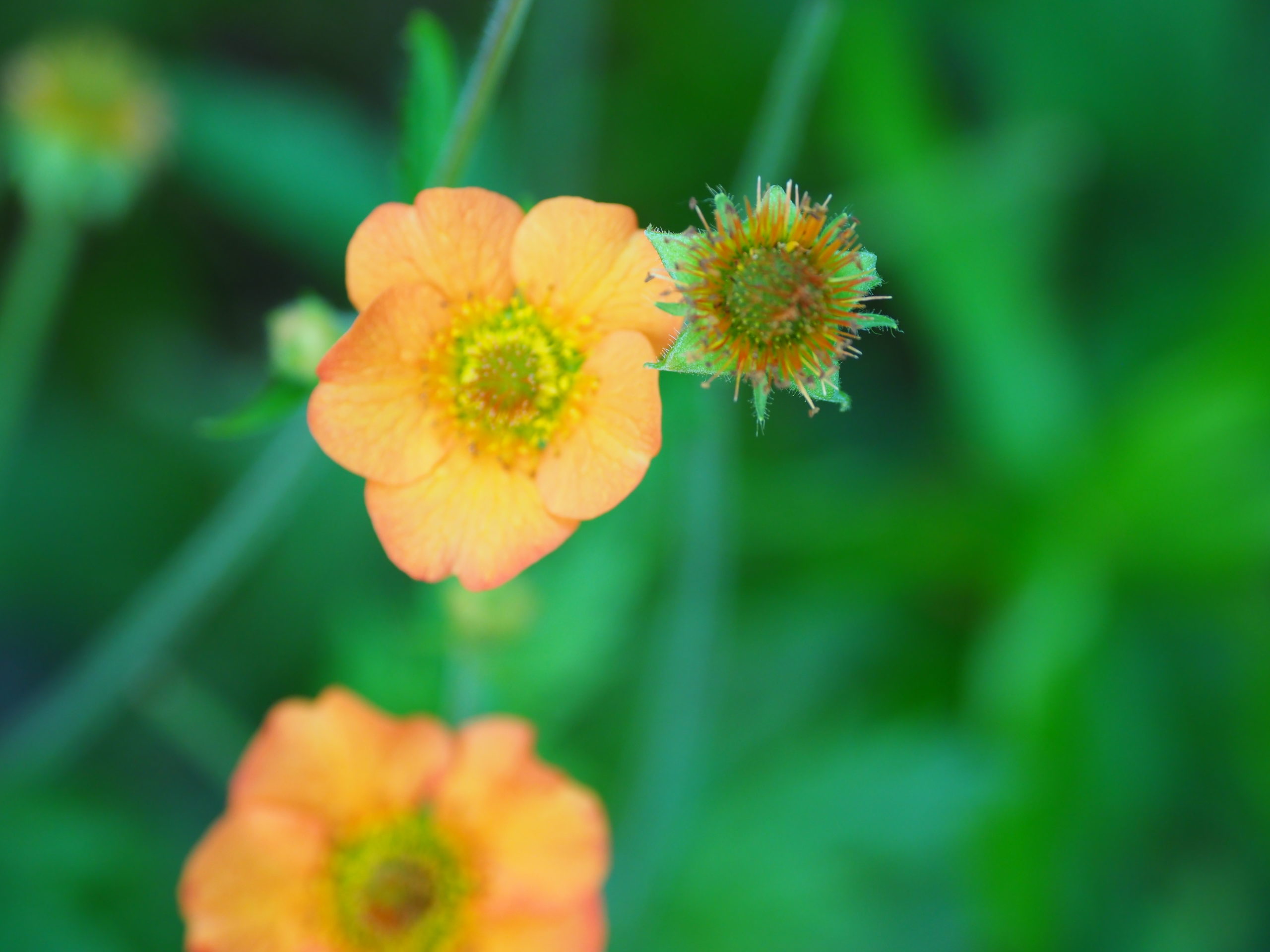 The flower of Geum "Totally Tangerine" on the left will last for a few days. It will then try to set seed and look like the "spent" flower on the right. When spent flowers are picked or deadheaded quickly, most plants will continue to flower for several more weeks. 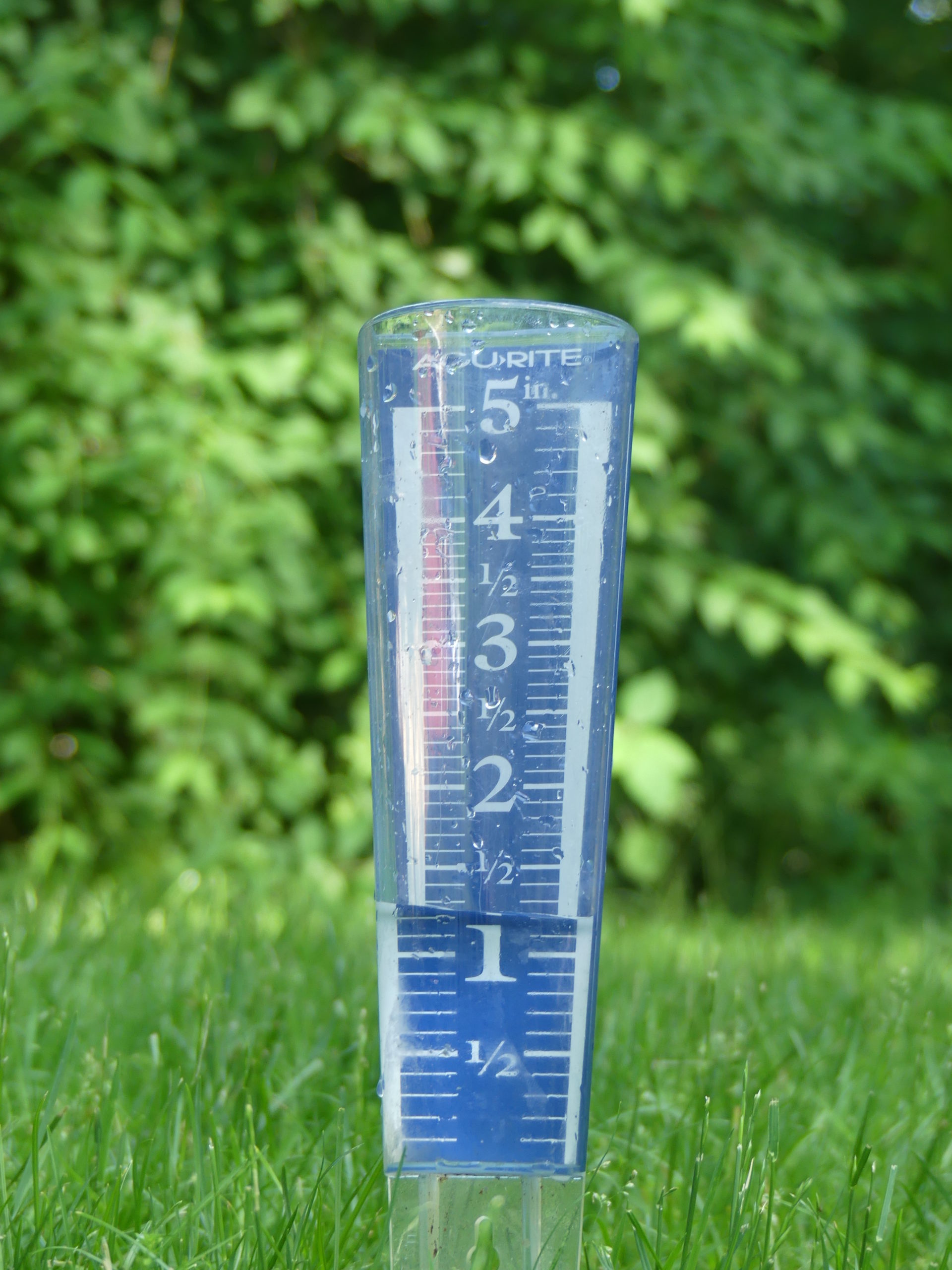 An inexpensive rain gauge (when emptied regularly and installed level) helps you know how much water your sprinkler(s) are putting out and how much water that thunderstorm dropped. They are available at most garden centers and hardware stores or online. Keep in mind the mantra: 2 inches a week. ANDREW MESSINGER 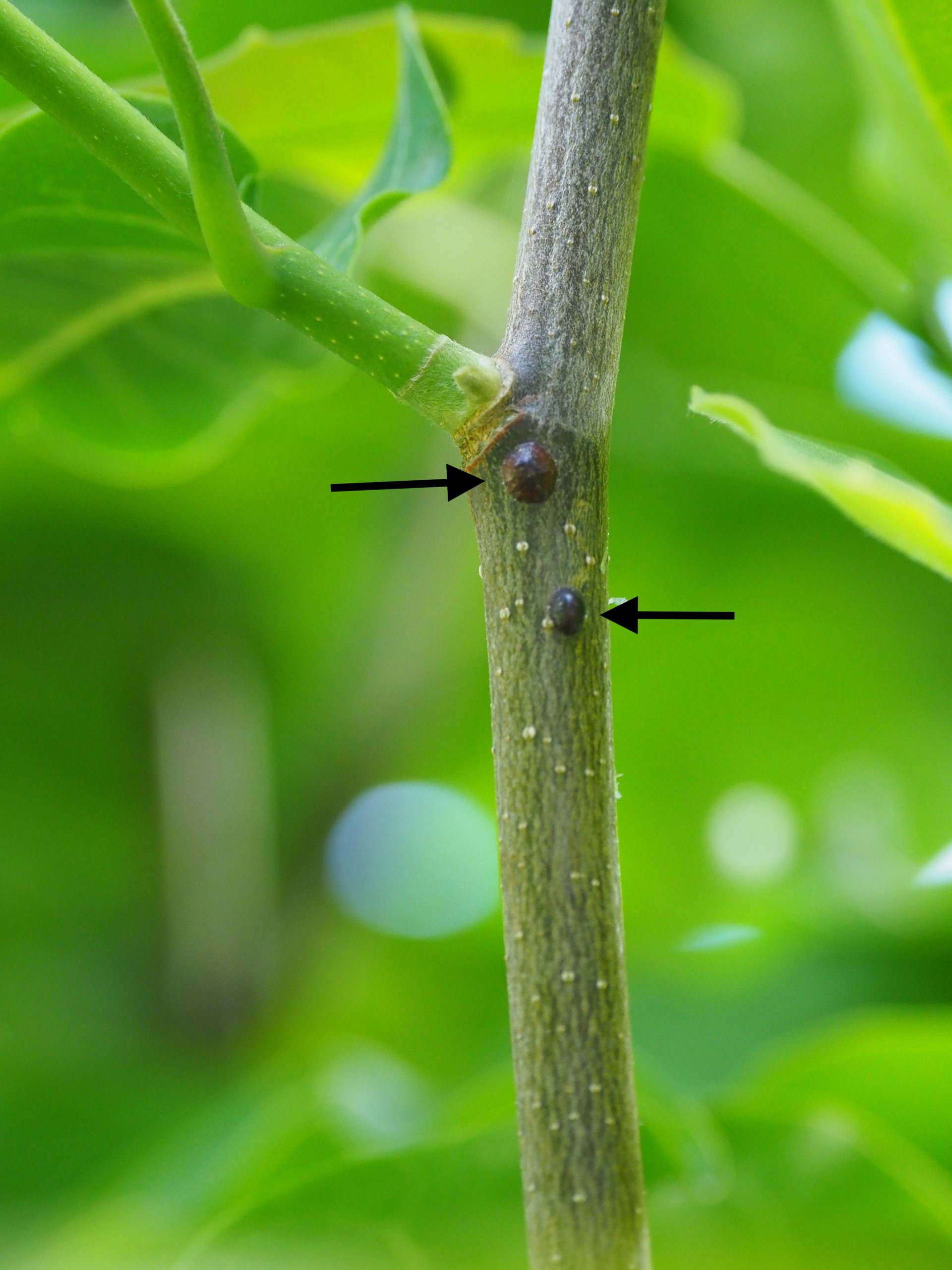 Note the two brown scales on this magnolia twig just a bit above center. The outer shell of the parent protects the larvae that are underneath. When these larvae become crawlers and begin to move onto the twigs and branches, horticultural oil can be sprayed to kill them. ANDREW MESSINGER

I had an email from a reader last week asking me to explain why he had brown footprints on his lawn that looked like they had been “burned in.”

I knew the answer even before I asked the question, but I posed it anyway: “Has anyone done any herbicide spot spraying in lawn or garden?” No, he responded, not him — but his gardener occasionally used a chemical weeder to spot-weed.

I’ve seen this happen in two ways. The footprints are one, and tire tracks are the other. Invariably, these are caused when someone inadvertently does some spot-spraying of something like Roundup, forgets where the spraying was done, and walks right over or through the sprayed area, or pushes a garden cart or wheelbarrow through the area. Days later, the footprints or tire tracks from the herbicide residue on boots, shoes or tires leave their dead “memory” tracks behind.

When you do spot-spraying for weeds with a non-selective herbicide (one that kills everything), remember where you’ve sprayed and stay off those areas for several hours while the spray dries.

Sitting on the porch, I noticed numbers of small insects landing on the leaves of a nearby magnolia and went to photograph them. I didn’t know what they were, and they didn’t seem to be damaging the tree. They’re small, bee-like in appearance and very frenetic.

They were later ID’d as a small “mining bee” in a mating ritual, and while looking at the stems and branches of the magnolia I noted raised bumps that looked like scabs. I peeled one off and, sure enough, it was the remnants of a scale insect. Under the hard shell of the scale were dozens of tiny scale babies.

These baby scales are immobile and unable to move, but as the summer progresses they will enter into a crawling stage — and that’s when they are vulnerable to control.

Looking at my other two magnolias, I discovered a second type of scale. This one is not a hard-shelled type but a scale that hides in a cottony mass, like tiny cotton swabs. Inside this mass are the immatures that will also emerge later as crawlers.

Both these pests excrete a very sweet material called honeydew, and in turn the honeydew can attracts ants and other insects that feed on it. The honeydew also causes the formation of a mold called sooty black mold.

It’s watering time. If you don’t have your hoses and sprinklers on hand, get them now. We’ve experienced shortages of both for several summers, when everyone realizes things are too dry at the same time.

Another watering tool you should have is a rain gauge. Watering does not mean attaching a spray nozzle to your hose and getting everything wet. That’s just a good way to spread waterborne diseases.

Ideally, we need 2 inches of rain a week to keep everything well watered. You need to make up the deficit if Mother Nature doesn’t provide. Water deeply as opposed to frequently. Be aware of the humidity, because on dry and windy days planters and garden beds that aren’t mulched (lightly) will dry much more quickly than on humid and cloudy days.

Most pots should be watered until the water runs out the bottom, or sit the pots in a container of water for about 15 minutes, then remove the water that remains.

Newly planted trees and shrubs survive much better when watered adequately for their first two years. This watering should start at planting and continue weekly until leaf drop or late fall.

Vegetables like tomatoes need a consistent supply of water to the root zone. Infrequent or erratic watering results in the fruit swelling when watered after a dry period, and then the skins crack as the water is taken up.

Never water at night, and avoid watering in the evening if it will result in foliage staying wet through the night. Wet foliage that stays wet is simply a breeding ground and invitation for diseases that need leaf wetness, then dry periods for disease establishment.

Here again, humidity is important. If you water late in the day, say, 7 in the evening, and it remains humid into the night, water will remain on the foliage. This is bad for many ornamentals (as in roses) and vegetables (as in tomatoes).

It’s also time to do deadheading. Not every flower needs deadheading, but it’s particularly important to get many of the roses to re-bloom, as well as non-hybrid flowers. For some of us, it’s just a habit; for others, a horticultural practice.

I have a geum (Totally Tangerine) that I really like. It flowers reliably and prolifically from May through late July. When the flowers are spent, a half-inch seed head is left behind. Every evening, as I walk around the garden, I spend a few minutes snipping off the seed heads.

My assumption is that this encourages new buds and also pushes the existing buds to continue to open and flower. I could be totally wrong, though, if indeed these plants are “mules” and unable to reproduce from seed. Wasted effort? Maybe — but the plants look much nicer when deadheaded. Next year, I want to experiment and deadhead some of these geum and not others to see if there’s any difference in flower production and the flowering period.

Deadheading doesn’t work on all plants, though. It won’t result in more lily (as in Asiatic or Oriental) flowers, but it does encourage new salvia spikes when done soon enough, as the old spikes begin to fade. We thin flowers on fruit trees, as this results in fewer but larger fruits. Also works on some veggies.

Experiment. Record and write down your experimental progress, and don’t rely on your memory for year-to-year results.

And, of course, keep growing!