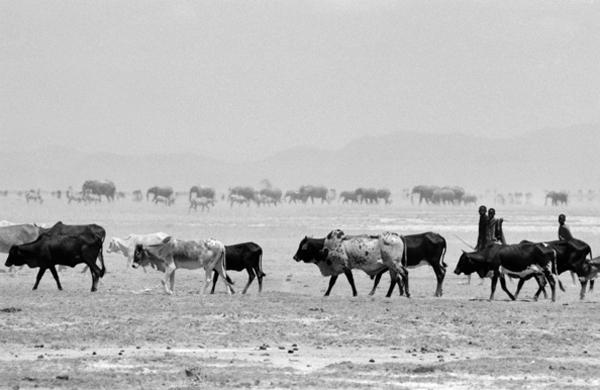 “Convergence of the Tribes,” one of the extraordinary images of Africa on exhibit at Stony Brook’s Avram Gallery, is imbued with all the poetic beauty that identifies the work of photographers Cyril Christo and Marie Wilkinson. It also happens to be the image the photographers singled out in a recent telephone interview as among the most important in delivering their message.

As those already familiar with their work will know, that message is an urgent call for a renewed balance between humans and animals. It is a plea for repudiation of the plunder and commodification that characterize our modern-day relationship with wildlife, and with elephants in particular, and a return to the awe and empathy that animals in the wild inspired in our early ancestors and continue to inspire in cultures untouched by modernization.

Each of the two dozen black-and-white photographs in the show, titled “In the Footsteps of Giants: Origin and the African Elephant,” puts visual poetry at the service of that mission, but, as both photographers stressed, “Convergence of the Tribes” does so with particular clarity. What the camera captured in this image, said Ms. Wilkinson, was “the co-existence of

the wild animals and humans with their domestic animals converging on the same water hole.”

“It’s a very humble photograph,” added Mr. Christo of the scene captured in Amboseli, Kenya, “but it is a picture full of equipoise”—man and animals in balance in the natural world, sharing an essential resource.

Summer residents of Amagansett, Ms. Wilkinson and Mr. Christo, who is the son of conceptual artists Christo and the late Jeanne Claude, are partners in marriage as well as professionally. Together they have pursued their shared passion for the wonders of the natural world, traveling to untraveled places, concentrating in their photography on the endangered African elephant but also bringing back images of other wildlife and the indigenous peoples whose traditional understanding and respect for animals and the elemental powers are also at risk as modernization encroaches.

Back at home, the two have combined their photographs with powerful essays in two large-format documentary books—“Walking Thunder: In the Footsteps of the African Elephant” and “Lost Africa: The Eyes of Origin”—that make the case for what Mr. Christo calls an “empathetic revolution.” The Avram Gallery exhibition includes photographs from the books, along with quotations from explorers, thinkers and tribal spokesmen, all intended to raise awareness of the huge place that the African landscape and the elephants occupy in human consciousness and of the tragic consequences that their loss would precipitate.

Questions surrounding the fate of the African continent will be further explored on Saturday, April 24, at 7 p.m. when Lawrence Martin, professor of anthropology and anatomical sciences at Stony Brook and director of the Turkana Basin Institute, will lead a discussion, “Looking at Africa,” in the Avram Theater. The event will be followed by a gallery reception.

Though Mr. Christo seems to have an intensity of awareness that rises to a level well above the ordinary, he is well grounded when it comes to citing science and delivering facts.

“Ninety percent of the Central African elephants have been destroyed,” he asserted, noting that where once there were several hundred thousand, their numbers are now “down to 50,000 or less.” Citing “major biologists,” he noted that the diminution of the elephant herds is believed to have affected the African rain forest, which  in turn has had an effect on climate.

According to Ms. Wilkinson, pressures from human encroachments, climate change and the ivory trade are the main factors behind the decimation of the elephant population, with the ivory trade presenting “one of the biggest hurdles for their future.”

She noted that when the Convention on International Trade of Endangered Species met recently and refused to grant a request from Tanzania and Zambia for permission to sell their stockpiles of confiscated ivory, the decision was a welcome victory.

“It prevents a new flood of ivory coming into the market,” she said. “It challenges the market.”

There are other signs of cracks in the mindset that looks upon wildlife as expendable. Ms. Wilkinson offered the example of a program designed to help the Masai become stewards of the wildlife in their midst—“to value the wildlife, handle them and earn a living with their skills.”

But despite these efforts, even optimists are bound to conclude that the problem is huge and that reversing the lust for ivory in cultures where ivory trinkets are highly prized symbols of status will be extremely difficult.

“It’s a syndicated trade on a scale with arms and drugs,” said Ms. Wilkinson of the market for ivory. In the rising middle classes of Asia, she added, ivory carvings, trinkets and statuettes are more and more in demand.

“We all need to shift what we value, all over the world” said Mr. Christo, whose hopes for real change clearly extend far beyond recent accomplishments.

“It is great that the market will not be flooded because we said no to Tanzania and Zambia,” he acknowledged, but he went on to assert that even more distressing than the “physical” aspects of the elephants’ trauma as seen in their victimization by poachers are the things we don’t see. By separating ourselves from the earth and its other inhabitants, we have lost touch with something essential within ourselves, he suggested, and that has had traumatic consequences on both sides of the relationship.

What happens when that connection is lost is a question addressed in “Lost Africa,” Ms. Wilkinson observed, adding that some photos on view from that book “show how humans have survived when they have maintained their traditional knowledge of place. They have multiple backup plans to deal with an off-year.”

According to Ms. Wilkinson, those backup plans no longer suffice when climate change disrupts weather patterns that were once fairly predictable and traditional knowledge, disrespected in the modern world, is renounced.

“These are people who rely on consistent patterns and when the rains don’t come, come late or come at just a fraction of what they normally are, it throws the system into havoc,” she said. Among  the consequences: cattle die, there is inter-clan fighting, inter-tribe fighting, cattle rustling and the insecurity makes poaching more attractive.

Mr. Christo proposed thinking of climate change from a different perspective, suggesting that it reflects something deeper, something to which we are not properly attuned.

“All of nature is so much more complex than what we know,” he said, adding that because we humans are “only looking at the ecological” we are ignoring the mysterious at our peril.

In conclusion, Mr. Christo quoted from another passionate advocate for the African elephant, Romain Gary, who wrote in his 1956 book, “The Roots of Heaven”: “Whoever has seen these giants on the march across the last great free space of the world knows that this is something that must not be lost.”

Mr. Christo and Ms. Wilkinson will be on hand following Saturday’s reception to sign copies of their own passionate plea for the preservation of the African elephant, “Walking Thunder.” (A percentage of the income from book sales will go to The David Sheldrick WildlifeTrust, The Tusk Trust International and the Kerulos Foundation.)