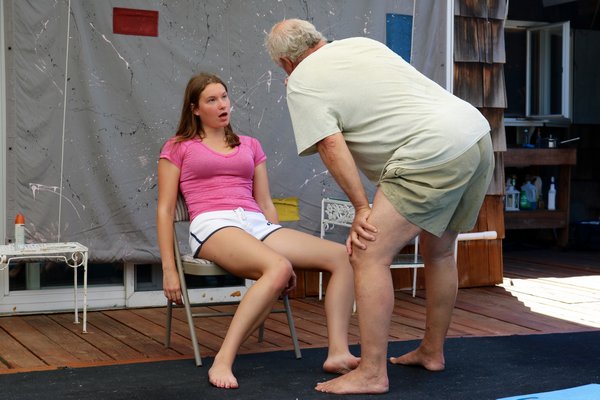 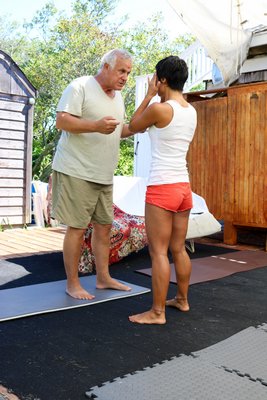 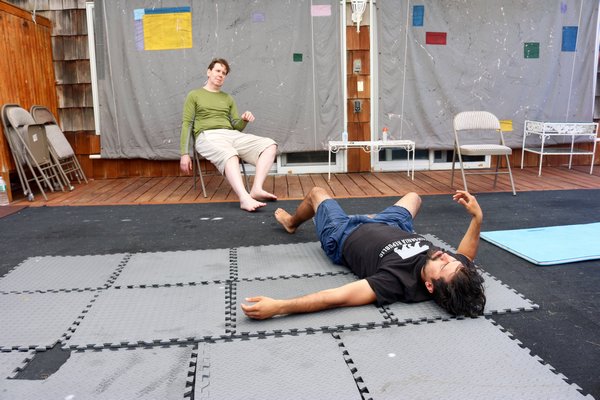 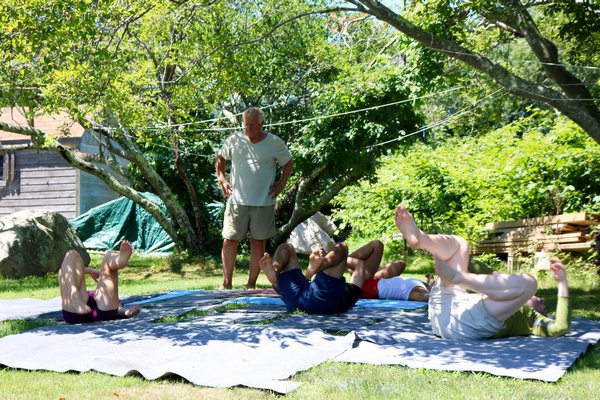 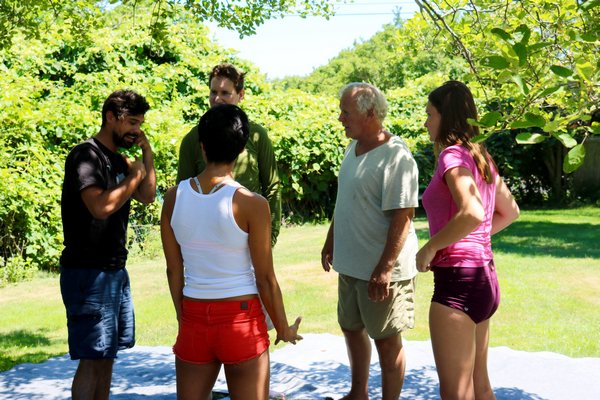 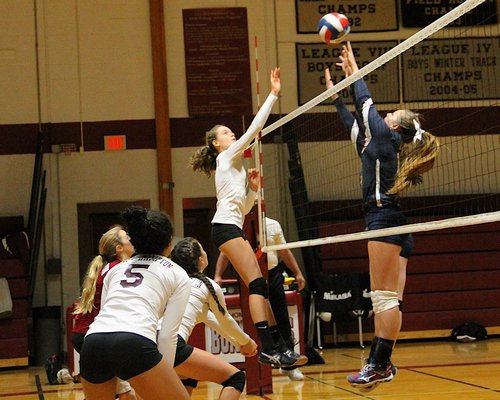 Prudence Carabine in front of the East Hampton Historical Farm Museum and site of the dig, during a recent fundraising brunch. ALEXANDRA TALTY 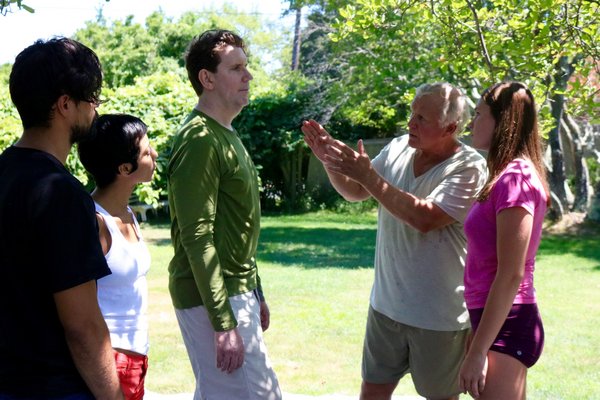 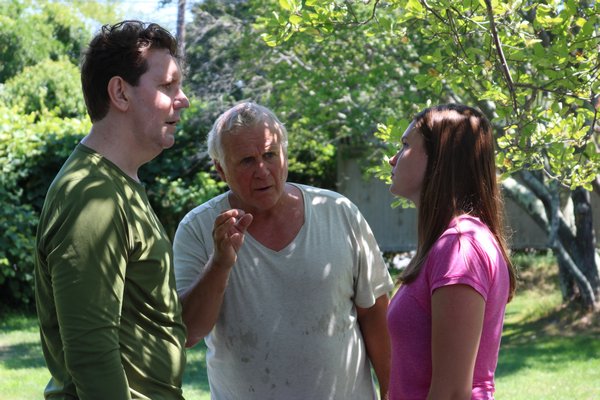 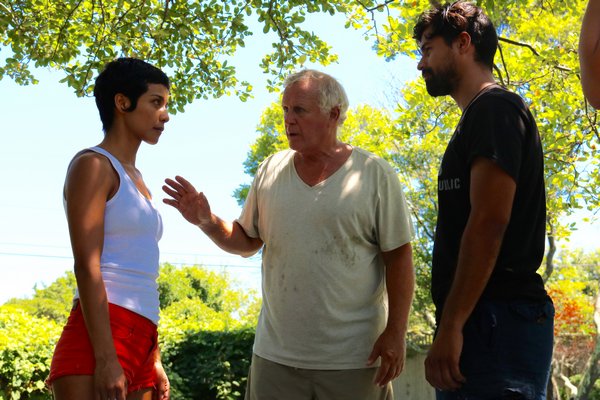 Screams echoed from the backyard of a Montauk beach house on Friday morning. Moans and gibberish ricocheted over the roof and around the side of the cottage. And when a bicyclist pedaled past the driveway, he didn’t even flinch.

The scene he was not privy to involved three adults squirming around on the back deck, cushioned with foam mats. An old sail served as a makeshift awning, protecting those underneath from the harsh sun. Every few seconds, a guttural noise filled the air. No one acknowledged each other, lost in their own imaginations.

While the scene could have passed for a circa-1970s hallucinogenic get-together, none of the parties was under the influence, Gary Swanson assured. The human beings flailing their limbs were Method Acting, according to their instructor, who explained that their behavior was completely under their control.

“They’re trained to keep going under any circumstances,” Mr. Swanson said of his student actors, speaking loudly to drown out the incessant noise. “You may see crying, laughing—but they know exactly where they are. It’s going to look crazy.

“My neighbors have adapted quite nicely,” he added. “I could be murdered and tortured for three hours, and nobody would call for help!”

For the last nine summers, Mr. Swanson could be found at his Montauk beach house, where he teaches “The Method” to 10 students of his choosing. They can enroll in either a one- or two-month program at his home, where, despite the proximity to the beach, his students experience a grueling summer, engaging in an unorthodox technique usually foreign to them.

“I come from an analytical background,” said Gregory O’Connor, a 12-year student of Mr. Swanson. “And I took classes in Boston, where they were applying analytical and rational process to an art form, and I thought, ‘That’s not it.’ So, I came to New York and looked around. I found this. And while it’s irrational, it’s working with your subconscious as an artistic tool, living in an imaginary world.”

Method Acting has been practiced for generations. It was most notably brought into the spotlight by powerhouse acting teacher Lee Strasberg, under whom Mr. Swanson studied for seven years while starring in the daytime drama “Somerset,” which aired on NBC from 1970 to 1976.

Mr. Swanson used what he learned from Mr. Strasberg to launch a teaching career, handing down the technique and lessons to younger generations of actors. Splitting his time between Montauk and Manhattan, Mr. Swanson teaches the majority of his classes on the Upper West Side, though he occasionally helps out with the Actor’s Studio MFA program, which he co-founded at the New School of Social Research, now at Pace University.

Student actors in his programs participate in improvisation, sensory work, cold readings and other exercises. The actors build a place, an object and/or sunshine in their minds, particularly through sensory work. “I’ve seen an actor who is doing an exercise with sunshine involved, and I’ve seen his skin, right in front of me, turn bright red,” Mr. Swanson said. “This is powerful stuff.”

Despite outward appearances and an indistinguishable language, the exercise has a point, he said. It allows actors to access places that they would not otherwise visit. “If an actor needs to play a lawyer, or a soldier, or someone who gets shot, they have previous emotions, feelings and places that they have already tapped into,” Mr. Swanson said. “And they can use that to reproduce on stage, or on screen.”

Mr. Swanson’s exercises are not easy, yet he doesn’t ask his students to do anything that he has not done himself, under Mr. Strasberg’s direction. He proved it on Friday, when one his students, Emanuel Sylvano, struggled with conveying raw emotion through song and, ultimately, decided to give up.

Suddenly, Mr. Swanson channeled his frustration and anger, and he expressed everything he was feeling by singing the lyrics of the Beatles’ hit “Yesterday.” In an instant, each student who had struggled with the exercise realized it was possible.

“I’m not going to ask them to do anything I’m not going to do,” Mr. Swanson said, after the startling performance. “I’m an actor who teaches, not a teacher who wants to act.”

Sofya Bubnova entered the program a few weeks later than the rest of the students, so she watched the unfamiliar technique from afar before another student, Liz Karmooch, asked her to speak gibberish.

“I did it, and I began to feel relaxed,” Ms. Bubnova said. “I said to Gary, ‘I feel like I’m about to pass out.’ He described exactly what I was feeling. And he said, ‘Good.’”

For more information about Gary Swanson and his Montauk acting group, visit garyswanson.org.

With February on the horizon and Black History Month soon to begin, exhibitions and cultural ... 25 Jan 2022 by Annette Hinkle

Screening With Jenn Freeman And Alexander Hammer At The Church

On Thursday, January 27, at 6:30 p.m. Choreographer Jenn Freeman, a current resident at The ... by Staff Writer

Winter Fun In The Green Room

The Green Room Bar on the third floor of the Sag Harbor Cinema is now ... by Staff Writer

Over the weekend of January 21 and 22, the Westhampton Beach Performing Arts Center (WHBPAC) ... by Staff Writer

New Board Leadership Announced For The Parrish Art Museum

The American Hotel, a fixture of Sag HarborŌĆÖs Main Street since the mid-1800s, has its ... by Sophie Griffin

In the months ahead, Hamptons Jazz Fest will heat up the East End with the ... by Staff Writer