A Snowglobe For Sag Harbor - 27 East

A Snowglobe For Sag Harbor 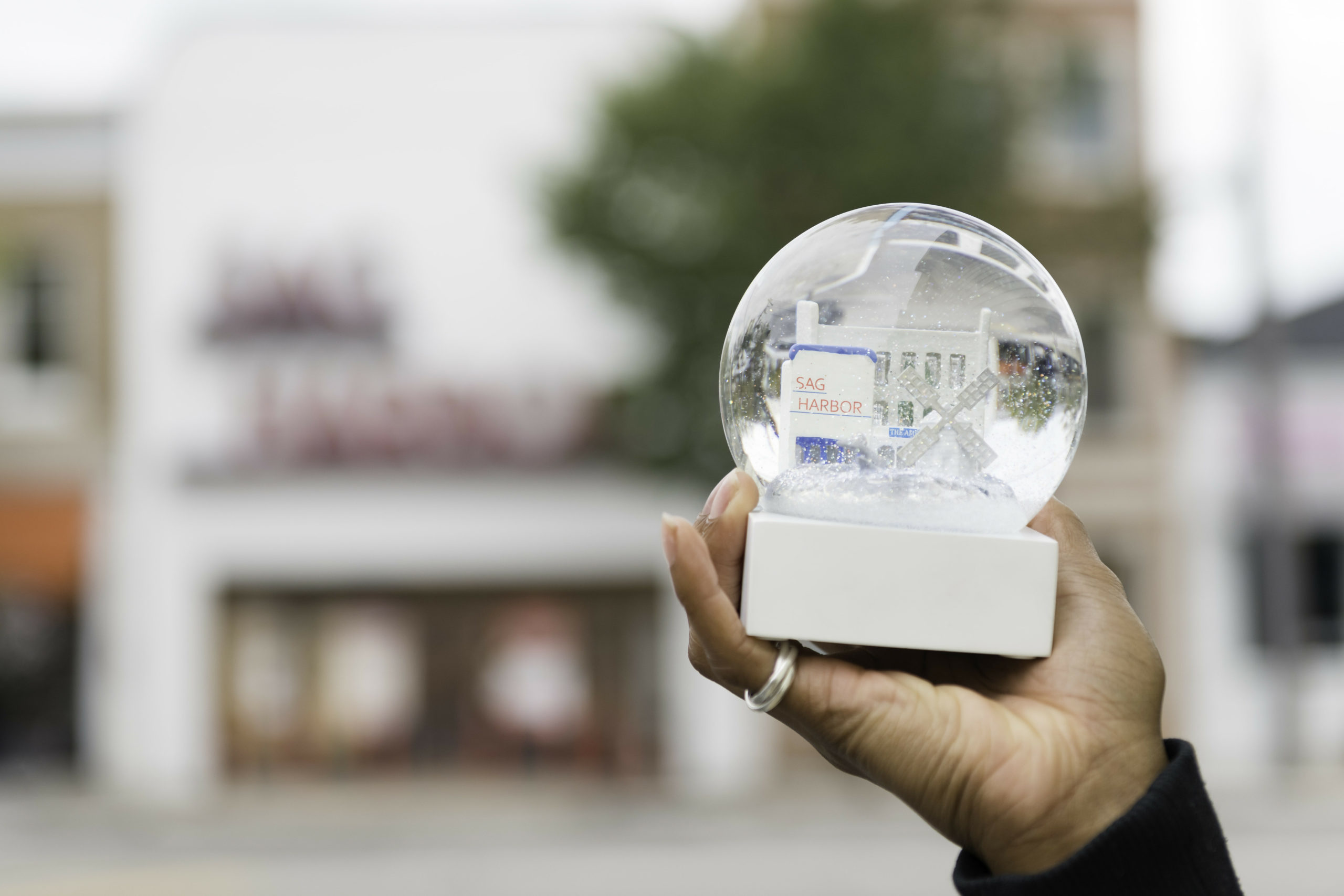 near.main will sell this commemorative snowglobe this holiday season.

Just in time for the holidays, Sag Harbor boutique near.main has just released its exclusive, limited edition Sag Harbor snow globe. The palm-sized globe, which retails for $75 and can be purchased at the store, displays several iconic Sag Harbor images, including the Sag Harbor Cinema, The American Hotel, the windmill, and a pair of baby whales. A portion of the proceeds from the purchase of these bespoke gifts will be donated to the Sag Harbor Cinema restoration.

“The idea came from Annmarie [Gallo, near.main’s owner] about a year and a half ago,” Tia Greene, the store’s manager, said. “She is all about giving our community something different, [so] that they can take away and get that nostalgic feeling. Right when you walk in, you can feel that it’s complementary to our town.” The snow globe offers that same sense of nostalgia, a throwback to the 19th century holiday gifts that were originally popular in Germany and other parts of eastern Europe.

For her part, Gallo felt that the snow globe would be a lovely keepsake for travelers to take home with them, a piece of Sag Harbor that they could visit even when they were far away. “I’m so excited to create a tiny celebration of the village that people can enjoy for years to come,” she said. The store produced a total of 300 snow globes, a third of which have already sold.

On Thursday, December 5, from 5 to 7 p.m., near.main will host a Winter Wonderland event, which will highlight the snow globe. The event will feature light bites, drinks, and gifts to shoppers as a way of saying thank you for shopping local. Near.main’s snow globe project is, in essence, a way to refocus the community on small businesses, and to engage shoppers in some of the retail opportunities that are available only here. The snow globe, for instance, is exclusive to near.main, an item that speaks not only to the town, but also to this specific store within the greater community.

Greene describes near.main as “a loveable boutique that’s just an inviting space. I have people coming in once a week to have coffee with me and share their week. The space is not just for people to buy. It’s for people to come in and get inspired.” Since it opened, in 2017, the store has provided a curated experience, offering a wide variety of gifts, from ceramics to glassware to home accents.

In order to enhance the buying experience — and also to ensure that the snow globes end up at their preferred holiday destinations — near.main has teamed up with Tote Taxi, a concierge service that transports shoppers’ gifts from stores to homes. Tote Taxi provides this service both to homes in the Hamptons and to New York City. There is an additional charge for this service, with which shoppers are offered designated dates. Sign up is available from November 30 through December 14. Deliveries will take place on the 17th and 18th of December.

Considering the fact a third of the inventory has already been sold, it is safe to say that these snow globes will be among the more popular local gift items this season. People have called from as far away as London to reserve them, Greene said. In fact, near.main will accept held orders over the phone for those interested in paying by credit card. It is likely that these snow globes will sell out, in which case interested buyers will have to wait for the next season’s batch to arrive — in 2020.

For Tia Greene, the snow globe signifies a broader view of what it means to support local retailers. Ms. Greene also runs Liebe Public Relations, a business she views as a conduit to building a broader network of locals supporting locals. “I want to inspire people to travel locally and support locals wherever they’re going,” she said. “It’s all about supporting small towns. We’re here to elevate the success of small shops.”