After A Long Hiatus, Sherlock And Company Are Back At SCC - 27 East

After A Long Hiatus, Sherlock And Company Are Back At SCC 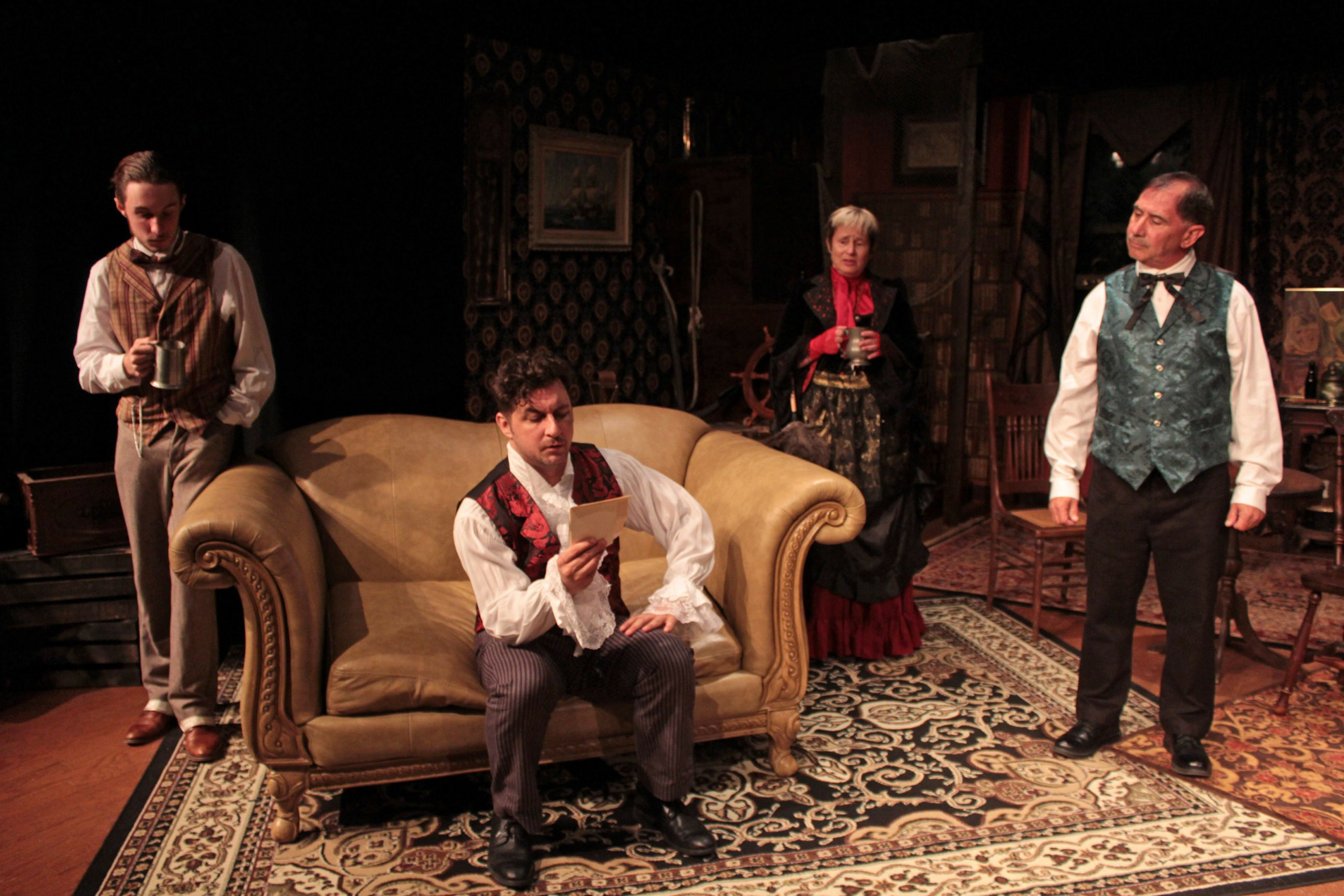 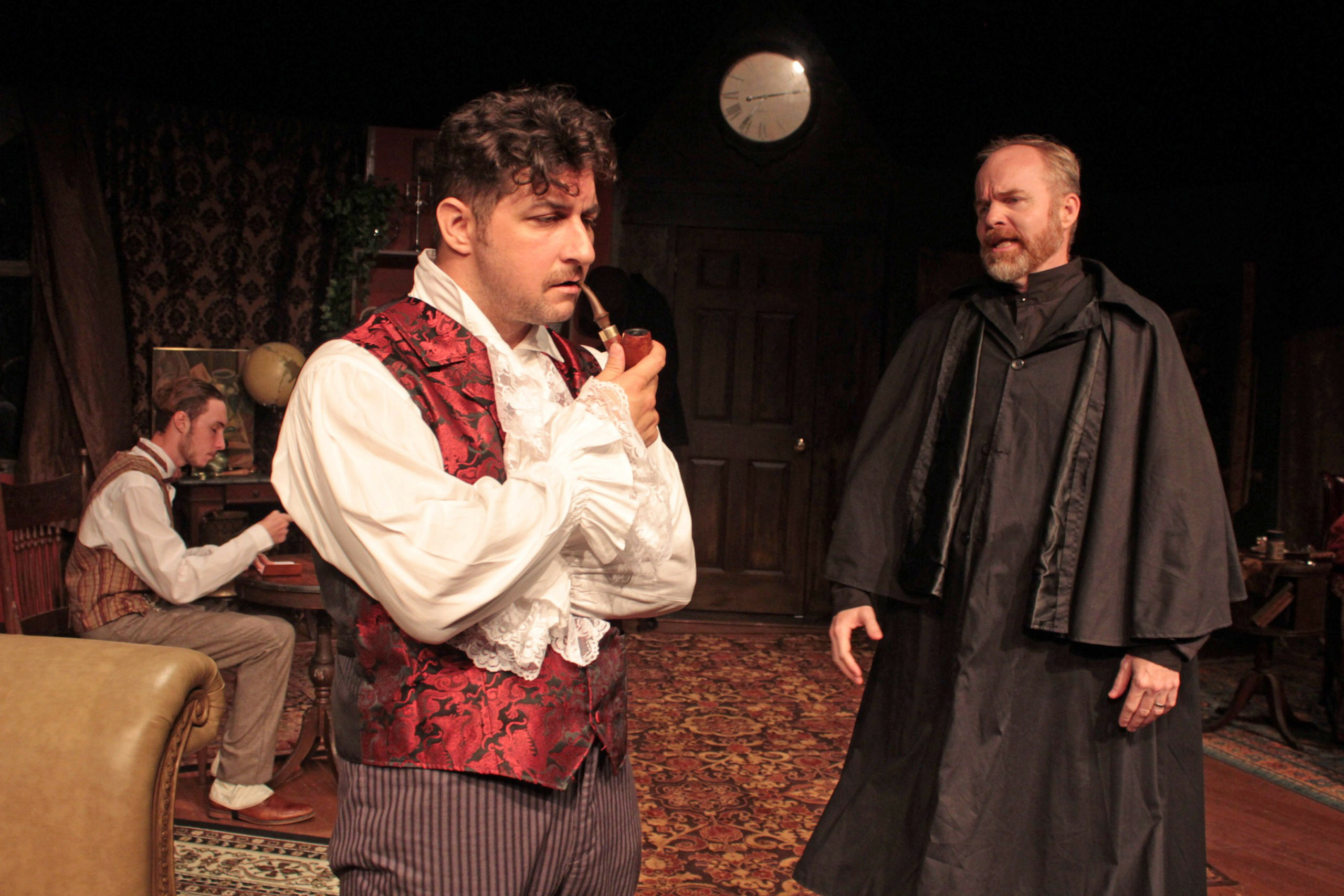 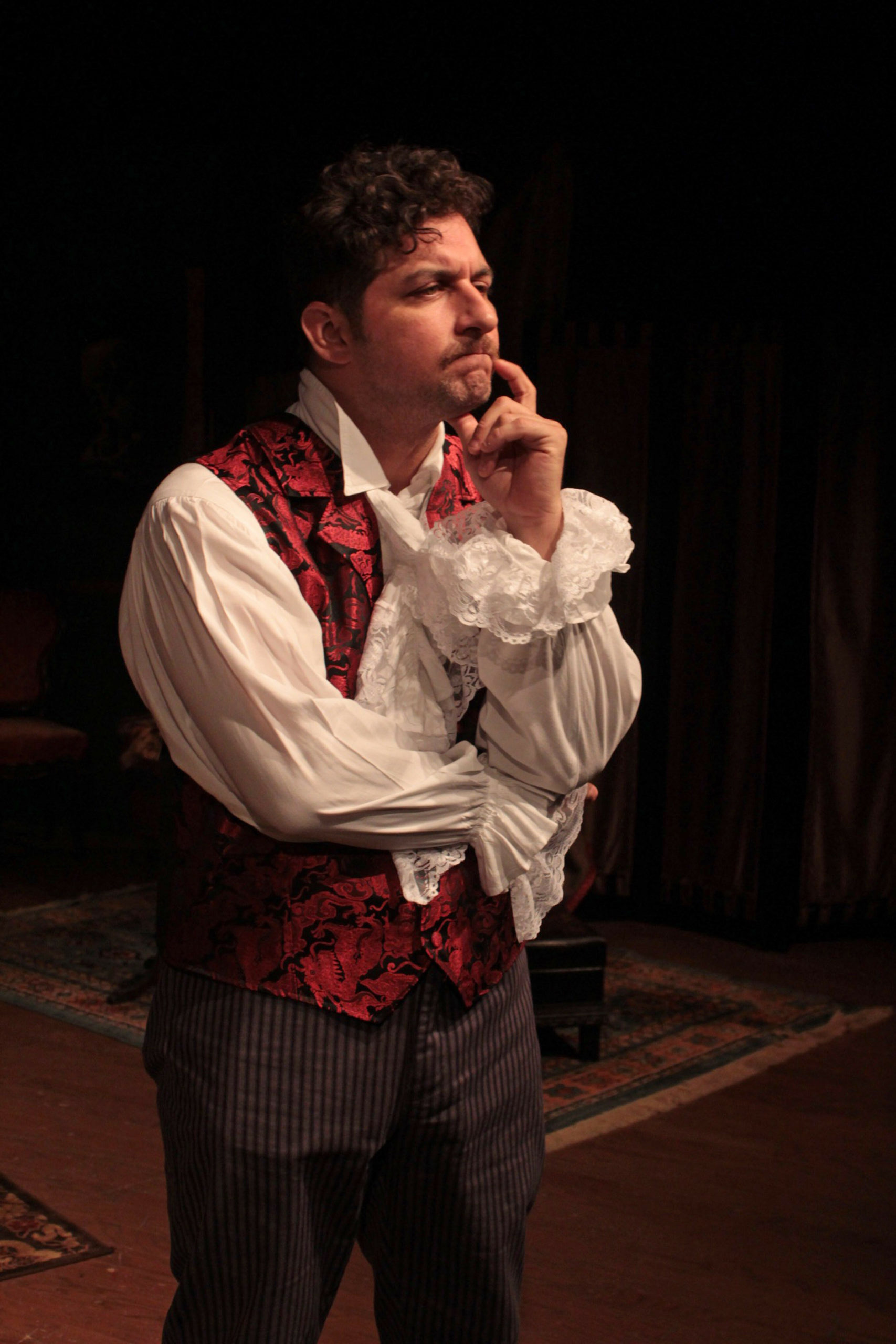 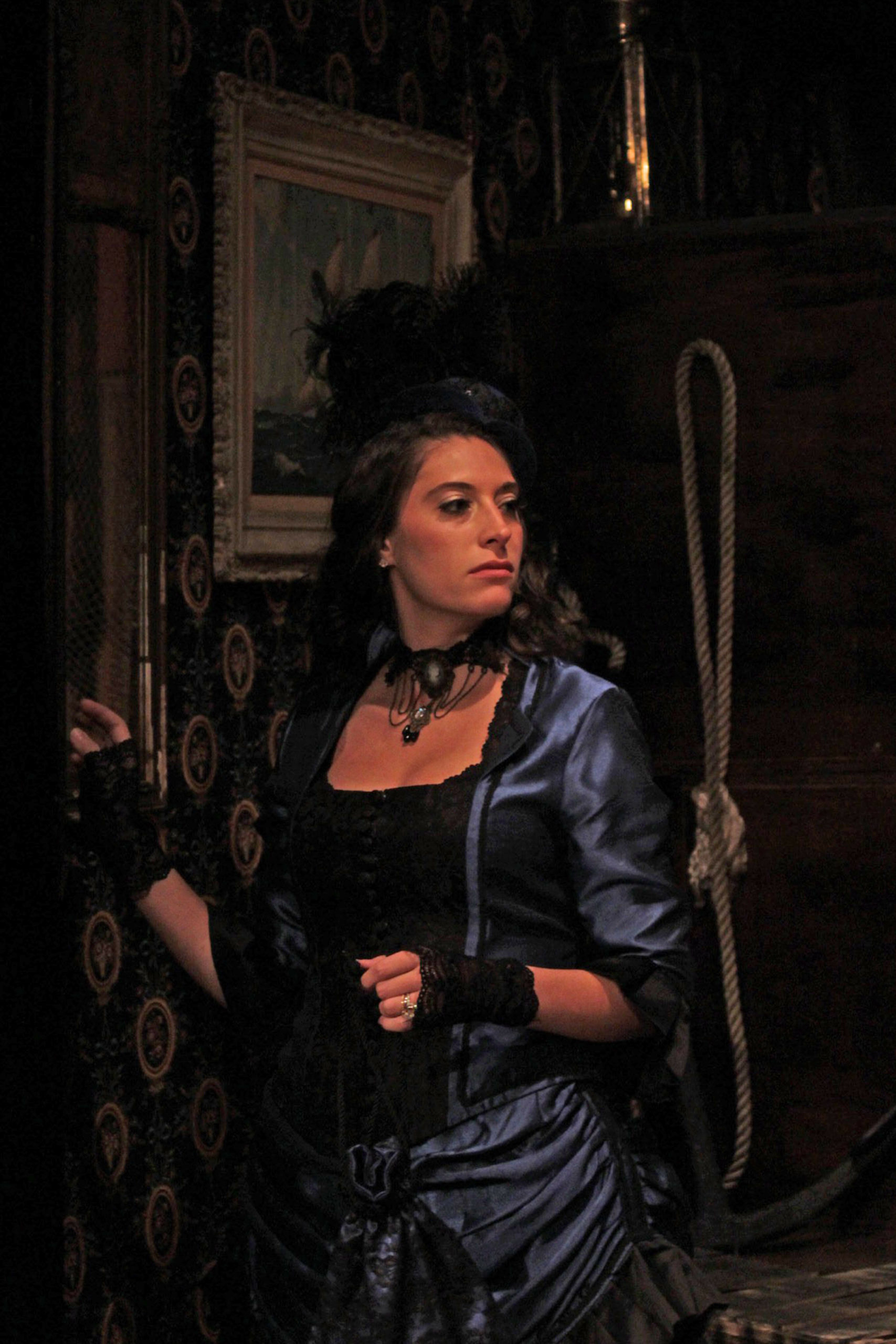 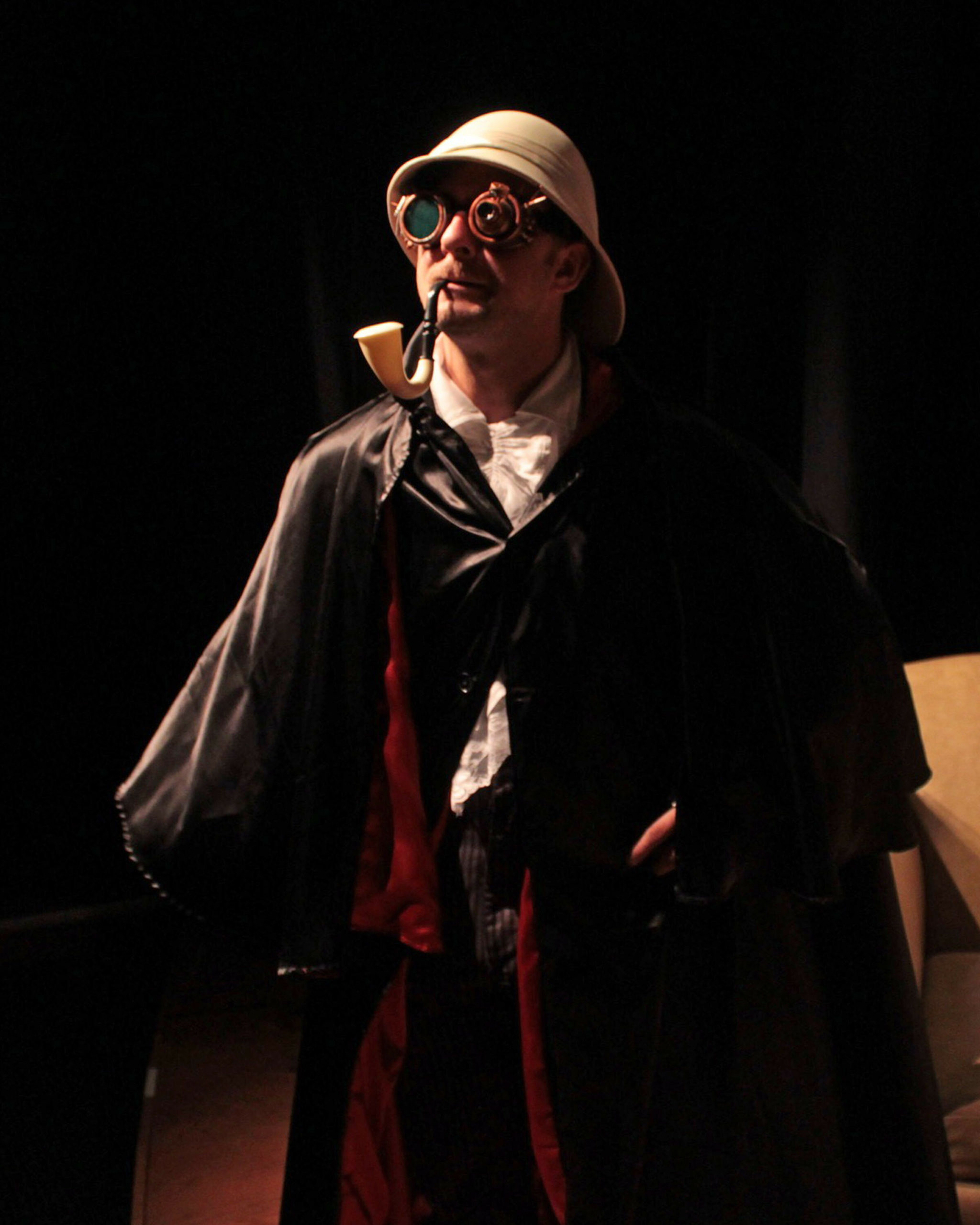 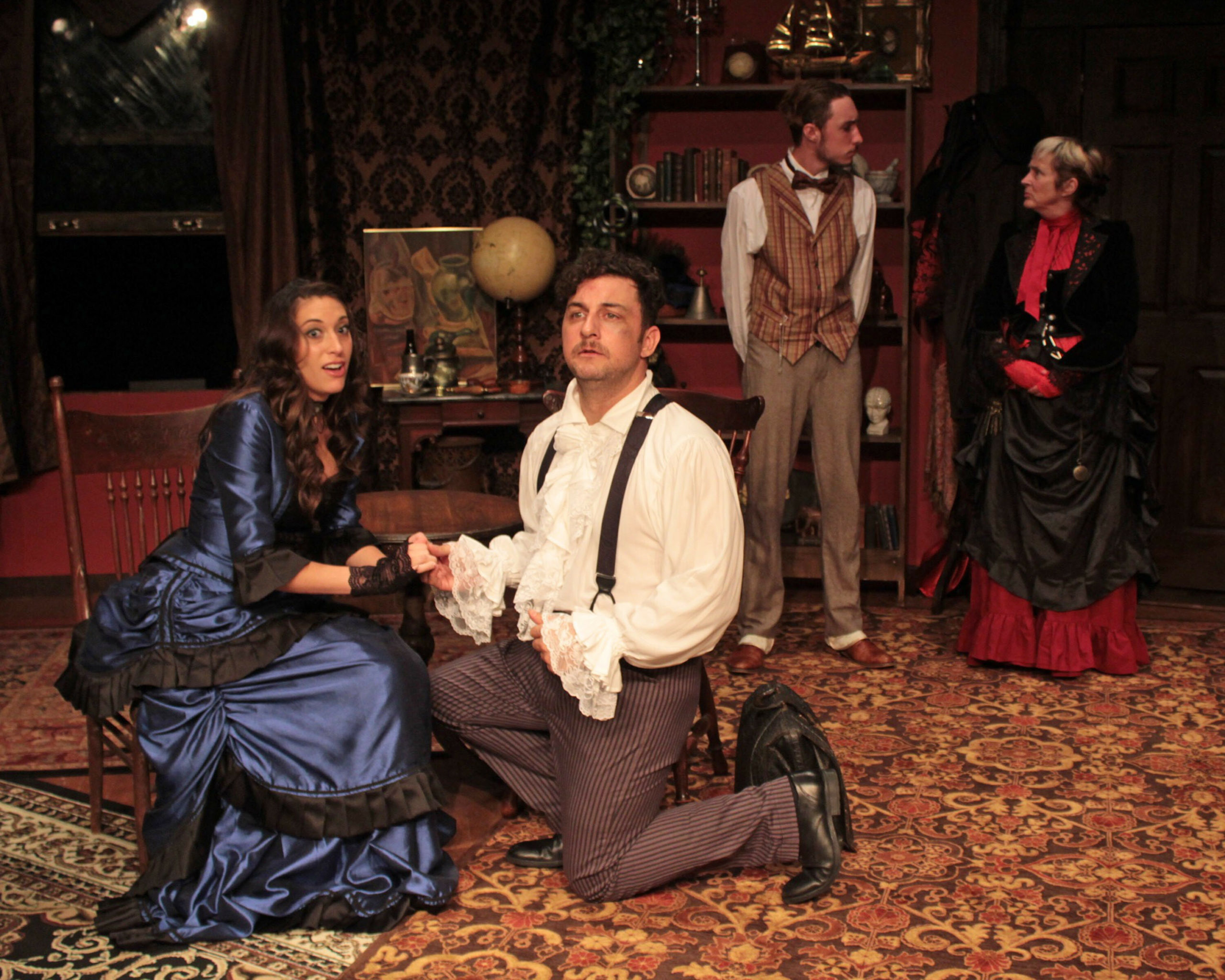 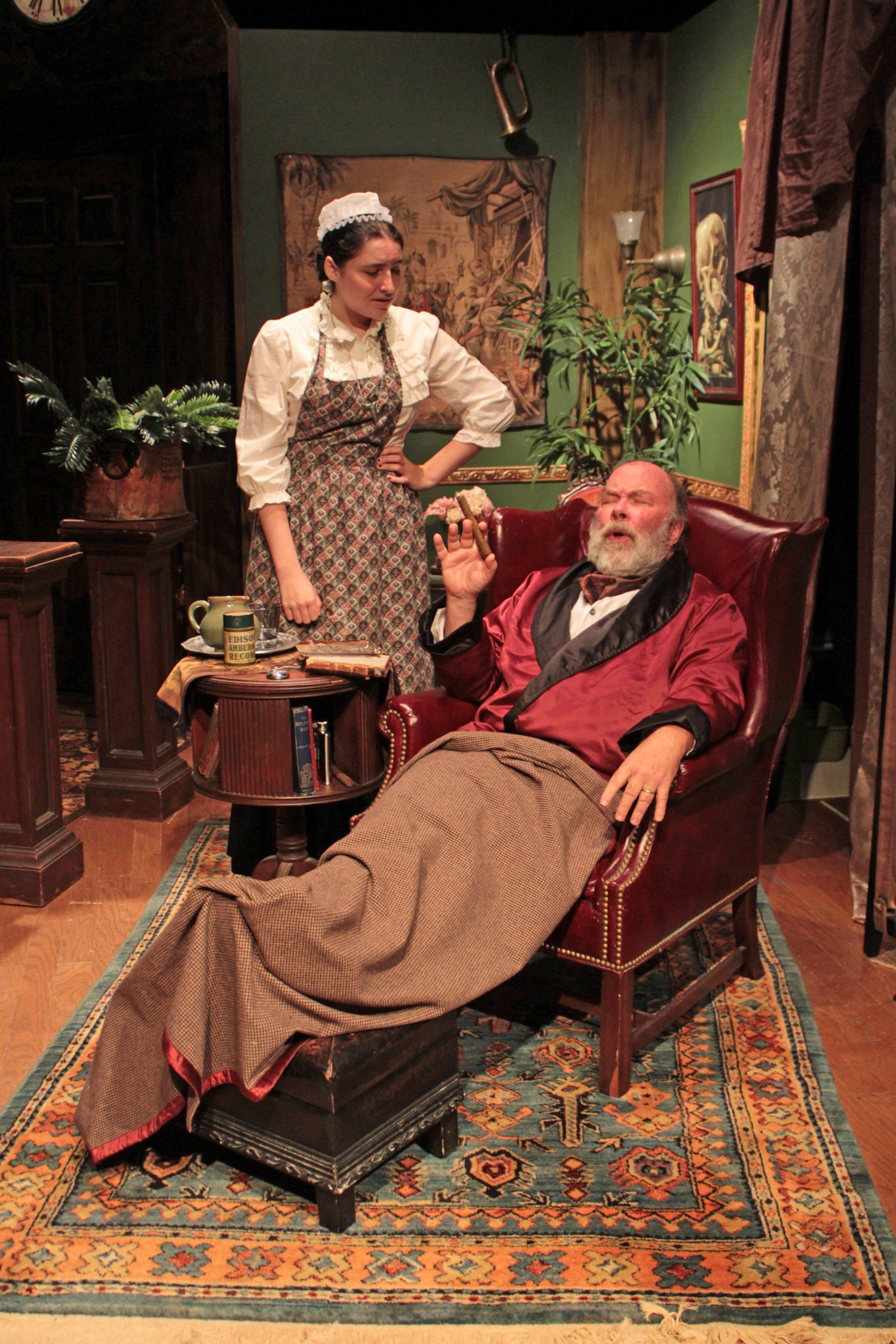 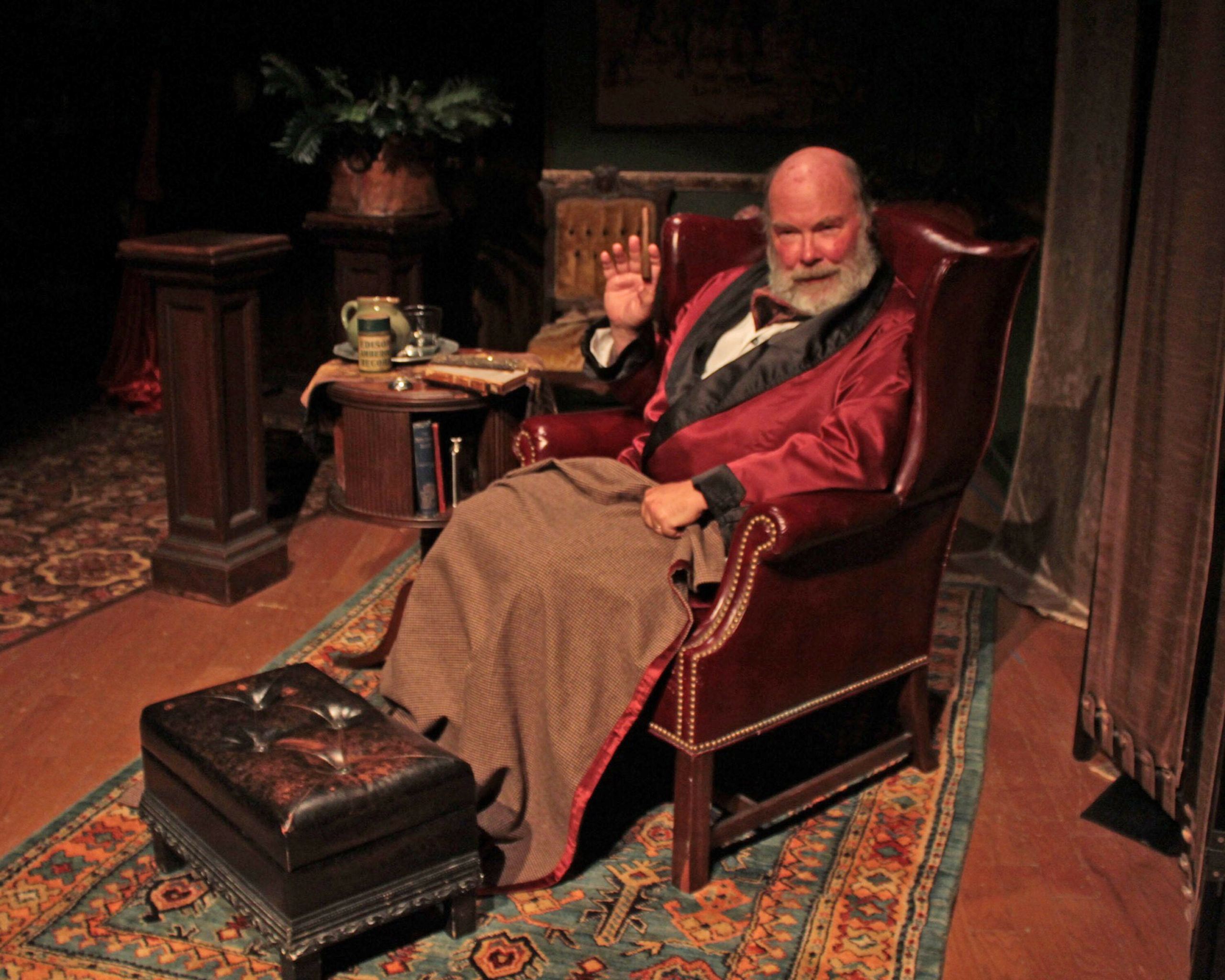 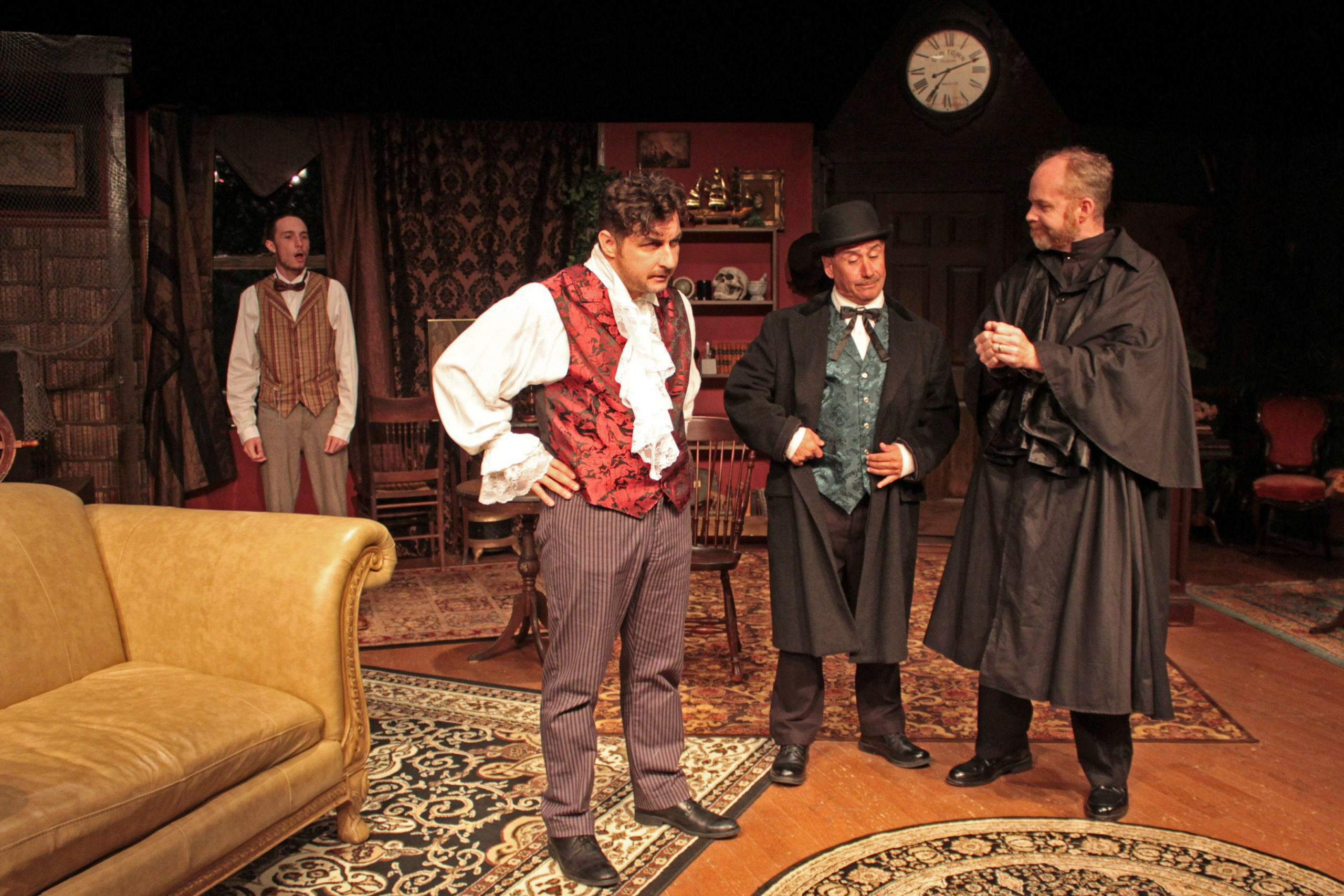 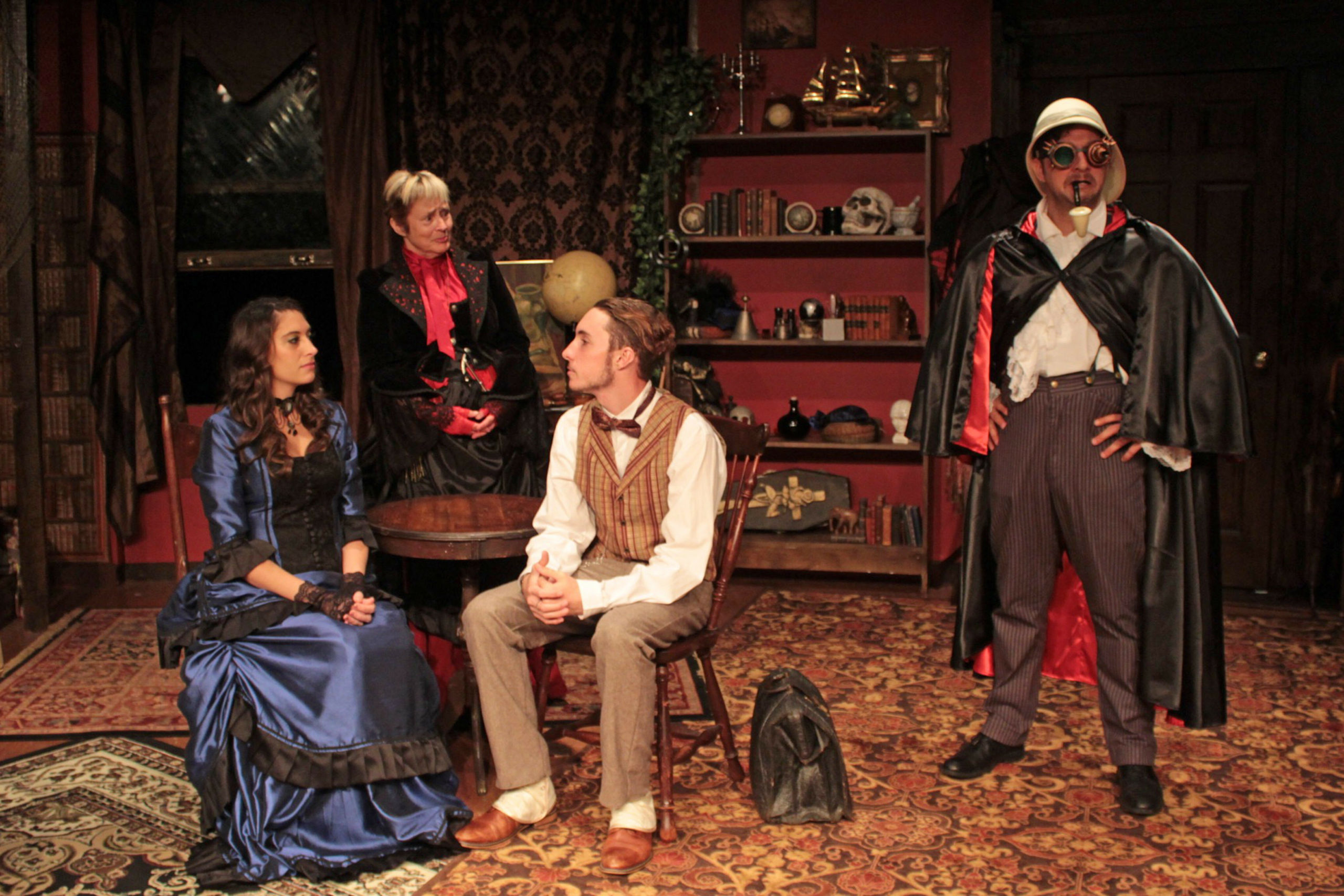 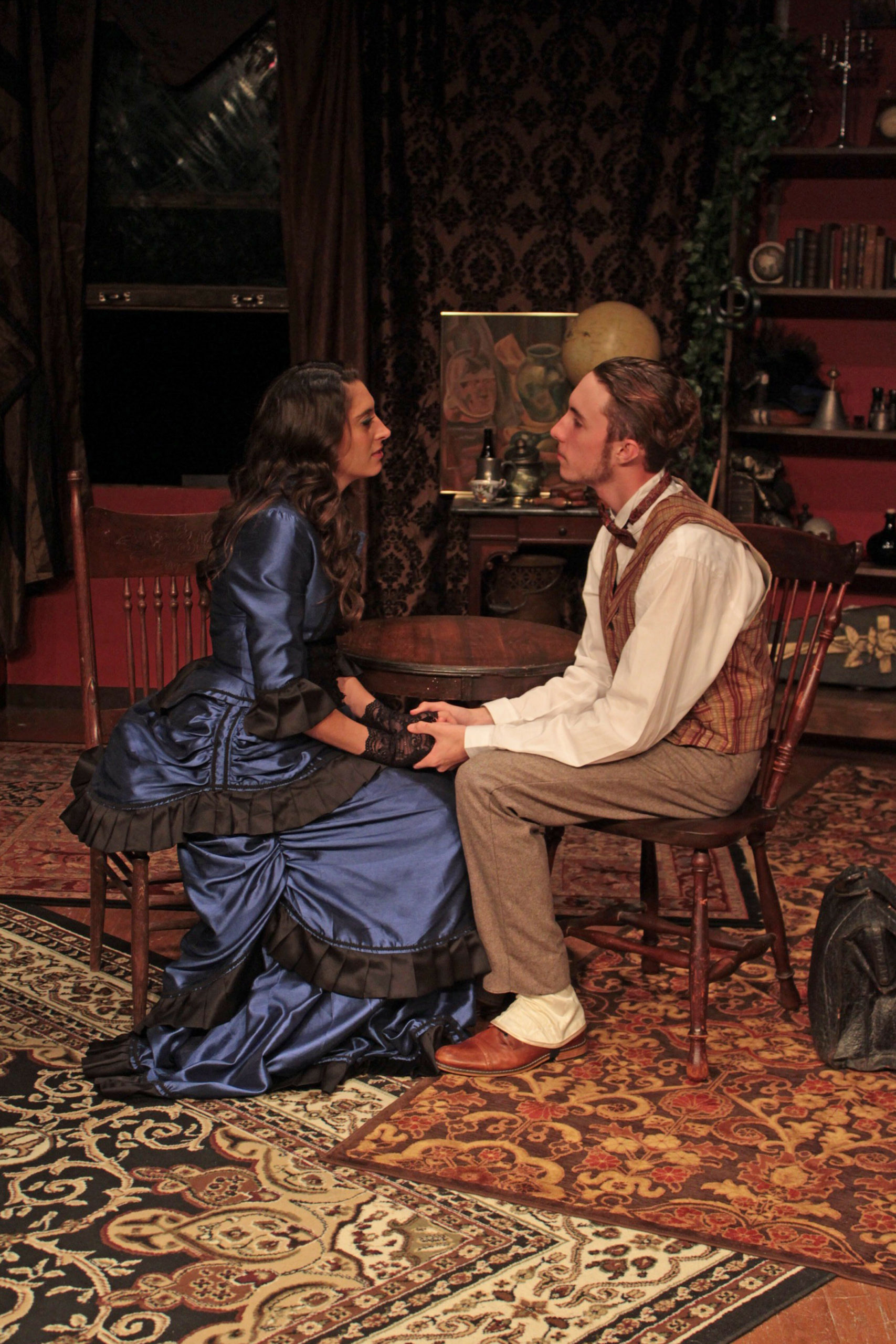 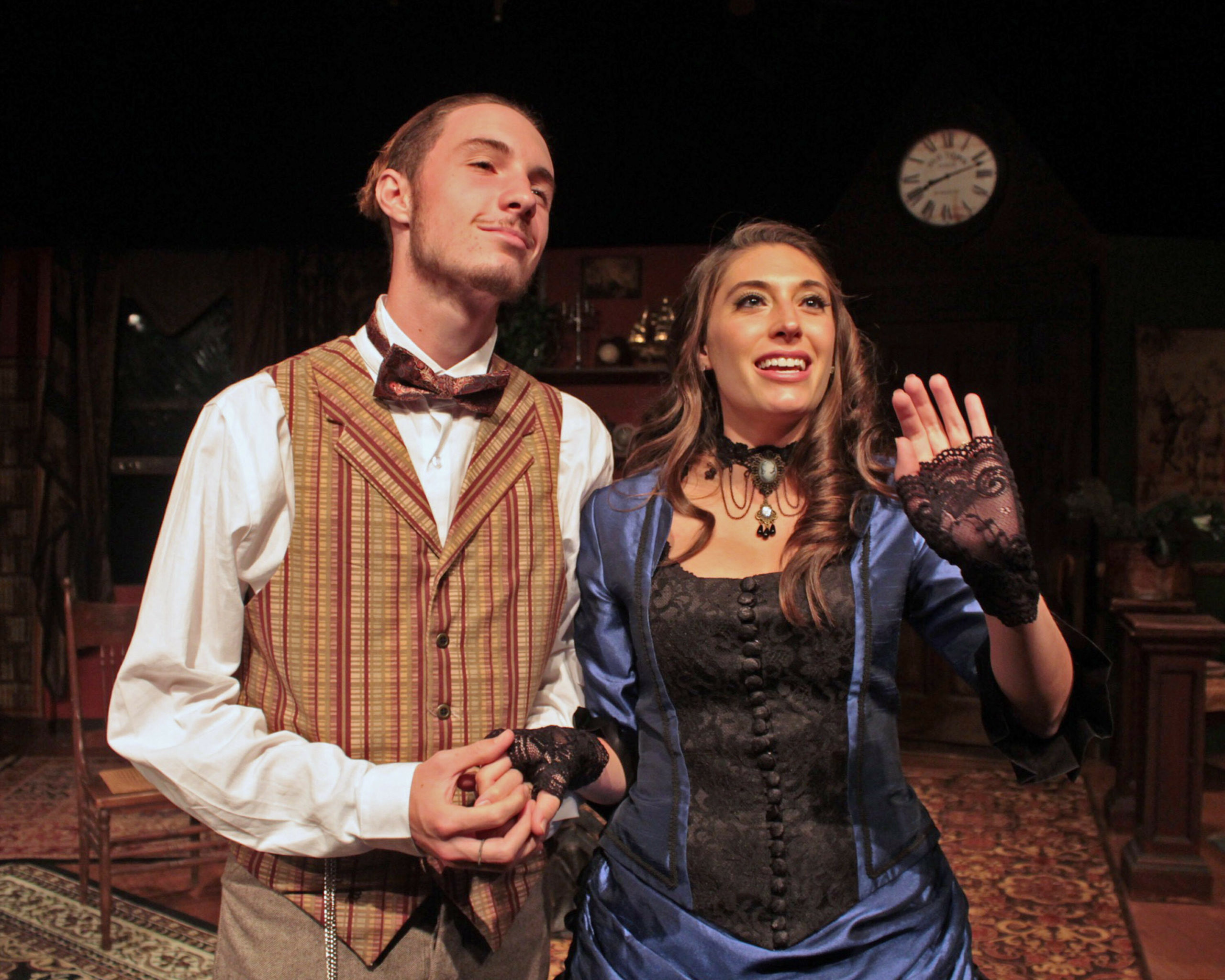 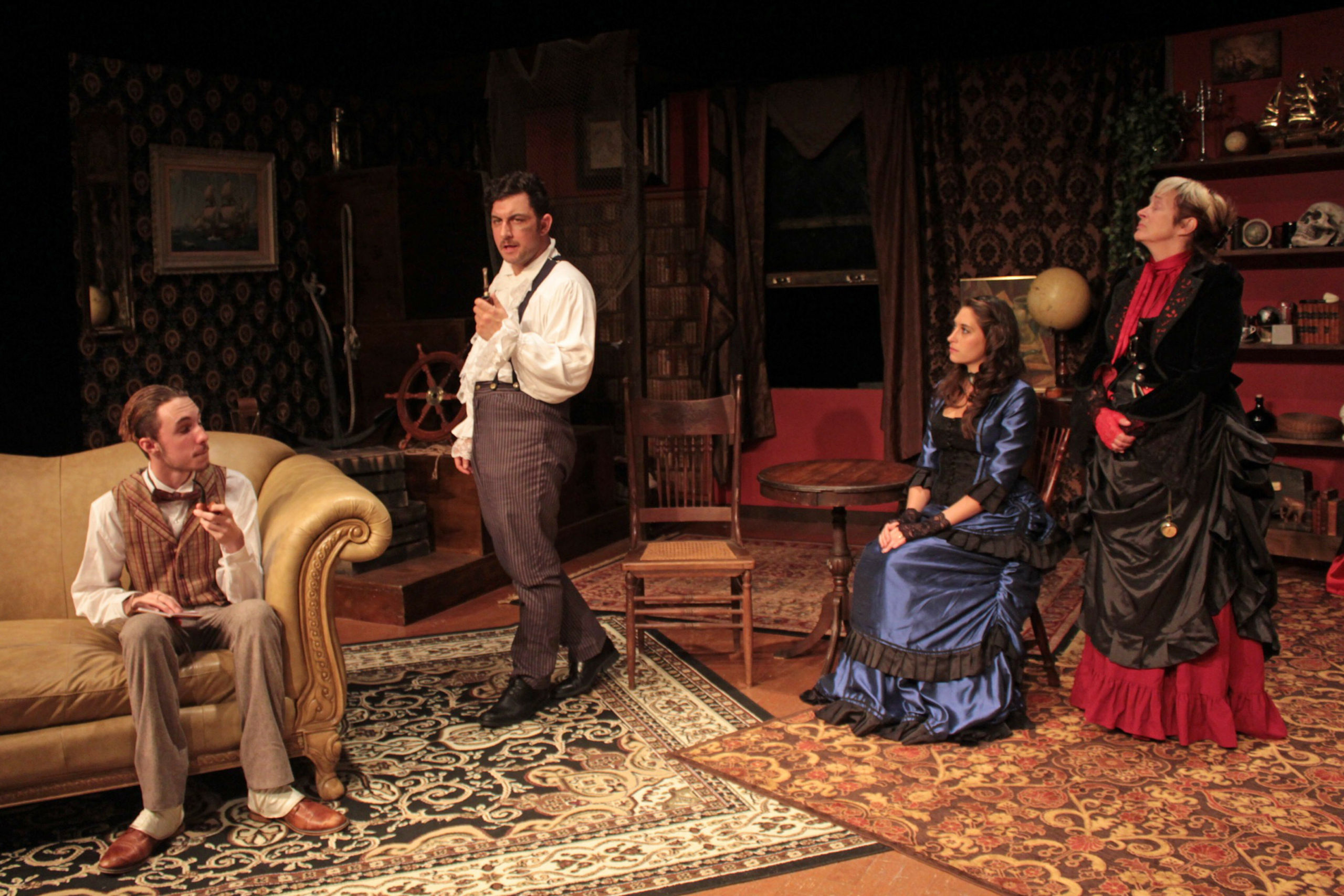 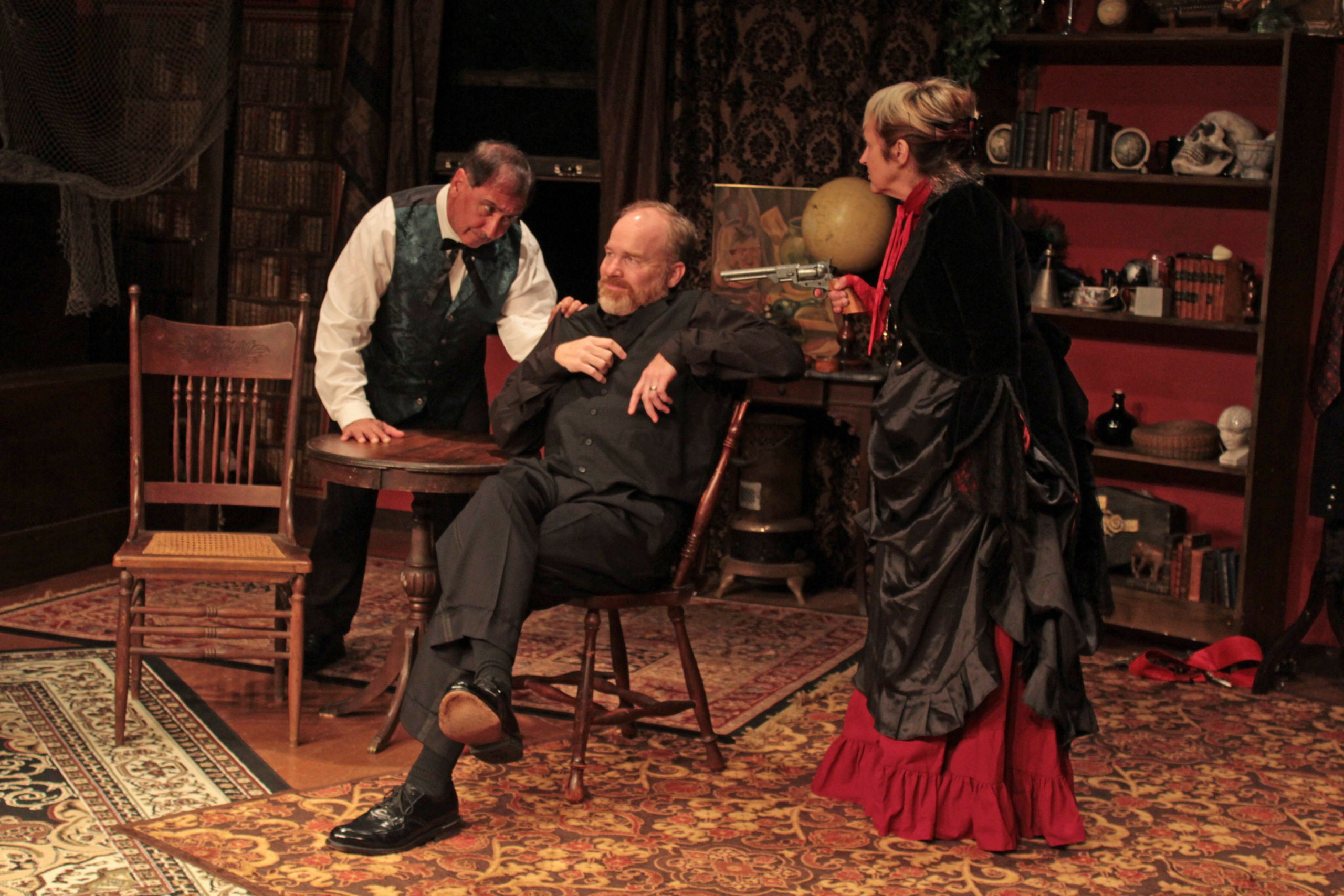 Remember March 2020? It was the month that began normally enough, and then at about at the halfway point, everything changed when COVID-19 took hold and life as we knew it ground to a halt.

That included theater, and in early March at the Southampton Cultural Center (SCC), Bonnie Grice and members of her Boots on the Ground Theater troupe had just completed a successful first-weekend run of their newest production “Sherlock’s Secret Life,” a 1997 play by Ed Lange that offers a modern take on the Sherlock Holmes story.

Then the world shut down, the set went dark, and Grice, her fellow actors and director Josephine Teresi-Wallace, hunkered down for the long haul. They have been in a holding pattern ever since, thanks to the unpredictability of life during a pandemic.

“Once we were a month into it, we knew it was going to be more long term than short term,” Teresi-Wallace said.

“I was thinking, we’ll come back in April, then maybe May, then maybe the fall,” Grice said. “Then I realized this isn’t going to happen till 2021.”

But now, the day is here. On Friday, September 17, “Sherlock’s Secret Life” returns, once again, to the SCC stage. The play, which runs through October 10, tells the story of an older Dr. Watson reflecting on his earlier adventures with Sherlock Holmes. Watson takes the audience back in time as he revisits Holmes’s very first case involving Marianna Smith, a mysterious, beautiful young woman who has lost her memory, and the famous sleuth’s nemesis, Professor Moriarty.

While the script remains the same as the earlier run, there have been a few changes in the production since March 2020. That’s because while the cast and crew have been waiting in the wings for their cues to go on, life got in the way.

“For the most part, the cast was on board, but then at some point there are obligations to meet,” Teresi-Wallace explained.

One cast member, teenager Thomas Schiavoni (who played the young John Watson) graduated from Pierson High School this past June and recently went off to SUNY Purchase to begin his freshman year of college.

“Originally, Thomas was intending to commute to do the show because he wanted to do it so badly,” Grice said.

Instead, the role now belongs to Schiavoni’s classmate, Lance Schroeder.

“He and Lance are buddies, and it’s a perfect fit,” Grice added.

Another cast member, Alyssa Kelly (who plays Marianna Smith) has a newborn baby girl at home and for a while, Grice and Teresi-Wallace weren’t sure whether she would be able to stay in the role given the baby’s pending due date.

“Over the past year, we kept saying she’s having the baby, when its due?” said Grice.

“Originally, we were going to open the show sooner, we asked if that would be a problem, and she’s like, ‘No, that’s fine, I’ll be up and ready,’” added Teresi-Wallace. “Her baby was two weeks late. If we had gone on in August, she wouldn’t have made it.”

“She would been giving birth on stage,” laughed Grice.

Three additional members of the original cast weren’t able to commit to the new time frame, including Dan Becker (older Watson), Bethany Trowbridge (Mollie) and John Lovett (Professor Moriarty), who have been replaced by actors Ken Dorph, Zoe Richardson and Mark Heidemann, respectively. Grice, herself, rounds out the cast as Mrs. Watson.

“You're sad to see some people go with such a successful weekend under our belt, but luckily, between Bonnie and I, we know a lot of people,” Teresi-Wallace said.

When asked to compare and contrast the relative disadvantages and advantages of having an unexpected 18 months between the show’s opening weekend and this reprisal run, Teresi-Wallace said, “The disadvantage to me is not having your full cast back. At that point, I had directed a show and we had opened. I had done my job and they were so great on stage.

“But that was balanced by the advantages in terms of time,” she added. “You have more time to think about what you would do differently.”

Another major advantage is having the set still in place. It remained intact after SCC went dark in March 2020 and has been there ever since.

“We didn’t have to take our set down. We’ve utilized it in the past couple months, creating character flow on stage,” Teresi-Wallace said. “We touched base every month to do read-throughs starting in May, then we started rehearsal in early August. Sometimes, you don’t get your set until a week before. You don’t have time to get comfortable with your footing and by the time the show closes, you’re ready to open. It takes you a while to get used to the atmosphere and the real estate.”

“To have the actors be able to use the set for this long is remarkable,” Grice agreed. “The costumes were done and all set too. Zoe, the girl who plays Mollie, is a student from Pierson and she said, ‘Wait, the costumes are here?’”

“To me, this like a second home. I come in and were excited to get back and get our creative juices going,” Teresi-Wallace added. “Everyone is great. The script and the cast is phenomenal.”

Because Grice is not only the producer of the play, but also an actor. She explained that another benefit of the added time off was the fact that it gave her an opportunity to really delve into her role.

“For me as an actor, it gave me time to think of my character, Mrs. Hudson,” Grice said. “I’m finding an attitude she didn’t have last year, even her costume I’ve changed a bit. I feel like I’m getting into character more. Jo is one of the best directors you could work with. She’s a mama bear and her comedic timing is impeccable.

“I’ll always be in gratitude to Bonnie,” Teresi-Wallace countered. “She’s the one who encouraged me. For me as a director, the story line is not what I thought about. It’s a different creation. You go with the energy of the actors. I want my actors to be so comfortable with the verbiage that it’s second nature.

“It’s such a benefit. The characters have been able to live in that space and work in the space for months.”

Boots on the Ground Theater’s production of “Sherlock’s Secret Life” runs Friday, September 17, through Sunday, October 10, at the Southampton Cultural Center, 25 Pond Lane, Southampton. Shows are Fridays at 7 p.m., Saturdays at 2 p.m. and 7 p.m., and Sundays at 2 p.m. Tickets are $30 (students $20) at SCC-arts.org.