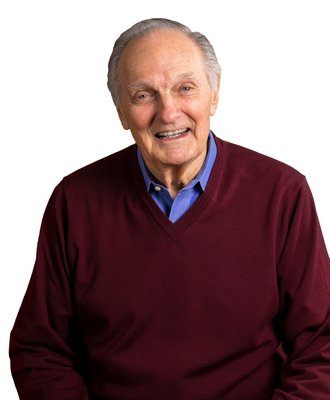 When a cab driver in New York City questioned Mr. Alda about the distance to his intended destination before agreeing to allow him in the car, instead of getting angry, Mr. Alda patiently showed the driver on his phone that it wasn’t too far.

In the end, the cabbie agreed to the fare, and along the way he and Mr. Alda became friends rather than adversaries.

Soon, Mr. Alda learned why the driver was initially so reluctant to take him to his destination: It turns out he was badly in need of a restroom.

The story of that social experiment is included in Mr. Alda’s 2017 book, “If I Understood You, Would I Have This Look on My Face? My Adventures in the Art and Science of Relating and Communicating,” along with his firm belief that practicing empathy is one of the best ways to improve communication with our fellow man (and woman).

With high season arriving on the East End, Mr. Alda says that using empathy in encounters with overly aggressive drivers can be equally useful, if only to keep oneself calm, cool and collected on a hot summer day.

“It was a surprise to me that it works,” said Mr. Alda in a recent phone interview. “My wife, Arlene, keeps saying, ‘You don’t have to explain the other drivers to me. I see what they’re doing.’ But the more I think about what they’re going through, the easier it is to accept reality. Sometimes I do get a little flash of anger—I need to practice anger management—but it helps me to remember that empathy.

“Empathy is not the same thing as compassion or feeling sorry for someone,” he added. “I use it as a tool for making myself clear. What’s the point of talking to someone if they’re not getting it?”

Since the dawn of humankind, communication has been a key skill to the survival and success of the species. But as methods of sharing thoughts and ideas have expanded and grown, so, too, has our base of knowledge, opinions, beliefs and the ability to express them.

“I think there’s always been this problem that a lot of people call the ‘curse of knowledge’—knowing something so deeply and in such detail you forget what it’s like to be hearing it for the first time,” Mr. Alda said. “Something close to that insight was written by Maimonides in the 1100s. We get entranced with what our particular detailed knowledge is, and sometimes the details were so hard to arrive at in our own studies, they seem important, but the person we’re talking to isn’t ready for details.”

Now, we’re in the digital age, and despite the fact there are myriad apps and devices with which to share and receive information, it often seems as if communication has broken down entirely.

Communication and the way in which we use it effectively—or not—has long been a subject of interest to Mr. Alda, which is why he is launching “Clear+Vivid,” a new podcast that it is an outgrowth of his book. The series kicks off with an event on Wednesday, July 10, at the National Press Club in Washington, D.C.

The 20-to-40-minute bimonthly podcasts will feature Mr. Alda in conversation with some of the most effective and influential communicators of our time—experts in a range of professions. Guests for the inaugural season of “Clear+Vivid” include violinist Itzhak Perlman, and comedian, producer and writer Sarah Silverman, whose Hulu series, “I Love You, America,” features the famously liberal Ms. Silverman venturing deep into Trump territory in an attempt to find common ground with residents there.

“They’re not on the same page, but they become friends,” Mr. Alda said. “Sarah Silverman has some fascinating stories.”

“I wanted very much—and the producers do as well—to show that there are people in every field who touch us in every part of our lives,” Mr. Alda explained. “I’m even interviewing a hostage negotiator.”

When asked if there are some consistent traits that he has found to be universal among all great communicators, Mr. Alda responded, “I think being personal is very important. Telling stories is important. Being authentic and who you are, vulnerable and acknowledging not having all the answers.

“If you know your subject well,” he continued, “you should be able to tell the stories well.”

While coming to a conversation confident and thoroughly versed in your subject is one key to being an effective communicator, being able to interpret body language is another—something Mr. Alda came to learn through his training as an actor.

“The bigger part is being able to read the other person or people. If you can read them, you’re there,” he said. “It’s strange, because it’s built into all of us, and we all hunger for communication, because we’re very social animals. Yet we take refuge in anonymity and solitariness—and I don’t know why. We’re afraid it will be a burden to be open with someone, but in most cases it’s a happy time.”

Mr. Alda’s keen interest in the topic of communication first began when he hosted the PBS television show “Scientific American Frontiers” and interviewed hundreds of the world’s greatest scientists. Sometimes, he admits, the message of these very intelligent individuals could be difficult for the average person to understand.

“It wasn’t that I saw scientists couldn’t communicate, but it was how well they could communicate when we made it personal and related it in the ways I’ve described—not through conventional interviews with a list of questions, but rather as a conversation,” he said. “If I didn’t know something, I would admit it.

“I was asking them questions that represented a total misunderstanding of their work,” he said. “When I took the chance to appear as ignorant as I was, things got a lot better.”

That experience was the impetus for the creation of the Alan Alda Center for Communicating Science, which was established at Stony Brook University in 2009. The mission of the center is to empower scientists and health professionals to communicate complex topics in a way that those not in the field can better understand. Last year, Mr. Alda founded the Alda Communication Training Company (ACT) to offer communication training through programs and workshops for those in STEM fields and other disciplines.

“We’re expanding the program and we’ve trained over 12,000 scientists and doctors around the country and five other countries,” he said. “Every day, we’re getting more requests, not just for workshops but a series of workshops from the government and NASA. It’s just wonderful.

“There’s a tremendous need for it. Science is not getting funded in the same way it did, and it’s much more difficult for scientists to raise funds for their work,” Mr. Alda added. “They have to be better communicators.”

But in this era of heated rhetoric, at times, getting the other side to see your point of view seems next to impossible. Does Mr. Alda truly believe it’s possible to extend empathy to people with vastly different—and sometimes hateful—political views?

“Yes. I think we’ve always had a need for better communication,” he said. “There are plenty of circumstances now where we need it more than ever. The Fourth of July holiday is coming up, and people will be seeing each other for the first time since the last horrific Thanksgiving dinner. It is possible to talk to people who disagree with you in the most extreme way.

“Even if your argument is true and the other side doesn’t have the right information, you aren’t going to convince them,” Mr. Alda said. “In the podcasts, the stories we explore will all illustrate what it takes to relate to people in a way that’s fundamental.

“For all these reasons and many more, that’s why I’m starting the podcast.”

Subscribe to “Clear+Vivid” with Alan Alda for free on Apple Podcasts or visit alanalda.com.

In addition to the launch of his new podcast, at 6:30 p.m. on Sunday, July 22, and Monday, July 23, Mr. Alda will join the Bridgehampton Chamber Music Festival by offering a composer portrait of Felix Mendelssohn and his equally talented, but virtually unknown sister, Fanny, through their own words and letters. Mr. Alda’s narration will be interspersed with musical compositions written by both Felix and Fanny. The concert will be held at the Bridgehampton Presbyterian Church and tickets are $55 and $75 ($10 for students). To purchase, visit bcmf.org.

On November 5 and November 6, head back ŌĆ£Into The WoodsŌĆØ with the young actors ... 25 Oct 2021 by Staff Writer

Rob Sedgwick, author of ŌĆ£Bob Goes to Jail,ŌĆØ will offer an in-person reading of his ... by Staff Writer