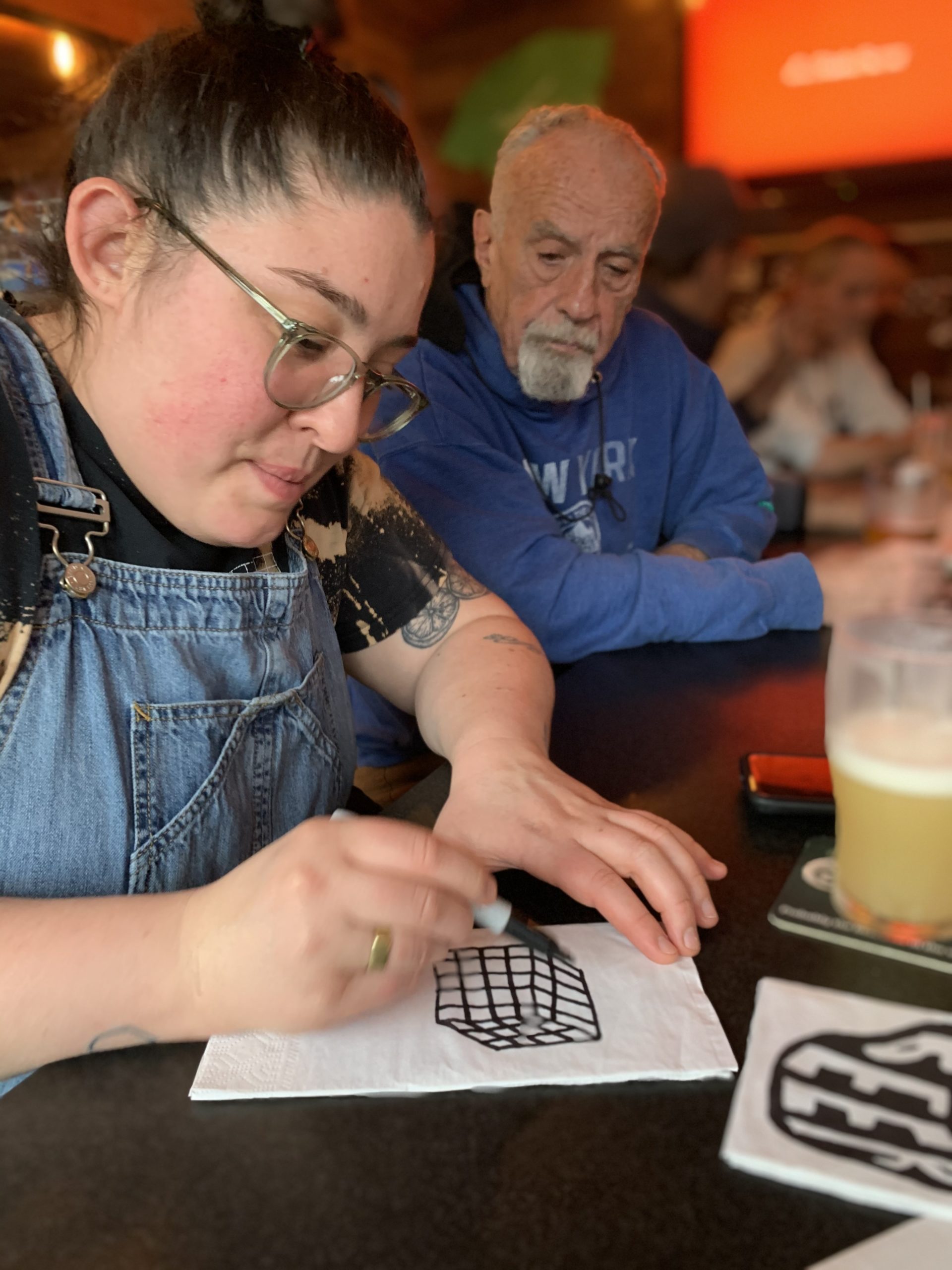 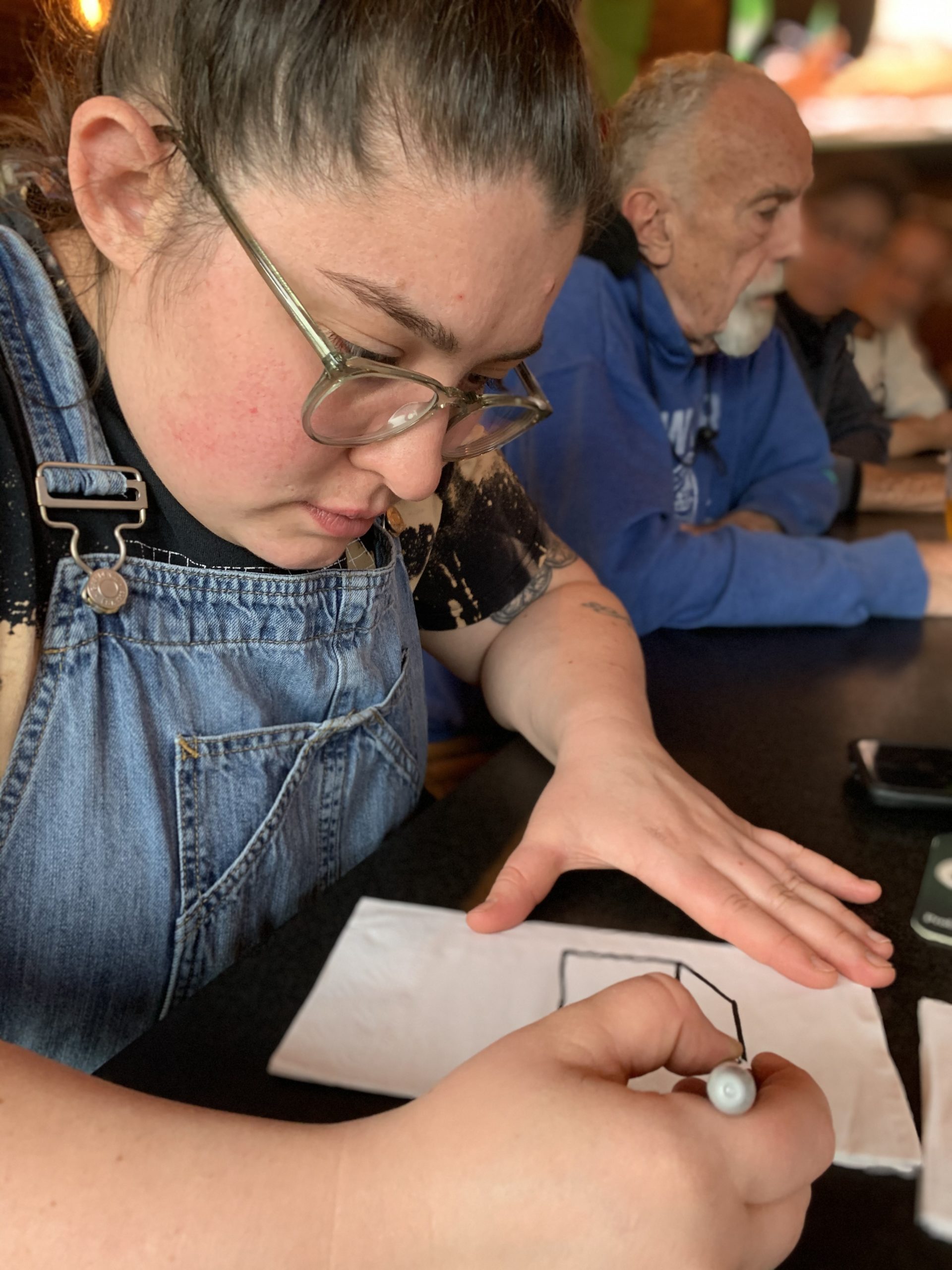 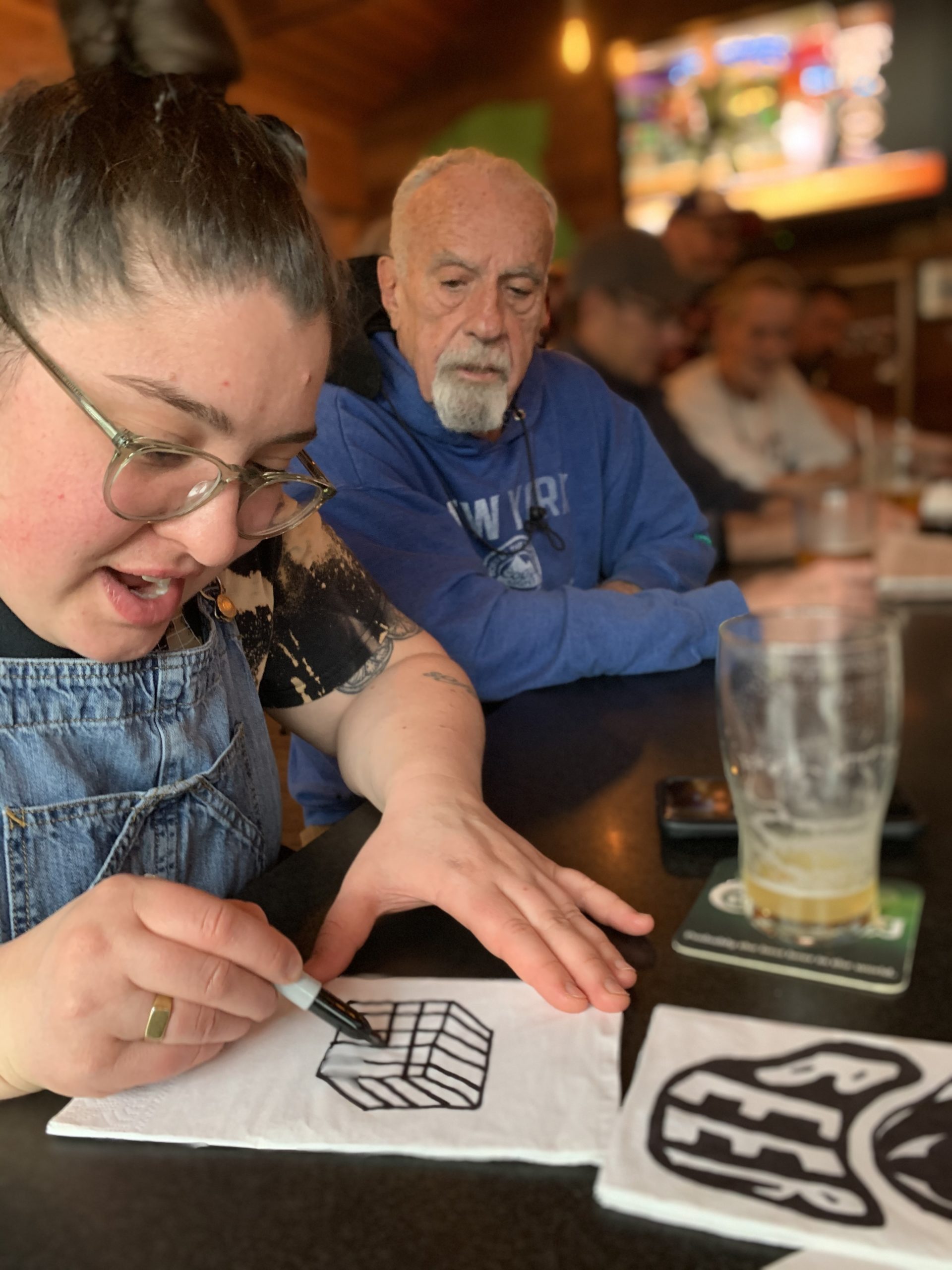 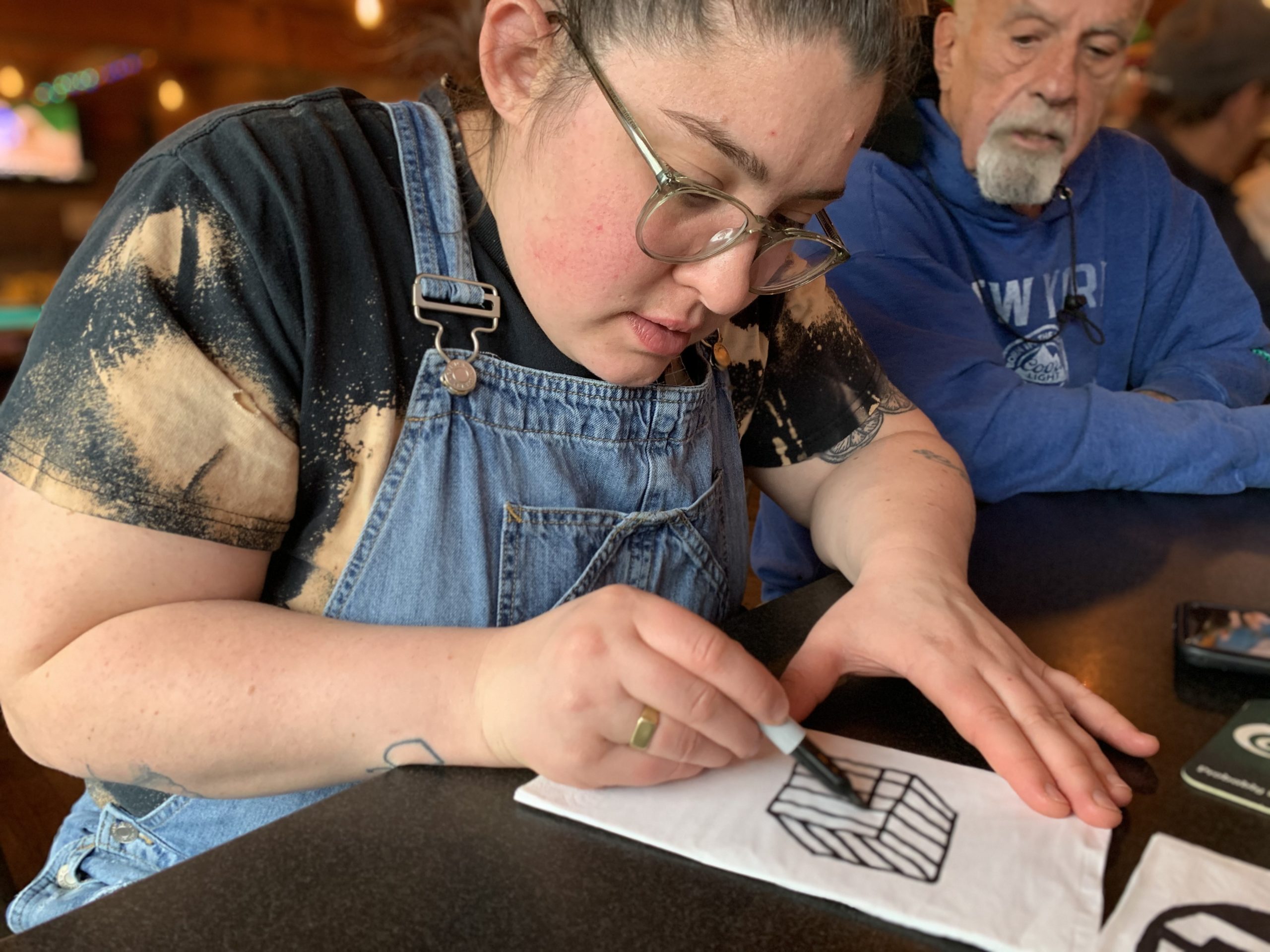 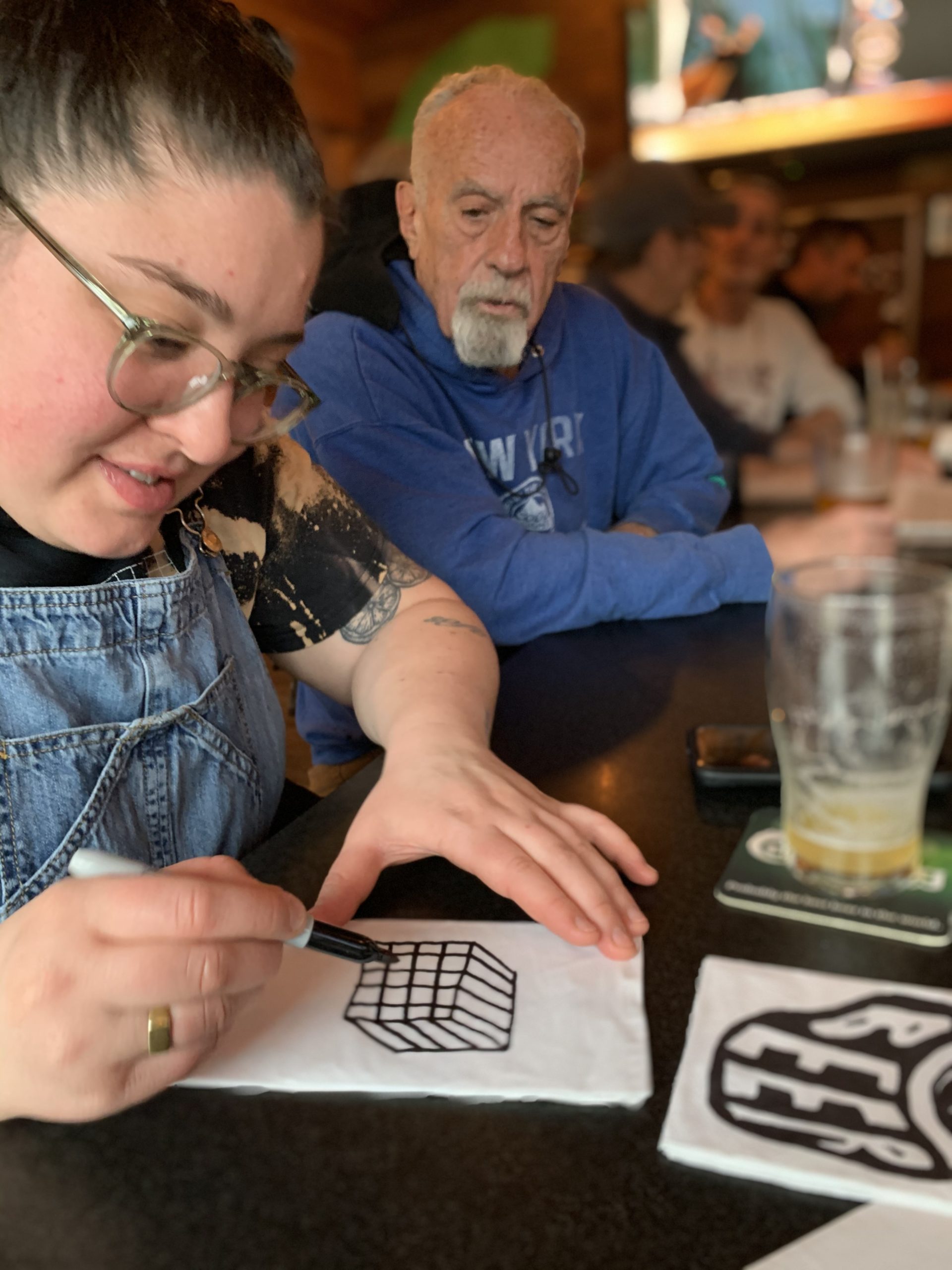 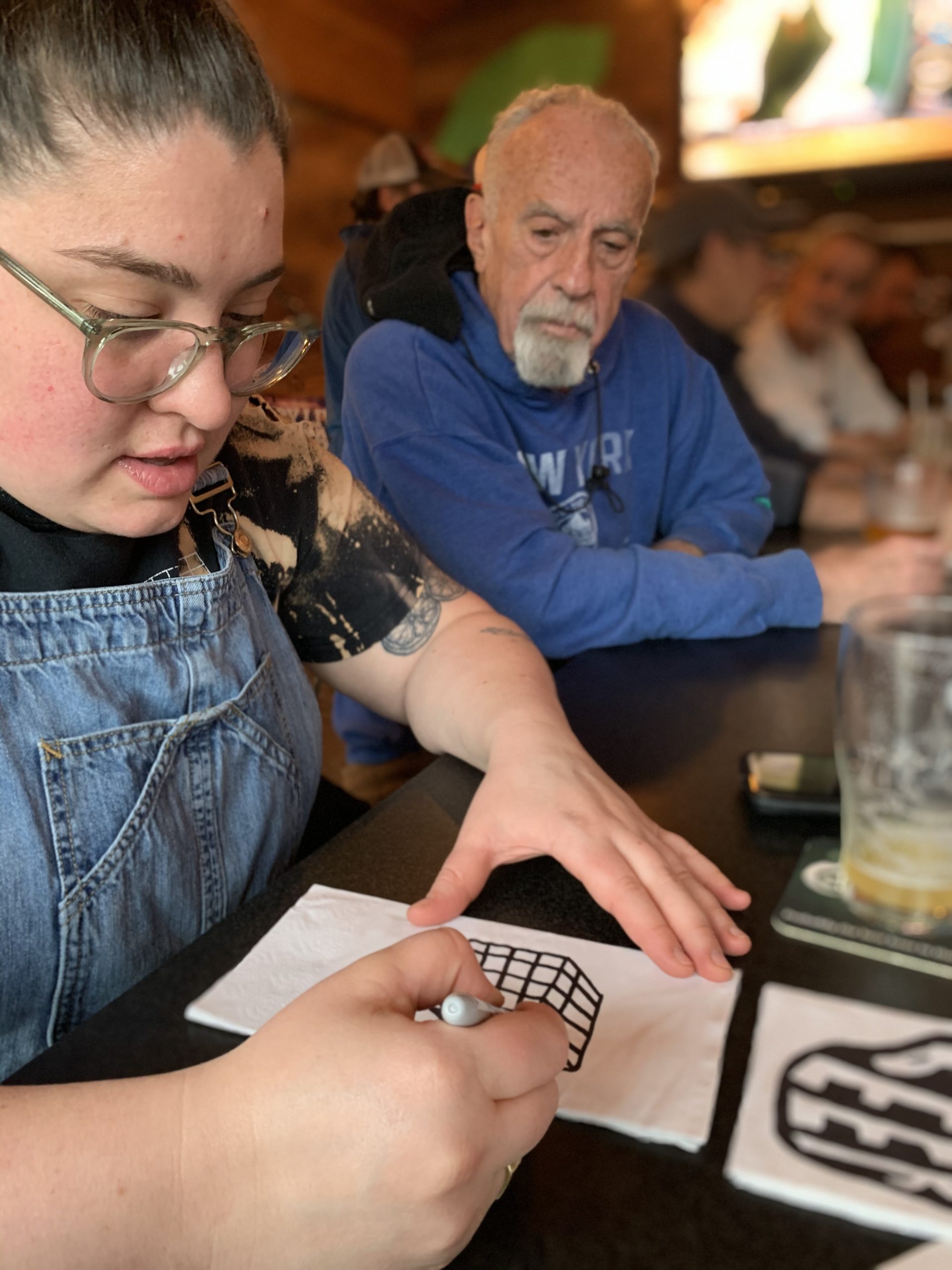 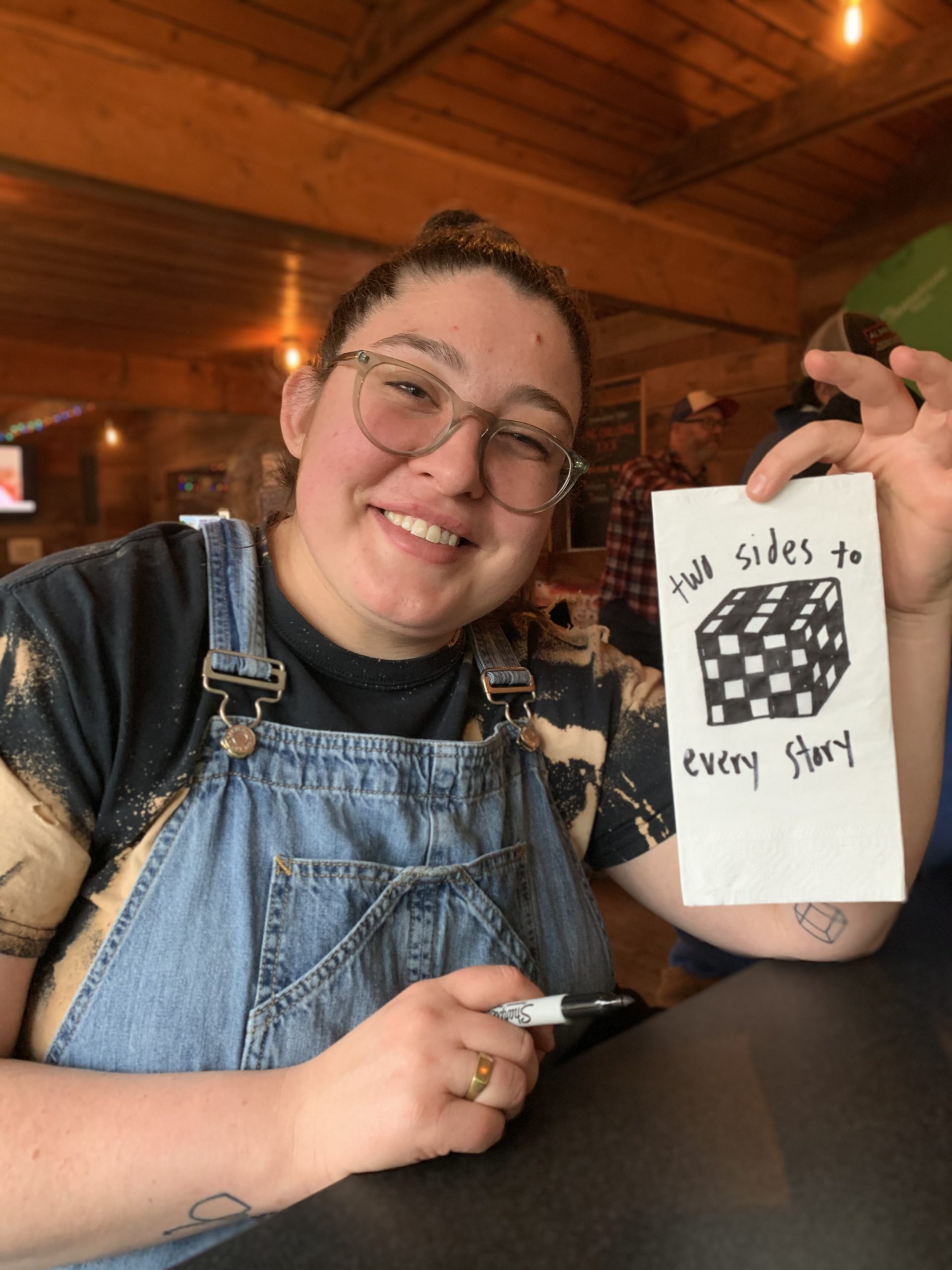 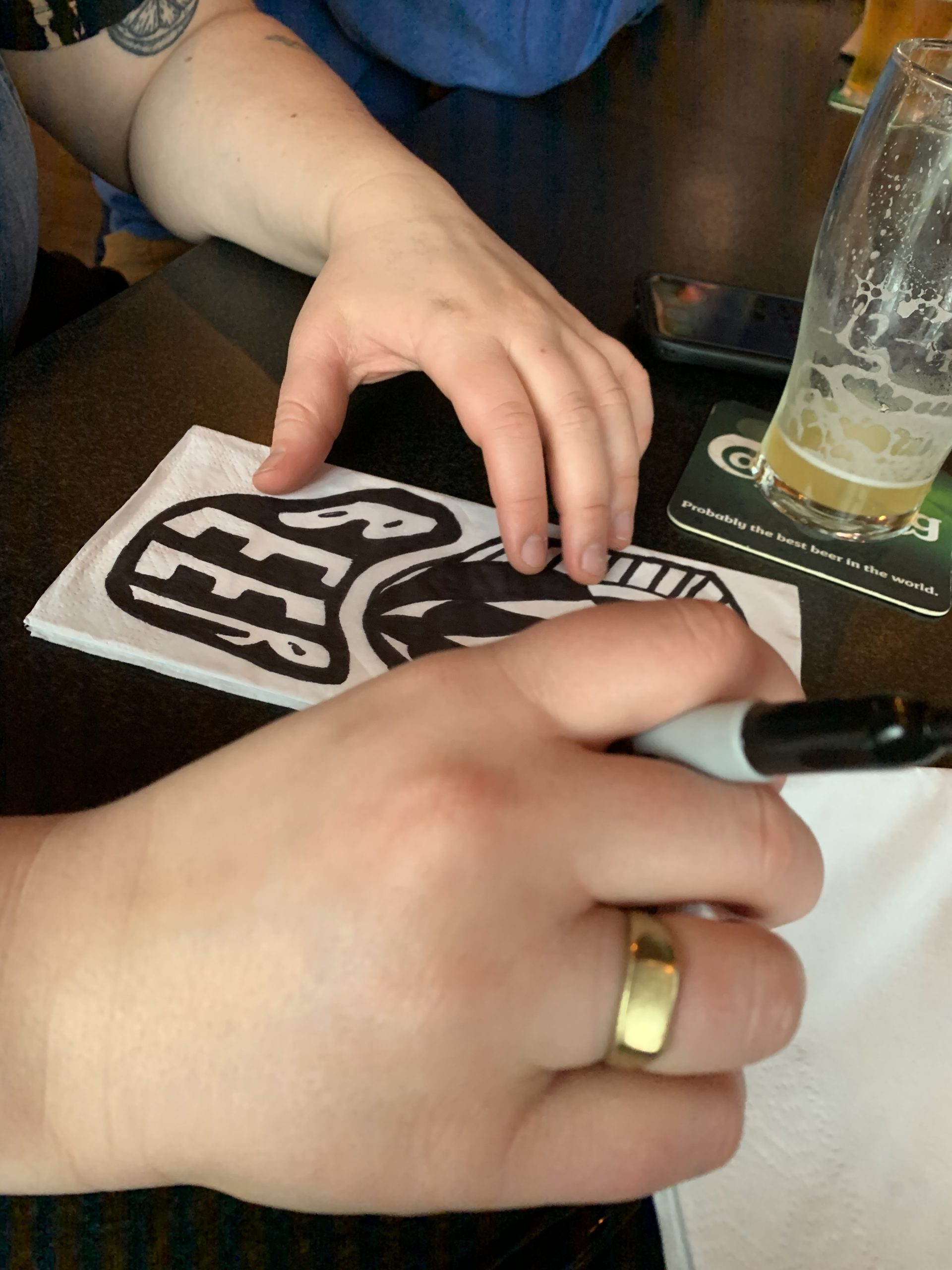 Brianna Ashe drawing on a napkin at Townline BBQ. 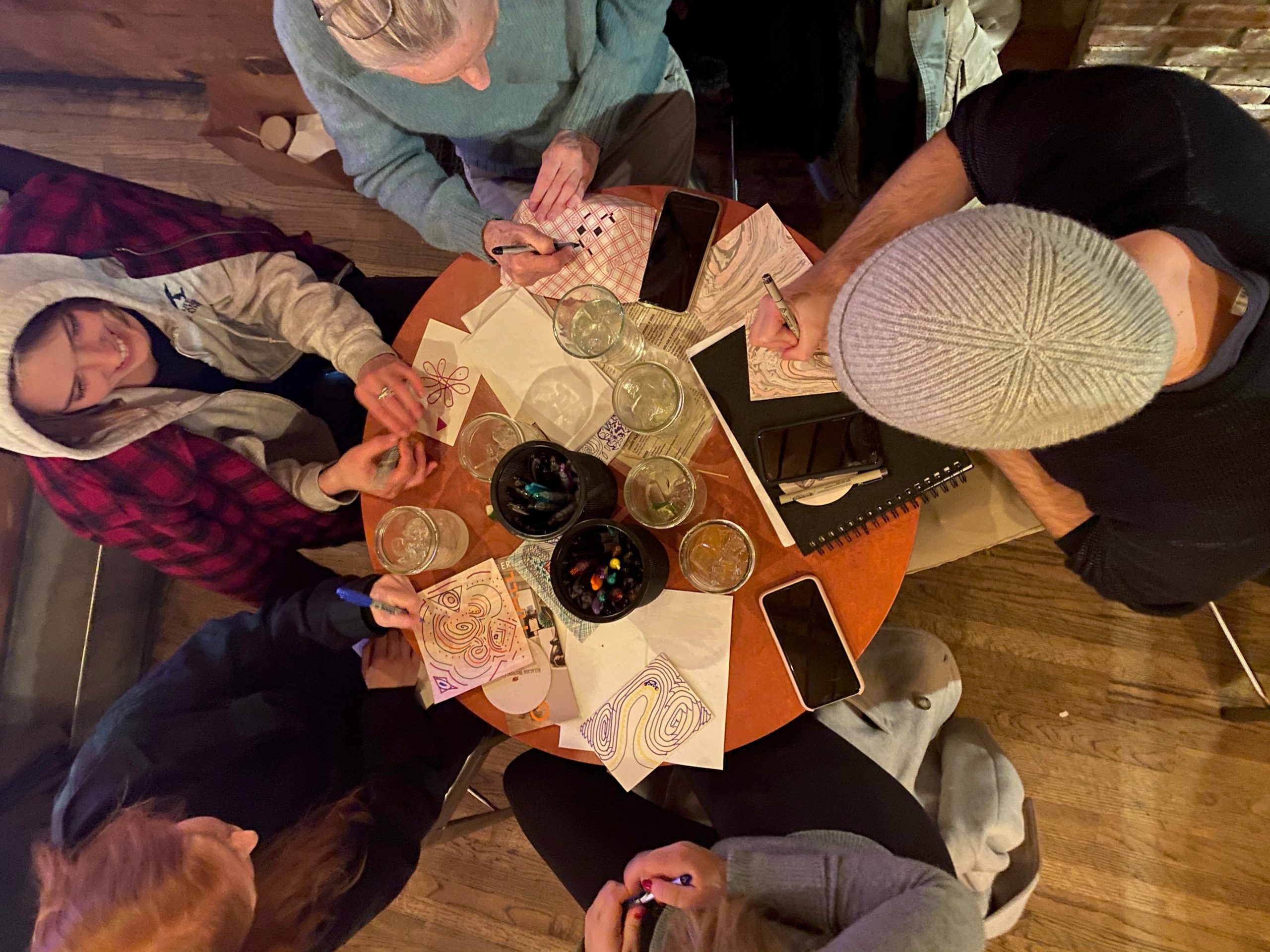 A group of budding artists gather for a recent drink and draw session at Townline BBQ. COURTESY OF GUILD HALL

When Brianna Ashe first moved to the East End a little over seven years ago, she discovered a novel way to make new friends by merging two of her favorite things — art and beer.

“All I need is a Sharpie and a napkin,” explained Ashe in early January while sitting at the bar of Townline BBQ in Sagaponack with exactly those two items in front of her — plus, of course, a pint of amber-hued ale.

When asked how this passion for bar art first took hold, Ashe responded, “When I moved here I didn’t know anyone, but I really like beer. Usually, at a bar people are either doing their own thing or socializing, so I would go to various bars and just draw and drink. Sometimes I’d have just one beer and sometimes I would take a taxi home.”

And before long, Ashe found that the sessions were beneficial, both to her psyche and her social life.

“I was able to ground myself. It was meditative and I’d do it two or three times a week. I also did it in college,” said Ashe, 29, who grew up near Springfield, Massachusetts and earned an art degree from the University of Massachusetts Amherst. “For me, it was a way to hopefully meet people, learn about the people in the community and try all different kinds of beer.”

And when it comes to favorite places to drink and draw on the East End, Ashe has found an ideal spot in Townline BBQ.

“I love the napkins here,” she said, noting that the texture of the restaurant’s paper napkins absorbs the ink from Sharpies particularly well. “I also like the space here. Sometimes it’s really dead and sometimes it’s packed. I love the bartenders and the beer at Townline, and they rotate the beers fairly often.”

As she spoke, Ashe began drawing a black and white checkerboard-like cube on a napkin, eventually surrounding the image with the words “Two Sides to Every Story,” an obvious, if subtle, reference to a heated political debate that was taking place a few stools away.

“Now that people have seen me at the bar, I’m called the Town Colorer,” she said.

In addition to making new friends with her talent, Ashe has also developed something of a following through “Drink and Draw With Me … (Bri Ashe),” a program sponsored by Guild Hall in which she meets up with participants at Townline BBQ on the third Thursday of each month to do exactly that. Along the way, participants have the opportunity to meet new people, discuss their day and create art together.

The next “Drink and Draw” is coming up on Thursday, February 20, and Ashe said she will bring all the necessary art supplies — pens, pencils and markers — needed and will also provide some uncommon surfaces to draw on including coasters, receipts and, of course, those fabulous napkins. All you have to do is bring your imagination (and a designated driver if you think it might come to that).

Guild Hall’s drink and draw sessions began at Townline a few months ago, and Ashe, who had no preconceived notions of who might come to the event, found that participants have ranged in age from mid-20s to 70s, with most in the 25 to 40 range. They’ve included people who make art on a daily basis and others who don’t make art at all.

“Some thought it would be a class, but this is not a class,” Ashe said. “It’s $10, and you have access to happy hour prices. I’m giving you materials and surfaces to draw on, or you bring your own.

“I want it to be a free time to socialize, or sit in the corner with headphones on,” she added. “I’m not here to work the room or teach you paint by numbers. I want to be on the same level and make things.”

That doesn’t mean there isn’t an end goal for these artists or their work. Ashe makes an effort at the end of every drink and draw session to collect one piece of artwork from each participant. She’s hoping to one day organize an exhibition of drink and draw doodles.

“It’s about finding the right venue and a way to hang them,” said Ashe. “There’s also a cool simplicity about this idea. I love that it could catch on and go on to other cities.”

Drawing at bars has definitely been a way for Ashe to spark human interaction and when asked how she and her napkin artworks are perceived by others, Ashe said, “You meet a lot of different people. Some are really intrigued by what you’re doing, others peek over your shoulder and don’t involve themselves. Others are really outspoken and want to talk.”

While she’s happy to engage in conversation, Ashe is careful to sidestep controversial subjects. This is an election year, after all.

“I try to stay neutral at bars because it can be a volatile place sometimes,” she said. “I can get riled easily after a couple drinks and have a heated experience, but that’s not what this is. This is to ground me … this is an avenue to create work I may want to do on a larger scale. On a lot of them, I’ll write on the back about where I was when I did them.”

And in terms of making friends, after seven and a half years on the East End, you could say that drinking and drawing has helped Ashe on that front as well.

“I do have a group I’m comfortable with — creative people — but there’s no competitiveness,” she said. “We bounce ideas off each other and care about each other. I like that and I’m grateful for that.”