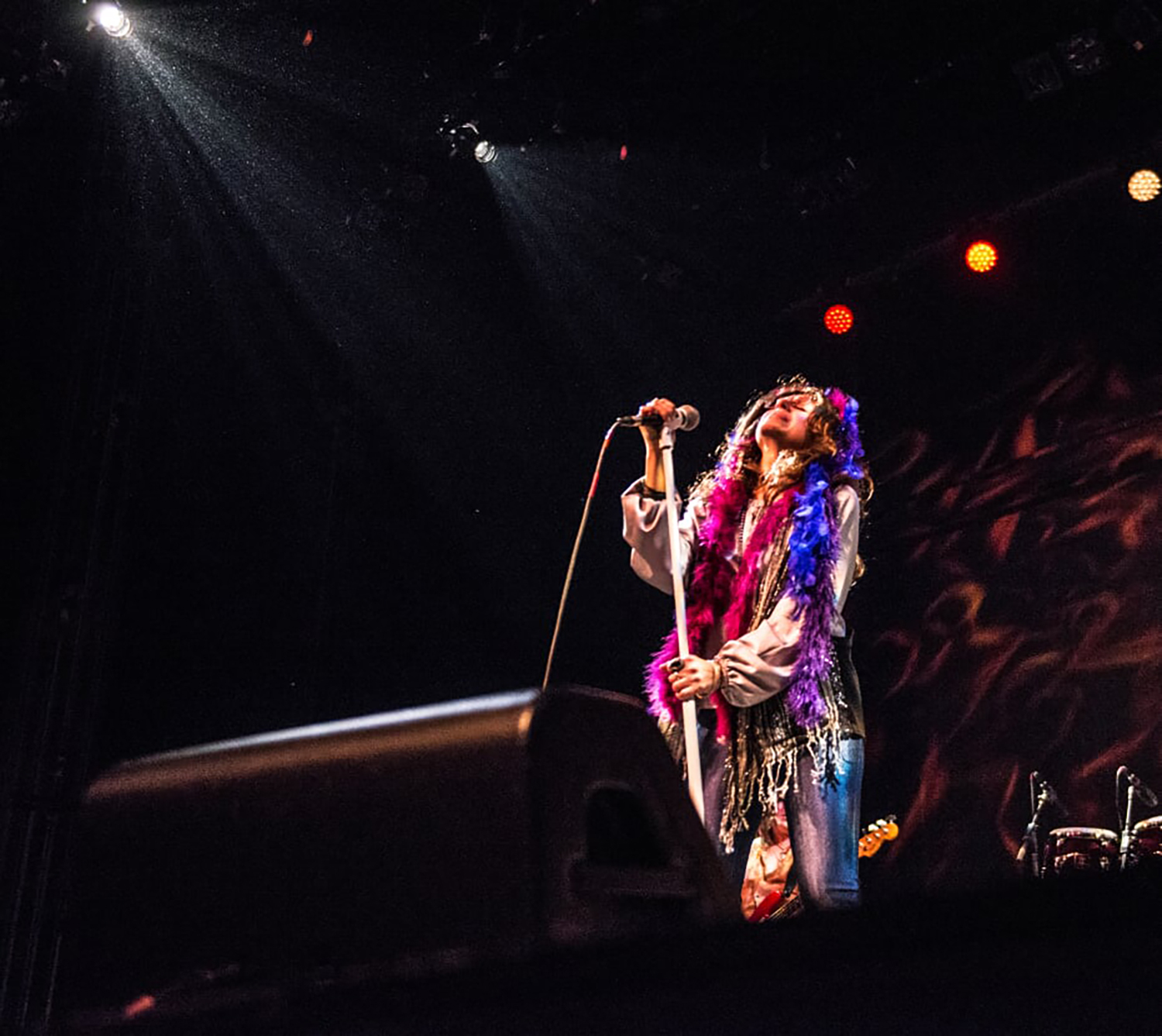 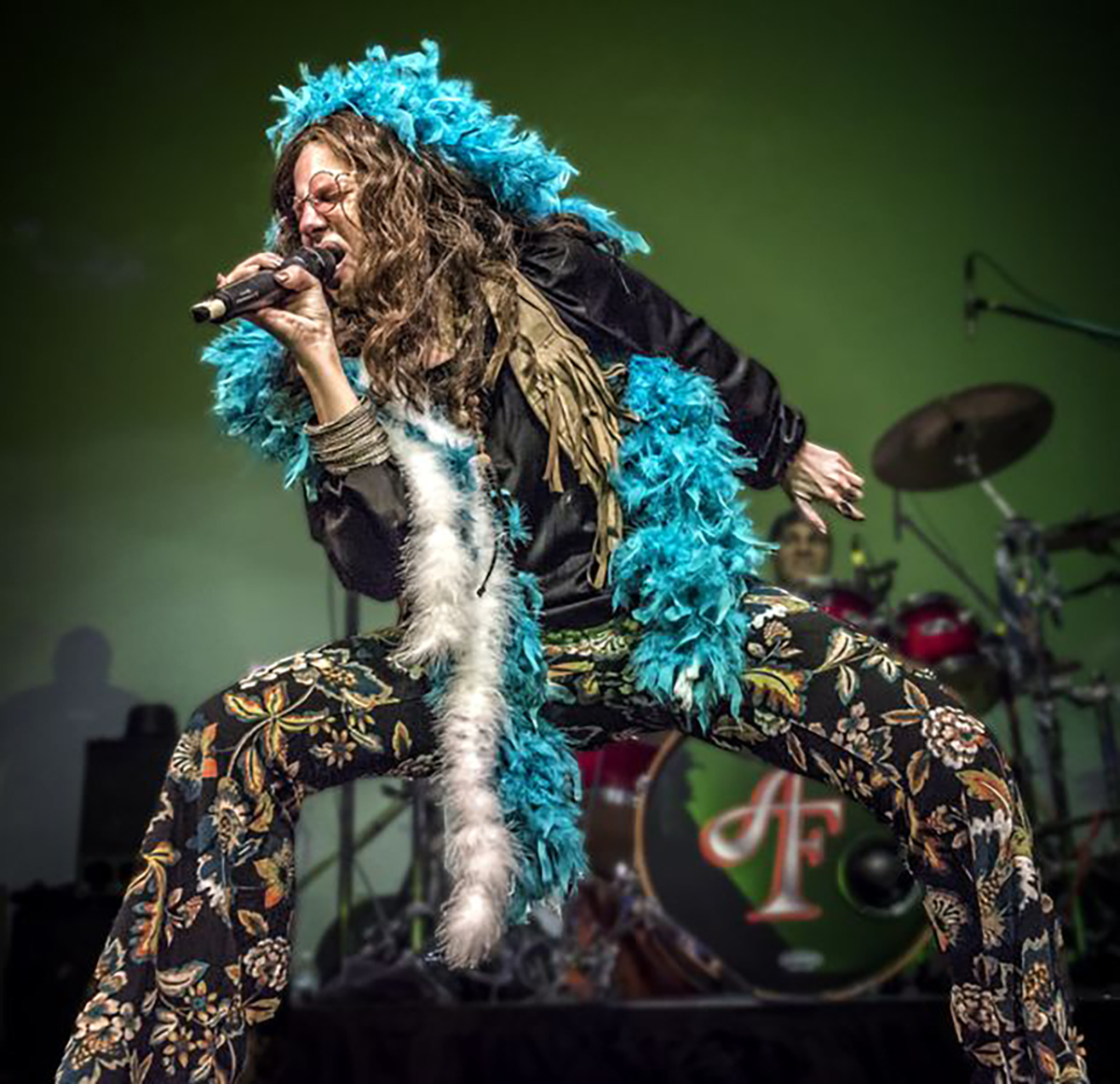 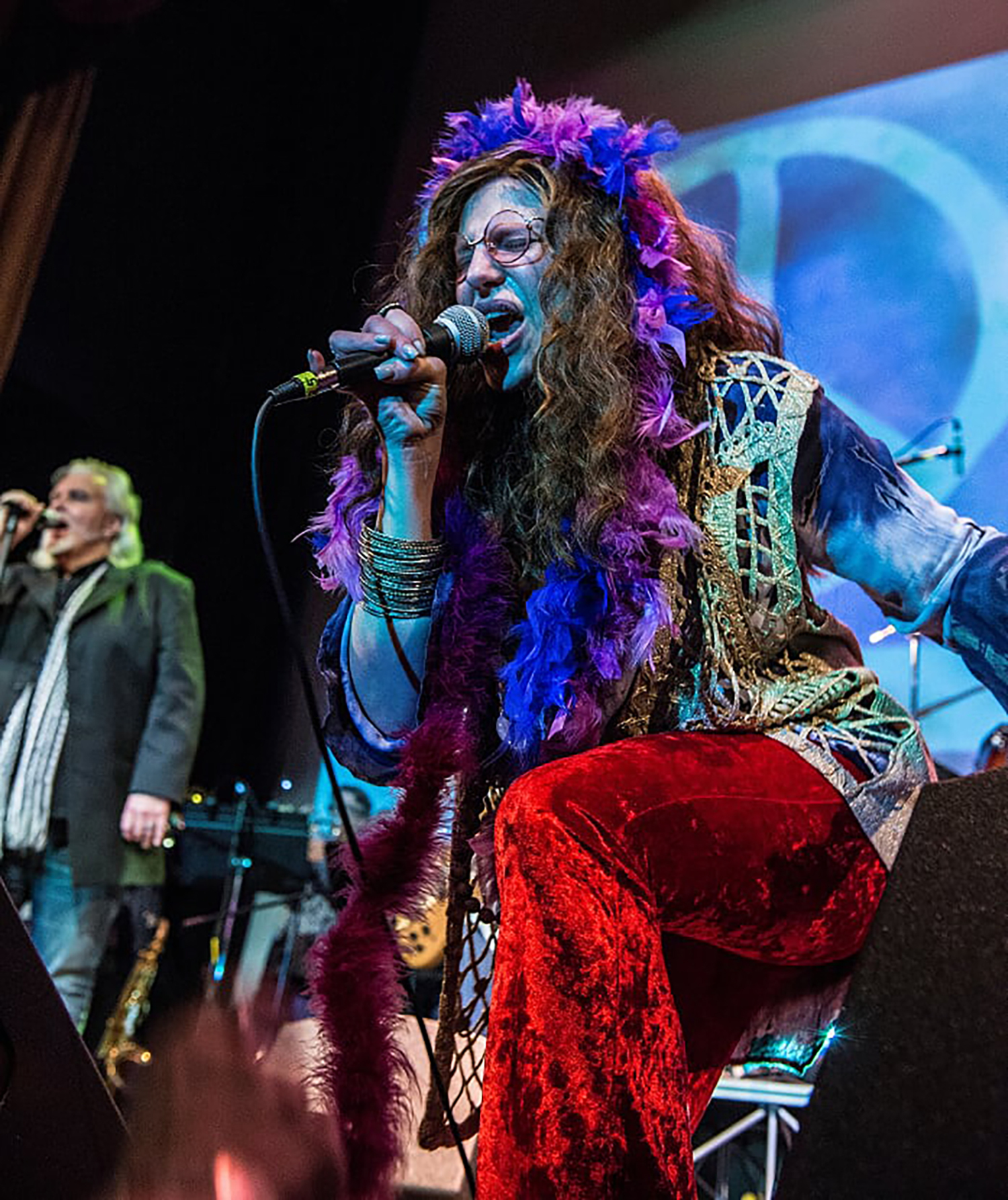 The show was formed by coincidence in 2005 during Ellen Michelmore’s production of “Woodstockmania” at Theatre Three in Port Jefferson. As her vocal coach and close friend, Michelmore approached lead singer Amber Ferrari to cover the music of Janis Joplin, and, following terrific acclaim, the band was born.

Part concert experience, part dramatic theater production, “Joplin’s Pearl” takes the music of Janis Joplin to an entirely new level, with a nine-piece backing band, authentic attire, and enough heart and soul to bring us all back to the Summer of Love.

Known for her vocal range, songwriting, and theatrical presence, Ferrari has performed alongside such notables as Richie Cannata, Randy Jackson, and Bobby Rondinelli. Her tribute performances of music by Janis Joplin, Madonna, and Pat Benatar are showcased in three ongoing shows, “Joplin’s Pearl,” “Material Girl” and “Benatar.”

From August 1 through Labor Day, September 7, the Artists Alliance of East Hampton (AAEH) will present its inaugural virtual show, “Colors of Hope.” Taking inspiration from the pandemic, 37 member artists have created works to commemorate the unusual times in which we live. Whether their entries chronicle personal concerns or provide a tranquil respite from anxiety, their carefully-chosen works express an extraordinary moment in history when social distancing becomes intimate engagement. As catalysts in this time of isolation, their accomplishments empower all of us to reflect more deeply, immerge stronger, and impact our evolving society with passion, commitment, and ... 14 Jul 2020 by Staff Writer

Claude Lawrence’s Works From the Estate

Keyes Art Gallery opens “New Works From the Estate,” an exhibition featuring the work of Claude Lawrence, on Friday, July 17, from 7 to 9 p.m. Born in 1944, Lawrence is a product of South Side Chicago — a city that was on the forefront of the civil rights movement with its burgeoning arts, music and cultural scene, and jazz clubs of international repute. He picked up the tenor saxophone as a high school student and, after playing the Chicago jazz club circuit, in 1964 he set his sights on New York. It was the first of his many moves ... by Staff Writer

Take a Ride on Spaceship Earth

On July 15, Hamptons Doc Fest founder/executive director Jacqui Lofaro added access to the first-run documentary film “Spaceship Earth” on the hamptonsdocfest.com website. Directed by Matt Wolf, “Spaceship Earth” (2020, 115 min.), almost like a science fiction film, tells the visionary story about an historic experiment involving eight men and women who built and in 1991 quarantined themselves for two years inside a giant, pyramid-shaped glass replica of the Earth’s ecosystem, called Biosphere 2, in New Mexico. Then something happens to the group that threatens the entire project. Wolf gathered 600 hours of archival footage about the experiment and was ... by Staff Writer

McGuire And Morfis At Grenning Gallery

The Grenning Gallery’s newest exhibition features the work of Tim McGuire and John Morfis. McGuire returns to the Grenning Gallery at a precipitous moment in his artistic career. Within this new body of work there is ample evidence of McGuire’s deft classically trained hand, but more importantly, the witnessing of a blossoming confidence as he claims the canvas as his own kingdom. McGuire was classically trained at The Florence Academy of Art, and also a regular workshop teacher who has recently moved to Nova Scotia to paint full time. He was a perennial student and teacher before he decided nine ... by Staff Writer

Inside the Artist’s Studio

“I have been photographing artists’ studios for several years in various parts of the world,” said East Hampton artist Daniela Roman. “Lica Roman, my mother was a painter/engraver, and I spent my childhood near her studio. That place, at the back of the garden, was magical for me. I was not allowed inside, except to pose, sitting very still on a chair. But everything attracted me like a magnet.” Roman has been photographing artist’s studios around the world for the last 11 years. In 2019, she began creating layered portraits of East End artists inside their workspaces. The Amagansett Free ... by Staff Writer

Mark Humphrey Gallery Celebrates Founder With A Show Of His Work

Mark Humphrey, a visual artist and Southampton gallery owner, died at the age of 71 ... 12 Jul 2020 by Staff Writer

Alone Gallery's “Spotlight 3” exhibition, on view from July 14 to 26, features paintings by ... by Staff Writer

In recent years, every summer on the East End brought with it an art fair ... 9 Jul 2020 by Cayla Bamberger