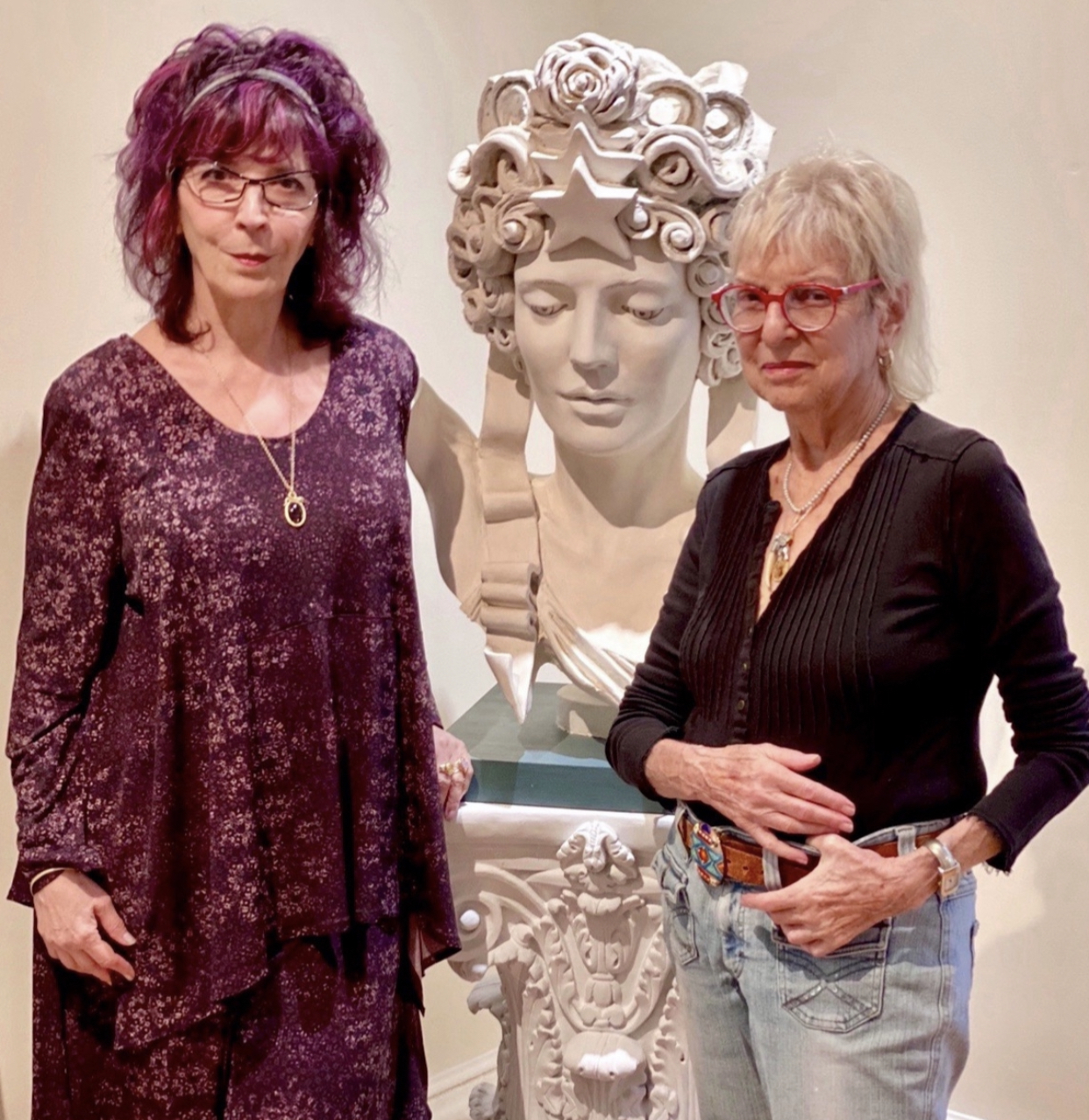 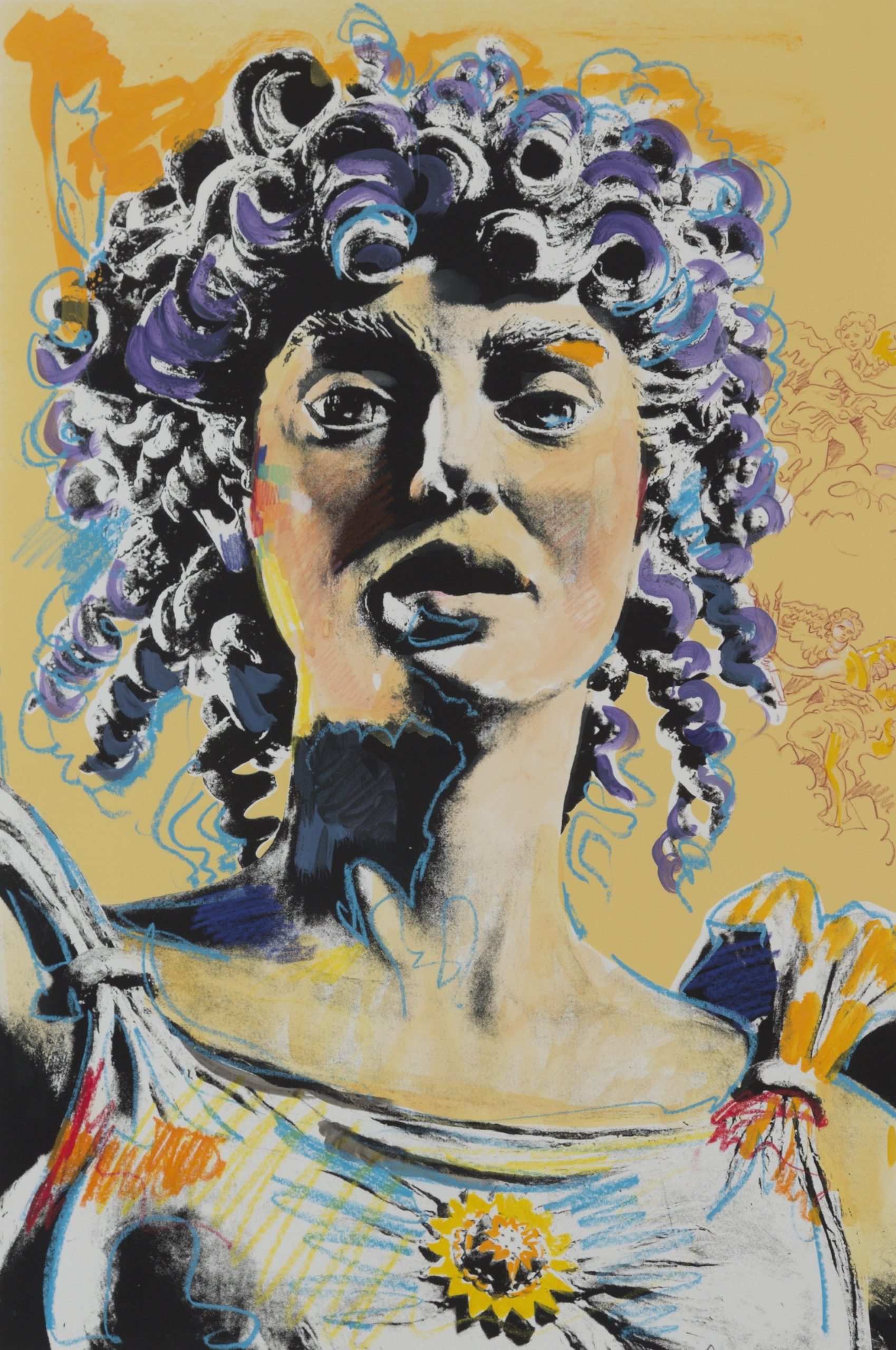 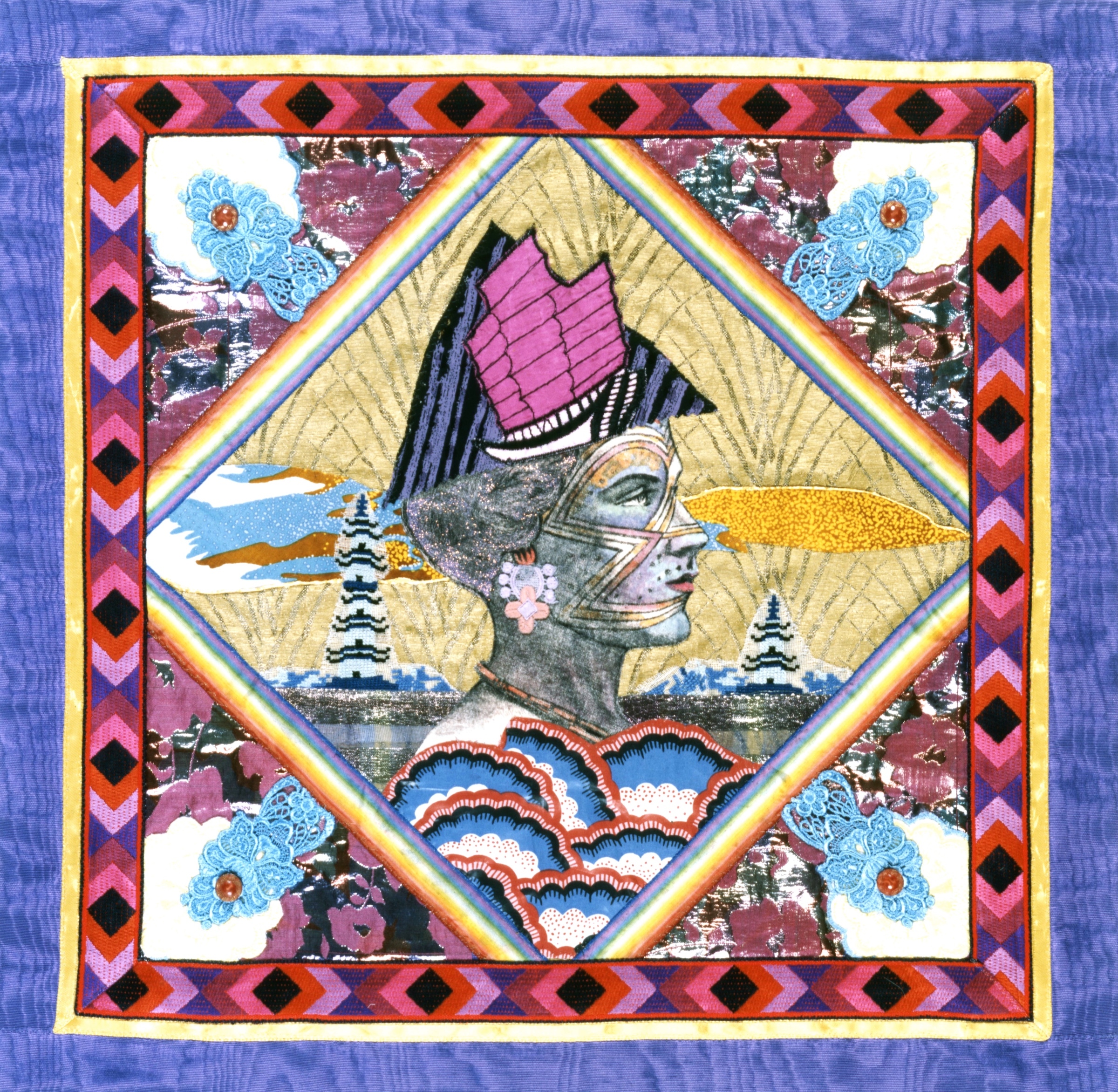 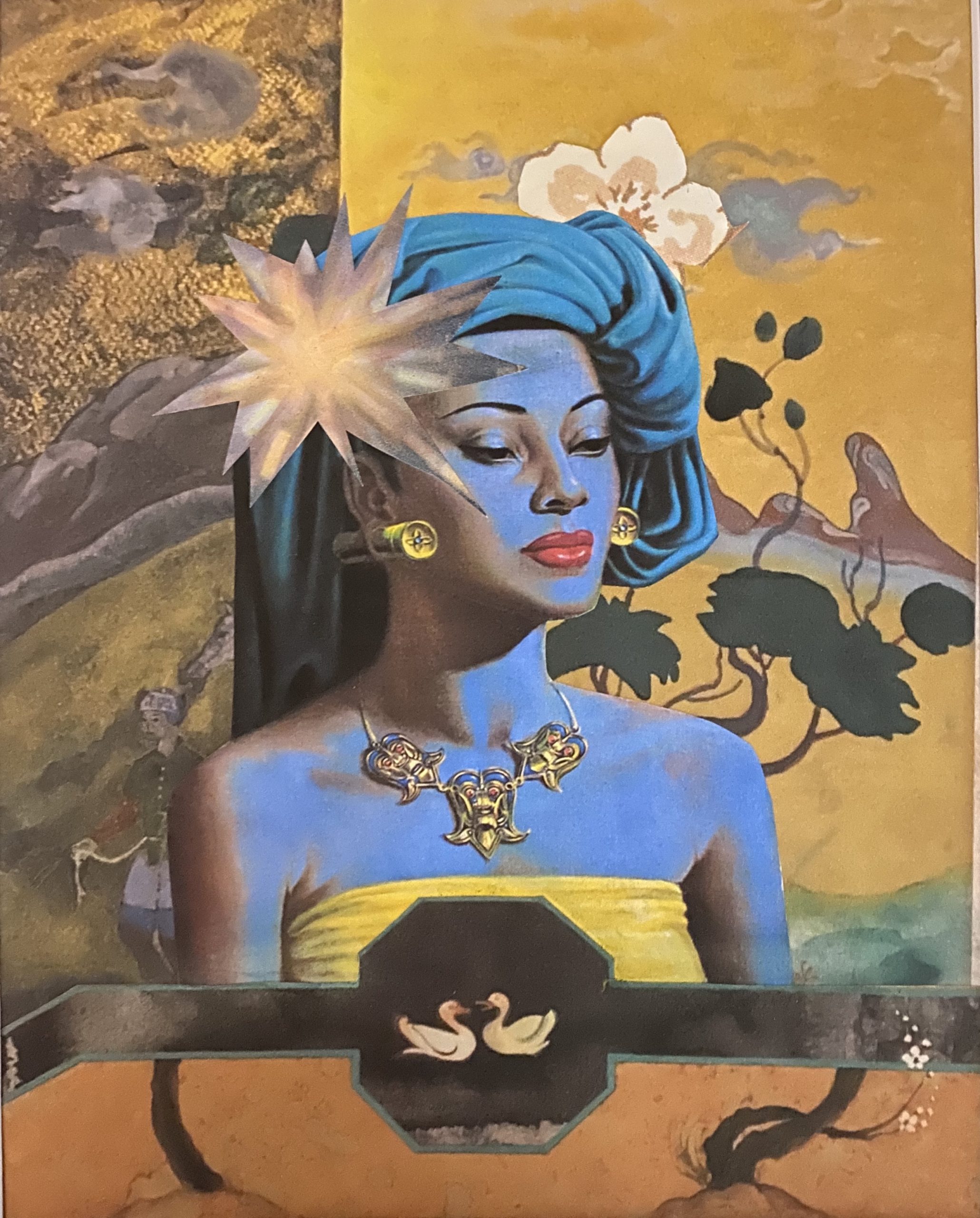 "The Alchemist" by Amy Zerner. 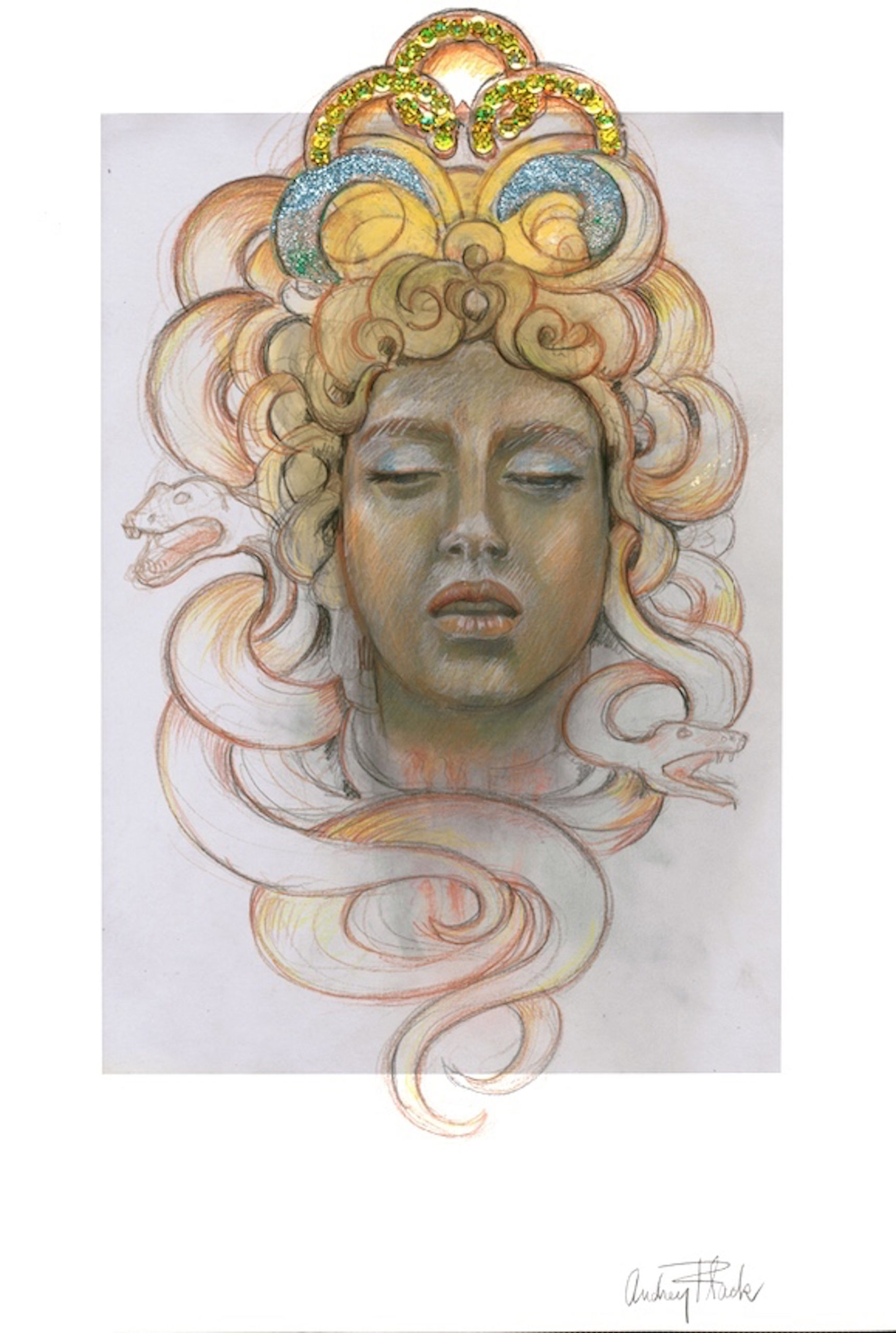 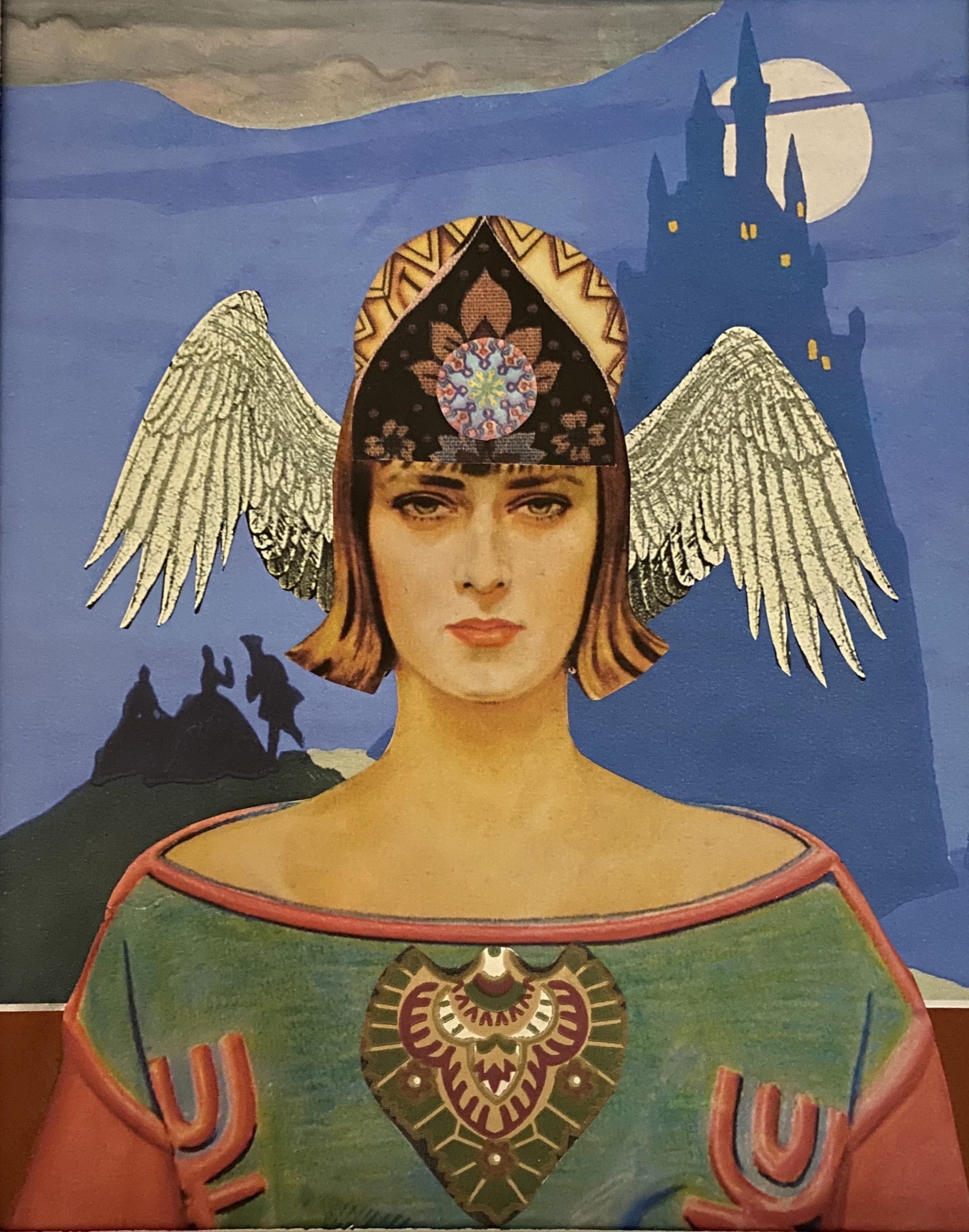 Given what’s going on in the world, it seems somehow poetic that just two weeks before the opening of Amy Zerner’s new art exhibition at MM Fine Art in Southampton, Supreme Court Justice Ruth Bader Ginsburg would pass away.

That’s because Zerner’s art is centered on goddesses and is imbued with the spirit and energy of strong feminine power, just like Justice Ginsburg, who was arguably this country’s most powerful living female icon.

Besides paint and paper, Zerner also incorporates various fabrics, including lace into her work. Lace was the same material that Justice Ginsburg frequently chose to wear as a collar over her court robes. It’s a substance that speaks to femininity, while simultaneously exuding strength. In the days since Justice Ginsburg’s death on September 18, a simple circle of lace has become a defining symbol, not only of her soft-spoken power but also a testament to her long battle for equal rights. In homage to Justice Ginsburg, someone even placed a lace collar around the neck of the “Fearless Girl” bronze statue that defiantly stands outside the New York Stock Exchange in lower Manhattan.

That’s just the way goddesses work in the universe.

“Goddesses Here & Now,” opening October 3 at MM Fine Art, is a two-woman exhibition featuring work by Zerner and her longtime friend and renowned artist Audrey Flack. While there had been talk of canceling the show due to the pandemic, Zerner notes that ultimately, the decision was made to forge ahead.

“We all agreed to keep the show going. The gallery had a couple openings recently, it’s a nice space where you can socially distance. I even designed some masks as an accessory,” said Zerner, who lives in Springs with her husband, Monte Farber.

The COVID-19 pandemic, of course, has thrown the whole world into disarray, but for Zerner, who is kept busy much of the year designing her Spiritual Couture clothing line for Bergdorf Goodman in Manhattan, it’s offered opportunity as well.

“Since January, I’ve made a whole series of goddess paper collage paintings,” she explained. “Bergdorf’s is closed. I’m usually planning pieces for them, but it was a blessing in disguise. I’m focusing on experimenting and coming back into this art form and it’s kind of flowing effortlessly.”

Zerner’s new artwork depicts archetypal goddesses such as the nurturer and the empath, as well as sacred sanctuaries and secret gardens. When asked what guides her when creating her goddess figures, Zerner likens the process to channeling, explaining that they come from somewhere deep within.

“I don’t plan. I have the intention of making something beautiful and uplifting and I think it becomes a visual diary of where I am,” she explained. “I surround myself with materials — paints, pencils, vintage things. So many of the things I use were made by women — doilies, lace, things I collect. It’s spontaneous and intuitive.

“It’s been very healing for me in such an uncertain, scary time,” she added. “I see those powerful images in myself.”

With all that’s going on externally these days, Zerner finds this is an important time to focus on female energy. She notes that Flack’s paintings, works on paper and sculpture in this exhibition are also centered on the feminine and focus on resurrecting goddesses who have been maligned for centuries — female deities as varied as Medea and Marilyn Monroe.

“I’m showing with Audrey, who I’ve known since the ’70s and who bought my first pieces,” Zerner said. “She always believed in me. She had to break down barriers when women artists weren’t as successful as men artists.

“We’ve had 2000 years of God is a ‘he,’ and it’s evident on so many levels. Men are even paid better,” she added. “Now we need more nurturing and kindness and I think Audrey’s work also conveys the kind of protective energy through these archetypes of female images that are strong.

“We’re honoring our feminine nature. We need strength, healing and all these women.”

The two artists first met in 1978 when Flack approached Zerner at an event and told her that she looked like a Madonna painting she had recently done. They’ve been friends ever since.

“When you have a mentor supporting your work, it’s very empowering,” said Zerner. “Audrey usually doesn’t do two person shows, but she believes in the work and is into reclaiming some of the bad reputation of women who are called ‘bitches,’ because they seem to be strong.

“We’re bombarded with brutality and scary images that we need to counter balance by coming back to what’s real and nurturing,” she said. “We participate in changing the times and that’s the good part of what’s going on now.”

Finding the good in these times of trouble and staying centered and positive by looking within is a guiding principle for both Zerner and her husband. Together, she and Farber have built a thriving business centered in astrology, meditation, and relationship building and they have created a best-selling line of metaphysical books, illustrated oracles, tarot decks and meditation tools that have inspired millions. One of their first collaborative efforts was realized more than a quarter-century ago, when 78 of Zerner’s fabric collage tapestries were reproduced as a set of Tarot cards for “The Enchanted Tarot.”

Recently, the couple began offering “Ask the Oracles,” a free Zoom show in which they discuss psychic energy and cosmic trends. Zerner acknowledges that this time of strife offers a time of reflection and rest as well, and she finds that more people than ever are reaching out in search of advice and guidance.

“We’ve seen an upswing. That’s one of the reasons were doing our Zoom show, telling how you can tap into your intuition,” Zerner said. “Two of our most popular books that have been out for 30 years ran out of print. It shows more people are thinking about ways of self-empowerment in finding answers and guidance.

“When you look outside of yourself, you don’t know who to trust. Hypocritical information is all over. You have to come back to yourself,” she added. “Sometimes, it’s too overwhelming and you feel like you have no say. But you do have a say in making your base secure and practicing self-care. Through creativity better decisions can be made.

“Mind, body, spirit — our work is about wellness, yoga, eating better, breathing exercises. If we do some simple things to alleviate stress, we can make better decisions.”