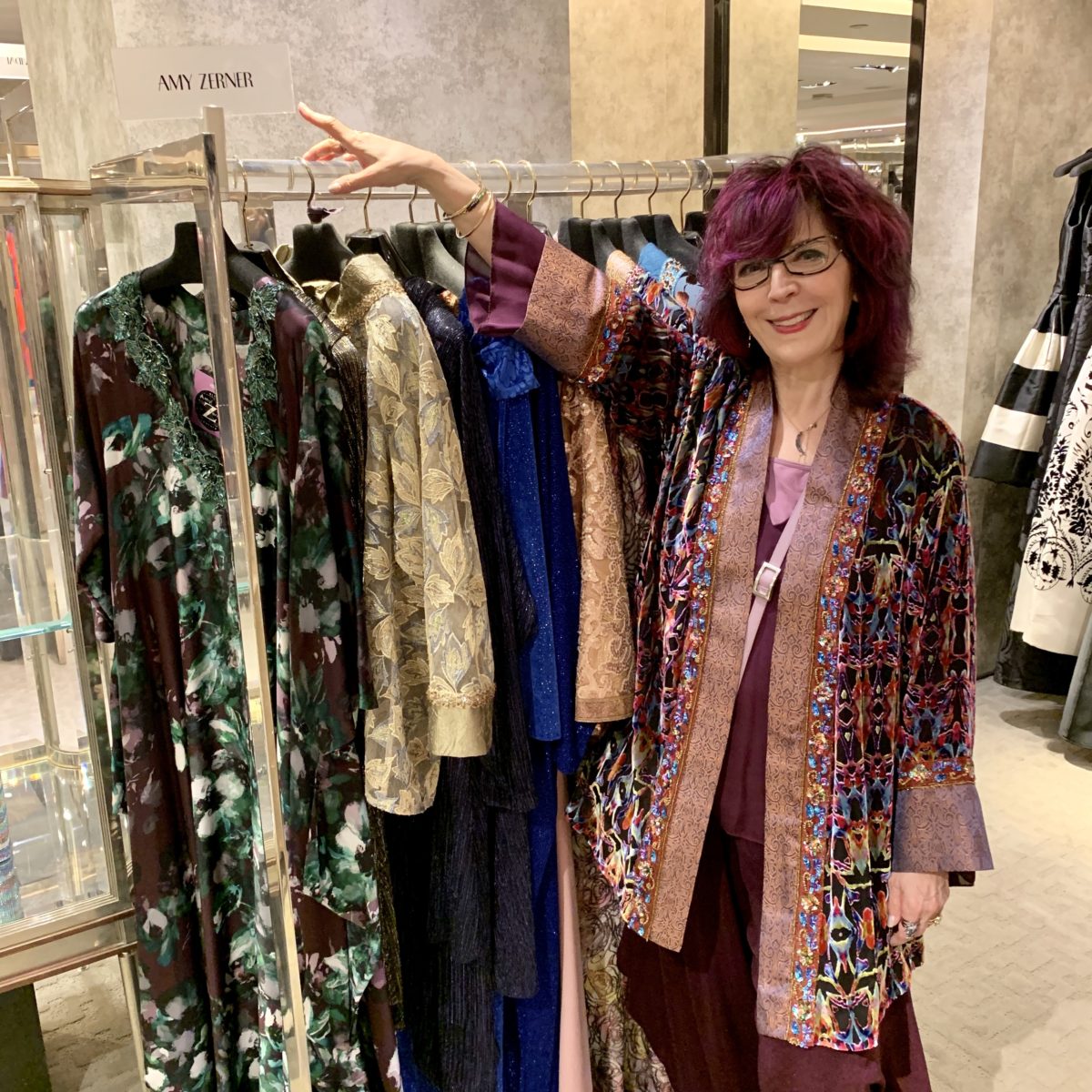 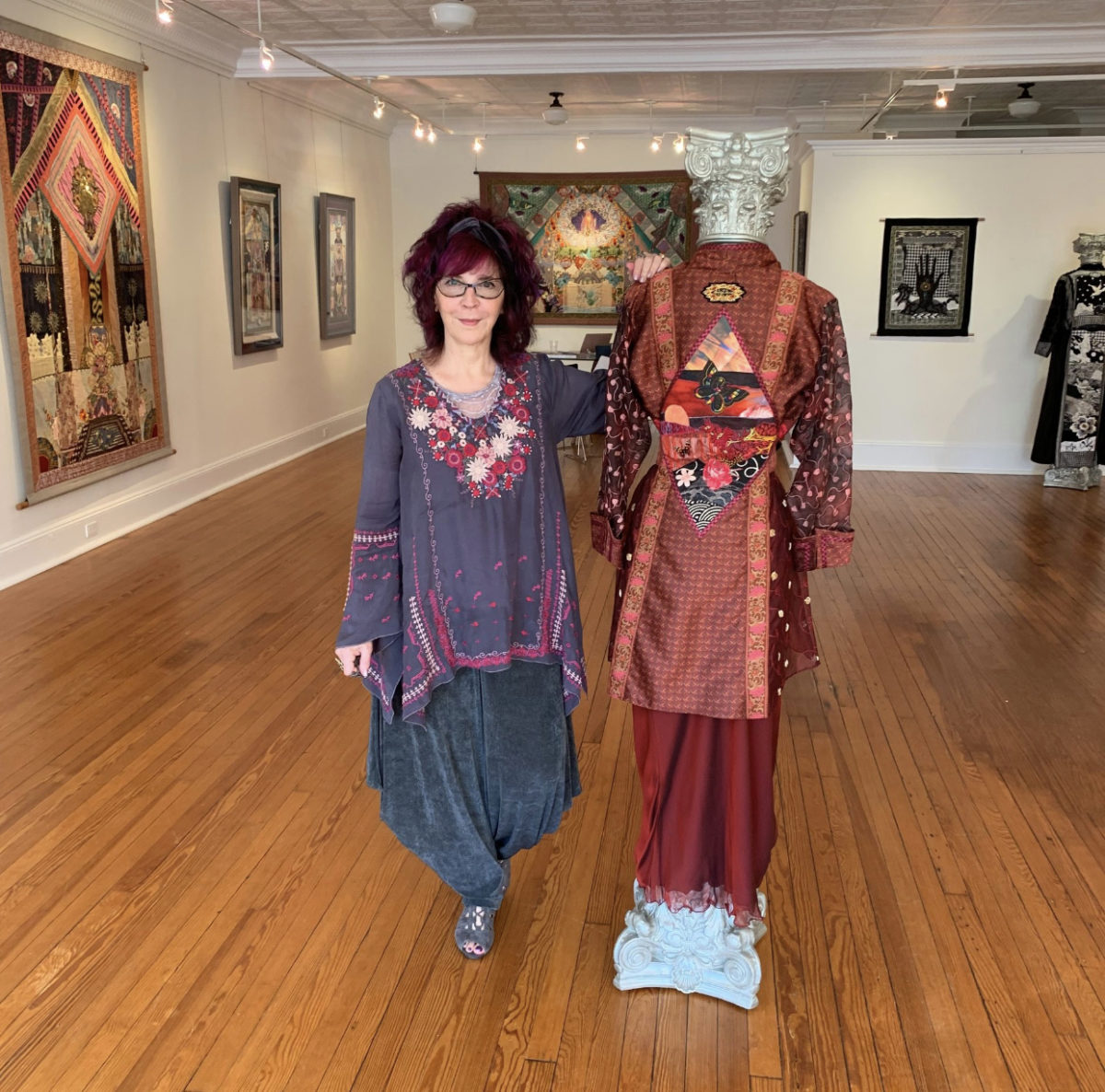 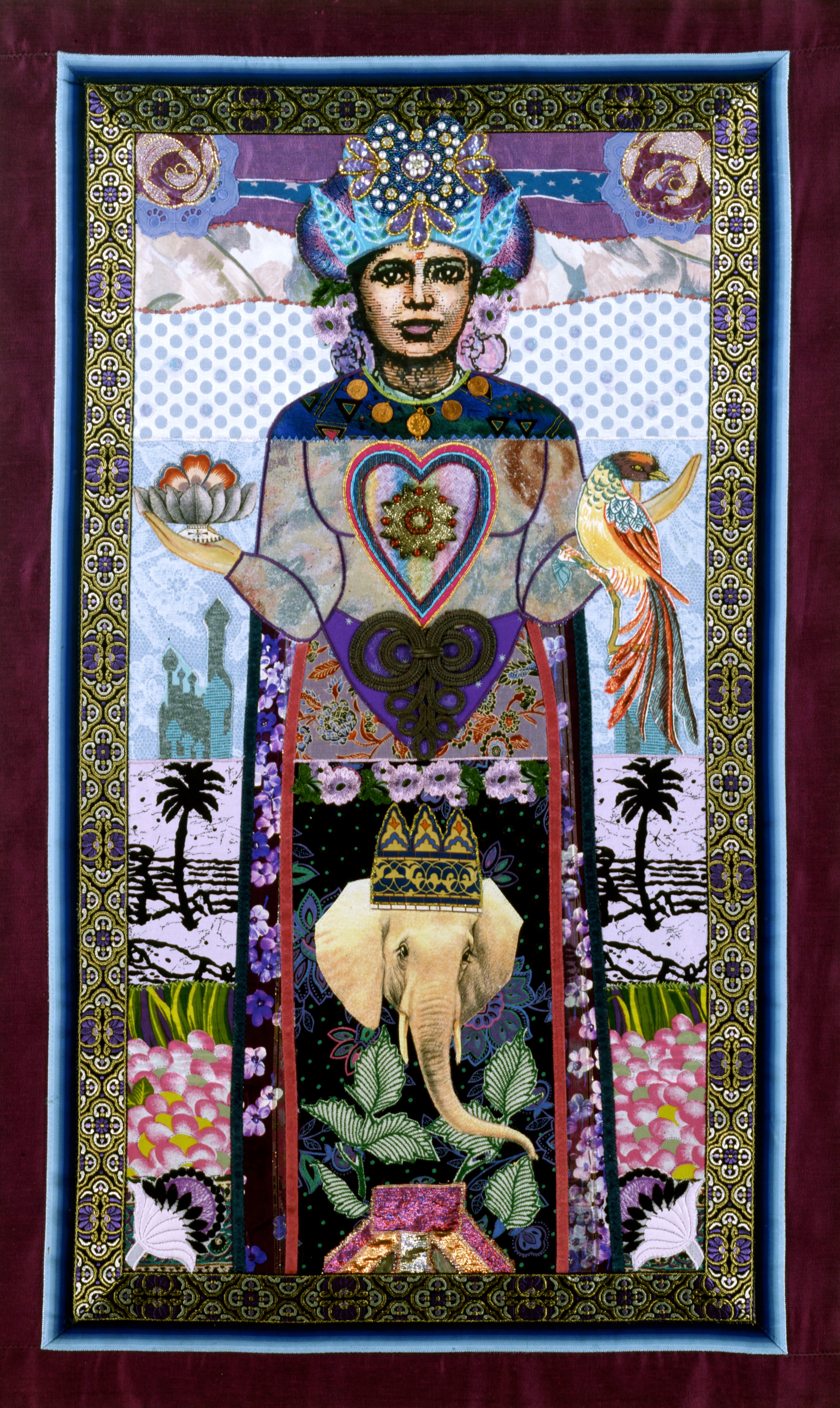 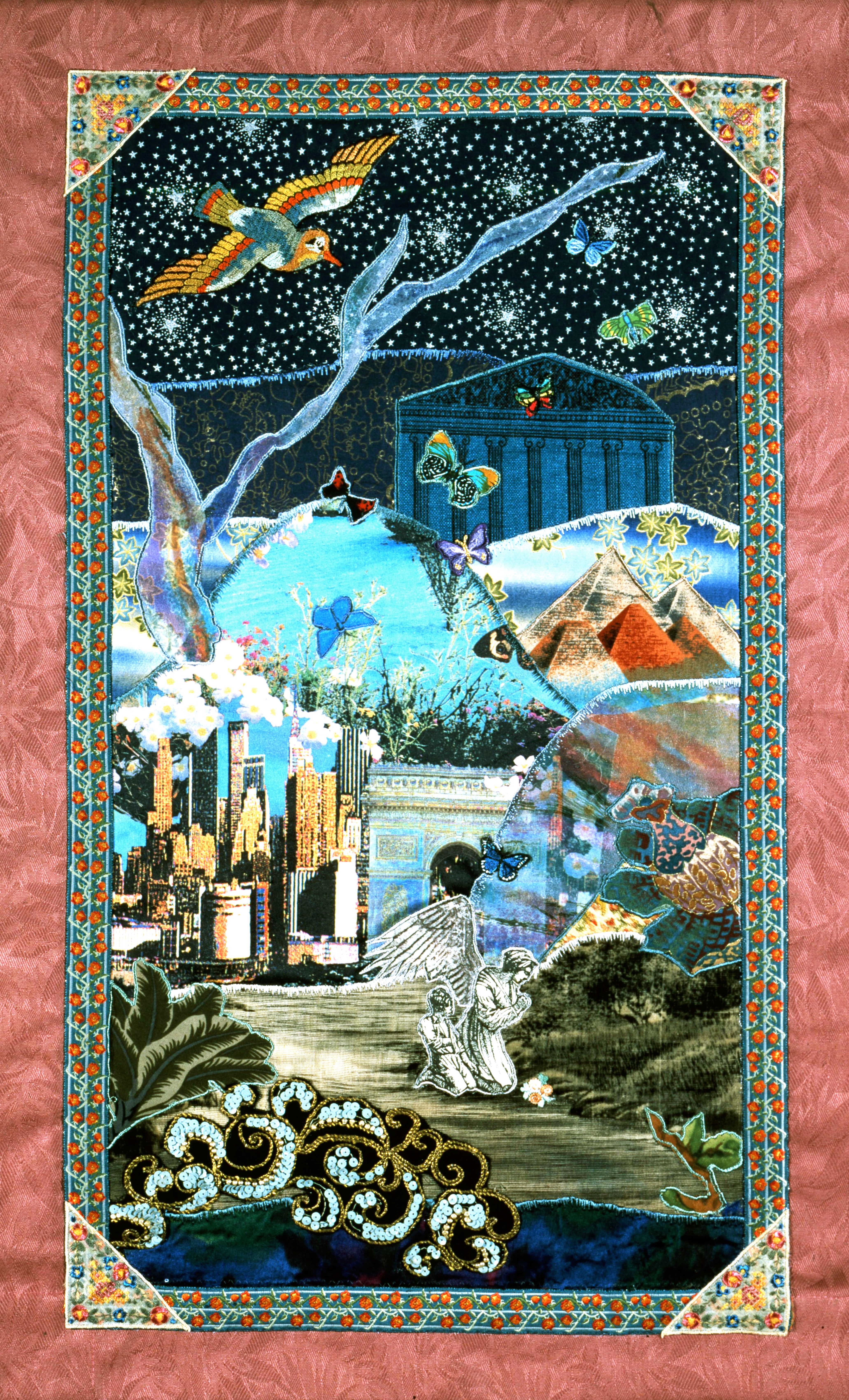 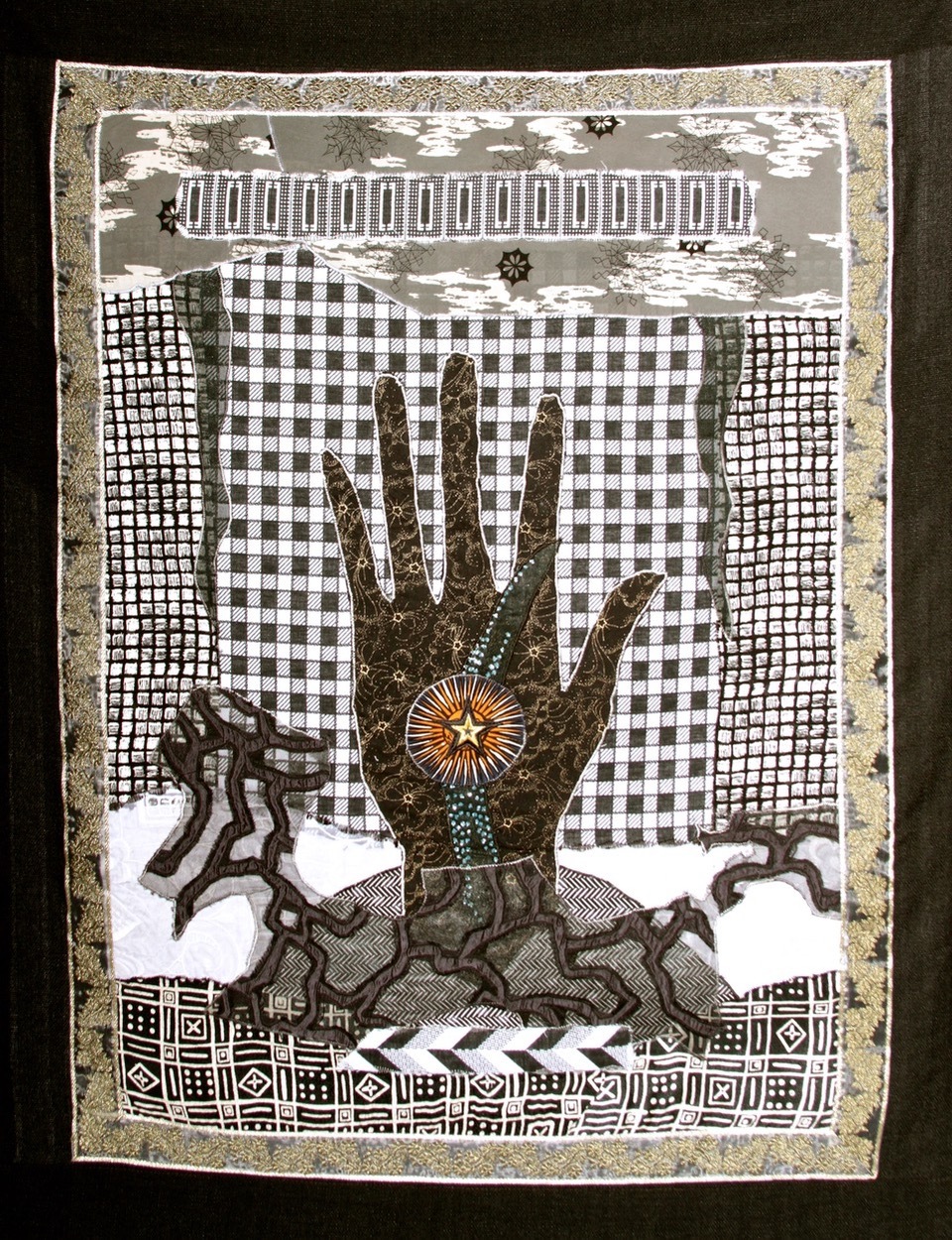 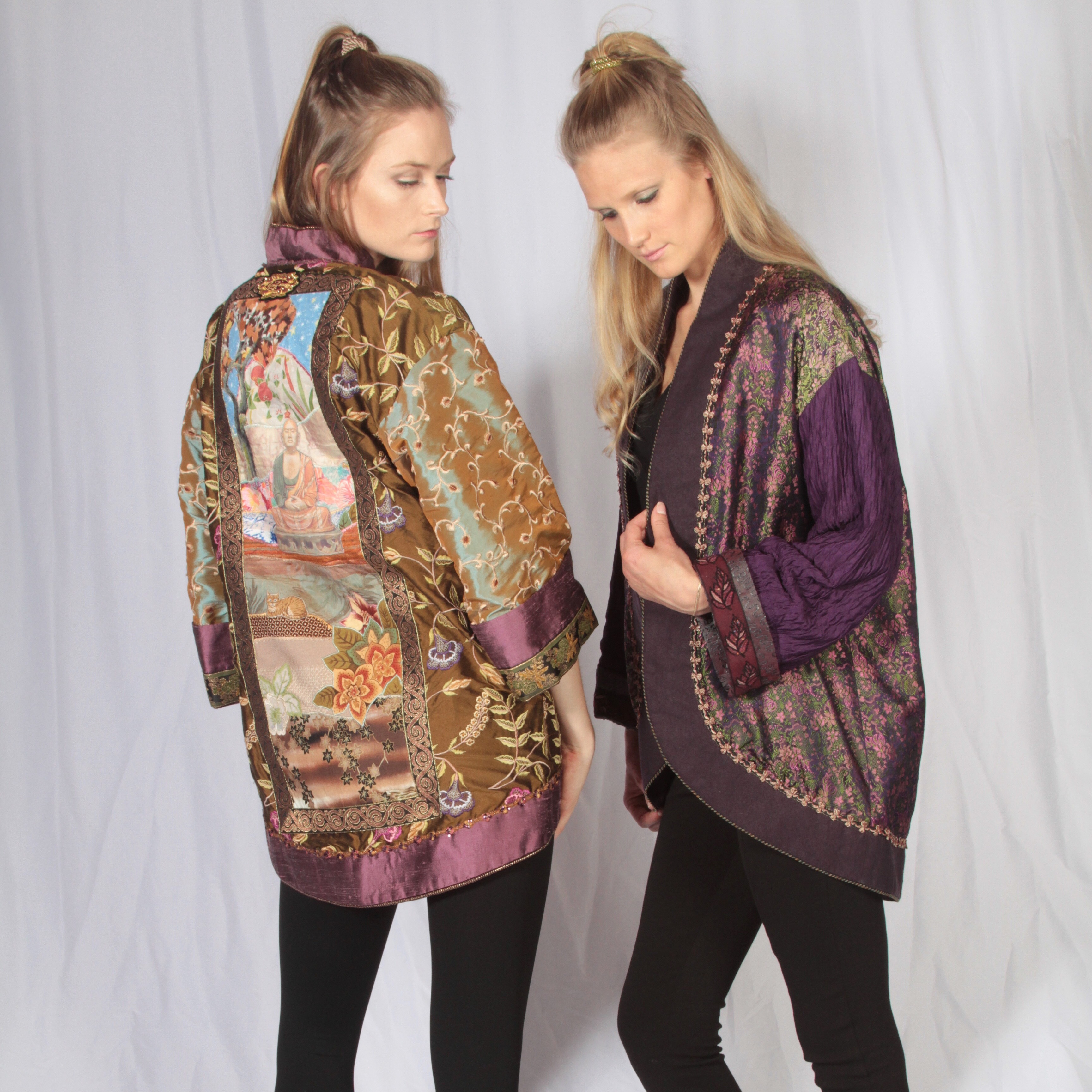 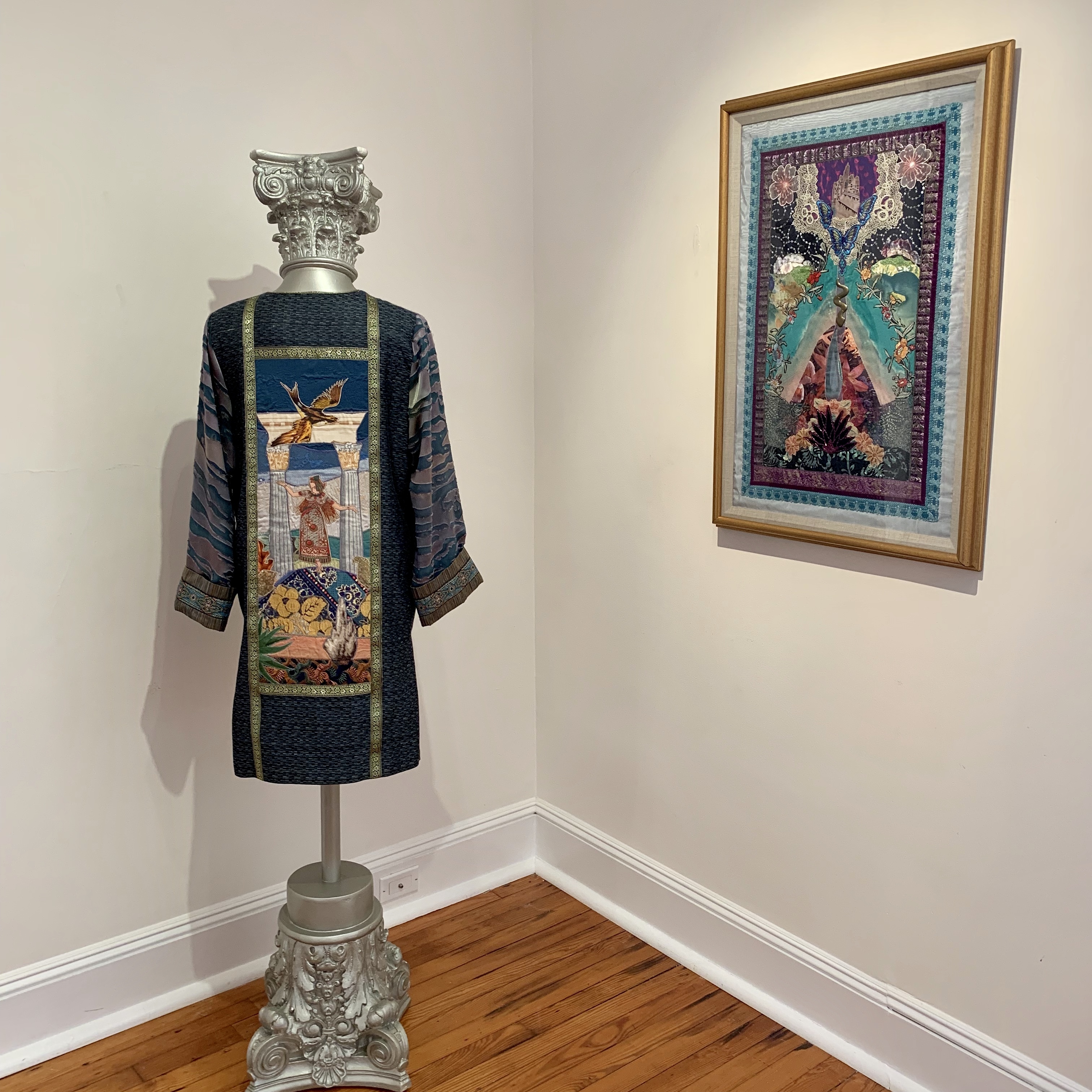 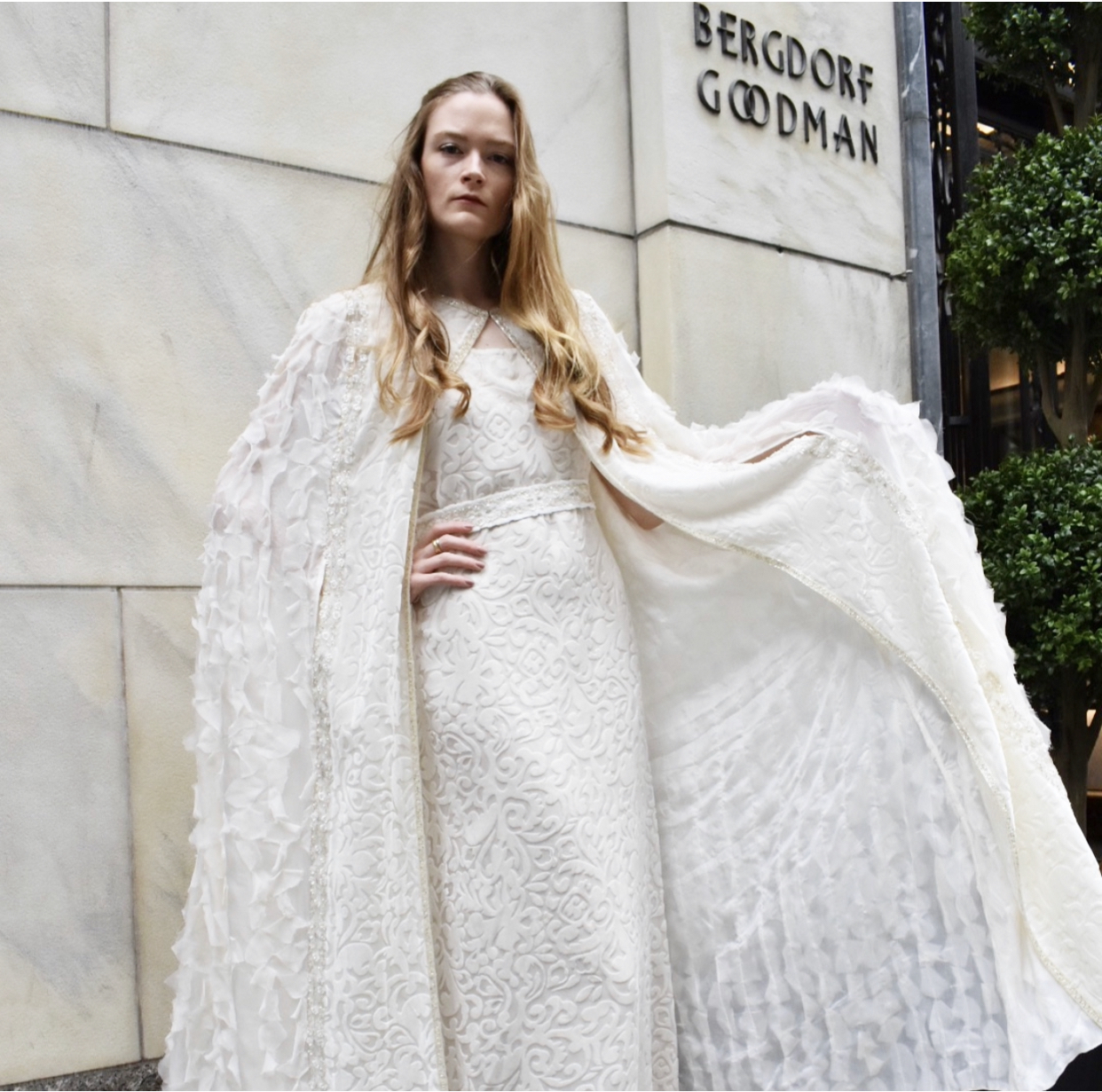 It’s a long way from the quiet streets of Springs to the fashionably high-end department stores of New York City’s Fifth Avenue, but that’s exactly where you’ll find Amy Zerner and her collection of wearable art.

Zerner designs and creates her one-of-a-kind clothing pieces at her home studio in East Hampton, but ultimately, her work is worn the world over by women who are drawn to the timeless styles and powerful energy inherent in her creations.

On Friday and Saturday, November 22 and 23, Bergdorf Goodman will host a trunk show of Zerner’s distinctive couture in the Evening Department on the fourth floor of its flagship store in Manhattan. The pieces in the collection include caftans, gowns, jackets and separates, many of which meld fabric, texture, color and imagery in pieces that tell a story, not unlike the tales embedded in the threads of medieval tapestries from Europe.

But Zerner’s work also speaks distinctly of the ways of women and the important role fabric and fiber has long played in the feminine world. In September, Zerner’s tapestries and wearable works of art were on view in an exhibition at MM Fine Art in Southampton — some pieces remain on view in the gallery — and in a recent interview at her studio, Zerner talked about the origins of her inspiration and how her interest in art led her to clothing design.

“My mother was an artist and so was her father. I grew up with art supplies and making things,” Zerner explained. “I liked making things with markers and crayons. When I went to Pratt [Institute] I was introduced to printmaking and other art forms. I mixed it together and went into my closet and started cutting things.

“I like to do my own things,” she adds. “It’s been an exploration of that technique — painting with a foundation of adding onto it, drawing and doing figures. You have to master the fundamentals, then go off and find your own path.”

Much of Zerner’s path has been defined through the similar passions of her husband, Monte Farber. The couple met 45 years ago at a rooftop party and together, Zerner and Farber have built a thriving business centered around their interest and talent for astrology, meditation, psychic readings and relationship building.

One of their first collaborations utilizing Zerner’s talents for fabric came more than 25 years ago with the creation of “The Enchanted Tarot,” 78 fabric collage tapestries that were reproduced as a set of Tarot cards.

“I thought, what a great way to get my work out there,” Zerner said.

Zerner began selling her wearable artwork — aka goddess couture — at Bergdorf Goodman back in 1999. She started with six pieces, then received an order from Neiman Marcus for 50 garments. From there, she began producing different styles and sizes, working with women on custom items. Her clothing, which can sell for up to $6,000 per piece, has been collected by Oprah Winfrey, Patti LaBelle and Shirley MacLaine. She notes that a Saudi Arabian princess once bought 79 of her caftans.

“Now, I’m only at Bergdorf … on the fourth floor,” said Zerner, explaining that she has a rack of 12 or so pieces with another 20 or so kept in a stock room.

The attraction to her work is obvious and speaks to a connection that runs deeper than most people experience with what they wear. In making her art tapestries and clothing, Zerner explores a range of stories and imagery related to nature, the elements, or even deities from Native American, Asian, African, European and Middle-Eastern cultures — which may explain why her wearable art pieces have such wide appeal.

“Sometimes I work in series, like air, fire, water, earth and ether,” she said. “I like the spontaneity of what’s going to come out, like a vision. My palette is bits and pieces of fabrics used as sky, trees or animals. I work on the floor and in a trance-like state, make the landscape of the soul until I get it right.

“Then there’s another process of disassembling it to really put it together,” she added. “I paint things in. There’s such a mix of what I need to do to get the effect I want.”

While the stories Zerner tells in her pieces have a life all their own, often the very fabrics she works with have a backstory that adds depth to the special quality of each piece. She’s something of a scavenger when it comes to vintage clothing stores and thrift shops. That’s where she finds classic scarves, unusual lace collars or clothing that was handmade by women generations ago. It all becomes material for her art — women’s work, literally recycled and repurposed and given a new lease on life.

“People give me stuff all the time, including christening gowns,” Zerner said. “Nothing’s sacred — but everything is sacred. I also do special commissions that have meaning for people. I like to do a story in the piece when I do that.”

Though her couture appeals primarily to women, overall, Zerner notes that she has had as many men as women buy her artwork.

“I’m an Aries, and being a male sign, the drive behind it is masculine and militaristic in a way,” Zerner says by way of explanation.

Overall, she notes that intuition is the key to her artwork and after so many years, it’s become second nature — from designing tapestries and clothing, to the work that she and Farber do together in the form of books, spiritual tools, and readings.

“A lot of our work is about being mindful, pursuing wellness and destressing,” Zerner said. “To me, the images I make are soothing and meditative. I need that … a sacred place where you can go and be calm and rested.”