An Interview With Joan Copeland - 27 East

An Interview With Joan Copeland 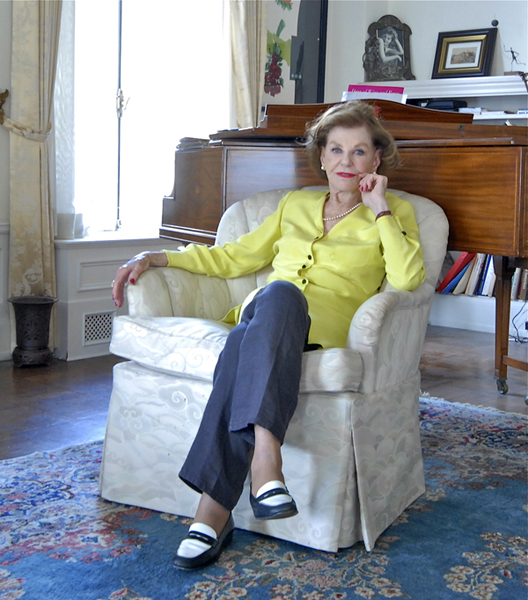 In “The American Clock,” Joan Copeland played her mother in a play written by her brother.

Such a challenge might confuse most actresses, but Ms. Copeland took it in stride. In fact, she won a Drama Desk Award for her performance.

“Arthur didn’t write the part for me but it’s one of the few roles I didn’t have to audition for my brother,” the part-time Amagansett resident said during an interview last month. “I’ve had to audition for several of his plays and he always treated me as an actress, not a sister.”

The brother of whom she was referring was Arthur Miller, who with Eugene O’Neill, Tennessee Williams, and Edward Albee were the greatest playwrights of 20th-century American theater (Mr. Albee, of Montauk, is still producing new work).

Ms. Copeland was born Joan Maxine Miller in New York City to a clothes manufacturer and a schoolteacher. Perhaps from their mother, her brother acquired a love of writing, but a desire to be an actress is harder to explain, she said.

“Maybe on the surface it doesn’t make sense, but I think I would have gone into theater anyway because my interest in acting goes back to when I was a young child, and that was well before Arthur turned to playwriting,” said Ms. Copeland. “I didn’t think of acting as a way to make money. It was a dream, and only crazy people actually put their dreams to work.”

Her professional debut as an actress was in a Brooklyn Academy of Music production of “Romeo and Juliet” in 1945, and three years later she made her Broadway debut in a drama titled “Sundown Beach.”

From that point on, Ms. Copeland worked steadily. Among the Broadway plays she had roles in were “Detective Story,” “Handful of Fire,” “Tovarich,” “The Price” (also by Mr. Miller), “Coco,” “45 Seconds from Broadway” and most recently “Wit & Wisdom,” in which she appeared in 2003.

One might make the assumption that being the younger sister of a famous playwright meant easy access to roles, especially in his plays. Not so, she said.

Unlike for “The American Clock,” with her brother’s other plays she had to audition like everyone else. And sometimes she didn’t get the part.

However, Ms. Copeland recalled, her brother could help in other ways.

“Just the other day I was going through correspondence, and I found this particular letter,” she said. “I was interested in reviving an old Noel Coward play with music titled ‘Conversation Piece.’ I didn’t know how to go about getting the rights. I asked Arthur, who told me he had never met Coward but he would find out where he was and write him a letter.”

“One of the things he wrote in this letter was, ‘You know, as I know, as any writer knows, that what really matters is what’s on the stage, not how close or distant you are from the work. I’m writing this because I think my sister is perfect for your material.’ It was very cut and dried: Arthur believed that as an actress I could do the Coward play. That meant a great deal to me. However, it’s been said that blood is thicker than water, but whoever said it was not a writer.”

Her steady work as an actress included appearing in feature films ranging from “The Goddess” in 1958—which, coincidentally, was loosely based on the life of her sister-in-law, Marilyn Monroe—to “The Private Lives of Pippa Lee,” which she acted in just three years ago.

Ms. Copeland began working in television in the early 1950s, and found plenty of work in such soap operas as “Search for Tomorrow,” “Love of Life” (in which she played twin sisters), “The Edge of Night” and “As the World Turns.” Among many other roles, for five seasons she had a recurring role as Judge Rebecca Stein on “Law and Order.”

She first came to Amagansett in 1957 and ’58 when she made summertime visits to her brother and his famous wife, Marilyn, at the house they rented in Amagansett.

“It was right on the dunes,” Ms. Copeland remembered. “There are people in the area who still remember encountering them. That was my introduction to the East Hampton area. The house I bought there 30 years ago is very close to where Arthur and Marilyn lived.”

Special visits with her brother’s wife were on June 1, the birthday they share.

“My father had the same birthday too, so we would celebrate it together,” said Ms. Copeland. “My mother did the cooking and my father, Marilyn, and me did the eating. She was very alluring. She had a delicacy to her, a vulnerability unlike anyone I’d ever met. If you knew her well, it would not be too hard to get to her. The problem was if you didn’t like her, it was easy to hurt and damage her.”

Ms. Copeland said she is surprised by the enduring enthusiasm for all things Monroe, given that this August it will be a full 50 years since her death.

“Who would ever dream that there would be this enduring fascination 50 years later! I’m reminded of the hold Rudolph Valentino had on my mother and her generation. Now, people whose parents weren’t yet born when Marilyn was a big star are crazy about her, and she wasn’t a big star that long because she died so young,” she said.

Though Ms. Copeland just turned 90, she remains involved in show business. Last year at this time she was preparing for “Joan’s Show” at the Acorn Theater in New York City.

“It went very well, and now I’m working on updating it because every day I think of something better than when I first created it,” she said. “It has a very simple format, a combination of favorite songs and favorite stories from all my years in show business, especially theater. I expect I’ll do it again soon because we’re talking about filming it and releasing it as a DVD.”

A favorite story involves a well-known stage and film star.

“Certainly one of my most memorable experiences was working with Danny Kaye in ‘Two by Two,’ a musical version of a play by Clifford Odets,” which was produced on Broadway in 1970. “For most of the run we were on very good terms, but then he started doing strange things like totally breaking out of character, and he could be adorable one night and unlivable the next,” she continued. “Danny moved beautifully on stage, was extremely talented, and he was a fascinating man, but as the run went on we didn’t know which Danny would show up on any given night.”

The actress still attends plays frequently too. A recent favorite is the revival by Mike Nichols of her brother’s “Death of a Salesman.” Ms. Copeland said that as Willy Loman, Philip Seymour Hoffman “is just wonderful, it’s such a brave performance. And it was brave of Mike to use him because to many people Hoffman would seem too young for the part, though in reality Hoffman is close in age to what Lee Cobb was when the original production was staged in 1947.”

She was there for that opening night, she said, adding that she’s an ardent fan of the play.

“I’ve seen every production of ‘Salesman’ that’s ever been done in New York,” Ms. Copeland said. “None will ever be like the original. It can’t be because the first time is the first time. I remember vividly that when the curtain went down on opening night there was no applause—not because the audience didn’t love it, but because they were too stunned with emotion to react. At that very moment, my brother had changed American theater.”

Out here on the East End, she is a local theater-goer, and has a favorite venue too.

“I love going to the Bay Street Theatre,” Ms. Copeland reported. “The theater itself has such good acoustics and the productions are always fun. And I’ll see anything that has sets designed by Tony Walton. All those years ago, he did the sets for that Noel Coward play. I finally got to do it thanks to my brother’s letter vouching for me as an actress.”